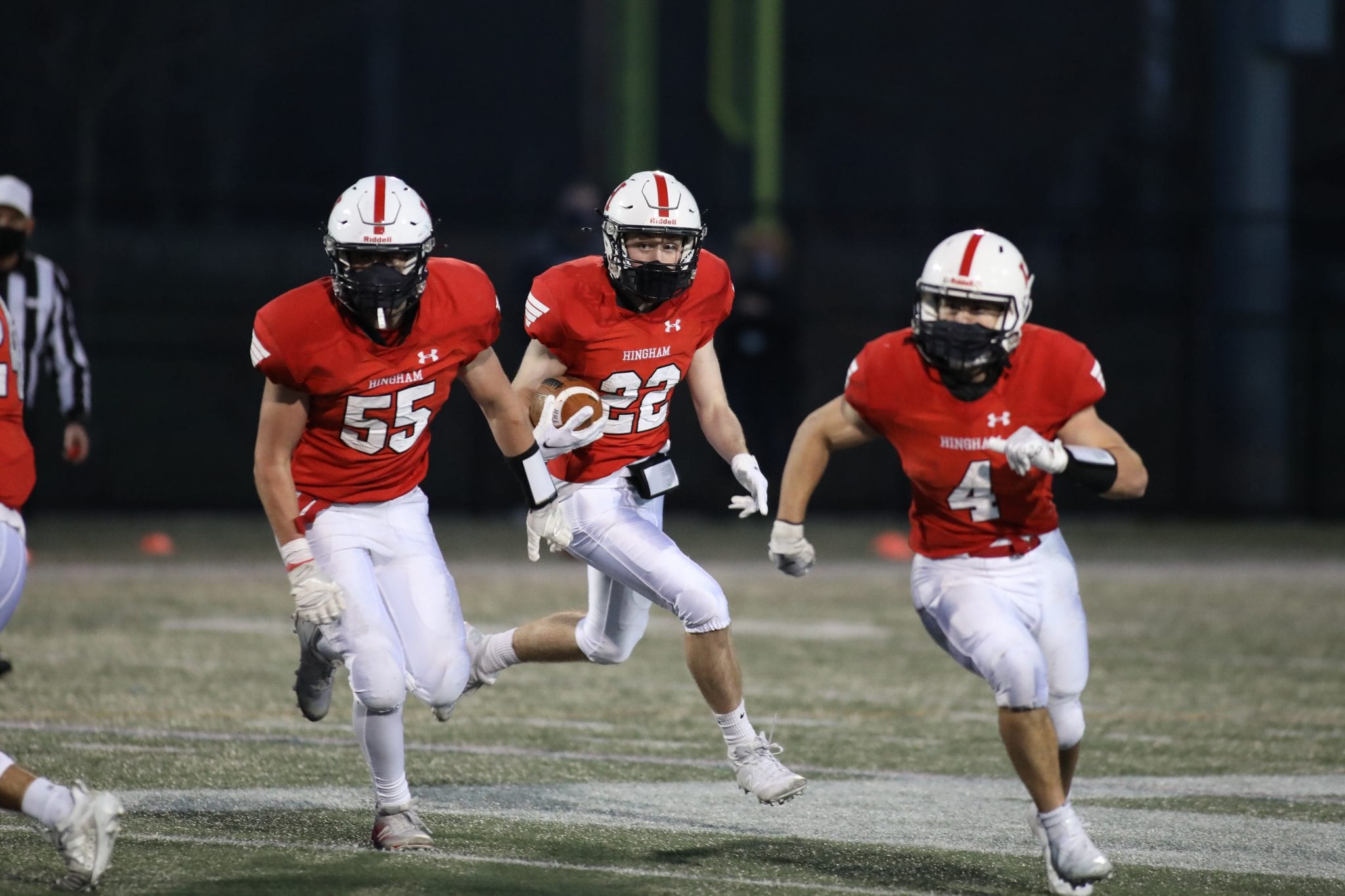 Senior Cooper Estes follows his blockers late in the game as Hingham tried to mount a comeback.

With the sun setting on Friday, March 26th, the Hingham Harbormen took the home field against the Fitchburg Red Raiders. This was Fitchburg’s season opener, and the team had high hopes with new head coach Greg Graham. Hingham was coming off a win over Plymouth North in their season opener the week prior.

Both teams were supposed to play different opponents this weekend. Hingham’s game against Duxbury was postponed due to an ongoing investigation into Duxbury’s play-calling system. The game has not been rescheduled yet. Fitchburg’s planned game against Lancaster was dropped because of COVID-19 protocols. Harborman junior quarterback Dylan Pierce noted the difficulty of changing opponents, “it was a tough game plan week because we were planning for one team that unfortunately didn’t end up happening.” The unpredictability and new preparations made this game one to remember.

The Harbormen put together a strong drive to start the game, collecting first downs on running plays to Cooper Estes and Cian Nicholas. However, Fitchburg caught onto Hingham’s run-heavy plays and forced Hingham to punt.

The Red Raiders then put together a running drive of their own, picking up 33 yards from junior Anthony Oquendo and quarterback sneak plays by Montgomery Graham. The drive ended with an 18-yard touchdown pass to Darnell Thomas 7 minutes into the quarter. Hingham blocked the extra point attempt and kept the score 6-0.

After incompletions and a sack, Hingham was forced to punt again, and Fitchburg repeated what worked earlier. Outside runs to Oquendo and personal foul penalties set up the Red Raiders with first and goal with a minute remaining in the quarter. Running back Oquendo once again took the ball, leading Fitchburg into the endzone and over Hingham 13-0. “After the first quarter our guys checked their hots and played a hell of a football game,” commented Hingham head coach Mark Nutley on their sudden change in energy.

The beginning of the second half was a little better for Hingham offensively and defensively. The Harbormen put together a drive of their own, ending on a 4 yard run by Patrick Petrillo. The Harbormen also kept the Raiders to one score, a 21-yard running play to fullback Devon Barisano halfway through the quarter. Hingham immediately responded with a touchdown from Will Griffin, reeling the Red Raiders back within one score. Hingham had an offensive opportunity with one minute remaining in the half but was unable to get the gears turning and the half ended with the Harbormen down 20-14.

Hingham rebounded in the third quarter, taking the lead back from the Red Raiders. A long drive by the Harbormen set them ahead 21-20, four minutes into the second half. Matt Lahiff caught the 15-yard pass and kicked the extra point that gave Hingham the lead. Fitchburg came back with a long drive of their own, soaking up six minutes and putting them back on top 27-21.

With 9:58 left in the final quarter, Hingham junior Nicholas took a 7-yard handoff to score and retake the lead. Fitchburg’s Jevon Rosemond took the following kickoff to Hingham’s 48-yard line, putting the Red Raiders in a perfect position to score quickly. A series of runs by Barisano gave Fitchburg the touchdown, the third of the game for Barisano. The drive took just over two minutes and after a completed 2-point conversion, the Red Raiders were back on top 35-28.

A couple of punts later, the Harbormen defense came up with a big stop, giving the offense the ball back with one minute to go and the game on the line. “We didn’t even know if we were going to get the ball back,” remarked Pierce and Nutley, who prided his defense, “when the defense needed to make plays, they made plays and gave us the ball.” Pierce put together a strong drive, featuring another long pass to Lahiff, that carried his team down to the 12-yard line with 2 seconds left in the game. Pierce floated a back corner end zone pass to Estes that just sailed over his head with time expiring, and Fitchburg won their first game of the season 35-28.

Despite the heartbreaking loss, Hingham remains confident. “Other than unfortunately not being able to complete the comeback at the end, it was nice to see that in those situations we don’t fold and we keep going,” responded Pierce on the pressure the team faced. Coach Nutley was very similar in his mindset towards the next games. “We battled them down right to the last second so I think we’ll definitely have some momentum going into Thursday night,” said Nutley of Hingham’s next matchup. Nutley also hopes to work on tackling this coming week, as, “we got to do a better job tackling, that killed us tonight”

On April 1st Hingham will play an away game against Silver Lake. Click here for more information on the Harbormen football team. 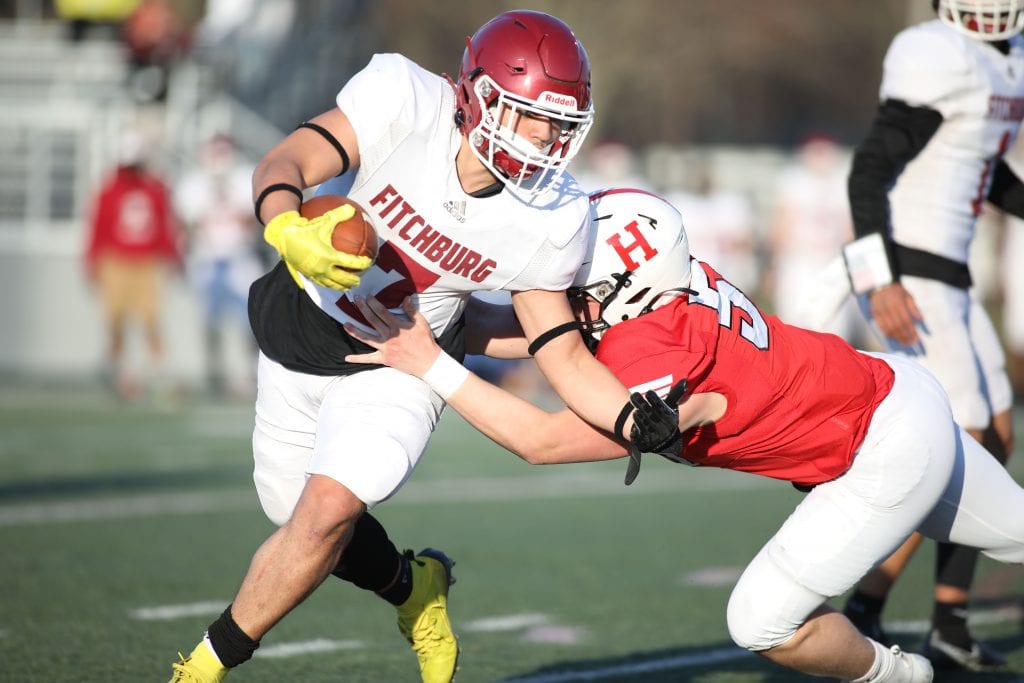 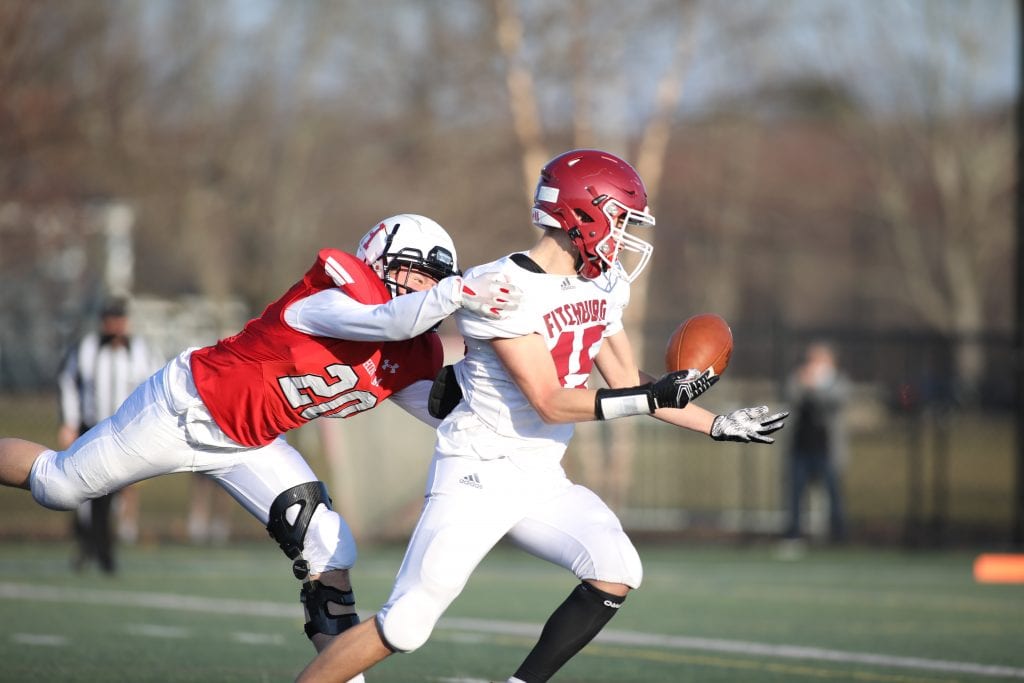 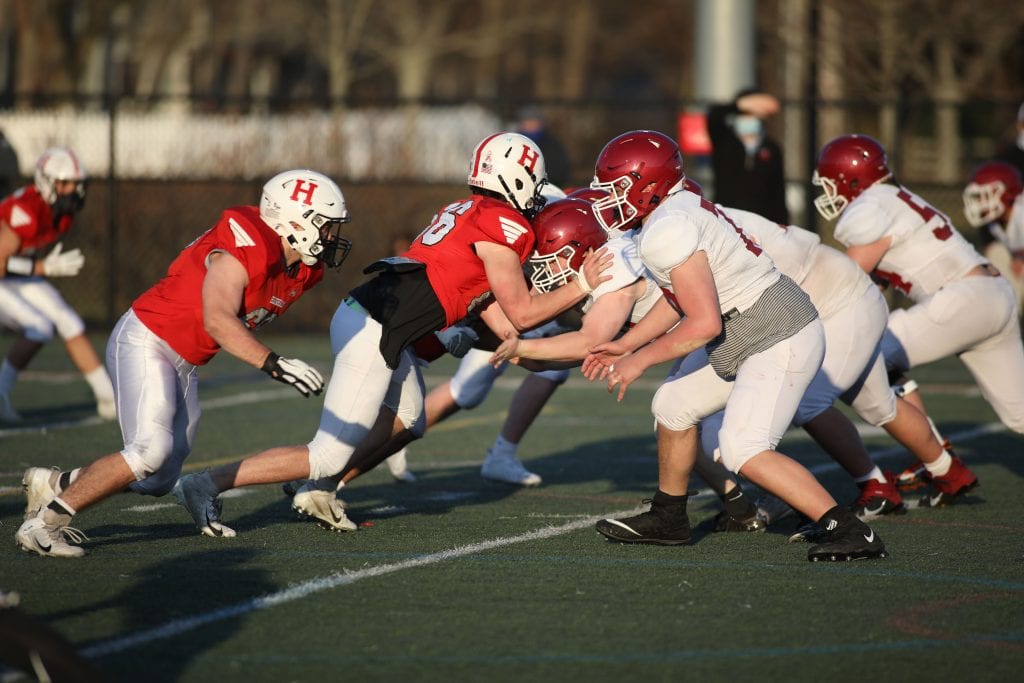 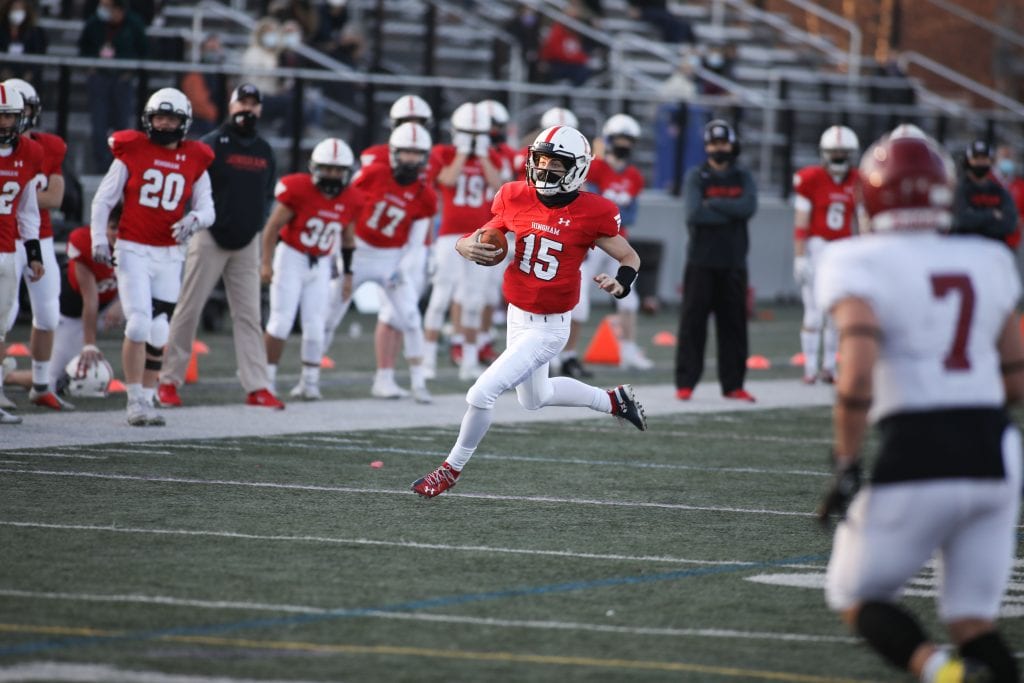 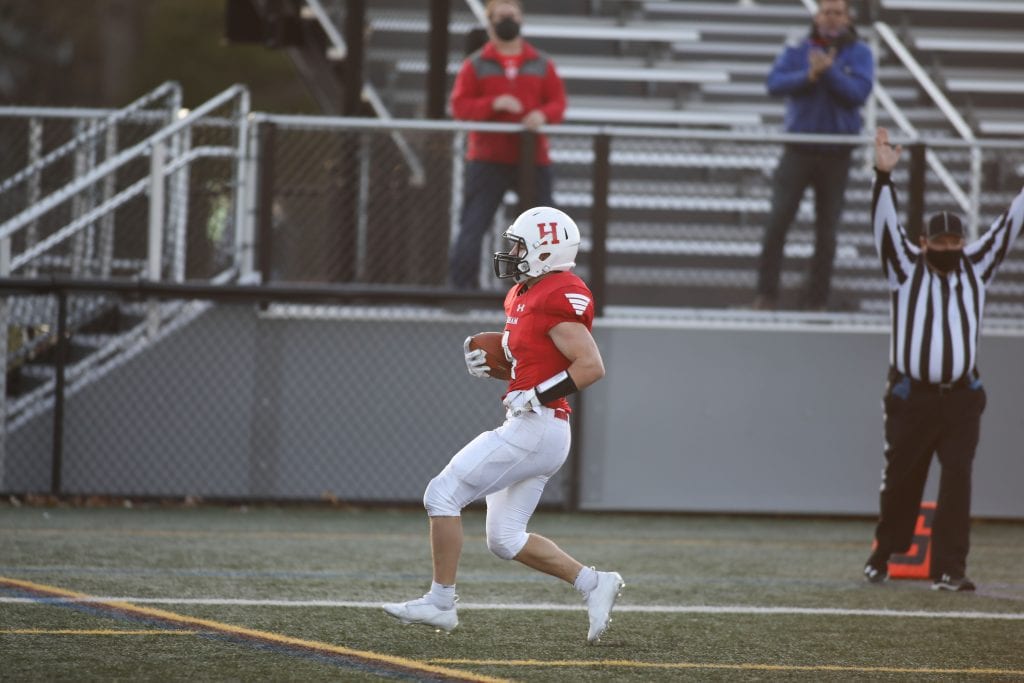 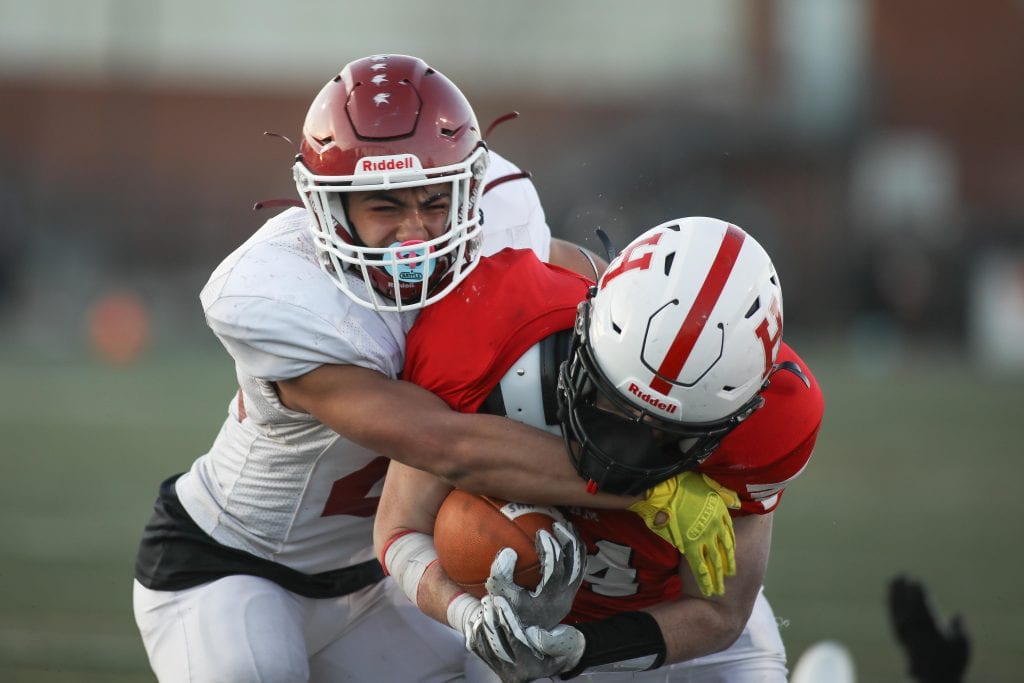 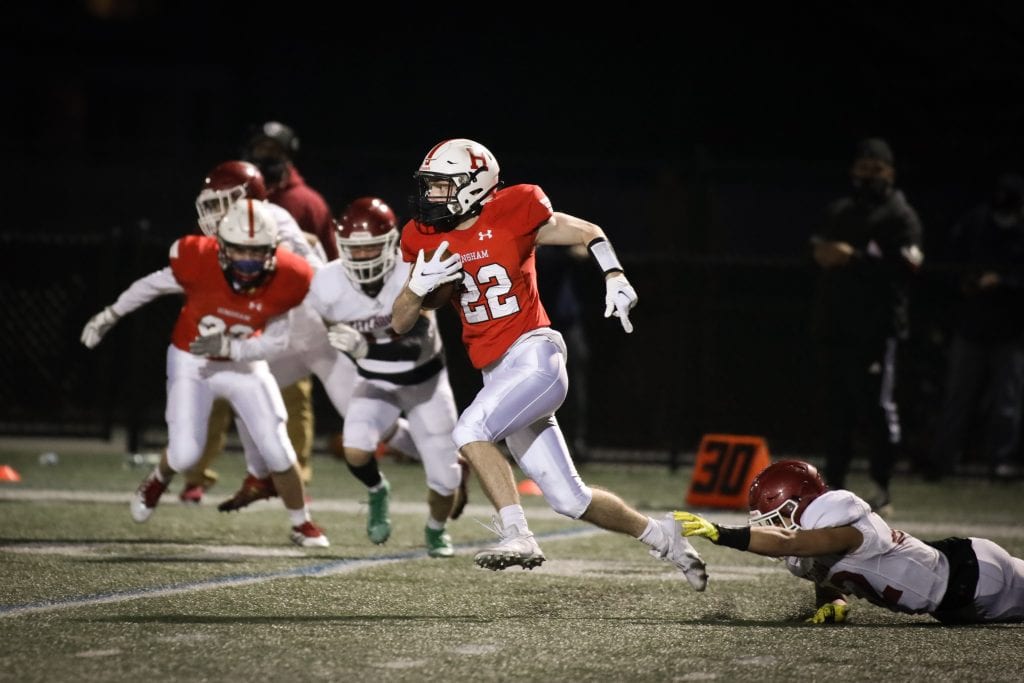 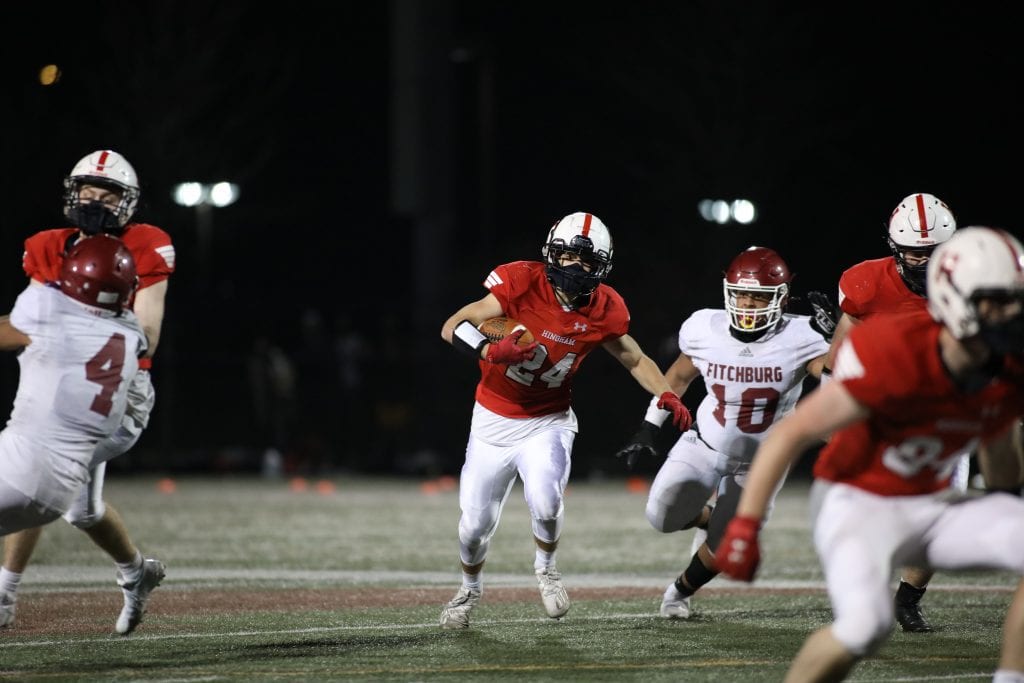 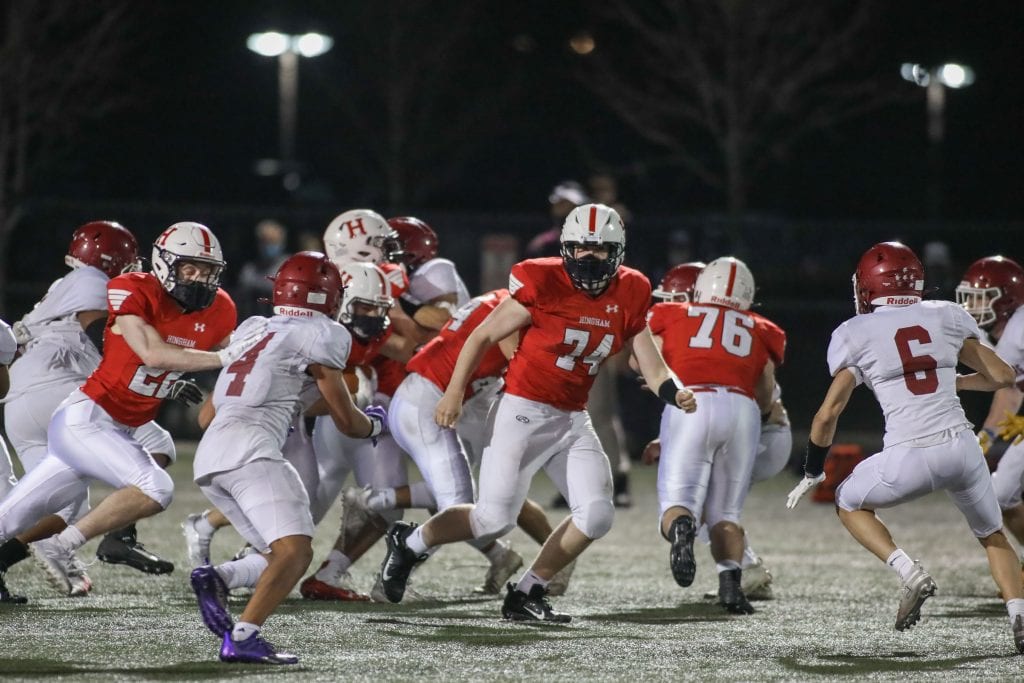 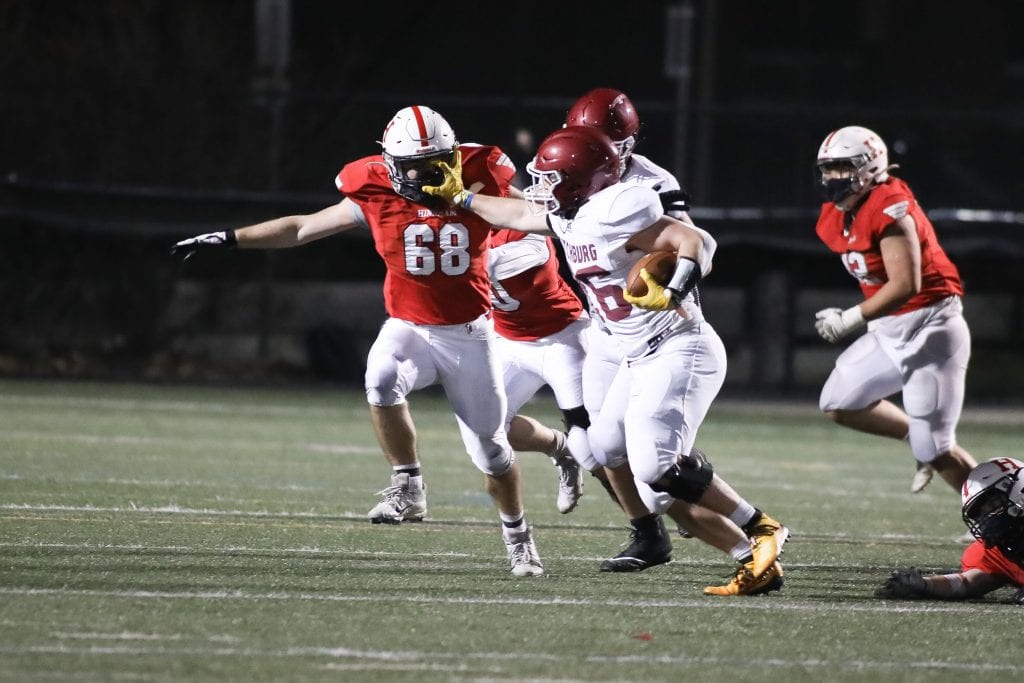