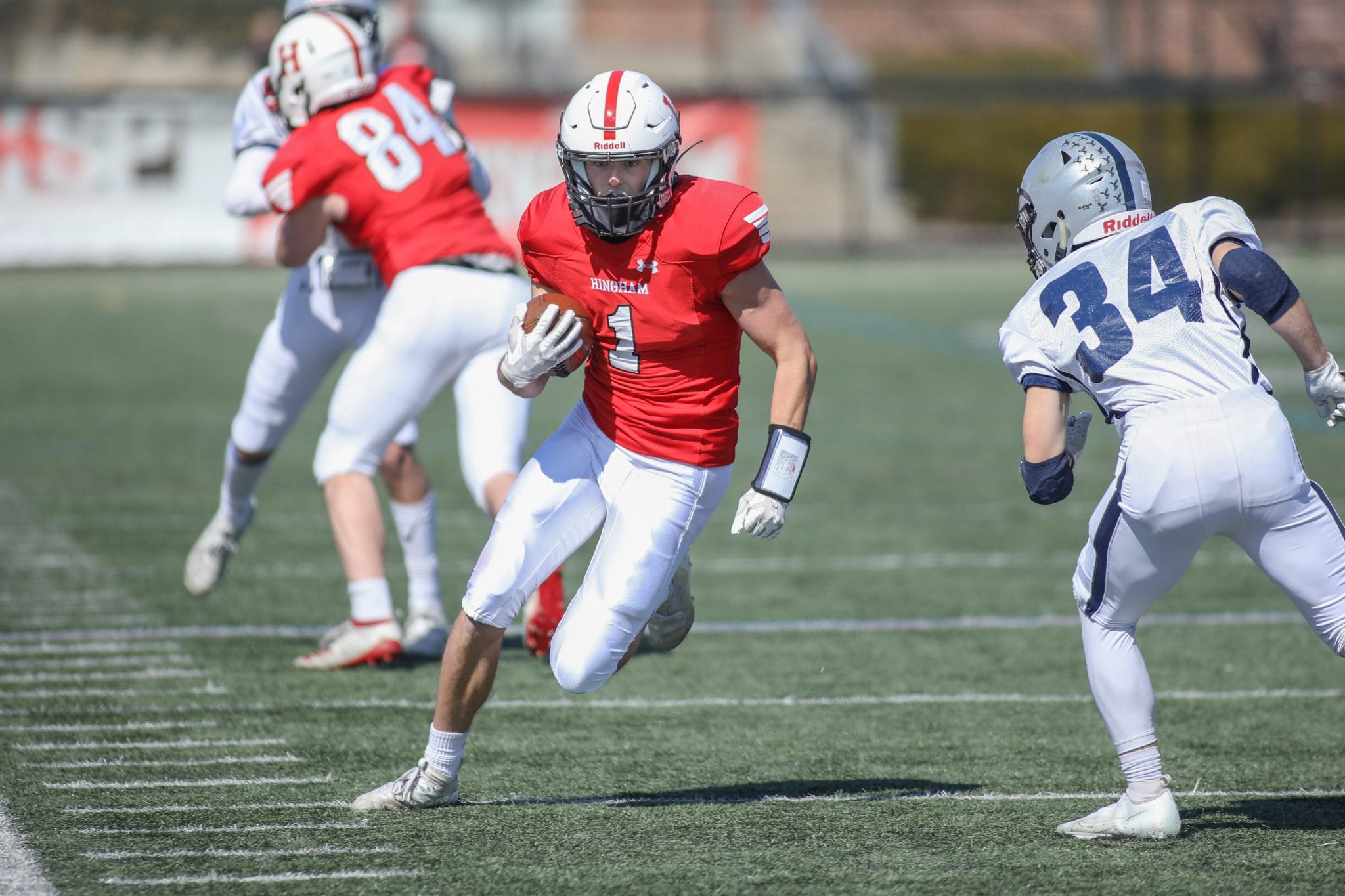 Senior Captain Charile Crean runs down the sideline in the 1st quarter.

In a stadium not even half full, Hingham triumphed with a late win over the visiting Plymouth North. The sunny spring weather was rife with excitement and anticipation as the Harbormen took the field, ready to start the season strong.

The first quarter was largely scoreless with minimal action. Hingham, known as an aggressive team that almost always goes for it on 4th down, went 0-3 on fourth down attempts. “We would have liked to have completed those or not even gotten into those fourth-down situations,” said starting quarterback Dylan Pierce about his team’s fourth-down plays. Despite these setbacks, Hingham’s defense remained strong against a run-heavy offense that featured playmakers like running back Ryan Durocher and quarterback Francis Comeau. With just over 1 minute left in the first quarter, Comeau took the ball on a quarterback sneak and put up the first points. After a good extra point by junior Alec Peruzzi, Plymouth North was up 7-0 and immediately forced Hingham to punt at the beginning of the second quarter.

The second quarter was also scoreless until the last 10 seconds. After some errors on punt returns for the Harbormen special teams, the Eagles took the ball and started to march down the field. The 75-yard drive featured a 22-yard run to set up Plymouth at the 7-yard line with 20 seconds left. However, the Harbormen defense remained stalwart to force a field goal and keep the game 10-0. “It doesn’t get better than that, ball’s on the seven-yard line and they turn them away, that’s huge,” remarked Hingham head coach Mark Nutley. “That was a great plan defensively the defensive coaches and the defense came up with and they made some big plays which was huge.” This big stop undoubtedly started to shift the momentum back in Hingham’s favor.

The third quarter was also scoreless, despite an energy shift. Hingham came out of the halftime re-energized and ready for the next 24 minutes. For a while, their gameplay matched their disposition. Pierce completed a 49-yard pass to wide receiver Matthew Lahiff, hyping up families in the stands and teammates on the sideline. However, the high was short-lived as on the next set of downs Pierce was picked off by the Eagles defense, stopping the Harbormen drive in their tracks. The rest of the third quarter was a trade of punts and turnovers on downs. As Nutley described his team until that point, “Three quarters of just doing nothing offensively.” The third quarter ended with Hingham stuck in yet another 4th and 2 situation. Coming back from the break, Patrick Petrillo picked up the necessary yardage and kept Hingham’s drive alive. Once again, the senior Petrillo took the handoff and ran for 23 yards, putting the team on Plymouth’s 29-yard line. And on the next play, Pierce found Lahiff in the corner of the endzone for the 30-yard completion. Lahiff then kicked the extra point, making it 7-10 with just over ten minutes to play in the game. “They threw a couple balls to me and I went up and got it, it was pretty nice,” said Lahiff about the offense in the second half.

On Plymouth North’s next possession, a running play resulted in a fumble on their 45-yard line. Senior Liam Collins came up with the ball, giving the offense prime field position. Sure enough, running back Cian Nicholas took the ball a massive run with a horse collar penalty, putting the ball on the 15-yard line. Hingham kept at the running game, finally giving the ball to junior William Griffin for a run up the middle and a touchdown. Lahiff once again made the extra point, putting Hingham up 14-10 with eight minutes to play. From then on, it was a nail-biter for the Hingham fans who watched their defense under pressure. The Eagles put together some passing plays that took the ball down to Hingham’s 36-yard line. With 10 seconds left, Plymouth North had two shots at a hail mary play, both of which were knocked down by Harbormen defensemen. Hingham won the game 14-10, starting the season off strong.

“After the slow start….a lot of mistakes we kept making….we started to get the team camaraderie going and in that fourth quarter we just turned it up [and] turned the game over,” Pierce stated about the late comeback. Nutley had a similar perspective on the game, “We can’t hang around until the fourth quarter and do that stuff, it’s got to be done earlier.”

Both Nutley and Pierce pointed out how big of a game some of the younger players had. After captain and number one running back, Charlie Crean was unable to continue in the third quarter, junior running back Cian Nicholas stepped up, putting the Harbormen in scoring positions and keeping drives alive. “Cian stepped up to take over the number one running back spot and he played a hell of a game” mentioned Pierce about his teammate. Nutley also appreciated Nicholas and other younger players, “a bunch of sophomores playing for us, making plays for us, like Roman [‘OC’ O’Chiardubhain] making some great plays at linebacker, we had our junior running back Cian Nicholas running jets all day for us, making some plays.”

Looking forward to the rest of the five-game season, some players are feeling disappointed in the shorter schedule, like senior Lahiff. “I wish we would have a ten-game season,” he hoped, “but we will overcome it and hopefully we win all our games.” Nutley outlined some of the things his team had to fix before their next matchup. “We pick up ten yards we lose 20 yards,” noted Nutley, “We just have to do a better job finishing.” However, he remains confident in his team’s ability, “We’ve got to clean that stuff up but defensively that was awesome football.” 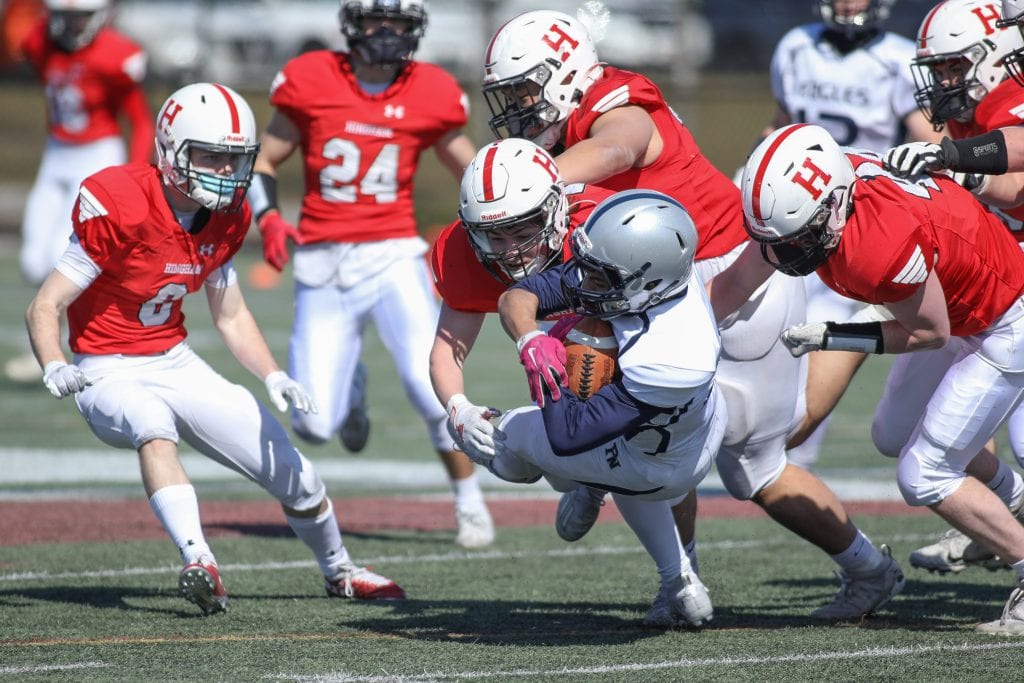 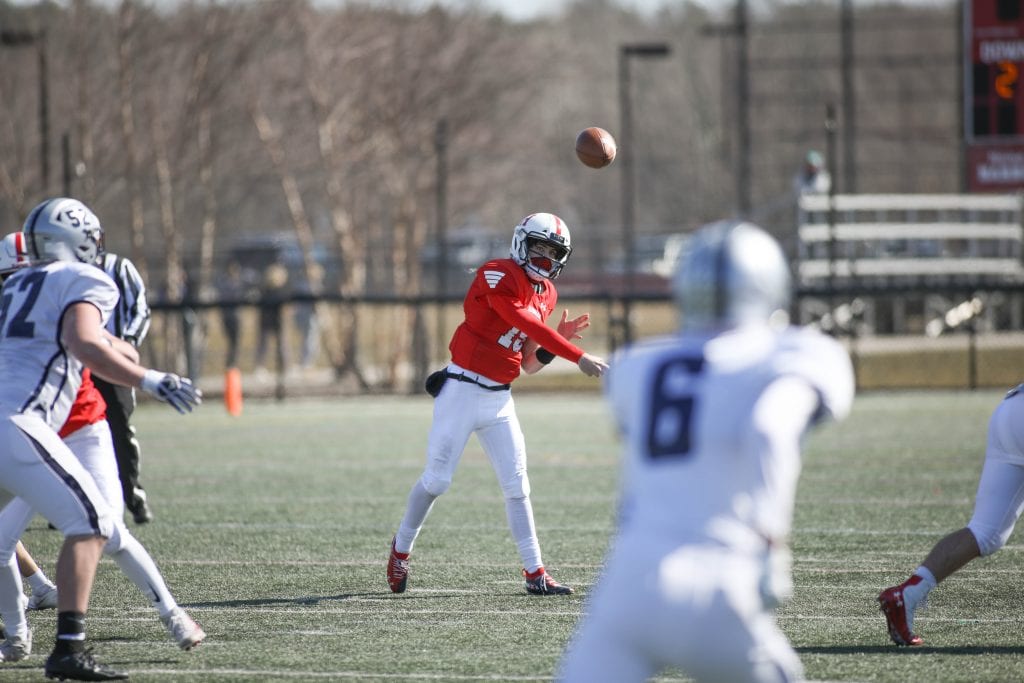 Junior Dylan Pierce attempts a pass in the 1st quarter. 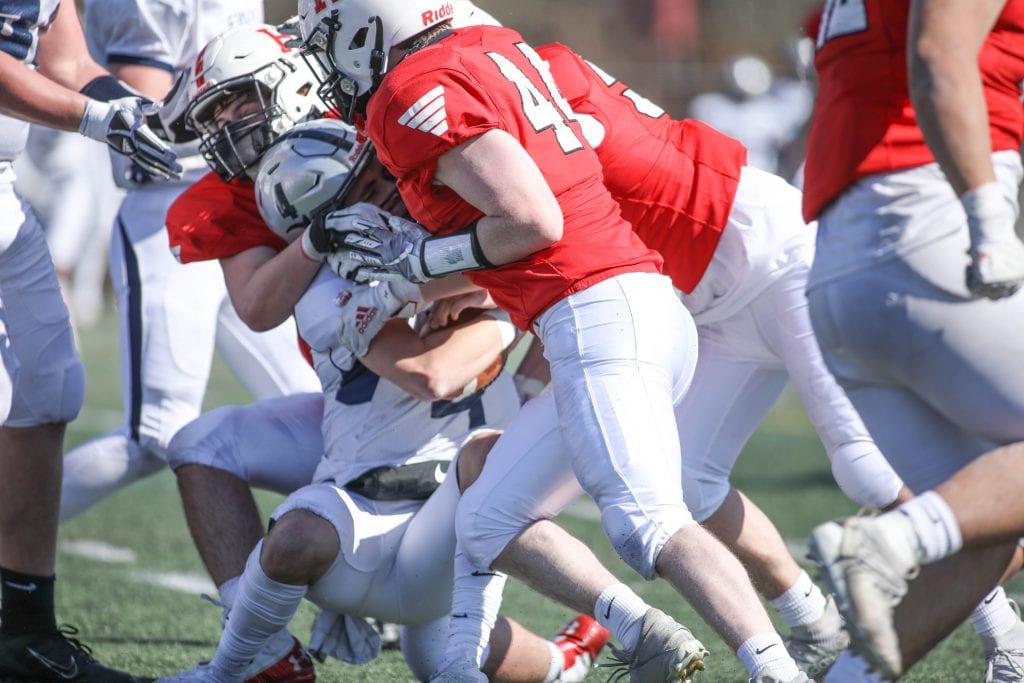 The defensive line stops a QB run in the 2nd quarter. 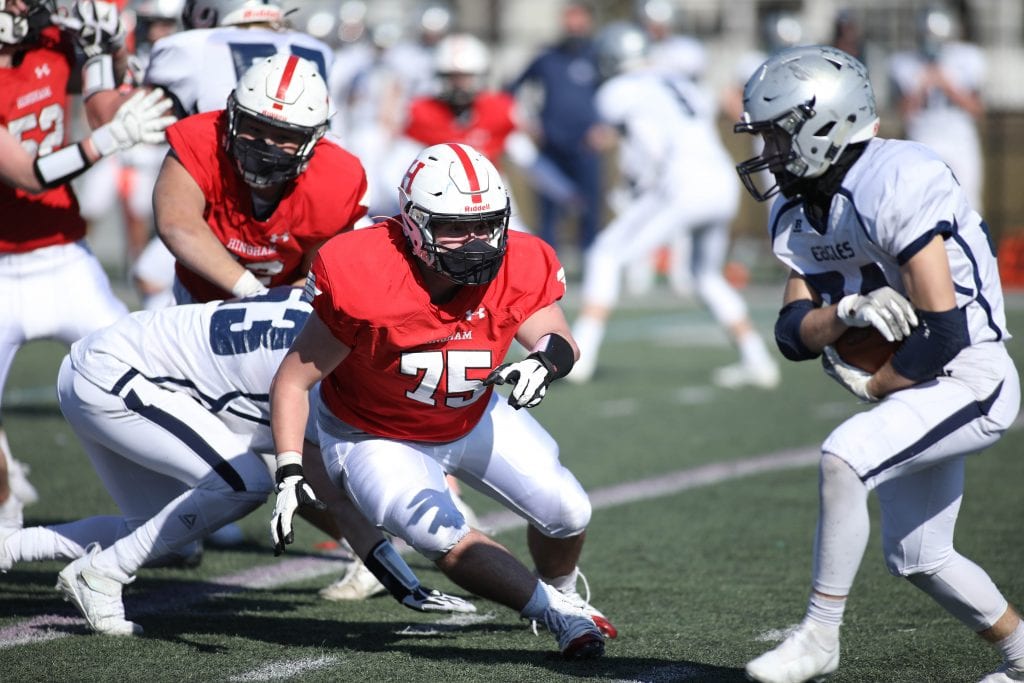 Junior Owen Richards breaks through the offensive line in the 2nd quarter. 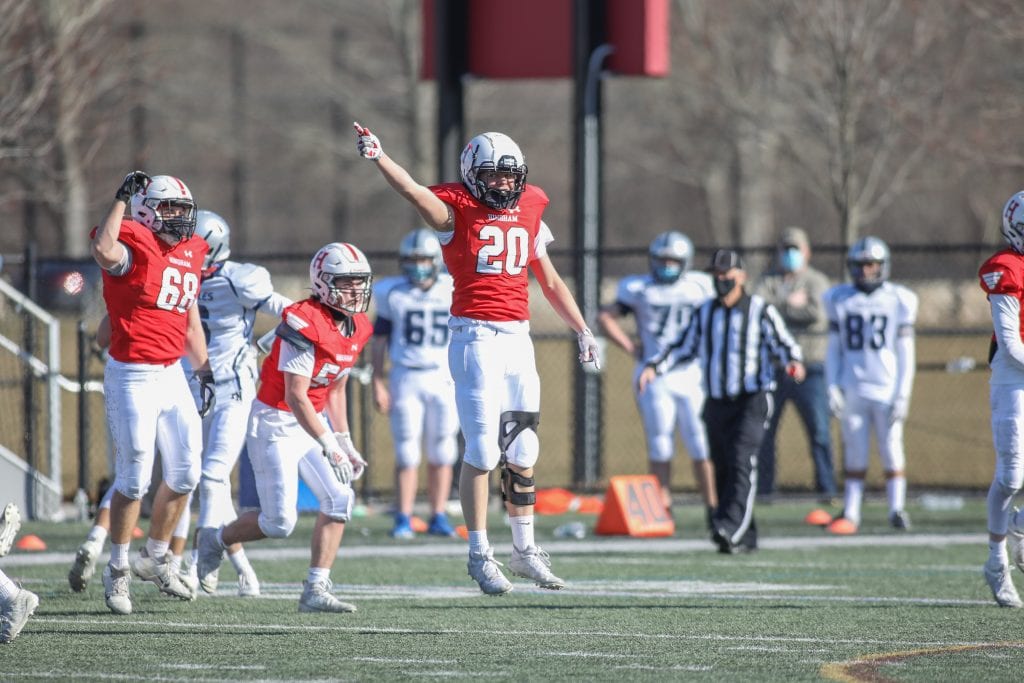 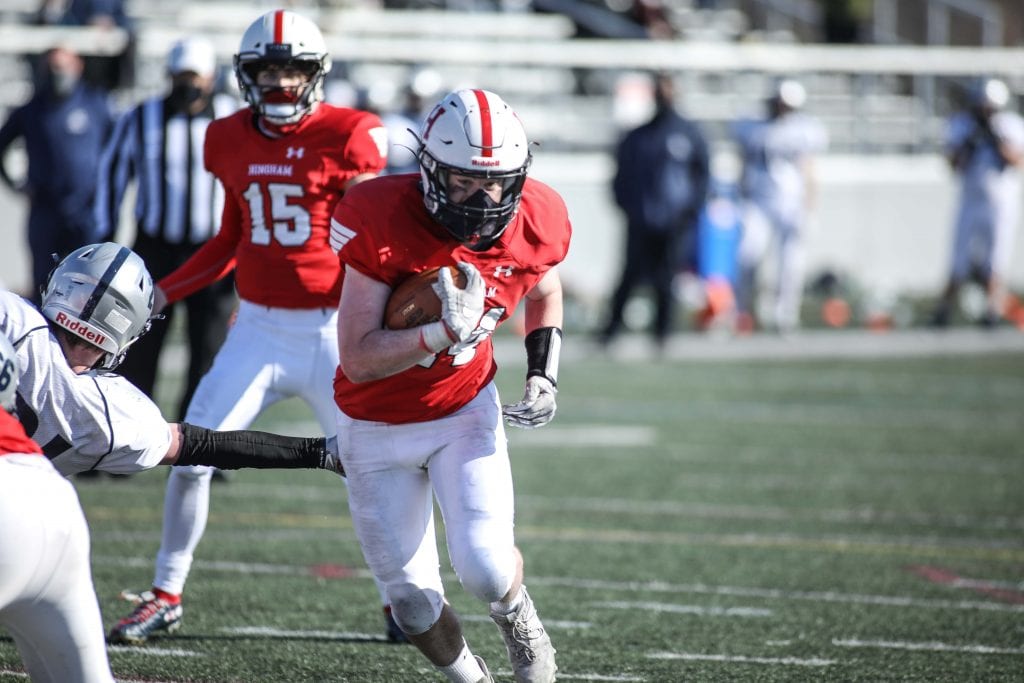 Junior William Griffin runs in the second Harbormen TD of the day. 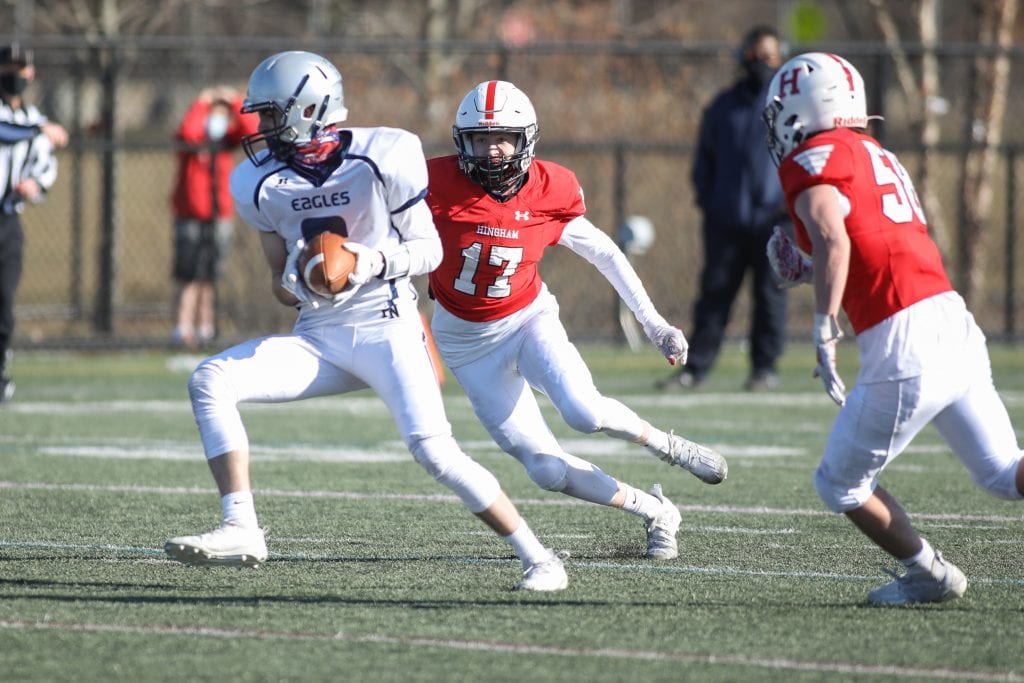 Sophomore Jack McGorry set to make a tackle on a short gain. 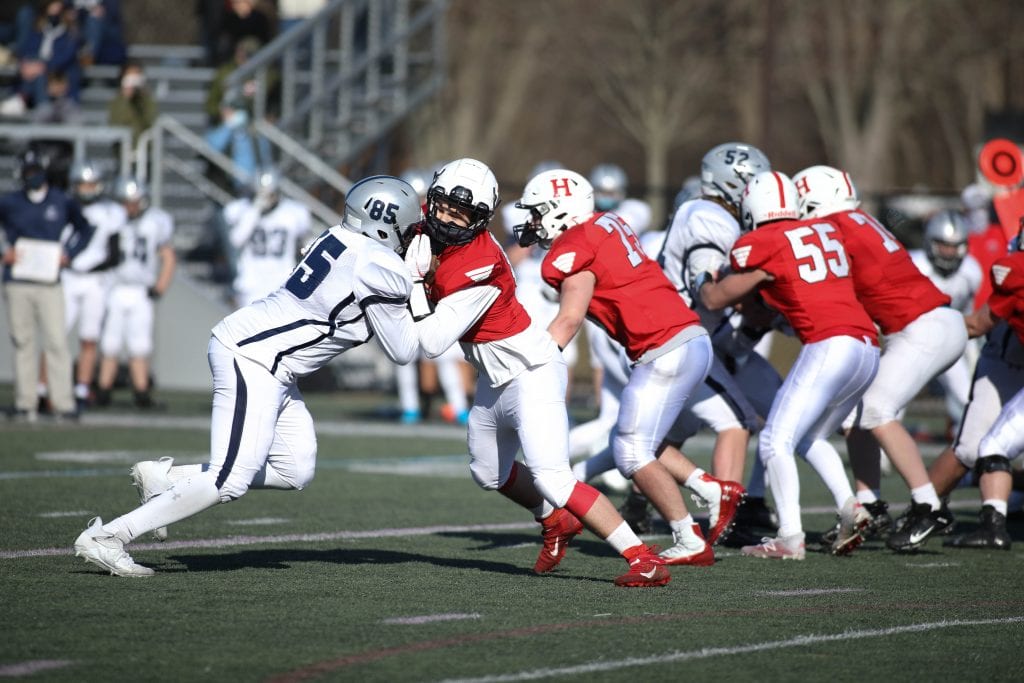 Sophomore Cam Dobson blocks the DE late in the game. 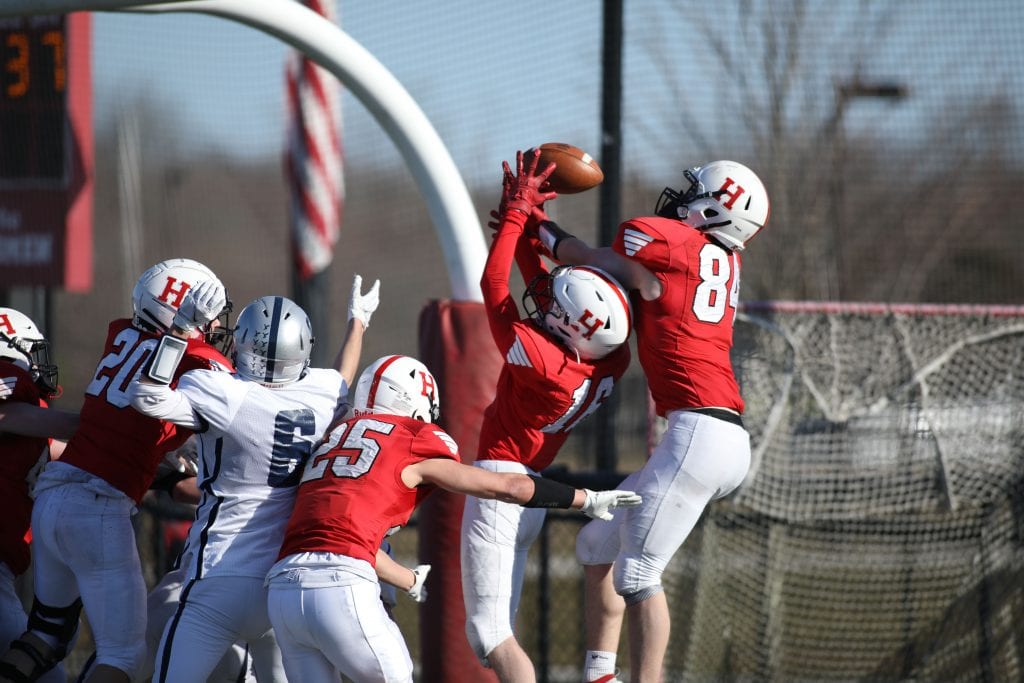 Senior Matt Lahiff(84) not only caught a TD, but also broke up the games last hail mary play. 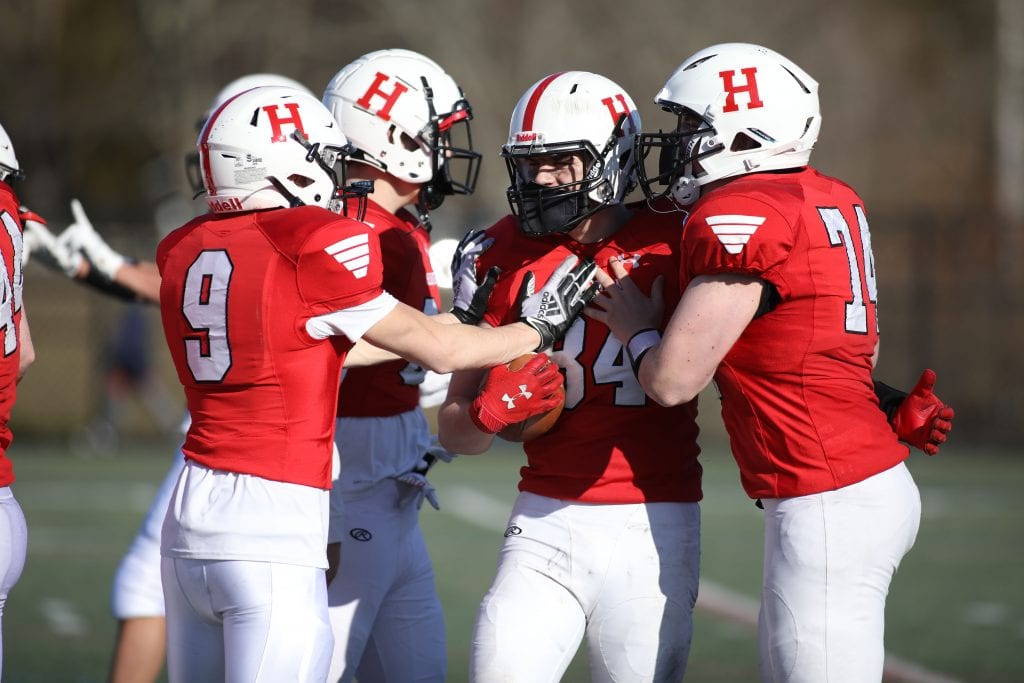 Great team win by the Harbormen.