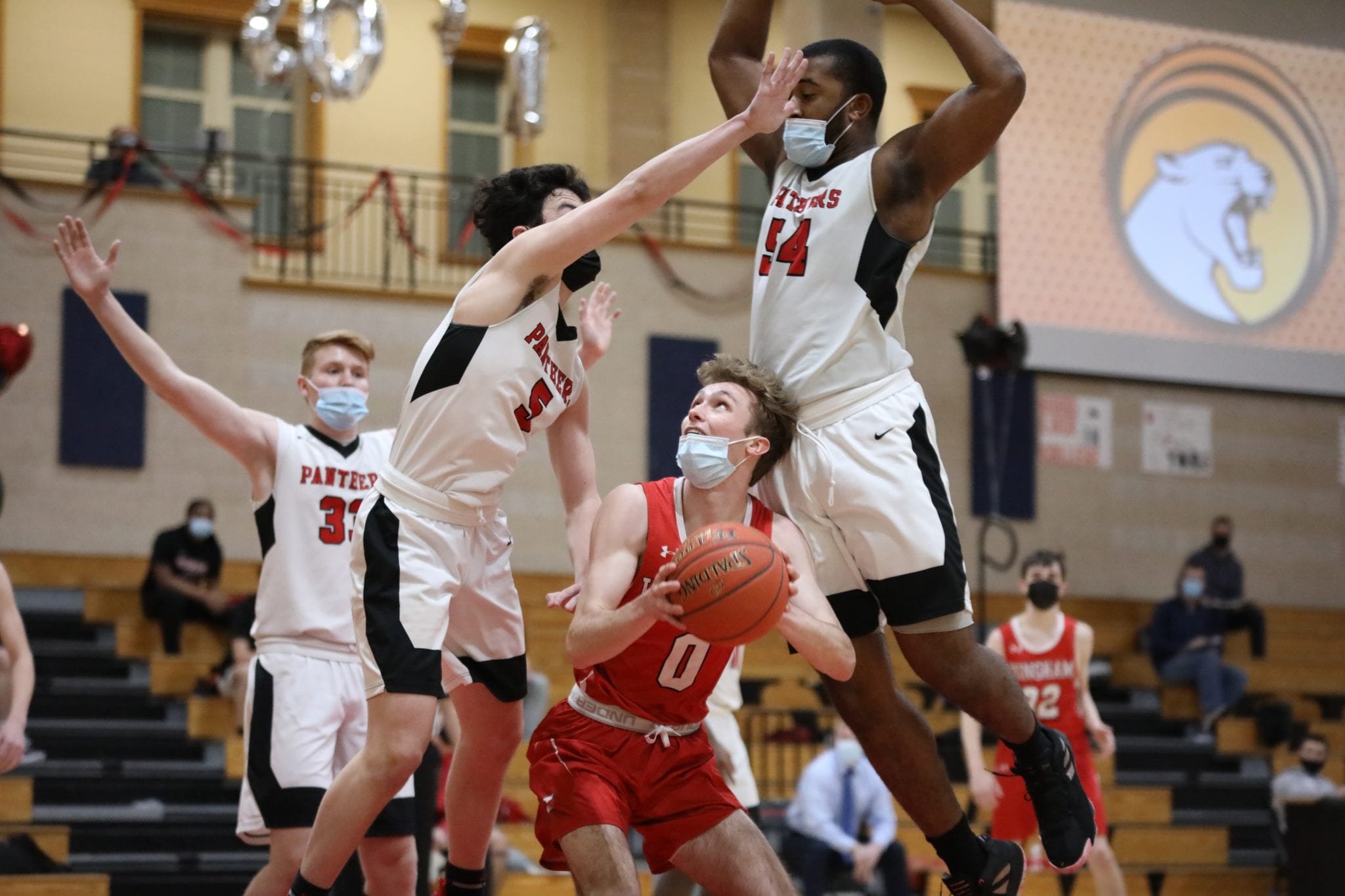 Senior captain Jack Hurley gets two defenders up in the air before getting fouled under the basket.

The Whitman-Hanson Panthers and Hingham Harbormen met at Whitman-Hanson Regional High School on Saturday night in the finals of the Patriot Cup. After Hingham’s Thursday night win against North Quincy and Whitman-Hanson’s victory over Plymouth North, the two teams competed for the cup. Whitman-Hanson had won 34 games in a row going into the final, and Hingham had a 10-4 season record before this game.

Both teams employed quick passing plays to create layup opportunities in the first minutes of the game. Although the Panthers had the size advantage, they also had to respect Hingham’s ability from behind the arc, especially from junior Curtis Murphy and sophomore Liam McBride. Hingham took the early lead 14-8 with about half of the quarter remaining, but Whitman-Hanson fought back to tie at 15-15. With just a few seconds remaining in the quarter and down by two, Hingham inbounded the ball and senior Andrew Teague scored on a jumper off the backboard, tying the game at 21 going into the break. This momentum shift most definitely characterized the success of Hingham’s second quarter.

The Panthers started the quarter well, creating opportunities off fouls and driving towards the basket. Despite their troubles at the free-throw line, Whitman-Hanson was winning a majority of the rebounds off both their offensive and defensive boards. Hingham overcame this difference, scoring 5 points in a row and forcing a Panthers timeout. After this run, Hingham scored 6 in a row thanks to 3 Whitman-Hanson turnovers. With this, Hingham won the second quarter struggle, going into the second half up 41-36.

Despite Hingham’s encouraging first half, Whitman-Hanson pulled away as soon as the second half began. The Panthers went on an offensive streak that completely overwhelmed Hingham’s aggressive defense, forcing the Harbormen to take a timeout. Whitman Hanson also doubled down on their rebound game, denying Hingham much offensive opportunity. Fouls in the third quarter were a source of concern for the Panthers, but their offense carried them back to a one-point lead at the end of the quarter, 54-53. In the final quarter, Whitman-Hanson’s big playmakers like Cole LeVangie, Nathaniel Amado, and Malcolm Alcorn-Crowder created an 8 point run unmatched by the Harbormen, sealing the game in their favor. With a 74-61 win, the Panthers cut down the net and secured the 2021 Patriot Cup. Senior Amado ended the game with 17 points, 12 rebounds, while Senior LeVangie with 15 points, ten rebounds, and six assists.

Hingham Coach Bob Kniffen explained his game plan after the loss. “We come into every game confident, that we have a position to win, and we have a good plan and we’re prepared and I thought that and felt that tonight,” said Kniffen, “tonight was a lot different approach from the first two games but they were able to handle it.” He also gave congratulations to the Panthers, “Hats off to them, look at what they’ve done, undefeated this season, pretty much undefeated last season….they’re a tough team and that’s the type of team we should play in a championship game.”

Looking towards next year, Kniffen is looking forward to some returning juniors and sophomores that provide depth on the team. “We have a good core coming back with Curtis Murphy, Nick Johannes, sophomore Liam McBride,” he anticipated. He was excited about the “good experience this year,” that each one received.

Congratulations to both Hingham for their deep tournament run and Whitman-Hanson for their victory. 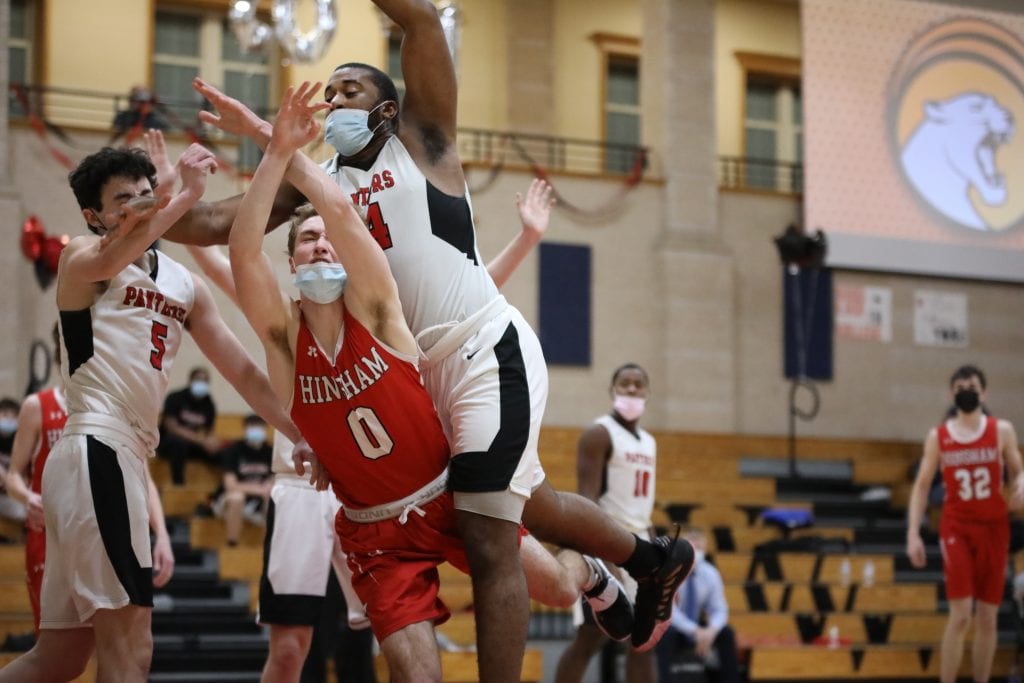 Senior captain Jack Hurley gets fouled on a lay-up. 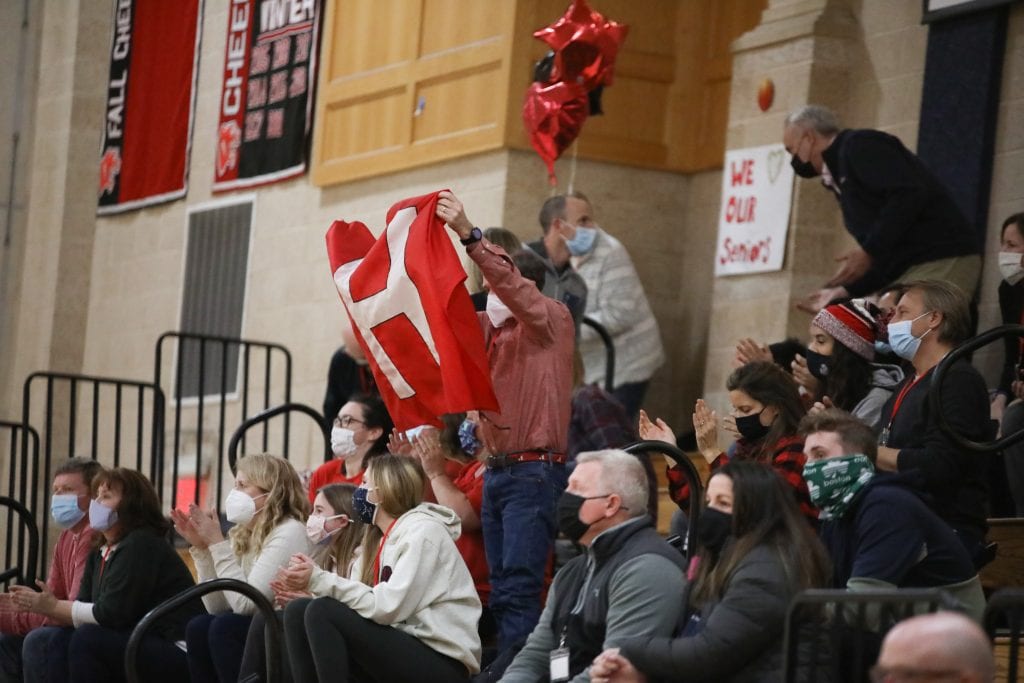 Hingham parents cheering their team on. 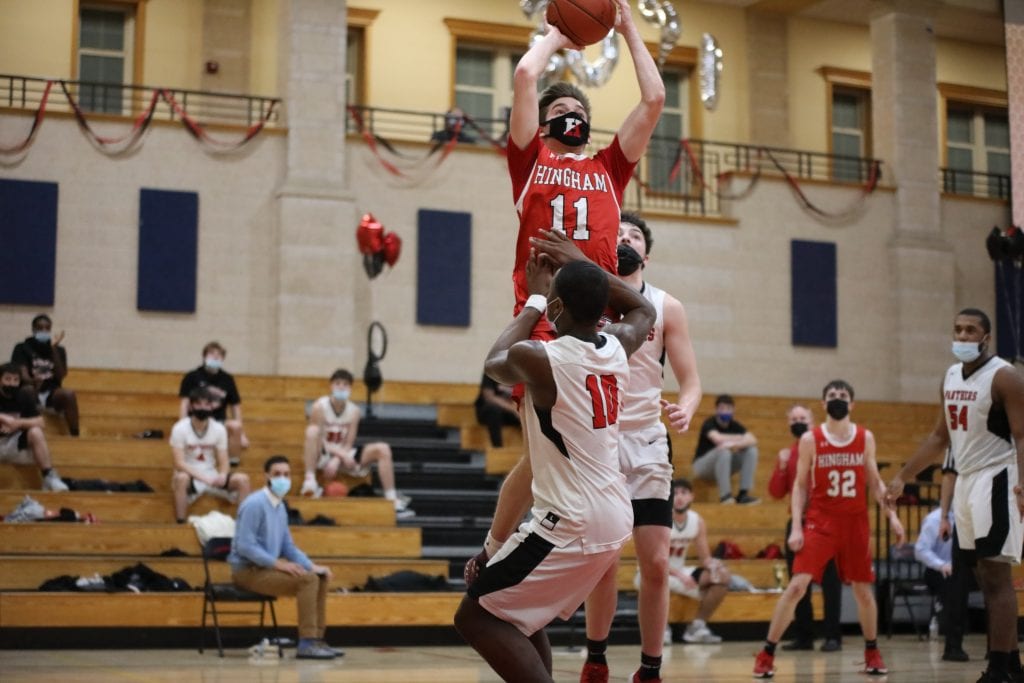 Senior Andrew Teague elevates on a shot under the basket. 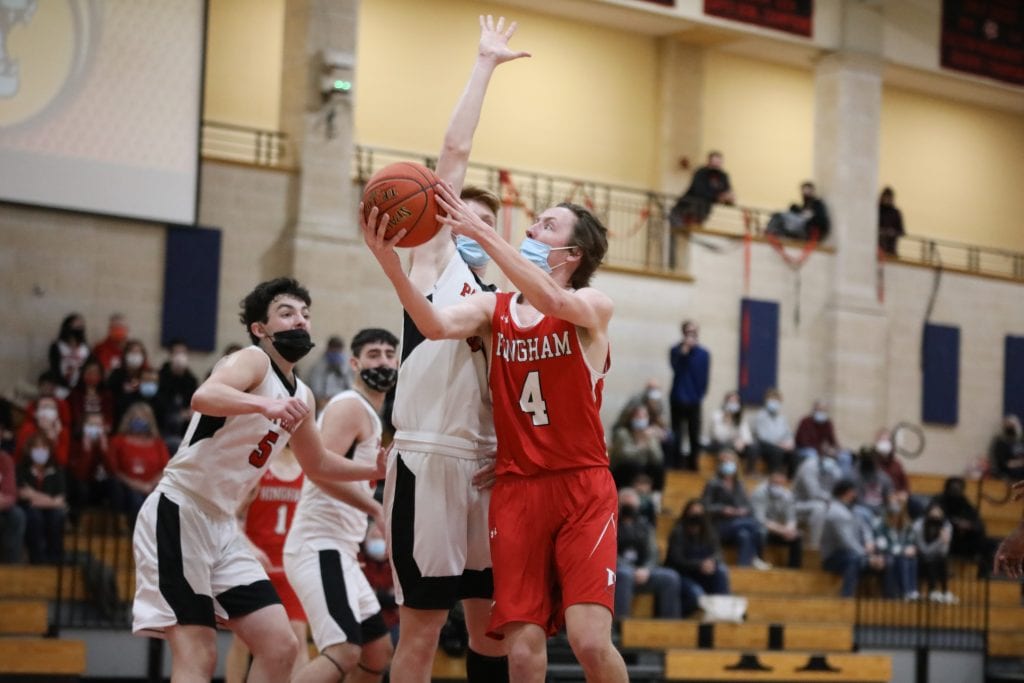 Junior Nick Johannes with his patented up and under move. 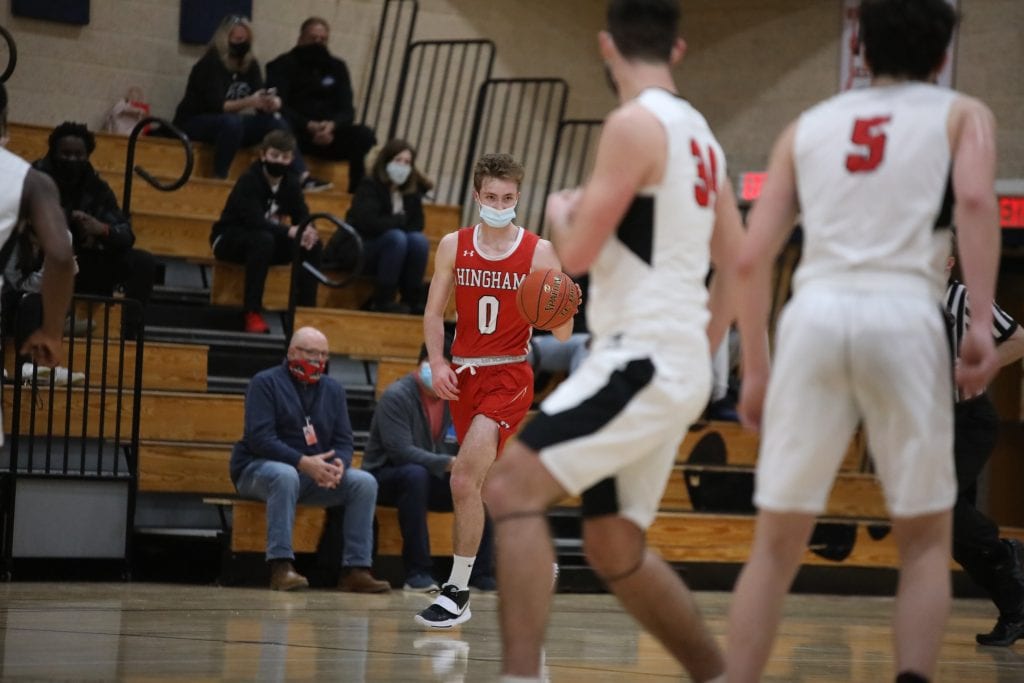 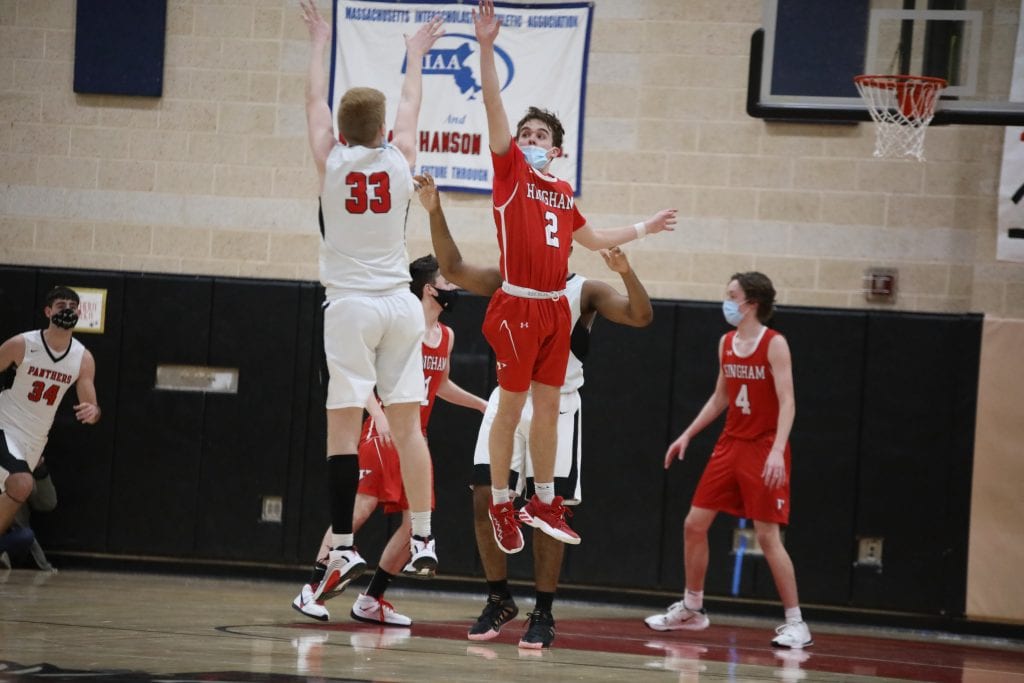 Junior Curtis Murphy extends to try and block a shot. 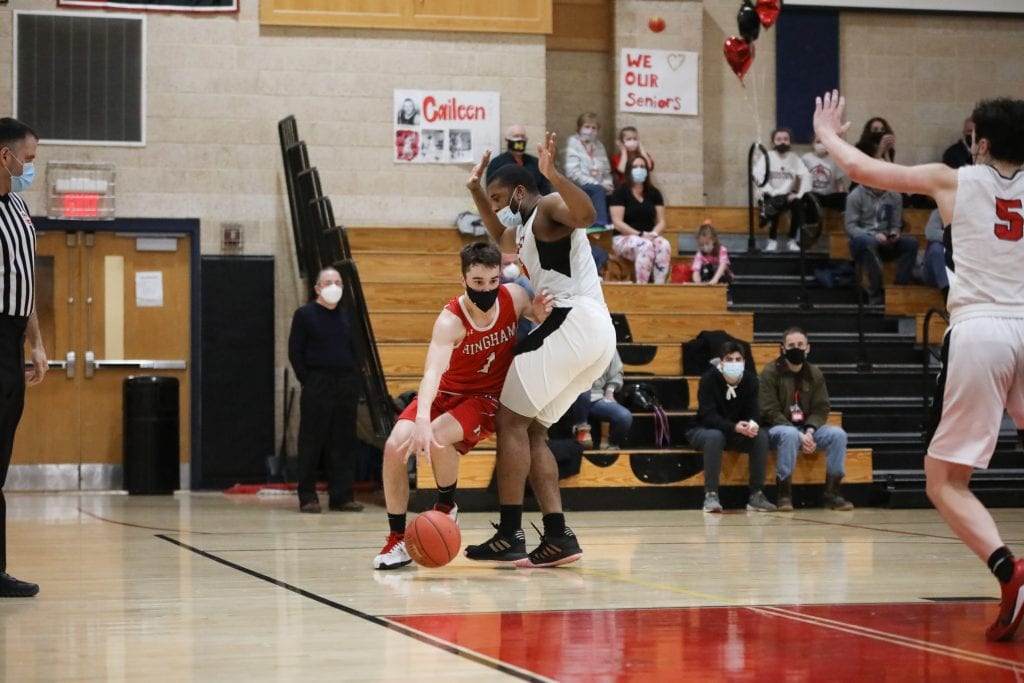 Senior Jack McBride tries to get around Whitman-Hanson's big man along the baseline. 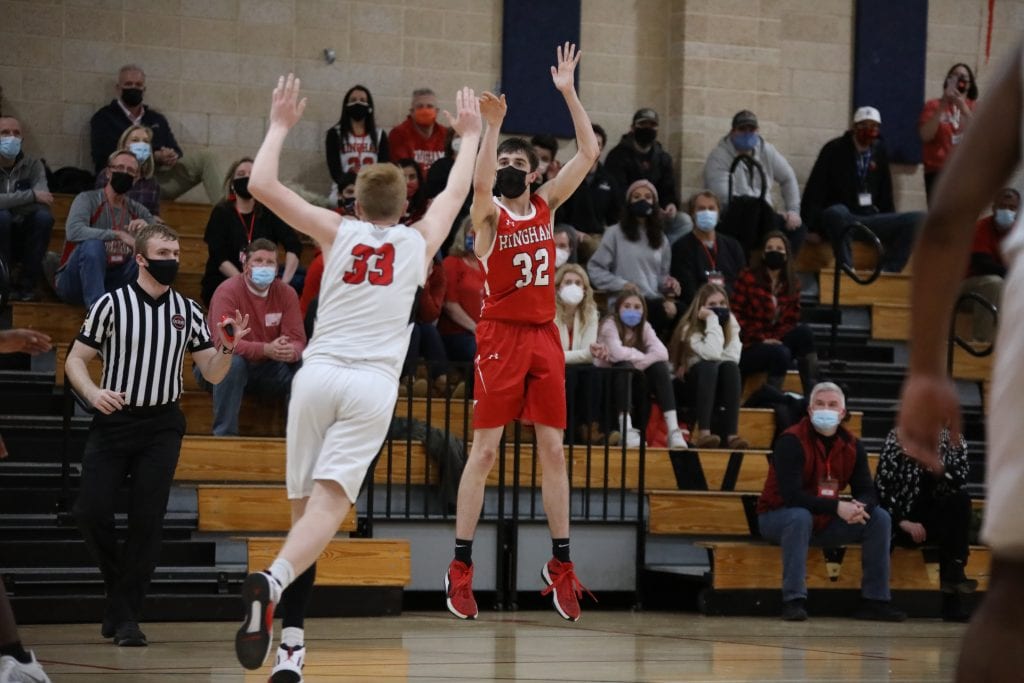 Sophomore Liam McBride is one of the players to watch next year.