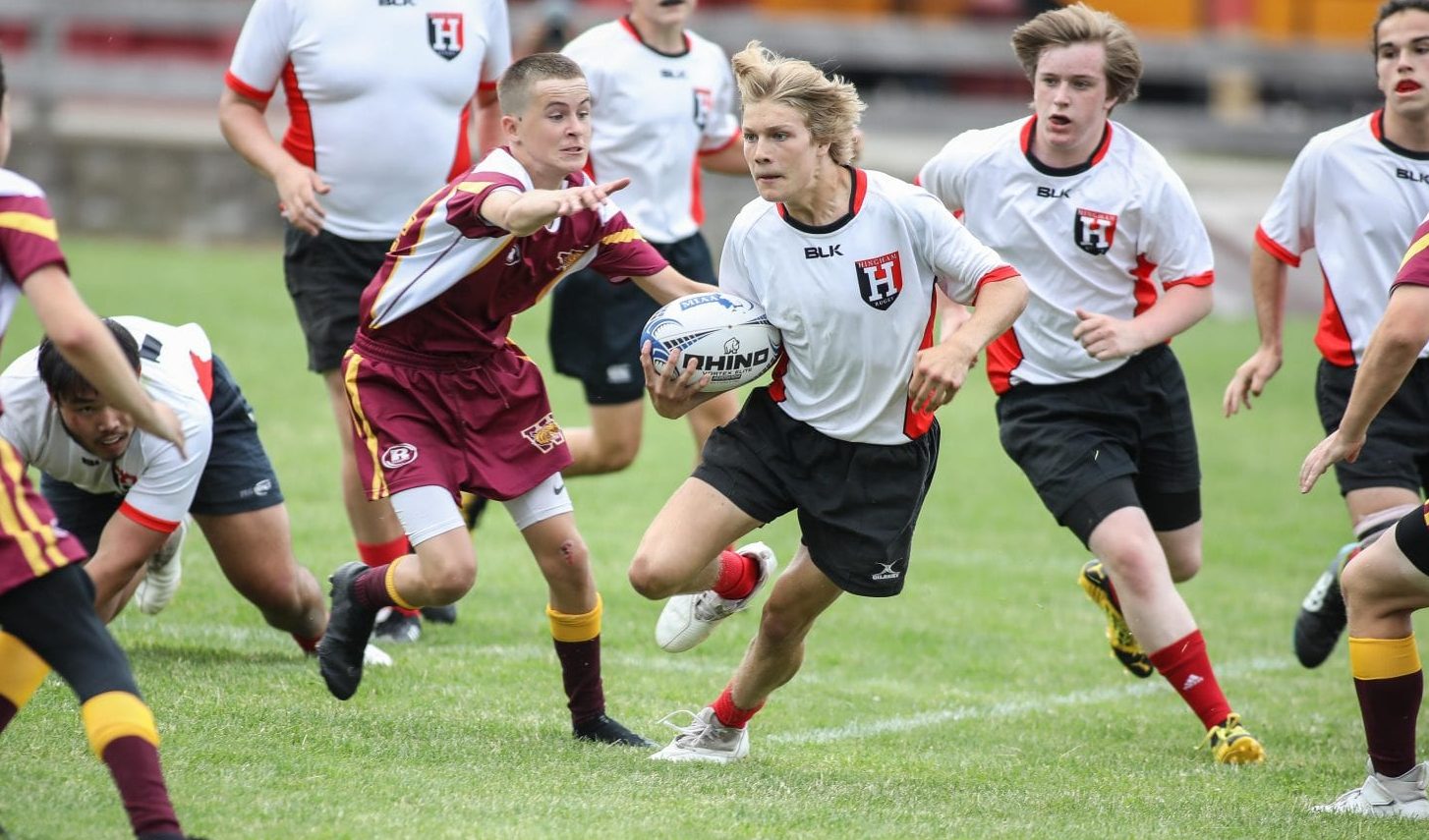 Senior John Thomspon with bookend scores to start and end the game in the quarterfinal win.

In a rematch against Weymouth on Saturday night in the quarter-finals of the MIAA State Tournament, the Hingham High School rugby team did something that may have never been done in school history, win their program’s first match during a state tournament.

Two weeks ago the two teams met on the same field and played to a tie on a last minute score from Hingham.  Both teams, who were winless in this shortened season, had a chance to get their first “W” to face top-seed Cambridge Rindge and Latin in the semi-finals later this week.  The Harbormen came out with energy and gained all the momentum early.  After a causing a turnover on Weymouth’s first possession, Hingham scored on two consecutive trys (touchdowns - worth 5 points) and two conversions (kicks - worth 2 points) giving them a 14-0 lead.

The Wildcats answered right back with two quick trys and conversations of their own, tying the game at 14-14.  Each team had another try and conversion sending the teams into halftime tied 21-21.  While the score made it seem this game was much of the same as last game, Hingham Head Coach Peter Condrick didn’t see it that way.

“Our tie with Weymouth two weeks ago was due to two things -- poor composure and lack of pace,” says Condrick. “What you saw (Saturday) was significant growth and maturity that they have begun to acquire through the season. I couldn't be happier. They stayed well above our expected percentages in all of our key areas of concern, particularly in maintaining our line speed in defense as well as protecting around the fringe of the rucks. We capitalized on turnovers quickly and they began to "play" the game versus react to it.  I will not say I am surprised- I have always believed that this team has the greatest potential and has proven the naysayers wrong at every turn.”

That speed on the defense and their ability to “play” the game was on full display in the second half.  The Harbormen stopped Weymouth in every possession and caused multiple turnovers.  Hingham scored three more trys and added three more conversions while completely shutting out the Wildcats giving them the 42-21 win.  What made it more impressive, was how short the bench was for Hingham.  Normally dressing 18 players, they were down to 16 giving them only one sub for the game.  That quickly went down to zero early in the second half with an injury.

“The lack of reserves has not hindered our boys, but encouraged them to valour in the contact area” Condrick added.  “We have a team now that is battle hardened and we have work to do to prepare for Chambridge Ringe and Latin next Thursday”

Each every one of the 16 players contributed to the program’s first win, including senior captain Liam Collins (1 try), senior John Thompson (2 trys), junior Declan Bareo (1 try), sophomore Aiden Stewart (1 try) and sophomore Jayce Mellish who not only had 1 try, but was a perfect 6 for 6 on conversions.  This win cements the program as a legitimate sport in HHS and people should take notice according to Coach Condrick.

“This first win is a unique one -- done in the quarterfinals of the playoffs,” Condrick reflects.  “However, what it means to our players is that the rewards for following the code of the game has its results in execution. I tell them every day that simply by being there, they are making history. They MADE history (Saturday) night... 15 guys with no reserves defeated a strong opponent. How? By a concerted and trusted effort by every man on the field playing the game as it should be played. To me it is the fruit of the labor that my dedicated coaching staff has made since we began this campaign. It is the rightful reward for each and every player who has struggled to bring themselves and each other to this moment, together. It is the physical expression of our Motto "CURRAHEE". It is the gift of having a supportive community that sees the value in this program for what it produces and maintains. And it is the clarion call to all that Hingham Rugby is a legitimate sport within the athletic fabric of Hingham High.They already achieved victory by simply stepping out there. We couldn't be happier with the boys and what they have achieved.”

The boys will travel to Cambridge on Thursday to face Rindge and Latin at 6:00pm for the semifinal match. 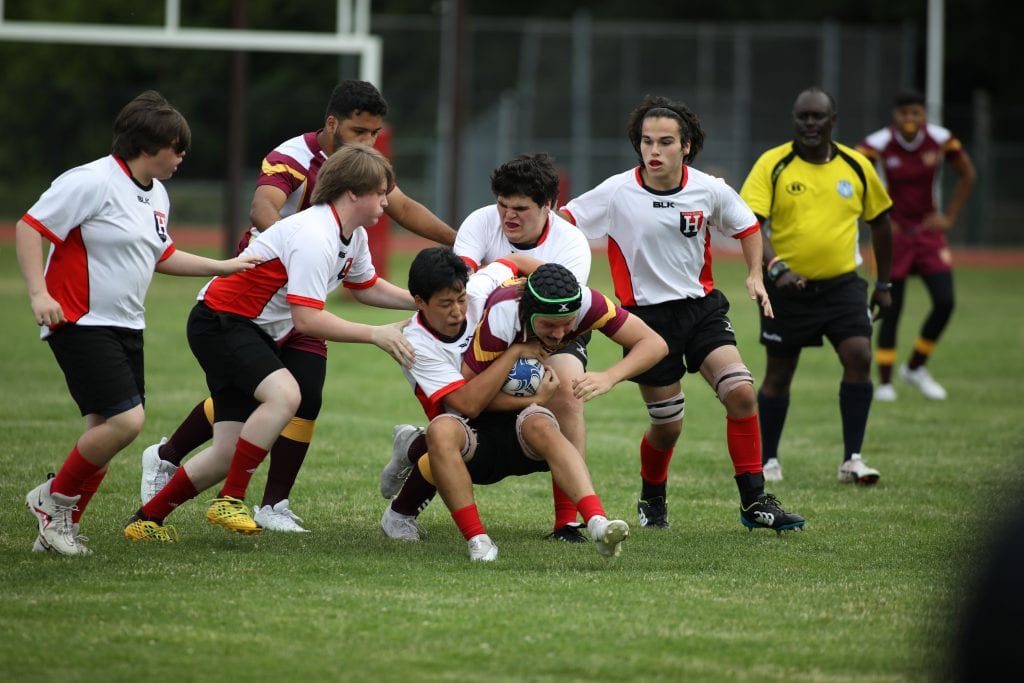 The tone was set early defensively in the game. 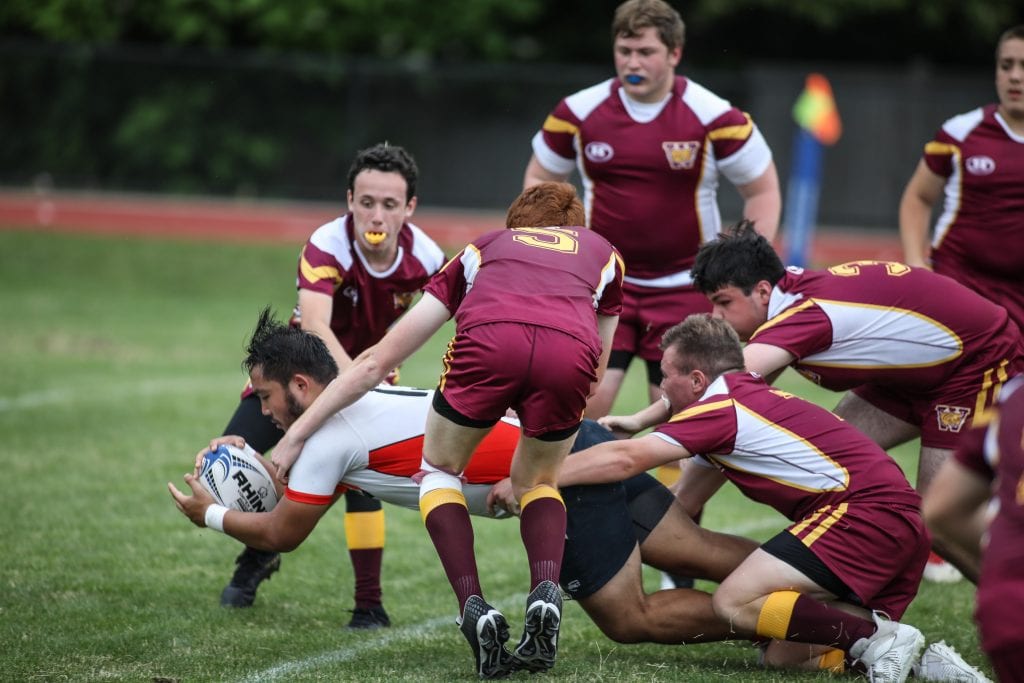 Senior captain Liam Collins dives over the goal line to give Hingham the lead. 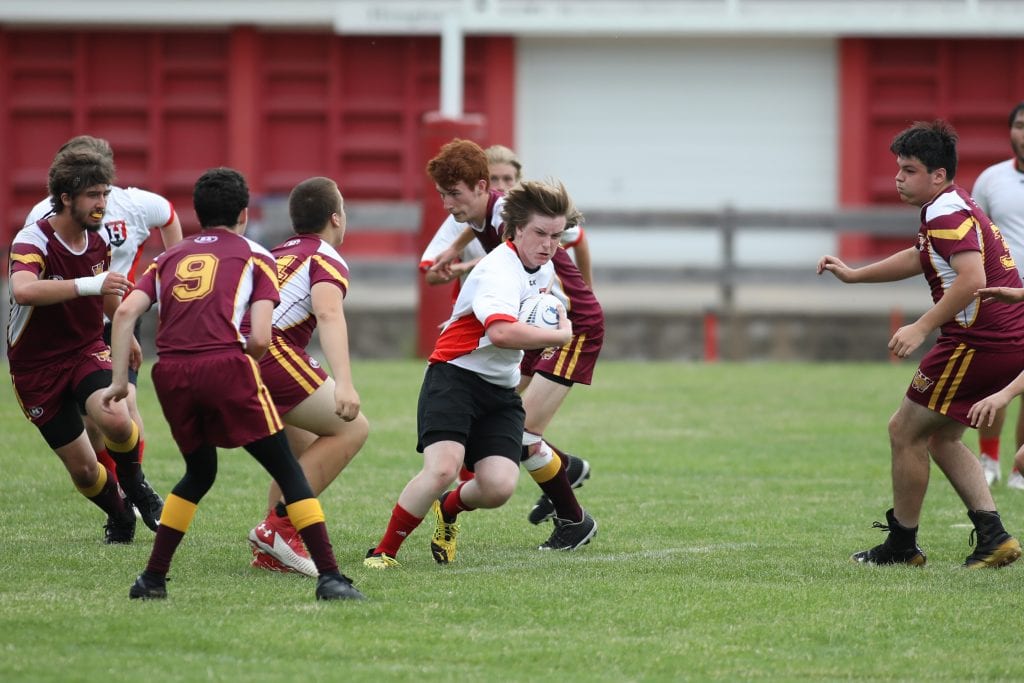 Junior Eoin Darlington takes the ball on the kickoff. 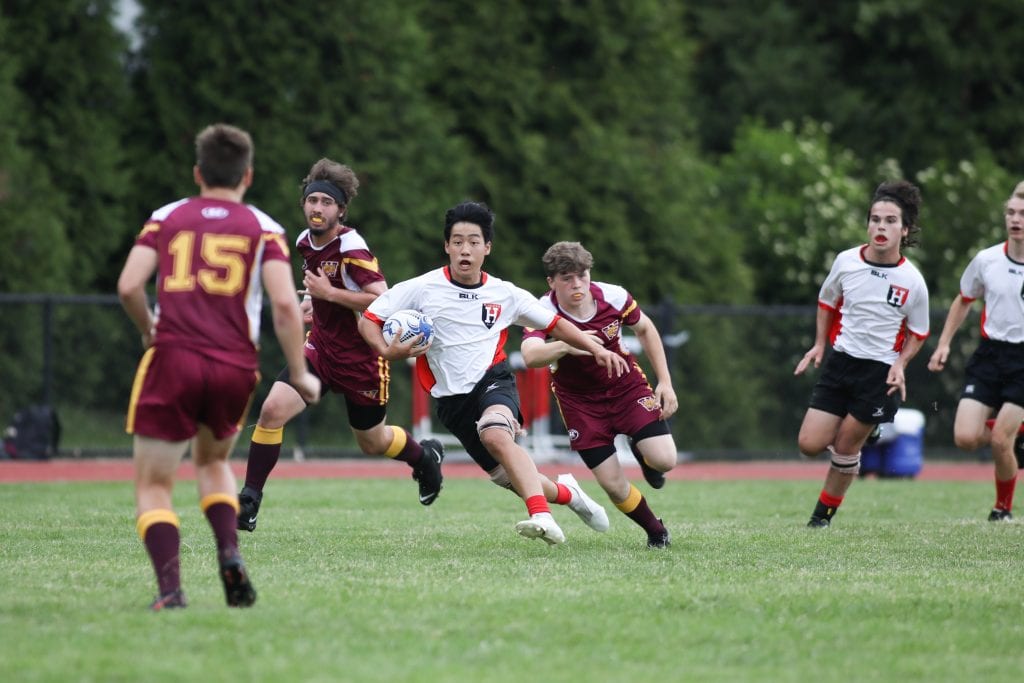 Sophomore Aiden Chan eludes tackles as he makes his way up field. 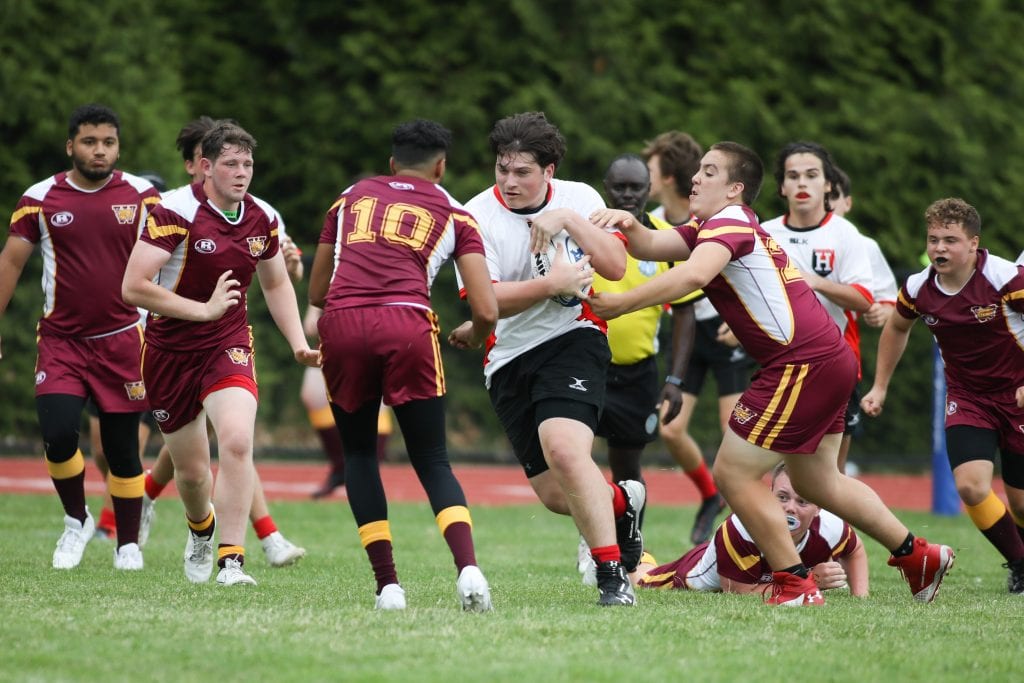 Sophomore Brian Barnard makes it hard for teams to take him down. 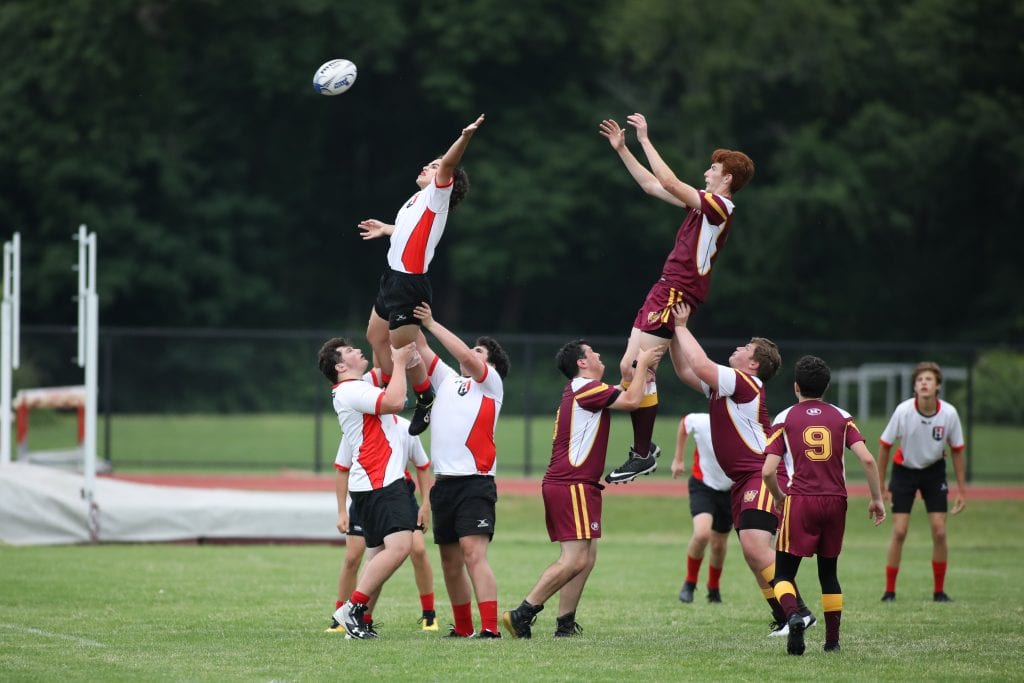 Junior Griffin Drinkwater tips the Weymouth throw in resulting in a turnover. 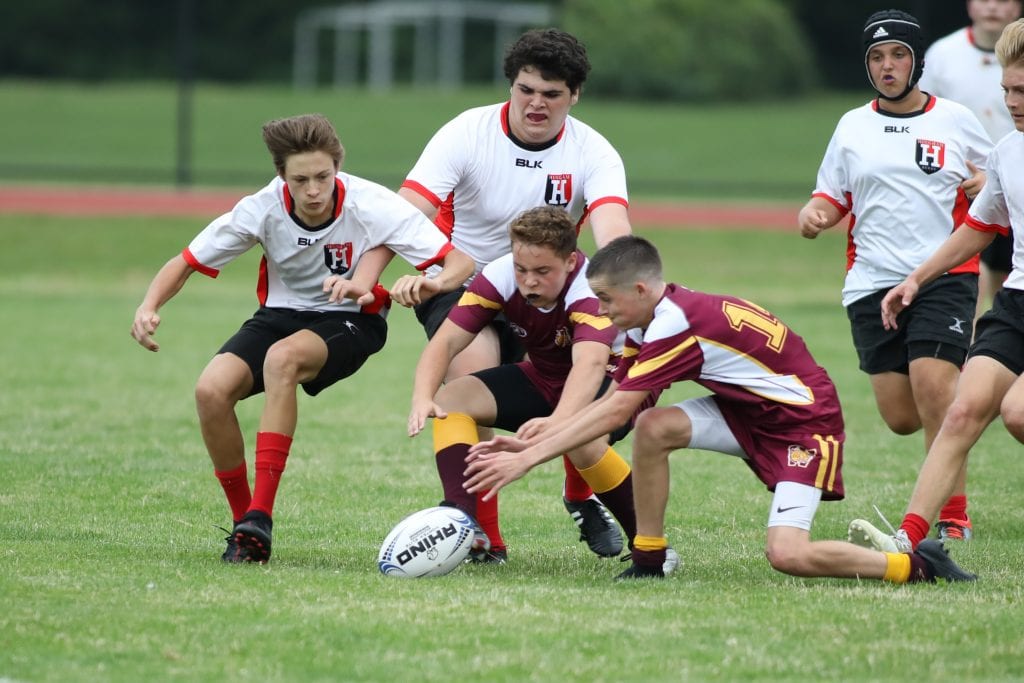 Scramble for the loose ball. 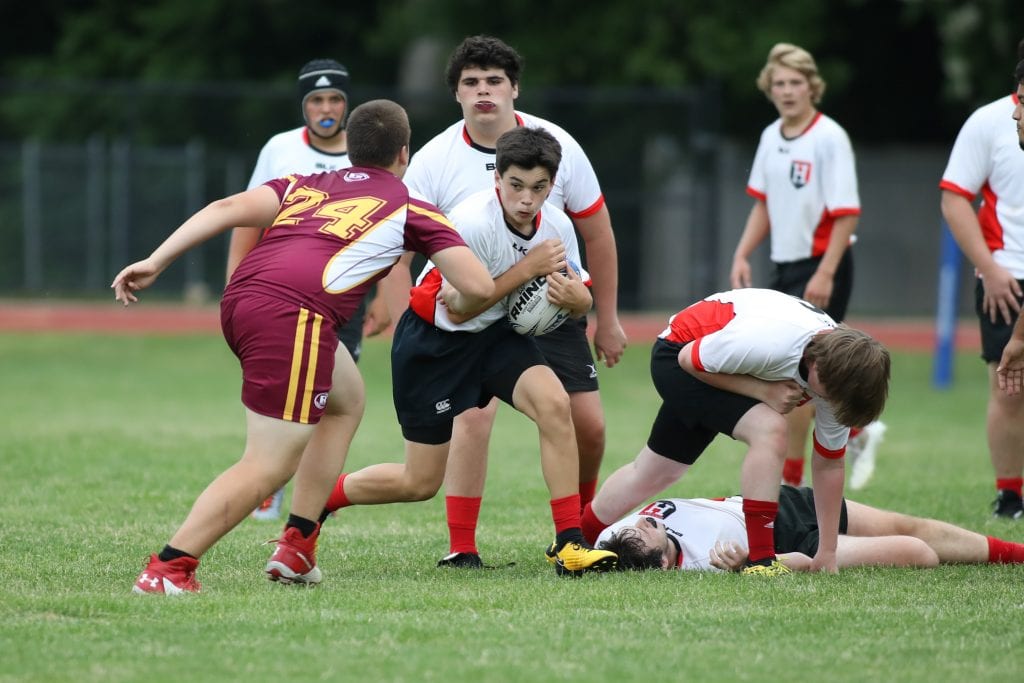 Sophomore Liam Burns keeps the ball himself out of the scrum. 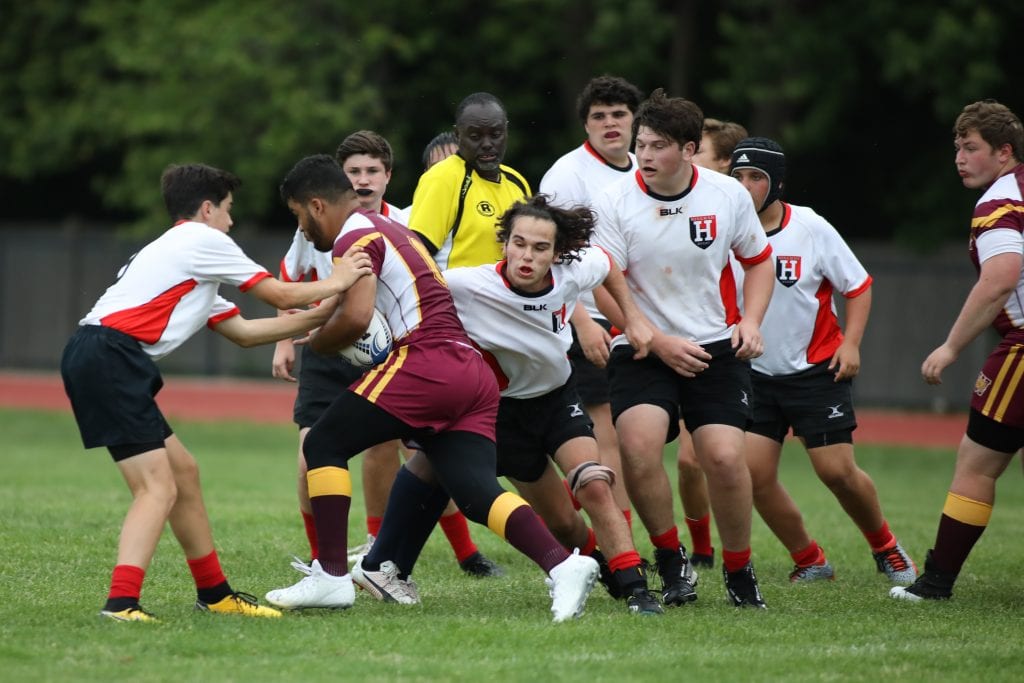 Junior Griffin Drinkwater wraps up the one of the better Weymouth players. 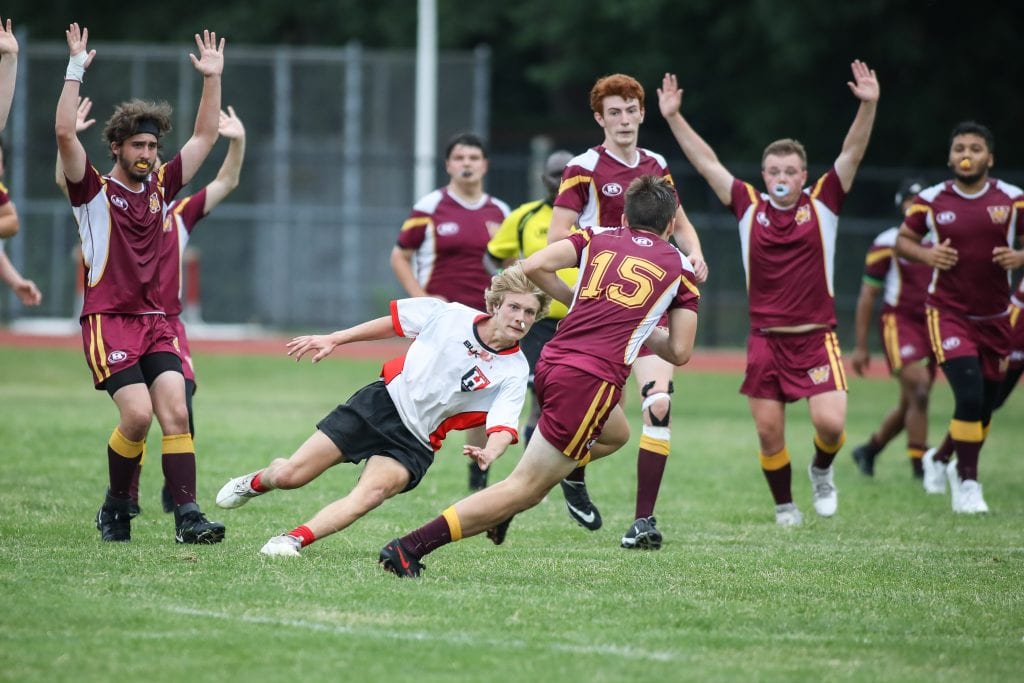 Senior John Thompson slips as he goes to make a tackle. 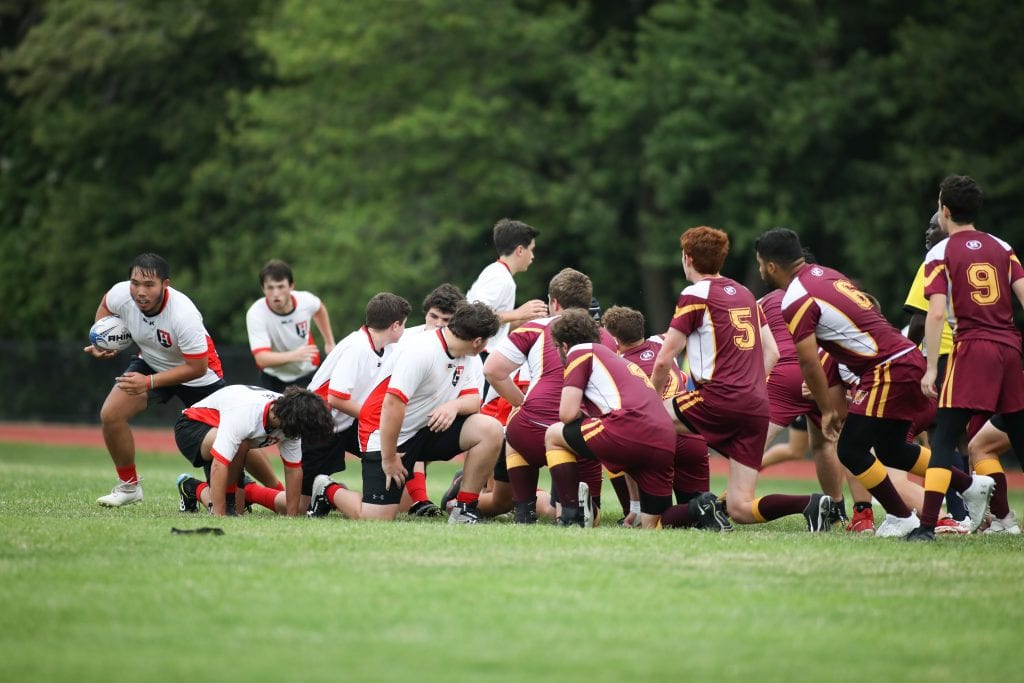 Senior captain Liam Collins sneaks out off the edge of teh scrum. 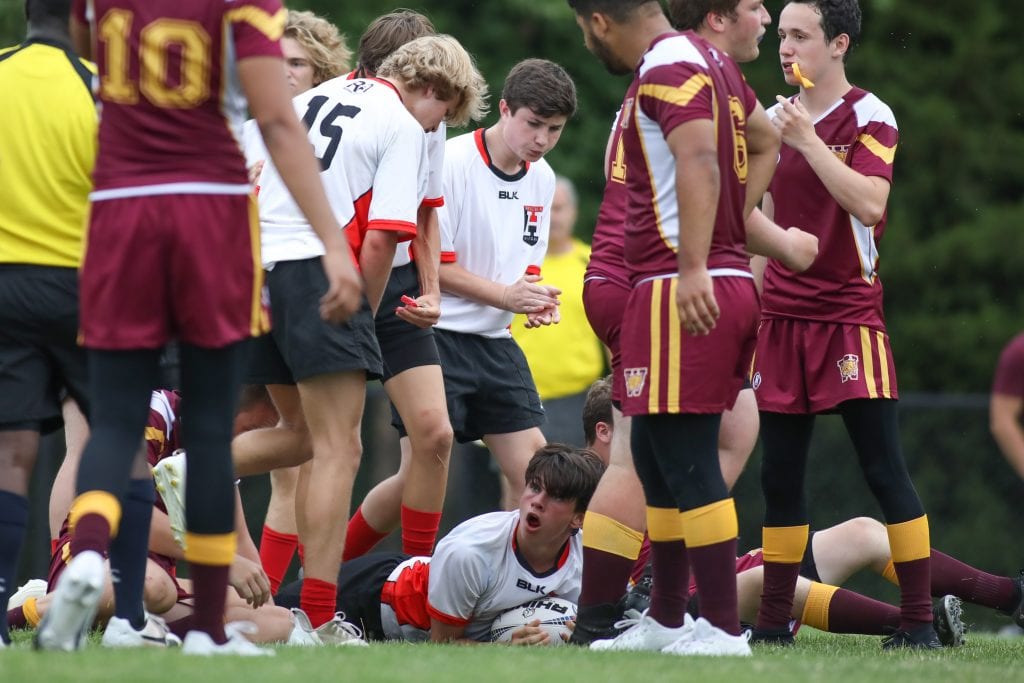 Sophomore Aiden Stewart looks to the ref for the signal confirming his try. 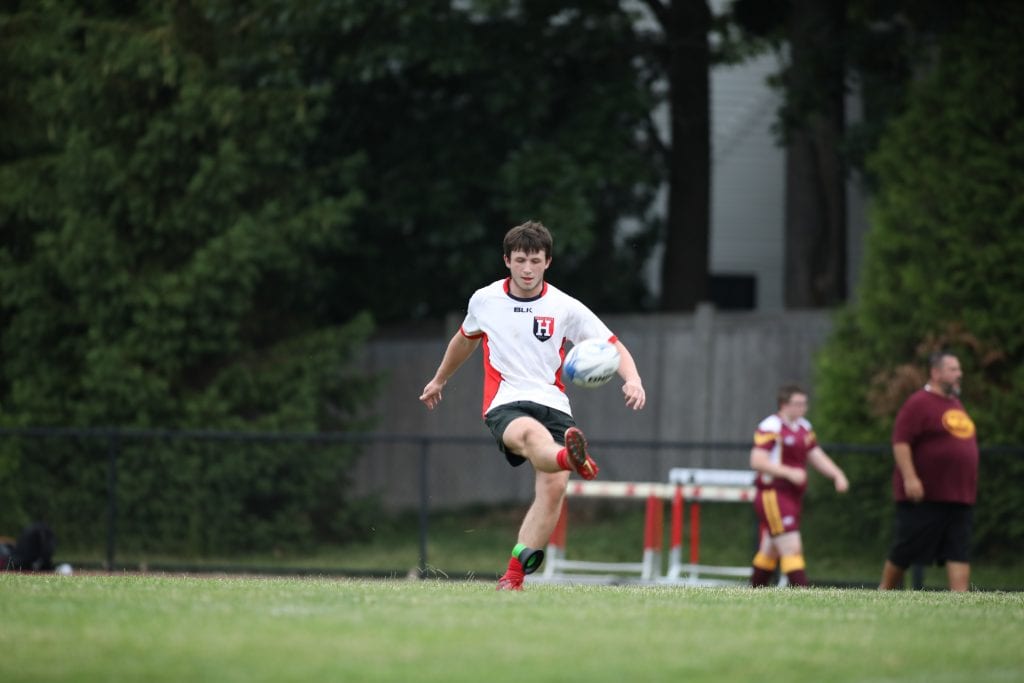 Sophomore Jayce Mellish was 6 for 6 on conversions. 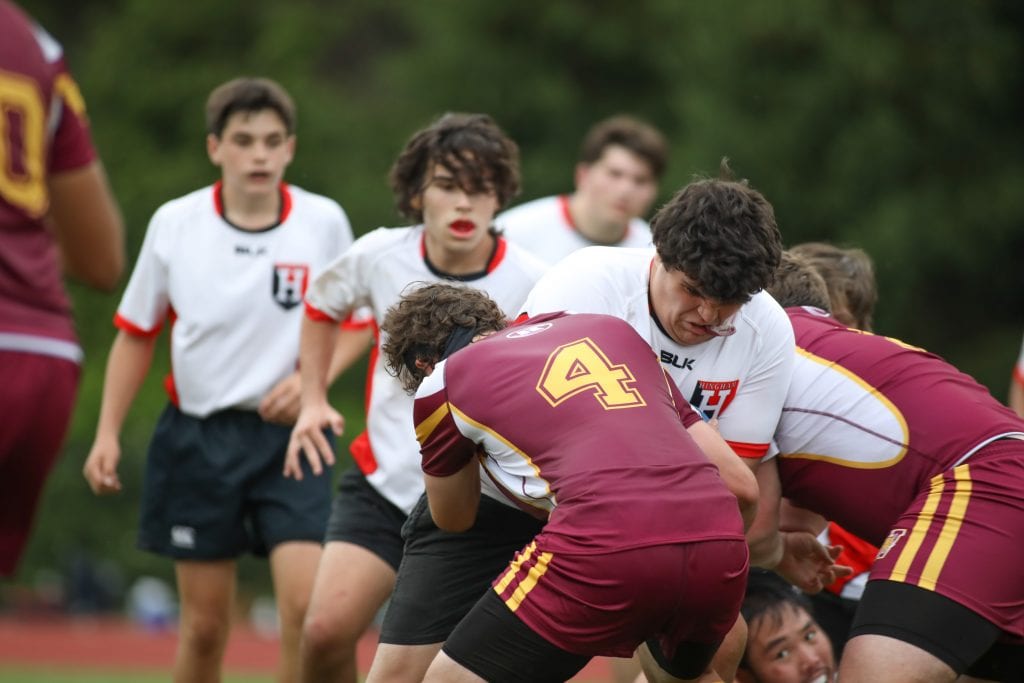 Junior Declan Bareo couldn't be stopped at the goalline late in the game. 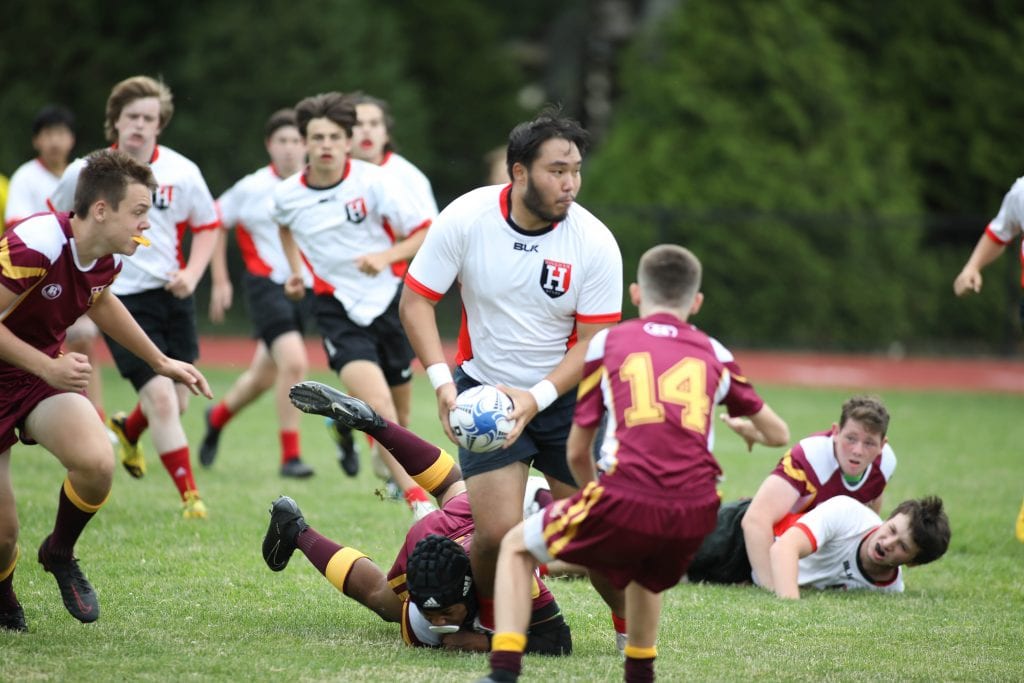 Senior captain Liam Collins passes before he gets tackled. 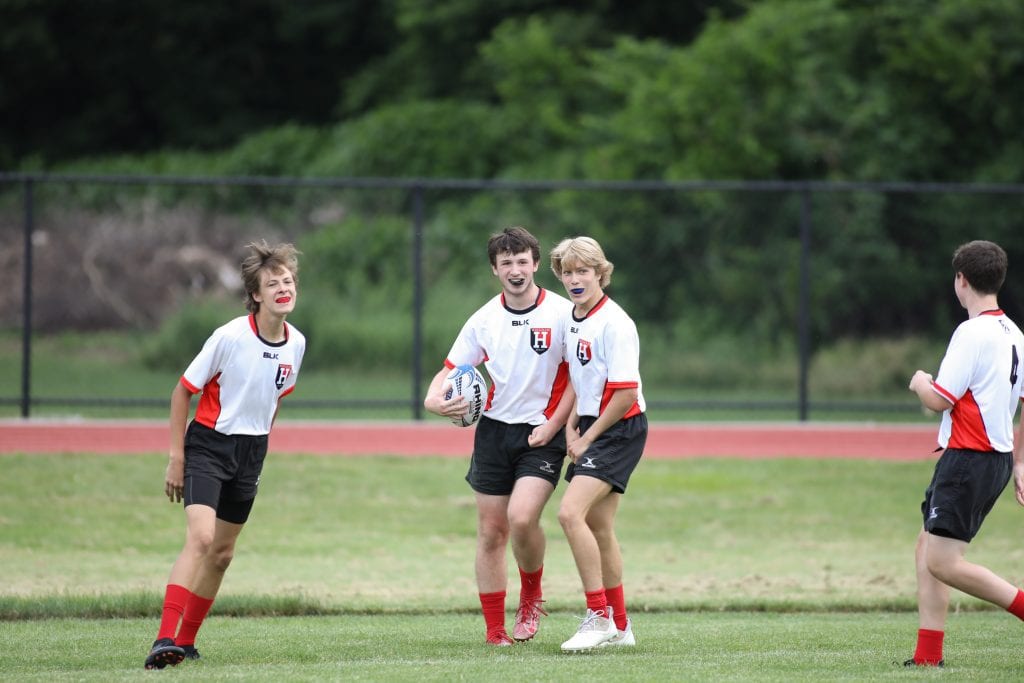 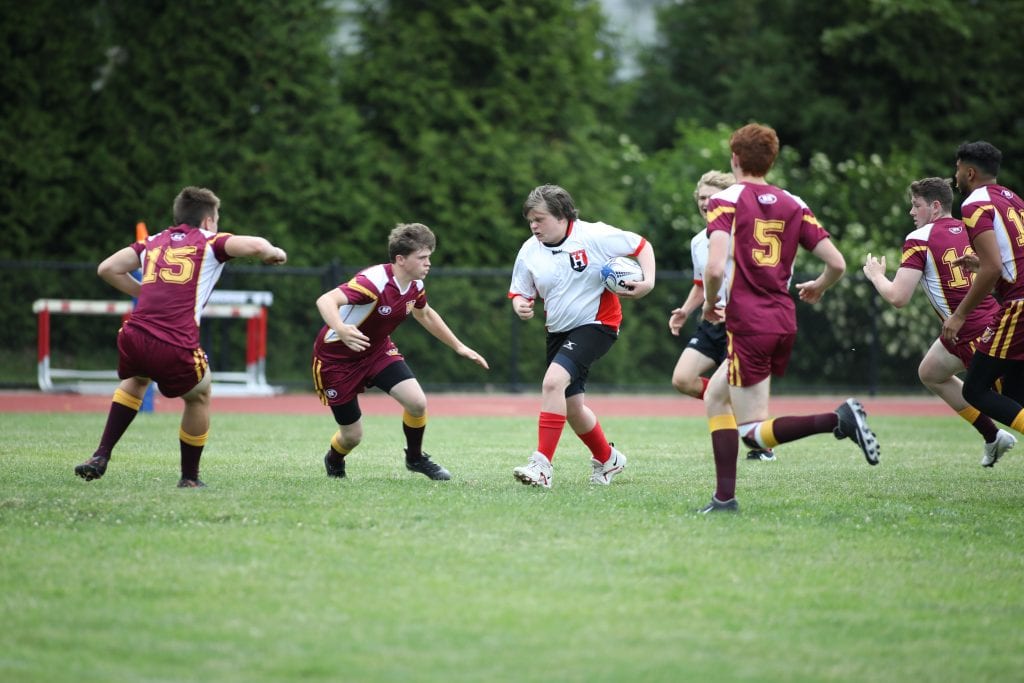 Freshman Connor Hill looks for a hole early in the game. 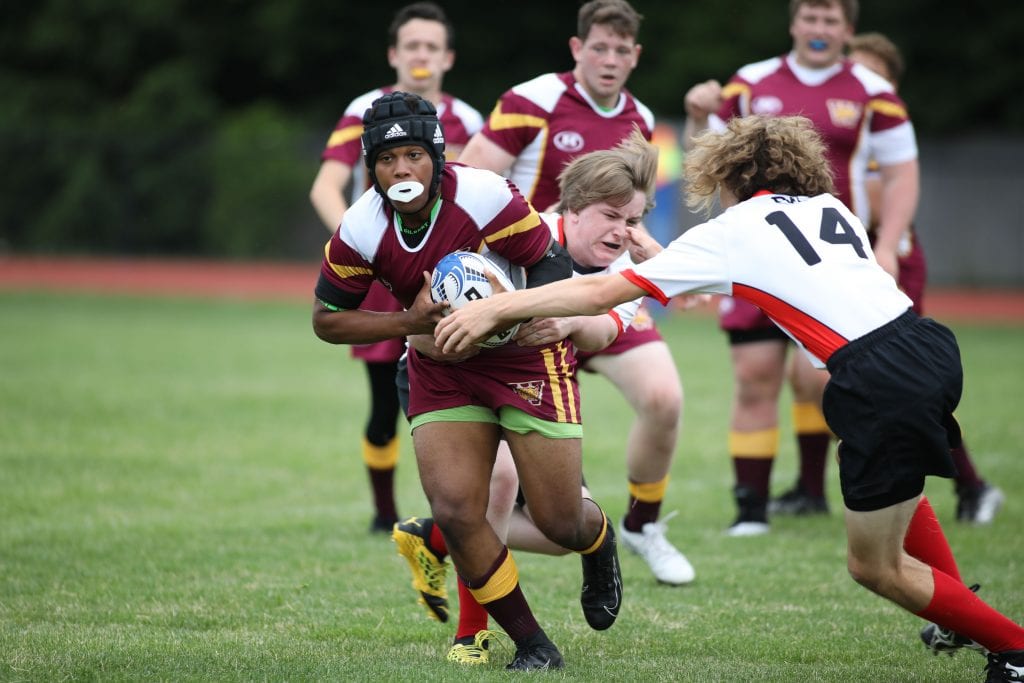 Junior Eoin Darlington makes a tackle early in the game. 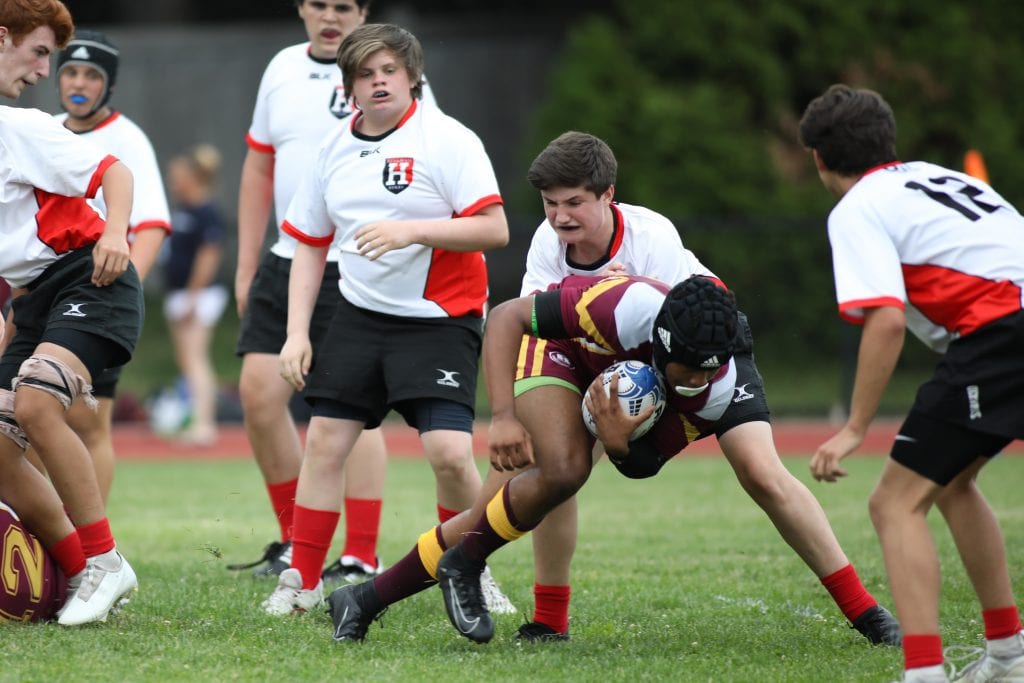 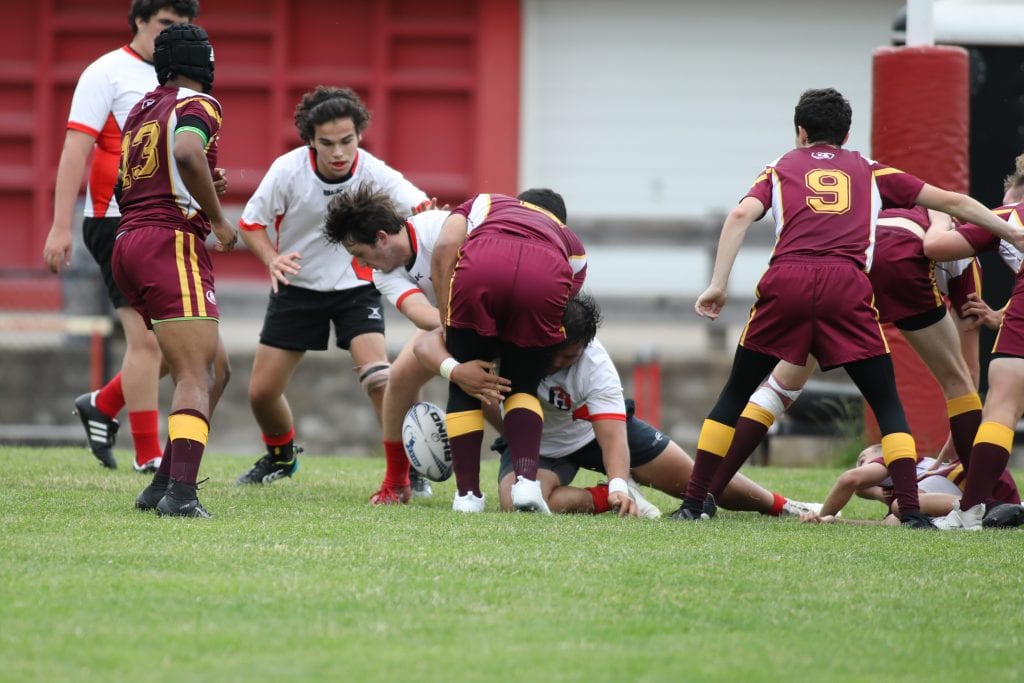 Senion captain Liam Collins and sophomore Jayce Mellish knock the ball loose in the second half. 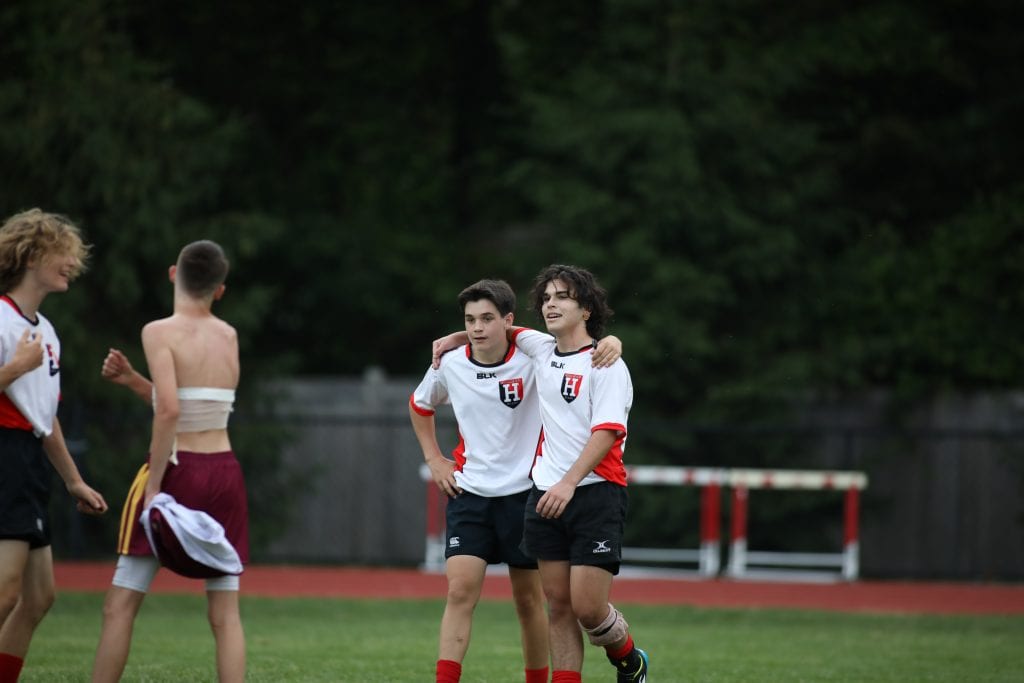