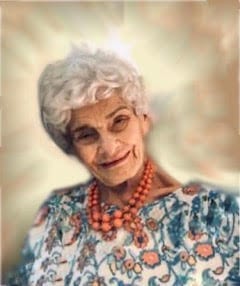 The youngest of her family, Helen and her siblings were raised by their aunt and uncle after their mother died. Growing up during the Great Depression made her appreciate the many things we take for granted today. When asked about the hardship, she would put it in perspective and say, "I didn’t think we were poor, because everyone else was in the same boat.” She carried that grounded outlook and positive attitude throughout her life. At 42, with the premature passing of her first husband Jim, she became a single mother. As she did with every other challenge in life, she accepted the task, met it head-on, and made it work. She worked full time and mothered full time. There were no days off and no excuses and none were needed. With the help of her brothers and sisters, her family remained strong. A few years later, while attending a church “casino night” with her sister, she won a Caribbean cruise. She met her future husband on that cruise. Yes, God does work in mysterious ways. She and Rocky were a fun and loving couple. They were also caring and selfless. When her first husband’s mother took ill at 80 years old, Helen and Rocky again accepted the task and met it head-on. They converted the backroom in their tiny Hingham home and made it hers. They physically moved her from New Jersey and made her part of their family. They didn’t just accommodate her. They welcomed her and doted over her. They included her in everything they did. Their love and kindness extended her life by years, restored her dignity, and brought her untold happiness.

Helen liked people and she liked working. She started her first job as a teenager and when she moved to Massachusetts in 1973, got a job as the only secretary in a small office in Braintree. She was still working in that office at the age of 85. She also loved good food, playing cards with her brothers and sisters, and going to the casino. She loved swapping boxfuls of Harlequin romance novels with her sister. Most of all, she loved her boys, their wives, her grandchildren, and her one great grandchild that she never got to hold because of COVID concerns. She was from a different era with simple, but steadfast beliefs and values. She was humble and never wanted to be the center of attention, but always gave so much and helped so many. Her passing is a sadness, but also a celebration, because she lived a long and amazing life and she lived it well.

Relatives and friends are respectfully invited to attend the visiting hours on Friday 4-8 PM in the Pyne Keohane Funeral Home, 21 Emerald St. (off Central St.), HINGHAM. A Celebration of Life Service will be held in the funeral home at 9:15 AM on Saturday prior to the Funeral Mass in St. Paul’s Church, Hingham at 10 AM. Burial in St. Paul’s Cemetery, Hingham. In lieu of flowers, donations in memory of Helen may be made to Old Colony Hospice, 321 Manley Street, W. Bridgewater, MA 02379-1022.