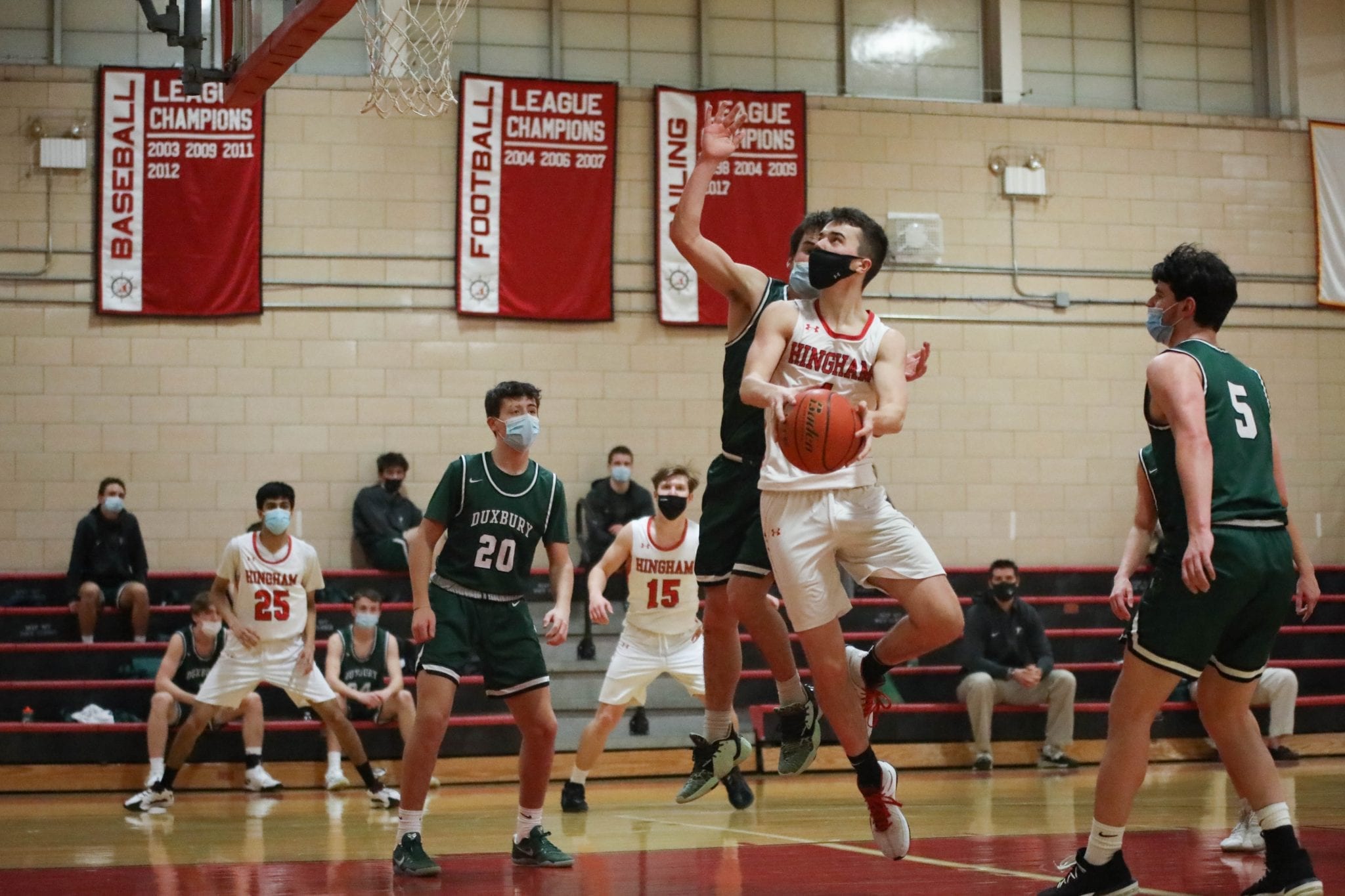 “It’s a team sport” is a phrase not always associated with basketball.  One or two great players can and usually does make a team. However, Hingham boys basketball and Head Coach Bob Kniffen are redefining “team basketball” this season.  With their senior captain and one of their leading scorers Steven White out for the remainder of the season, the Harbormen have managed to get everyone involved.  No more apparent than Friday night against Duxbury as 11 players scored in Hingham’s 79-51 win.

“I can’t say it’s surprising because it’s not the first time this year it’s happened,” say Kniffen.  “I think over the first 5 games, we had 5 different leading scorers.  We’ve had 10, 11, 12 guys score (in a game) over the course of the season. That’s just the type of team we are.  When we are the most successful is when we have a lot of guys contributing.”

Last night’s game was the second of a home and home on back to back days against Duxbury.  Thursday night’s game was decided in overtime with Hingham getting the 1 point victory 71-70.  The rematch, however, was never it doubt.  The Harbormen jumped out to a 10 point first quarter lead behind senior captain Jack Hurley and junior Nick Johannes, each with six points.  They extended their lead at halftime to 45-19.  The second quarter saw 6 Harbormen score, including eight points from senior Jack McBride, who buried two 3-pointers.

The second half was highlighted by sophomore’s Liam McBride’s 11 points and junior Shrey Patel’s two 4th quarter 3-pointers, as well as very solid team defense.  Two nights ago, the Harbormen let the Dragons claw their way back from a 15 point deficit forcing OT.  Last night, they kept their feet on the gas and didn’t let up.  It was a good win in preparation of a big showdown Monday night vs Whitman-Hanson, who is undefeated this season and has won almost 30 games in a row.

“We weren’t going to give anything but our best tonight, given last night,” Kniffen said after the game.  “I was happy the way they played tonight.  We are continuing to build team basketball and we showed that tonight.  I would imagine we had more assists tonight than we’ve had any other game this season.  Good ball movement, guys moving off the ball really well and guys finding their teammates.  I told them after the game ‘it was probably the best display of team basketball we played all year.’”

When asked about the matching on Monday night, Coach Kniffen feels good about where his team stands.

Coach would like nothing more than to have White on the court playing on Monday, but says his impact will be felt off the court as well.

“He’s obviously a key loss for us.  A returning league all-star, a senior captain, and a three year varsity player.  You obviously see what he brings on the court, but he brings just as much off the court in terms of leadership and commitment to the team.  He's continuing to be a strong leader for us and a key contributor to the team.”

While spectators will be extremely limited at the game, it will be broadcast live, with play-by-play action being called by award winning broadcaster and voice of the Harbormen Greg Partykas on Hingham Athletic’s YouTube channel found here.  Game starts at 6:30pm. 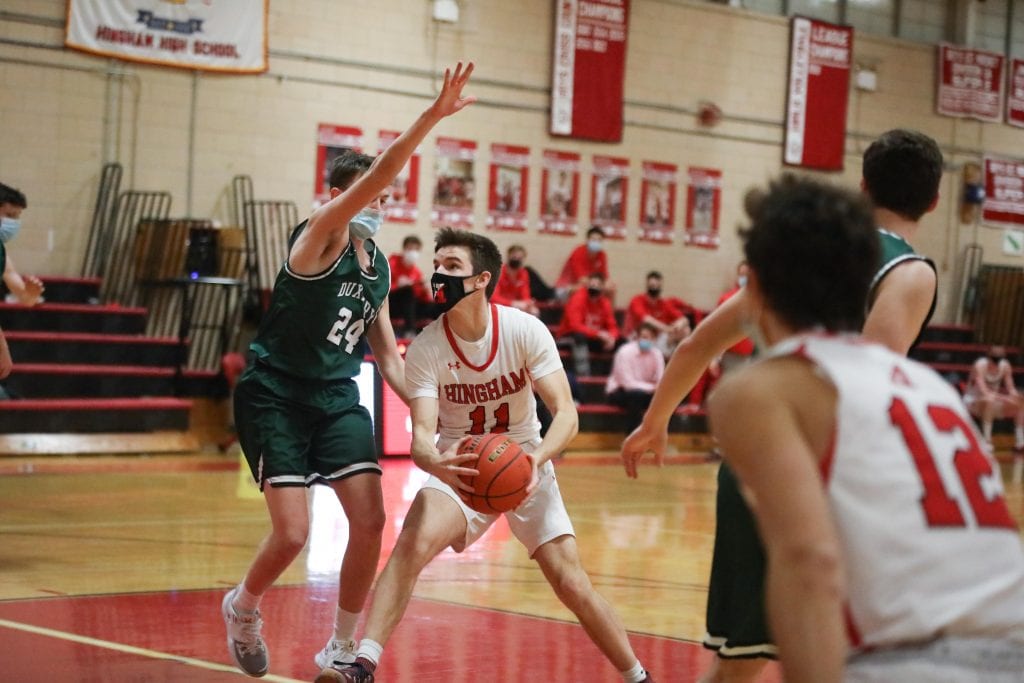 Senior Andrew Teague draws a defender as he puts up a shot. 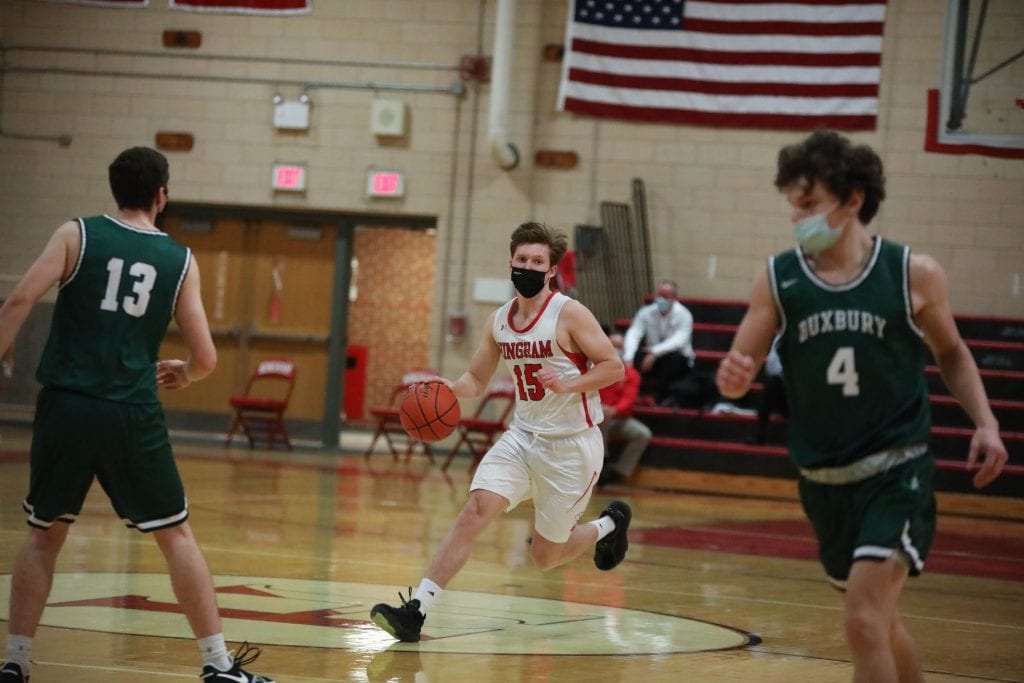 Senior Evan Williams brings the ball up the court in the first quarter. 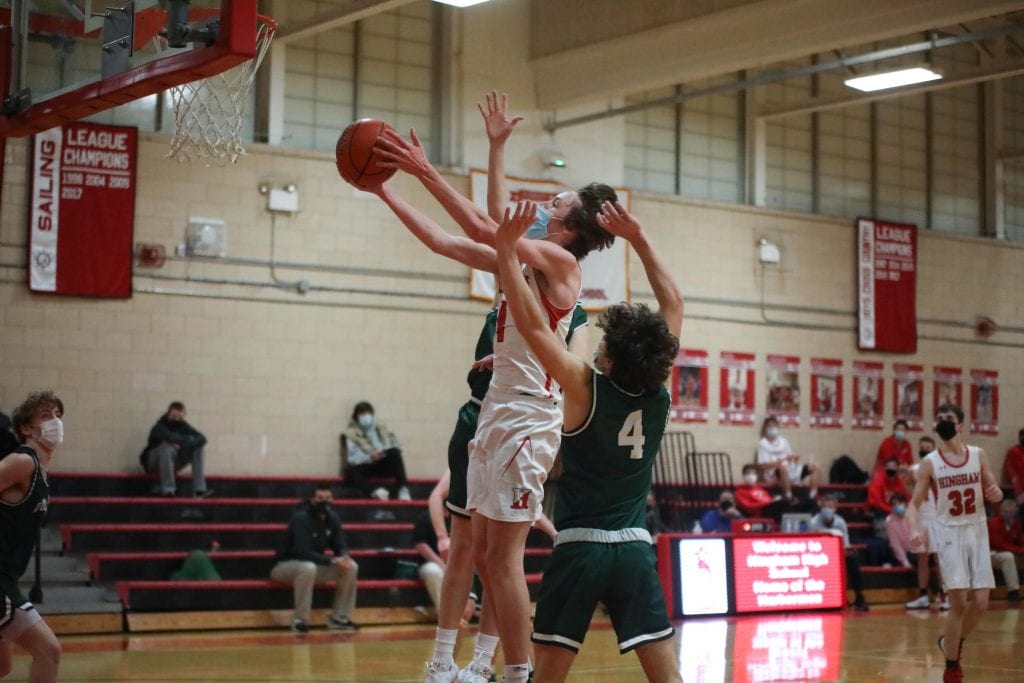 Junior Nick Johannes splits two defenders to lay it in. 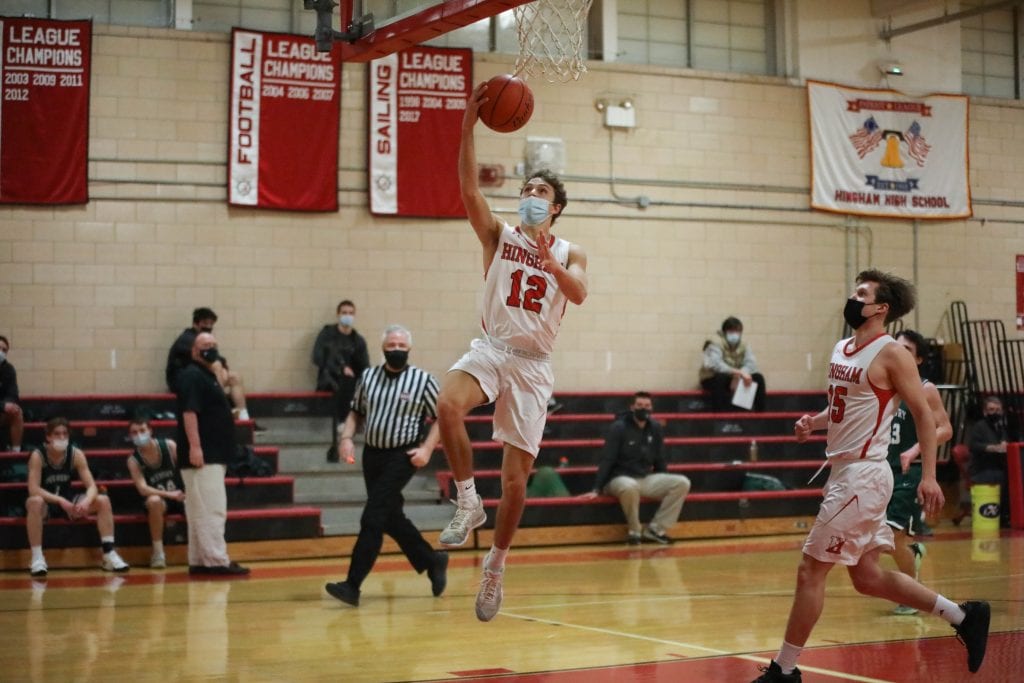 Junior John Sula went coast to coast after he steals the ball and lays it in. 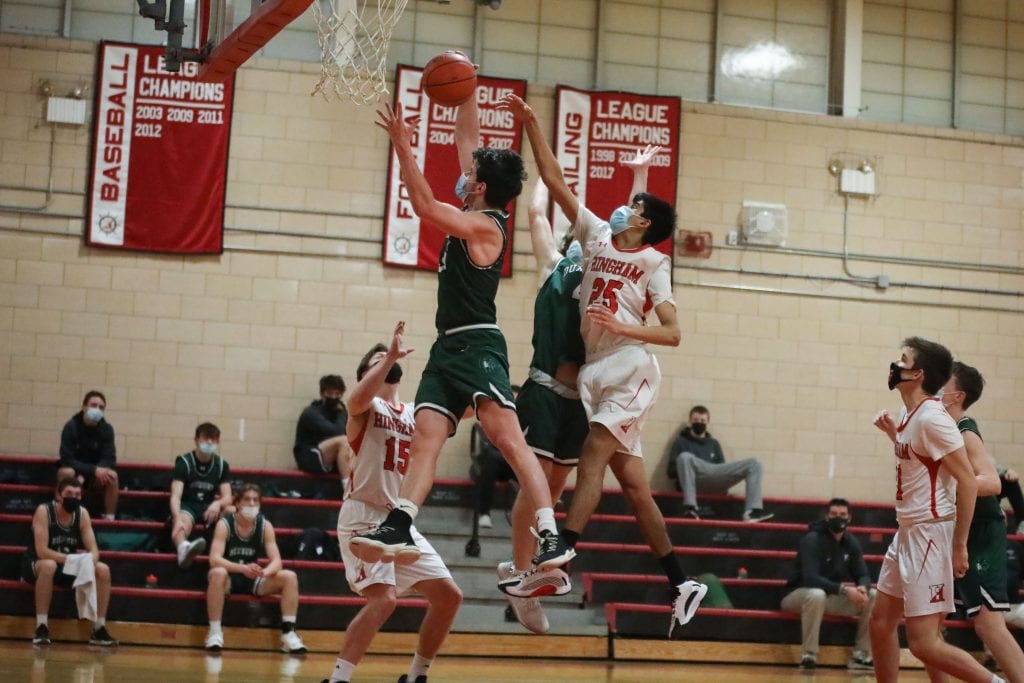 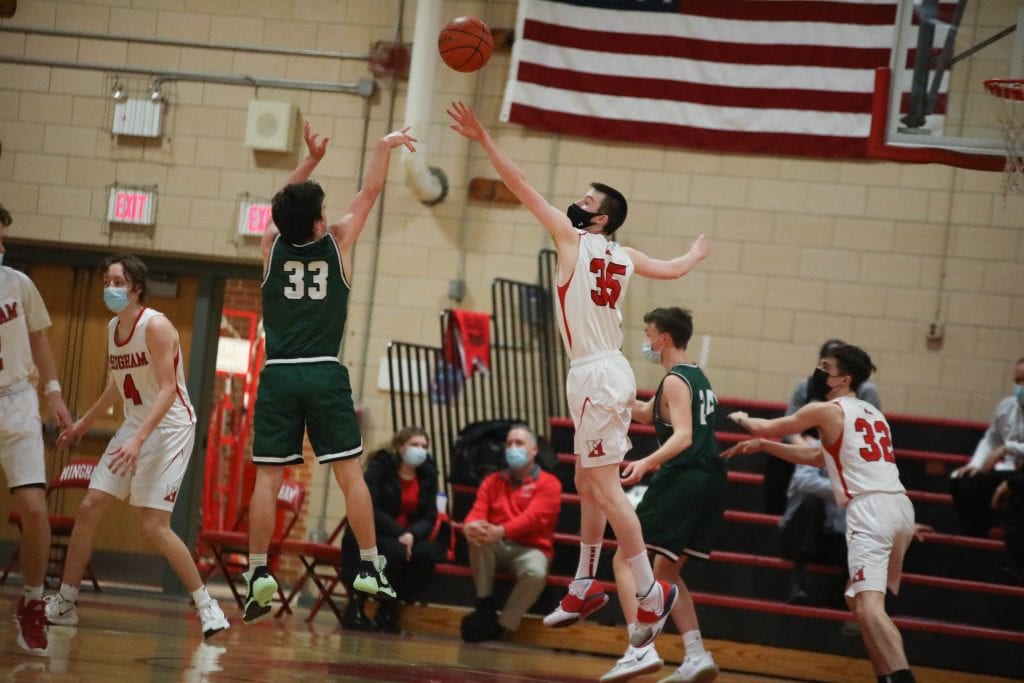 Senior Connor White gets a hand in the face of a Duxbury shooter. 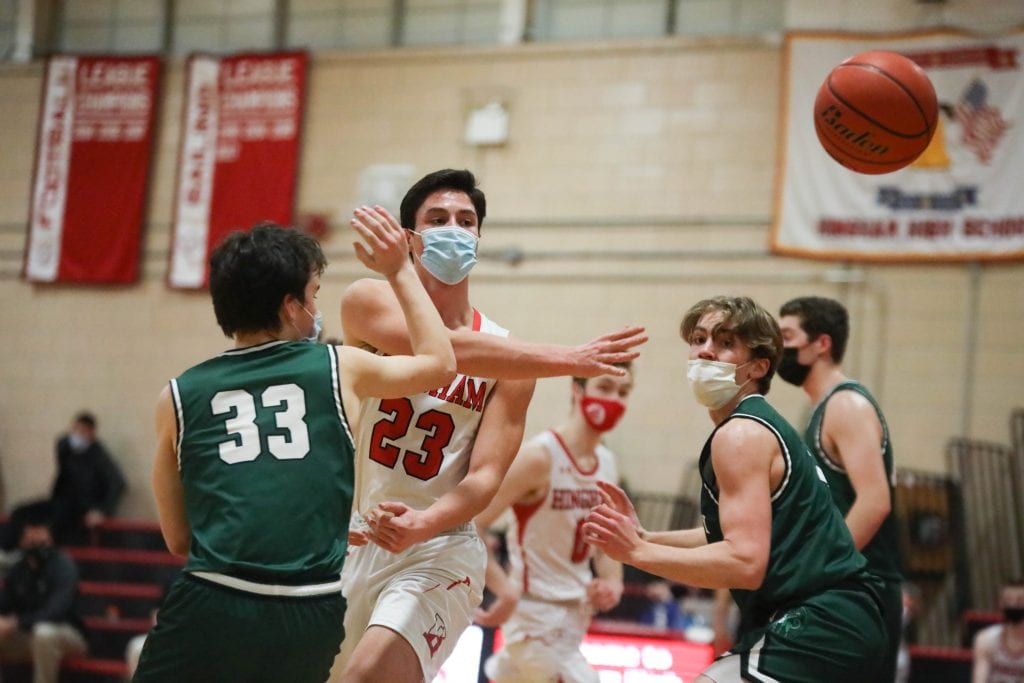 Senior Nate LaRhette makes a quick pass as the defense collapeses on him. 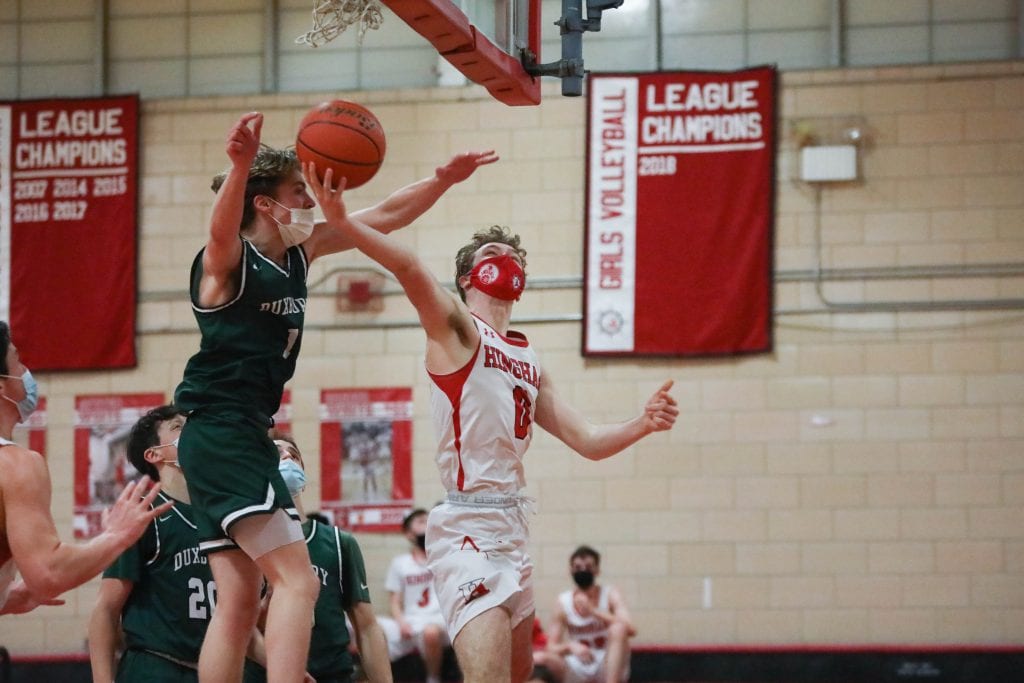 Senior captain Jack Hurley gets fouled under the basket in the third quarter.

Junior Curtis Murphy goes up strong and gets fouled on the the play.

Junior Shrey Patel buries one of his two 3-pointers in the 4th quarter. 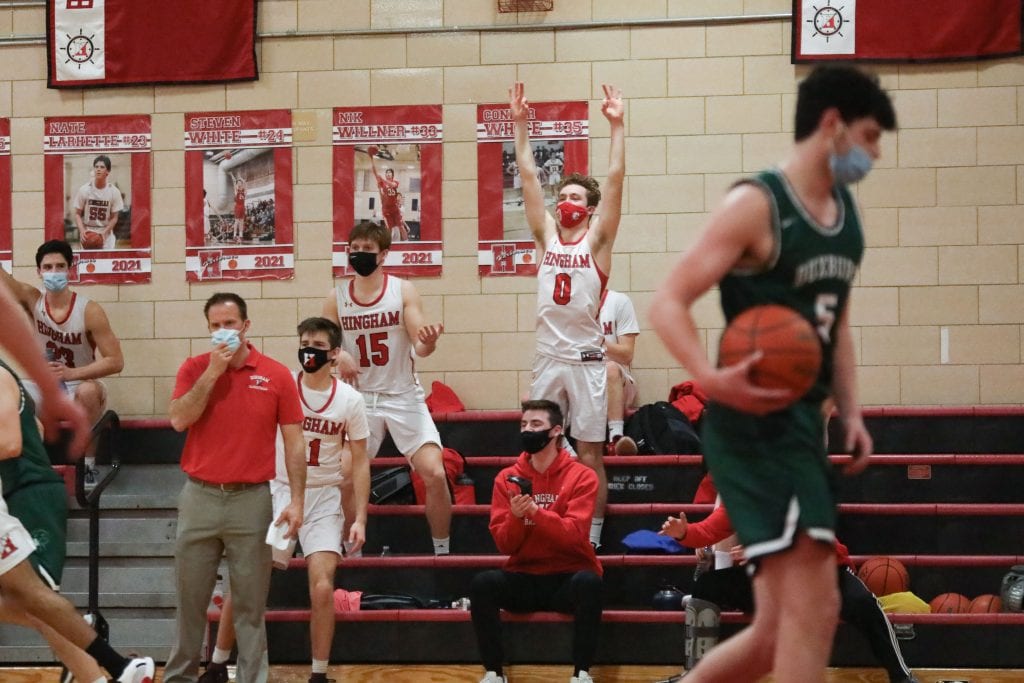 The bench goes nuts as Patel hits his shot. 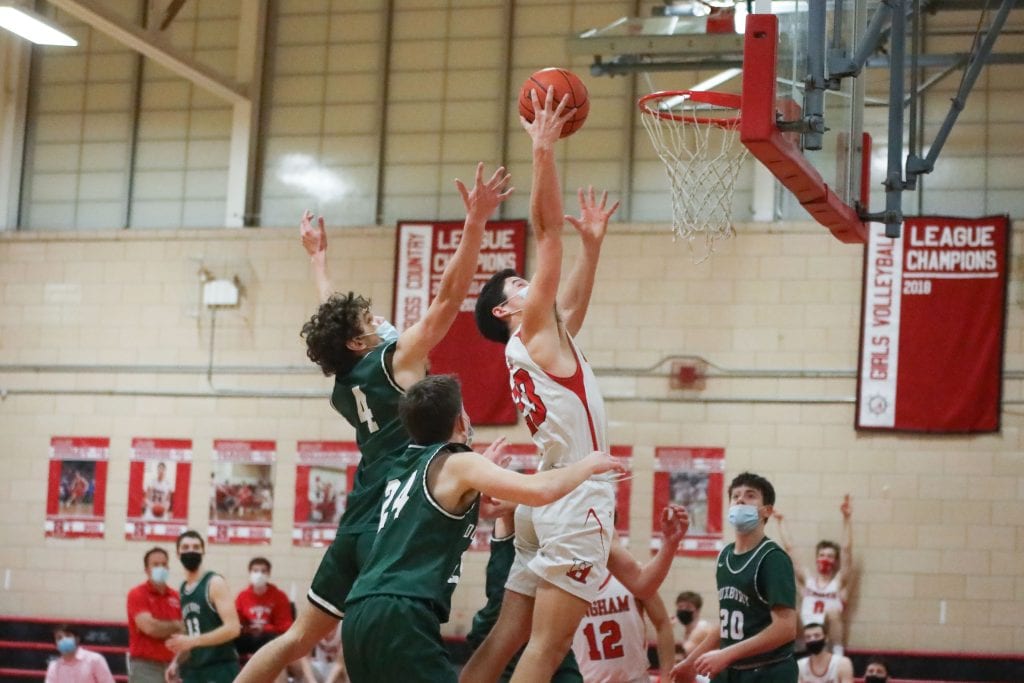 Senior Nate LaRhette grabs a rebound late in the game.