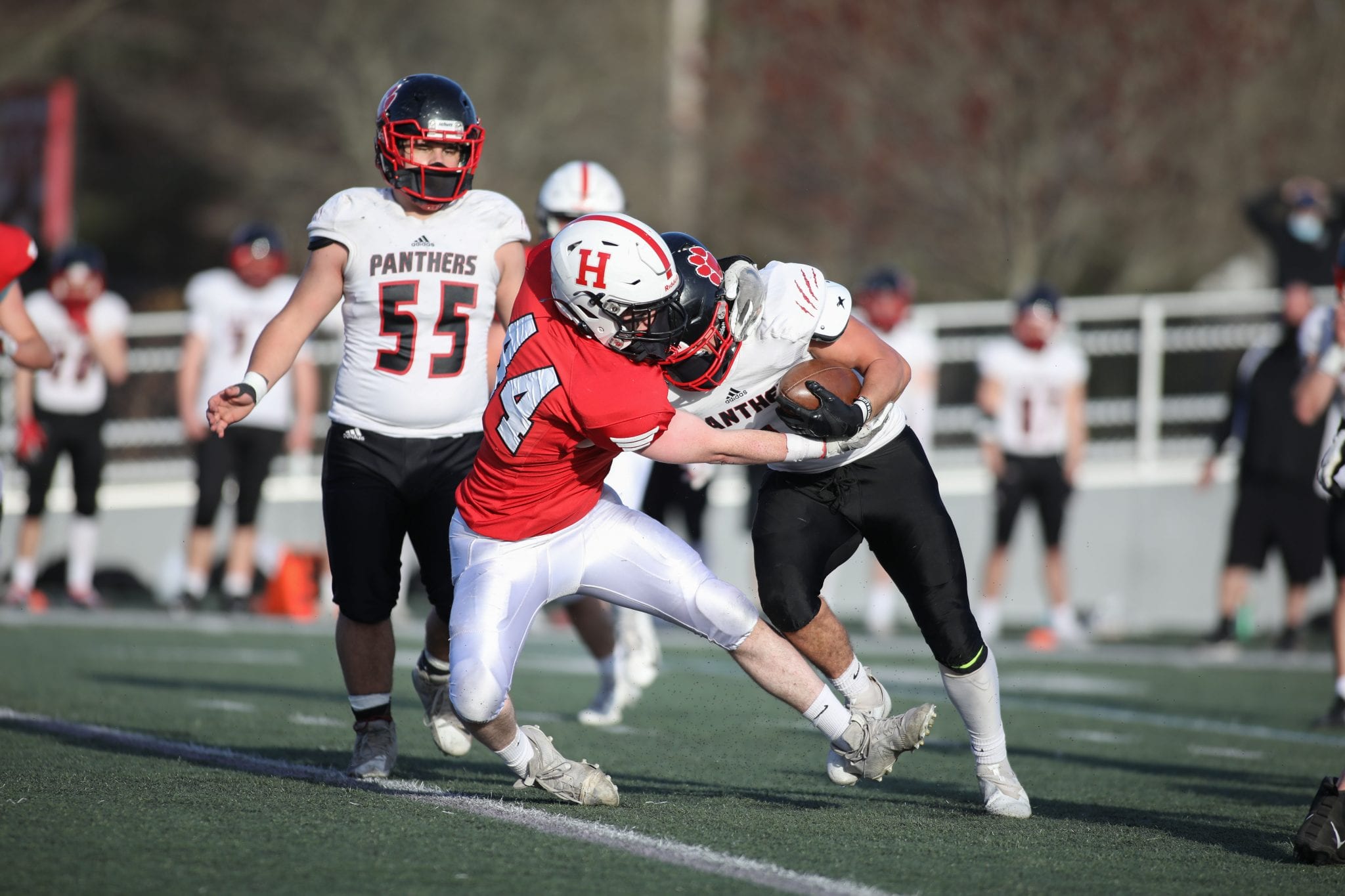 As a limited amount of fans and family crowded the stadium at Hingham High School, the Harbormen took the field against the Whitman Hanson Panthers. Coming off a close win against Silver Lake last week, the Harbormen played possibly the final game of the season. Because of the uncertainty of the Patriot League schedule, this game was designated as Hingham’s senior night.

The Panthers won the coin toss and elected to receive the ball first. The Harbormen defense forced a quick three and out before putting together a solid drive of their own. Junior quarterback Dylan Pierce connected with senior Cooper Estes over the middle for a 21-yard pass play before Whitman Hanson’s defensive line shut down all offensive opportunities. The ball continued to be punted back and forth between the two teams for the rest of the first quarter, with no scores.

The second quarter produced more offense for both teams. The Harbormen were driving at the beginning of the quarter, relying on the passing game. Pierce found Estes for another 17 yards, but his next pass was intercepted by Whitman Hanson’s Nikolas Dolan. Then, a big run play by senior Cameron Cummings set up his team in the red zone. Hingham stopped the Panthers on the 1-yard line, but a 4th down quarterback sneak by Cam Burrows put seven up on the board for Whitman Hanson.

Hingham’s next series was without success, and the defense took the field yet again. Coach Mark Nutley talked about the Panther’s defensive effort, pointing out that, “we had a hard time picking blitzes up,” and that the Harbormen made, “mistakes that we got to get better on, plain and simple.” Despite these mistakes, senior captain John O’Conner stripped the ball on a quarterback sneak, and junior Will Griffin fell on it to give possession back to the Harbormen.

Pierce and his offense then put together an offensive series that tied up the game. A fantastic 4th down catch by senior Matthew Lahiff set up Hingham on the 5-yard line. Soon after, Pierce completed a pass to Estes in the back of the endzone with 1:46 left in the half. Whitman Hanson was unable to get any offense going in the final seconds, and the two teams went to halftime tied 7-7.

The second half was dominated by Whitman Hanson’s run game and defensive line. Nutley attributed this to the “short fields on offense,” that the Hingham offense gave away. The Panthers shut down Hingham’s drive at the beginning of the quarter and drove down to the goal line. A great effort by the Harbormen defense kept the offense to just a field goal.

However, with Pierce pressured on almost every play and the run game not working for the Harbormen, the offense could not capitalize on the defensive effort. Three minutes into the fourth quarter, sophomore Will Frazier ran in another Panther touchdown. The Panther’s special teams unit made the game 17-7, ending the scoring for the rest of the game and winning the game for Whitman Hanson.

This win was incredibly notable for the Panthers. Three hours before the game, the athletic director for Whitman Hanson announced the retirement of head coach Mike Driscoll. The game was the ten-year veteran’s last matchup. The scene was very emotional for the team, who cheered and celebrated this last win for their coach.

Hingham was also affected by the loss. To lose one of his last high school games was difficult, said Estes. “It’s not the way I wanted to possibly end my career but sometimes it’s how it goes.” Additionally, he highlighted the bond the team has created over football, mentioning, “After playing with some of these guys for a full decade it’s [going to] be hard just to walk away.” Senior Captain Dan Hannon also touched on the moving loss, calling the game, “Pretty heartbreaking,” and, “I just love these guys and it’s great being here with them on this field.”

Hingham does not currently have a game for next week, despite cancellations earlier on in the season. Click here to see the live stream of the game.

Updated: Next game for the Harbormen has been scheduled for 4/16 at Marshfield at 6:00pm. 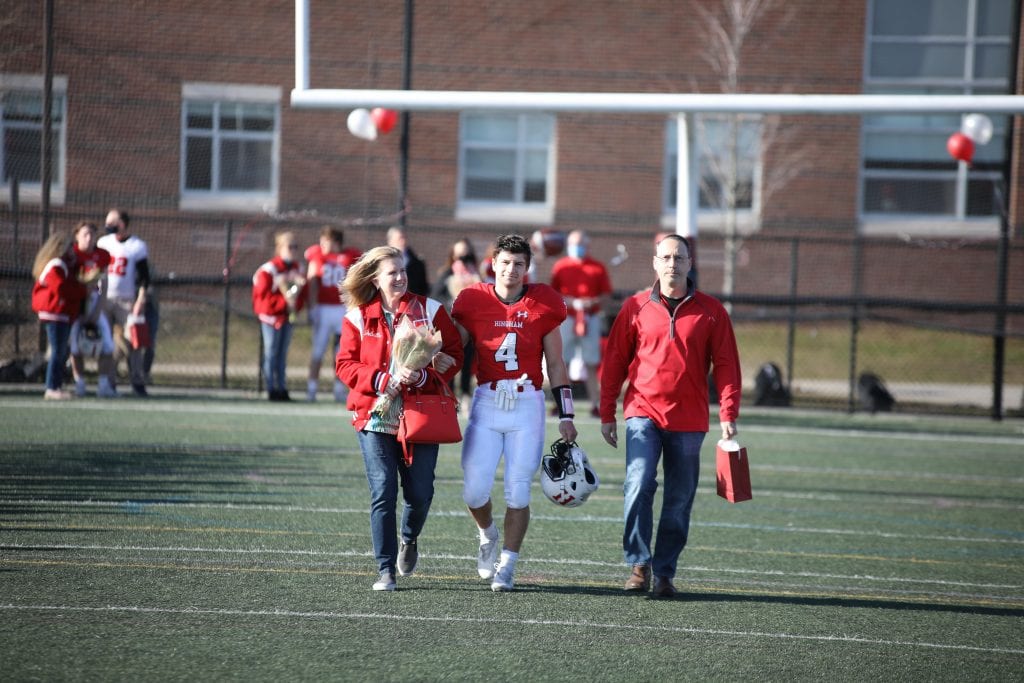 Patrick Petrillo and his parents Jennifer and Pat. 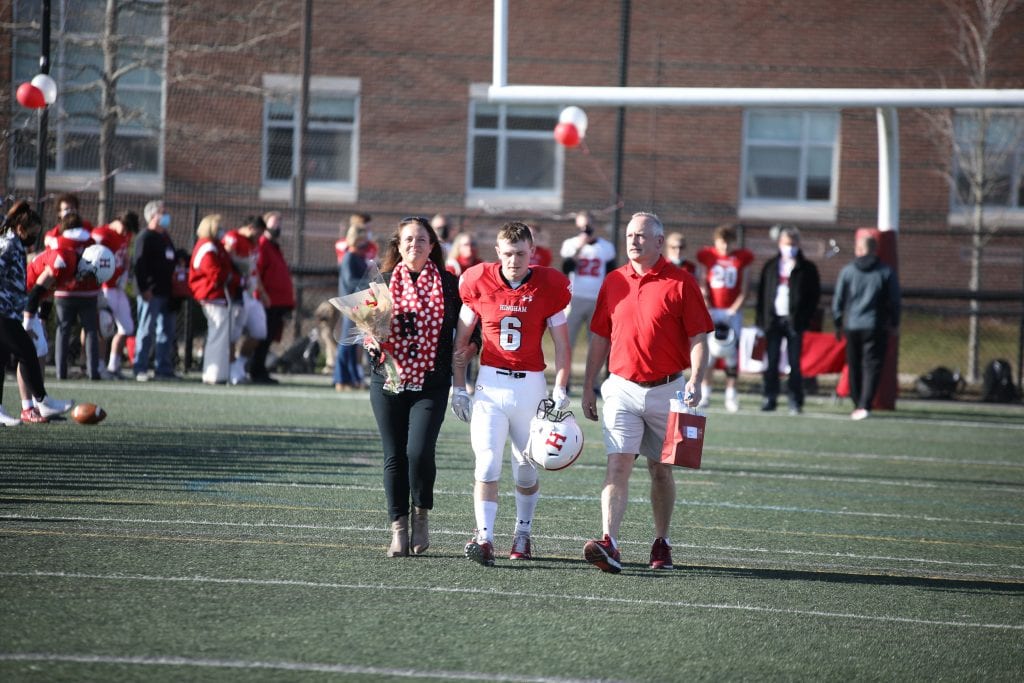 Drew Kenn and his parents Michelle and Russ. 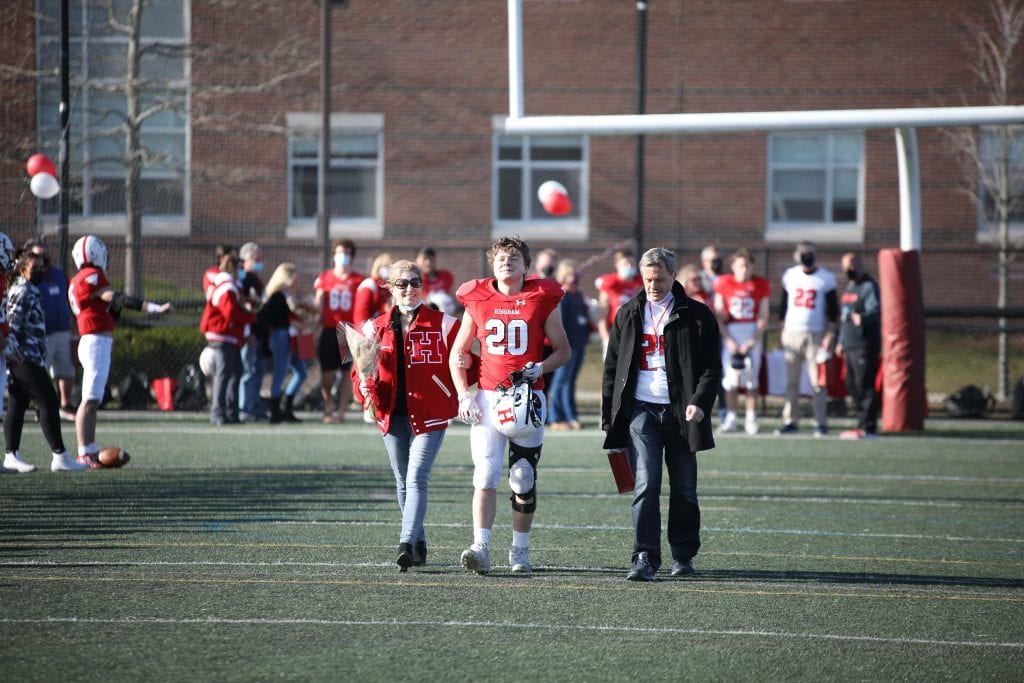 Grant Vanzura and his parents Liz and Rick. 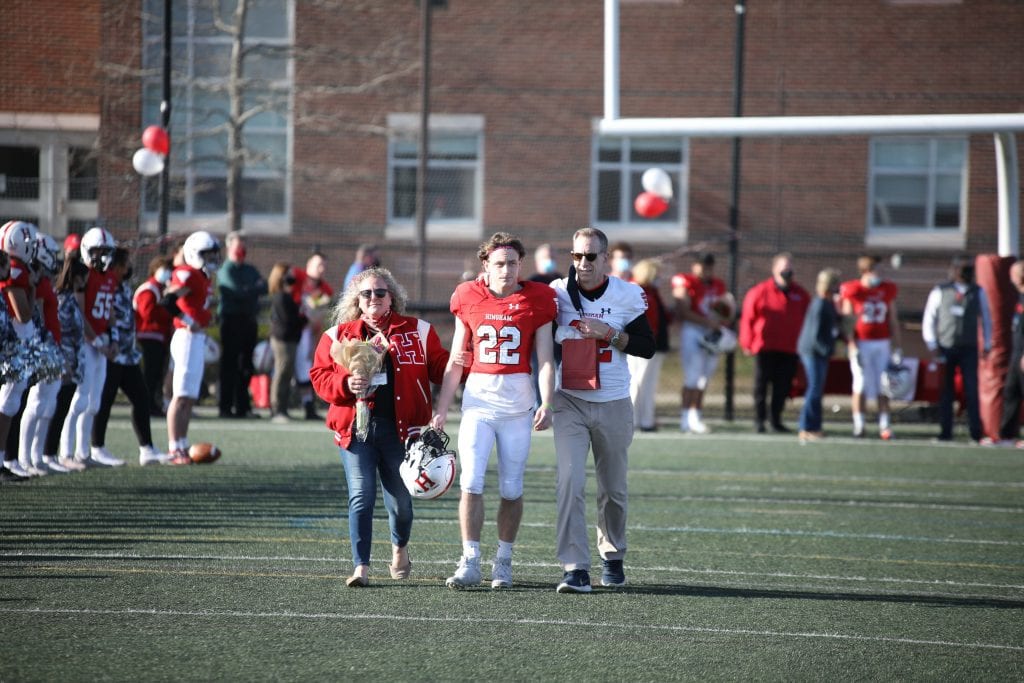 Cooper Estes and his parents Jennifer and Ray. 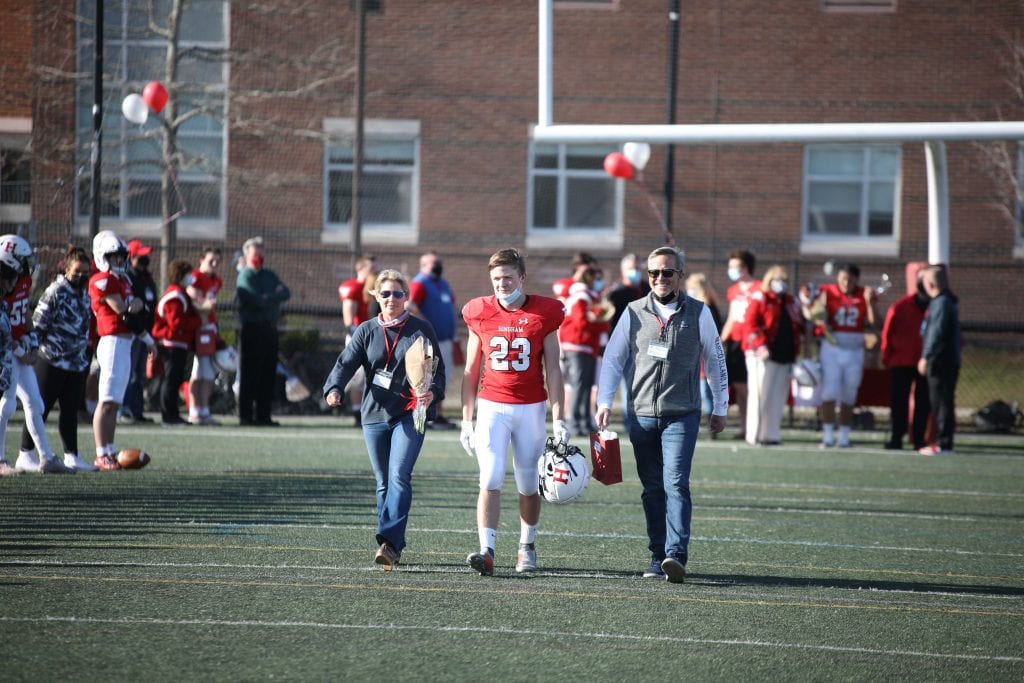 Will Dolan and his parents Tory and Will. 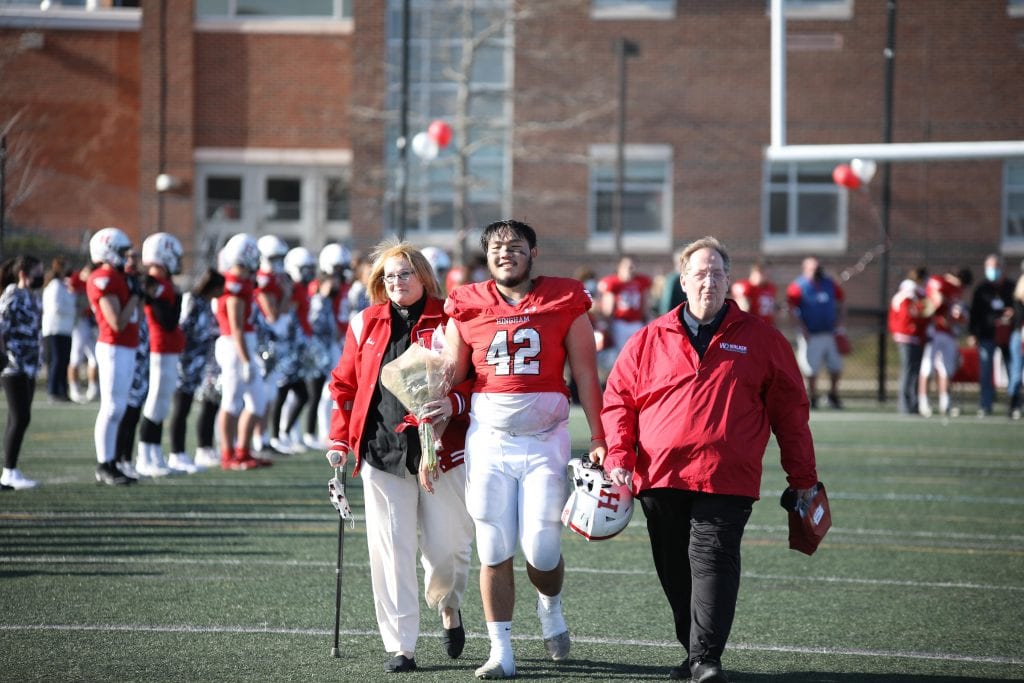 Liam Collins and his parents Judy and Rich. 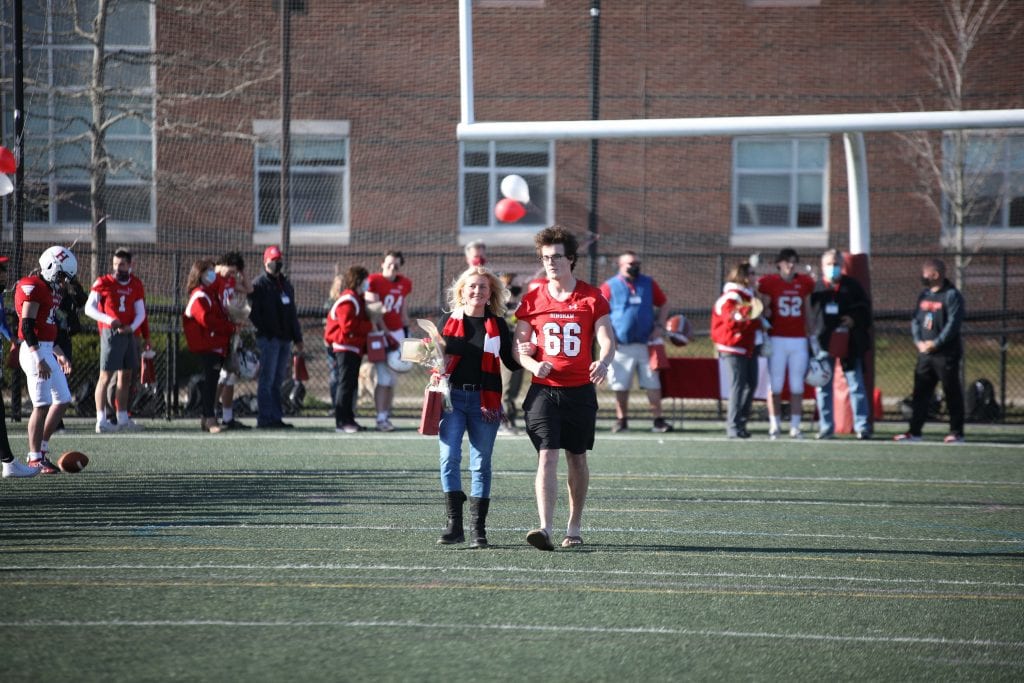 Reid Roberts and his mom Christina. 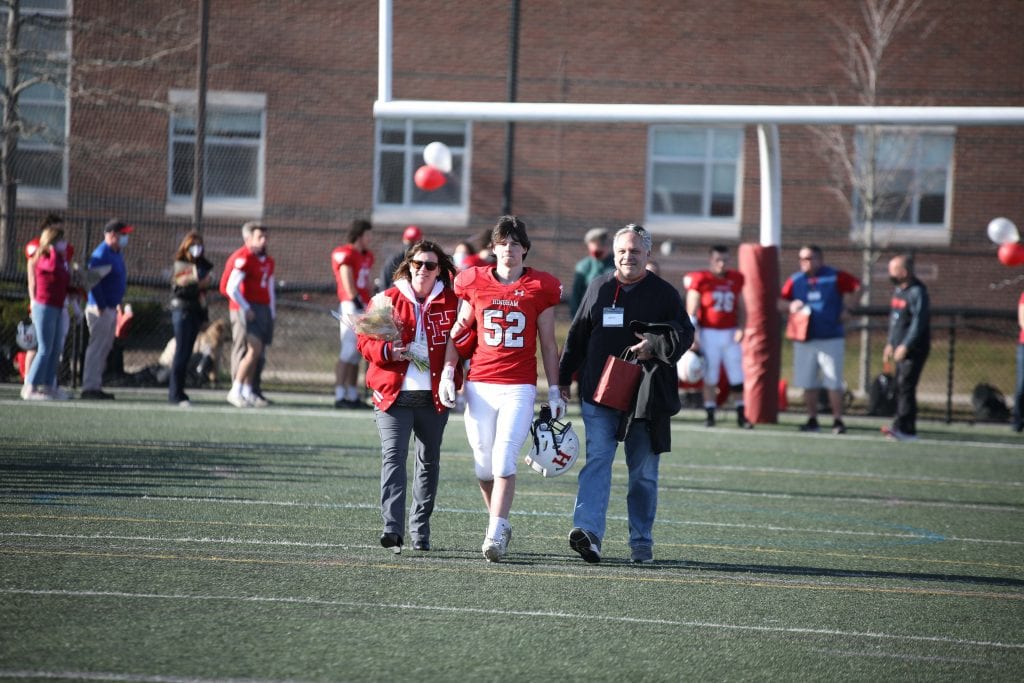 Ryan Devine and his parents Lynne and Mark. 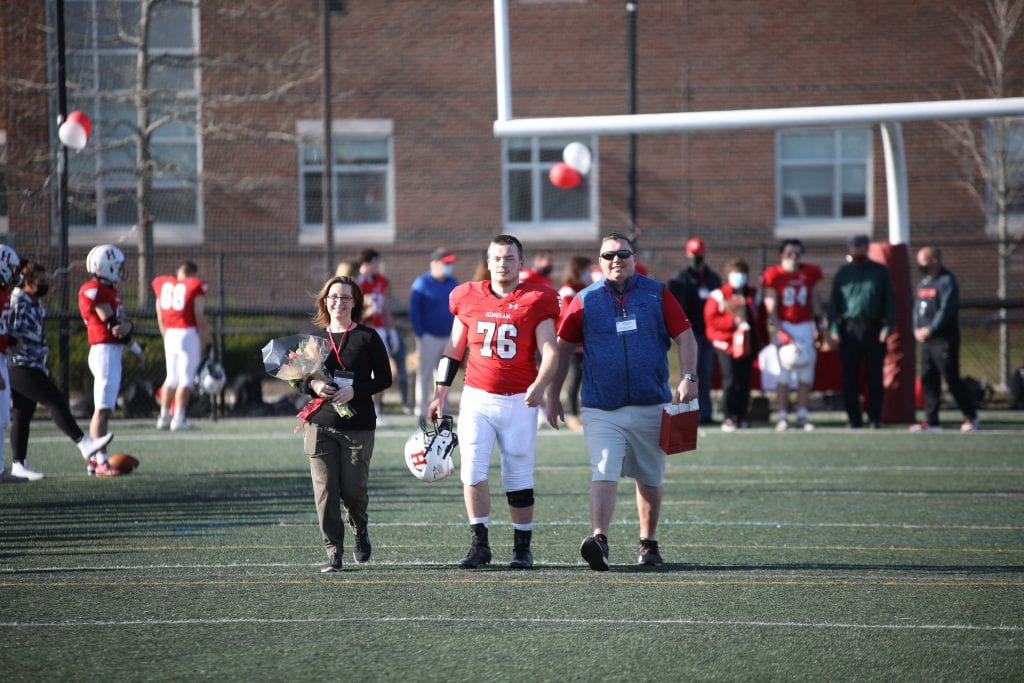 Aiden Conroy and his parents Corinne and Patrick. 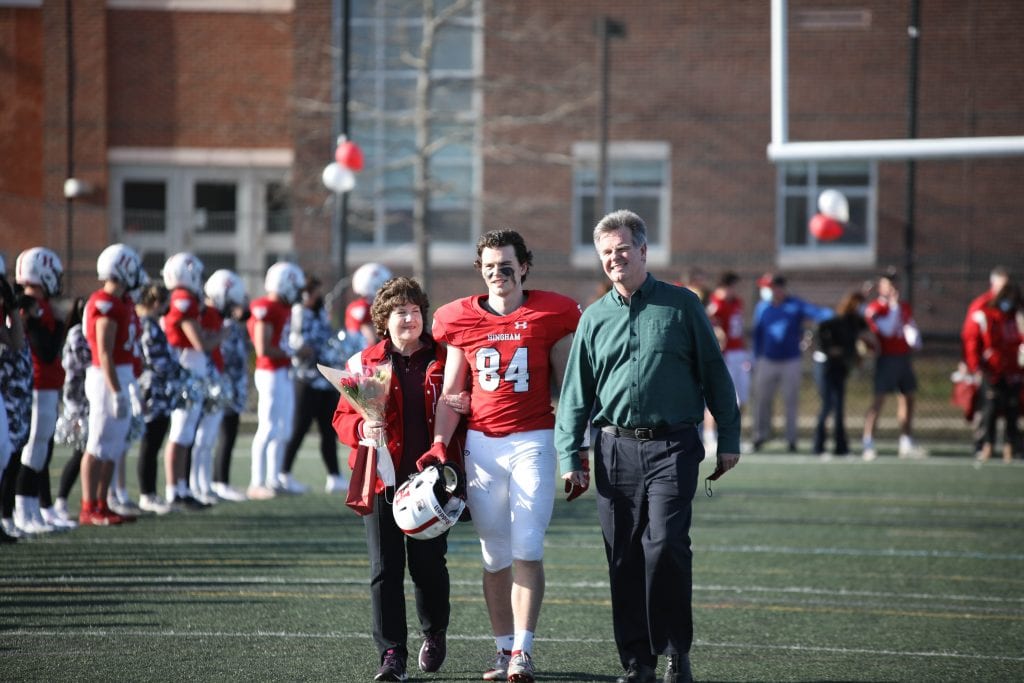 Matt Lahiff and his parents Maryellen and Dan. 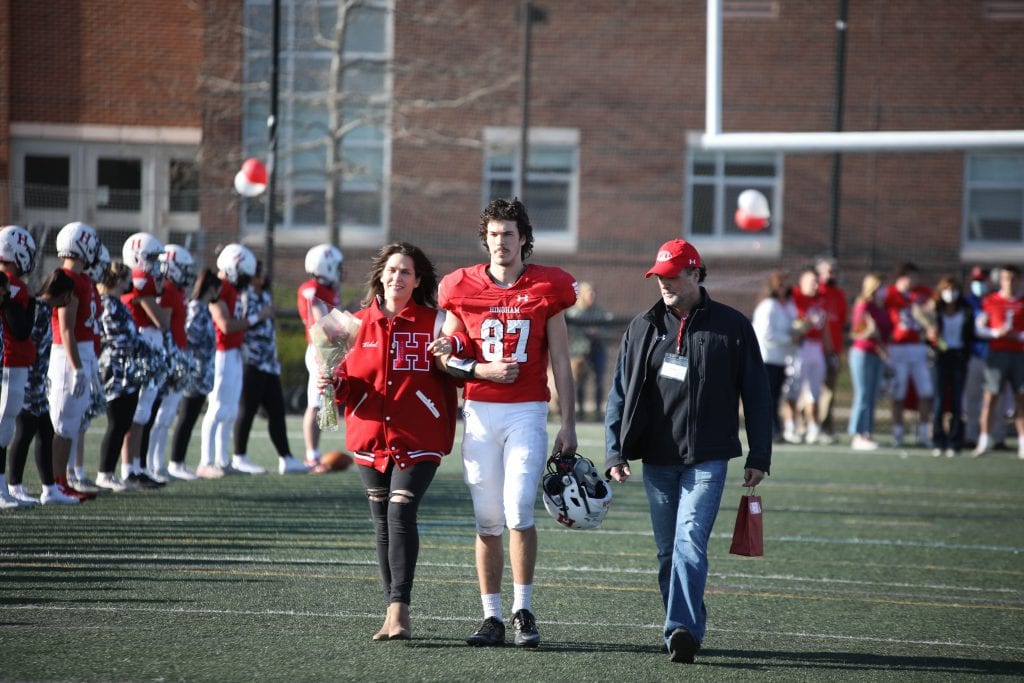 Cameron Vidal and his parents Maria and Rick. 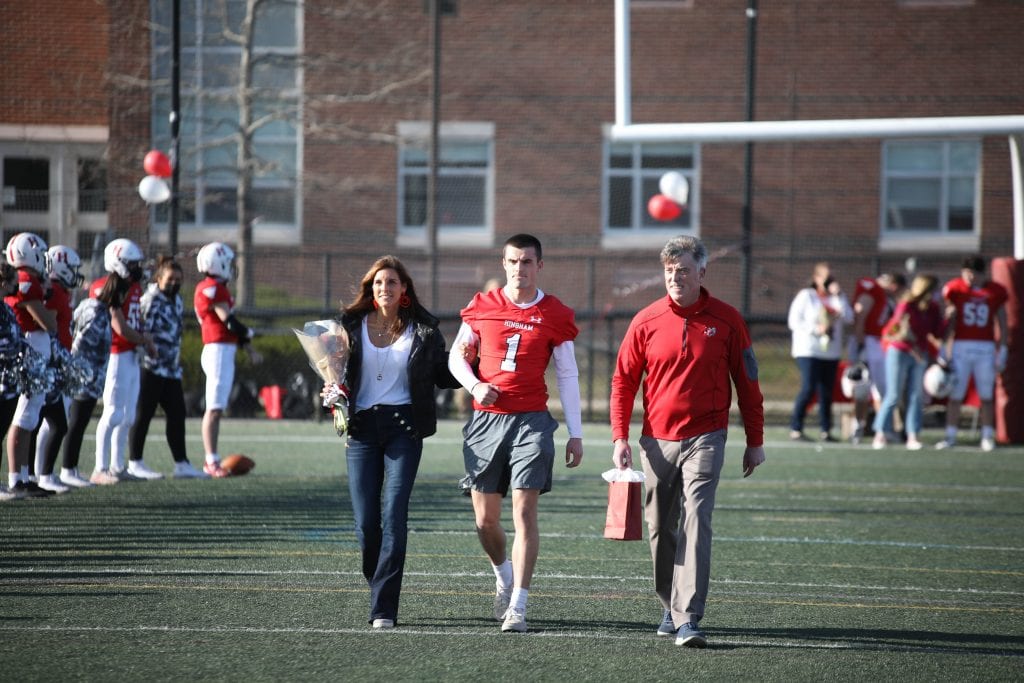 Captain Charlie Crean and his parents Amy and Bill. 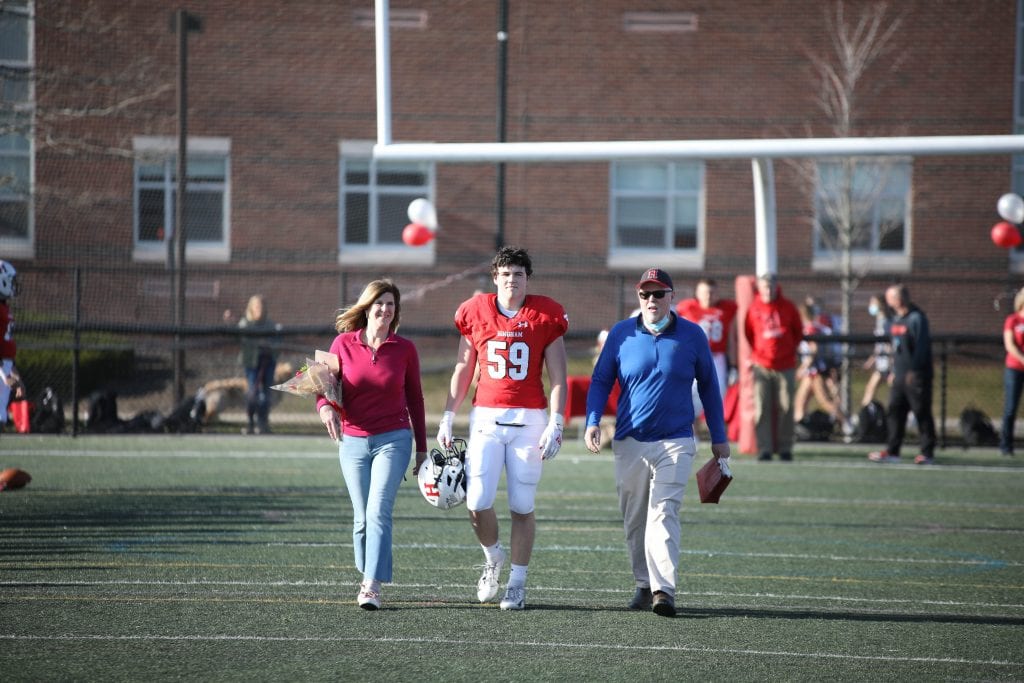 Captain John O'Connor and his parents Michele and Paul. 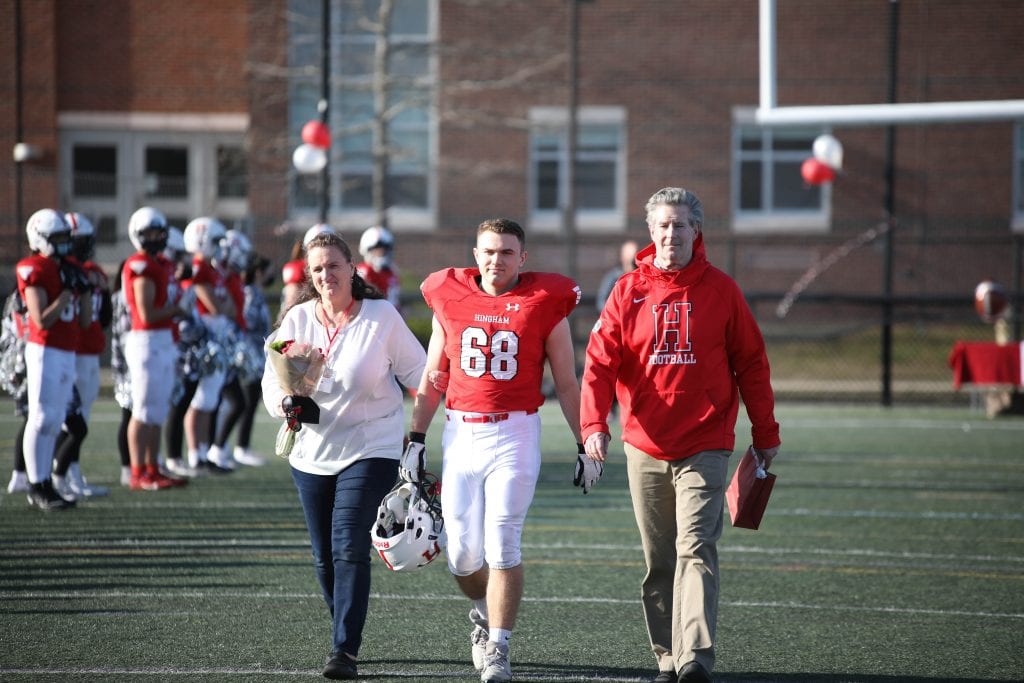 Captain Dan Hannon and his parents Kelley and Mike. 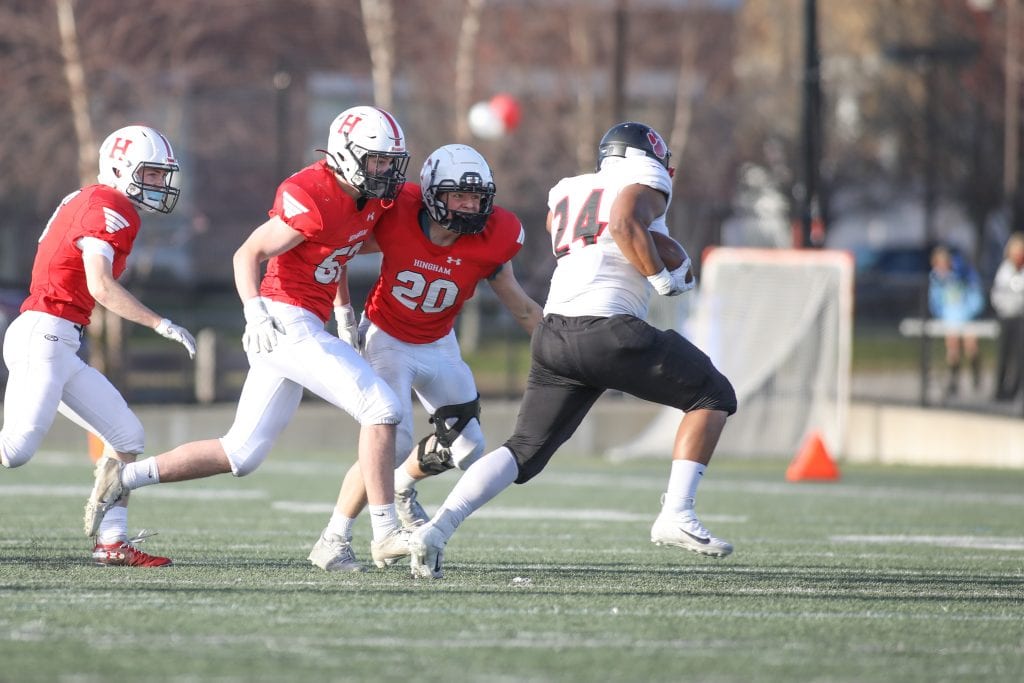 Seniors Ryan Devine and Grant Vanzura chase down the WH running back. 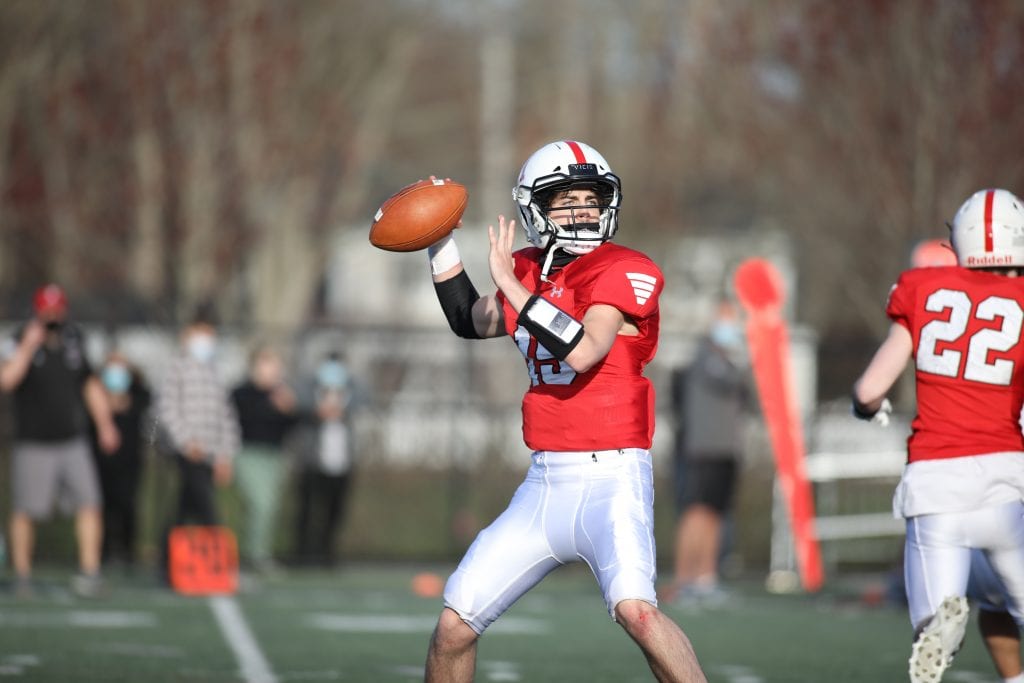 Junior Dylan Pierce sets up to throw in the first quarter. 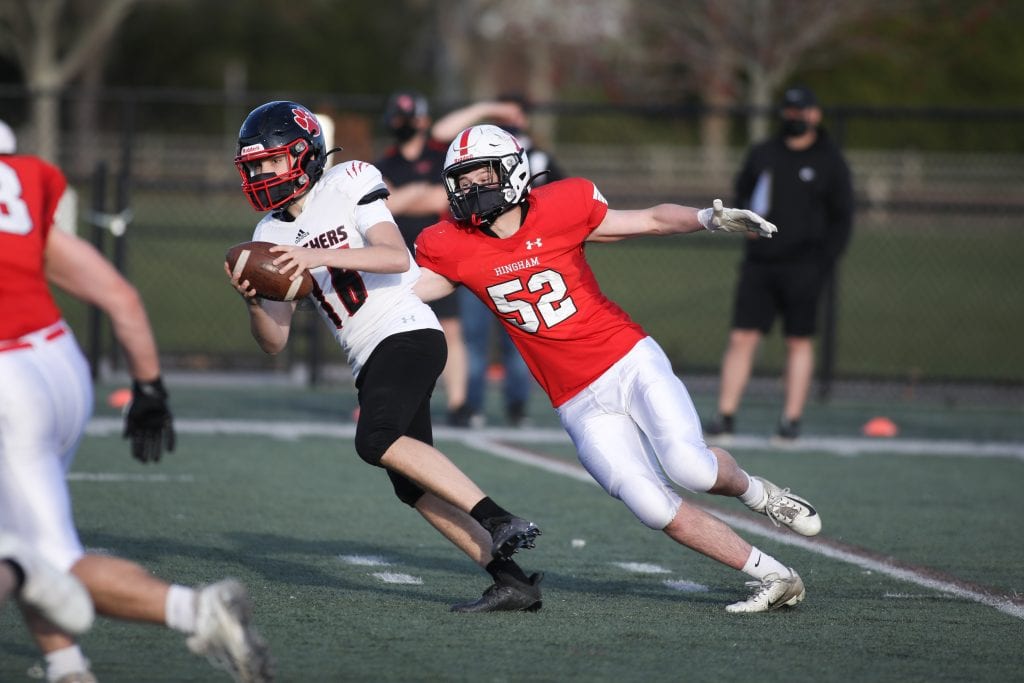 Senior Ryan Devine catches the QB from behind for the sack. 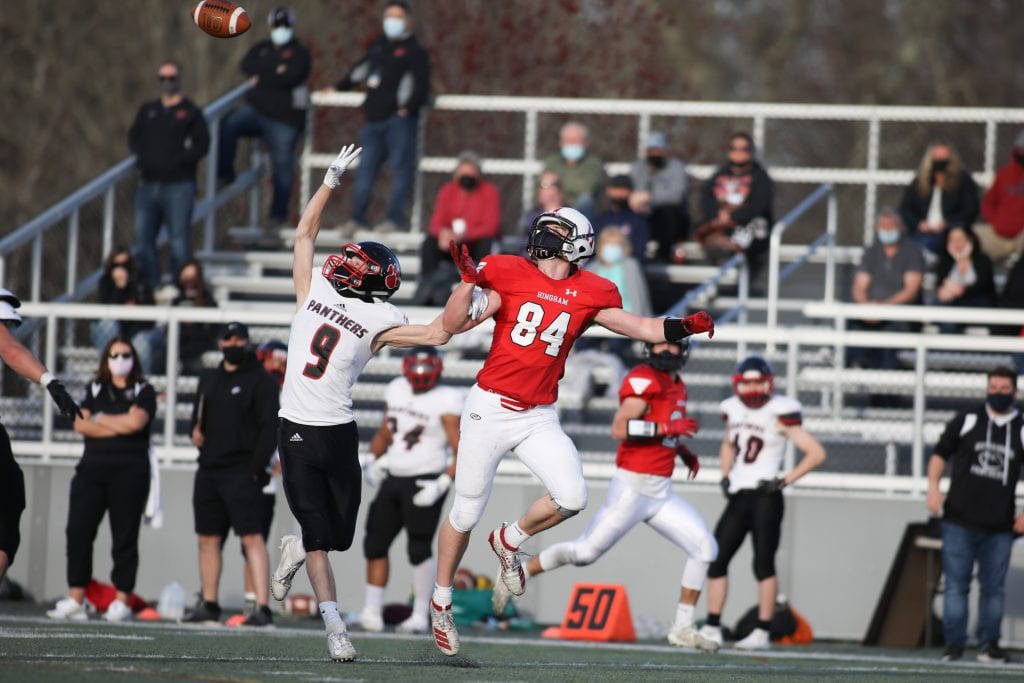 Senior Matt Lahiff gets his arm held trying to catch a deep ball. 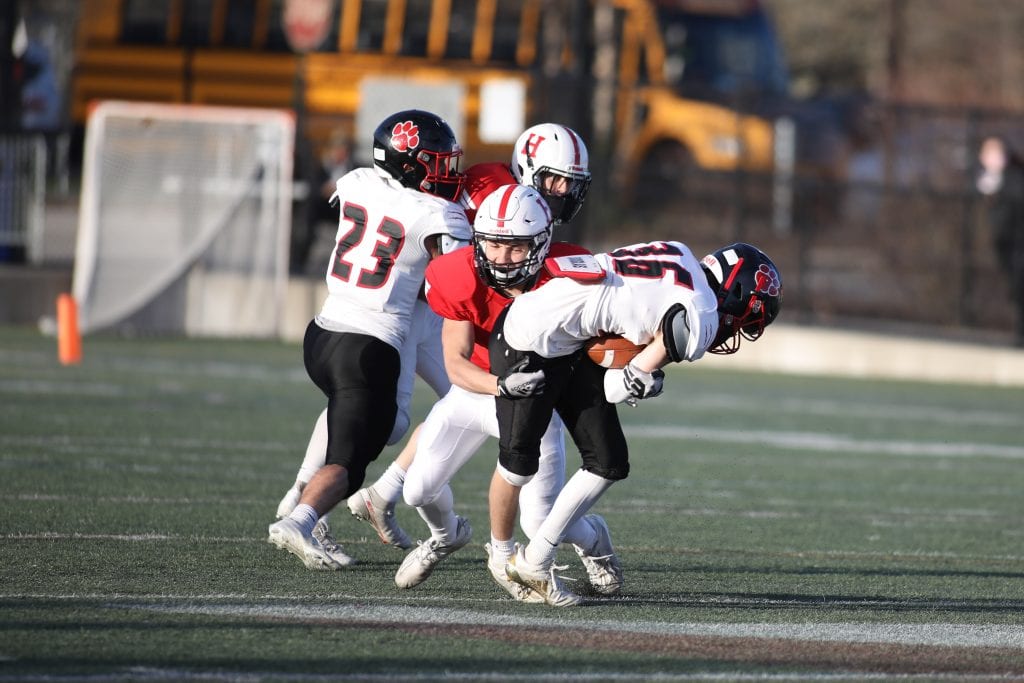 Sophomore Anthony Fabrizio wraps up the punt returner for no gain. 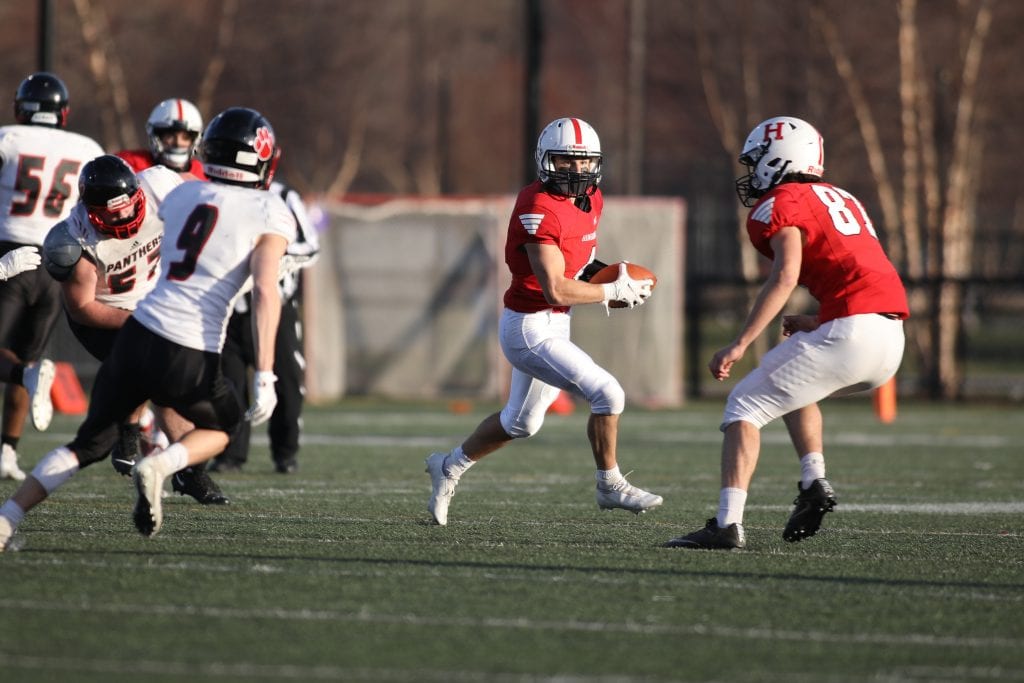 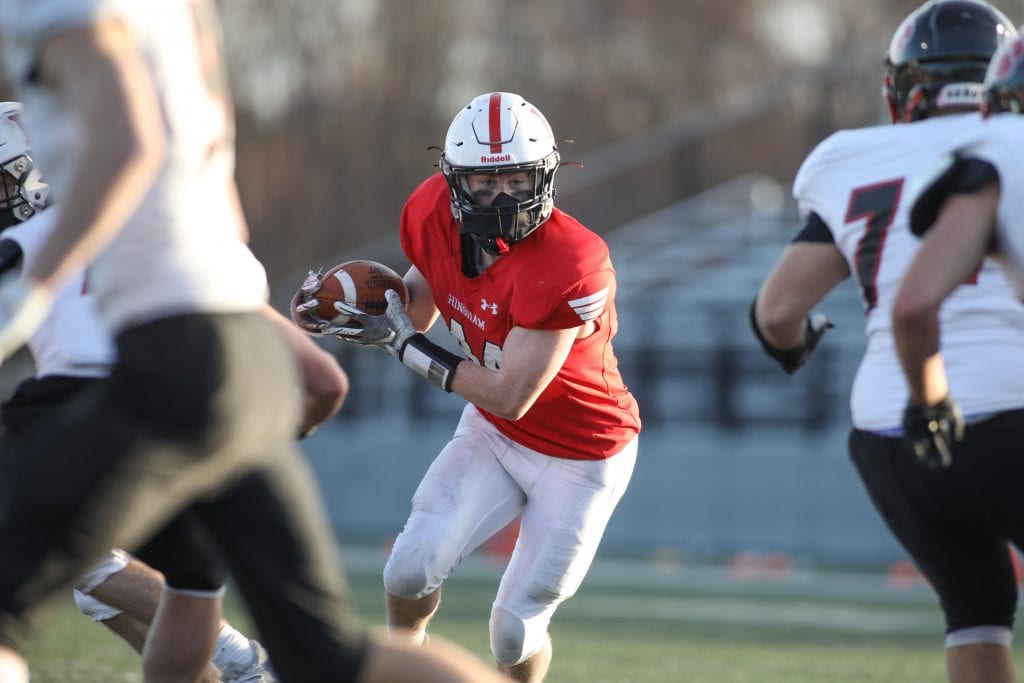 Junior Will Griffin takes the direct snap at the goal line but stopped just short. 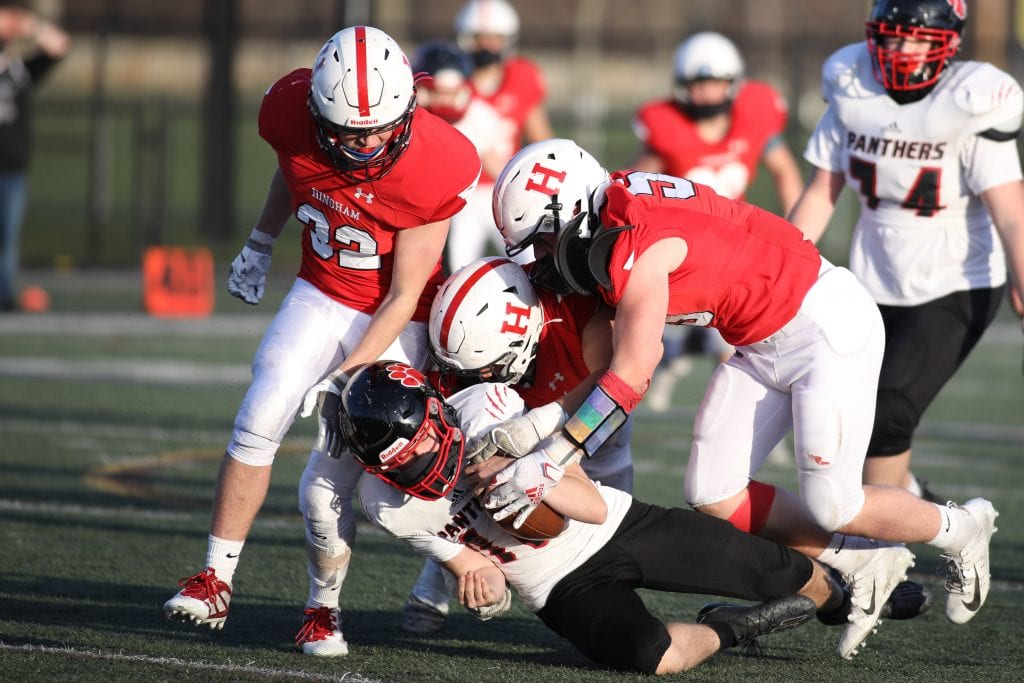 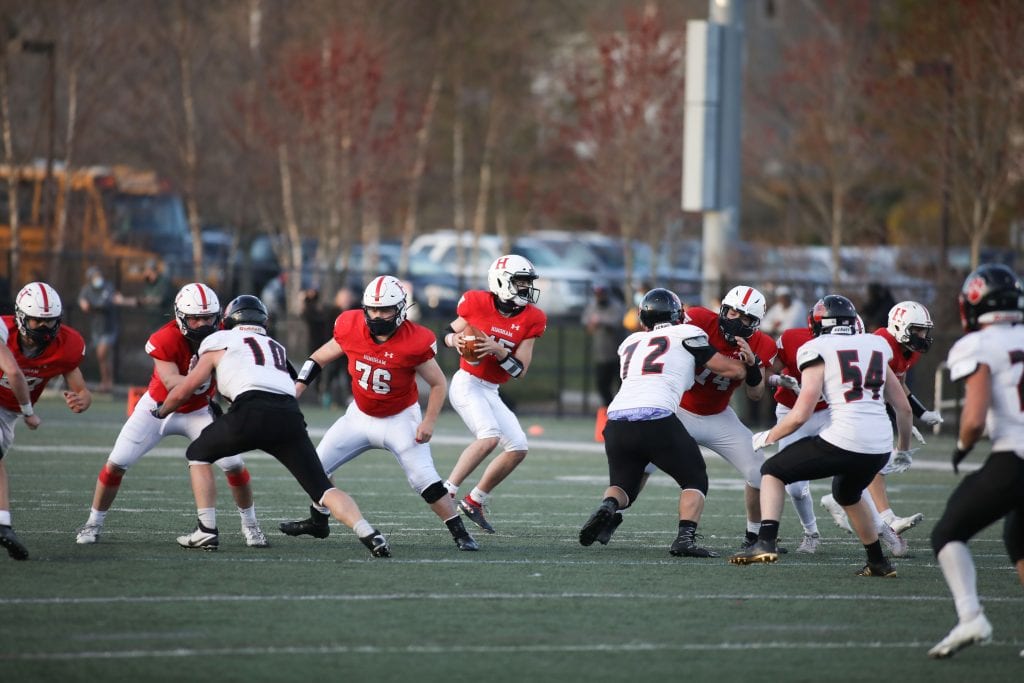 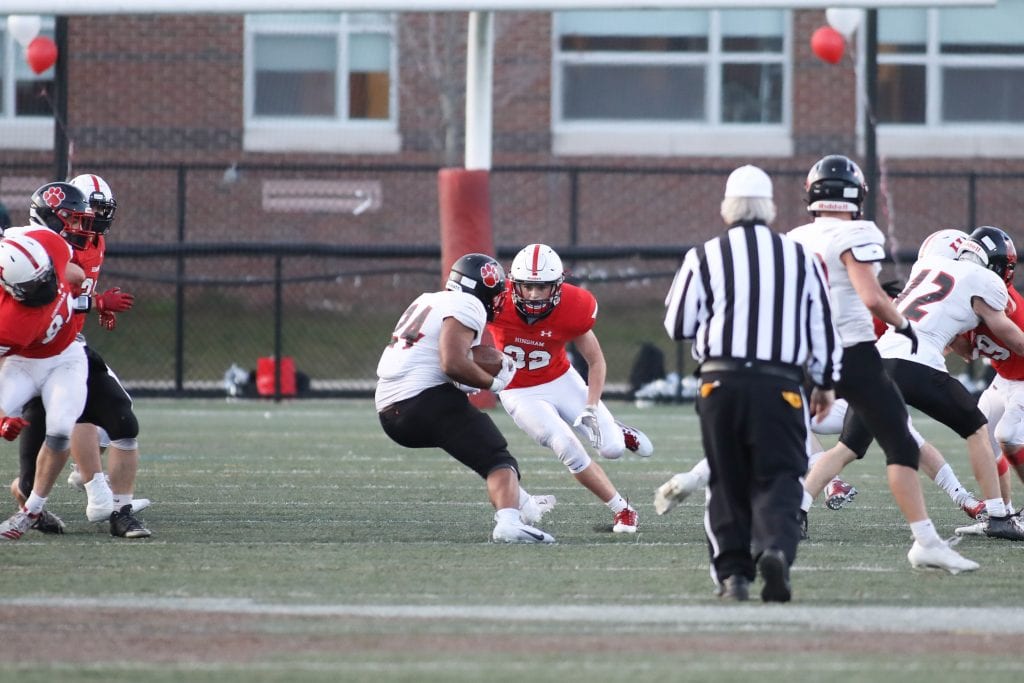 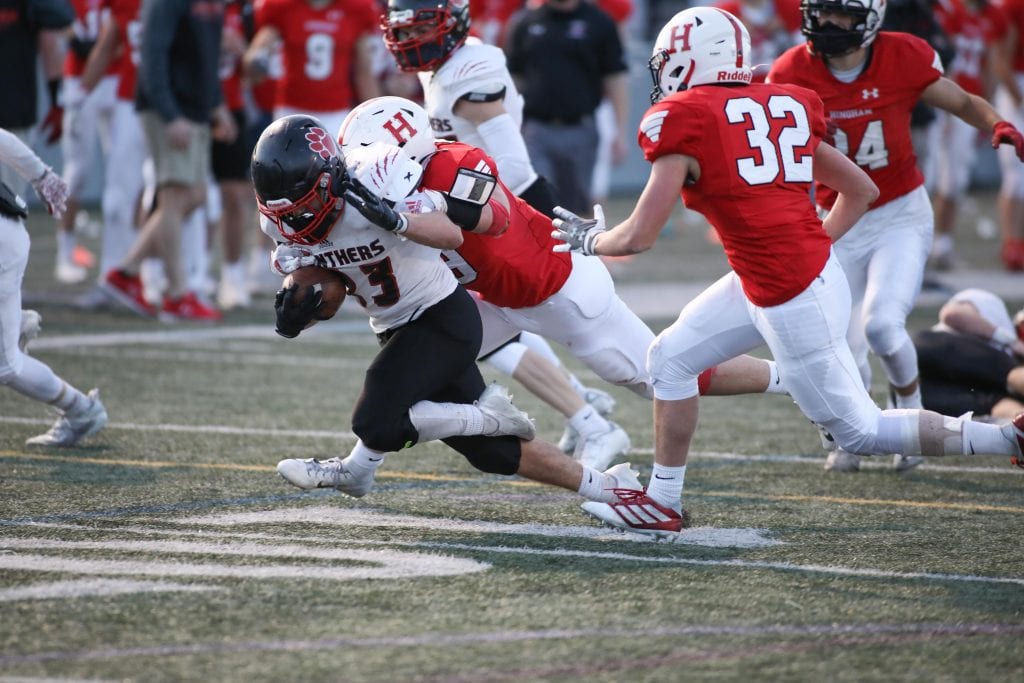 Senior captain John O'Connor takes down the WH running back short of the goal line. 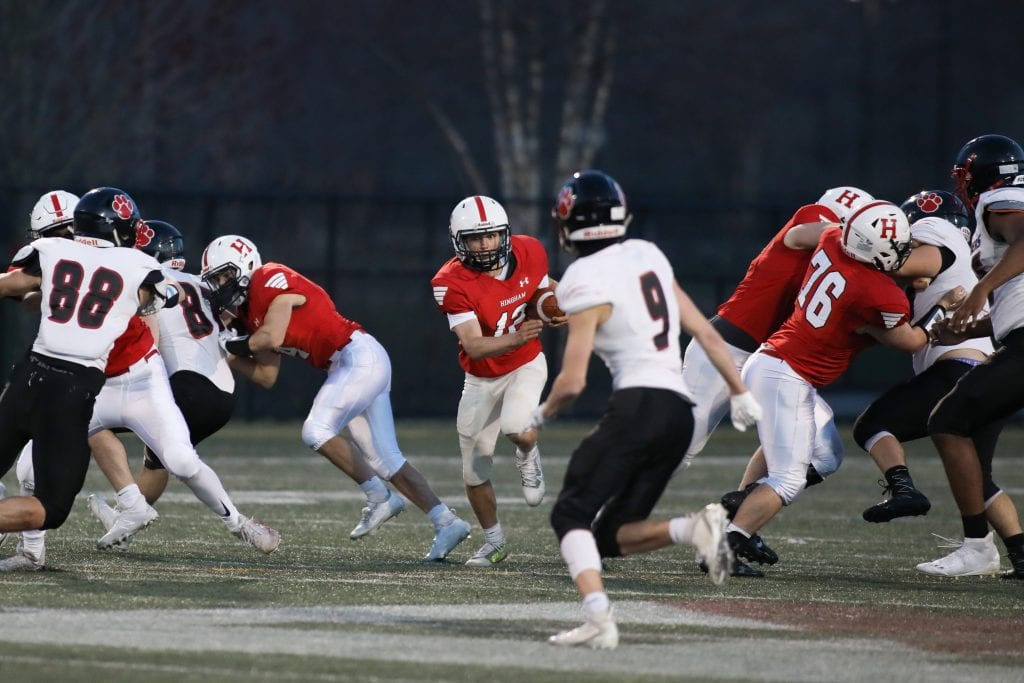 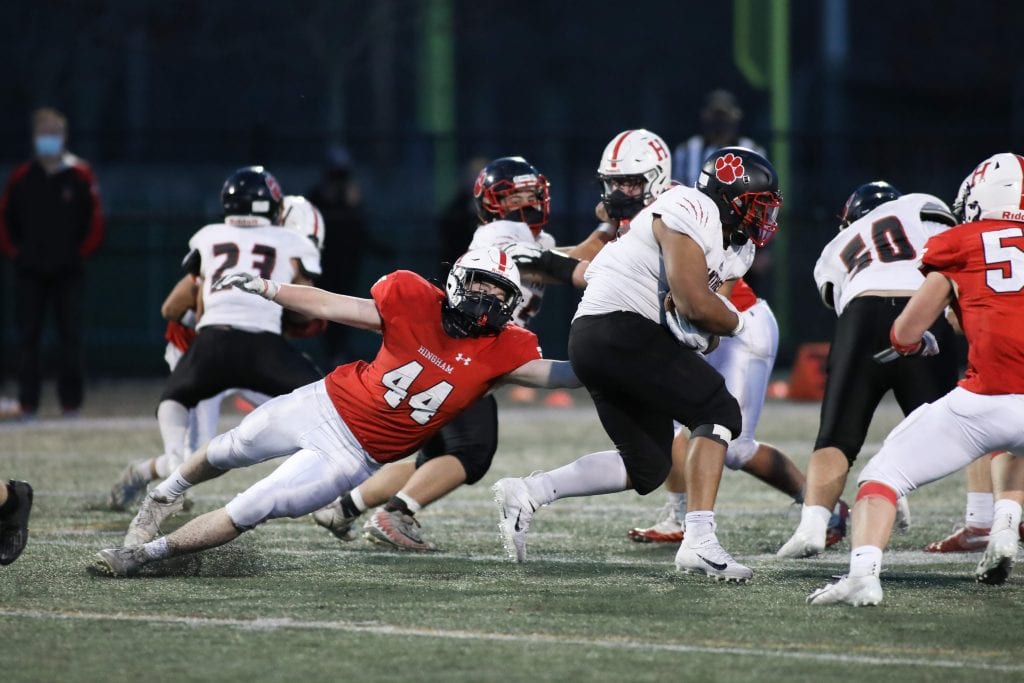 Junior Will Griffin slows down the running back just enough for his teammates to make the stop. 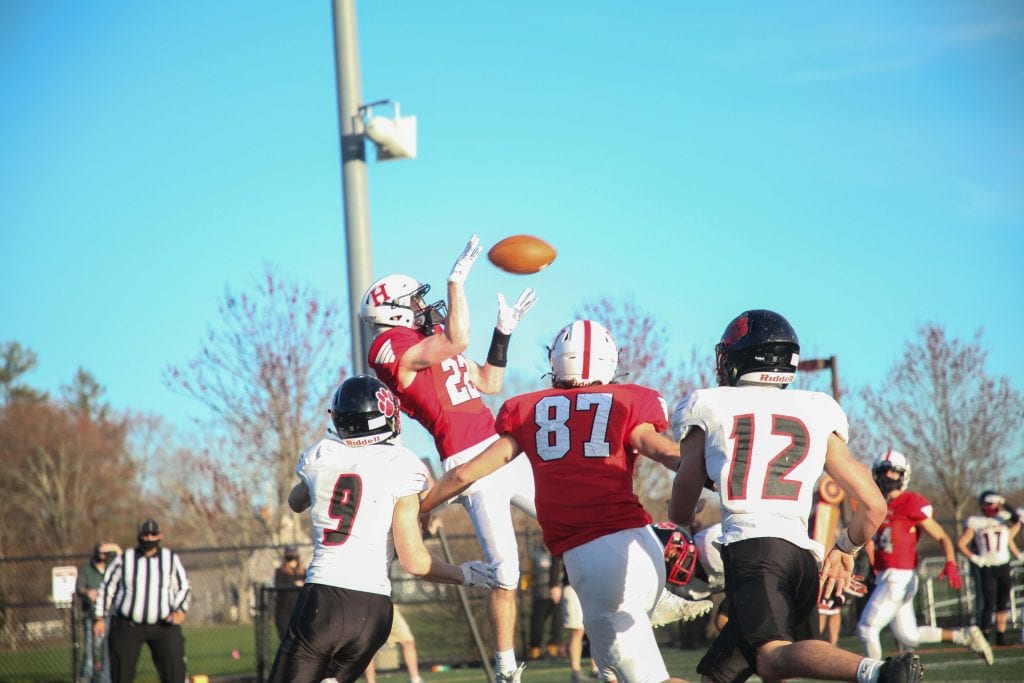 Senior Cooper Estes with the Harbomen's only touchdown of the day.