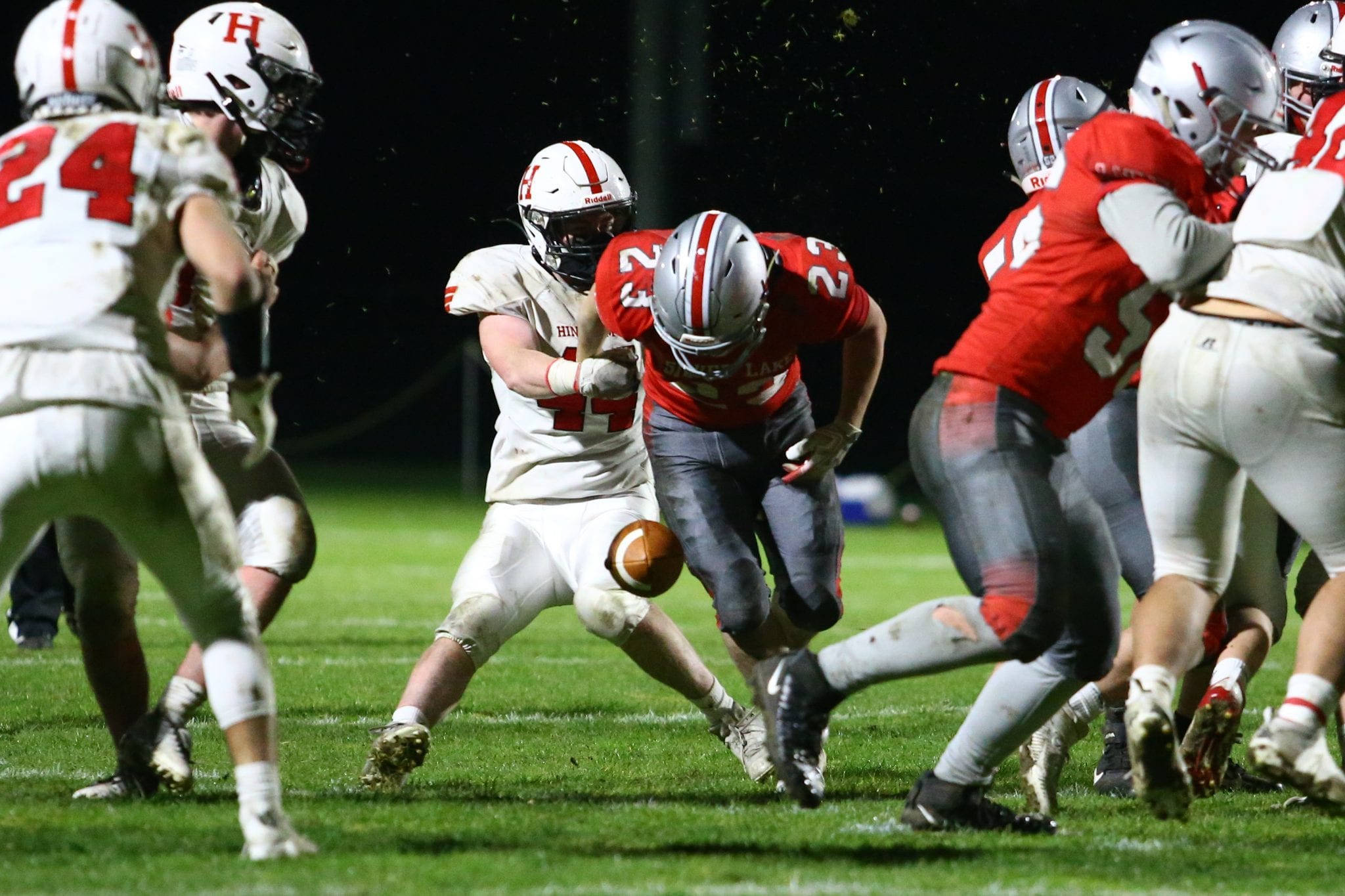 Junior Will Griffin rips the ball out causing a fumble in the second half.

Following a tough last-minute loss against Fitchburg, the Harbormen faced a short week before their next game. Hingham’s first away game was against Silver Lake, who had lost all three of their previous games before the matchup. Despite their record, the Lakers put up a fight against the Harbormen and made yet another game to remember.

Hingham started the game deep in their territory with the ball after a penalty on the return. Junior Cian Nicholas and senior Patrick Petrillo were prominent in the run game for the Harbormen, taking the ball up the middle and on jet sweeps. However, Silver Lake caught onto the run and junior quarterback Dylan Pierce had to make some pass plays. Big first downs from tight end Cameron Vidal and Petrillo kept the drive alive.

After some stuffed runs, the Harbormen offense found themselves in a 4th down situation deep in Silver Lake’s territory. Cooper Estes lined up in the slot and caught a 30-yard pass from Pierce in the back of the endzone. “It was a great way to gain momentum and take an early lead,” commented Estes after the game. Matthew Lahiff kicked the extra point, putting Hingham up 7-0 on the seven-minute first drive.

However, the Lakers responded with their own passing plays, with senior quarterback Ben Lofstrom finding tight end Thomas Ohlson. Hingham’s defense held the Silver Lake offense at their 40-yard line, forcing the Lakers to go for it on 4th down. A sack by senior Ryan Devine forced the turnover on downs, giving the ball back to Hingham.

Hingham once again had very little success with their run game. A long jet sweep by Estes got the drive going for the Harbormen but the Lakers were quick to shut down anything else. The lack of a strong, varied offense kept Hingham without a score until the third quarter.

Silver Lake put up a strong second quarter that took the lead back from the Harbormen. A 31-yard jet sweep by Gio Henrickson tied the game two minutes into the quarter. On the first play after a Hingham punt, Lofstrom found senior Sam Shirikjian for an 86-yard touchdown pass. In 90 seconds, the Silver Lake offense completely changed the game.

The two offenses were quiet until 8 minutes into the third quarter, after the Hingham defense forced Silver Lake to turn the ball over on downs. Pierce and Estes connected on a pass that set Hingham up on the Silver Lake 22-yard line. A jet sweep to Petrillo put the Harbormen just outside the 10-yard line. Pierce found Vidal for a dump pass over the middle and the tight end walked in to tie the game. Hingham’s extra kick was good, retaking the lead from the Lakers.

With just two minutes to play, Silver Lake got the ball back on their own 20-yard line. The Lakers proceeded to string some running and passing plays that put them in prime scoring position. A sideline pass to Ohlstrom and a quarterback draw from Lofstrom made up a strong drive from the Lakers. Hingham’s defense found themselves backed up to the 5-yard line with just 40 seconds left in the game.

Just a field goal would seal the game for the Lakers. The offense tried two run plays to no avail, and Silver Lake’s special teams unit took the field with time stopped at two seconds. Hingham set up offsides but the kick was good, and Silver Lake streamed onto the field to celebrate the late victory. However, because offsides is a dead-ball penalty, the kick had to be retaken and the two seconds added back onto the clock. This time, Hingham broke apart the offensive line, with Anthony Fabrizio and Grant Vanzura converging on the kick. Pierce showed great admiration for his teammates, “we have plenty of talented players on the defensive side of the ball as well as talented young players who played [a] big role in the win.” The blocked kick won Hingham the game, 14-13.

Hingham faces off against Whitman-Hanson next Friday at 5:30. “Next week we are definitely going to need to block better and tackle better as well,” mentioned Estes about the upcoming matchup. “We have the players and the skill to be an amazing team we just need to continue to execute.” Pierce shared much of Estes’ sentiment, noting that, “the plan is to clean things up offensively and defensively and try to not make crucial mistakes that have put us into positions to play in closely contested ball games.”

A special thanks to Steve Gilbert for providing game photos.  The gallery of this game can be found on his website here.