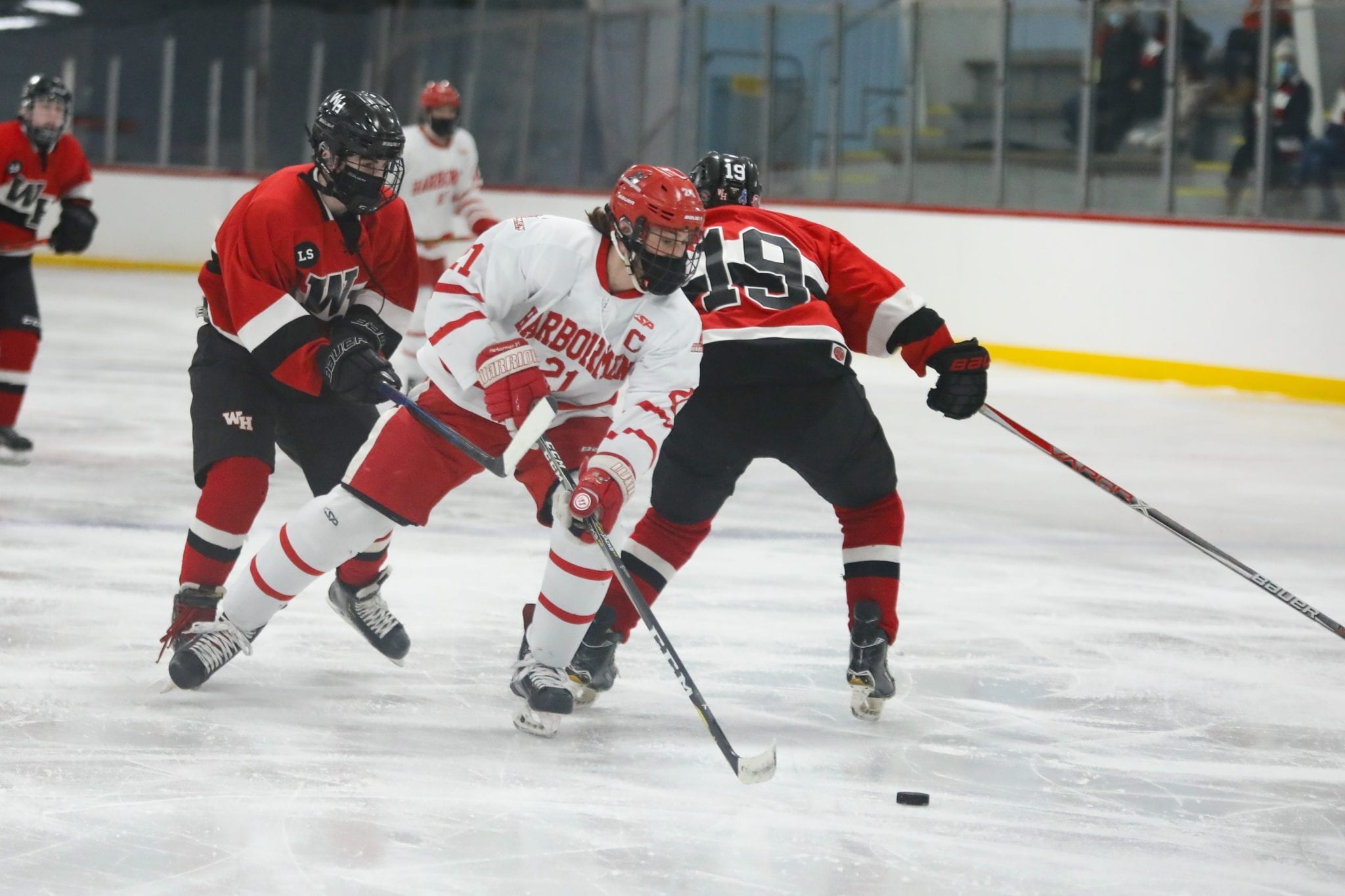 Senior captain Paul Forbes continues to show his leaderhship on the ice with his play. Scoring less than a minute into the WH game set the tone for the next two games.

It was a busy 24 hours for the Harbormen earlier this week.  On Wednesday night, their 8 seniors were honored before their game with Whitman-Hanson.  20 hours later, they were back on the ice to take on their rivals from Duxbury.  The boys skated away with 2 wins to remain undefeated on the year at 10-0.  They are currently ranked third in the latest hockey polls.

Thursday’s game was a rematch from last week where Hingham won 6-1 down in Kingston.  Both teams were coming off games from the night before, but that didn’t dampen the intensity of play.  Sophomore Aidan Brazel opened up the scoring just 2 minutes into the game with his 6th goal of the season.  Duxbury tied it up at 1 on a power play goal half way through the period.  Senior captain Paul Forbes gave the Harbormen the lead again just three minutes later on a power play goal of his own.  This extended his goal scoring streak to three games.  With two minutes left in the period, senior Evan Corbett, who has been on a goal scoring tear of late, scored to extend Hingham’s lead to 3-1.

In the second period, the ice was tilted to Duxbury’s favor and was more physical and the Dragons took advantage of their opportunities.  They scored twice in the period, including the game tying goal with under a minute to play.  The Harbormen seemed to struggle to find their game in the second according to Corbett.

It didn’t take long for the message to set in as Corbett scored his second goal of the game, and his team leading 8th goal of the season, on the first shift of the period giving his team a 1 goal lead again.  That was all the Harbormen need to get back to playing their style of hockey - moving the puck, defending in their zone, and everyone capitalizing on opportunities presented to them.  With nine minutes left, junior Ryan Burns did just that - the former defensemen turned forward stole the puck in the Duxbury zone, skated past two defenders and buried his first career goal giving Hingham the insurance goal.  Burns is part of a rotating 4th line that’s had a noticeable impact on games this year.

“(Burns’ goal) really helped us get the momentum back,” Corbett went on to say. “I think the 4th line has contributed a lot lately.  They’ve been getting the energy back up when we’ve lost momentum.  They just play well, do their jobs and keep everybody else in check. We can play with four lines and most teams can’t.”

In the end, the 5-3 score held up and Hingham managed to keep the current longest winning streak in D1 hockey in tact.  It was also the second game this season that parents were allowed to watch a game at their home rink.  The night before, for senior night, was the first.

That game was a little less suspenseful has Hingham beat Whitman-Hanson 5-2.  The score is a little deceiving as the Harbormen were up 2-0 in the first few minutes and WH scored 2 goals late as they were on a power play for the remaining 5 minutes of the game.  The players were glad to finally have fans in the stands, especially during senior night.

“It was awesome,” Forbes said when asked about playing in front of a crowd.  “Usually this place is packed with fans from all over Hingham.  Today was special with our parents and family here to cheer us on, since we’ve been playing in front of an empty rink at home this year.”

“This year was definitely different.  Senior night is usually one of the biggest games of the year and the rink is fulled to capacity,” he went on to say.  “Today it was just our parents, but it was great to have senior night with the kids I’ve been playing hockey with my whole life.  It’s a great group of guys this year.”

Corbett also agreed that while it was different, it was great to have family there watching a game.

“It’s been an incredible year.  Obviously most of us wanted to have all our friends from school there, but we couldn’t do that.  But it was nice to have our family there supporting us and just have somewhat of a normal senior night, taking pictures with all the seniors and parents.  It was a good feeling.” 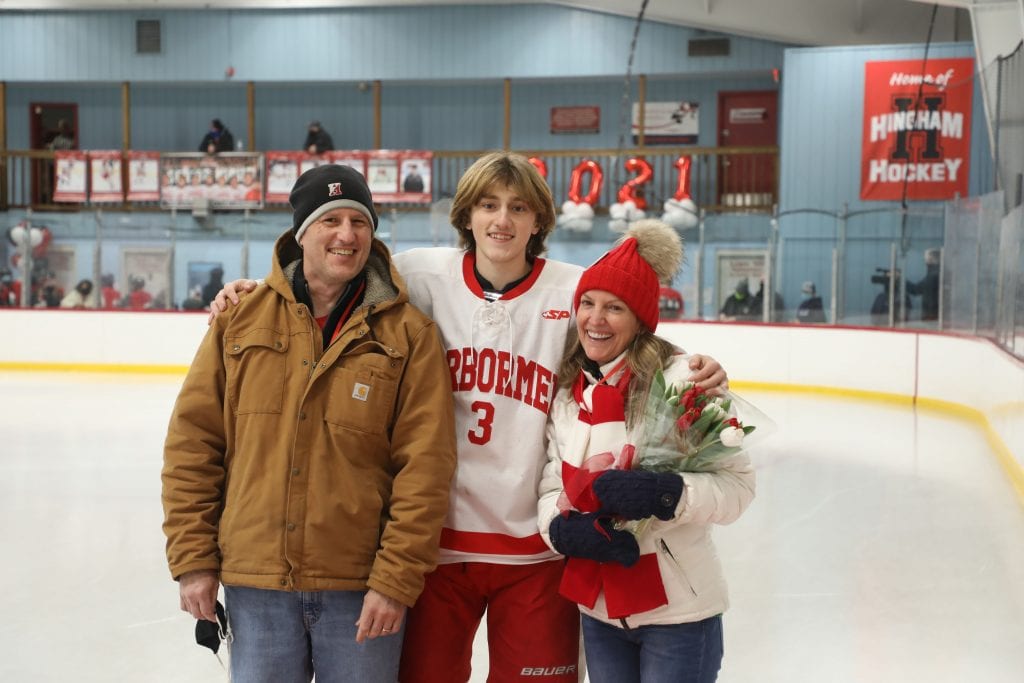 Lars Osterberg with his parents Shelly and Eric on senior night. 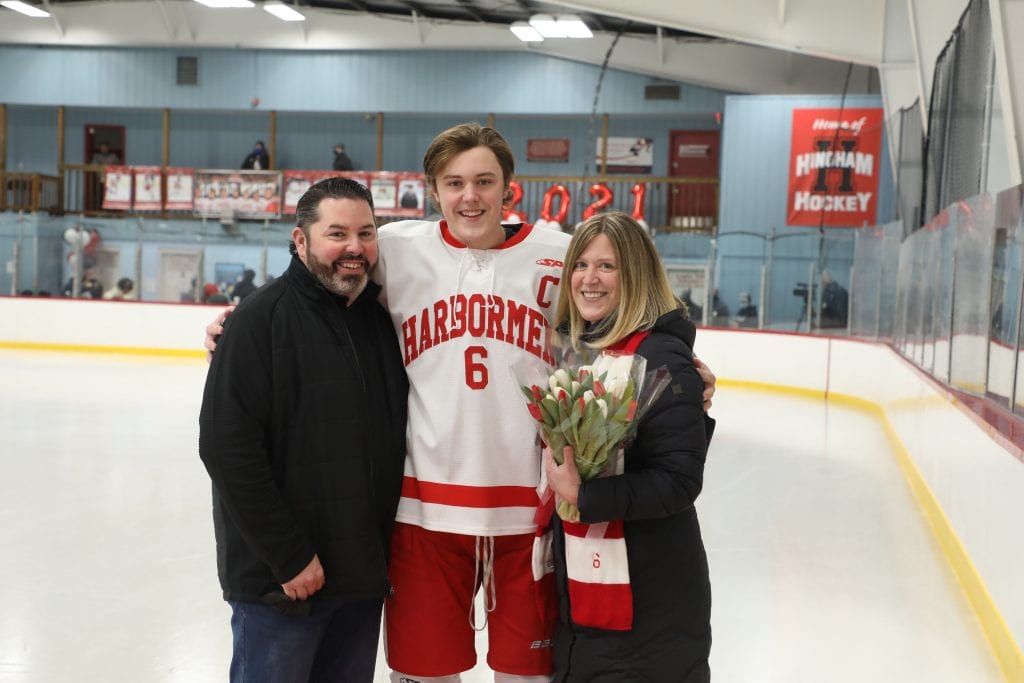 Captain Ronan Mulkerrin with his parents Andrea and Kevin on senior night. 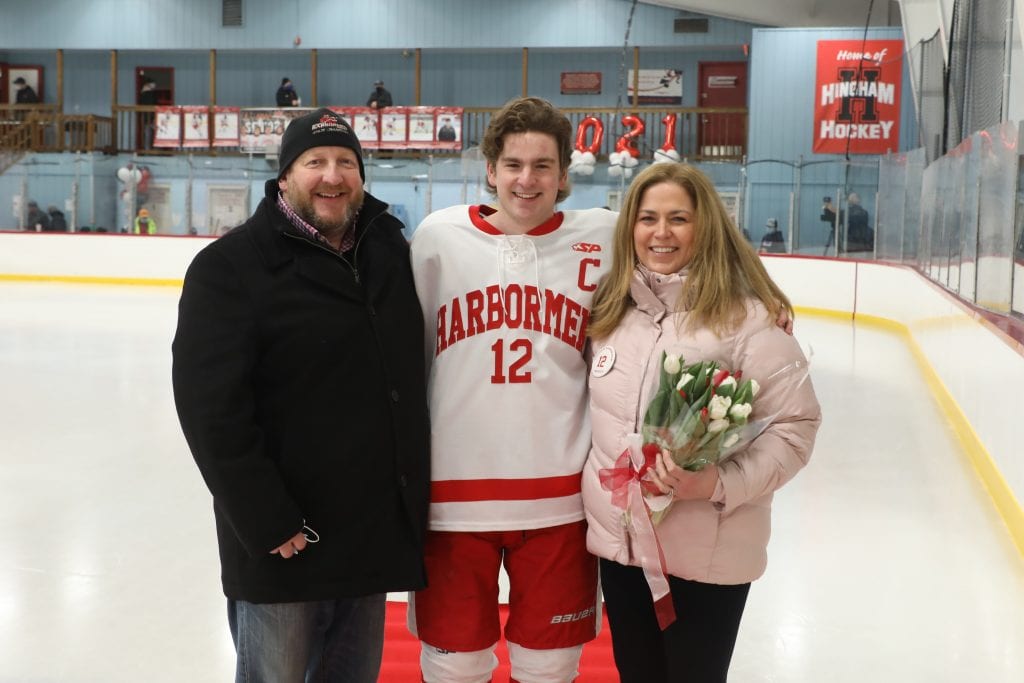 Captain Tommy McNally with his parents Jen and Kevin on senior night. 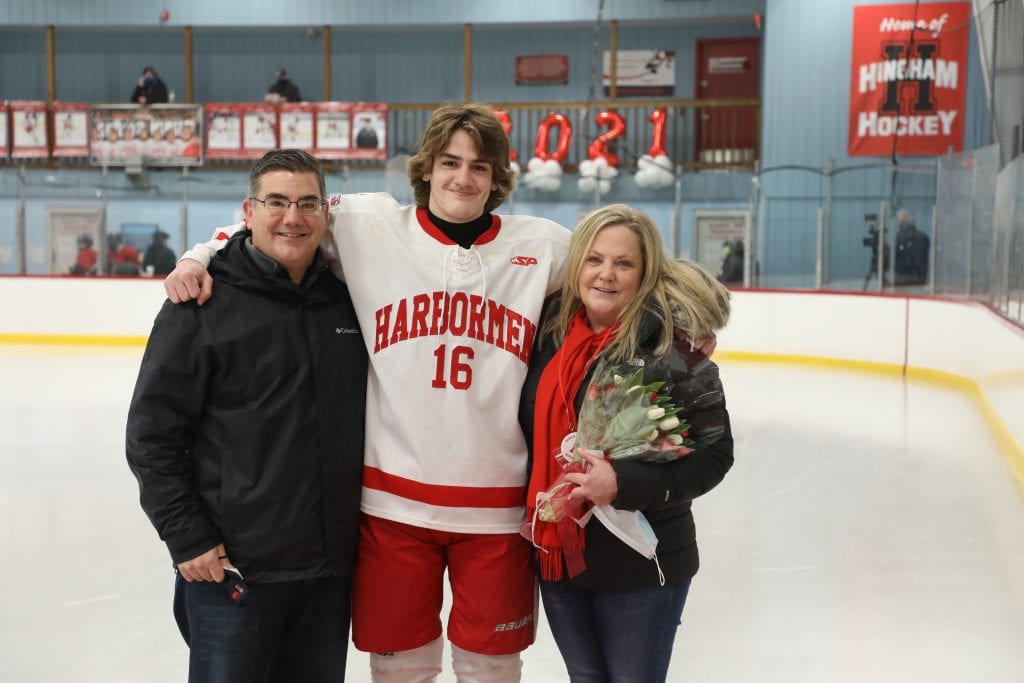 Evan Corbett with his parents Carol and Paul on senior night. 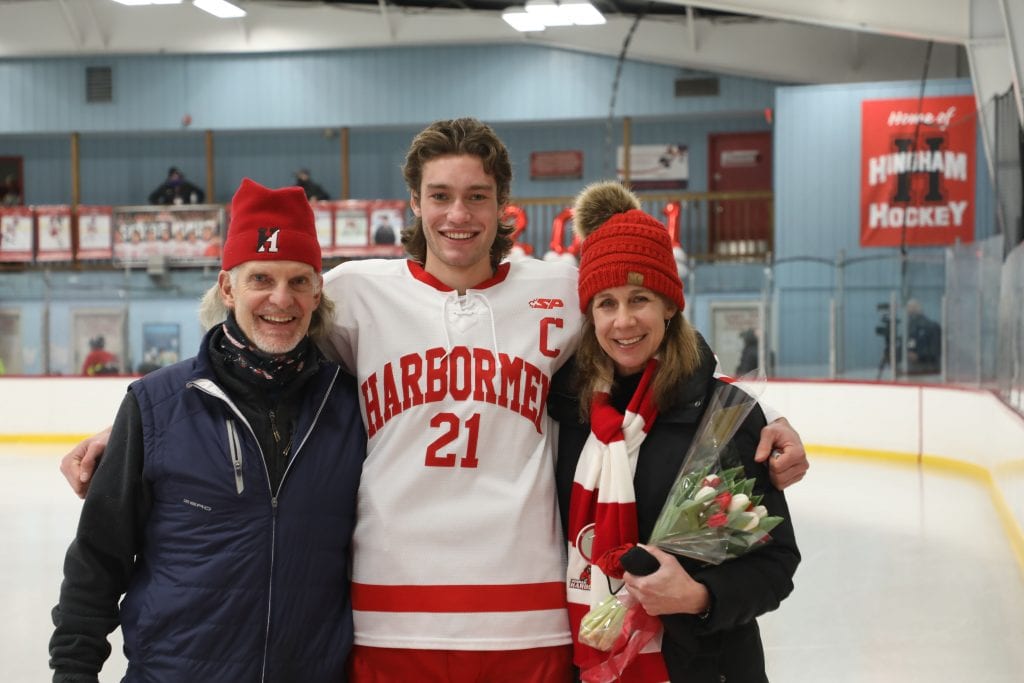 Captain Paul Forbes with his parents Katherine and Frank on senior night. 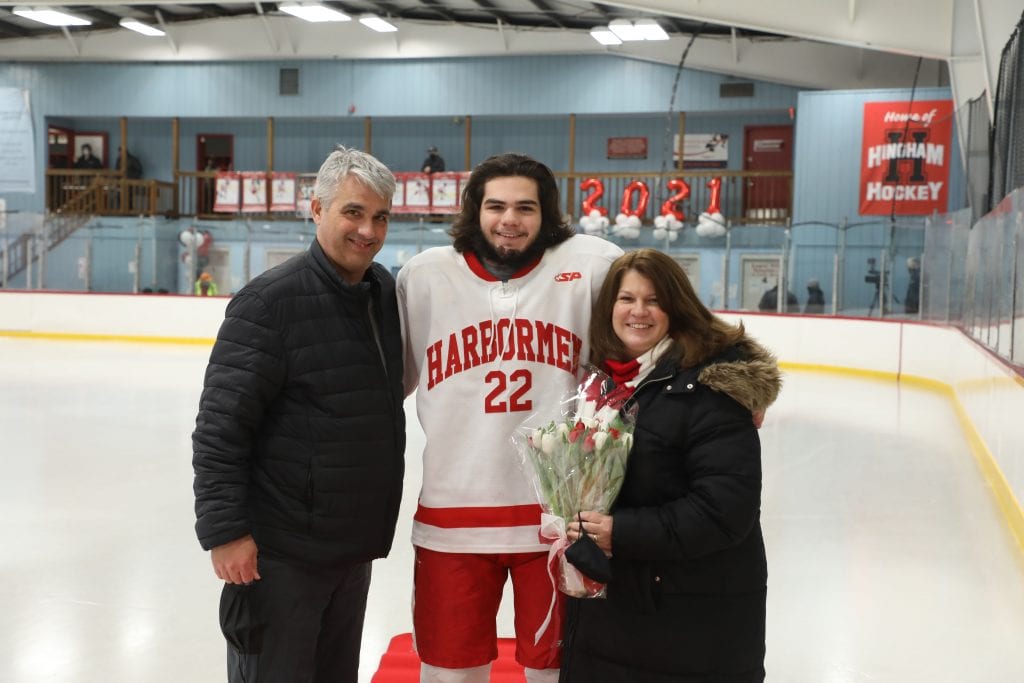 Jack Magner with his parents Michelle and John on senior night. 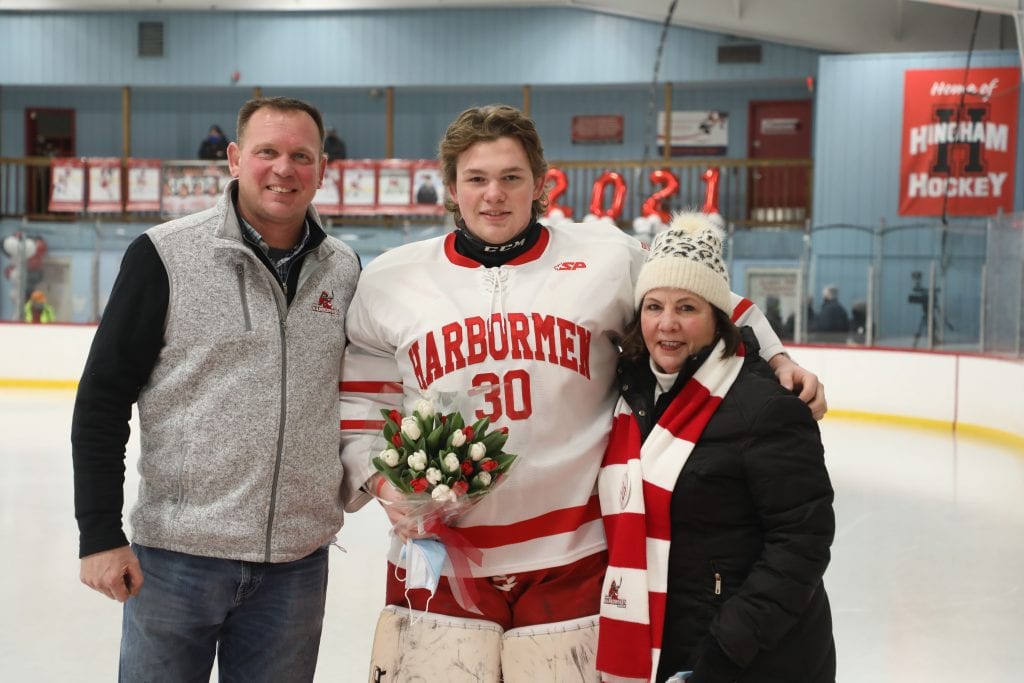 Theo Jacobs with his parents Terio and Jake on senior night. 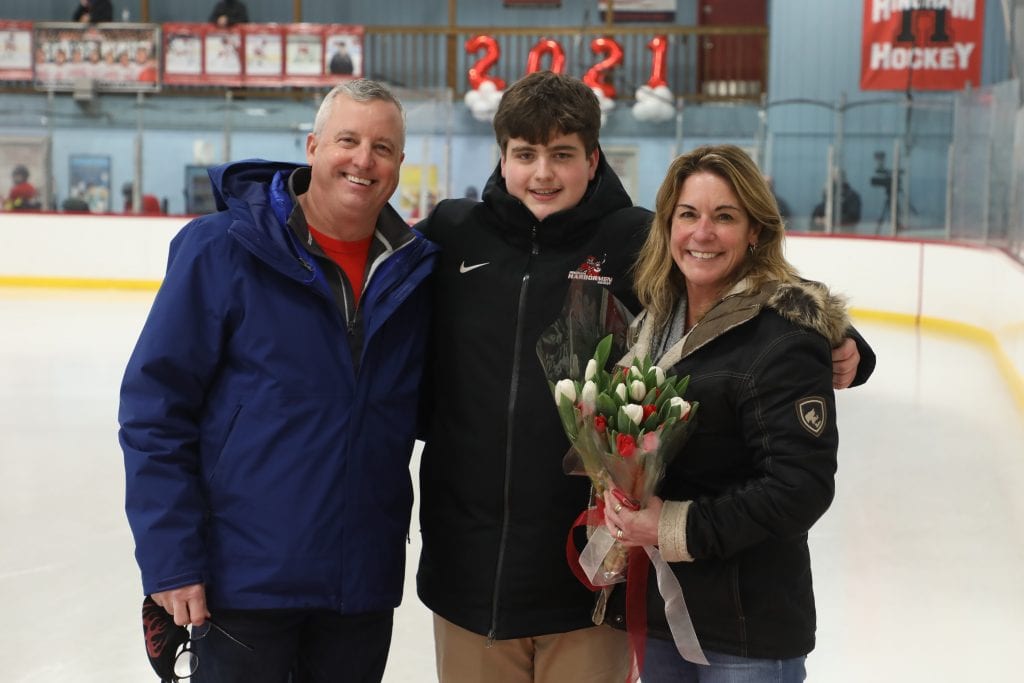 Team manager Will Shadrick with his parents Jen and Matt on senior night. 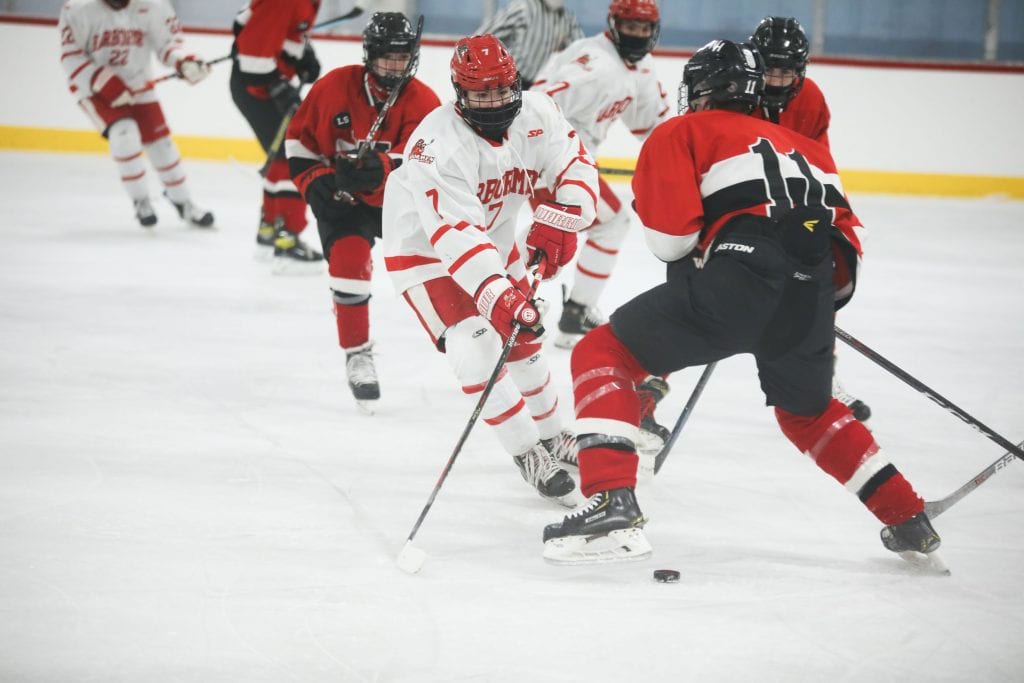 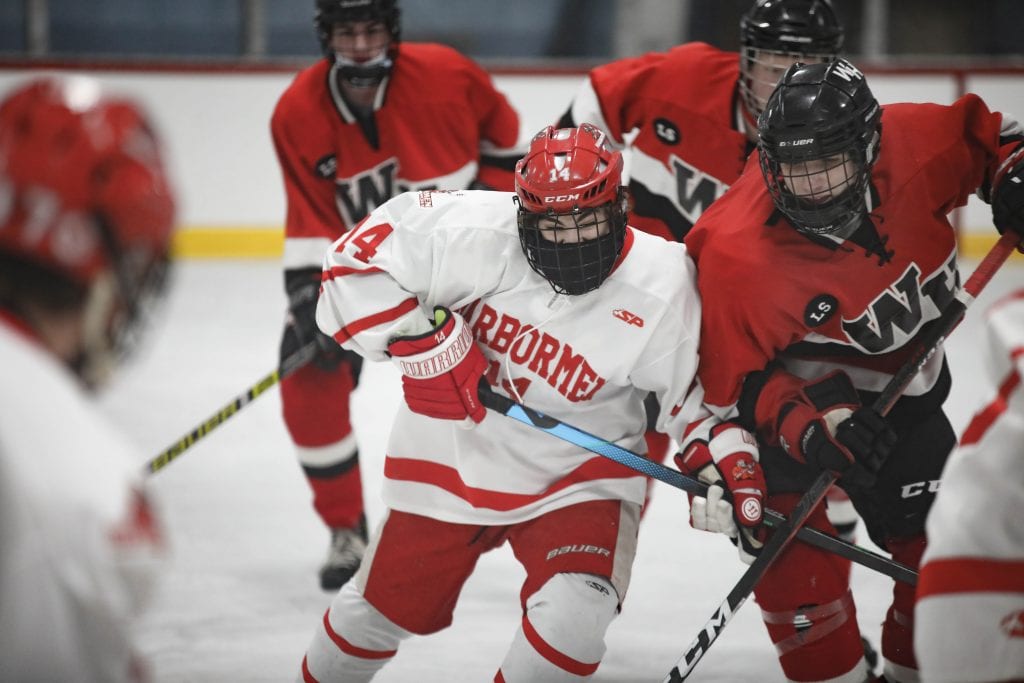 Sophomore Billy Jacobus battles for position on a face-off. 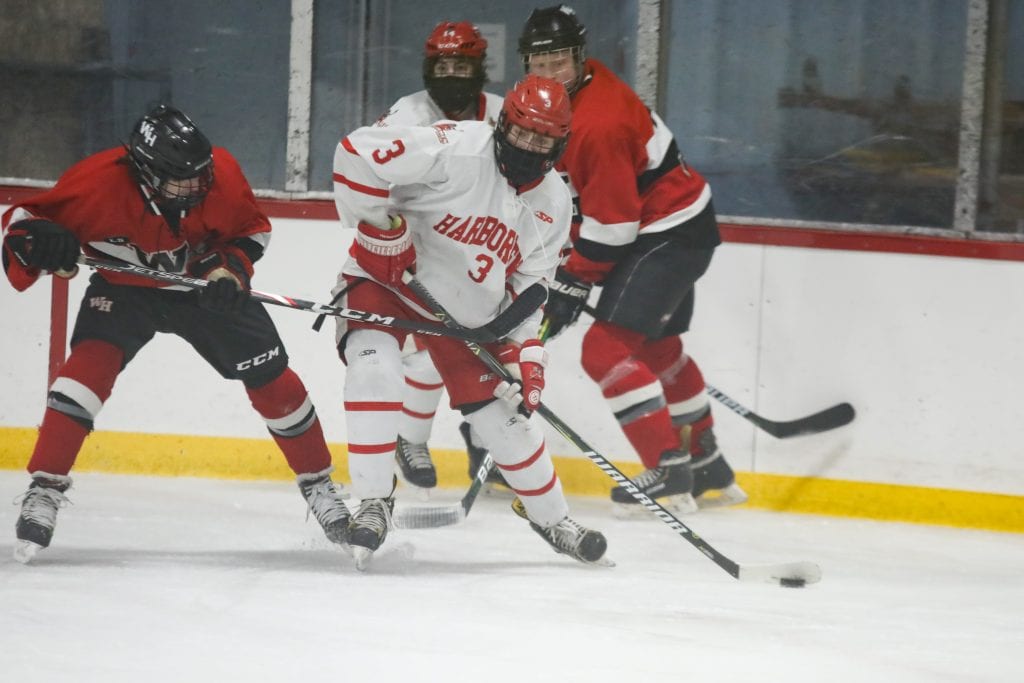 Senior Lars Osterberg looks to pass in the WH zone. 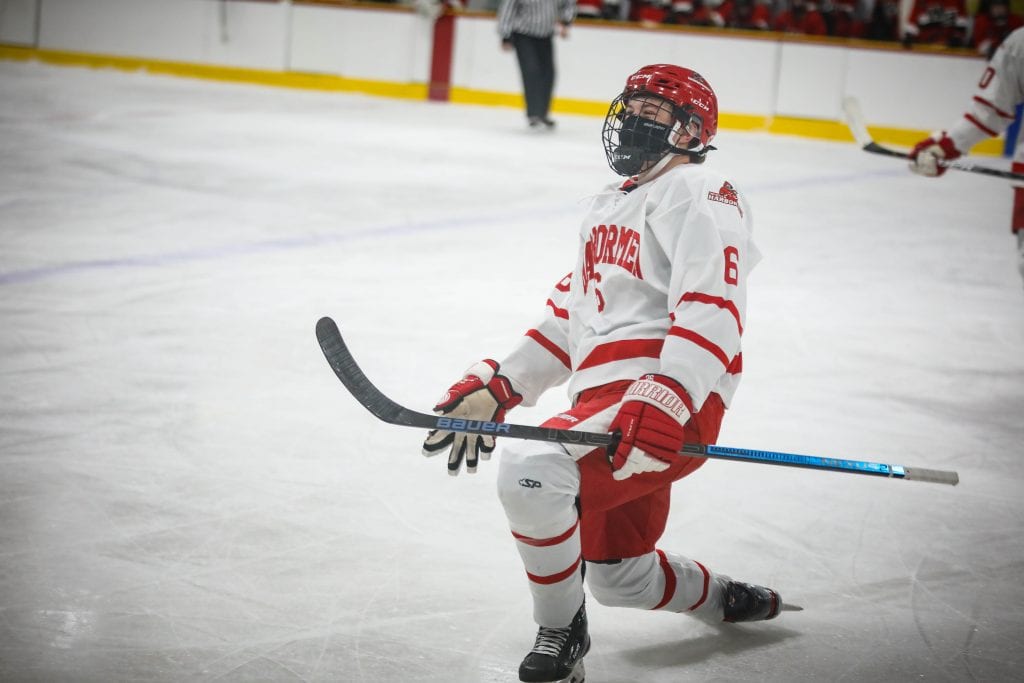 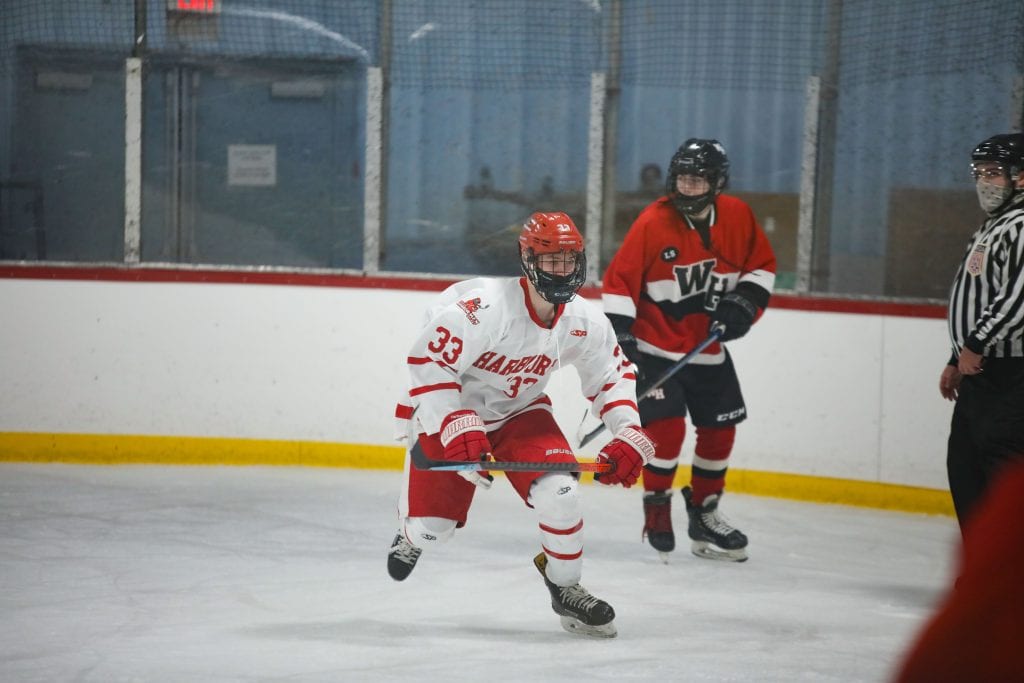 Junior Alex Barzowskas getting open in front of the net. 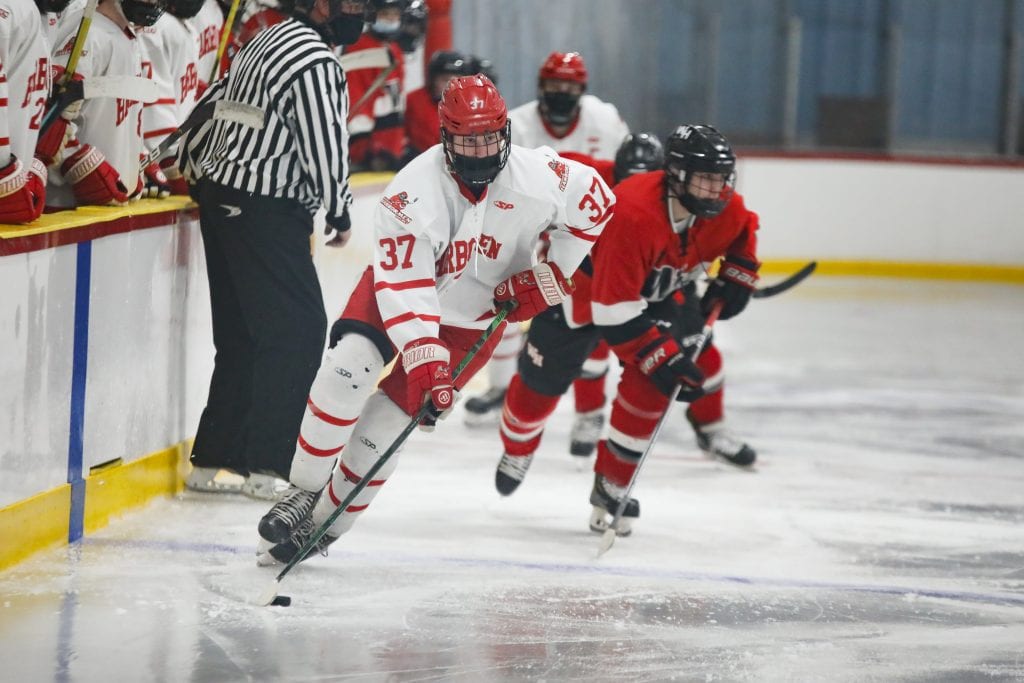 Sophomore Aidan Brazel takes the puck down ice along the boards. 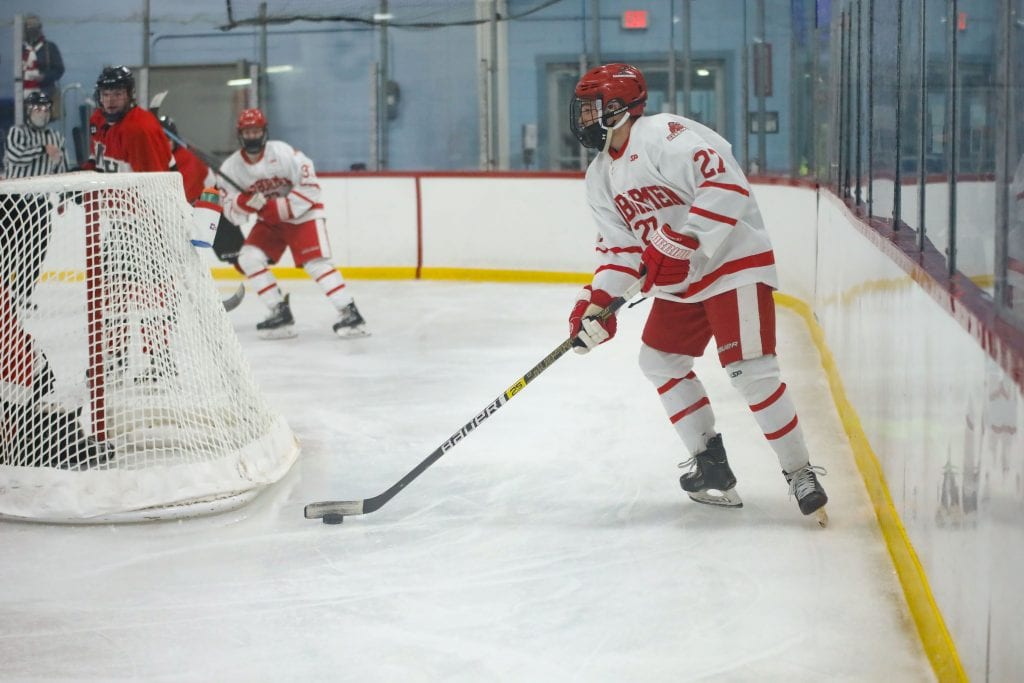 Sophomore Ace Concannon looks for an open teammate behind the WH goal. 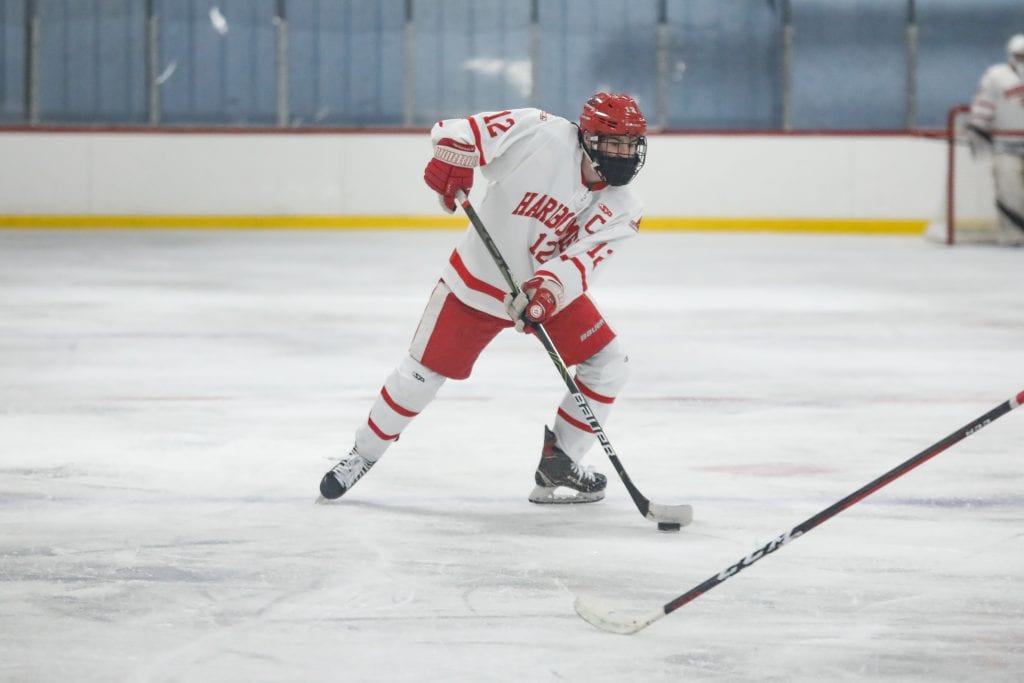 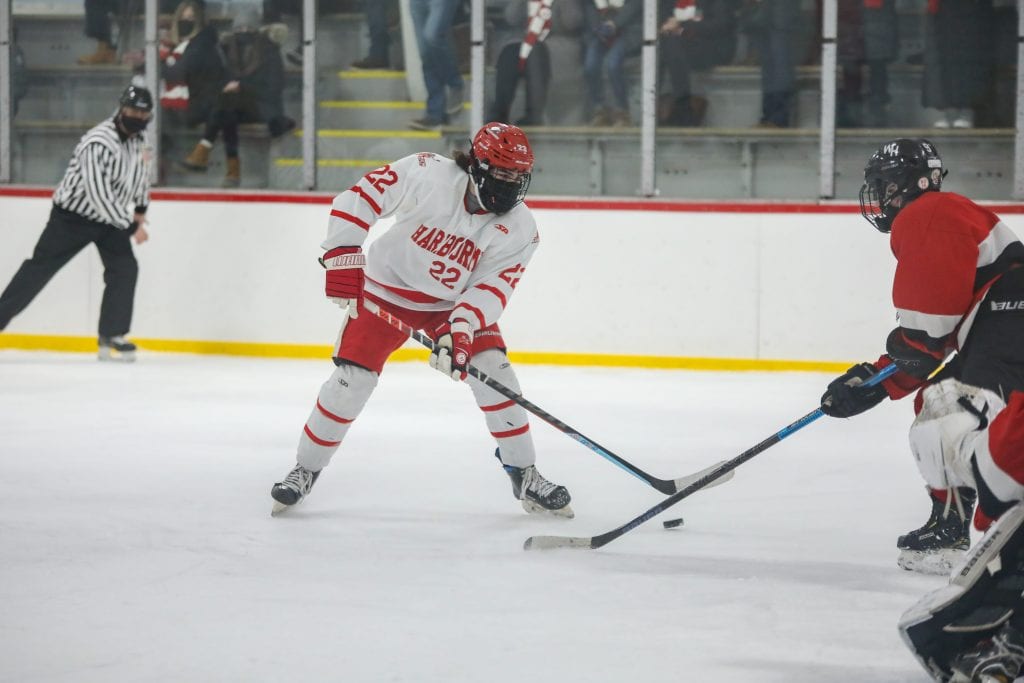 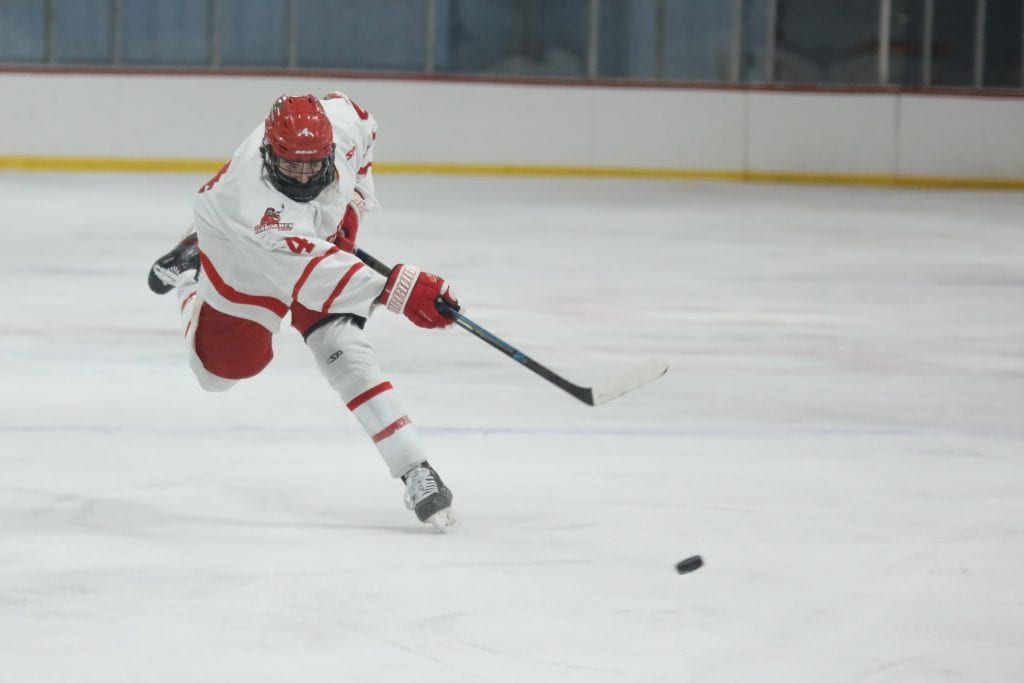 Junior Bobby Falvey fires the puck on a power play. 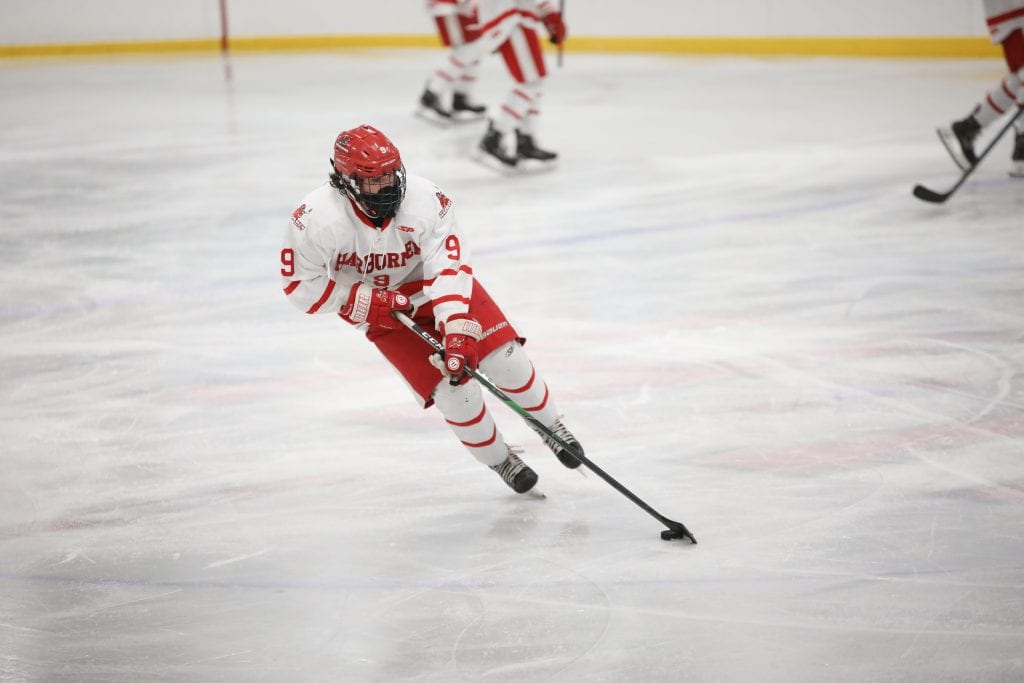 Junior Sean Garrity brings the puck in the WH end. 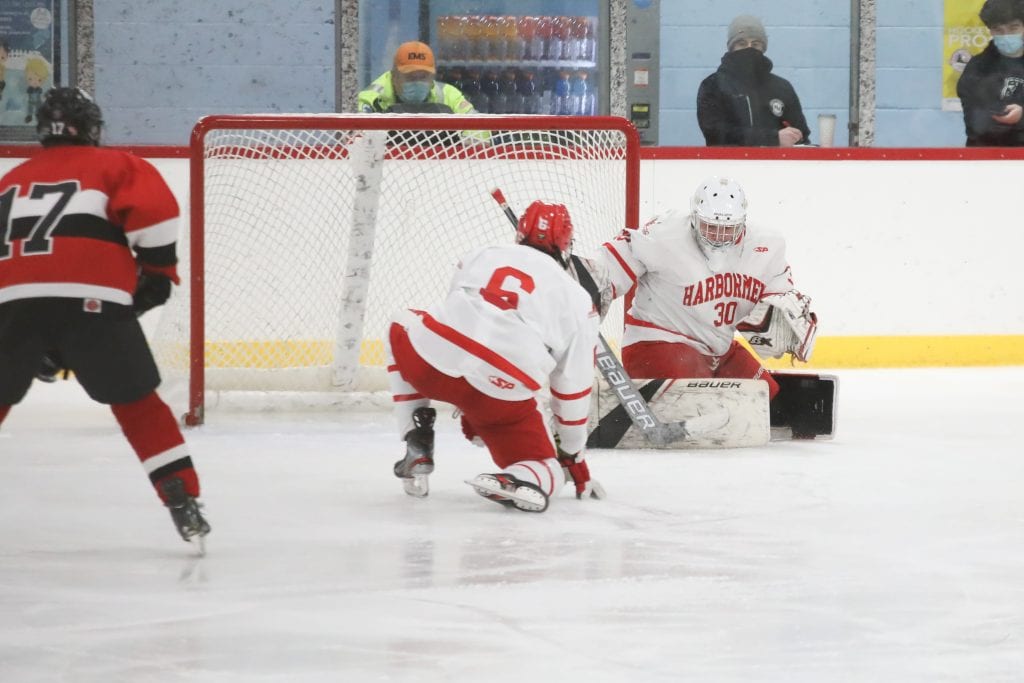