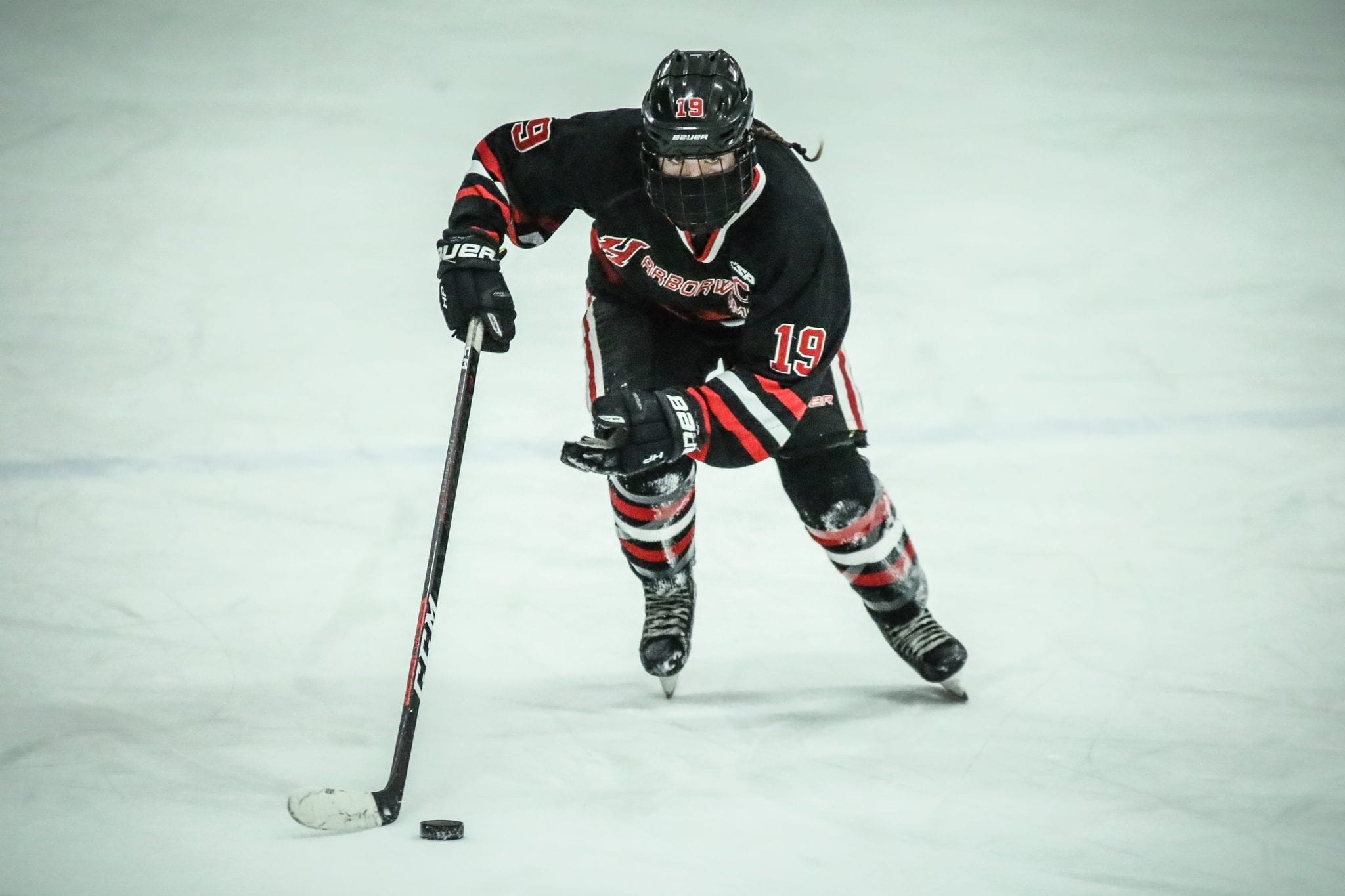 Junior captain Kathryn Karo skates up the ice during the second period of Hingham's 3-2 OT loss to Pembroke.

The girls kicked off the afternoon with their second round match-up against the Fisher division top seed Pembroke.  The Harborwomen played really well, but came up short in OT.  The girls fell behind 1-0 trying to kill off a penalty before sophomore Abbey Kennedy tied it up.  The Lady Titans took the lead with their second power play goal of the period.  In the second, junior captain Kathryn Karo tied it up on a Hingham power play.  The third period was scoreless, although both teams had some chances.  Pembroke ended up scoring in the 4-on-4 overtime 1:30 in on a break away giving them the 4-3 win.

“The two power play goals killed us,” Coach Tom Findley says. “Penalties we shouldn’t have taken.  It was undisciplined.  But, the kids played great.  We just didn’t score.  We had plenty of opportunities and their goalie played great.  Thank god we have another game to play. It’s not single elimination.  The kids really competed today and they played well and I was very proud of them.”

One of the bright spots of the game was the continued impact sophomore Abbey Kennedy is having on these games.  Coach Findley is impressed on her progress.

“She’s very smart, very quick, and great hands,” he said complementing Kennedy. “She’s really learning the game.  She could play at the next level if she really wanted to.  She’s a three sport athlete (field hockey, hockey, and lacrosse) but she’s really smart on the ice.”

The girls are back on the ice tomorrow at 10am at the Bog to face off against Cohasset/Hanover.

Roughly 40 minutes after the girls’ game ended, the boys took the ice to face off against Hanover.   The Harbormen had their shots early in the game, but the Hanover goalie made some great saves.  Sophomore Aidan Brazel put one in the back of the net with 4 minutes left in the first period.  The Hawks brought the game to the Harbormen in the second.  Hingham seemed to be on their heels the the whole period and if it was not for some outstanding saves from senior goalie Theo Jacobs, it would have been a worse period for them.  The second ended up being scoreless with Hingham hanging on to a 1-0 lead.  Something that cannot be said for the third.  Hanover scored 2 goals within minutes of each other giving them the 2-1 lead.  Hingham did answer with a goal from senior Lars Osterberg.  But Hanover kept the pressure on and scored 2 late goals to give them the 4-2 win.

“It looks like we were tired, I don’t know what happened,” Head coach Tony Messina says reflecting on the third period.  “I’ve got to give them a lot of credit, they took advantage of their opportunities.  They like to throw it out to the neutral zone and they got behind our defense a couple of times, a couple of nice shots.  I’m still not sure how the first one went in, but they attacked the net and did a good job.

“We just didn’t look right tonight,” he added. “I don’t know why.  It was just not our game.  We’ve been a third period team all year long. We've outscored our opponents big time in the third period.  Tonight it got turned on us.”

Something to look out for in the next game is the status of junior defensemen Bobby Falvey. He got boarded twice in the game and Messina says he’s not sure how he is. 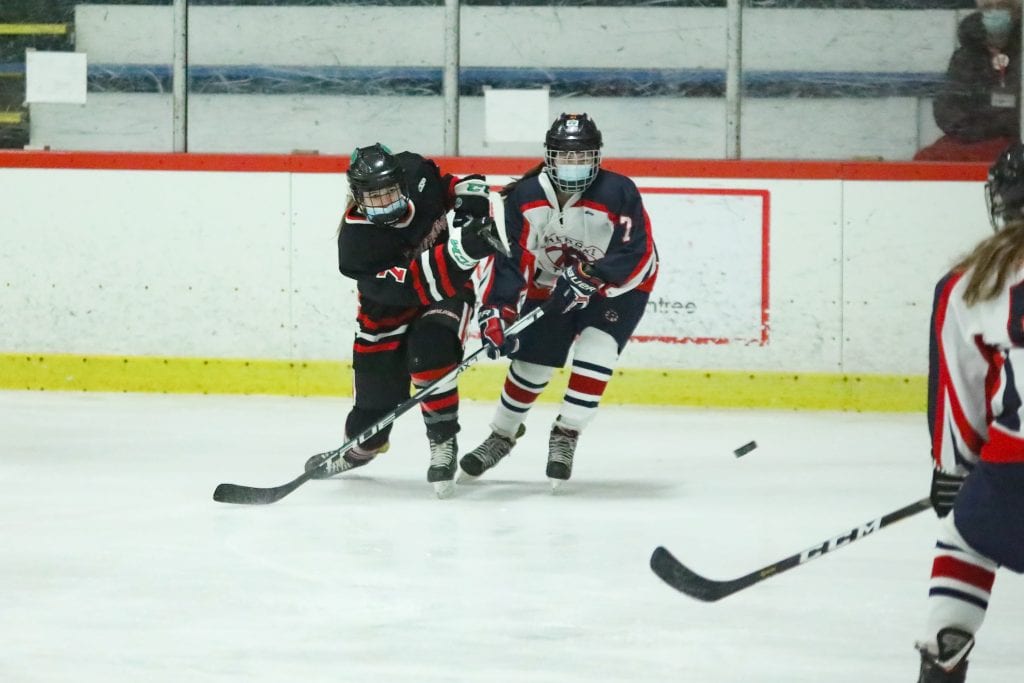 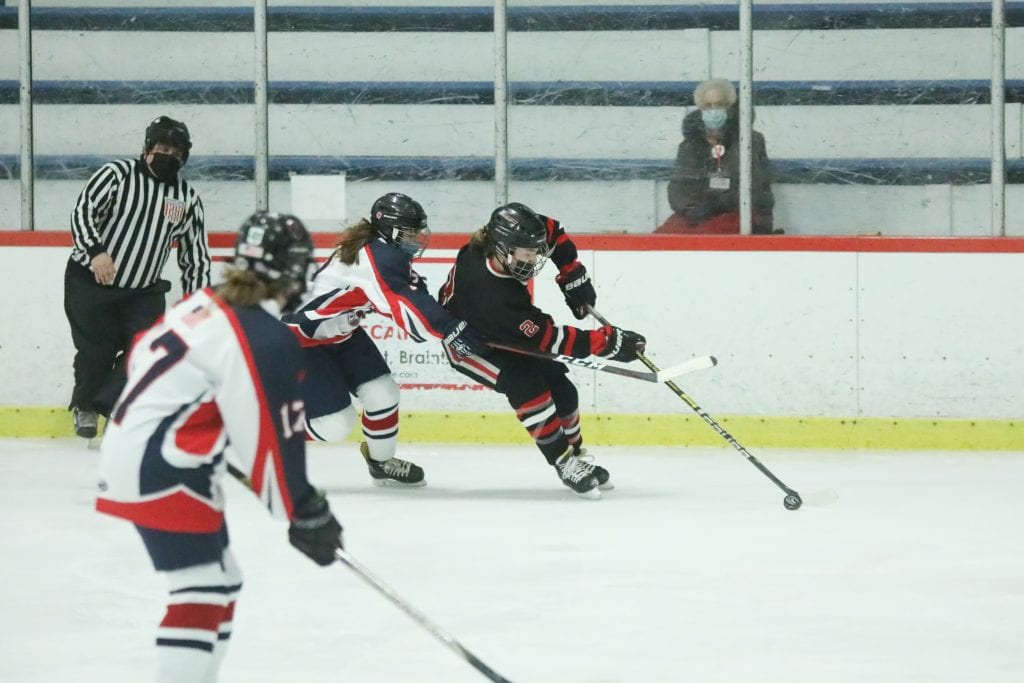 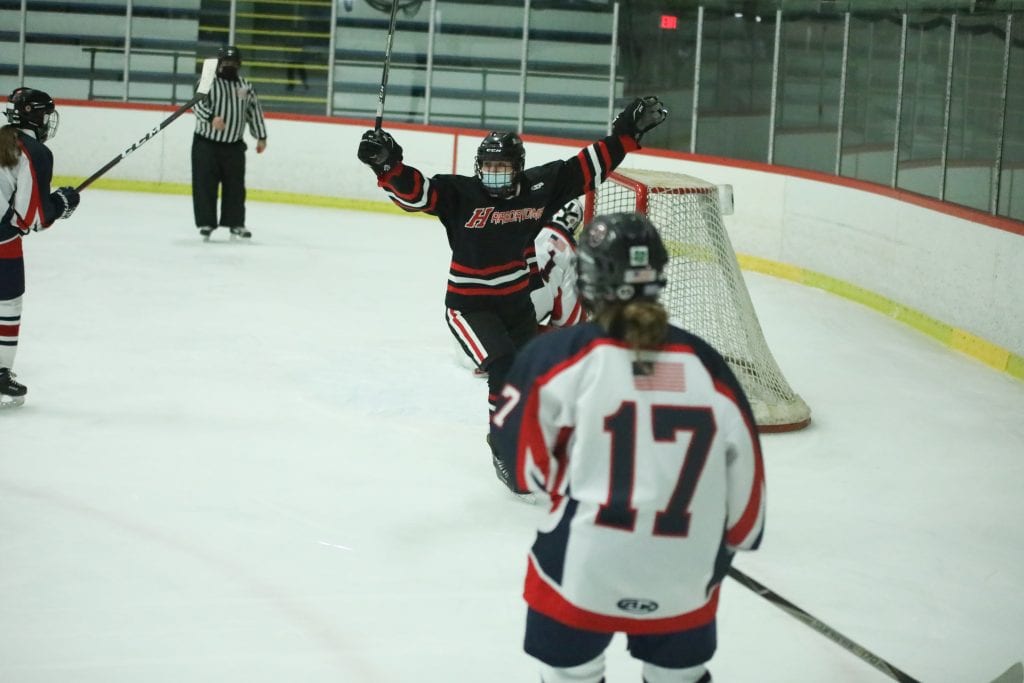 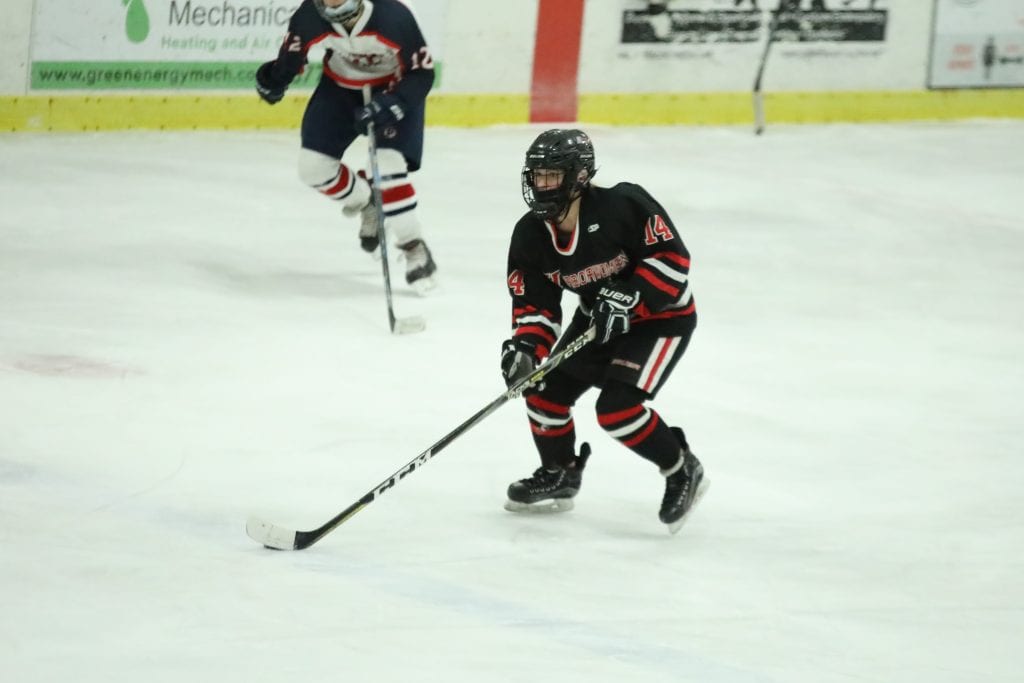 Sophomore Erin Packard carries the puck through the neutral zone. 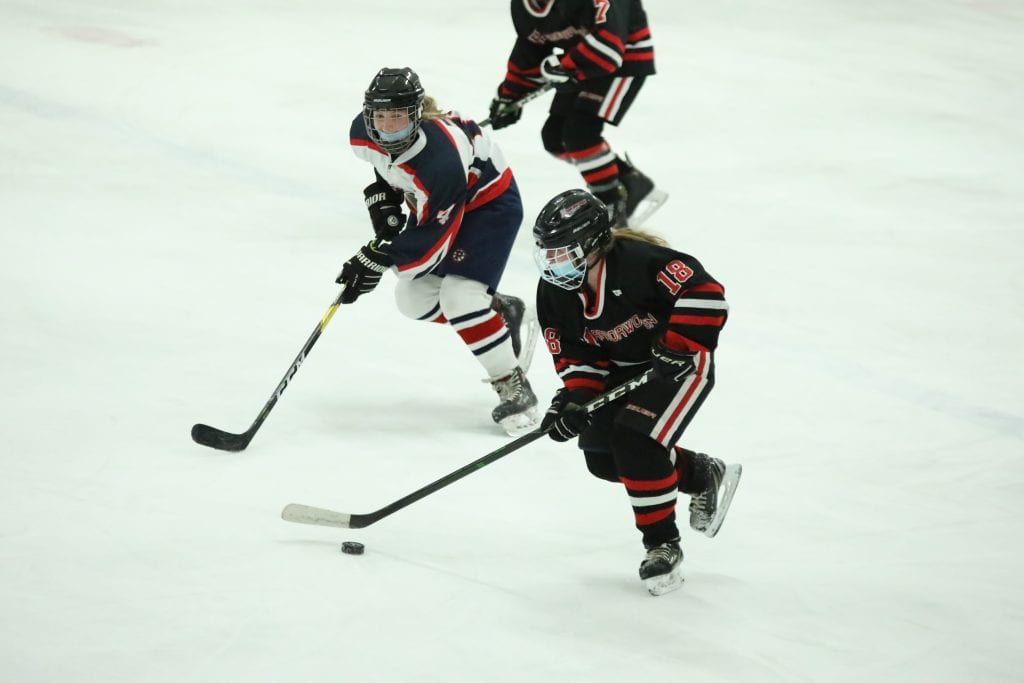 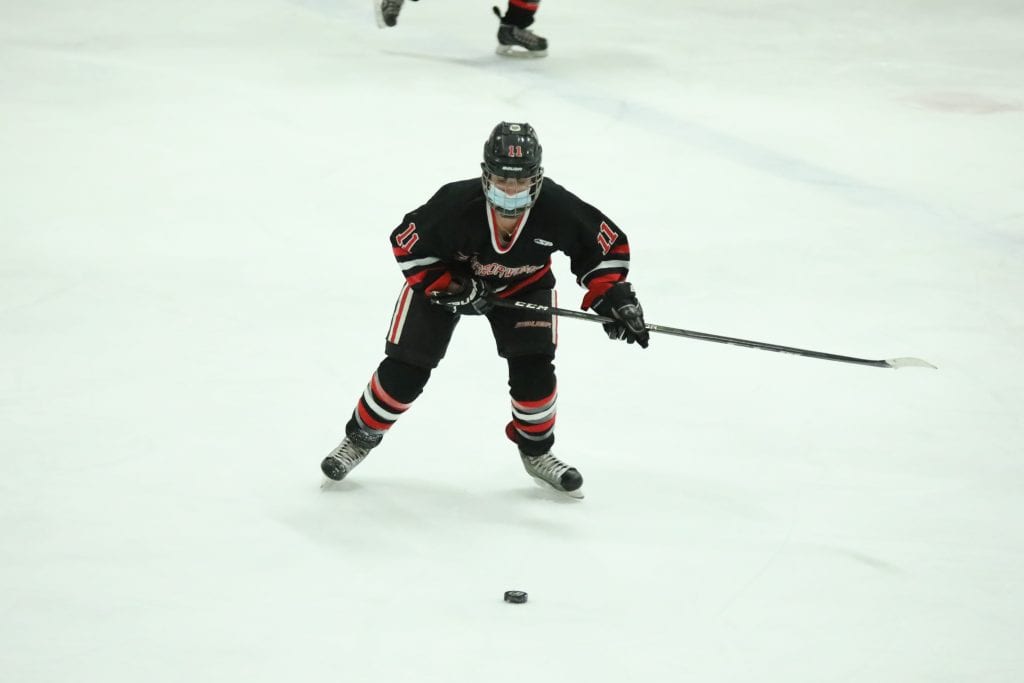 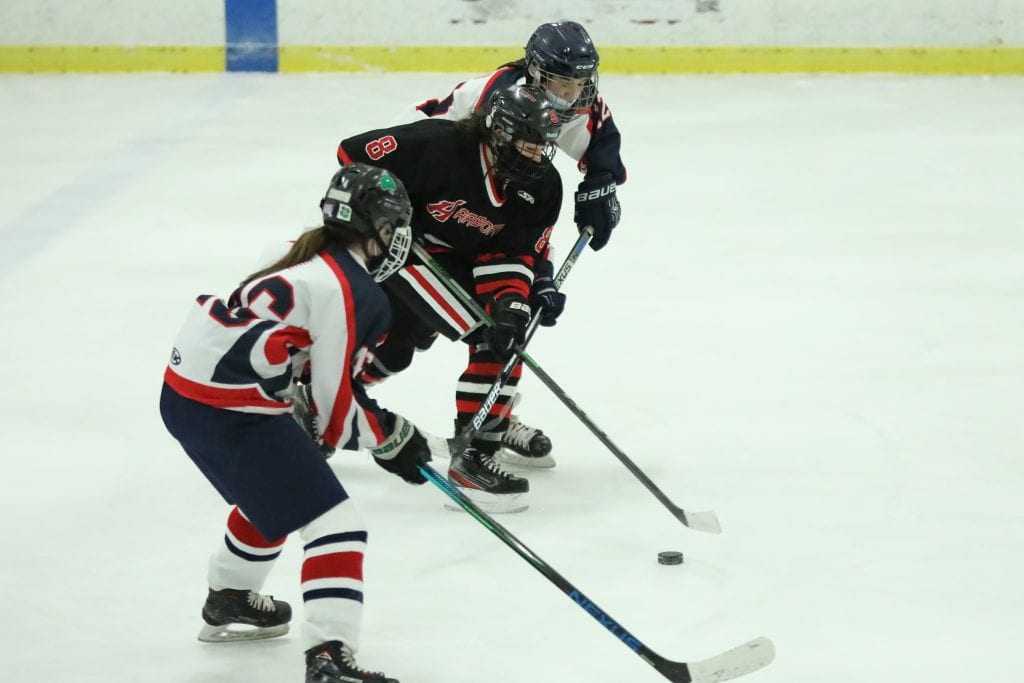 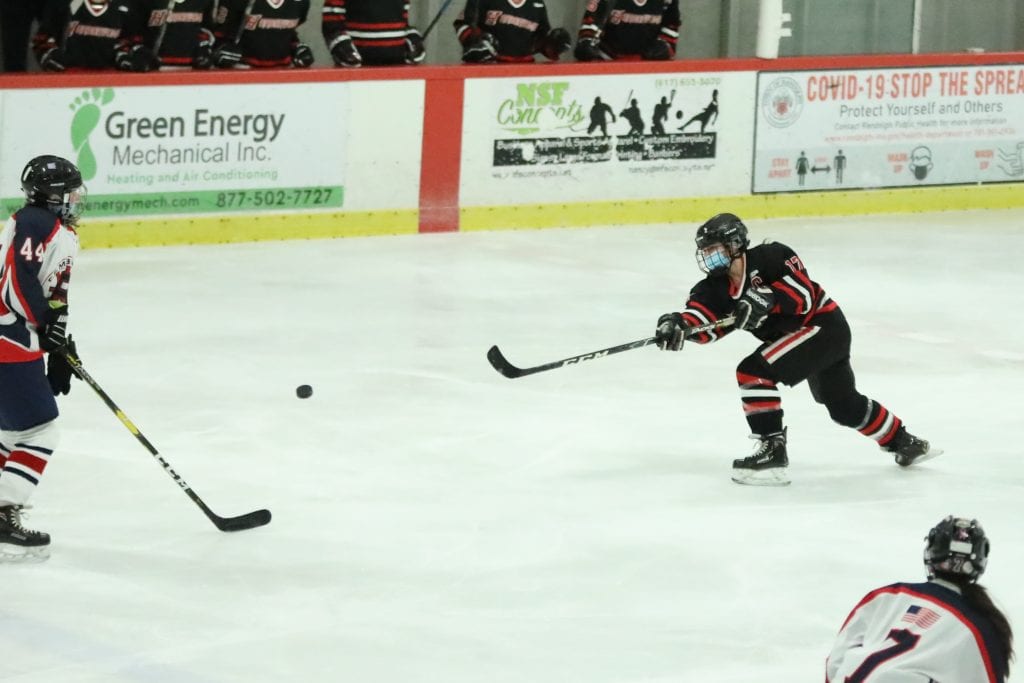 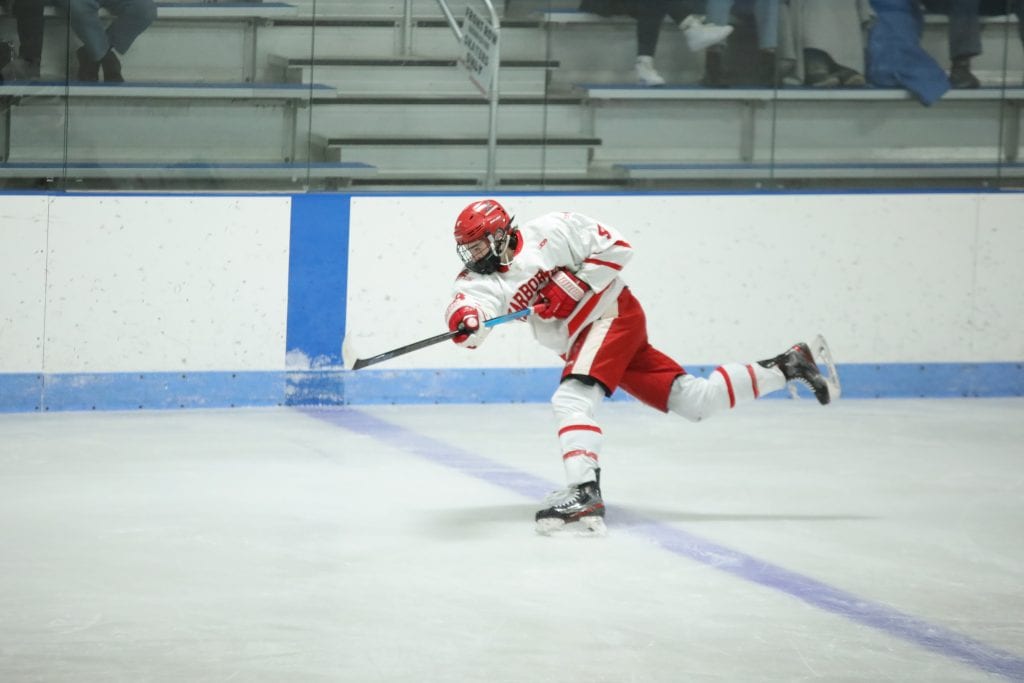 Junior Bobby Falvey fires one from the blue line. 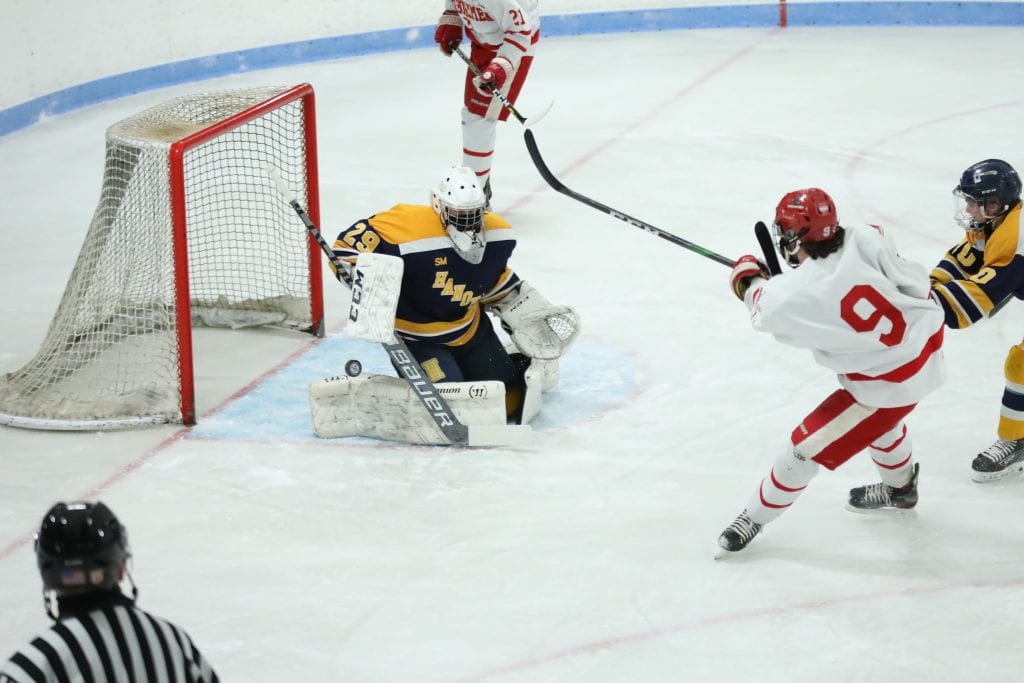 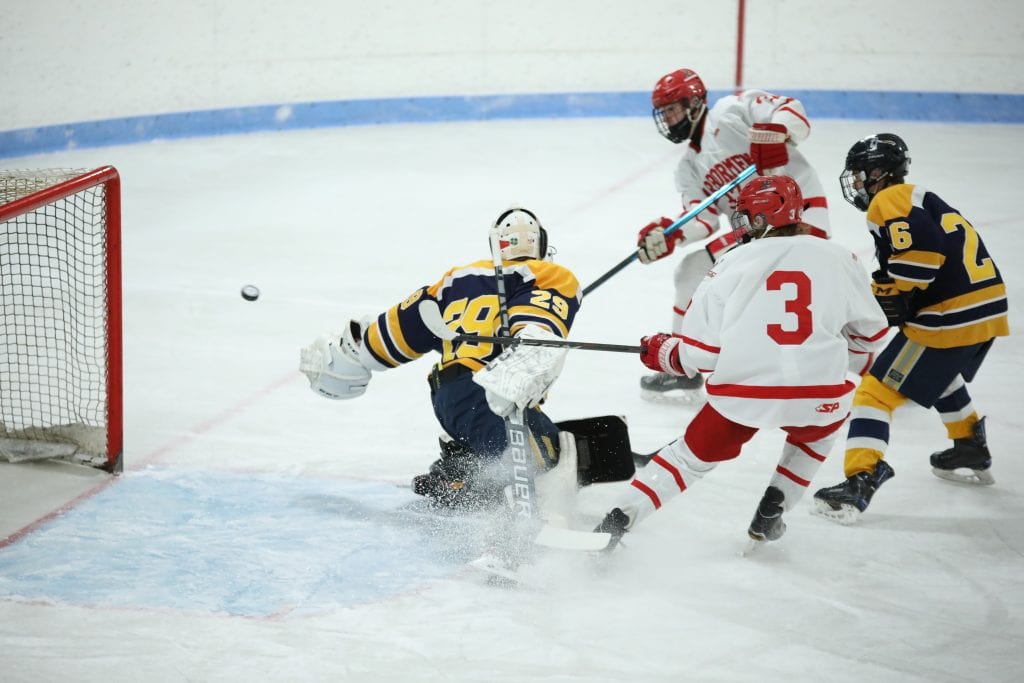 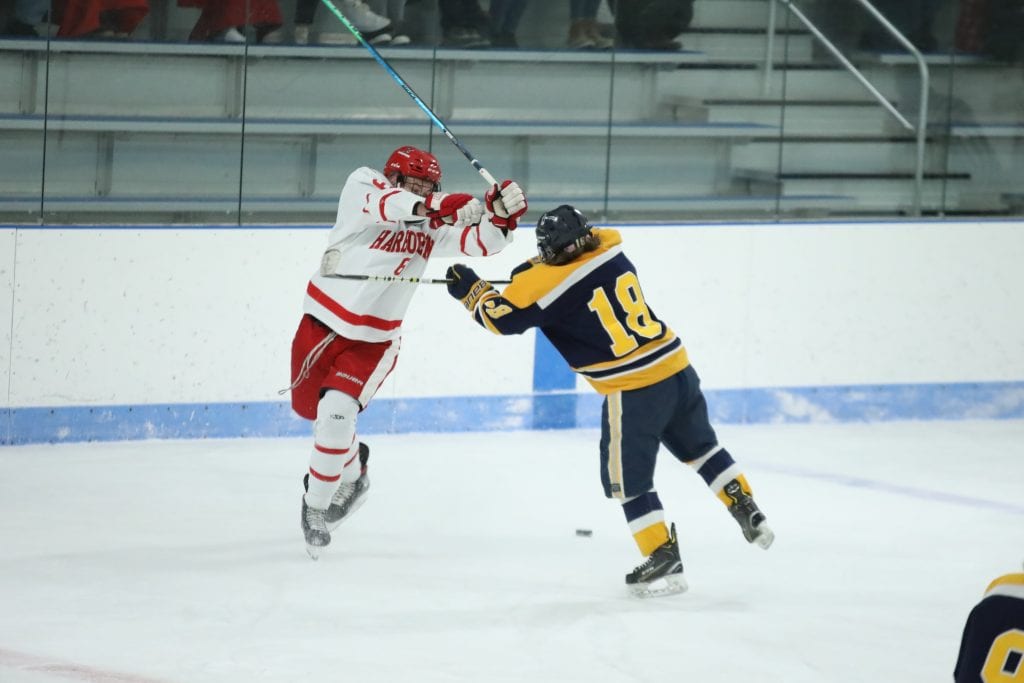 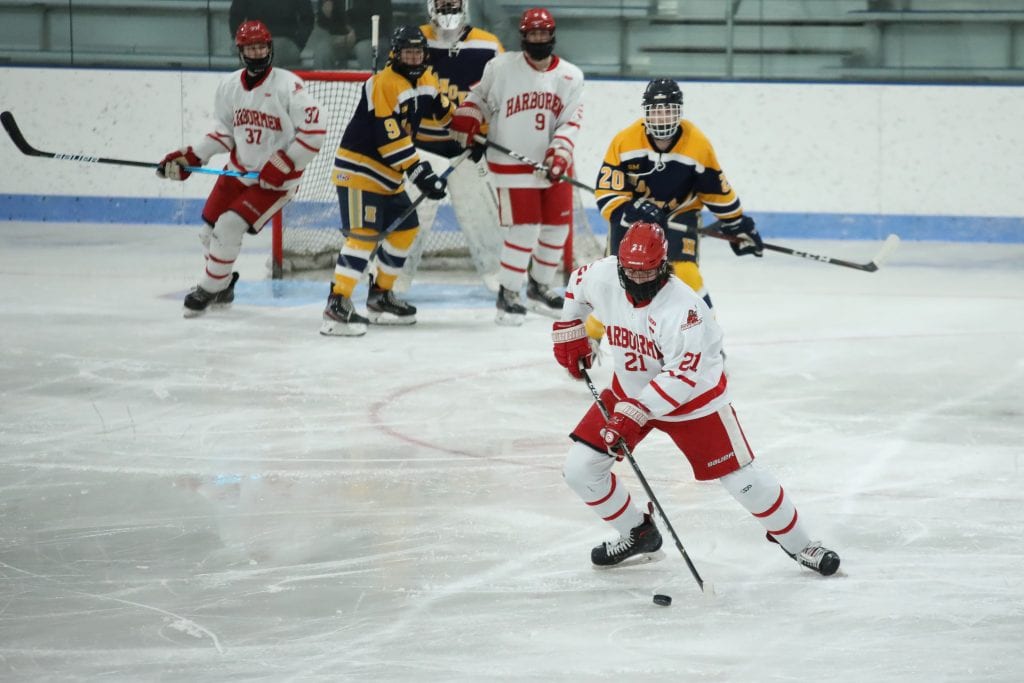 Senior captain Paul Forbes keeps the puck in the Hanover end during a power play. 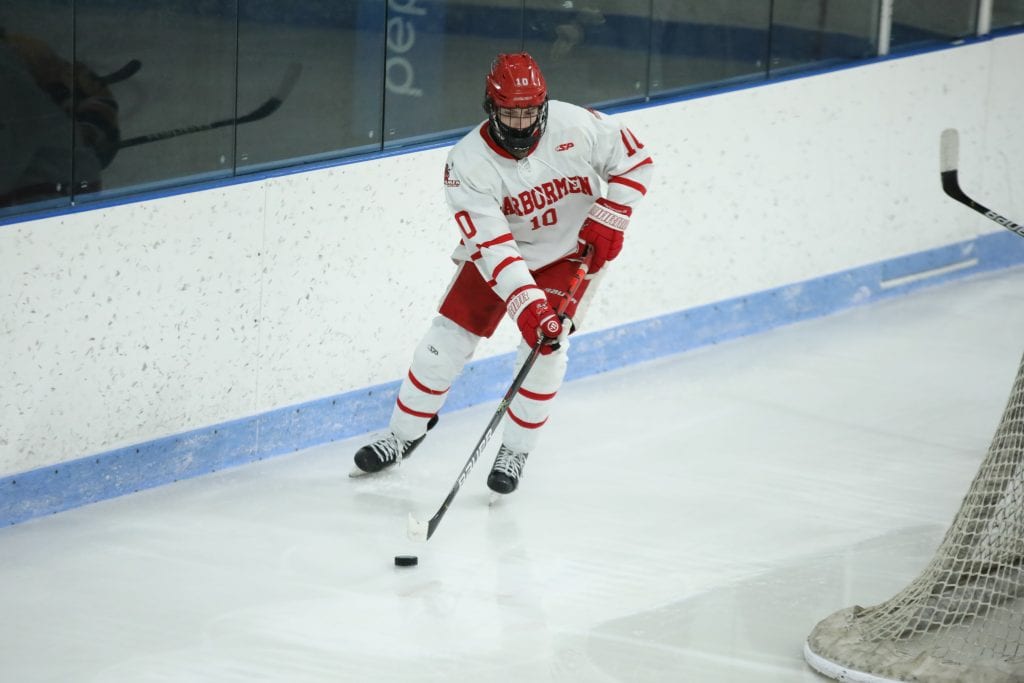 Junior Drew Carleton moves the puck behind his net. 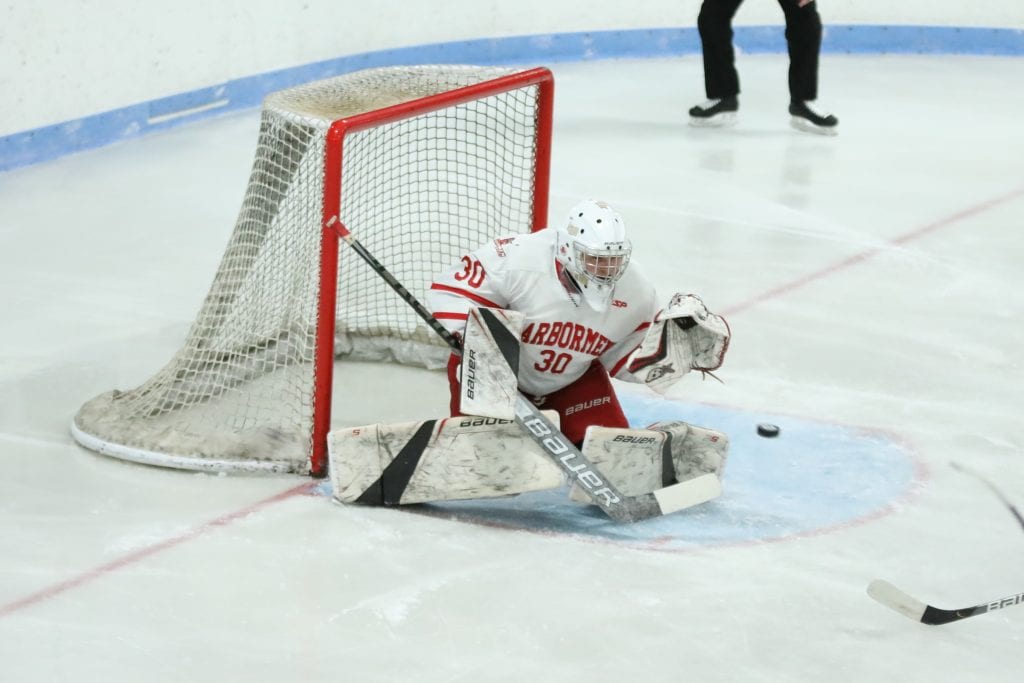 Senior Theo Jacobs came up with some big saves, especially in the second period. 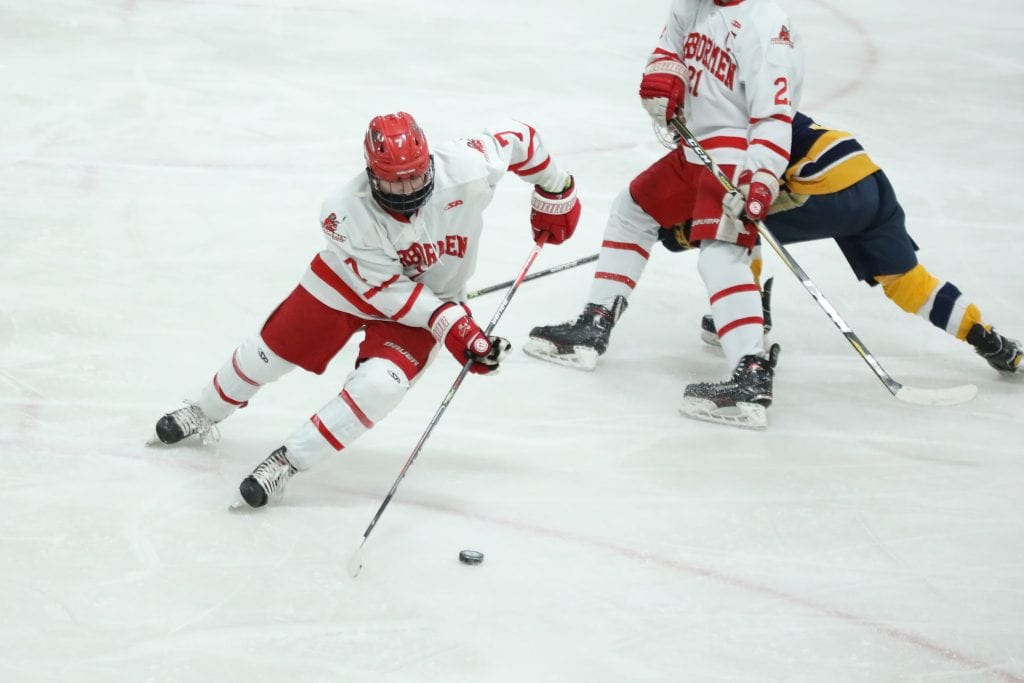 Sophomore Chase McKenna skates the puck out of his own end. 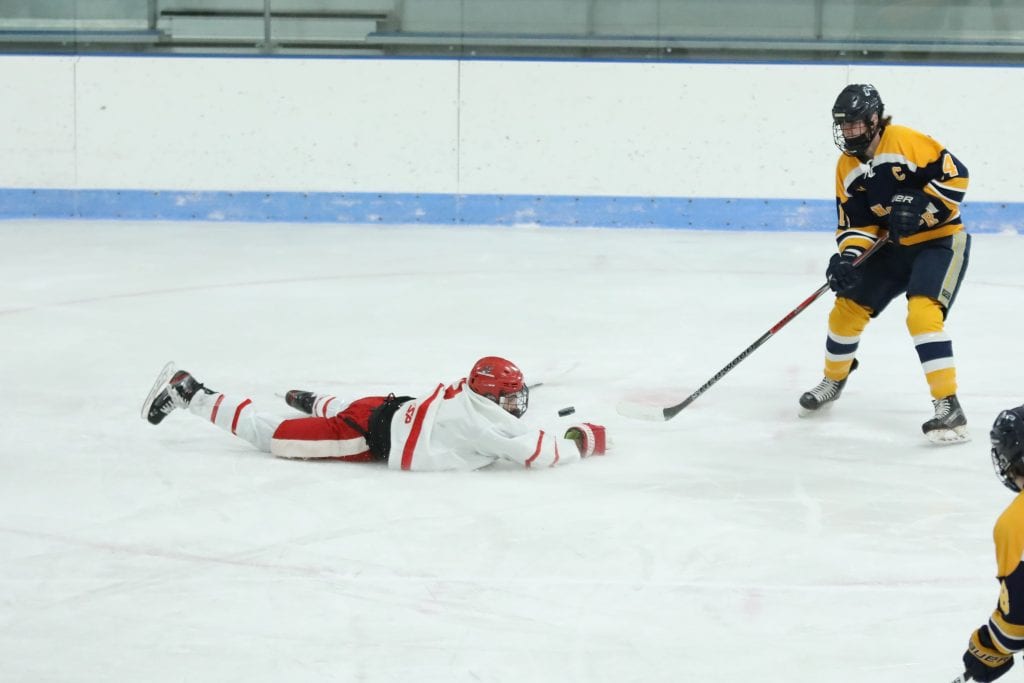 Senior captain Paul Forbes lays out to block a shot. 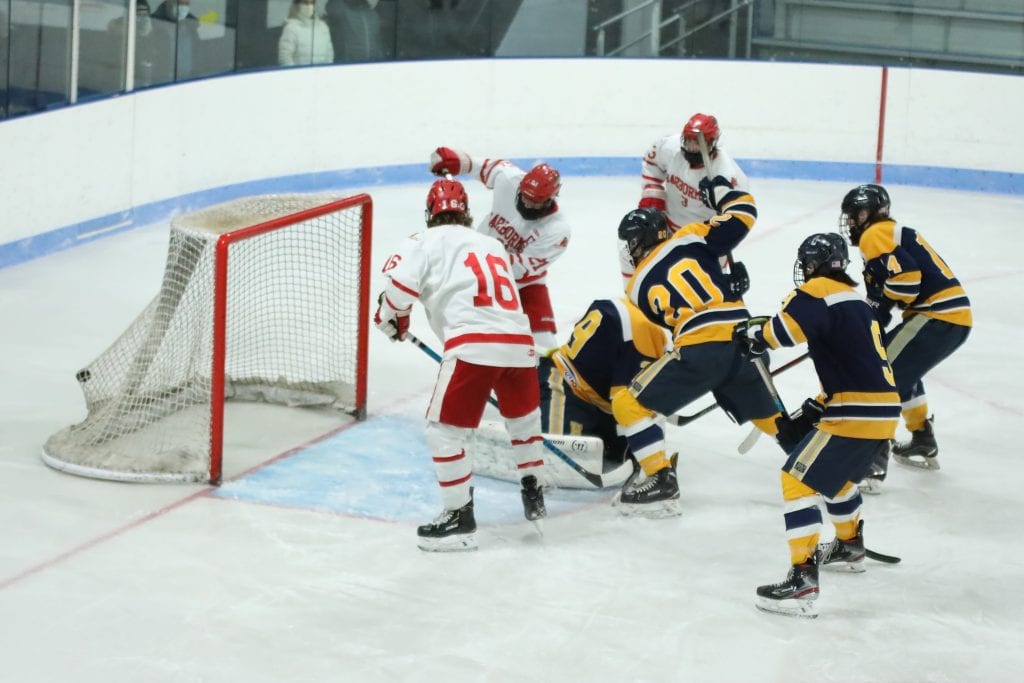 Senior Lars Osterberg puts one in the back of the net to tie the game at 2. 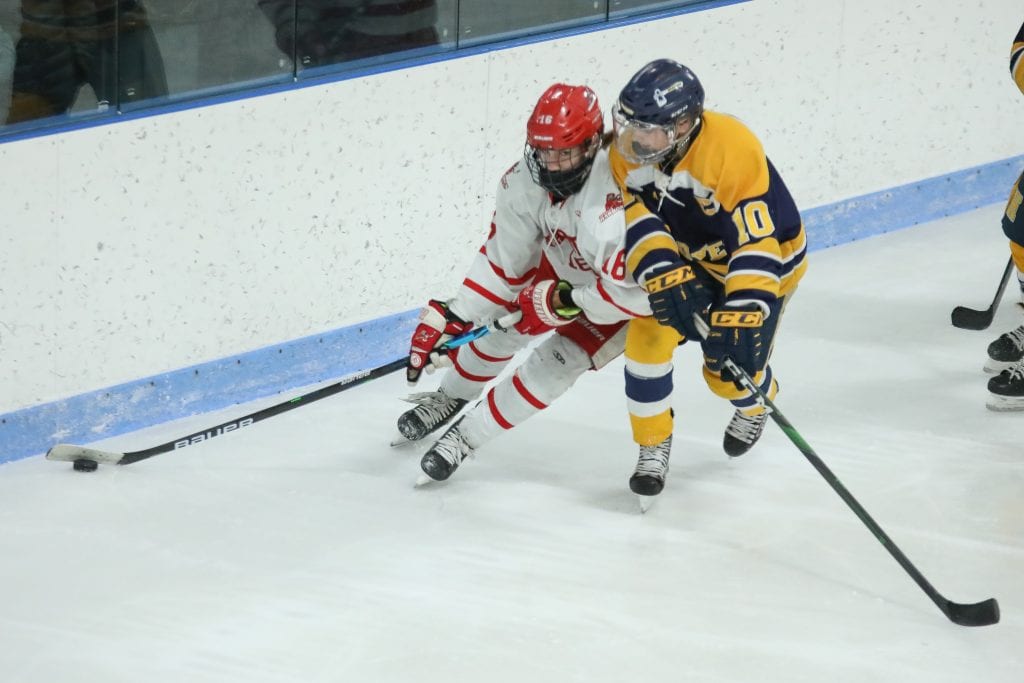