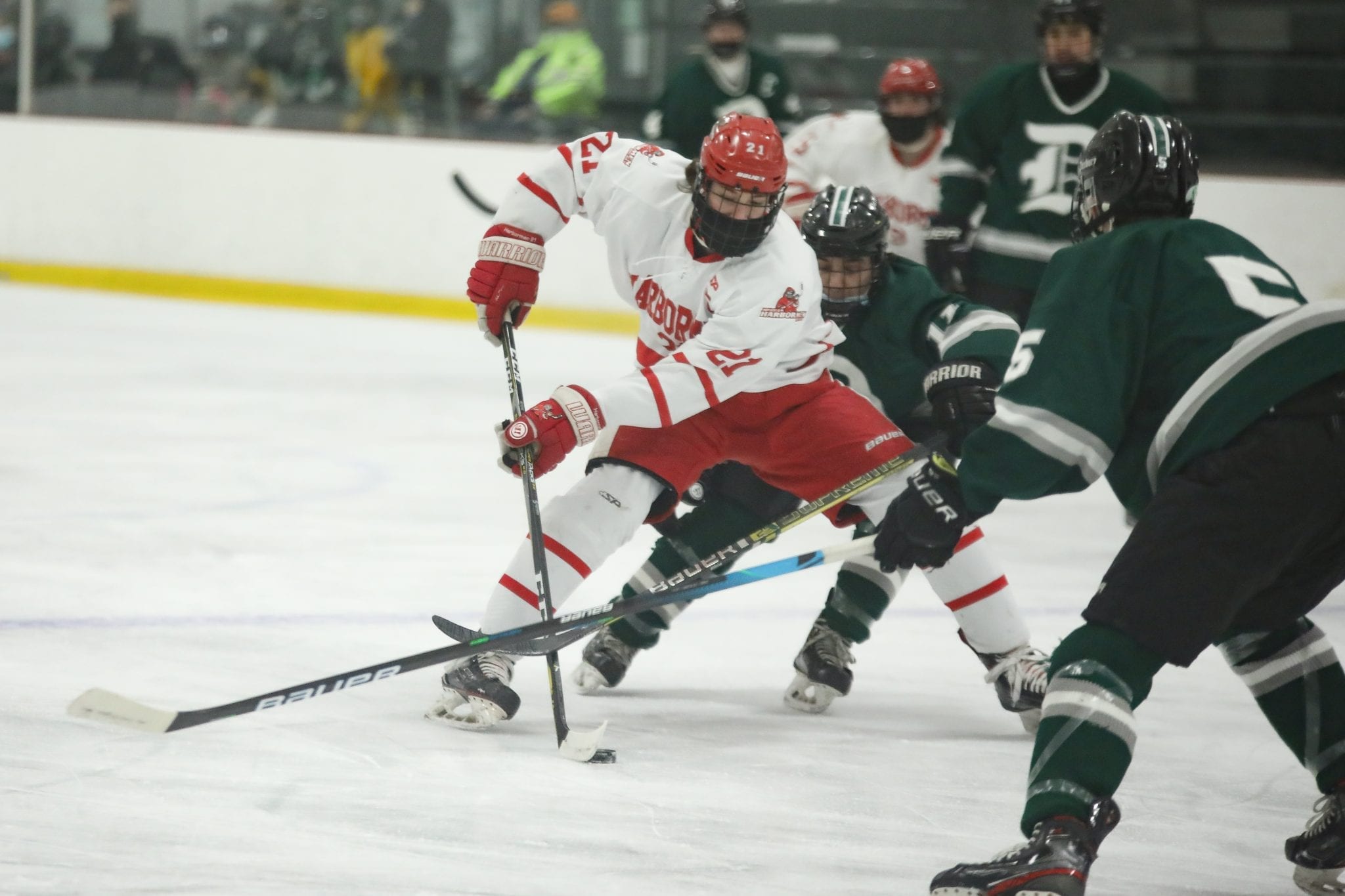 Senior captain and team leader Paul Forbes slices between two Duxbury defenders early in the game setting the tone for the rest of his team.

It’s difficult to beat a team twice in a season. Doing it three times is really challenging.  That’s what the Hingham Harbormen were trying to do on Monday afternoon against Duxbury.  The first two meetings went Hingham’s way, 4-2 and 6-0.  Regardless of their regular season records, both teams were in a do-or-die game where you lose and go home for the season.   Although Hingham was technically the home team at the Bog, there may have been a few extra Duxbury fans in their home ice arena.

If the previous two games were any indication, this game was going to be a physical, emotional, and exciting match-up.  Hingham did have their top line defensemen, junior Bobby Falvey, in the line-up as he was coming off a game where he was boarded twice against Hanover and, according to Coach Tony Messina, was a bit off.   They were missing junior John Choueiri with an apparent arm injury, which occurred during the Hanover game.  Having “open” lockers in these COVID times, one could see the focus on the faces of the Harbormen before the game.

The game began as expected with some chances on both sides and some big hits.  Junior Sean Garrity tipped in the first goal of the game at 13:35.  He moved into position in front of the far post and got a great cross ice pass in front of the crease from senior Evan Corbett that he one-touched in the back of the net.  Less than two minutes later, senior captain Paul Forbes rifled a shot from the right circle that sailed over the goalie’s left shoulder giving Hingham the 2-0 lead.

When asked about the team’s quick start, Garrity says that was part their strategy.

“It was definitely part of the game plan,” says Garrity, who had two goals in the game.  “It was tough to lose to Hanover.  We needed a bounce back game.  This team’s got a lot of character and I think we showed it tonight.”

The second period saw Duxbury have a few chances coming out of the gate, but senior goaltender Theo Jacobs made a handful of big saves not allowing Duxbury to get back into the game.  Jacobs is coming off a loss in which he let in a season high four goals.  He bounced back in a big way yesterday with the shutout.

“The last period of the last game against Hanover, he probably wishes he a few of those back,” Coach Messina said of his goalie. “Kuddos to him for coming out, he was ready. He was ready to play.  He did a great job. Saw pucks coming through screens, made some real nice saves.  It was a complete team effort.”

“Our D was doing a great job clearing out the front of the net,” Jacobs says.  “Last time we played them they were getting shots from the point and that’s how their goals came.  I was telling them (defense) to block out because if I can see them, I’ll try and make the save.”

Hingham added three more goals in the second period - two by junior Drew Carleton on from just inside the blue line, and one more from Garrity cutting to the net again.  Sophomore Ace Concannon added the Harbormen’s sixth goal of the night, and the first of his career to cap off the 6-0 win.

“We beat them twice, but you hate to play a team three or four times because you never know what is going to happen,” says Messina. “(We) owe it to the players.  The captains and the seniors got everyone ready.  When we put the puck to the net good things happen.”

The coach was pleased the way his team came out to start the game, given the results from Saturday.

“I said to them the start was very key,” he went on to say. “Doesn’t matter what the score is, it’s the start  We’re playing our game, we’re moving hard, that’s what we want, to set the tone.”

The Harbormen were 3 for 4 on the power play and Messina says “we stressed from Saturday night until now, putting pucks on net.  Some of them weren't the greatest shots, but sometimes you surprise them when you get traffic in front, you can score some goals that way.  It was good to see the power play do well.”

The team has only one day off before their semi final game against Scituate on Wednesday night down at Gallo Arena in Bourne.  This will be the Harbormen’s third game in five days.  But they have had stretches like this during this crazy season and know how to prepare.

“We are just going to rest up, stay focused, start planning for Scituate, and get ready to go,” said Garrity. 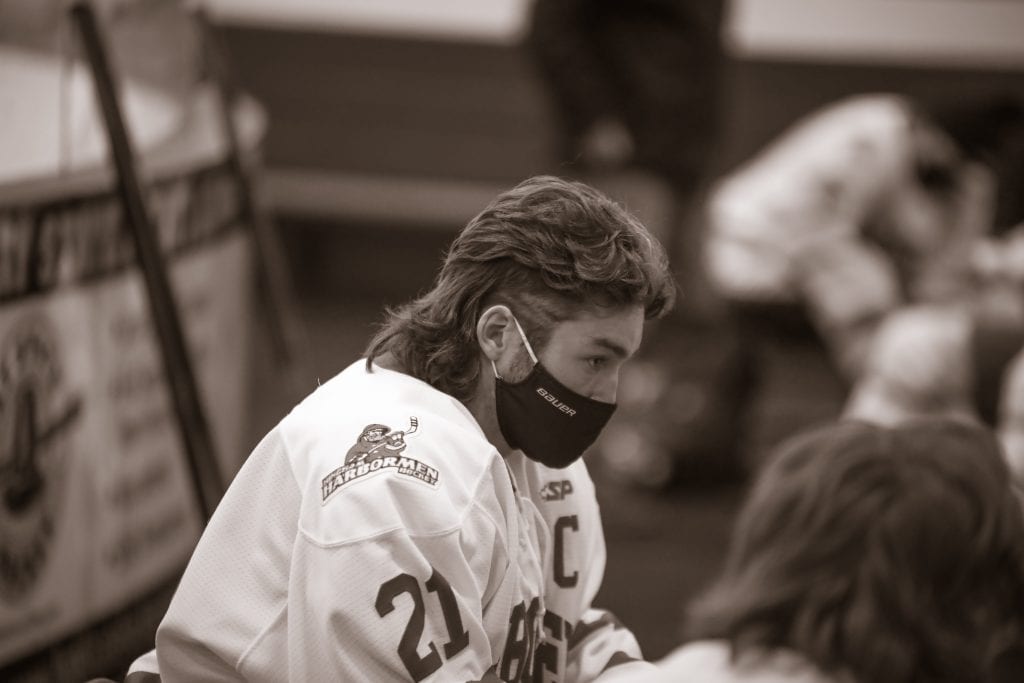 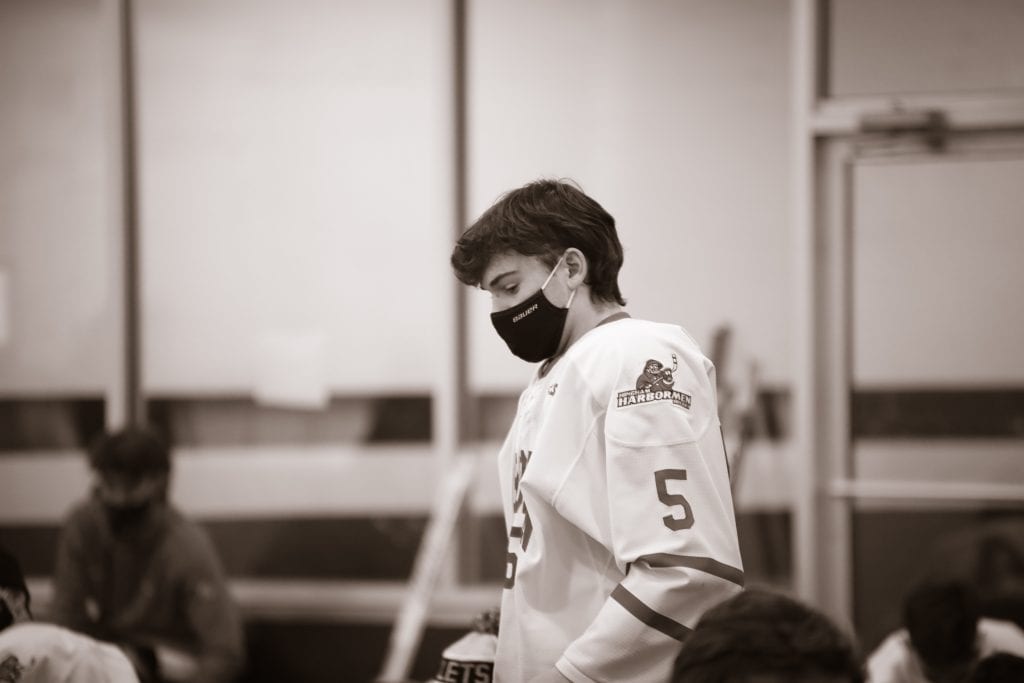 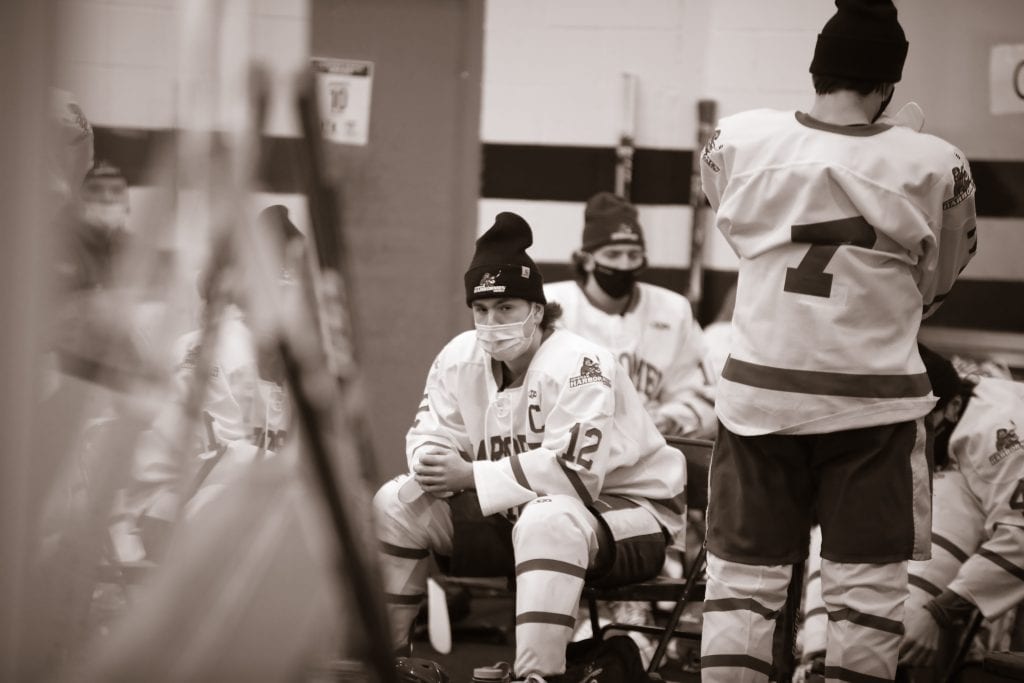 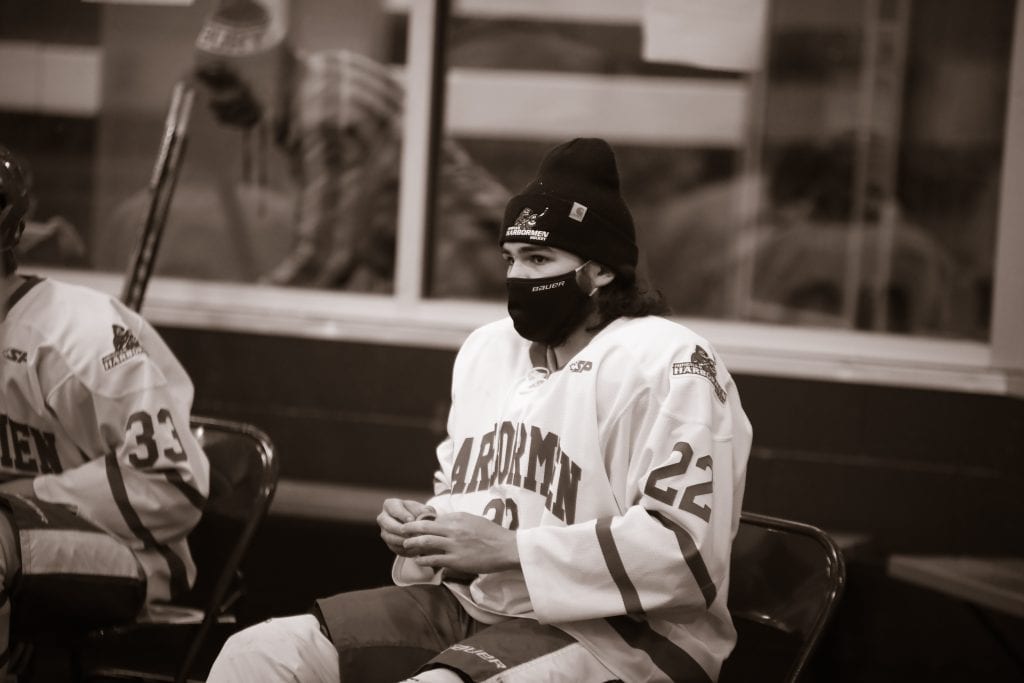 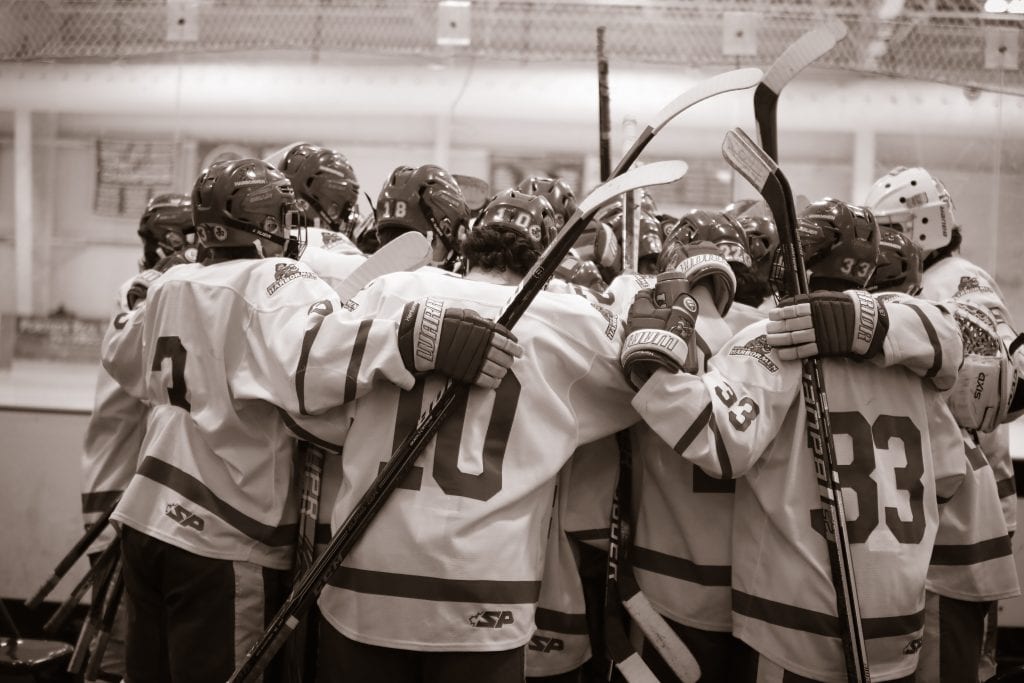 The Harbormen getting ready to take the ice. 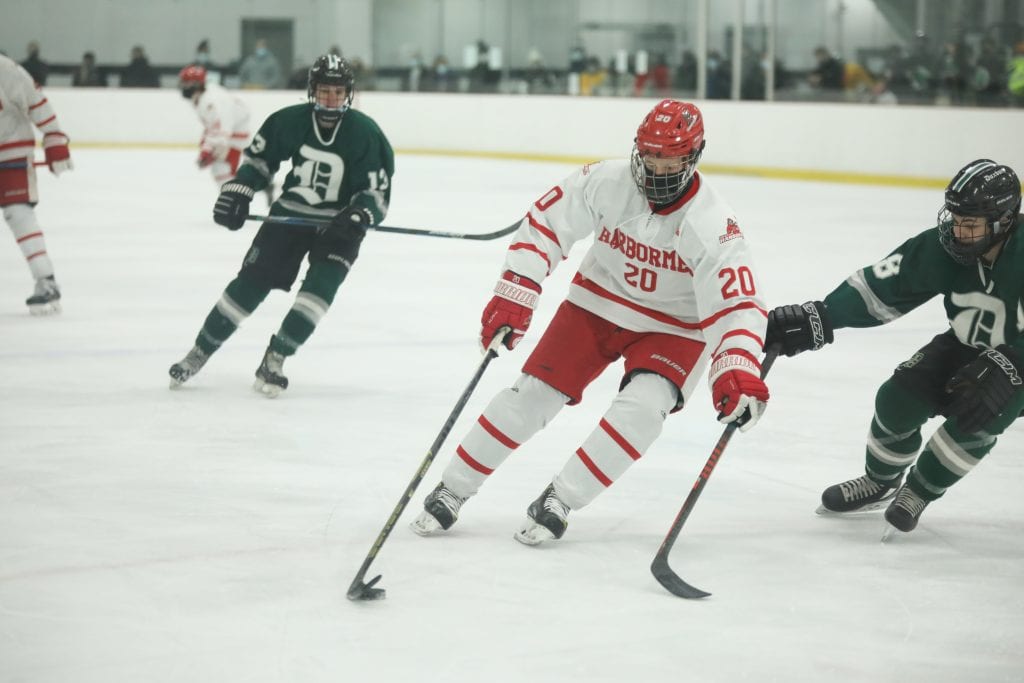 Sophomore Allu Linna makes some room for himself to get around a Duxbury defender. 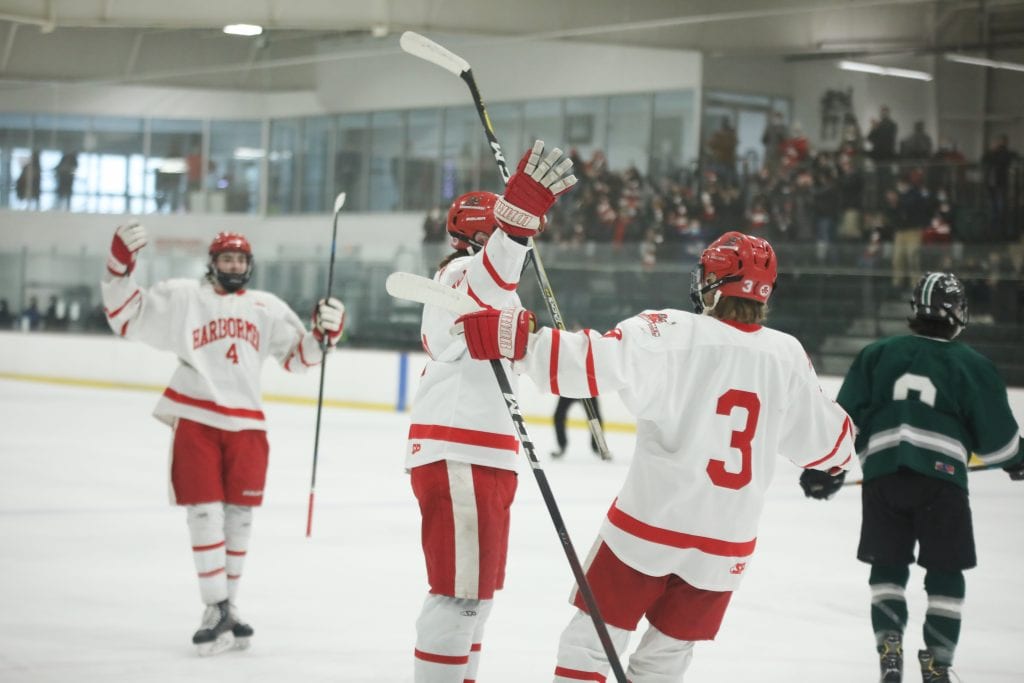 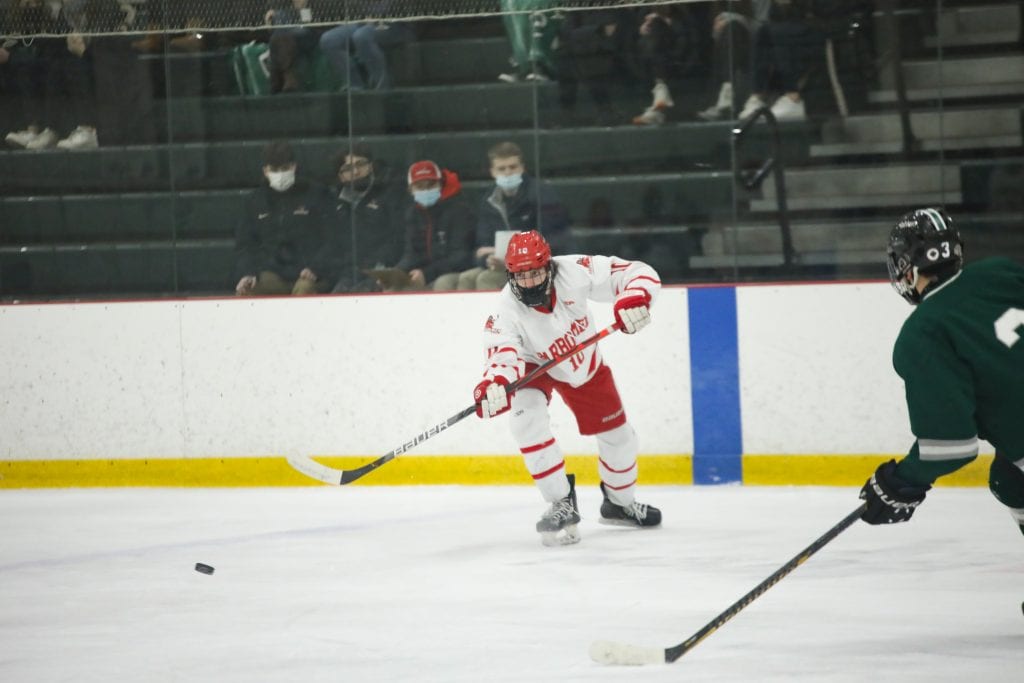 Junior defensemen Drew Carleton with two goals on the day. 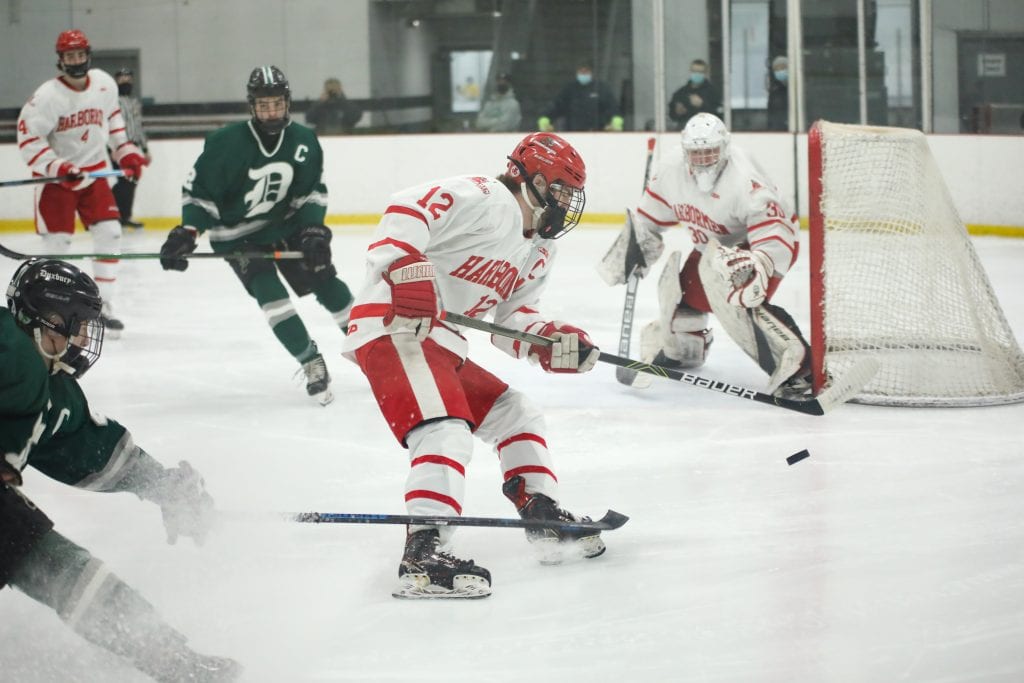 Senior captain Tommy McNally tracks the puck down in his defensive zone. 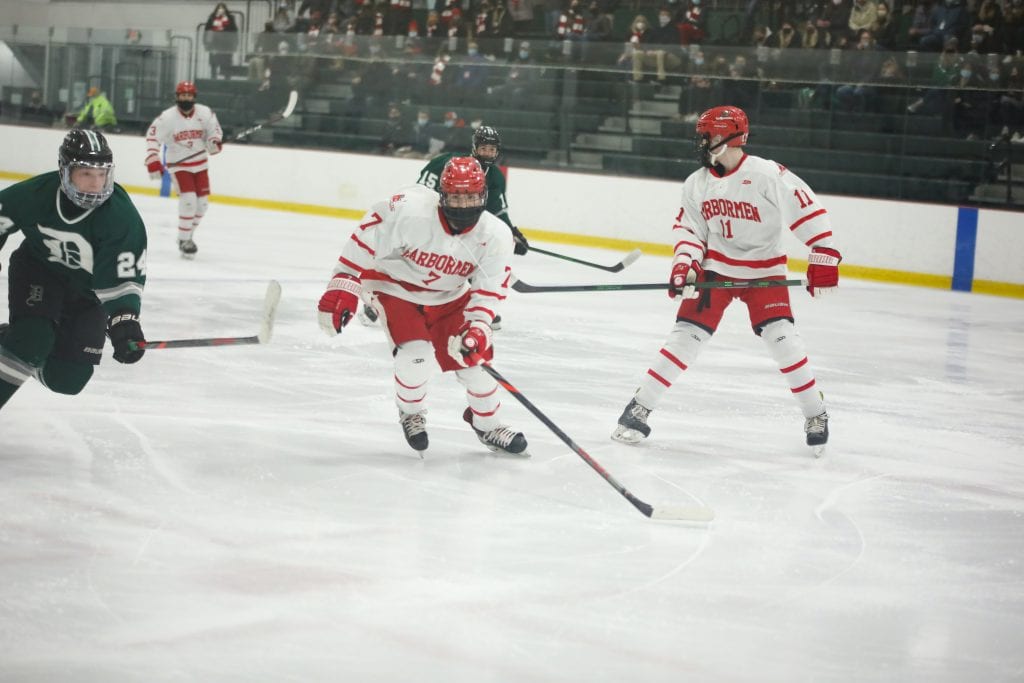 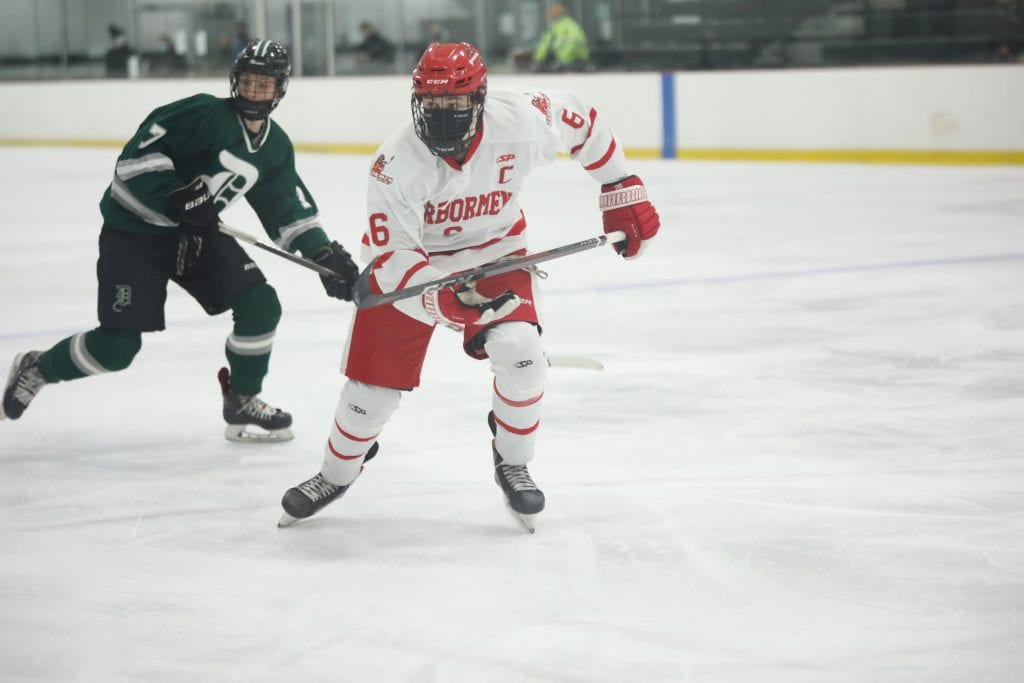 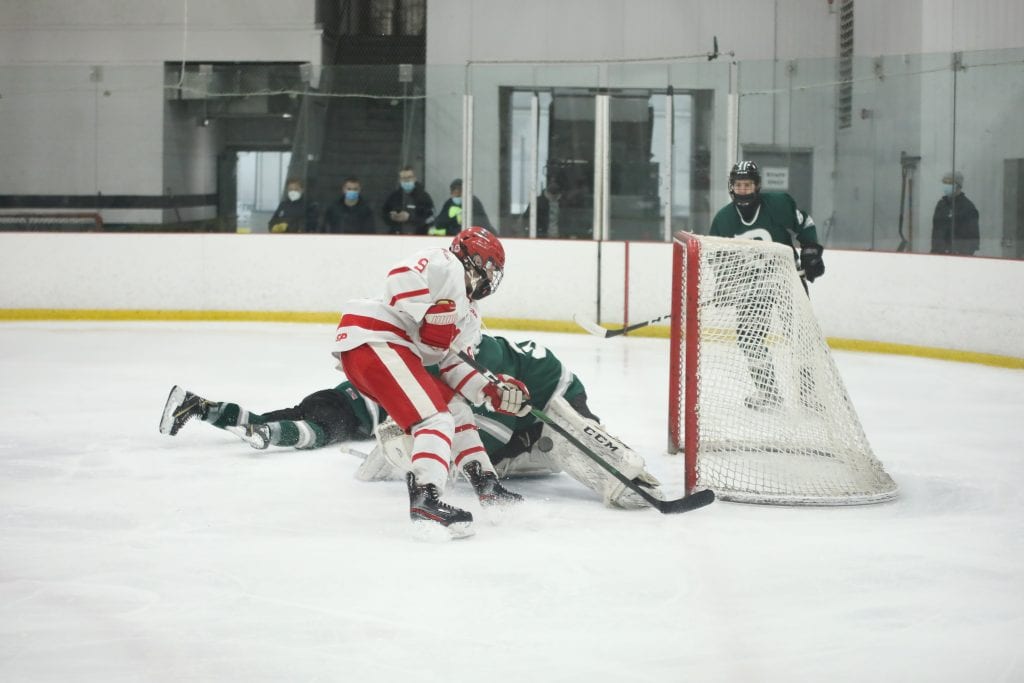 Junior Sean Garrity came this close to getting a hat trick. 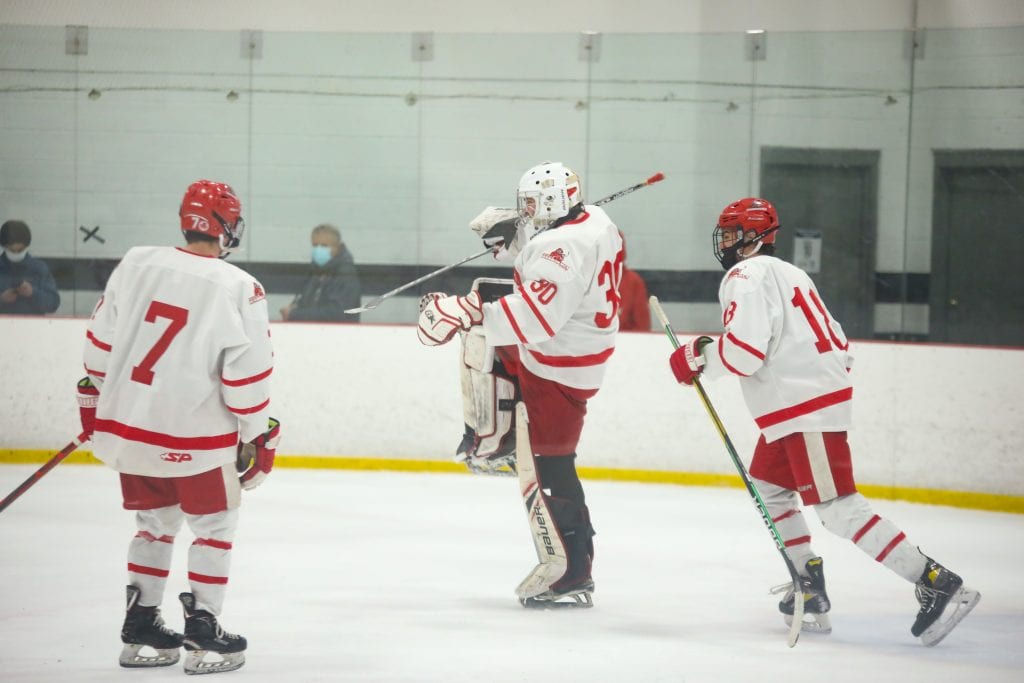 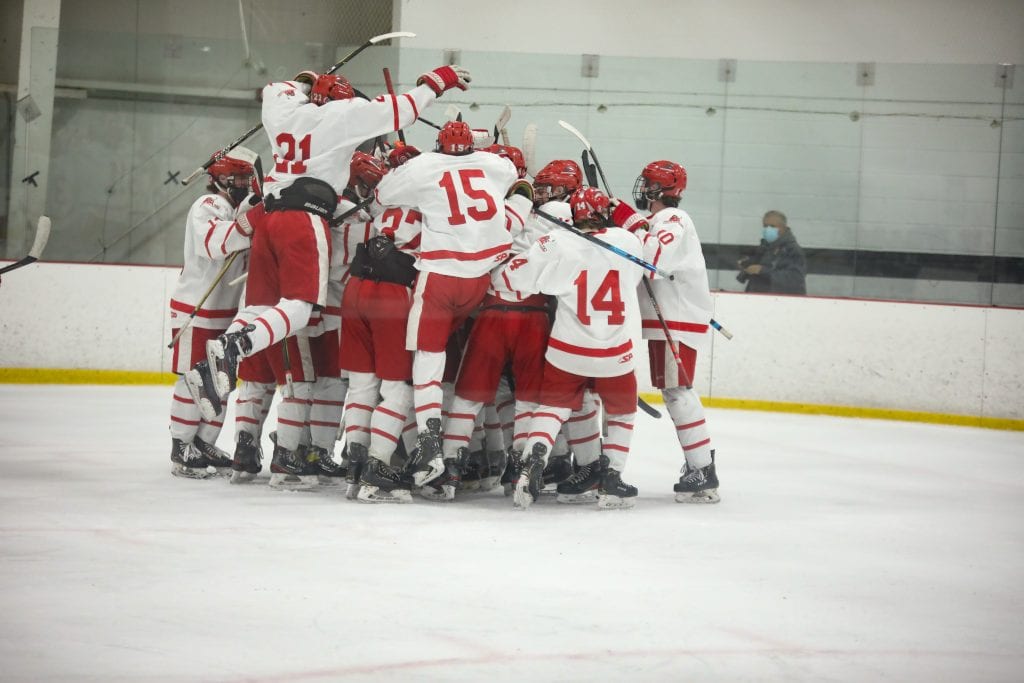 Hingham is moving on to the semis.