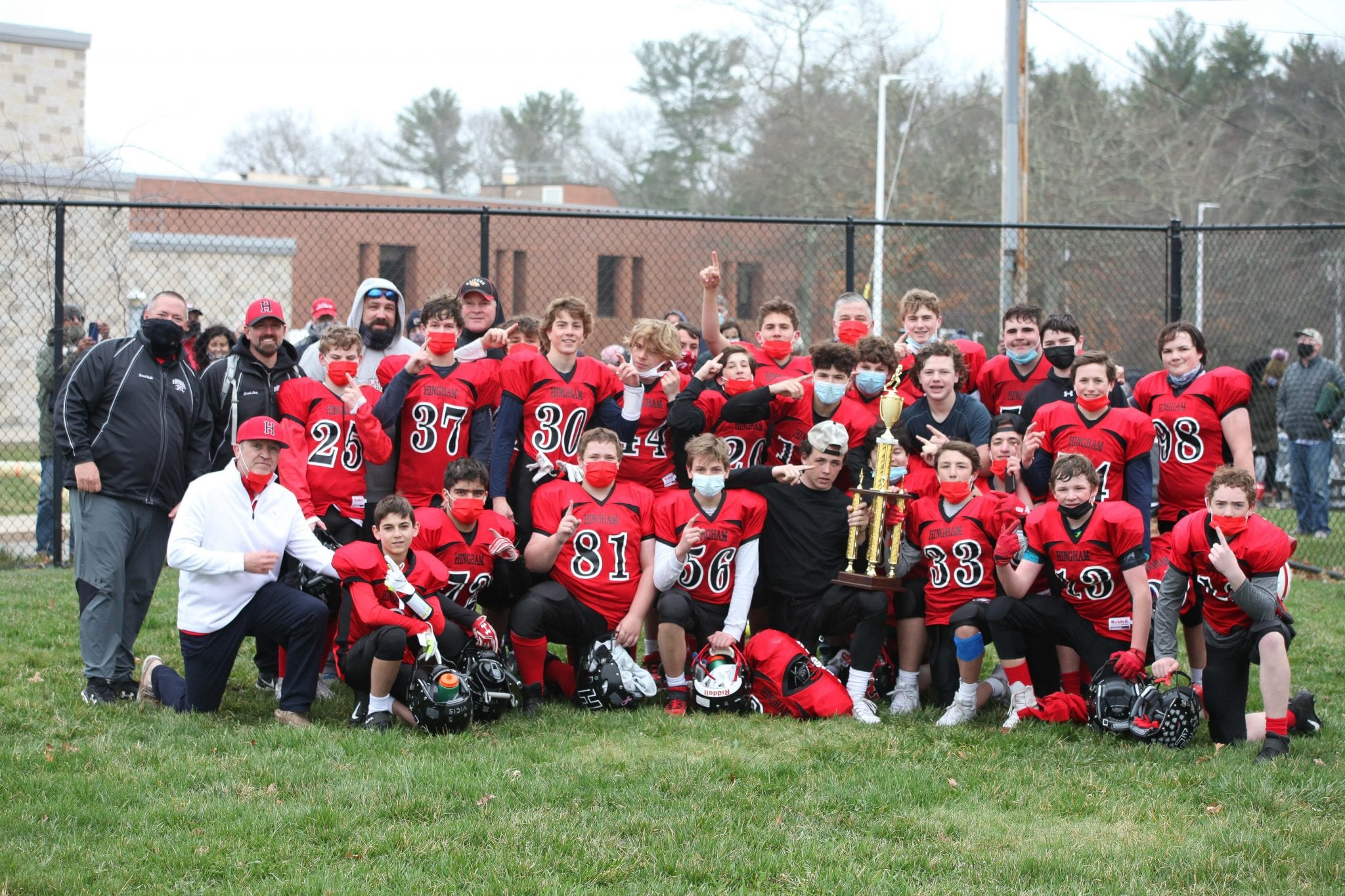 In early fall, Hingham Youth Football Head Coach Jeff Reilly thought his 15-year coaching career was over.  Certain Old Colony Youth Football League teams were putting together an abbreviated season, but the powers that be didn’t give the okay for Hingham to field a team.  Players and coaches alike were devastated, especially the 8th Grade squad.  Many of these kids and coaches have been playing together since second grade, and with some of them moving onto private school or just deciding not to play at the high school level, they thought they missed their chance at one more go around.

However, with the situation improving in the state and new guidelines issued around youth sports, the opportunity presented itself for the Hingham Raiders to play one more time. The league, and town, approved a second shortened season for those teams (8th grade only) who didn’t get a chance to play in the fall.  This gave Coach Reilly and his boys one more shot at glory.

The season consisted of four regular-season games (typically six) and potentially two playoff games.  The Raiders finished the season 3-1, only losing to undefeated Pembroke two weeks ago.  The boys won their first playoff game last week vs. Hanover, setting up the rematch vs. Pembroke for the Super Bowl title on Sunday.

The game wasn’t close.  Hingham came out firing and never gave Pembroke a chance.  A quick score in the first and another one at the beginning of the second gave the Raiders a 16-0 lead, which increased to 22-0 by half time.  Hingham’s defense was stifling, not allowing any big passing plays (which killed them in their first meeting) and barely allowing any gains on the ground.  Andy Ross, Teddy Reilly, and Brendan Crouch were all over the field, making big tackles for little or no gain.

On the other side of the ball, they mixed it up with running and passing plays.  Drew St. Pierre (110 yds, one TD), Mason Lennon (two 2-point conversion), and John Stenberg (40 yds) ran the ball with ease behind the outstanding play by the offensive line, especially big men Owen Cline and Brian Magner.  Ryan St. Croix (100 yds, two TDs) and Alex Levy (30yds, TD) were on the receiving end of pinpoint throws by QB Jake Varholak (5-7, 160 yds, three TDs, TD Rush).  Punter Matty Cummings pinned the Titans deep in their zone numerous times in the game.

“Only a few kids get to carry the ball and look like stars,” Reilly says, “but it really takes a whole team to win a football game, and that was apparent (on Sunday).  The work these kids did - our line, tremendous blocking, and our defense was dominant for us all year.”

The second half of the game was much of the same, only allowing a late Pembroke score in the final minutes.  The Raiders ran away with a 34-6 win, making them the OCYFL Division 1 Super Bowl Champs.

This rematch was a completely different game than the one played two weeks ago.  Varholak, who's been the starting QB on this team since 4th grade, says the diffence was everyone playing a complete game and minimizing their big plays.

"The offensive line blocked great. The defense was relentless," Varholak said. "After playing them the first time, I knew the big plays could be prevented and if we did that, we could win, and that's what we did."

“The boys stayed together through thick and thin and really finished their youth football careers on a great note,” added Reilly.

For five of the boys, it’s been a long journey together since that second-grade team.  This was the third Super Bowl appearance for Lennon, St. Croix, St. Pierre, Levy and Jacob Adams, having lost the previous two.  Coach Howie Levy, who has been coaching the boys for the past seven years, describes how important getting this last chapter in was to them.

“Seeing a core five kids that have been with the HYF program for seven years, falling short in two other Super Bowls appearances, finally feeling victory in their honorary HYF red jerseys makes me proud and happy,” Levy says.

“All these boys worked extremely hard in the weird pandemic shortened bridge season, which forced many practices inside,” Levy went on to say. “For most of the year, we weren’t even certain this team would play their final youth tackle football season, let alone a Super Bowl win.  It’s important to us coaches that each individual gets a taste of success.”

This year’s participation increased from around 16 players to 26, which increased the team's talent and versatility.  There were a few new faces that made an immediate impact on the field, which usually isn’t the norm given the high participation rate of sports in Hingham. The influx of players complimented the core group, including one of the originals Mason Lennon.  Lennon, an outstanding running back, also plays linebacker at an extremely high level.  In what’s been an extraordinarily difficult year for him, Lennon reflected on how much the season and Super Bowl meant to him and his teammates.

“Me and my teammates were all so excited to just get out there on the field no matter what happened,” Lennon says. “It felt like a dream come true.  Many of us have been waiting many years (for this moment).”

"I am super happy. I don't think we could have ended youth football any better," added Varholak. 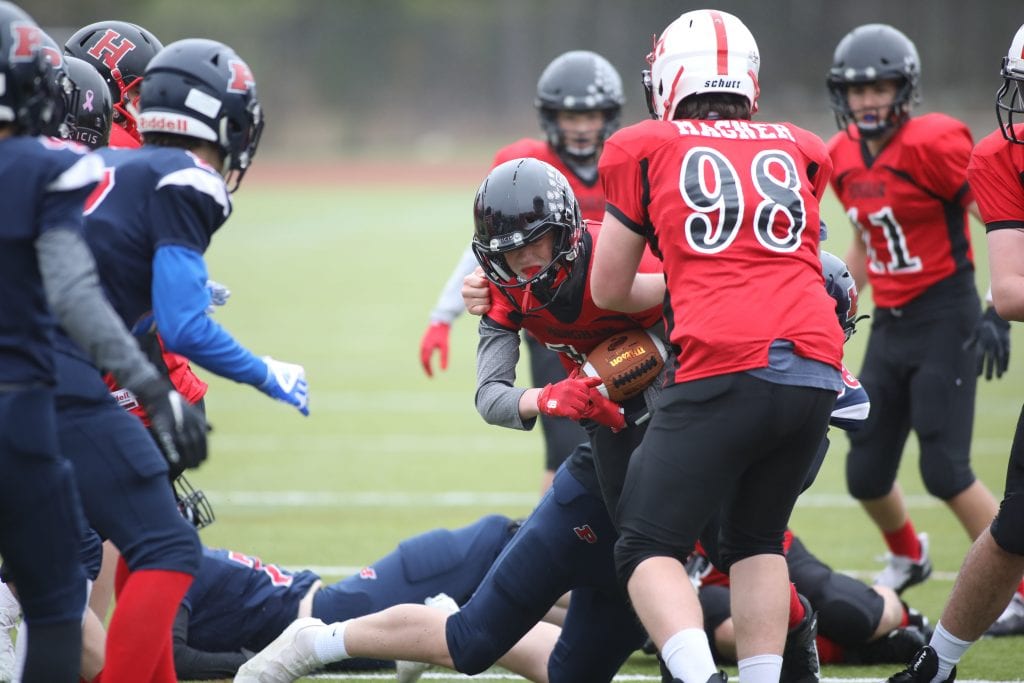 Ryan St. Croix runs up the middle for a few yards. 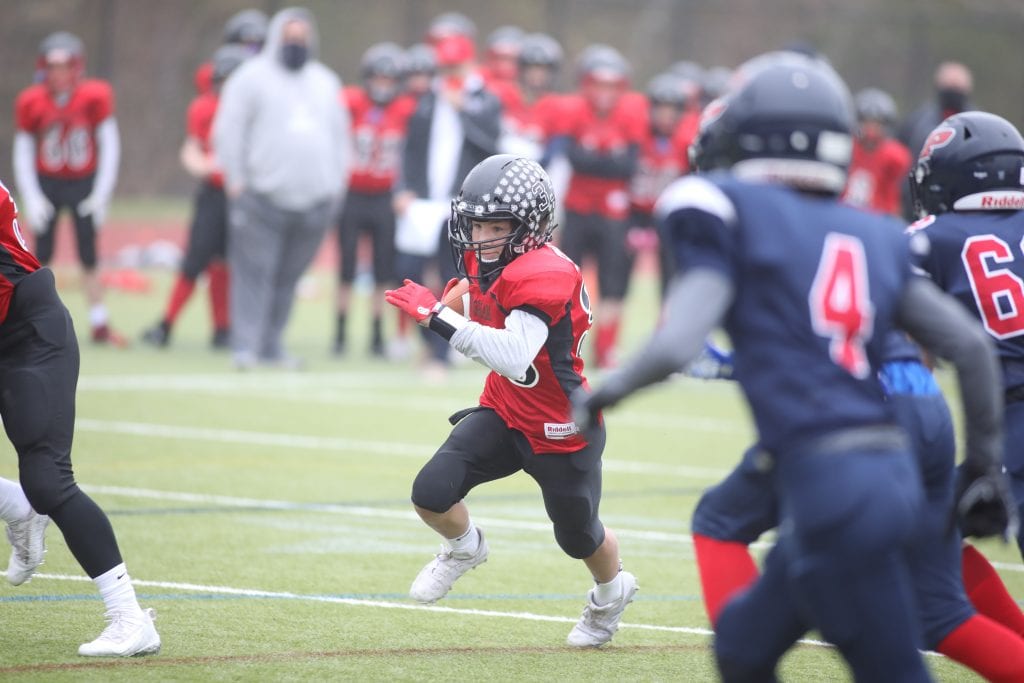 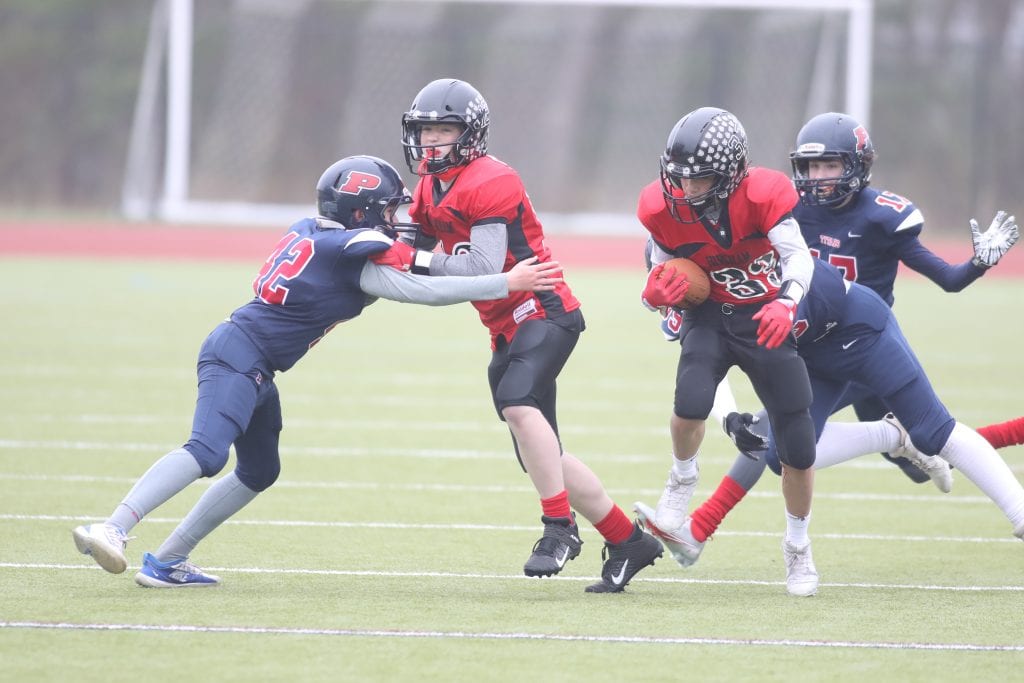 Mason Lennon cuts to the inside on a first quarter run. 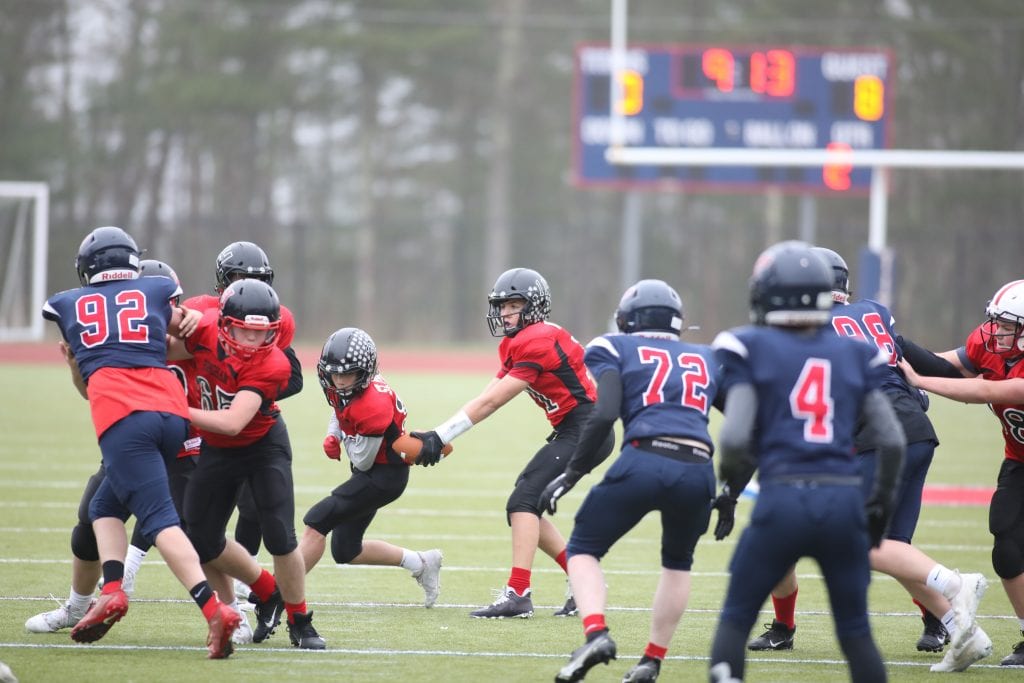 Jake Varholak with a play action pass in the second quarter. 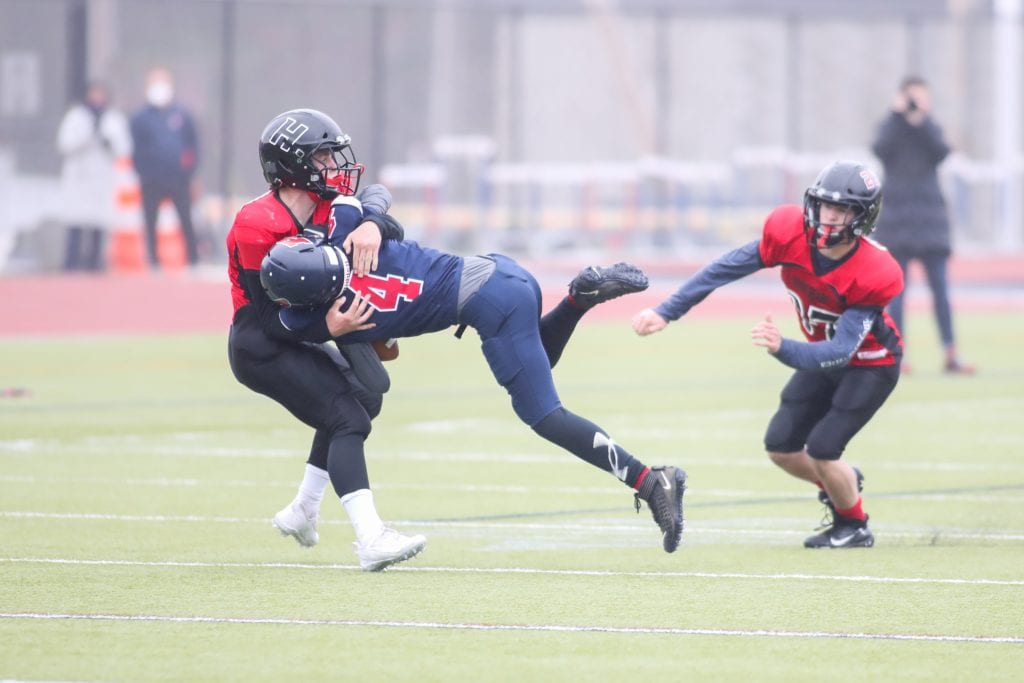 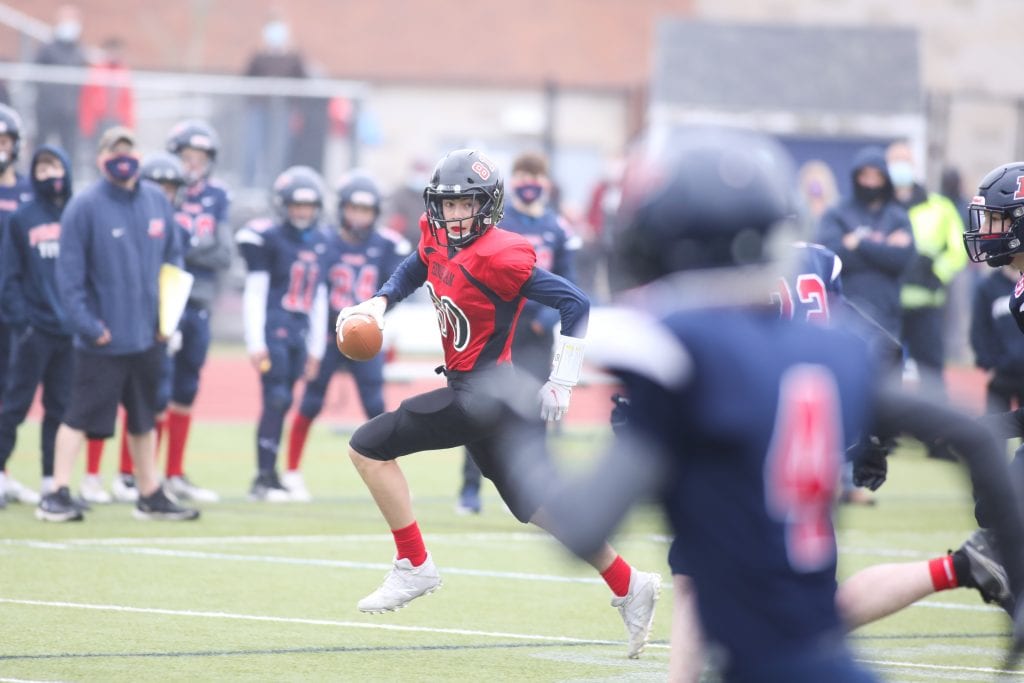 John Stenberg turns the corner for a big gain. 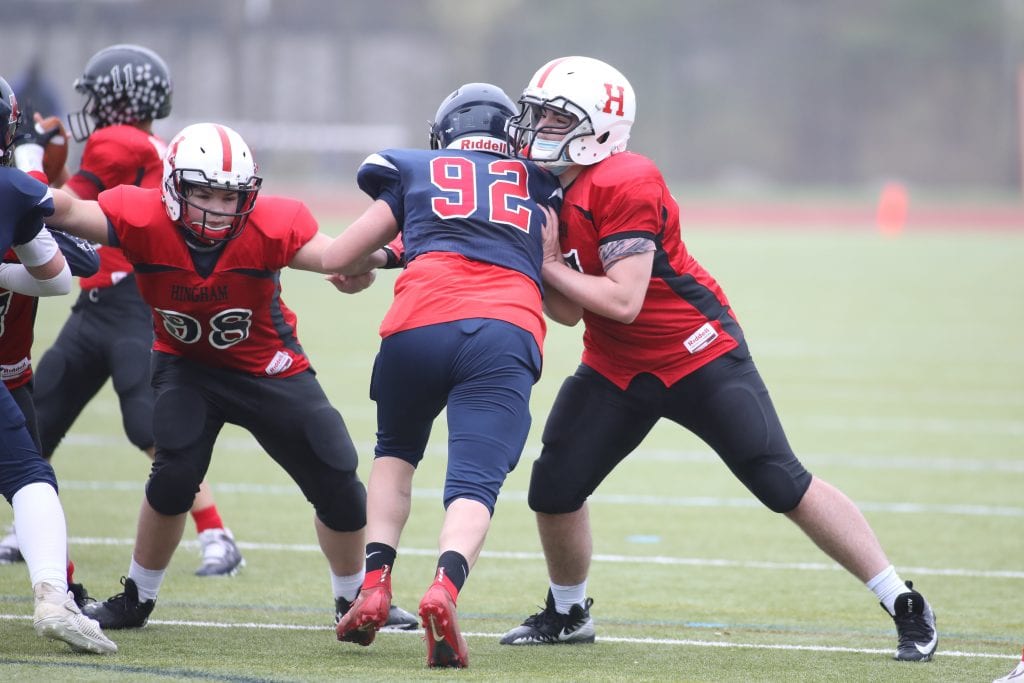 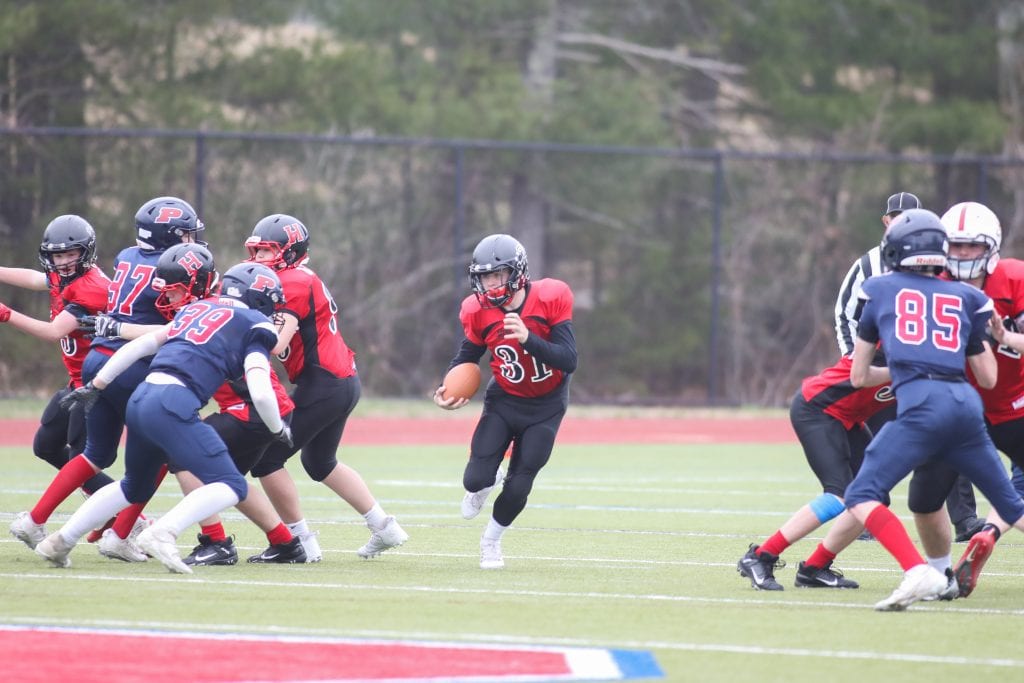 Mason Lennon with a huge hole to run through. 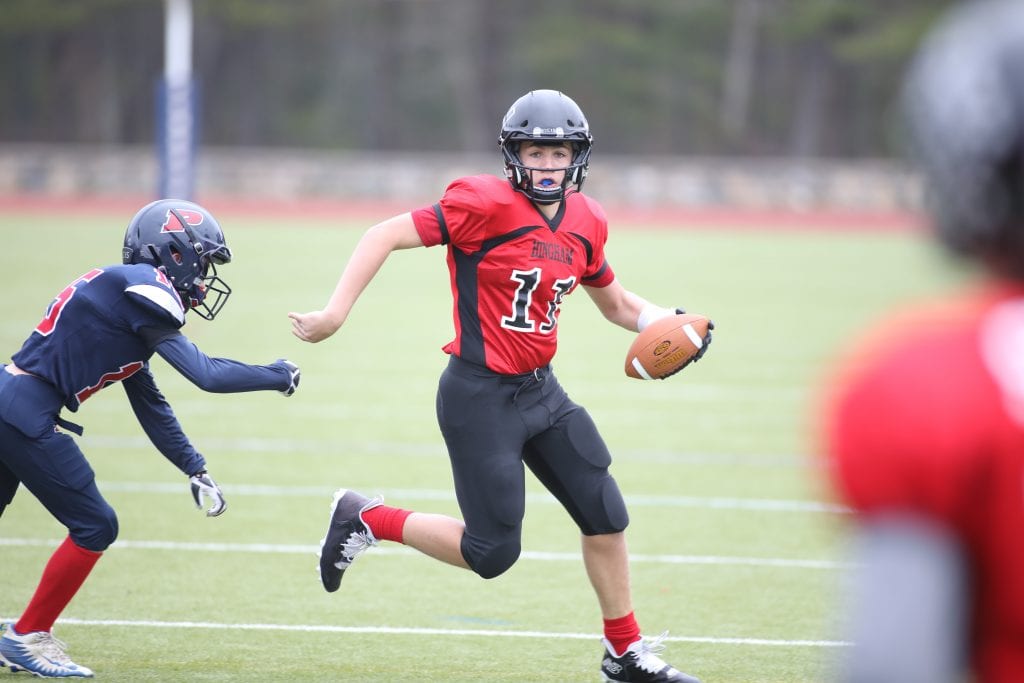 Jake Varholak scrambles away from defenders before completing a pass down field. 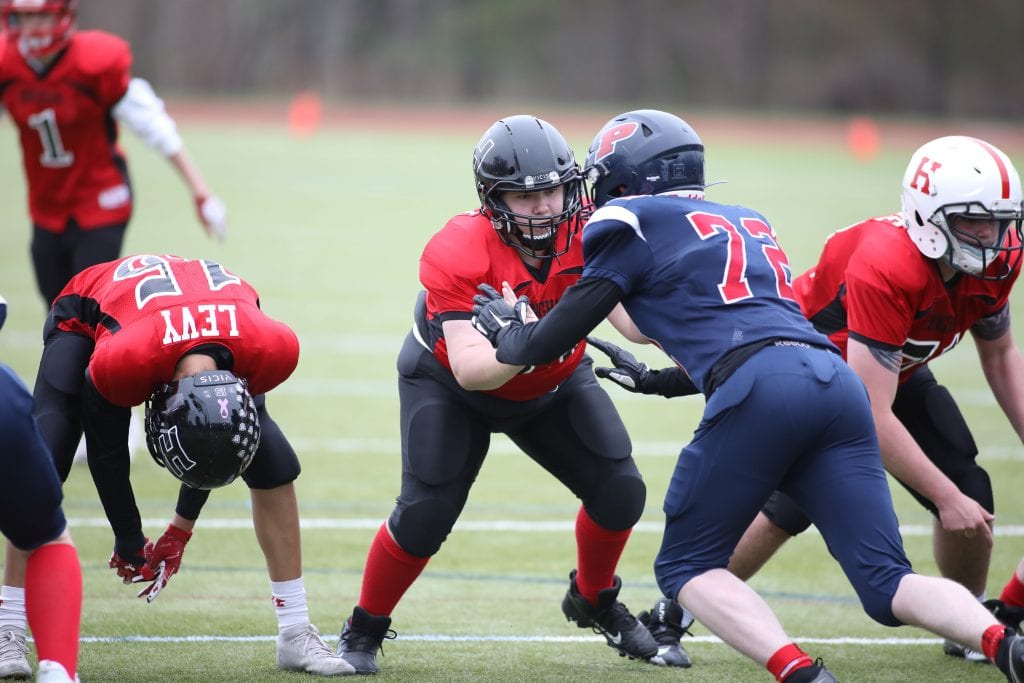 Matt Rulli jumps in to block on the line. 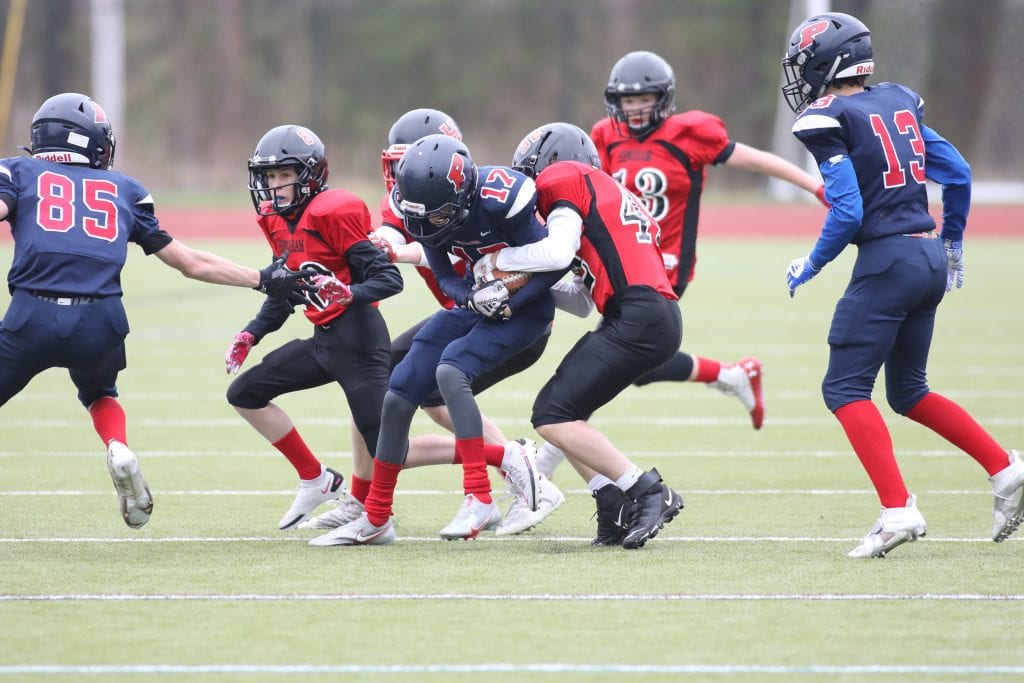 Noah Belkner trying to strip the ball on a kick off return. 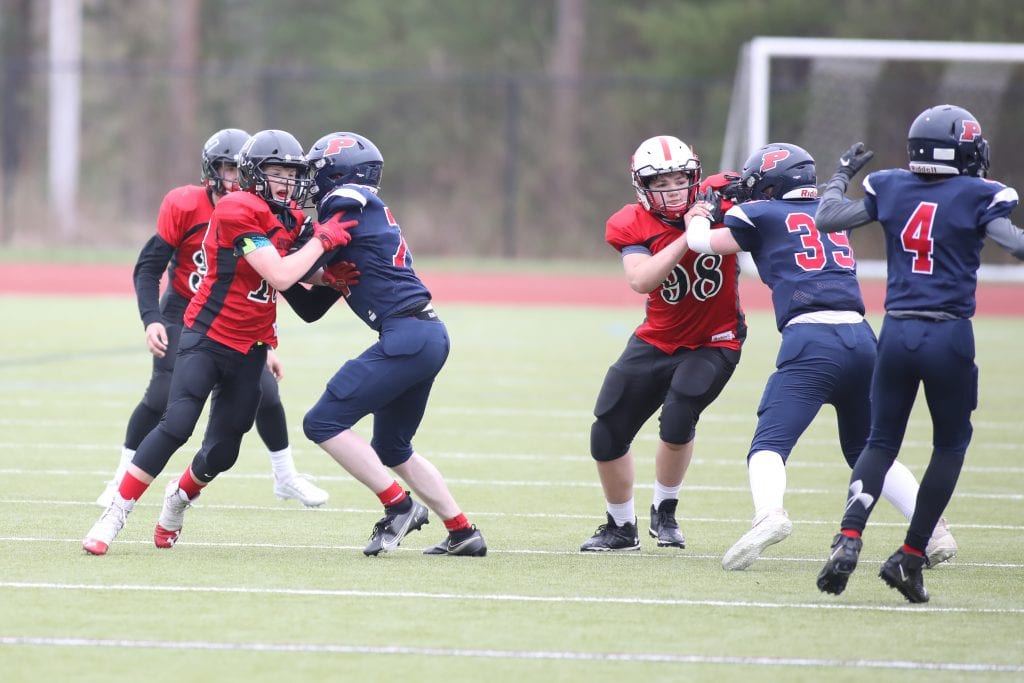 Matty Cummings coming off the edge to pressure the QB. 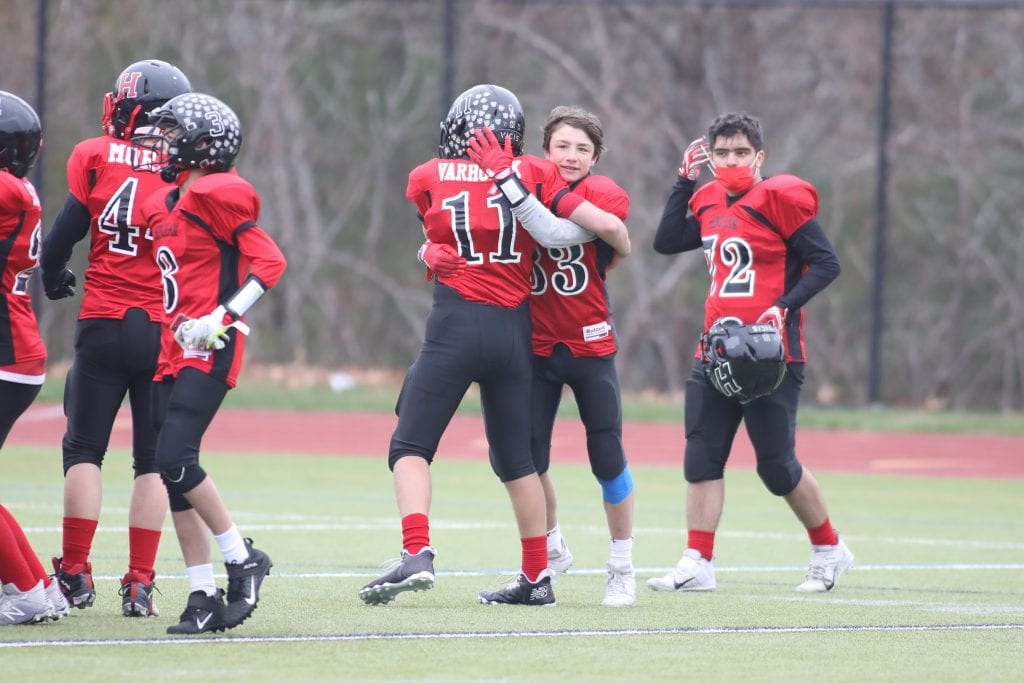 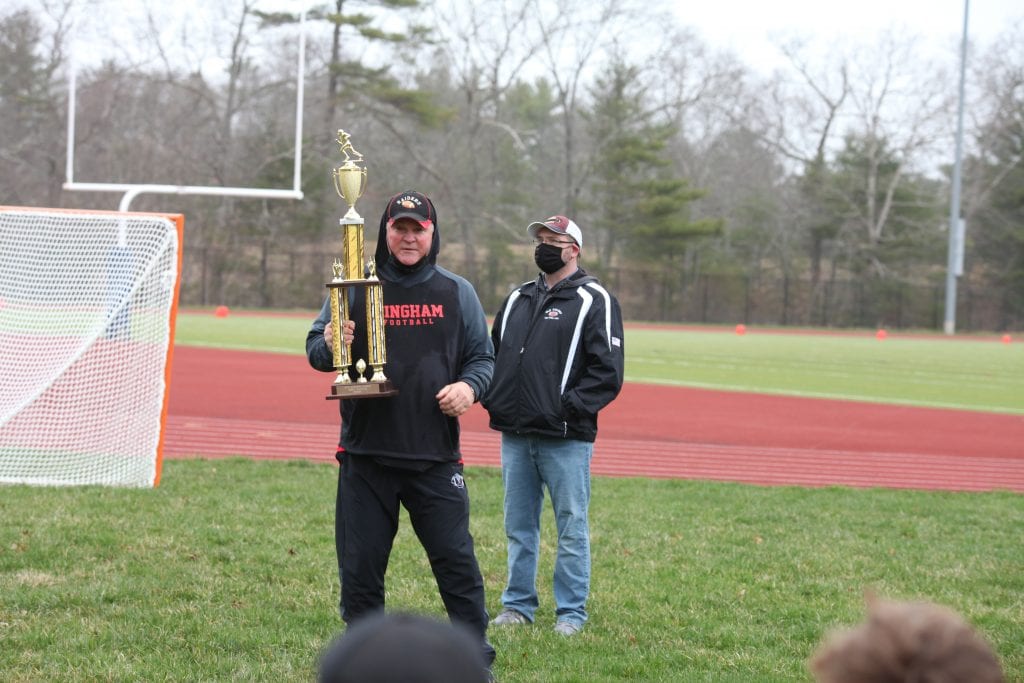 Congrats to Coach Jeff Reilly on 15 (and a half) seaons coaching HYF. 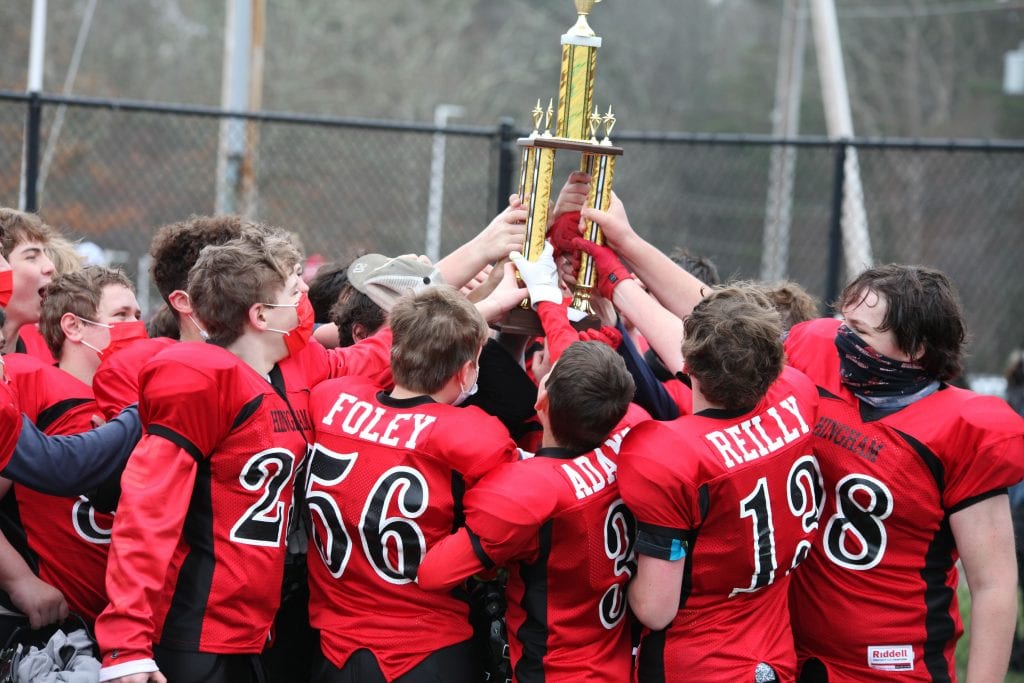