Business is booming for Hingham resident Christina Hartmann, whose "Secret Salt" seasoning is making a comeback through an unexpected Facebook connection that resulted in nearly 700 comments and hundreds of orders for this "amazing" blend, within a short time of the post.

"Secret Salt" is a preservative-free combination of kosher salt and seven herbs and spices used in place of salt on a variety of foods -- fish, meat, poultry, veggies, eggs, soup, roasted potatoes, and more -- which "adds a depth of flavor . . . and you don’t know why," Hartmann said. "As well, there is more than 100 times less sodium in a teaspoon of "Secret Salt" than there is in a teaspoon of regular table salt."

It's a fascinating story that began with a kind deed by a Hingham teenager when Hartmann and her grandson -- who was five at the time -- were fishing at Jacob's Pond in Norwell a couple of years ago. 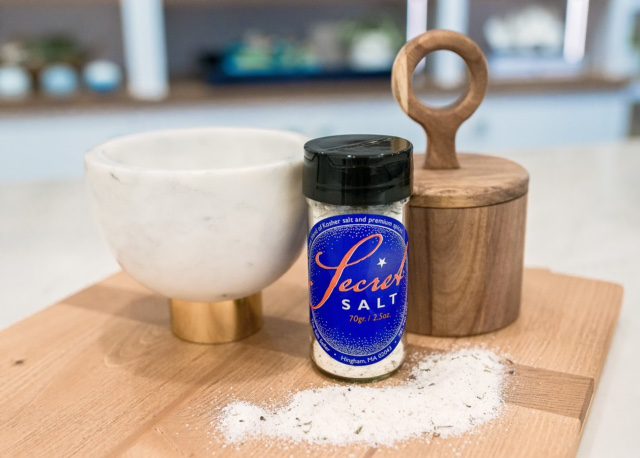 After successfully landing a gigantic fish on the dock, neither knew what to do next with his surprise catch.

Ronan Kremer, who happened to be fishing nearby and heard their conversation, offered to help. "He not only got the fish off the hook, but helped us get the memorial photo shot," Hartmann told the Hingham Anchor. “My grandson wanted to take it home for dinner. I told him that we are ‘catch and release,’, yet through that we discovered that Ronan liked to cook!”

As a thank-you, Hartmann and her grandson dropped off a jar of her "Secret Salt" seasoning to Ronan at Mullaney’s Fish Market in Cohasset where Ronan had told her he worked. Hartmann had supplied the seasoning to a local Hingham market for a time and direct to other customers, donated jars to charity events, and gave jars of it as gifts to family and friends.

Ronan, his brother, Liam, and his mother -- Plymouth River School teacher Kara Casey-Kremer -- enjoyed using the seasoning regularly until it was nearly gone. After trying to reach out unsuccessfully to Hartmann by calling the phone number on the label, they set aside their remaining "Secret Salt" for a special occasion.

Then Casey-Kremer had the idea to post a photo of the jar and a message on Facebook, asking if anyone recognized the label and knew the source of "Secret Salt." 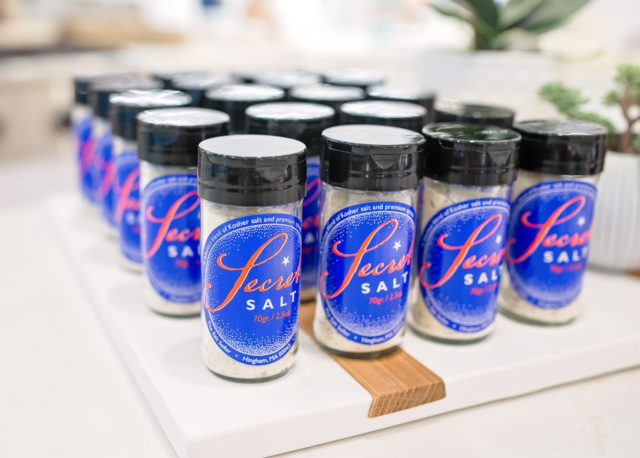 As it turns out, a friend of Hartmann's son saw the post and sent him a screenshot. He in turn mentioned it to his mother and provided her with Casey-Kremer's contact information.

"I got in touch with Kara and she ordered some more. Then the post went viral," Hartmann said. "Within four days, I received orders for 500 jars!"

Casey-Kremer calls this special seasoning "magic. It really brings out the flavor without overloading it with spices. It's good for quick meals for our family with our different schedules." They particularly enjoy a sprinkling of "Secret Salt" on shrimp, burgers, and salad.

The "Secret Salt" recipe was created by a family member who was a French-trained chef. "I standardized the recipe, started giving it as gifts more than 20 years ago, and got it trademarked," she recalled. "People would say they wanted some more of my 'secret salt,' so that's what I named it."

Now, with this unexpected relaunch of her "Secret Salt" business -- along with working full-time in the financial services field -- Hartmann is working hard to fill all the orders, with many already completed.

"This is gratifying and wonderful," she said. "I'm delighted, amazed, and overwhelmed, and I hope everyone loves 'Secret Salt' as much as my family has for 30 years."

Each order is packaged in a brown paper bag with royal blue tissue paper and hung on a doorknob if the person they're delivering to isn't home. Her grandson enjoys helping with the deliveries. "Maintaining the quality is the number one priority," Hartmann said. Among her first customers was the Casey-Kremer family.

"We're so happy to have a new batch. As soon as we knew more was on the way, we used the last of what we had on eggs the next morning," Casey-Kremer said. "Our supply should last us awhile, and now we know where to get it! I also bought a few jars for gifts."

She is "thrilled" for Hartmann. "It's exciting to see Christina revitalize her business, doing something she loves to do -- and all as the result of a quick post on Facebook. I really just expected to possibly hear back from someone who had a jar of 'Secret Salt' sitting on a shelf!"

Hartmann intends to donate a healthy percentage of the proceeds from the sale of "Secret Salt" to a food charity but isn't sure yet which one it will be.

A "Secret Salt" website is in the works. In the meantime, those interested in placing an order can message Hartmann through the Hingham Hub Facebook page.