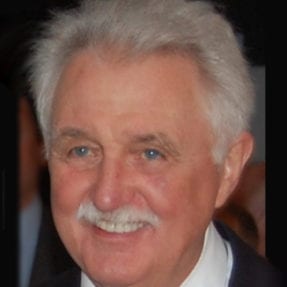 Richard J. O’Brien (Dick), formerly of East Boston and Hingham, died peacefully, surrounded by his family after a lengthy illness. He was just short of his 86th birthday.

Dick grew up in Orient Heights, East Boston with his loving Mother Edith O’Brien, Brother Tom O’Brien and grandparents Theresa and John Graham. Upon graduation from High School, he met and married Rita Harnett and moved to the Crow Point area of Hingham MA. There, they raised eight children. He was a loving father and husband.

Dick had a long and successful career at Massachusetts General Hospital working as a buyer, purchasing agent, Director of Purchasing and finally the Director of Corporate Contracts. He retired after a career of 40+ years.

Upon his retirement, Dick was able to pursue his lifelong interest in local history. He was a great historian of Boston and used his knowledge of the city he loved by volunteering at the Boston Public Library. There, he worked through bins of unknown documents and pictures, identifying historical landmarks and papers to help put them in historical context. He was also passionate about his family genealogy, tracing back long-lost relatives from Italy, Scotland, Ireland and Canada.

Dick was predeceased by his wife Rita and is survived by his devoted wife of 11 years, Judith Mullane O’Brien. He is also survived by his eight children and their families: Rick and Jeannie O’Brien of Martinsburg, WV, Therese Leary of East Boston, MA, Rita and Mark Atkins of Raleigh, NC, John and Flo O’Brien of Canton, MA, Tom O’Brien of East Boston, MA, James and Cheryl O’Brien of Marshfield, MA, Edith and Kelly Henry of Lakeway, TX, and Robert O’Brien and his fiancé Kelly McGown of Columbia, KY,  21 grandchildren, 20 great-grandchildren and Judy Mullane O’Brien’s five children and their families, including 4 step-grandchildren.

In lieu of flowers, the family requests that you make a donation in Dick’s name to the Lewy Body Dementia Association or to the Allerton House in Weymouth, MA.

Visiting hours will be held at the Pyne Keohane Funeral Home 21 Emerald St, Hingham MA on Sunday June 6th from 4-7 PM. A funeral Mass will be held the following day at 11 AM at St. Paul’s Church, 147 North St., Hingham. To share a special memory or give you condolences, please click the link above.