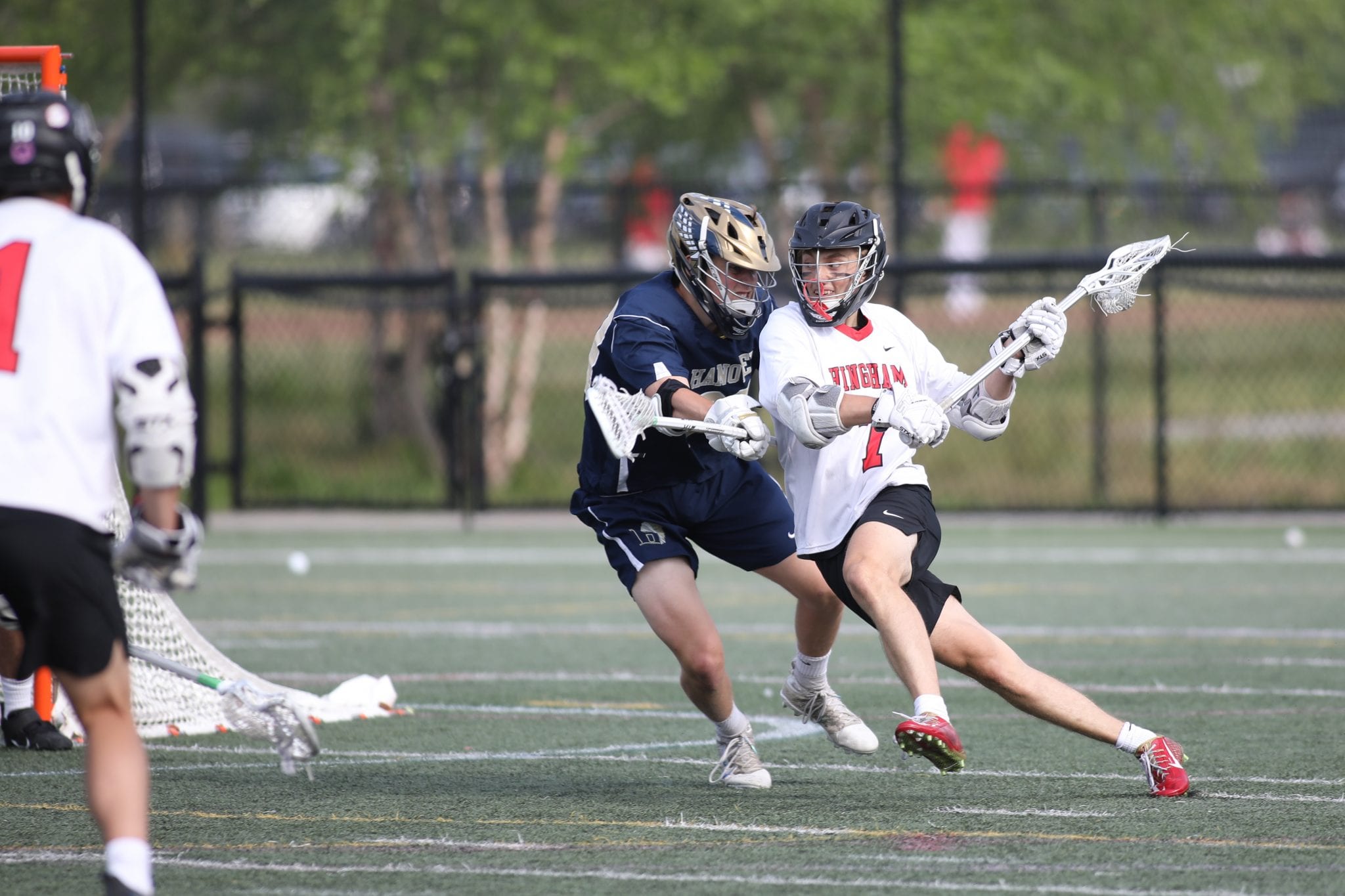 Senior Lars Osterberg opens the scoring in the first quarter.

After capturing the top seed in the Keenan Division of the Patriot League Boys Lacrosse tournament, the Harbormen were matched up against the second seed Hanover Hawks. Hingham had the home-field advantage, and it certainly came in handy as a large, unmasked group of students arrived to cheer on their friends and classmates. The game was postponed over 45 minutes while the teams waited for the referees to arrive, but both sides were raring to go by the first faceoff.

Despite Hingham losing every single faceoff in the first quarter, they took a commanding lead against Hanover. Owen Hoffman started the Harbormen two minutes into the game, deking the defender and firing off a shot that ricocheted off the crossbar. However, soon after this opportunity, Lars Osterberg scored the first goal of the game. Hanover quickly answered after the faceoff win, and one minute later Hingham scored off a Hanover turnover.

On the next possession, Hingham’s Charlie Crean was called for a push, giving Hanover a man-up penalty. Hanover cashed in on the opportunity one minute later and tied it back up. Hingham then took advantage of the quarter, with Charlie Crean making up for his mistake, and later Hoffman and Packard connecting for a give-and-go goal. Hingham ended the quarter up 4-2 and continued their momentum in the second quarter.

Hoffman scored almost immediately with his snipe finding the back of the net just 30 seconds into the second quarter. The junior was on fire tonight when he scored another just three minutes later on a man advantage for Hingham. Hanover momentarily broke Hingham’s four-goal streak, but Henry Crean and Cian Nicholas responded to make it 8-3 by the end of the first half.

Hingham then matched nearly every Hanover goal in the second half to maintain the lead and pull out the win. Senior Paul Forbes scored two in the third quarter, while goalie Sam Bellomy stayed resilient in net. The senior saved four shots in the first quarter and ten opportunities through the whole game. The boys came out on top 13-9 when the final buzzer sounded. “Overall we played very well, we’re still a work in progress to some extent but a lot of guys stepped up,” commented the team’s management on today’s performance. However, the team needs to care for the ball, “If we don’t make dumb mistakes with the ball that they don’t force us to make, then we’re going to have a ton more opportunities to capitalize on.”

The Harbormen play Cohasset this afternoon in a non-playoff make up game from earlier in the season.  The boys are back at it for the Patriot Cup Championship next Thursday against a team TBD. Click here for more information regarding Hingham’s boys' lacrosse team. 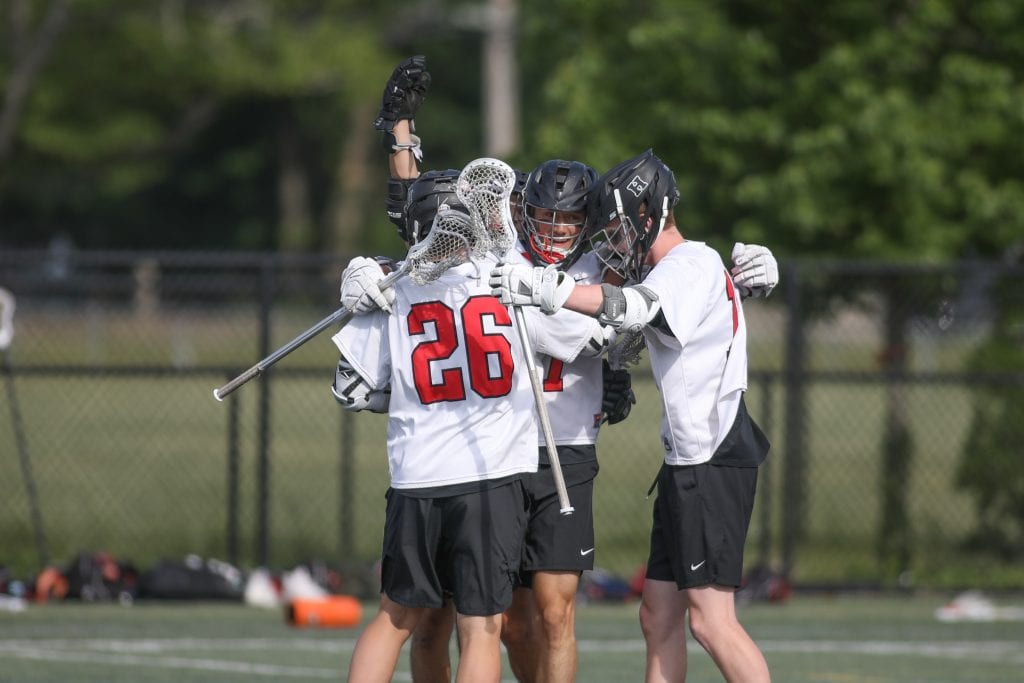 Senior Lars Osterberg celebrates his goal with his teammates. 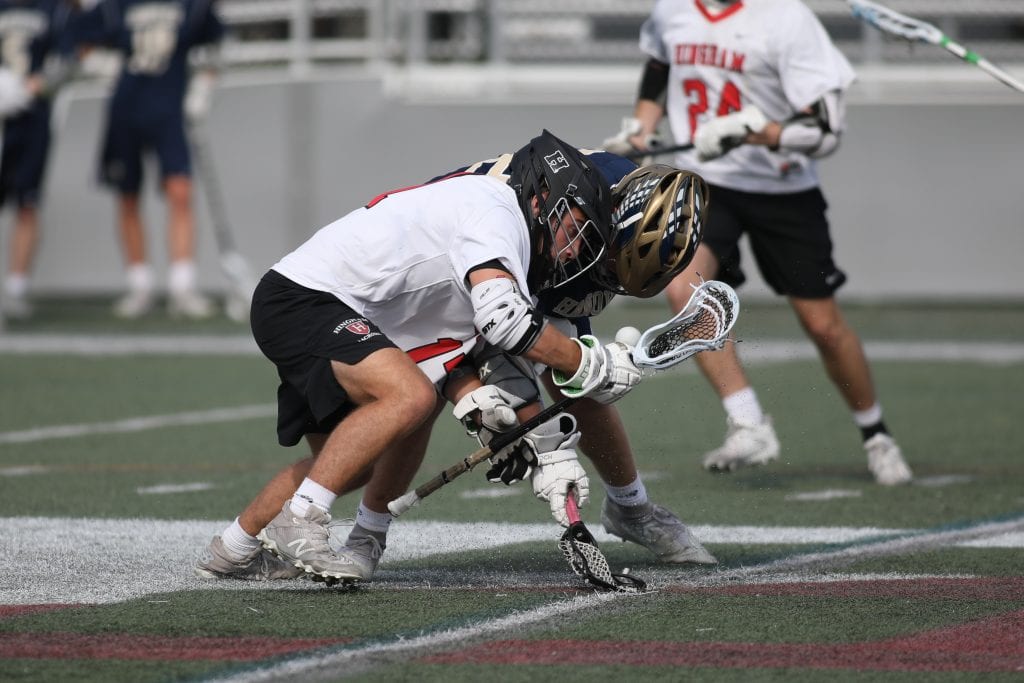 Junior Luke St. Pierre battles for a face-off win in the first quarter. 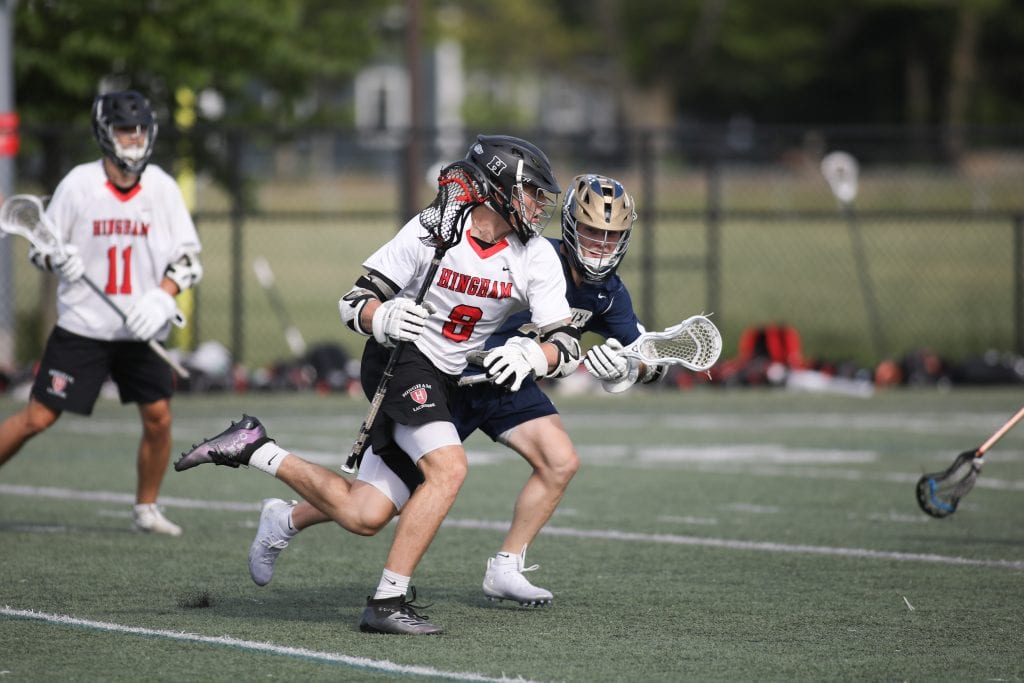 Junior Connor Hartman gets around a Hanover defender. 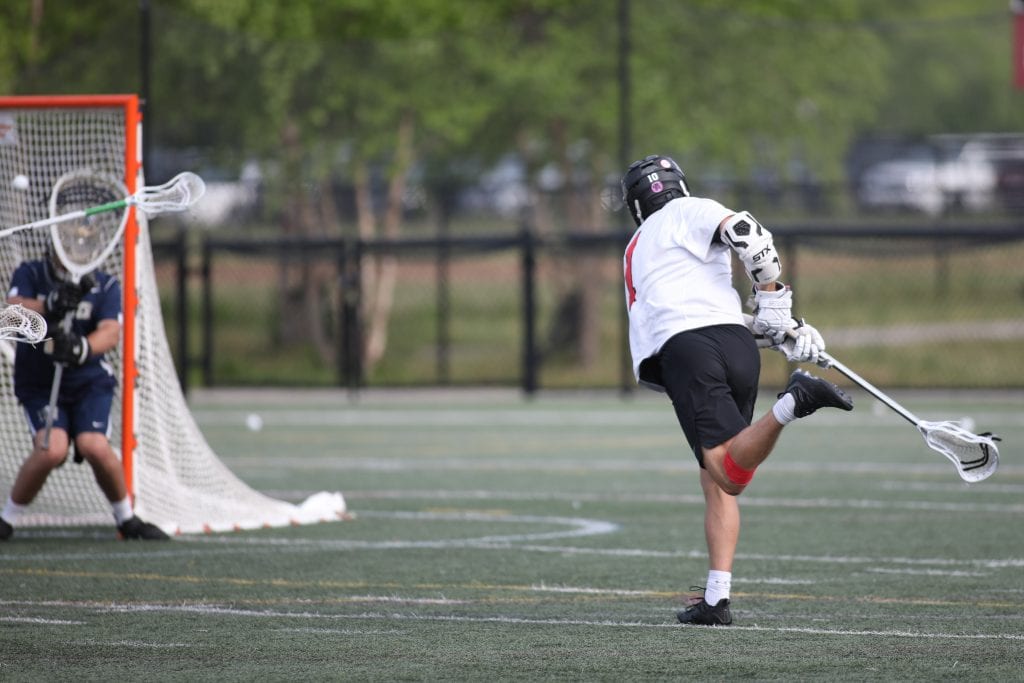 Senior captain Charlie Crean puts one in over the goalie's right shoulder. 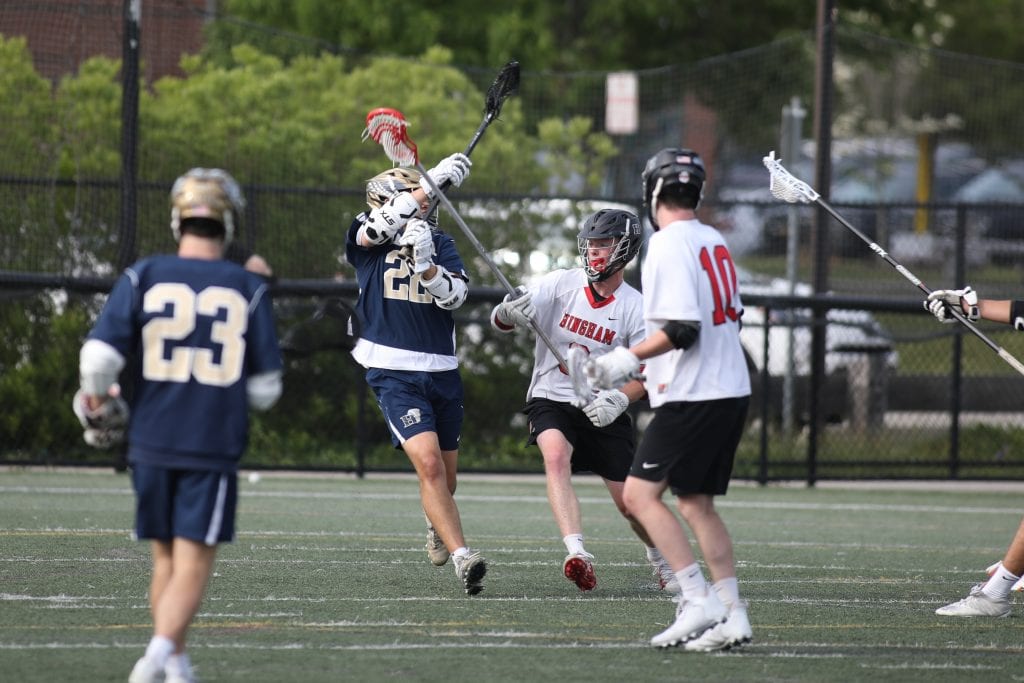 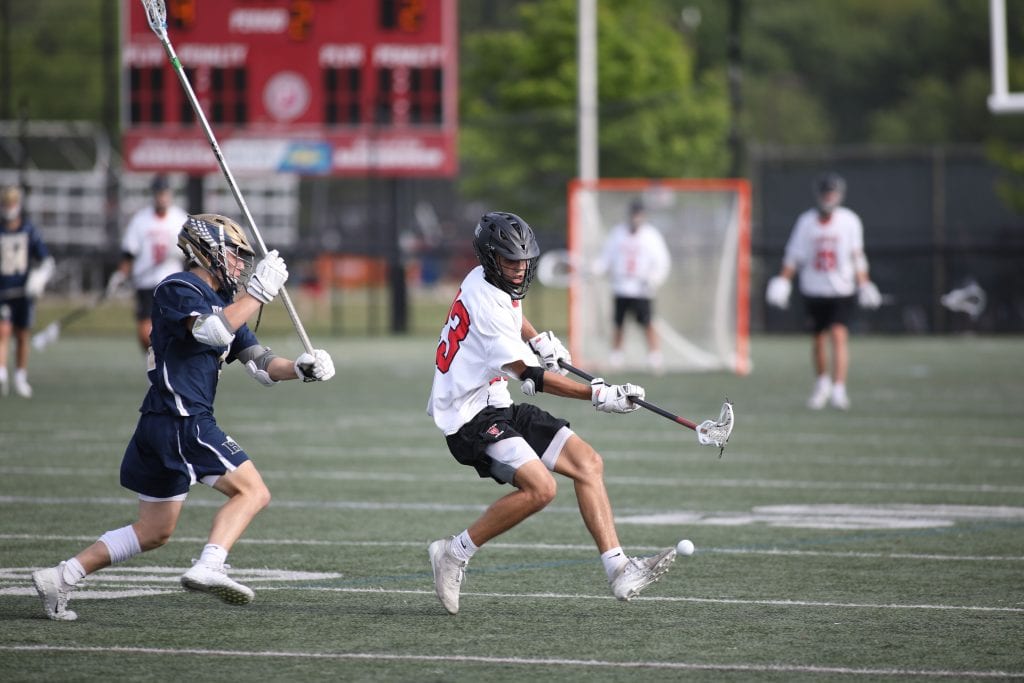 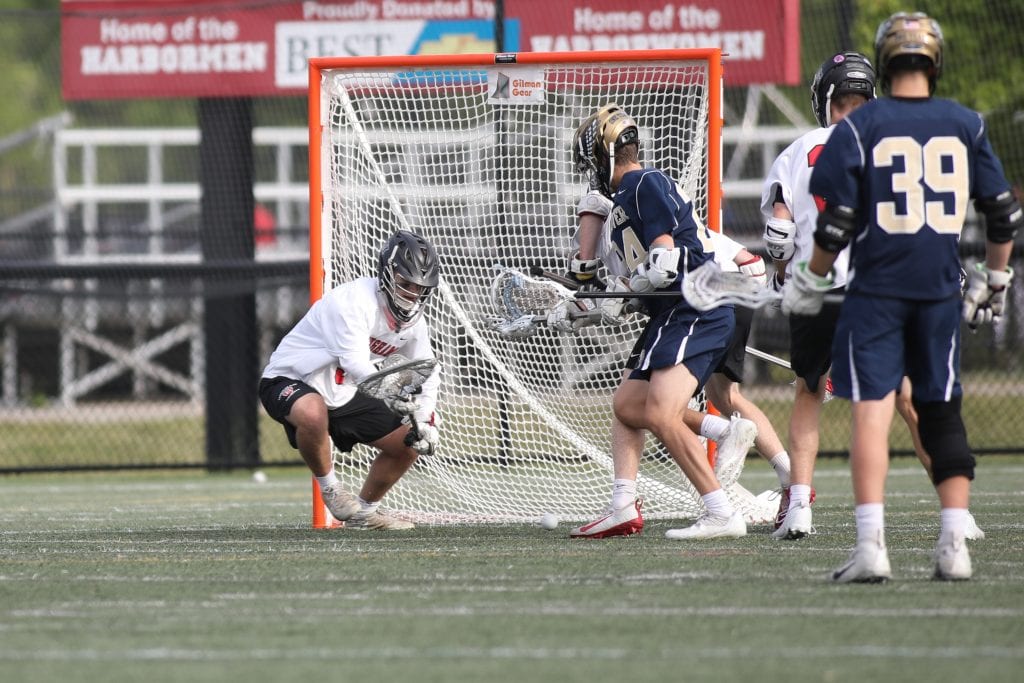 Senior captain Sam Bellomy quickly covers up a ball in front of his net. 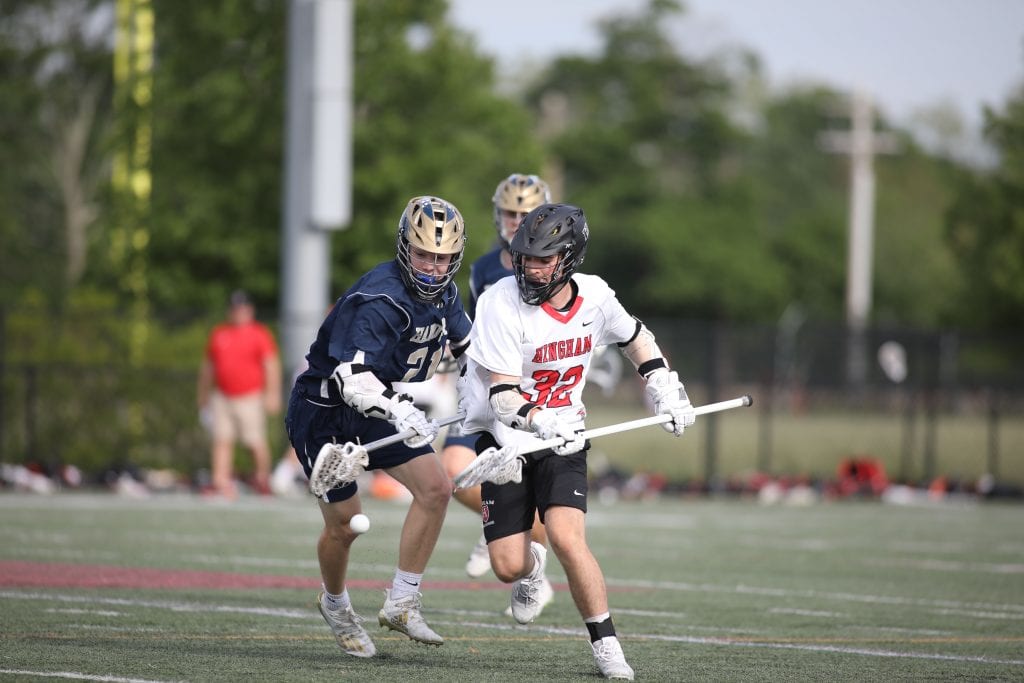 Sophomore Ben Rakauskas fights for a loose ball at midfield. 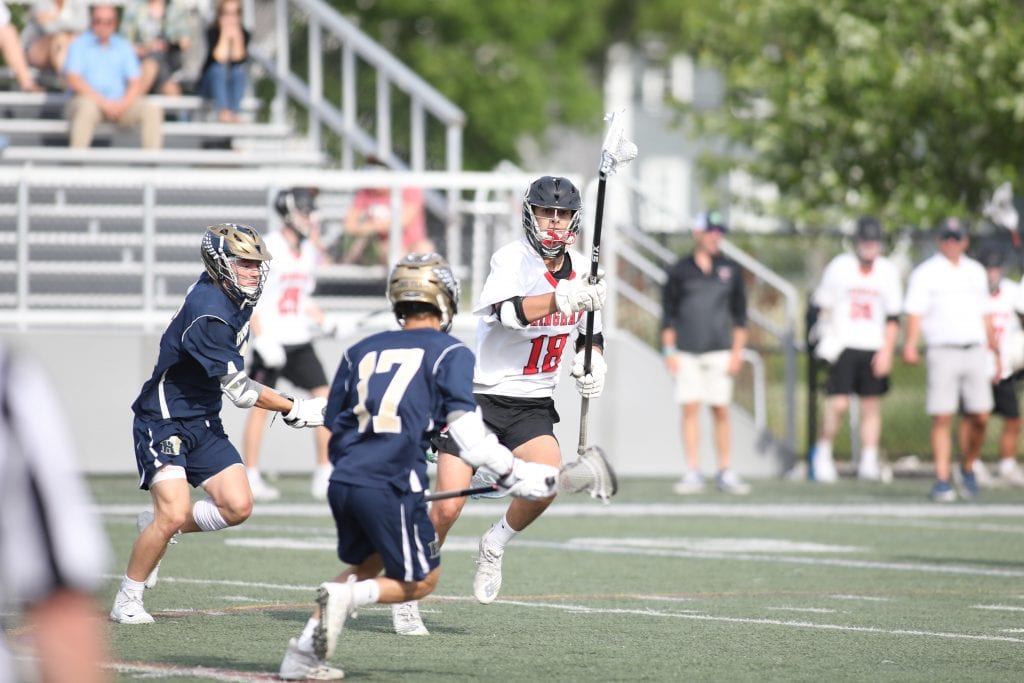 Sophomore Eddie Rochte looks to pass it out of his own end. 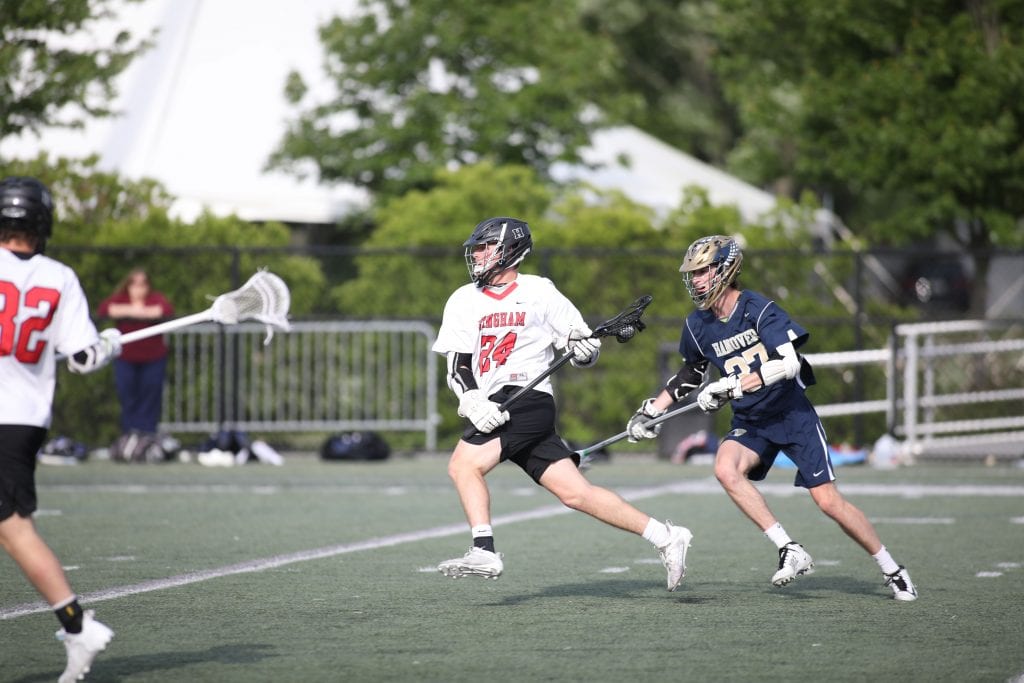 Senior Alex Rabschnuk gets past a defender before getting shot off. 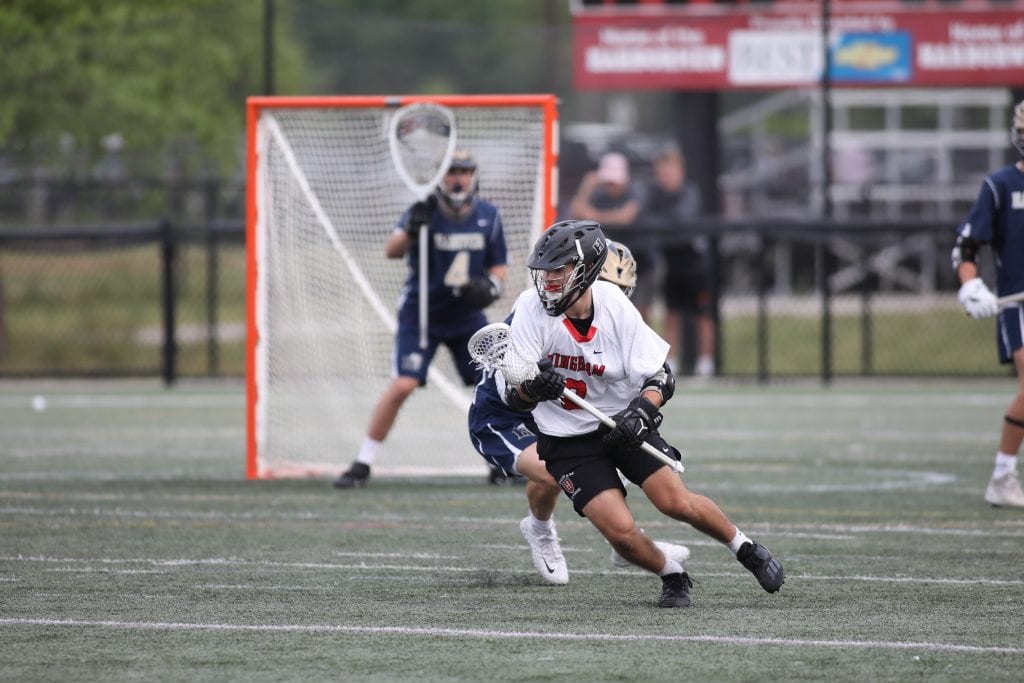 Junior Cian Nicholas fights off the defender before scoring. 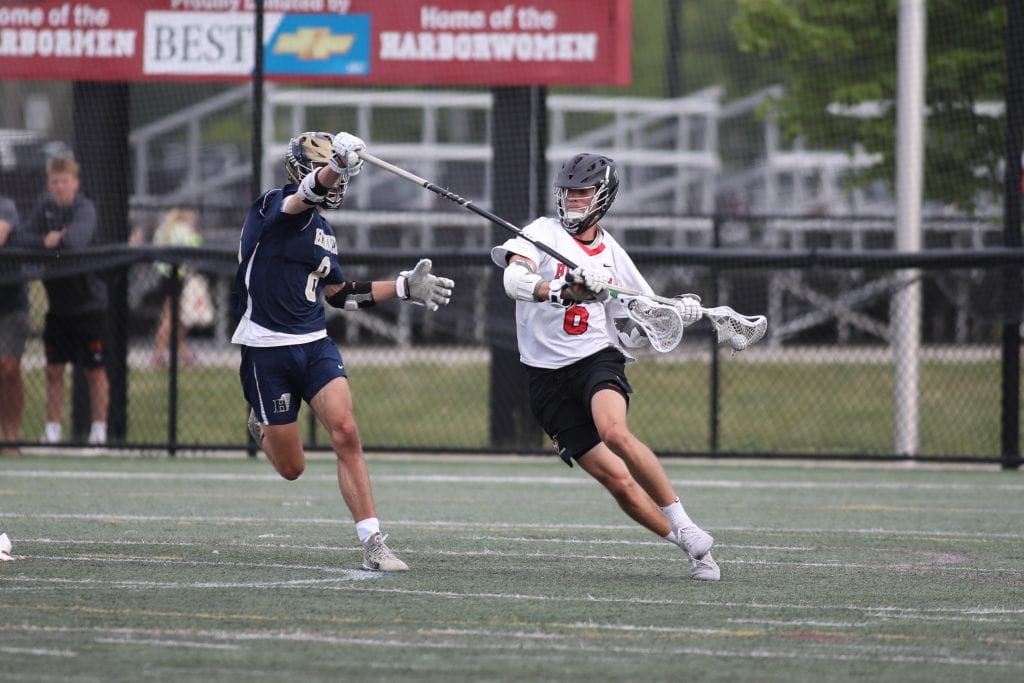 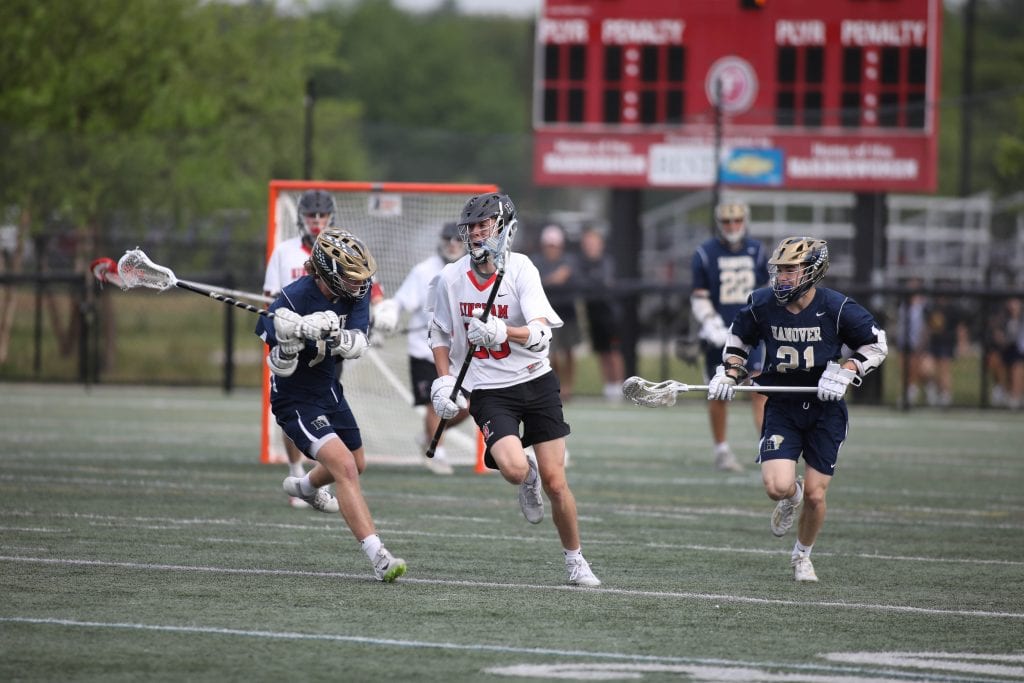 Junior Nick Johannes picks up a loose ball and takes it the full lenght of the field to score. 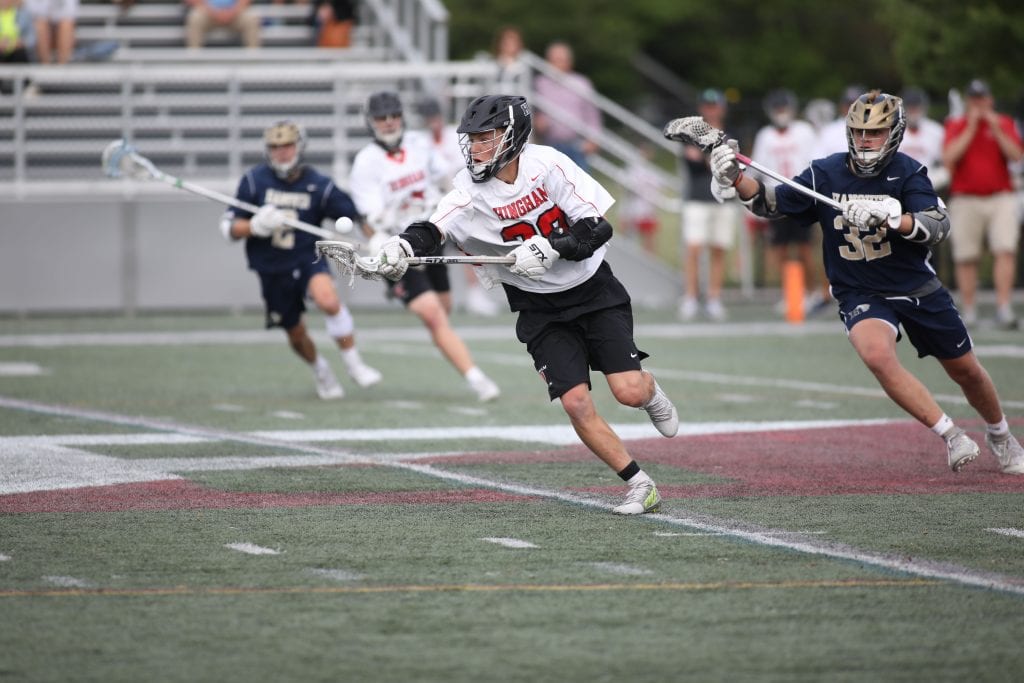 Sophomore Gus Belsher scoops up a ball off the faceoff. 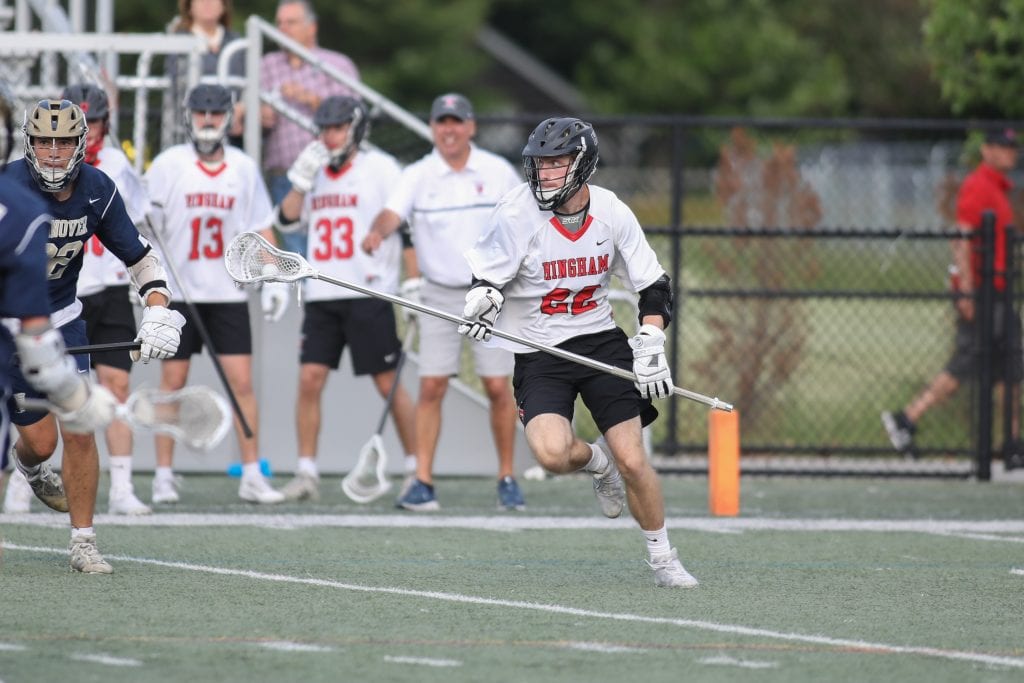 Senior Cooper Estes carries the ball late in the game as Hingham secures the win.