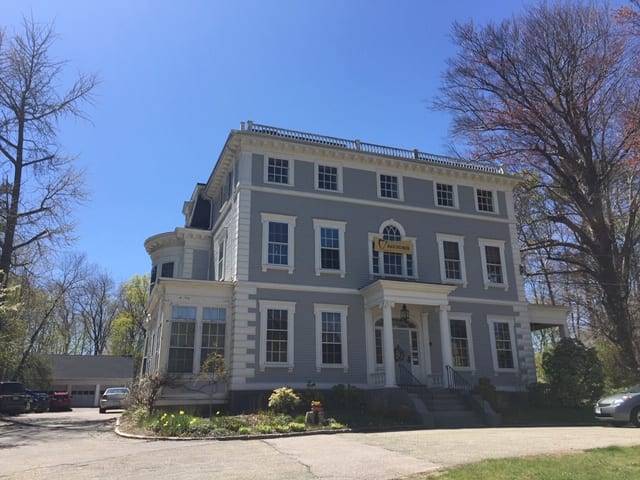 While the Old Ship Church board of trustees recently signed a purchase and sale agreement with Atlantic Development for the Parish House across the street from the meetinghouse, the details have not yet been finalized.

When the Hingham Anchor asked Atlantic Development President DJ MacKinnon, a Hingham resident, to share his plans for the three-acre parcel, he had this to say:

"The short story is that we don't have a plan for reuse of the property yet. We really want to embark on a process with the town boards -- including the planning board and the historical commission -- along with neighbors and other interested parties to come up with a plan or alternative proposals to discuss that would [ultimately] evolve into a plan that will work."

The historical commission would review any proposed changes to the exterior that would be visible from the public way because the Parish House is located in an historic district.

"The primary goal is to be able to build a new Parish House next to the existing meetinghouse that would be more suited to their needs," MacKinnon said, noting that there was a building at that location in the 1800s that is no longer there. The proceeds from the sale of the current Parish House would pay for the proposed new one.

Negotiations with the Hingham Affordable Housing Trust are happening on a parallel track. Part of the overall proposal is to sell a small portion of the land to the Trust for an expansion of the Lincoln School Apartments senior housing. There is currently a long waiting list.

"This is a good opportunity to help create additional affordable housing for seniors in the downtown area," MacKinnon said, and he will continue to work with the Trust in the hopes of making that possible.

"We're in the early stages of pulling it all together," he said. "In the meantime there will be people on the property doing a survey -- probably in the next month or so -- and we will be reaching out to start a dialogue. We want to take the time to really hear from everyone who is interested in the proposal."

According to Historical Commission Administrator Andrea Young, the commission received a project notification from the Massachusetts Historical Commission stating that an archaeological study would be done on the property surrounding the historic Old Ship Church because part of that land is the proposed site for a new parish house.

"I have lived down the street from Old Ship Church and the Parish House for almost 30 years," MacKinnon said. "I'm a neighbor and also want to see the right thing happen there."

As background, at a special parish meeting on Oct. 13,  members of Old Ship Church gathered remotely to vote on two articles: to allow the board of trustees to negotiate with Atlantic Development for the sale of the land and Parish House at 107 Main St. and to allow the board to negotiate with Hingham’s Affordable Housing Trust for the sale of a portion of the property.