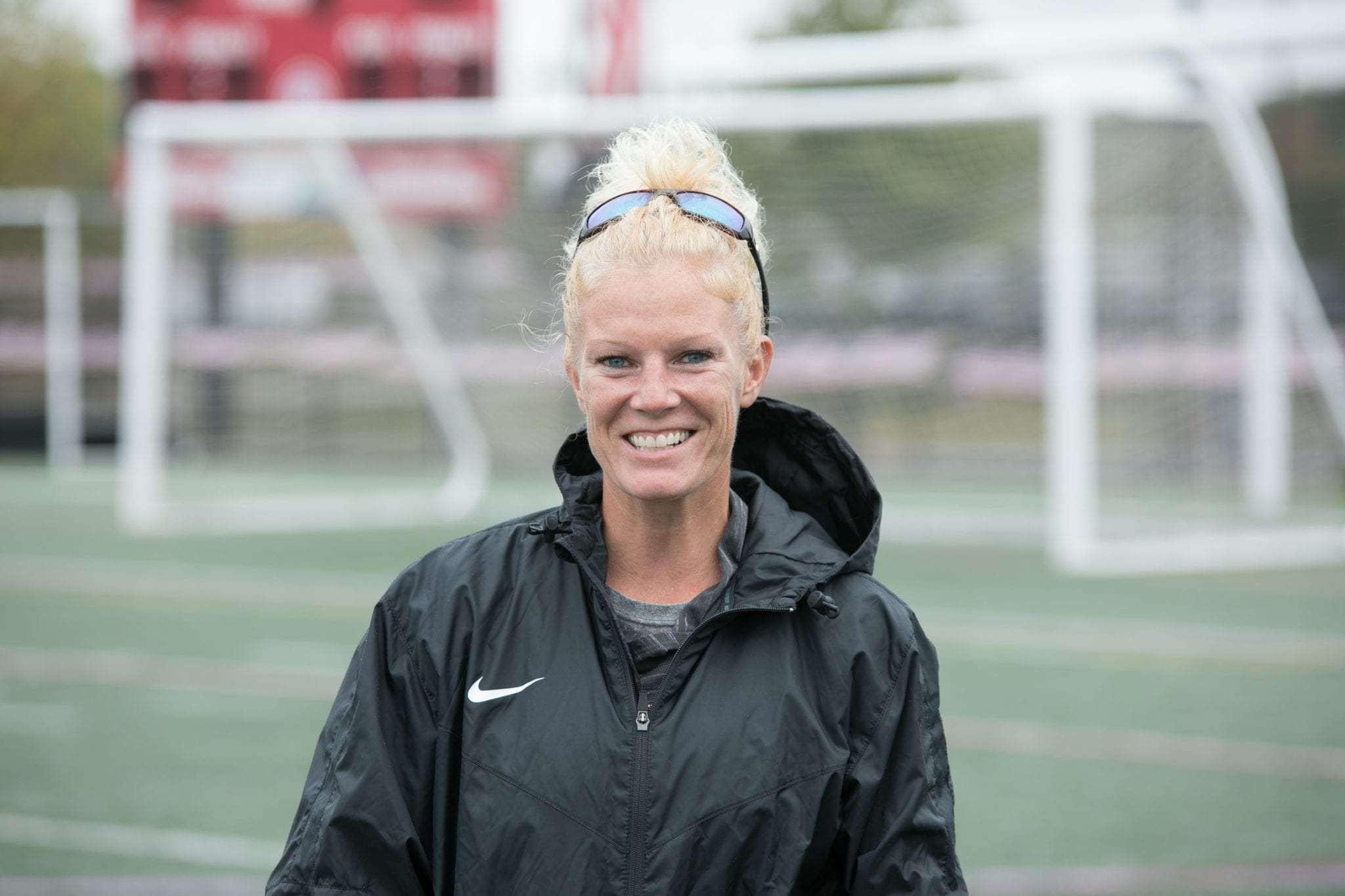 Sarah Dacey is currently the head coach of HHS girls soccer and recently started Next Level Athletic Advising with her wife Mary-Francis.

There’s something to be said for being in the right place at the right time. As was the case for current Hingham High School girls soccer coach Sarah Dacey.  Just around the time her wife Mary-Frances Monroe accepted a new job as the Commissioner of the Development Player League (DPL), a new opportunity opened up at HHS. Dacey reached out to Athletic Director Jim Quatromoni stating her interest in the job.  With her long list of qualifications, she was offered the job as new head coach of the HHS girls soccer team.

“Once that was secure, we realized it was the perfect opportunity to move home, and we couldn’t be happier that we did,” Dacey tells the Anchor. “We would always spend our summers in Humarock Beach in Marshfield. Ever since our daughter Sadie was born (who will be 3 in May), we have been wanting to move back home to be closer to family. We absolutely love being close to our family and friends and love living on the South Shore.”

Not only did Dacey and her family pack up from sunny Florida and move to a new town, but she also inherited a pretty successful soccer team who was coming off a recent state championship and doing so during a pandemic.  But the pressure and the pandemic didn’t phase her as the team captured the league’s best record and won the Patriot Cup in her first season. 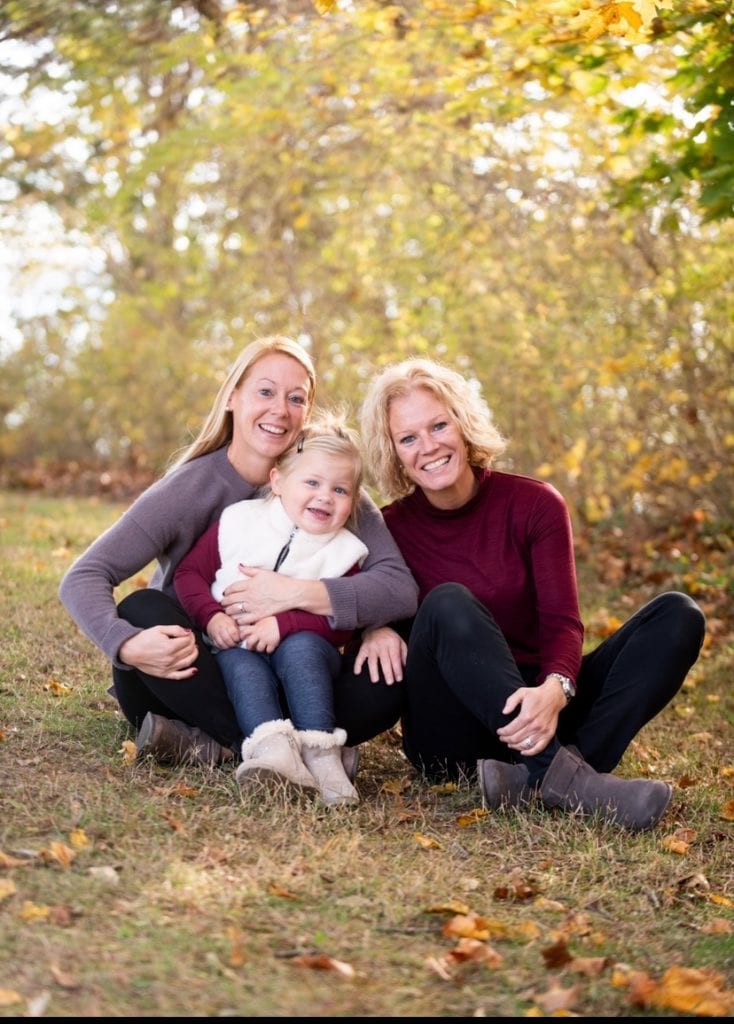 Having comfortably settled into New England living, Monroe and Dacey turned their attention to their next endeavor helping guide high school student-athletes through the college recruiting process.  Realizing they could turn something they have done for numerous families in the past into a successful business, they recently started Next Level Athletic Advising.

“With both of our backgrounds in college coaching, we really felt like we could do more to provide a service that is desperately needed,” explains Dacey.  “There are a lot of families who don't know where to start, and we are so excited to share our knowledge with them and help them along the way through the process.”

And what backgrounds they are.  Monroe played at UConn and UCLA and was a four-time NCAA College All-American.  She was a professional soccer player for both the Philadelphia Charge and Boston Breakers.  She has over 15 years of college coaching experience, including former head coach at University of Albany and most recently at the University of Miami.  Monroe is a former player on the U.S. National team and is currently a scout for the team.  Dacey’s background is just as impressive.  She was a three-time NCAA soccer champion at UNC, where she also played lacrosse reaching the Final Four twice and was named All-American twice.  Her coaching career includes head coaching jobs at Barry University where she was two-time Coach of the Year, and Babson College.  She was an assistant coach at BC, Providence College, and the University of Tennessee.  Dacey also played professional soccer for the Carolina Courage and Boston Breakers in the WUSA.

The company’s mission is to provide college recruiting services and guidance through the recruiting process.  Hingham and the surrounding towns on the South Shore send a high number of kids to play D1 or D3 sports each year.

“We work with clients to come up with an individual plan that best suits their athletic ability and academic goals. From there, we assist with highlight videos that best showcase our clients strengths.  As college coaches, we watched video all the time and we know what college coaches want to see when watching a highlight video. We work to make sure each clients video best represents them as a player. We also have a vast network of college coaches that we reach out to for feedback on players who may have interest in their school.  We work with soccer and lacrosse families right now, but there is potential to expand to other sports if there is interest.” 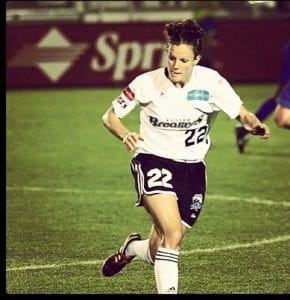 Monroe and Dacey are in a unique position having experienced both sides of the recruiting process.  They feel they can help students and parents in the crazy world of college sports.

“There are a lot of factors that go into making a college decision.  When you add the possibility of playing college athletics it can be overwhelming. High school athletes can benefit from our services because we can walk them through the initial steps of where to start, how to market yourself, what schools best suit their academic, athletic, and geographical interests, and how to communicate with college coaches and how often.  When it comes to the highlight video, it is a complimentary piece to the recruiting process. Watching their game film also helps us evaluate them as a player and gives us an idea of where to lead them in making their school choices.  Coaches use video to aid in their decision on whether or not that player can make an impact in their program.  It also helps coaches to decide whether or not they want to pursue that athlete by watching them play in person and follow their development as a player.”

Both say the initial reception to the business has been great and it shows that there is a need not only in the South Shore but all around the country.

“I can honestly say there haven't been many challenges,” says Dacey “but the surprises have been the number of people we are working with outside of Massachusetts. We are lucky to have a large network that has connected us through various avenues.  We are growing pretty quickly so that has been exciting. We are also just so happy helping people and building relationships with our clients.  It’s been incredibly rewarding.

In the short term, they both hope to help as many people locally as possible but admit they would like to continue to grow the business nationwide in the future.

For more information on Next Level Athletic Advising, check out there website here. 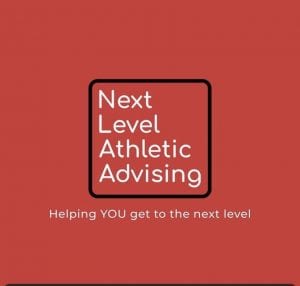