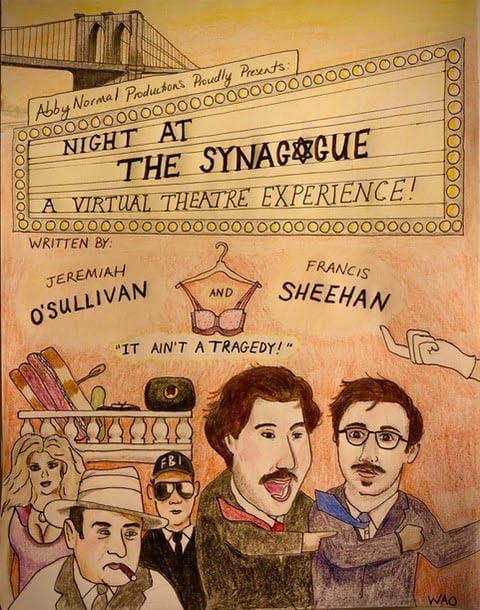 The poster for “Night at the Synagogue.”

After a Facebook network glitch prevented the live production last Friday of locally produced, Zoom-based comedy “A Night at the Synagogue,” a live presentation has been scheduled for this Saturday (Aug. 22) at 8 p.m. Sign-in information is available here.

The 15-member “Synagogue” cast—which includes three community-theater actors who have previously performed in Hingham—remains the same as was reported in the Anchor story last week.

“Night at the Synagogue,” an original stage comedy by two local playwrights, will have its world premiere Friday (Aug. 14) at 7 p.m. in a free, Zoom-based Facebook Live performance. The 15-member cast's “virtual” farce offers a computer-screen audience the chance to see some area actors—including three who've been featured in Hingham productions—appear in a new format.

Francis Sheehan, who co-wrote the play and stars in “Synagogue," played King Arthur in Hingham Civic’s 2013 production of “Spamalot.” Jack Capadonna, Curly in Hingham’s production of “Oklahoma!” In 2017, plays two roles, including Italian mobster Lucky Carsovito, in the new comedy. Set in the 1930s, “Synagogue” tells of two brothers—one of them Sheehan’s character Frank O'Malley—on the run from the mob. Along the way they're caught up in a scheme of love and eccentricity involving a wealthy New York family, and a bawdy theater.

This Hingham-based writer and local community-theater performer, who last played the butler in 2018’s “Annie,” reprises his household-servant performance as Windom in “Synagogue.” (I had been scheduled to appear this year in “Guys and Dolls” here in town, but the show was canceled because of the pandemic lockdown.) The Zoom format for this week’s play allows the actors—most of them with local roots—to appear from as far away as Los Angeles.

“Night at the Synagogue’s” writers, Norwood’s Sheehan and Jeremiah O’Sullivan, of Brockton, describe their play as “a love letter to the works of Mel Brooks, the Marx Brothers, and the classic comedy tradition of the 1930s and ‘40s.” It is, they say, “a story about discovering love, finding family, and the power of a good sandwich.” Add the playwrights: “We are so excited to be taking this step into a larger world. Watching these amazing actors from all across the country, breathing life into these characters who’ve been living in our heads for years, is one of the most rewarding and incredible things to see as artists.”

The two recently founded Abbynormal Productions as a performing arts organization to provide works for this new, online era in entertainment. “When the pandemic was just beginning, our company understood that there would be a deficit in the theater world,” say Sheehan and O’Sullivan. But they also saw a need “to try something that had never quite been done in this fashion: a new theater initiative, modeled off of the classic summer stock, but adhering to social distance guidelines.” Rehearsed and performed virtually, through the internet, “we have performed five of these types of shows, with our biggest one on the way,” in this latest comedy premiere.

Audiences for previous productions, including “Dracula” and Shakespeare’s “Midsummer Night’s Dream,” have ranged as high as 3,000 to 4,000 for one online performance. While viewing “Night at the Synagogue” is free, Abbynormal encourages audience members to donate to various charities in lieu of a ticket price. (Recommended charities include the ACLU, Red Cross and United Way.) The show also will be available on Facebook Live free through the weekend.

To see the premiere, viewers can locate the Abbynormal Productions page on Facebook, and follow the link to “ fight at the Synagogue" on Friday at 7 p.m. The link is https://www.facebook.com/Abbynormal-Productions-102772447764382. 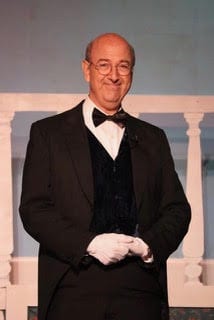