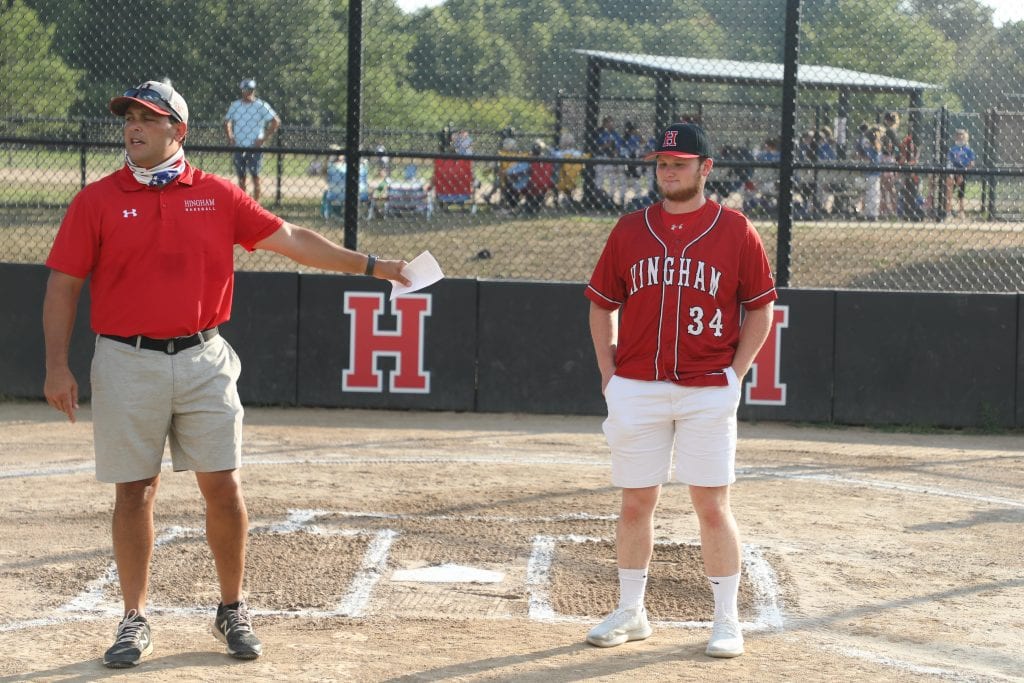 The Annual Hingham Little League (HLL)  Scholarship was presented Monday night to Winston Southworth before the start of the league's playoff schedule.  Southworth, who was accompanied by his parents Michelle and Wayne, and his Hingham High School (HHS) Coach Frank Niles, is a 2020 HHS graduate. He will be attending and playing baseball at Endicott College this fall.

"I honestly was very humbled to receive the HLL Scholarship," says Southworth.  "It's surreal being on Carlson (Field) again; the last time I was on that field our team won the Major League World Series."

He was a three-year starter on the HHS Varsity Baseball team and was Co-Captain of this year's team, which unfortunately didn't get to play their season.  However, he did get a chance to still play ball this summer.  He was selected to play for the Boston Prospects team, an elite baseball program designed to showcase the areas top players.

"I was looking forward to really just relaxing and playing some of my best baseball without the stress of recruiting," Southworth tells the Anchor. He goes on to say, "Playing for the Boston Prospects under Coach Rick Foresteire, Coach Tanguay, and Coach Thorbahn has been extremely competitive and rewarding. I have been lucky this year to play with and against many talented college baseball players. The players all support one another; it is a great group of guys."

In his presentation speech, HLL President John Cignetti had nothing but praise for Winston and his accomplishments.

"Winston has been a good example of leadership, also has good example as a teammate,  strong character, and has shown great sportsmanship."

At one point in high school, Southworth played three sports: football, basketball, and baseball.  But once he realized that he wanted to play baseball in college, he had to give up the other two sports. "I learned how important GPA was to play college baseball."

Southworth accepted his scholarship in front a group of 10, 11, and 12 year-old Little Leaguers.  His message for those kids playing now who want to play baseball in college is this:

"Make this goal a priority, practice, and to never quit. During the summer playing baseball, I made every game a priority; I wouldn’t be at the hot beach all day, I would make sure I went to bed early the night before, and I always tried to eat healthy and drink a lot of water. I also would hit off a tee and in my backyard cage before every single game. This might sound boring or a lot of work, but it has all paid off. During high school it is important to make good choices and not put yourself in a bad situation; again, it might sound boring, and it was, but it has all been worth it. Lastly, I would emphasize never giving up. If you don’t hit once at the plate, try to figure out why and let it go. Go out to the field and just focus on making the next play. When you are at the plate again, lock in and see yourself hitting the baseball. Coach Niles would always talk about putting in the work, trusting the process, and then good results would follow. It also important to be a good teammate and to do what your team needs."

Cignetti reinforced this message to the players during the ceremony. "This could be you," he said. "Lots of hard work, a lot of dedication, always being a great teammate, being a friend, which we stress in this league, and showing great sportsmanship."

Southworth credits his success to many folks, including his previous coaches Jason Trask, Bob Niles, and John Jamieson.  He also thanks his father, Wayne, who not only coached him for many years, but was also former HLL President and his mother, Michelle, who attended every game taking photos and videos of not only him, but many of his teammates throughout the years.

Congratulations Winston! We look forward to following your career in college and beyond.