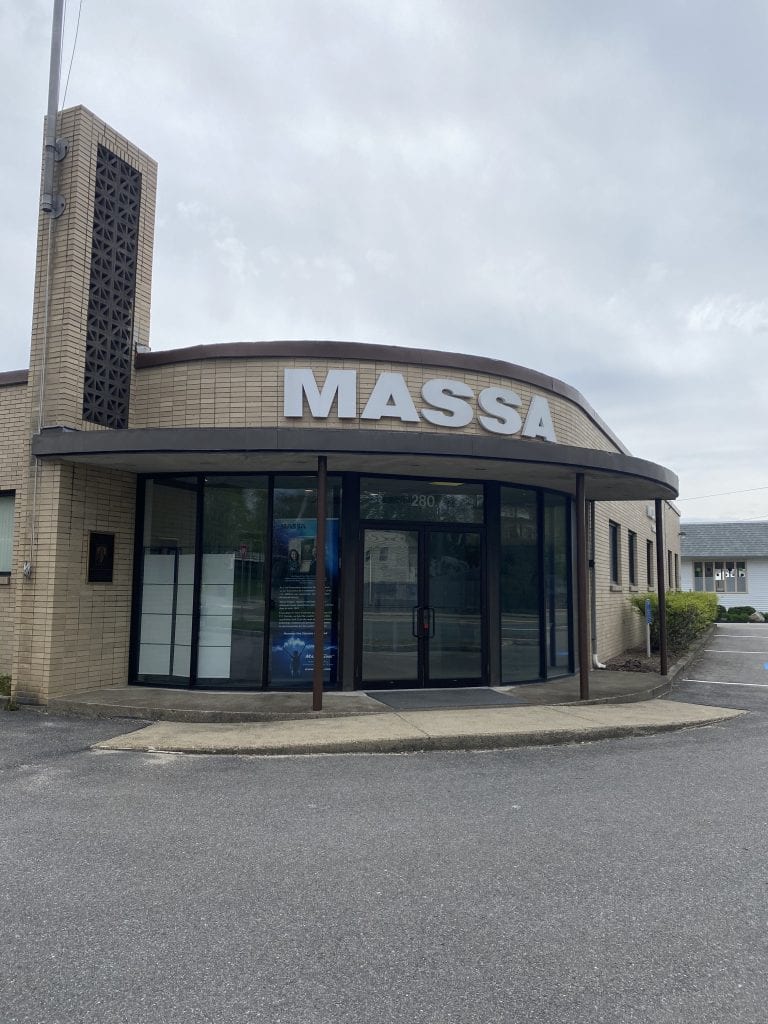 May 11, 2020 by Carol Britton Meyer (all photos courtesy of the Massa Family)

The third-generation, family-owned and operated Massa Products Corporation is celebrating its 70th year in Hingham.

Founded by the late Frank Massa, the company has operated from its 280 Lincoln St. location for most of its 75 years, with a focus on quality and customer service.

Massa, often referred to as "The Father of Modern Sonar Transducers," is considered to be a founding father in the field of electroacoustics (involving the direct conversion of electrical into acoustic energy or vice versa) and founded the company first as Massa Laboratories in 1945 in Cleveland, Ohio.

Earlier he developed and perfected the sonars used in World War II.  Sonar is a system that uses the reflection of sound waves underwater to measure depths and detect objects.

While these times are tough for many companies, Massa is considered to be an essential business during the COVID-19 crisis, and both the company and its employees are thriving while adhering to social distancing guidelines, sanitizing the entire building, and wearing face masks and protective gloves when they aren't working from home.

'Passion for the company'

She was fortunate to be able to see him in action throughout her childhood.  "I lived across the street from him, and we were extremely close. He was definitely a major influence in my life -- personally, professionally, and on my fundamental values," Stancavish said. "He had such a personality that when he entered a room he was a crowd unto himself. He looked like Einstein as he got older."

Treasurer Ed Casey respected Frank Massa for the expert in the sonar field that he was. "His desk and spirit are still here in the building," he said.

Casey is one of the Massa company's most trusted employees, according to Stancavish, and has worked there since 1981. "There's never a dull moment," he said. "The employees are really passionate about their work. We're really busy with lots of contracts -- it's an exciting time to be here."

With more than 165 U.S. patents awarded for innovation in electroacoustic technology, the Massa company designs, engineers, and manufactures state of the art sonar and ultrasonic products for use in the water and in the air. Their products are for sale in commercial and industrial markets and to the military.

'Eyes and ears for naval ships'

The business is described as "the eyes and ears for naval ships and submarines that protect the U.S. coastline with our undersea technologies," on the Massa website.

Massa employees are working hard during this challenging time "keeping our contractual requirements to deliver sonars to the Navy, which in turn is keeping our shorelines safe from enemy attack," Stancavish said.

Back to the founder of the company, Frank Massa, a MIT Swope Fellow Graduate, became involved in the sound industry back in the early days of the Victrola. He worked at Victor Talking Machine and RCA Victor, and later Brush Development Company and continued to create new designs and patents throughout his career.

He was also involved in the development of sound for motion pictures when silent films were being replaced by “talkies" and designed the ribbon microphone used by NBC.

As a technical genius, Frank Massa had no problems with the advancement of technology, but when it came to computers he was wary. This was not due to the technology, but rather to the potential for human error, according to Stancavish's father, Don Massa, president and chief technical officer. 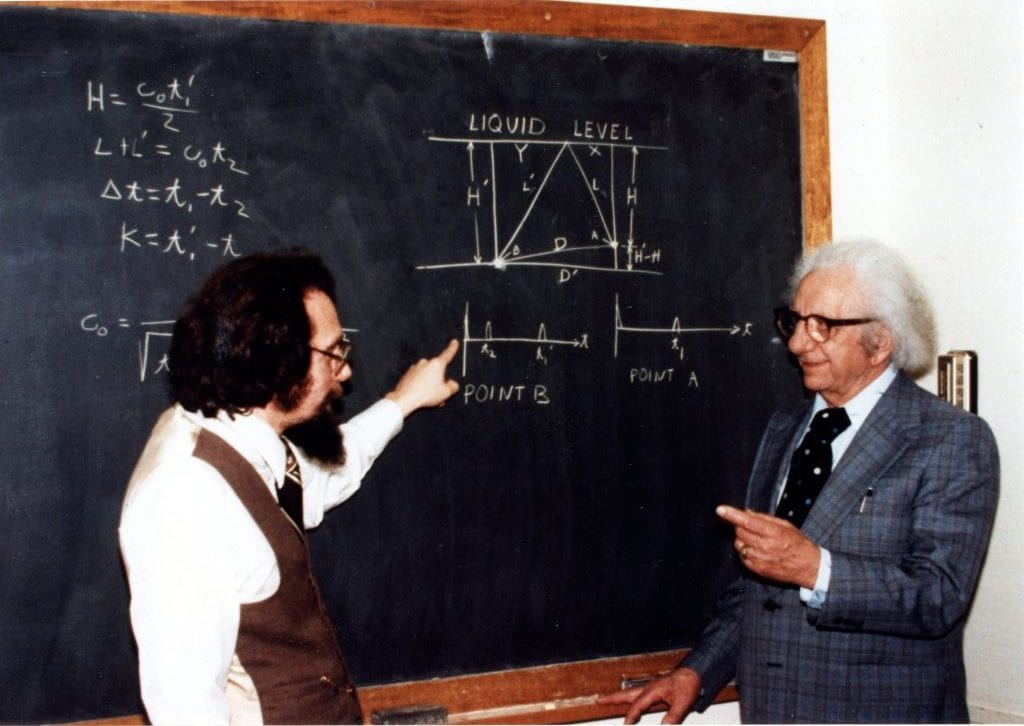 Frank Massa stressed quality and top performance, based on the premise that people should do their due diligence to check their work rather than blindly take the information from the computer as fact, and that people need to think for themselves and not rely on objects to think for them.

When asked to name some of the benefits of working in her family's business, Stancavish responded: "We're privately owned and can use common sense with our priorities within our business and strategic goals. We're also able to act quickly when something needs to happen for a program, a development, or a customer because we're not bureaucratic.

"It's extraordinarily rare to have a business of our nature that is also family-owned and run," she said.

One of the main things that sets Massa apart from other companies, Stancavish said, is that Massa does things differently. "This is why we're still successful and set apart from our competitors as we enter our 75th year," she said.

'We're all in this together'

"Maintaining a sense of humor is important to a business," Don Massa said. "We have to be able to laugh at things that happen and at ourselves. We're all in this together."

The Massa company is a "fun place where [our 70] employees are considered and treated as extended family. The company is also run with a 'Founder’s Mentality and Spirit' that came (practical jokes and all) directly from Frank Massa and the Massa family," Stancavish said.  "People working at Massa don’t just do their jobs, they enjoy them.   Laughter and comradery are essential to our philosophy, culture, and success. If you have fun working, you always do your best." The mantra and culture at Massa reinforced by Stancavish is, “At MASSA we do Whatever it Takes!”

Stancavish learned the ropes of the family business starting at a young age, when she was invited to join several business trips and dinners and often spent days at the company as a young girl. "Networking and getting to know people builds trust that grows business," she said.

Acoustic Innovation Engineer & Associate Director of Operations Steve Woodaman was drawn to the Massa company because of its hands-on environment and because "it seemed like a great place to work." That has proved to be the case.

Woodaman benefitted from the mentoring that the Massa company is known for.  "It wasn't like working for a large company. The employees know the Massas both in and out of the workplace and the history of the business," he said.

Longtime employee and Vice President Dick Carpenter has worked at Massa for 48 years and has enjoyed every minute of it. Having worked for RCA and NASA before he accepted a position with the Massa company at age 28, Carpenter found working there a refreshing if challenging change of pace. "All of a sudden I was responsible for projects, working whatever hours it took to get the job done," he recalled. "It was all very new to me, and it obviously worked out."

Massa employees who go the extra mile get rewarded for their efforts. "That's why we have such longevity and loyalty here," Stancavish said.

In its support for the Hingham community, the Massa company is a business partner with South Shore Conservatory, Cohasset Center for Student Coastal Research, the Hingham Historical Society, and also supports and partners with the Hingham Robotics Club.

"We believe in giving back to the community and inspiring the future generation in creative thinking in the arts and sciences," Stancavish said.