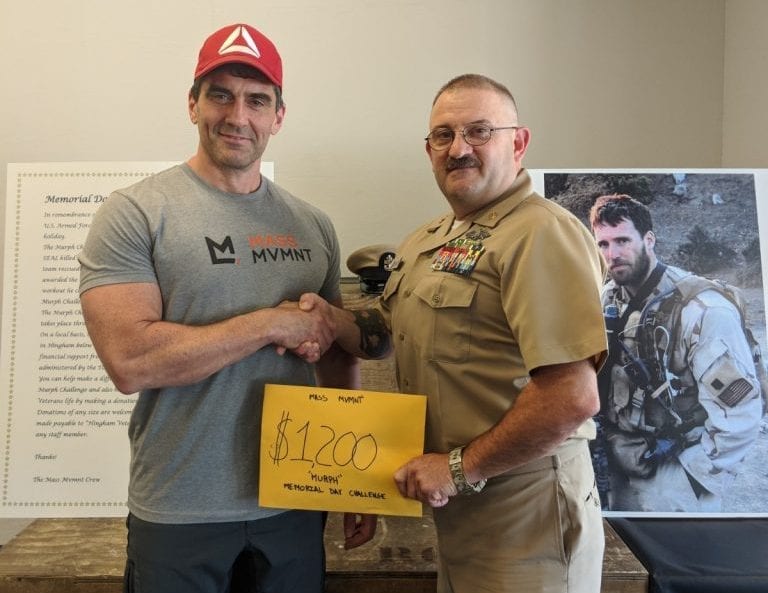 The Murph Challenge is in honor of Lt. Michael P. Murphy,  Navy SEAL killed in Afghanistan in 2005 while trying to have his SEAL team rescued during a firefight with the Taliban. Lt. Murphy was awarded the Congressional Medal of Honor .

He had created a workout he called the “Body of Armor” which is now known as the Murph Challenge.

The Murph Challenge has become a Memorial Day tradition that takes place throughout the United States in remembrance of all those who died while in the service of the U.S. Armed Forces.

This year, Mike Monarch, owner of Mass MVMNT was quoted as saying, “We had a huge turnout for this years' Murph Challenge… In addition to paying respects to those who have fallen for our country by pulling together to get through this long difficult workout, our community also raised over $1,200 for the Hingham Veterans' Benefit Fund. Thank you to everyone who made this an amazing day!”

There are approximately 30 veterans and their dependents living in Hingham below the Federal poverty guidelines that receive financial support from the Hingham Veterans Benefit Fund, administered by the Town of Hingham Veterans Services’ Office.  The participants and owner of Mass MVMNT made a difference in these Hingham Veterans lives by turning their workout into real donation dollars.

SCPO Keith Jermyn, Director of Veterans Services said, “THANKS AGAIN to the owner and staff of this business for being such an integral part of our veterans community here in Hingham!” as he shakes the hand of owner Mike Monarch after receiving over $1,200 in donations.

Donations of any size are always welcomed and may be in cash or a check made payable to: