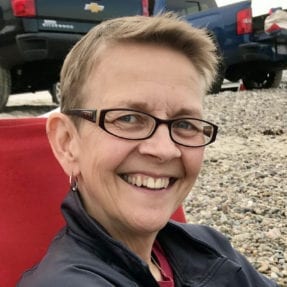 Jennifer (Jay if you knew her, but NEVER Jen or Jenny) died peacefully at home on January 17, 2021 after bravely facing stomach cancer for over three years. She is survived and deeply missed by her wife of 18 years, Amy Hartmann Martell, their two children, Lilja and Theo, her father, Robert (“Jake”) Jacobson, her brother Erik Jacobson, numerous other family members, and countless friends.

Jennifer’s ashes will be interred at Hingham Cemetery and scattered by her family during their future adventures together. A family graveside service will be held on January 30th at 11:00 a.m. and will be live streamed.

Born in Quincy, Massachusetts on August 2, 1966 to Joyce and Robert Jacobson, Jennifer moved to Connecticut as a child and graduated from East Lyme High School. After moving back to Massachusetts, Jennifer completed her Bachelor of Science in nursing at the University of Massachusetts. She worked as a nurse at a number of hospitals and care facilities; for the last 22 years she was a nurse at Brigham and Women’s hospital where she was adored by both patients and colleagues.

Jennifer had a magnetic personality – if you knew her, you loved her. Her smile would light up the room, and her eyes perpetually sparkled with a knowing, mischievous glint. She had an acerbic wit and brought levity and snark to just about every situation, but she also had a way of making everyone feel that they were in on the joke. She was at once compassionate and critical, unafraid to call someone out, and expected the best from herself and those around her. She was a problem solver, a quintessential MacGyver, and believed in working hard and getting a job done without fuss and fanfare. She had jumped out of airplanes and rode a motorcycle, but was at her happiest at home working on a puzzle with her children. She created meaning in her life by taking care of others, and would always make time for a friend, whether for conversation over coffee or to fix their broken lawnmower.

Jennifer leaves behind a massive hole in the hearts of all those who knew her. Friends and family are encouraged to leave condolences and tributes, including photos, videos, and stories about Jay, at https://www.forevermissed.com/jay-martell.

In lieu of flowers, contributions in Jennifer’s name may be made to either Debbie’s Dream Foundation, 2 S University Dr., #326, Plantation, FL 33324 or Hope For Stomach Cancer, 333 Washington Blvd. #609, Marina Del Rey, CA 90292, two organizations that have been working tirelessly to advocate for and support stomach cancer patients and made a significant difference in Jennifer’s life.