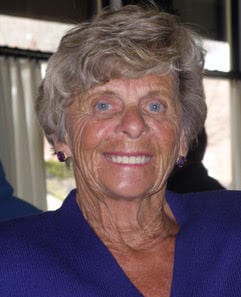 Jeanne Lange Murphy, 84, of Hingham died peacefully surrounded by her family in her home on October 2, 2020.  Loving and devoted wife, cherished mother and beloved Nana, Jeanne gave her heart and soul to her family and her community. Always wearing her signature color purple, and with her boundless energy, unwavering optimism and enthusiasm to help others, Jeanne spent a rich and fulfilling life serving on a variety of organizations, boards and associations.

Born on October 29, 1935 to Charles ("Jimbo") and Peggy Lange in Atlantic City, NJ, she graduated from Holy Spirit High School and worked as a hostess and guide for the Miss America Pageant for many years. She met the love of her life, Peter Murphy, on the boardwalk during his spring break from Villanova University. Their first years of marriage were spent in the United States Marine Corps living in Virginia and California. She moved to the Crow Point area of Hingham in 1960 and never left; throughout her life, she engaged in a variety of civic, educational, athletic, and community endeavors centered around the lives of her six children and sixteen grandchildren.

Jeanne was a fixture in ice hockey rinks, attending track meets or waving from the deck at Hingham Yacht Club’s Wednesday Night Dinners. She was a grand hostess; her family gatherings were legendary as was her Annual Academy Awards Oscar party and Dirty Dozen Tennis luncheons. A favorite spot was inside Loring Hall with her girlfriends watching the latest movies. She could be seen on the sidelines of every one of her family’s sporting events, watching their theater productions, attending their many school milestones, celebrating engagements and weddings, and sending monthly care packages to their colleges and new homes. Her last day was spent wrapping October birthday gifts for her family.

Jeanne possessed an innate flaw of never being able to say “no." She was always willing to step up for whatever needed to be done with quiet and effective leadership.

She was a board member of the Hingham Community Center for nearly 45 years and was a founding member of its Junior Board.  She worked tirelessly on the Center’s major yearly fundraiser, Cabaret, for over 30 years. Whether working the door or arranging seating, Jeanne enjoyed every minute of the over 100 performances. Together with her late husband, Peter Murphy, they were founding members of the Friends of Saint Paul’s School. They initiated the Annual Field Days, built the outdoor playground and were instrumental in keeping the school open in the late 1970’s. Jeanne was active in all aspects of youth sports in Hingham and served in leadership positions in Hingham Youth Hockey, Pop Warner Football cheerleading, Hingham Baseball, GALS softball, the Hingham Yacht Club and Lincoln Sailing Center. She was the first female commodore of the Crow Point Sailing Club and helped keep it vital for many years. In addition, she was involved in the Hingham Historical Society, Red Cross, Garden Club and the Hingham Chapter of the Red Hat Society, The Hingham Tennis Club and the parent organization at Hingham High School.  For all her dedication and commitment to the citizens of Hingham, Jeanne was recently named Grand Marshal of the 2020 Hingham Fourth of July Parade.

An avid bridge player and member of the American Contract Bridge League, she held the rank of Club Master. She was an excellent tennis player and served as Executive Director of the New England Racquet Sports Association and more recently the Executive Director of the Massachusetts Indoor Tennis Association.  A skillful golfer who enjoyed her time with friends at the South Shore Country Club and Wollaston Golf Club.  She won the Octogenarian Club Championship in 2017 with her granddaughters as her caddie.  In later years, bowling with the girls was a staple activity each week. She was an avid Boston sports fan, and rarely missed an opportunity to cheer on the Red Sox, Bruins, and Patriots.

Her most cherished roles were with her loving family: Jeanne is predeceased by her husband, Peter Murphy, and sister Mollie Reis. She is survived by her brother and sister, Michael J. Lange and Sallye Nordling (Bill). She will be missed beyond the ability of words by her four sons Paul, Drew and his wife Stacey (O’Brien), Greg and his wife Maria (Martignetti), Geoff and two daughters Liz Kloak (George) and Jayne Martinage (Patrick). She will always be their Nana; Melissa and Elisabeth Murphy, Kathryn Murphy Ferrucci (Michael), Brian and Rose Murphy, Peter, Lucie, George and Lillie Kloak, Madeline, Emma and Eleanor Murphy, Drew Martinage and Max, Gustav and Ella Murphy and newest great-grandson, Luke Ferrucci. She is Auntie Jeanne to many nieces and nephews.

In Jeanne’s memory, wear some purple and consider community service.

Visiting hours will be held 3:00 – 6:30 pm on Thursday, October 8 at Pyne Keohone Funeral Home, located at 21 Emerald Street in Hingham. The funeral and internment will be private.

In lieu of flowers, gifts can be made to the Hingham Community Center, located at 70 South Street in Hingham, MA.