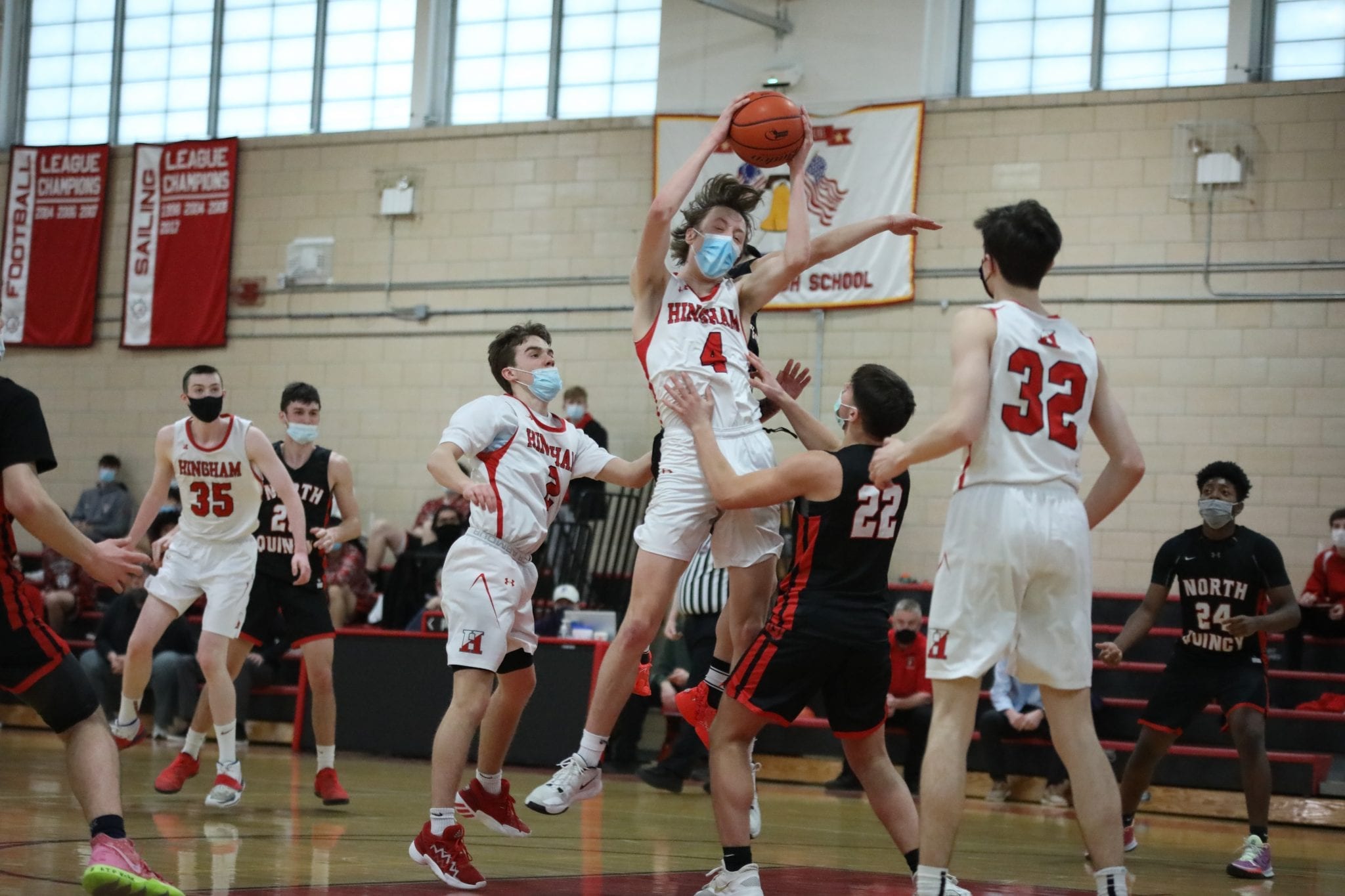 Junior Nick Johannes, who had a big night on both ends of the floor, grabs this rebound.

The Hingham Harbormen basketball team triumphed over the North Quincy Raiders in today’s semifinal matchup in the Patriot Cup. Having soundly beaten Hanover 66-47 in their first game of the tournament, the Harbormen continued the same energy against North Quincy. Hingham and North Quincy also faced off earlier this year, resulting in a North Quincy victory by three points.

“That first game of the season, that was the first time that we were on the court in Covid but they’ve come a long way and clearly we have too over the last 6 or 8 weeks,” Coach Bob Kniffen remarked about the team’s first matchup. And the Harbormen did improve, by a margin of 13 points.

Hingham started strong, leading North Quincy 15-8 at the end of the first quarter. Key contributors were Junior Nick Johannes and Senior Jack Hurley, driving to the basket on many plays. The Harbormen held the Raiders at bay through the end of the half before pulling away in the third and 4th quarters.

Johannes was a constant problem for the Raider defense, putting up 16 for the game through his aggressive drives to the basket. “They were pressing up on our shooters,” Johannes explained, “so when I drove, they wouldn’t collapse on me because they were too busy focusing on Liam and Curtis.” Johannes also pointed out the key spots on the court where Hingham won match-ups, “It all started on the rebounding end and our defense was much better focusing on stopping them in the paint.”

When asked about the strong bench performances from his players, Kniffen commented, “we had a lot of contributors tonight, not just the five stars but we had guys come off the bench that had some big plays even if it was in shorter minutes, like Evan Williams comes in and makes a huge three for us off the bench, Jack McBride comes in and gives us a boost on the offensive end, Andrew Teague comes in the last four minutes and helps with the defensive effort to close out the game.”

Kniffen also highlighted his players in the starting line-up. “He has the versatility,” Kniffen said of Johannes, “he’s definitely a hard matchup, he’s quick, he’s strong, he gets to the basket, he finishes well.” That difficult match-up was the game-winner in Kniffen’s eyes, “He poses the matchup problems that don’t just benefit him but benefit other players on our team too.”

Hingham plays Whitman-Hanson Regional High School in the finals of the Patriot Cup tournament. Hingham lost to the Panthers twice, 69-57 and 72-57 earlier in the season, but Kniffen was optimistic about the upcoming game. “They got us the first few times this year but every time we hit the court I feel like we’re better, [we have] kids who work hard in practice and I’m excited to have the opportunity to compete.” Furthermore, with the removal of the State Championships to stay Covid-19 compliant, Kniffen is still excited about the matchup that the boys will face, observing that, “a match up with Whitman Hanson in the championship game is as good and as competitive as you’ll get at any level in the state tournament.”

The Harbormen play against Whitman Hanson on Saturday, February 20th at 3:00 PM. Click here to watch the live game. 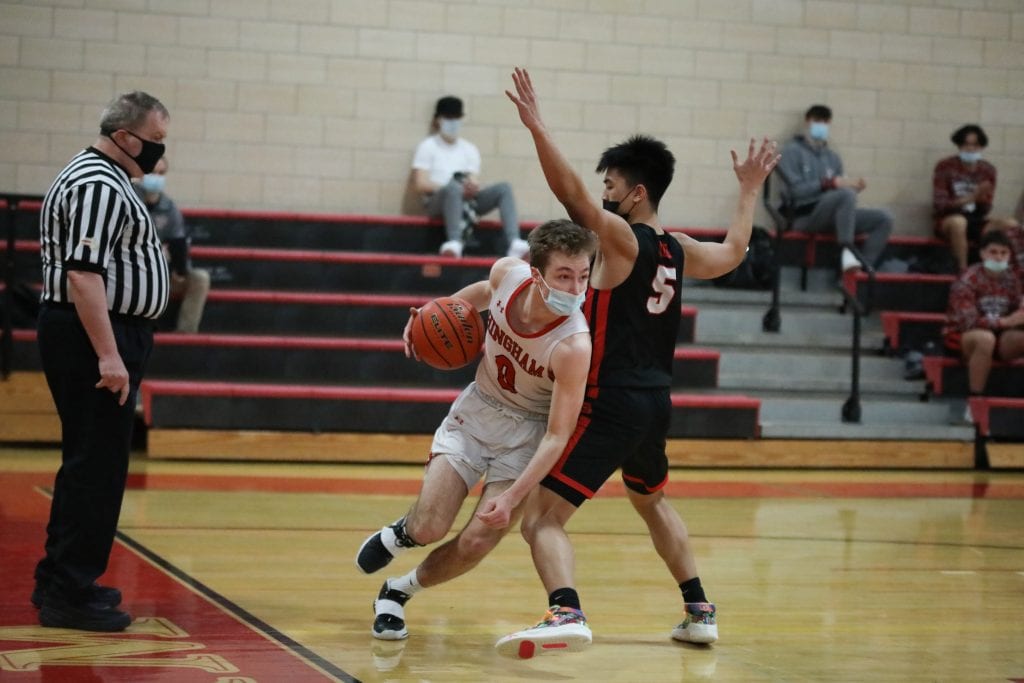 Senior captain Jack Hurley drops his shoulder and gets around a N Quincy defender. 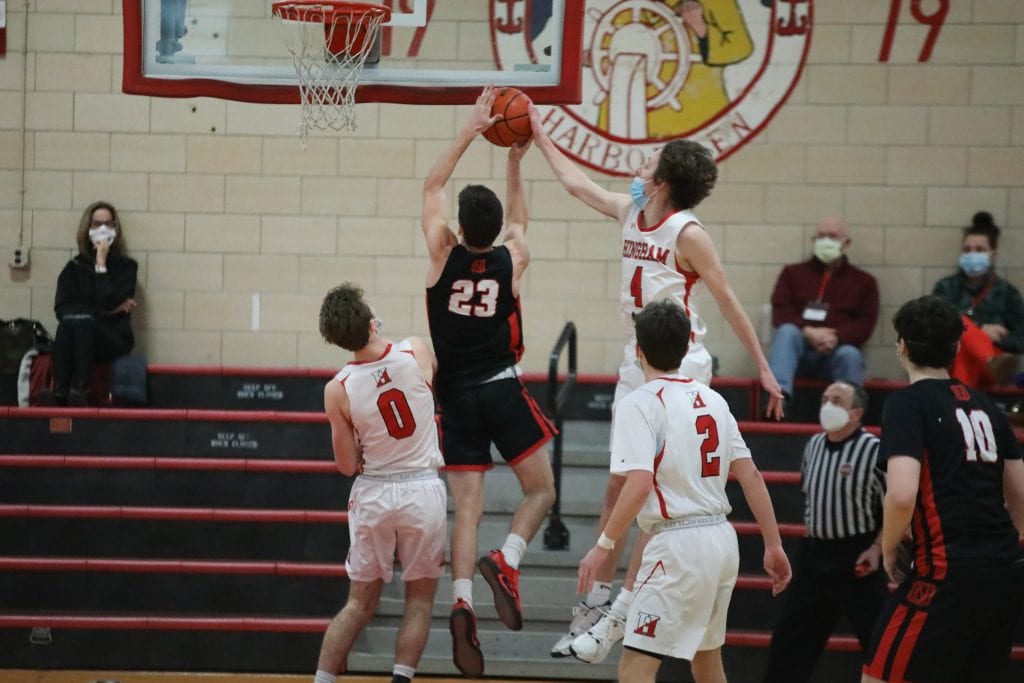 Junior Nick Johannes with a block from behind early in the game. 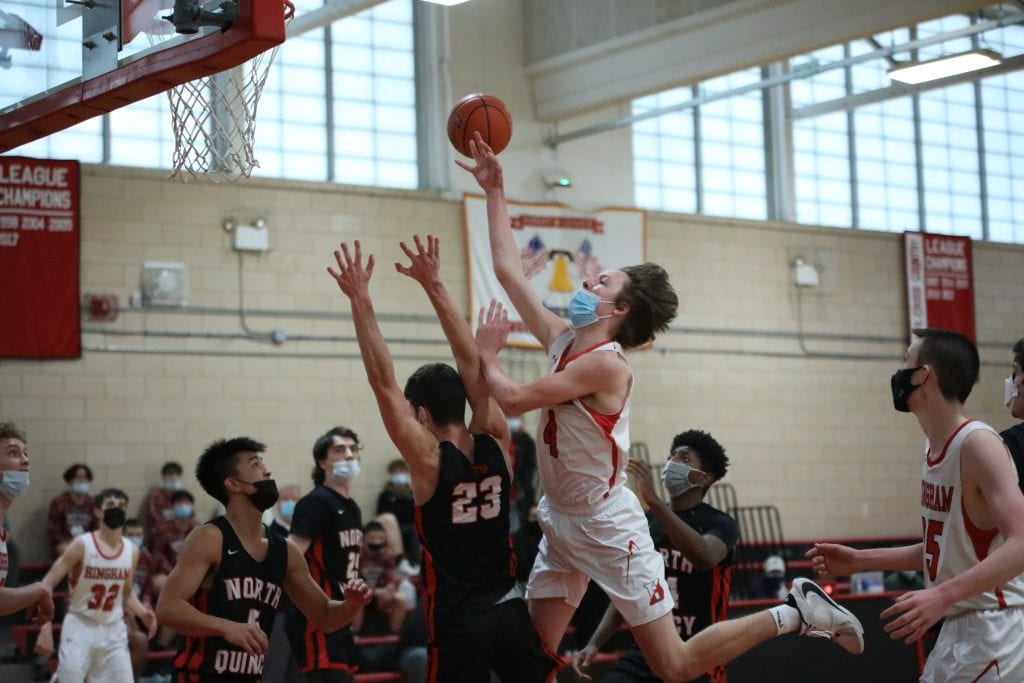 Junior Nick Johannes follows up the block with a drive to the basket, where he is fouled. 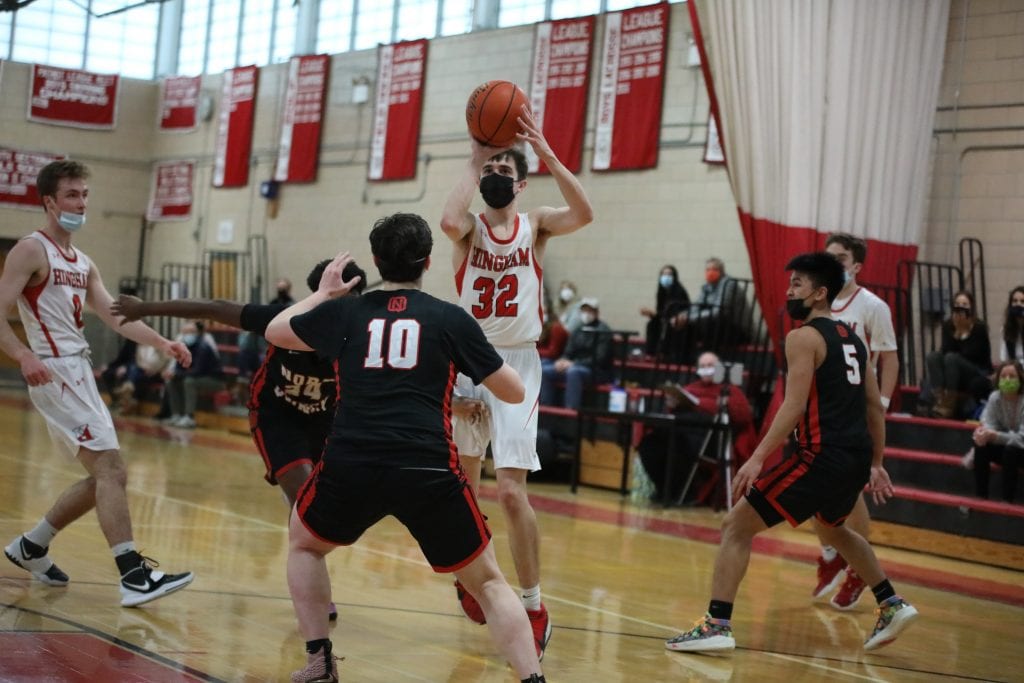 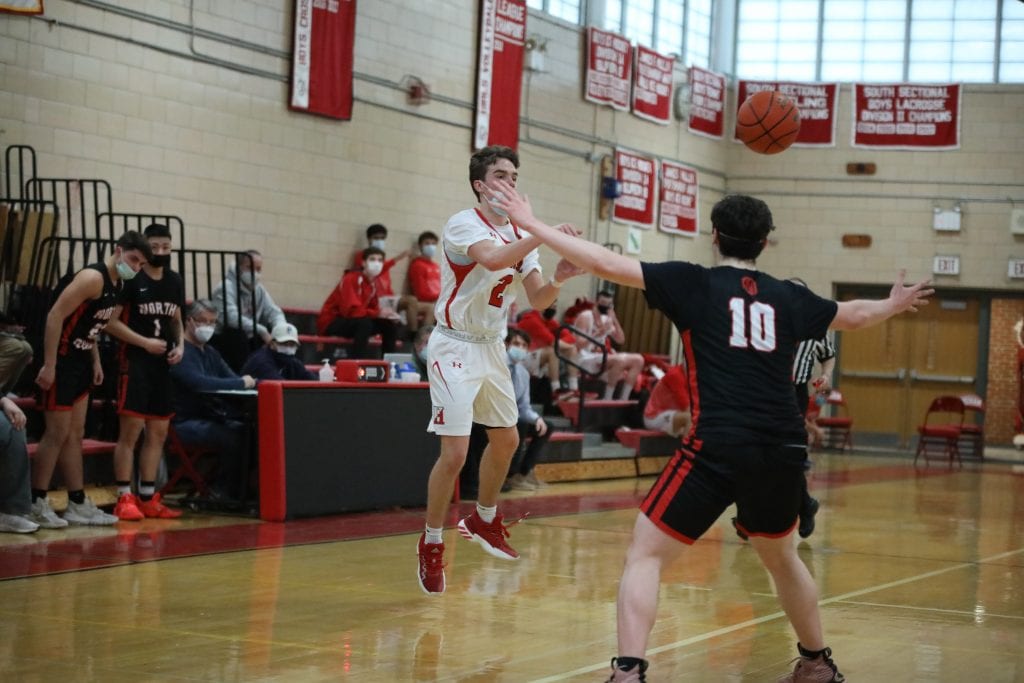 Junior Curtis Murphy passes the ball inside to one of his teammates. 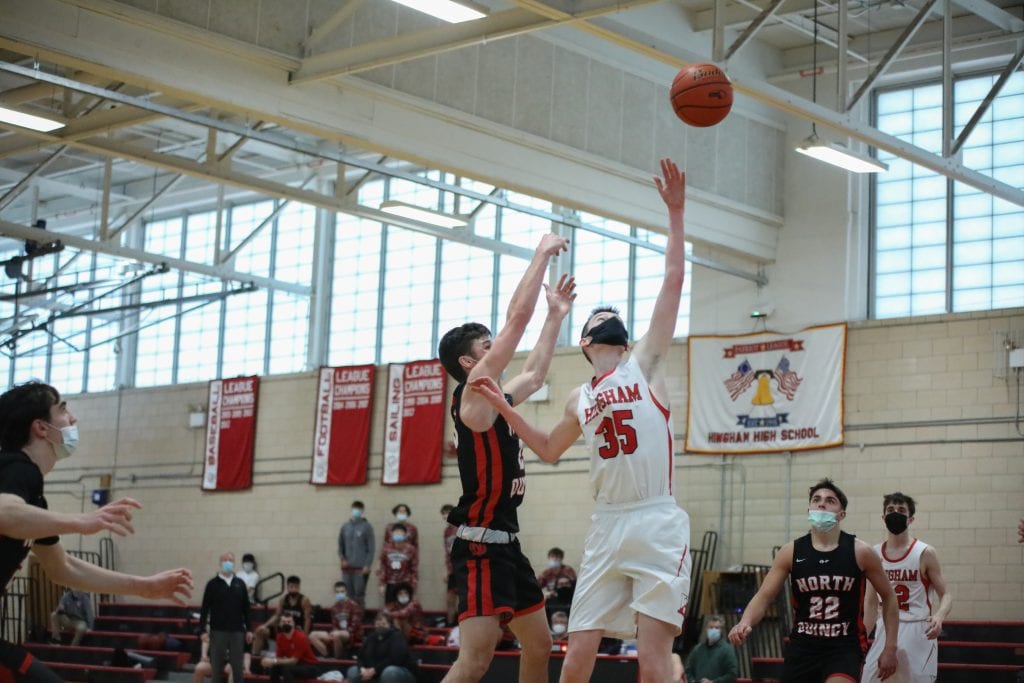 Senior Connor White gets a hand on this shot in the second quarter. 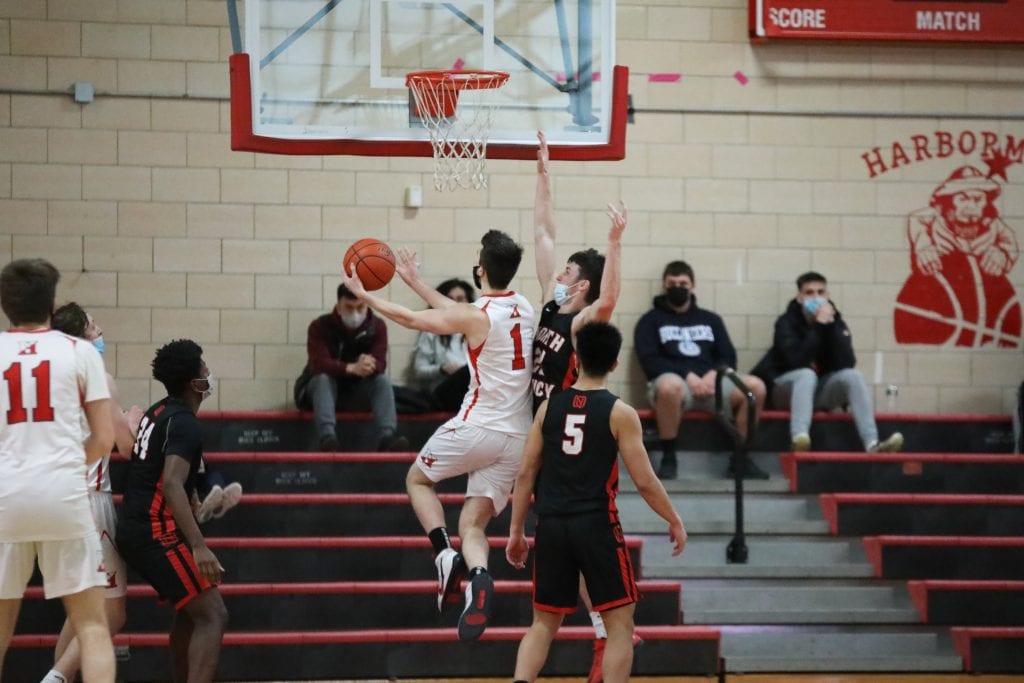 Senior Jack McBride once again comes in off the bench giving his team enegry, and points. 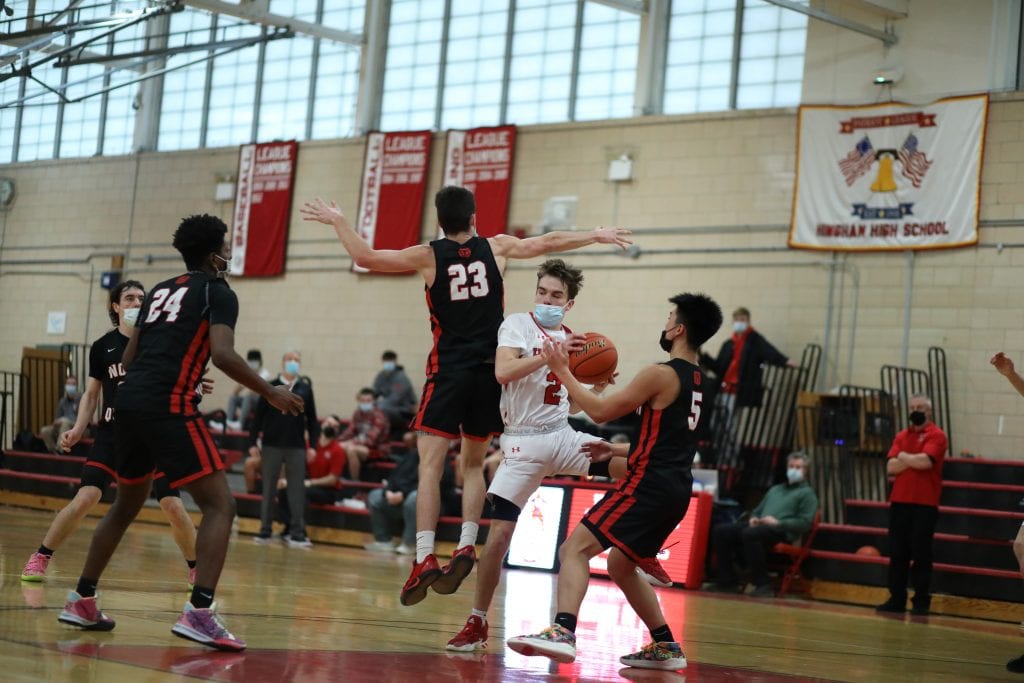 Junior Curtis Murphy comes down with a rebound. 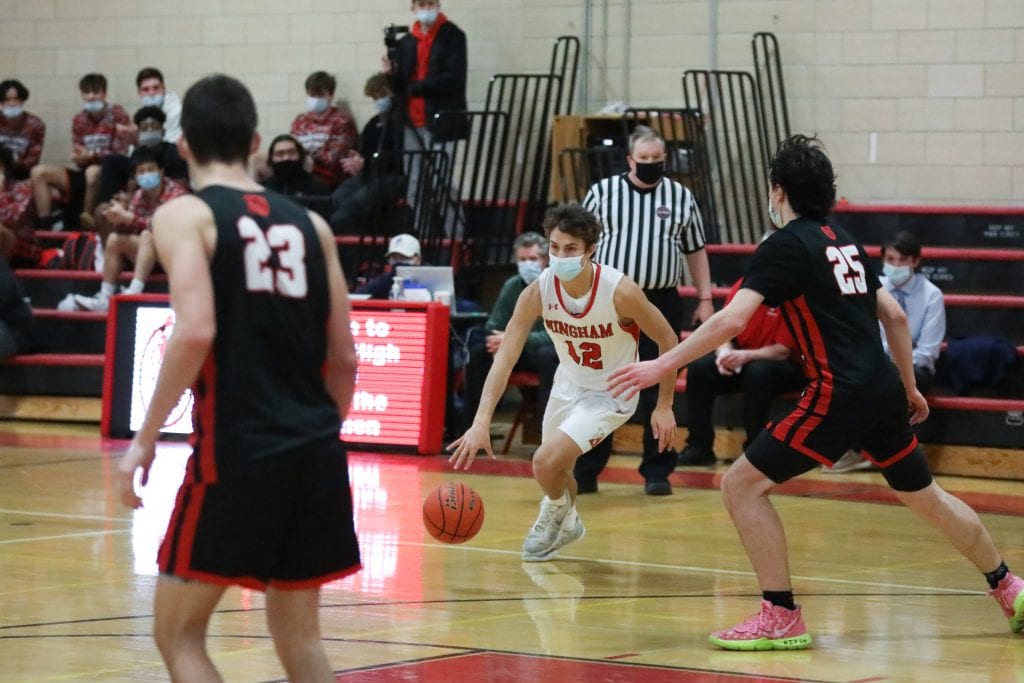 Junior John Sula puts the ball on the floor and drives to the basket. 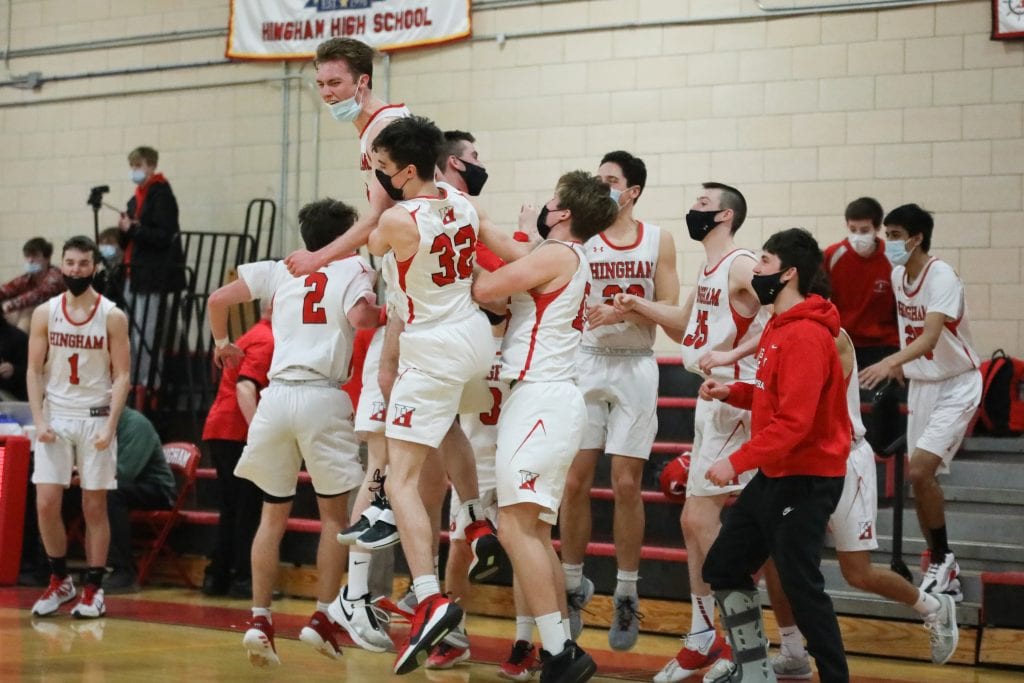 The Harbormen are one win away from the League Championship.