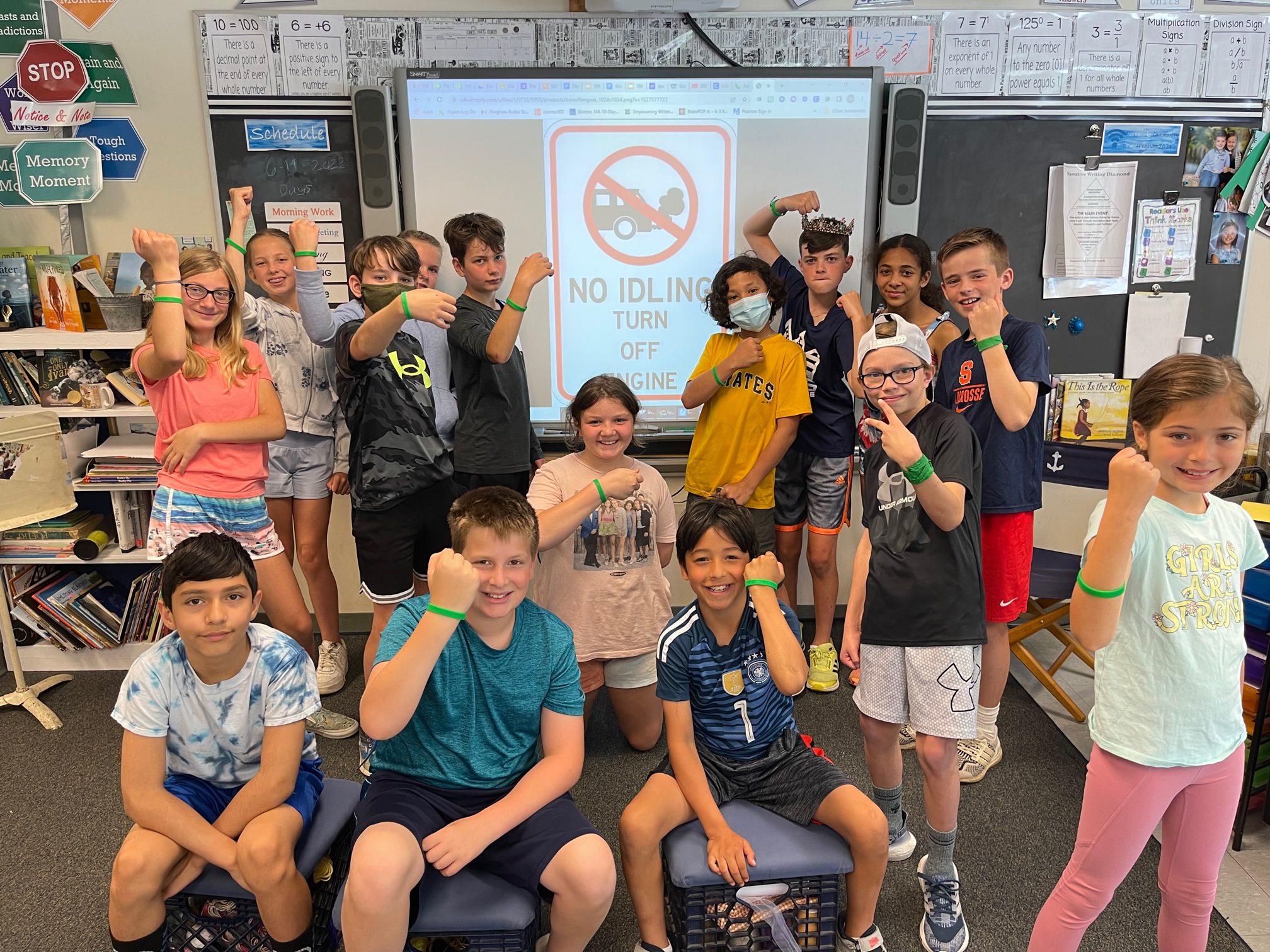 Turn Your Key, Be Idle Free!

10 seconds rule: If you are waiting for more than 10 seconds, turn off your engine.

It’s a breezy but sunny Monday morning when I meet with six 5th graders from Foster Elementary School, my first members of the secret mission team. Their secret weapons? A clip board with an observation chart, a pen, a watch, and their observation skills. Their secret mission? Observing how many cars and for how long these cars leave their engine running without going anywhere during student drop off time. The drop off (and pick up loop) at Foster Elementary is always a very busy place. My secret mission team does an incredible job observing the cars both in the mornings and the afternoons for 4 days in a row. Together with their teacher they analyze the collected data during their math hours – applied science at its best! ‘This is incredible’, Sloane exclaims when finishing her calculations,’ on average, 81% of the cars are idling at our school every day!’

Massachusetts’s law prohibits unnecessary idling. But as the collected numbers show, nearly everyone is doing it. ‘It wasn’t even cold that day’, Leo observes’, the temperature we recorded on our chart says 53F. No need for extra heat in the car then, right?’ So no, we don’t idle because of the cold (or hot) outside temperature. We idle because we’re used to it. It’s become a habit. We observed it with our parents, copied it and our children will probably copy us later as well.

‘But the fumes are toxic for us children,’ Oliver notes. ‘Per day, idling vehicles at Foster emit at least 1lb of carbon monoxide (CO) which equals the same amount of CO in the smoke of 50,000 Marlboro light cigarettes. This can not be healthy.’ And Oliver is right: Children are more susceptible to air pollution because of their developing lungs and higher breathing rates. Car exhaust contains air toxics which are known to cause asthma, a decrease in lung function, cardiac disease, and cancer. ‘Idling also hurts our planet,’ Ashley adds’, for every 10 minutes of idling, an extra pound of Carbon Dioxide (CO2), (the primary contributor to global warming and the climate crisis note from the editor), is released into the atmosphere. Every single vehicle at Foster idles for about 3 minutes – that’s 1,000 minutes in a whole school year! The idling at our school is wasting about 723 gallons or $2’473 (at a price of $3.42/gallon note from the editor). Imagine what you could buy with this amount of money, imagine what the school could buy with it!’

The secret mission team decides that something needs to change. They create an amazing ‘turn your key, be idle free’ brochure which includes a pledge form for families to stop idling and their personal letters to the Foster community. And the Foster Elementary school fully supports the children’s ask by re-announcing no-idling guidelines to protect the health of their students and the environment.

Fast forward 6 months. Over 50% of all Foster Elementary students returned their pledge and 3 classes even had 100% participation (teacher included!) and earned themselves extra recess. The fifth graders and their little buddies created amazing ‘thank you for not idling’ posters which they displayed during several afternoons at pick up time. 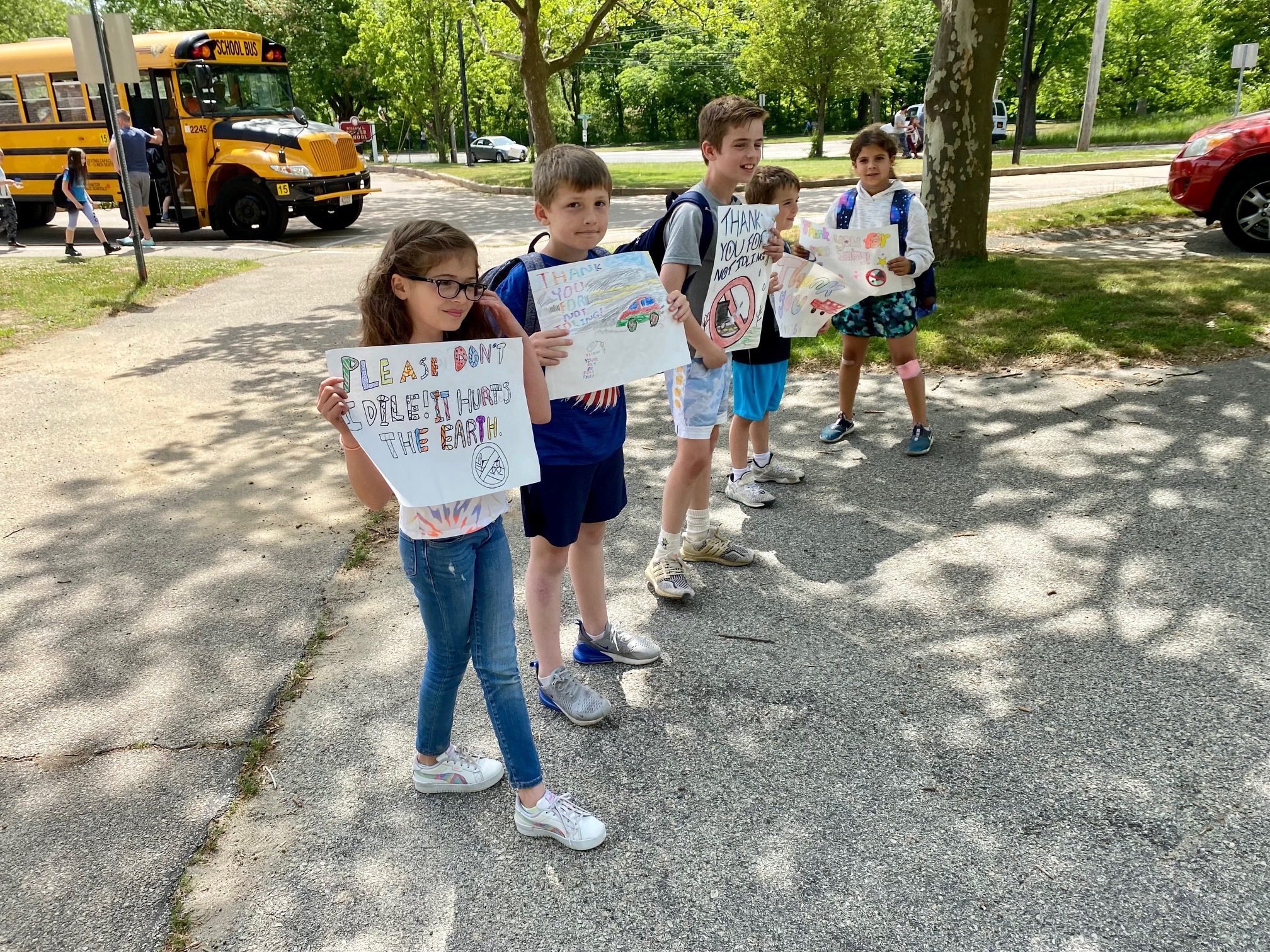 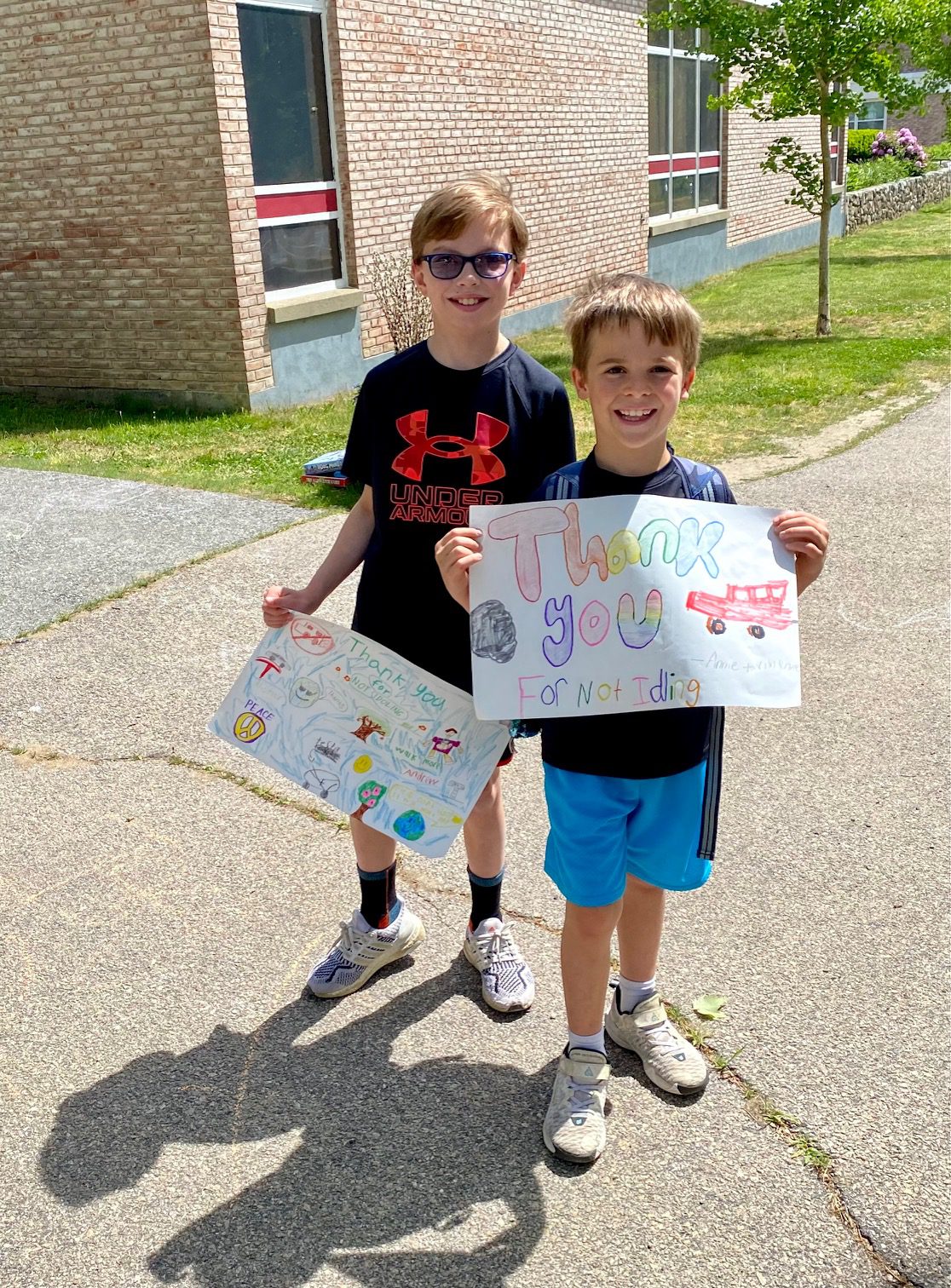 But did we, adults, now really live up to our pledges and did we start changing our behavior? Time to call the (now not so secret) mission team again. And what the team reported is very encouraging: Back in December, 4 out of 5 cars were idling when dropping off/picking up children. Six months later, only 3 out of 10 cars were idling. This means the idling rate dropped by more than half thanks to the Idling Reduction Campaign! This also means that the air pollution and the CO2 emissions dropped by more than half: cleaner air to breathe for everyone, less climate change enhancing emissions. 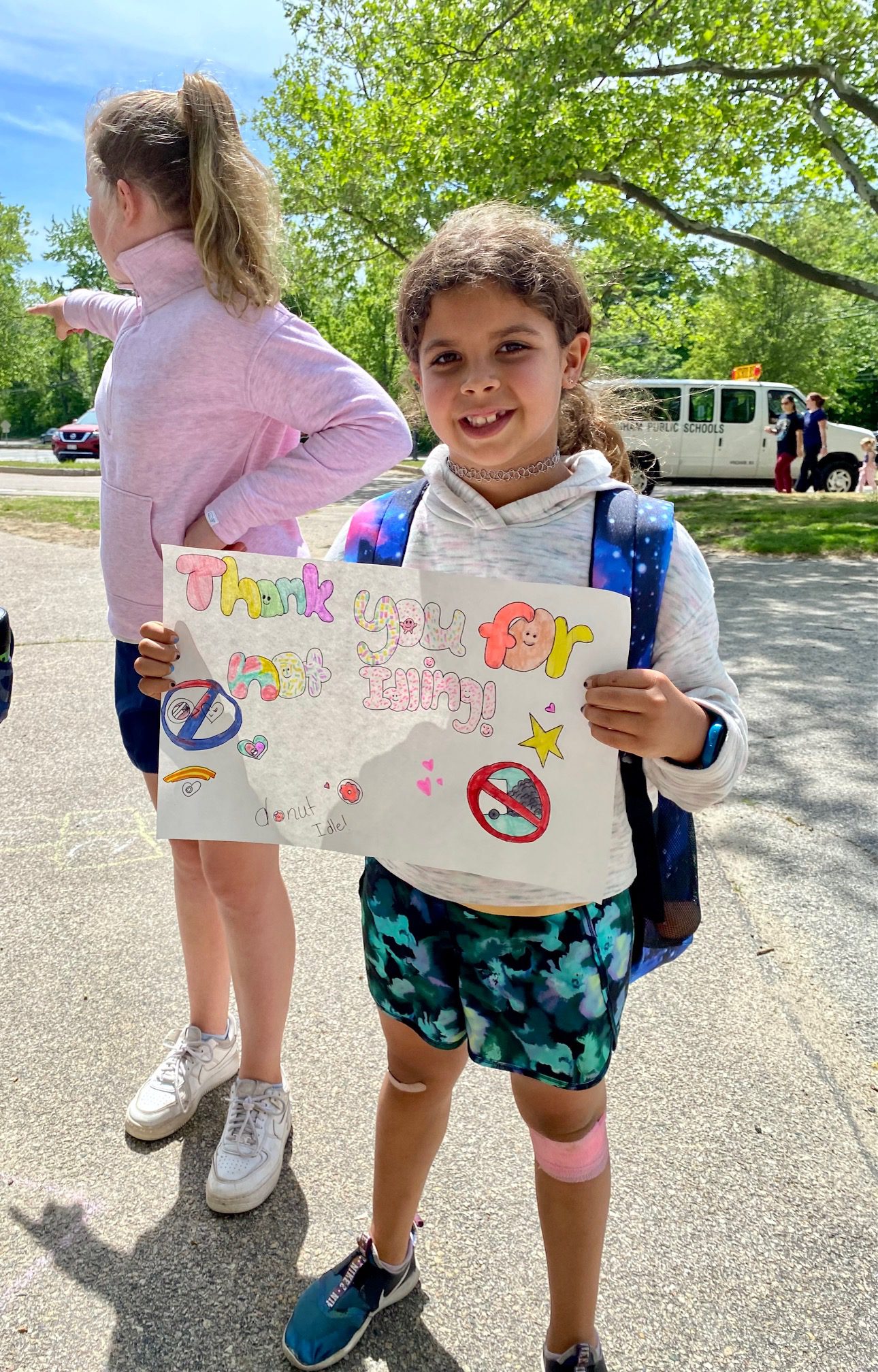 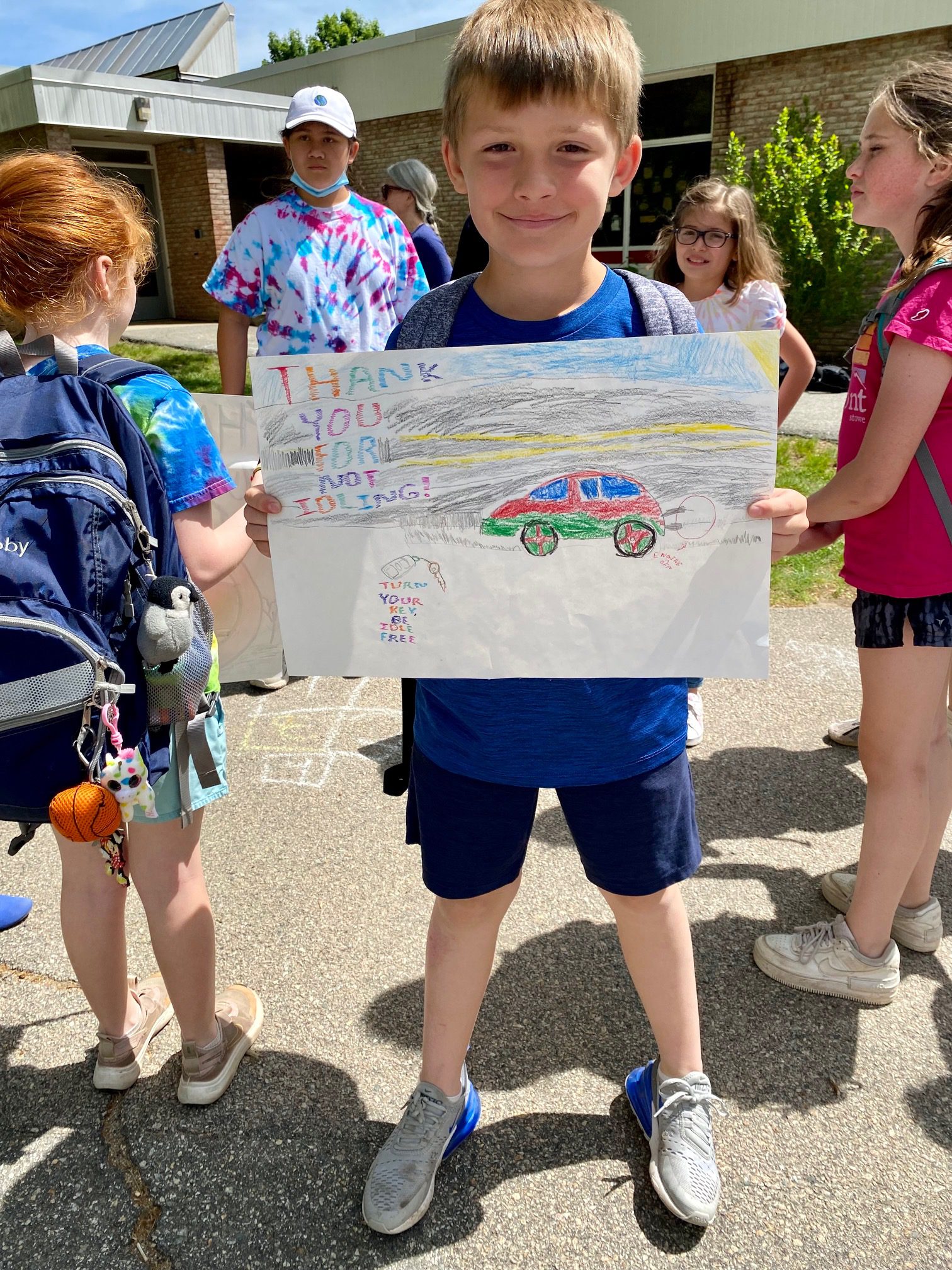 And the nicest surprise of all? State Environmental Officials announced that Foster Elementary (5th grade) is one of 27 schools across the Commonwealth to receive a ‘Green Team’ Award for outstanding environmental actions.