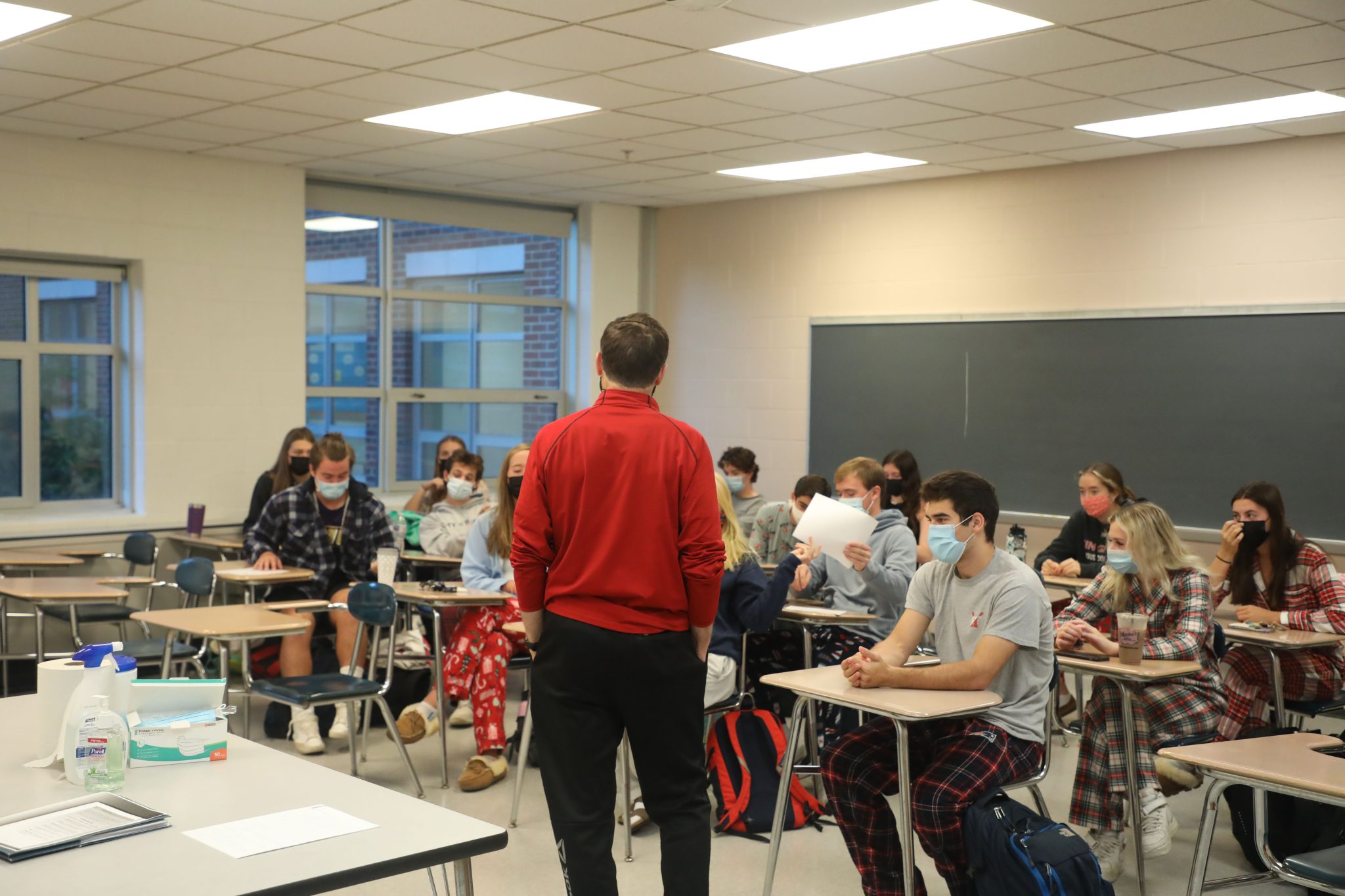 Fall sports captains meet for their final class back in October on an early Thursday morning.

The concept didn't start in Hingham, but it has certainly flourished in the environment which has been created.

The name of the course--if you want to label it that way--is Captain's Class, a once-a-week (for six weeks) gathering of the captains of in-season teams at Hingham High School to talk about leadership.

''The program is for the sports captains to teach them what their roles and responsibilities are as captains, but more importantly to give them the knowledge and to be successful as leaders,'' says Drew Pace, who along with Hingham athletic director Jim Quatromoni, brought the program to Hingham.

Pace, who serves as the defensive and wide receivers coach as well as the strength and conditioning coach for the football team, certainly has the credentials. Pace played football and baseball at Yale and has a Masters degree from Dartmouth.

"We meet once a week for six weeks with the in-season captains so they can apply the lessons as soon as that afternoon at practice. We also ask the coaches to be familiar with the curriculum and look for opportunities to reinforce the lessons during practices and games.''

Quatromoni, who says he is familiar with similar programs at Whitman Hanson and Abington, says the idea is as much an educational tool as a lesson in leadership.

"We started this program understanding that leadership and being a great team captain is not necessarily something we are born with,'' he said. "Instead, the skills can be learned and developed. Very early during my time at Hingham, I recognized Coach Pace shared my passion for this initiative and the work involved.''

"Captains' practices'' has been part of the sports culture in high school for decades, an easy way for athletic teams to mesh conditioning in the off-season with team chemistry.

More often than not, Captains are also winners of popularity contests as much as their leadership qualities Hingham is attempting to carry that to another level.

"Captains are named for their sport, but they are set up for failure because they really don't understand what it means to be a leader, how to be a leader to how to be a mentor, motivator, disciplinarian, etc.,'' said Pace. "And we don't teach them what they need to know. As a result, they are expected to do something they are unprepared for, or we don't expect them to do as much of anything and "captain'' becomes a "ceremonial'' role.

"When you ask a new captain, "What's your next step?" the vast majority have no answer. We need a proactive plan to develop them.''

Brian Odell was part of Hingham's graduation festivities last week, but his resume includes a successful stint as the captain of the boy's soccer team as well as a member of the track team, during which his leadership skills developed if not blossomed.

"It helped in so many ways,'' said O'Dell, who is going to UMass next fall. "Showing us what our roles as captain should be and how it was much more than simply playing.''

One of the key lessons was emphasized by Quatromoni, who told the captains about the New Zealand national rugby team known as the All Blacks, who preach a mantra known as Sweeping the sheds'', which meant that the captain's role continued before and after the competition with such chores as picking up equipment.

"That really stuck,'' said Odell, who said his only criticism was of the early class time (7:15). "I'm a morning person, so it wasn't too bad. But it was tough for some of the other captains.''

Odell also said he learned about how criticism can be offered in a positive way. "Learning how to deliver it in the proper fashion really helped," he said.

The original plan was to hold the classes "in season'', but Odell says that classes are being held now. "Having that BEFORE the summer for the incoming captains will help a lot," he said.

Reactions from other captains were also positive.

"It's been just so helpful learning from other captains about how they do things," said Alexa Vahoriak, a two-time soccer captain as well as a member of the girls' lacrosse team. "And it has shown me how to motivate people and deal with both the positive and negative."

Pace says the ultimate goal is to go beyond athletics and offer it to a widespread group of students.

"This class is important as we strive to be intentional about teaching and developing leadership'' said Quatromoni. "This allows team captains to help improve, develop and/or protect their culture within their program. It gives team captains some ownership in how we represent the Hingham High School Athletic Department."

"The benefits are twofold,'' he said. "1. Obviously, leadership skills will help them be successful in life. 2. A strong leader/captain will make the team more successful. There is plenty of research that shows the best teams have strong leadership among the players, especially the captains. If the teams perform better, the kids have more fun, which is why they play the games.''