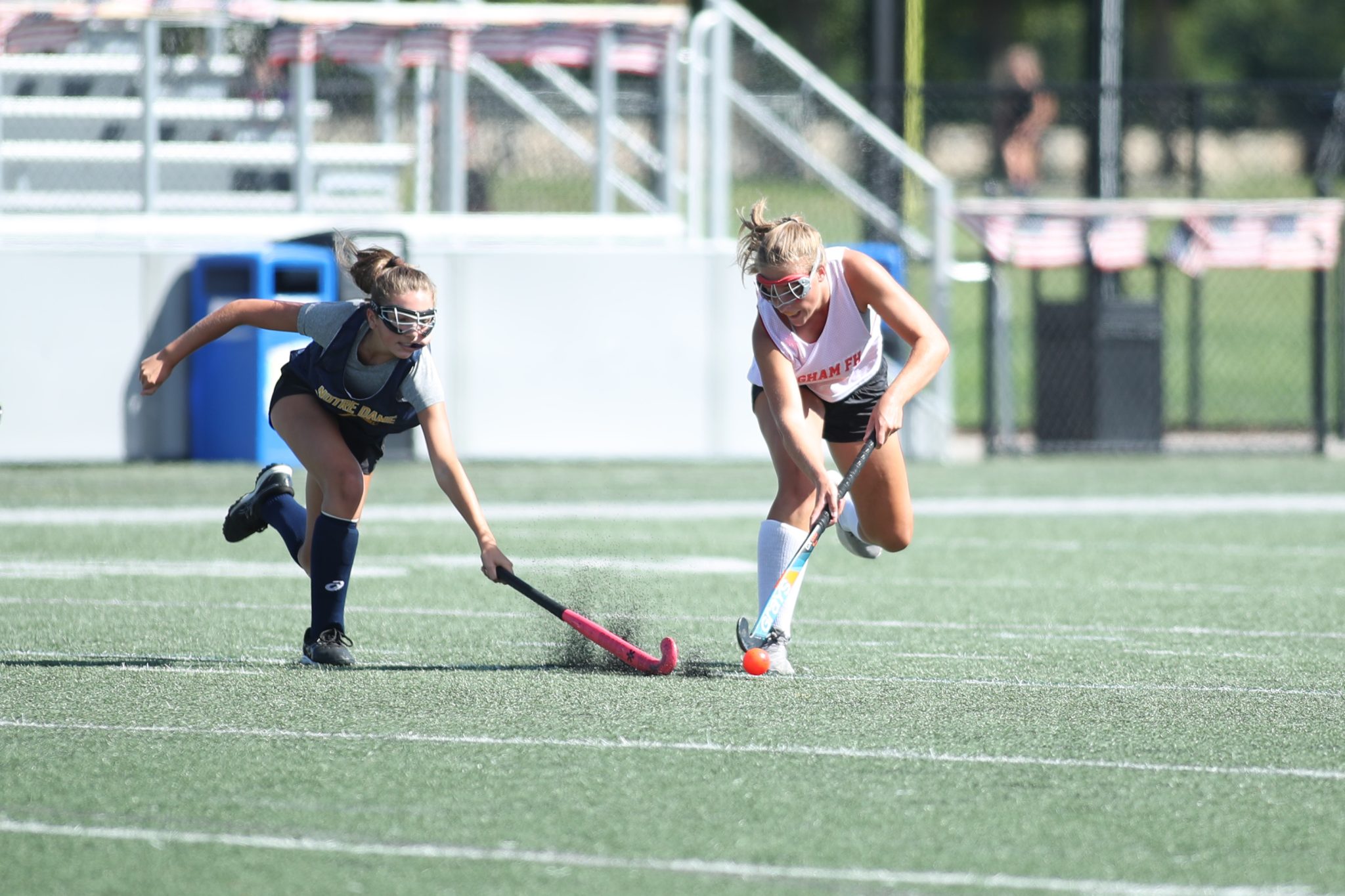 Senior captain Abbey Kennedy moves the ball during a scrimmage with Notre Dame earlier this week.

Building a successful program at the high school level requires many things - good coaching, dedicated athletes, cohesive team, supportive fans, and a strong youth program. Past Hingham High School field hockey teams have been fortunate to have had the first four factors.  This season, however, the years of building a strong town youth program is paying off.

The team graduated 10 seniors last year, most of who were impact players throughout the season.  Big holes to fill for any team in any sport, but any concerns head coach Susan Petrie had are slowly fading away.

“For a crew that there’s the widest range of different age groups we’ve had in a long time, they’re really all getting along, working well together on and off the field, which makes our job easy,” explains Petrie.  “There are 10 seniors, 5 juniors, 5 sophomores, and 5 freshman.  We lost 10 from last year, including our 3 top scorers, and now it seems like the younger players are stepping right up to take their spots, which was a huge concern.  We also lost our 2 starting defenders who started for us for 3 years, so that was a concern for us too.  And again we’ve had new people step in. They were reserves last year and they clearly learned from their teammates and are stepping in and doing a great job.”

The reason that Petrie can utilize more younger players at the varsity level is the fact they are coming into high school not only familiar, but quite good at the sport.  Not too long ago, kids started playing field hockey when they were freshman.  Things have changed over the past 5 years or so and now the high school team is benefiting from it.

“Amazing,” she blurts out before the question is even finished about the youth program. “I feel like she doesn’t get enough credit, Emily Kelly (head of Hingham youth field hockey).  We started with little clinics years and years ago and Emily Kelly deserves so much credit.  She took that program and ran with it.  Her oldest is the same age as this year’s freshmen and this group is really into field hockey.  She has just done an incredible job.  She went out there and somehow found every parent in Hingham who had field hockey background and got them to coach.  We are really benefitting from it.  We are not teaching the game in 9th grade anymore.  These kids have years of experience and we can work on things we’ve never been able to work on this early in the season in past.  Usually I’m learning everyone’s names, but I’ve known these freshman since they were doing clinics in first and second grade.”

Senior captains Abbey Kennedy, Ellie Savitscus, and Julia Glennon agree that the younger players are already having an impact on the team.

“We have good chemistry already, the upper classmen are really pushing the freshmen to play better and the freshman are pushing us to play better too,” says Kennedy.  “We’re doing good right now. We’re 4-0-1 (in the preseason).”

“We lost a lot of good seniors,” adds Savitscus.  “But we have many highly skilled freshman and sophomore players, including (2nd year varsity player sophomore) Haylen Wilson, who is taking after her sisters (former captains) Kyle and Kenzie.  She’s doing really well with her reverses and getting it into the circle.  I think that our freshman forwards and our senior forwards will be able to have the same standards as we did last year.”

Those standards are pretty high considering the success of last year’s team, who started off undefeated and ended up earning a first round home playoff game, which they unfortunately lost to Doherty.  The team is looking to build off last year’s successes.

“We want to win Patriot League,” Glennon states. “It’s definitely our goal.  We want to go further in the tournament this year and win as many games as we can.”

Identifying and working on areas of improvement are key in getting them to reach their goals.

“There are some specific sides of the field we have been working on,” Glennon says. “Working on chemistry and knowing where each other is on the field.  Working on corners a little bit more too.”

With lots of new faces around, Petrie credits the leadership of her captains for cohesiveness of the teams.

“I have to give a lot of credit to the captains too,” she says. “Ellie, Abbey, and Julia have done a nice job.  Again, they had the challenge of coming off a successful season, losing a lot of our talent and then bringing in a whole new group.  Some were coming from JV, some came right from freshmen, some came from 8th grade and making it one cohesive group.  I mean, we haven't even started the season yet and you see they all hang out together.”

Spending more time together goes hand-in-hand with having more experienced underclassmen in the program allowing them to practice as a program and not individual teams.

“Our JV A and JV B teams are really talented this year and it’s been nice to practice together,” Petrie goes on to say. “JV A is pushing Varsity and JV B is pushing JV A.  So for once, they are so similar in skill level that it’s really benefiting everyone in the program.”