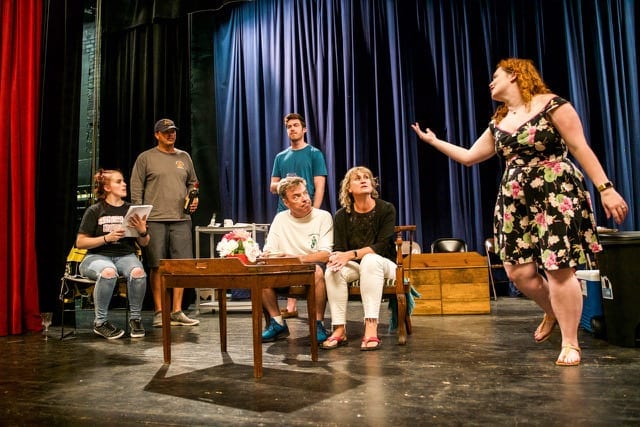 The world premiere of a musical play is a rare thing. But Hingham Civic Music Theatre gives audiences a chance to see a brand new production—“The Annulment,” by Plymouth-based playwright Sheila Kelleher—this Friday and Saturday, Aug. 23 and 24.

On those two nights only, at 7:30 p.m., “The Annulment” is being presented at Hingham Civic’s home stage: Sanborn Auditorium on the second floor of Hingham Town Hall, 210 Central St.

Kelleher, who also composed songs for the play and serves as its director, modeled the story on her own experiences with the annulment of her marriage—some funny, others quite poignant. (The Catholic Church’s convoluted annulment process allows divorced couples to remarry in the Church.) But Kelleher’s cast of seven make the years-long tale of a failing marriage work well as musical drama.

Quincy’s Carole Shannon, who previously played Belle in Hingham Civic’s production of “Beauty and the Beast,” is Celia Russo. The annulment that follows her divorce from Tony (Norwell’s Charlie McKitrick) sparks the play’s action. That is accomplished through a flashback review of how Celia and Tony—whose main outside contacts are two friendly couples—have come to the point of dissolving their marriage.

A series of songs, from Celia’s charming “When I Used to Sing” and “What We Missed,” to Tony’s clueless “I’m Doing Everything Right,” color the action and help develop the characters by lyrical means. “Bow Chicka Bow Bow” lets friend Nadine (Roxbury’s Stephanie Blood) show off the “mating call” that keeps her close to husband Dave (Yarmouthport’s James Swindler.) The third couple in the play are Plymouth’s Deanna Lohnes and Weymouth’s Brian Hurley, as Sabrina and Jeff.

According to John Ferguson, music director for the show, the songs span a range of styles, including ragtime, cabaret and pop and rock. “The variety highlights the complexity and differences among the human relationships,” he says. One other humorous number, “Religious Misdirection,” features a priest, explaining to Celia why annulment makes sense from the standpoint of the Church.

Kelleher says she drew some musical cues for Celia from the Broadway albums of the composer’s youth—especially Julie Andrews’s songs in such productions as “Camelot,” “My Fair Lady” and “The Sound of Music.” (Such shows, she adds, later in her life also communicated a sense of the illusions of love--the fantasized kind often portrayed on stage and screen.)

The Church’s influence in Kelleher’s story is also powerful, of course. Her own annulment experience exposed her to “an irrelevant process,” and “caused a lot of anxiety and stress reliving the pain of feeling insignificant and unwanted.” According to Kelleher, “The Catholic Church is so hypocritical, it’s hard not to see humor in the disparity between what it preaches and what it practices,”

The show is produced by Pat Sherman, with Hingham’s Joel Leonard assisting. Nathan Fogg is technical director and Catherine Umano is choreographer. Tickets are $25, $20 for seniors and teens, and may be purchased through the website http://hcmtannulment.bpt.me, or calling 781-749-3400. They also are available at the door. For groups of 10 or more, seats are $18 each.

Roy Harris, a former Wall Street Journal reporter and editor living in the World’s End area of Hingham since 1996, has acted in various Hingham Civic Music shows over the past 16 years.