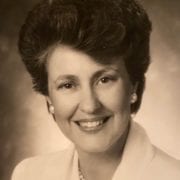 Edna Mae (Soraghan) English of Hingham passed to eternal life, surrounded by her family, on Friday, October 2, 2020 after a brief period of declining health but a long and well lived life.

Edna is well-known as a public figure having served 16 years on the Hingham School Committee, 6 years as Selectman, and decades as a Trustee of the Hingham Public Library.  She is less well known as a successful business woman, academic, docent and devout Francophile.

Edna and her husband Bill moved to Hingham in 1962 to raise their Family. Both quickly became involved in public life, joining the Hingham Republican Town Committee and embarking on a lifelong commitment to the betterment of Hingham. Edna, in addition to her elected offices, served on a number of Town Committees notably the Main/High St Traffic Light Committee, the Government Study Committee and as a representative from Hingham to the Massachusetts Area Planning Committee.  For her loyal commitment to Hingham she was recognized as its Citizen of the Year in 1997.

As active as Edna was with her public life she was a volunteer and benefactor to many Hingham institutions including the Hingham Public Library, The South Shore Conservatory, Hingham Historical Society and the Resurrection Parish where she was a Minister of the Word.

In her business life Edna was the Treasurer and Clerk of the Corporation for Sturtevant Inc. and the Founder and Principal of Advance Communications a media marketing company.

A graduate of Regis College, Edna was a Fulbright Scholar attending the Sorbonne University in Paris from which she received a “Brevet de Langue Francaise”.  Upon her return to the United States she began her work life as a French teacher.  Edna remained close to her Alma Mater serving as the co-president of her class and providing counsel to young women considering this exceptional school.  Her devotion to Regis is only outdone by her devotion to all things French a passion she indulged with frequent trips to France and participation in the Hingham French Ladies Luncheon Group.

In her spare time Edna indulged her wanderlust, and her firm belief in the saying of Mark Twain that “travel is fatal to prejudice, bigotry, and narrow-mindedness…,” visiting nearly every country on earth. More locally, she was often at the Hingham Yacht Club or the Cohasset Golf Club where she was an enthusiastic participant in the Niners.

With all of her accomplishments, her most cherished roles were with her Family.  She was the devoted daughter of the late Edna (Regan) and Edward Soraghan of Braintree. She was the beloved wife of Bill English for 58 years. The eldest sister to Jack Soraghan of Dover, the late Cathy Murphy of Sherborn and wee Alice Poirier of Hudson.  She is missed beyond the ability of words to express by her five children, Sturt English and his wife Ellen of Hingham, Cathy Dolphyn of Weymouth, Laura Marwill and her husband Roger of Hingham, Ted English and his wife Jen of Needham, Clayton English and his wife Dr. Nathalie of Houston, TX.  Her grandchildren Kelly Plouffe, Ryen Dolphyn, Joseph Marwill, Kate English, Evan Marwill, Sam Marwill, Georgia English, Teddy English, Remy English, Addison English, Sebastien English and great granddaughter Charlotte Plouffe miss her terribly but remember fondly the Birthday Hat.

Visiting hours will be held 4-7 on Tuesday, October 6 at the Pyne Keohane Funeral Home, located at 21 Emerald Street in Hingham. The funeral and interment will be private.

In lieu of flowers, it was Edna’s wish that gifts be made to either the Hingham Public Library, located on Leavitt St. in Hingham, or Glastonbury Abbey, located on Hull Street in Hingham.