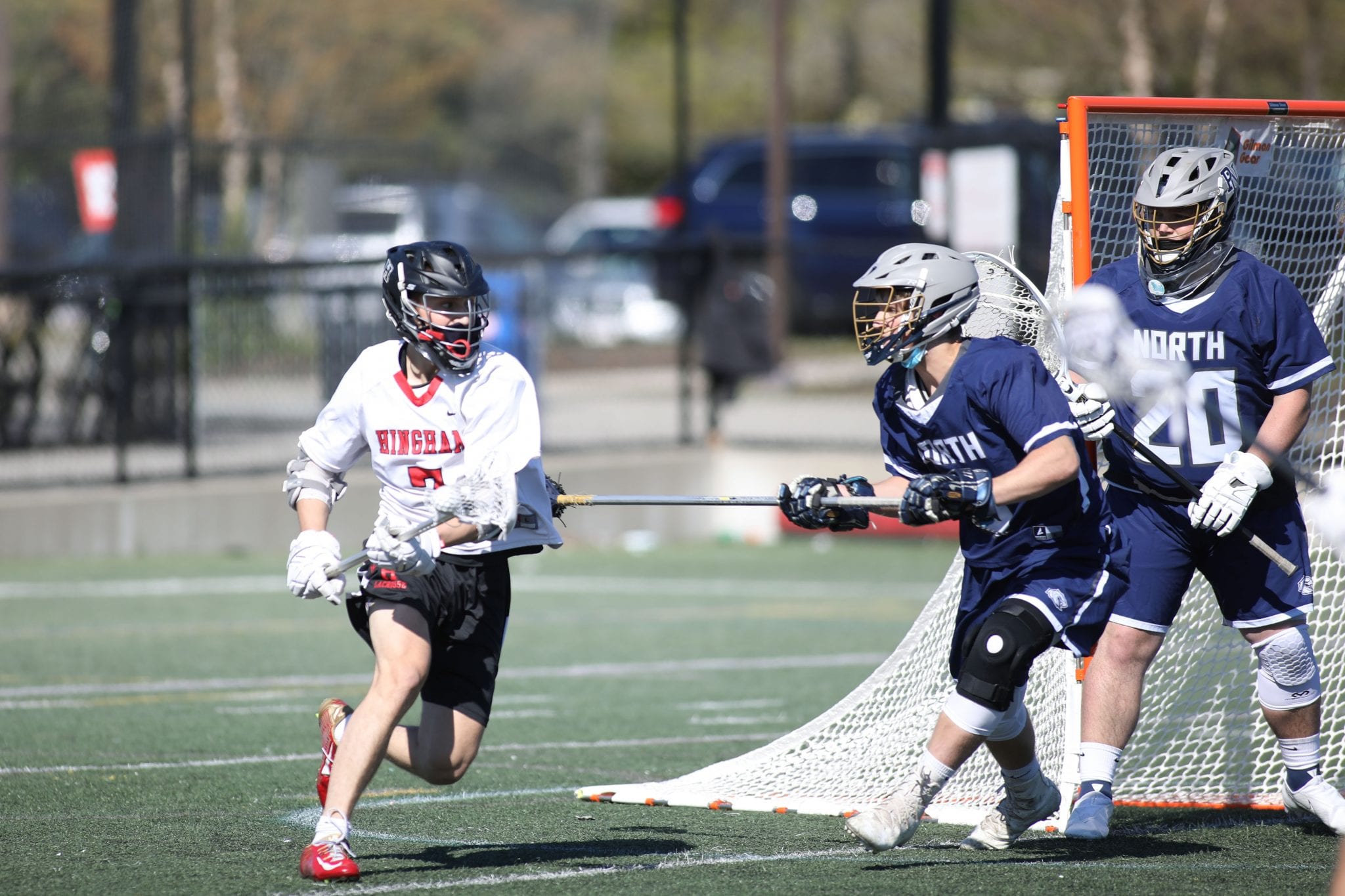 Senior Lars Osterberg had 4 goals in the season opener.

For the first time in nearly two years, the Hingham boys lacrosse team took the field against Plymouth North. Recent developments in Covid-19 protocol have allowed spring sports to start up again at the high school, and the fields were busy with teams holding practices. As a result, the bleachers were packed with family and classmates watching the game under the warm spring weather.

Hingham came out swinging in this one-sided matchup. Freshman Rocco Egan took the face-off for Hingham and won it relatively easily. The Harbormen set up in the offensive zone, starting the passing cycle and looking for a scoring opportunity. They did not have to wait long. Hingham's Connor Hartman took a one-on-one and had an opportunity on Plymouth North’s goalie Teddy Golden. The shot was blocked, but an immediate turnover gave Hingham the ball behind the net. Senior Paul Forbes scored from here in style, executing a beautiful no-look, over-the-shoulder shot that hit the top corner of the goal and brought sounds of awe from the student section.

This was less than a minute into the game, and less than a minute later Hingham scored again on yet another flashy goal. Egan once again won the face-off easily. Hingham’s Alex Rabschnuk took a shot that rebounded and found its way back to senior Lars Osterberg, giving him the bouncer opportunity that snuck past Golden. Less than twenty seconds later, Forbes took the ball after the face-off and stepped up with a ripped shot that bounced in off the post. Shortly after, Hingham’s Owen Hoffman followed up the scorestreak with one of his own, a long snipe that caught the top corner. Junior Henry Crean brought in yet another score on another long shot, making it 5-0 just three minutes into the game.

The first face-off win for Plymouth North led to nothing, as sophomore Ben Rakauskas was stalwart on defense and forced a turnover. This resulted in yet another Hingham score, and although Plymouth North won the next face-off, a quick turnover and sprint into the offensive zone led to a passing play and score for Hoffman. Some offensive aggression for Hingham gave Osterberg a chance at a bouncing shot, which slipped by Golden’s stick for an 8-0 lead.

A series of turnovers left Hingham with the ball yet again in the offensive zone, scoring the ninth goal with 56 seconds remaining in the quarter. A quick face-off win for Egan set up a beautiful passing play, with Cian Nicholas giving it to Osterberg, who set up Cal Crawford for the tenth and final goal of the quarter.

Hingham went 8-2 on face-offs in the first quarter, aiding their dominant offensive performance. They carried this 80% win rate into the second half, also going 4 for 1. Plymouth North looked as though they would rally at the beginning of the second after a solid offensive possession, but Hingham continued to run away with the game. After setting up the passing formation, Hoffman drove and scored four minutes into the quarter.

Hingham scored again after a face-off win and a wrap-around opportunity resulted in a goal for Osterberg. A sniper-like shot off the face-off resulted in yet another quick goal with less than four minutes left to play in the half. This ended the scoring for the half, Hingham on top 14-0.

The rest of the game was significantly less action-packed than the first half. Hingham put in backup goalie Nathan Hoffman and only 3 goals were scored, all of them for Hingham. In all, Hoffman and Osterberg had four goals, Forbes had three, and Crean and Crawford had two. Throughout the whole game, Hingham outshot Plymouth North 28-3 and won 15 face-offs to Plymouth North’s 5. Hingham’s defense faced only three shots, all of which were saved by Nathan Hoffman or Sam Bellomy. Head Coach John Todd was very pleased with his team’s performance. “We’re happy to be out here,” he said gratefully. Todd emphasized the importance of this first win, which he hopes will, “set the tone so that we’re ready to have a great season, and play competitively and take care of business.”

The long stretch since their last matchup was a source of motivation for the Harbormen. “These guys are just fired up and ready to play,” agreed Todd, “getting a victory is why we’re here, playing together, playing hard, and getting better with each opportunity [and] each shift” 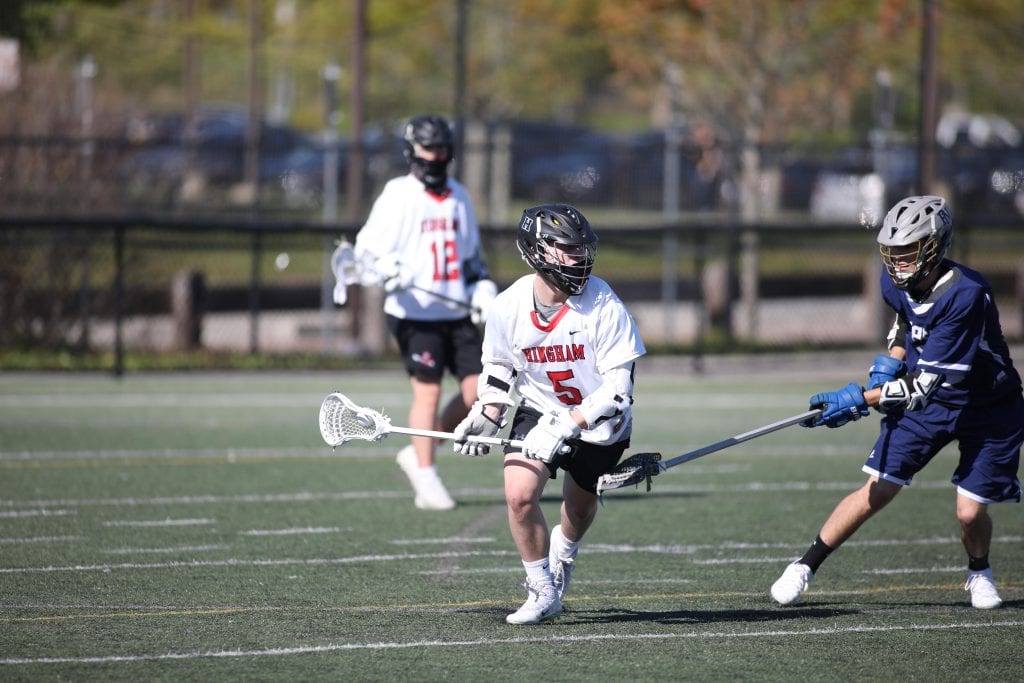 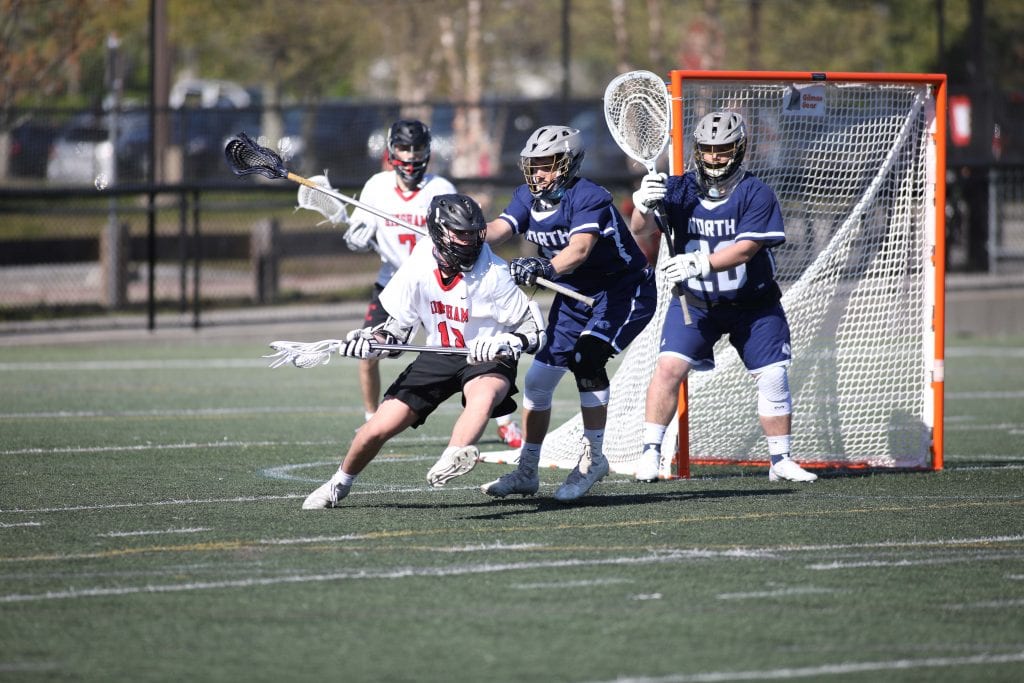 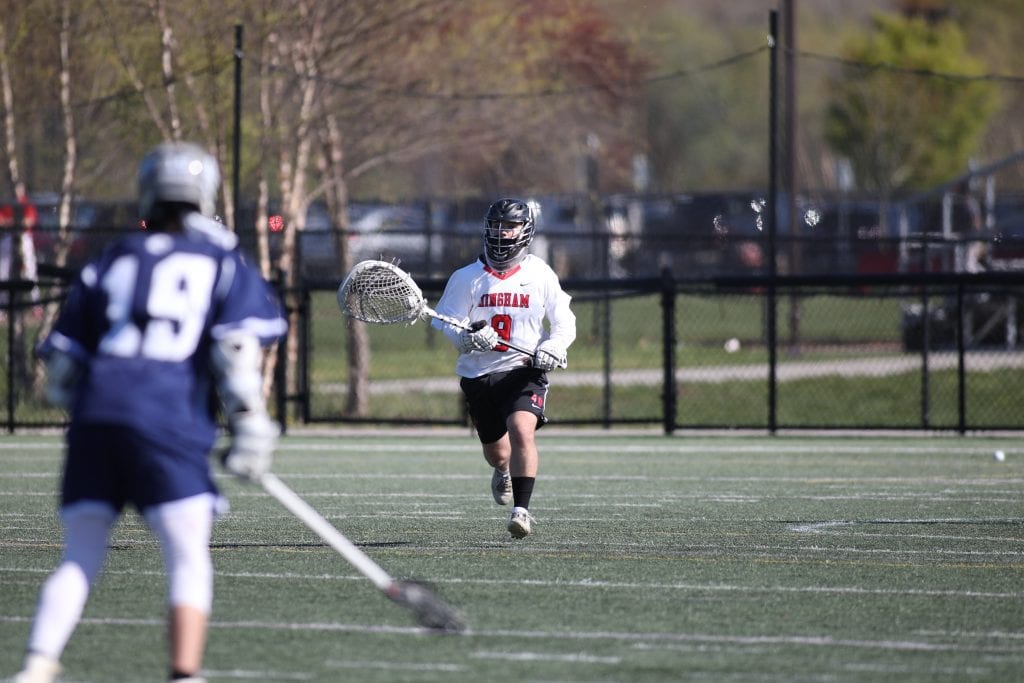 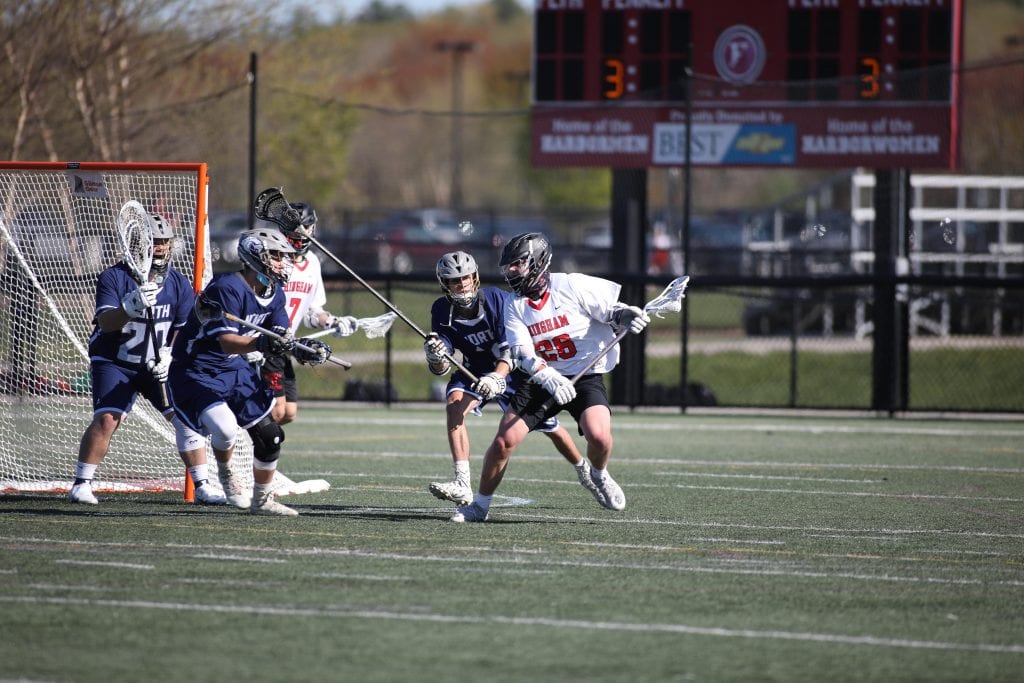 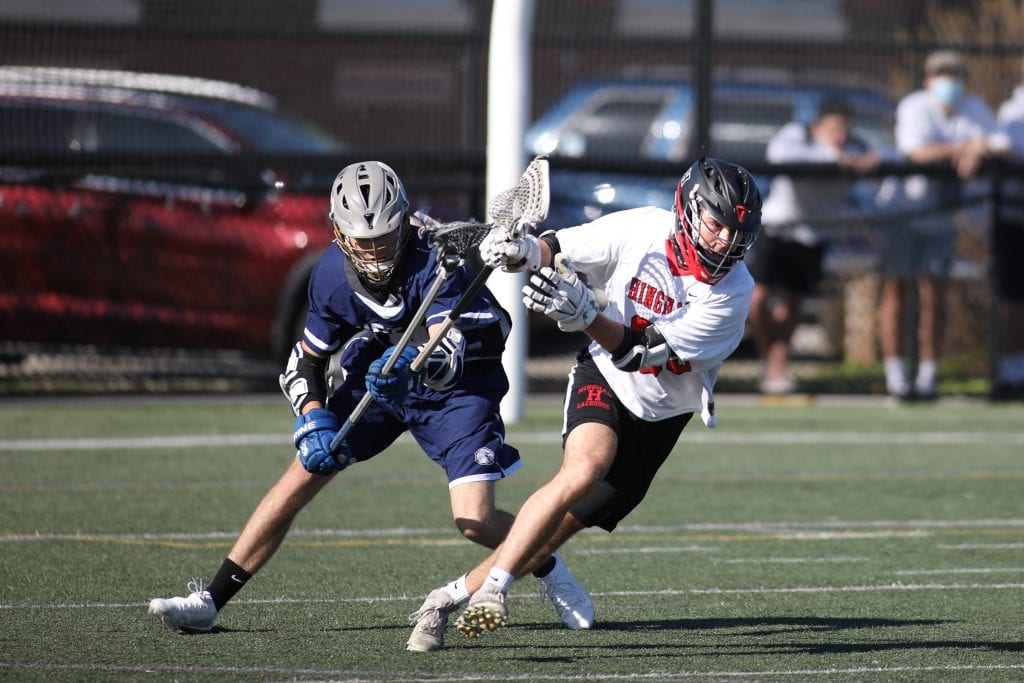 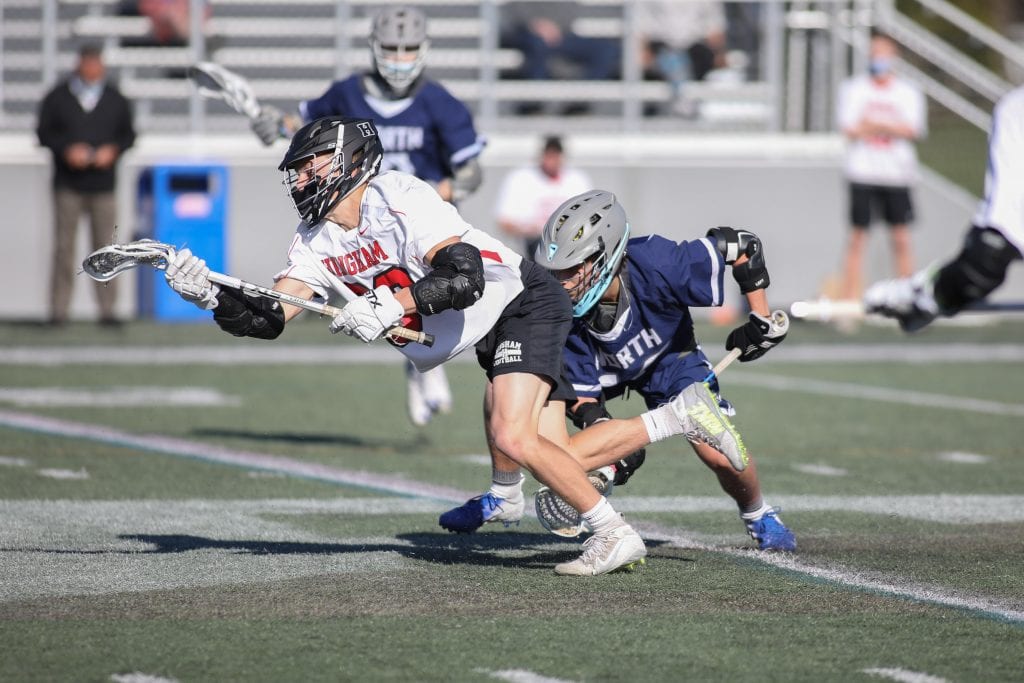 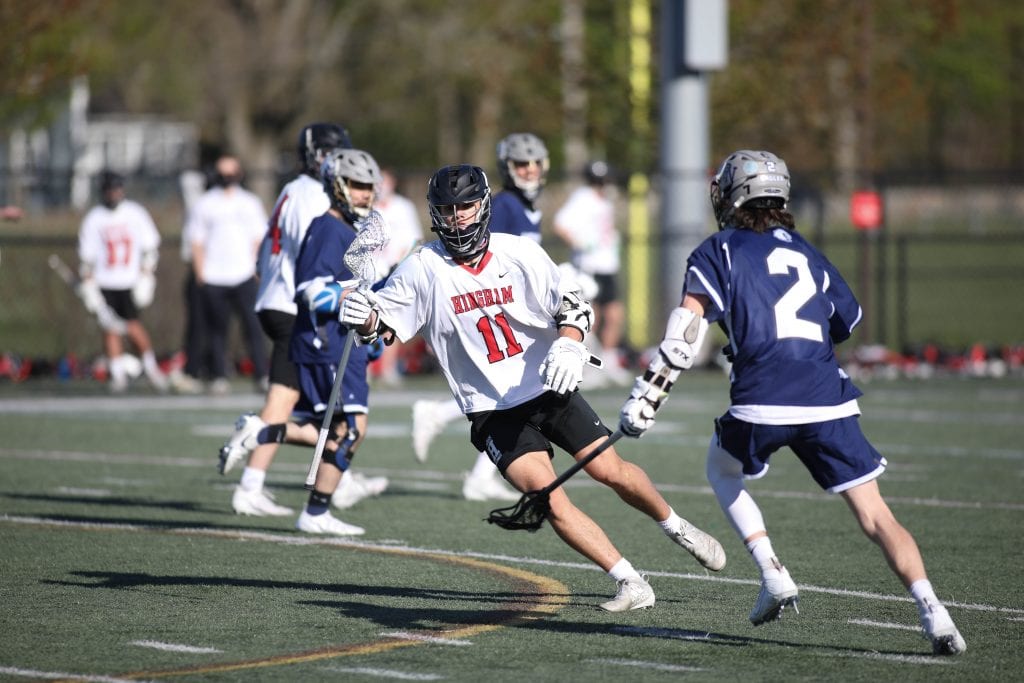 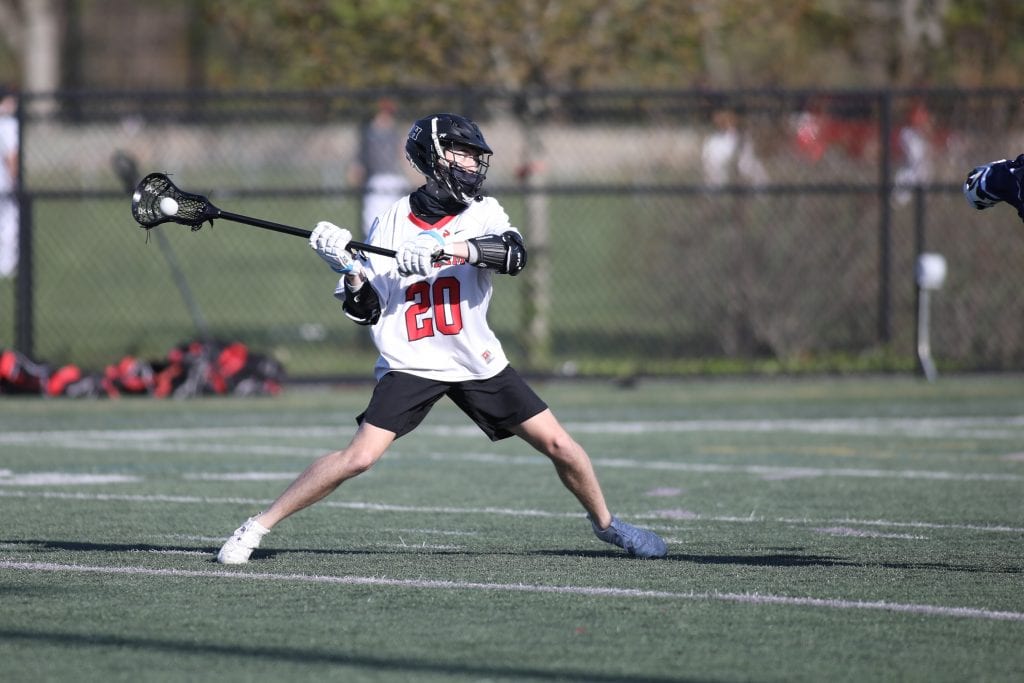