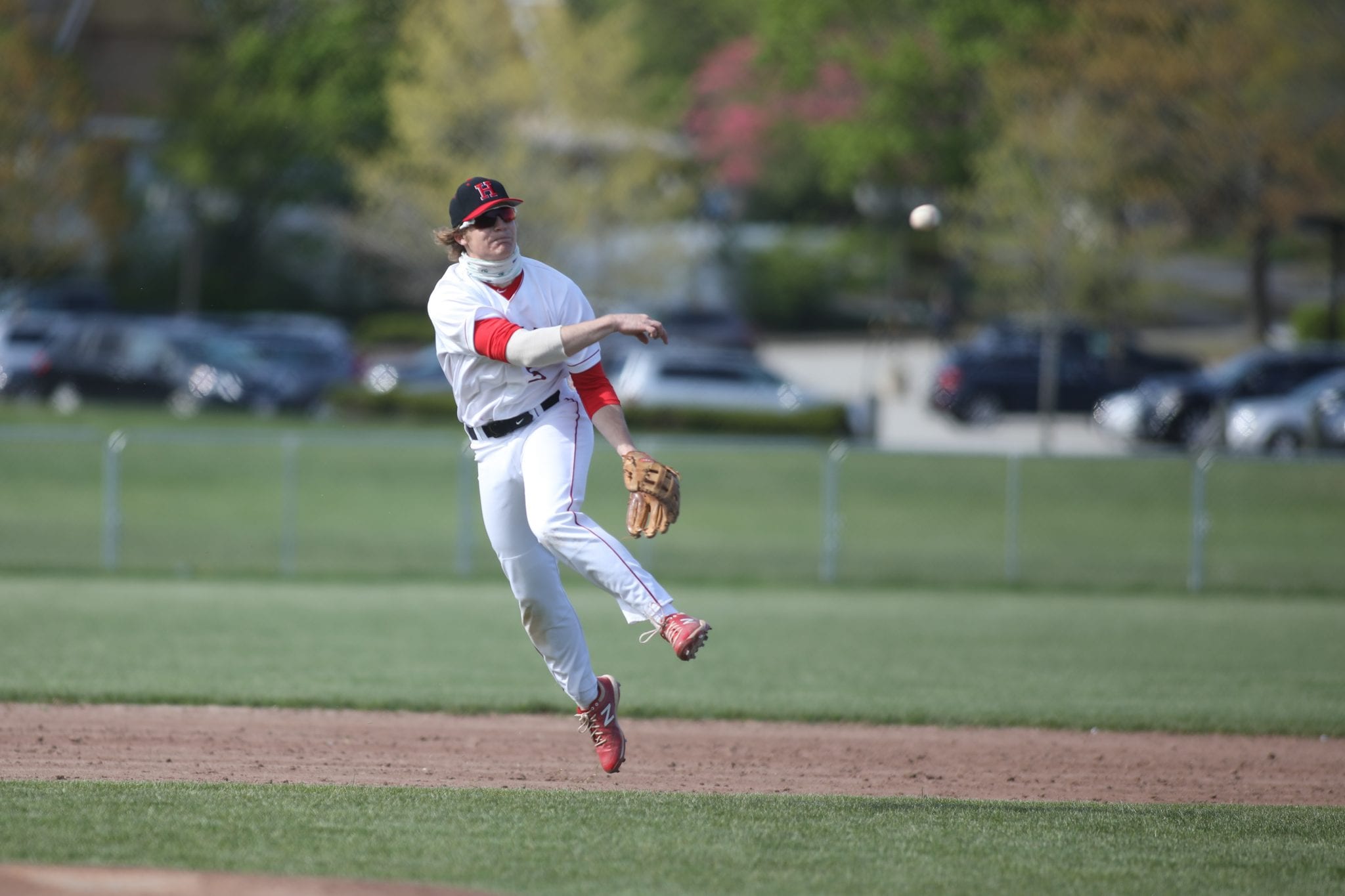 Senior captain Andrew McGowan fires it over to first base early in the game.

Harbormen baseball started the season off with a win in their home game against Marshfield. On a beautiful but chilly Friday afternoon, the boys took the field after not competing for over a year. “It's good to be back out here, I’ll tell you that,” commented Head Coach Frank Niles.

Hingham got off to a slow start against the Rams. Marshfield loaded the bases in the first inning off of pitching errors. However, Hingham assembled a secure defensive effort to get off the field after just one run. The Harbormen offense was significantly better than their defense, and on the first pitch, a long ball out to left field put a runner on second. However, he was tagged out running to third on a line drive, and Marshfield retired the side up 1-0.

Hingham found defensive troubles in the second inning. A bad throw from shortstop put a Ram on first, and he immediately stole second successfully. Another miss-played ground ball scored the man on second. A hit and a walk filled up the bases yet again before a grounder retired the side. Junior Bobby Falvey started off the inning for Hingham with a fly ball to right field and another grounder to put two on base. A double play on a ground ball slowed down Hingham’s offensive effort, and a ground ball hit to third base was thrown to first to end the inning. Niles was not pleased with the team’s early defense, but he remained optimistic, “I think there were a little bit of early jitters from guys, we were capable of making those plays of course.”

Hingham regained their defense in the third inning while launching an attack of their own. This was the start of a long comeback, with Hingham scoring three runs to make it 4-3. Pop flies ended Marshfield’s at-bat, and Hingham took advantage of the stall in their opponent's game. A ground ball followed by two walks loaded the bases with just one out. A grounder that snuck into the outfield brought home two runners. A bobbled ground ball brought the runner on third home, but a pop fly retired the inning.

The fourth inning found little offense for both teams, but the fifth inning tied the game for Hingham. A lackluster at-bat for Marshfield gave Hingham momentum, and they loaded the bases yet again. Pitching errors and walks scored one man to tie it 4-4, but a strikeout and a grounder to third base ended the inning in unfortunate fashion for the Harbormen.

Ground balls and sacrifice bunts advanced runners for Marshfield in the top of the 6th, scoring one and retaking the lead. However, Hingham responded similarly and started putting men on bases through ground balls and defensive mistakes. Sacrifice bunts advanced runners into scoring positions for Jonathan St. Ainge’s at-bat. The Hingham junior hit a towering ball to center field that bounced over the fence, resulting in a ground-rule double. More routine errors for Marshfield’s infield scored two more that inning, finally retiring the inning down 8-5.

Hingham, with the first lead of the game, ended the game perfectly. Hingham’s pitching, although shaky early on, was reinforced with a stint by senior Declan Flynn and closed by junior John Volpe. Volpe pitched the last inning with just eight pitches, striking out two men before forcing an easy grounder for his infield. This retired Marshfield’s side, and with Hingham in the lead, the game was over.

Niles was both skeptical and proud of his team after the win. “I was expecting us to try to play like us, the way we’re capable of,” he noted, “it took us a little bit but we got there….in the clutch we hit balls real hard to win the game.” Niles outlined his game plan for the rest of the season, mentioning, “It’s a journey, it's not a destination. We have to play consistently….stop chasing all over the place and make routine plays.'' Looking forward, Niles announced that, “we have a lot of work to do but we’ll keep plugging away”.

Hingham was right back at on Saturday at East Bridgewater.  The Harbormen, behind outstanding pitching from sophomore Jake Schulte (6IP, 1ER, 0BB, 5Ks), won 4-3.  Next game is Monday at home vs. Whitman-Hanson. Click here for more information about Hingham varsity baseball. 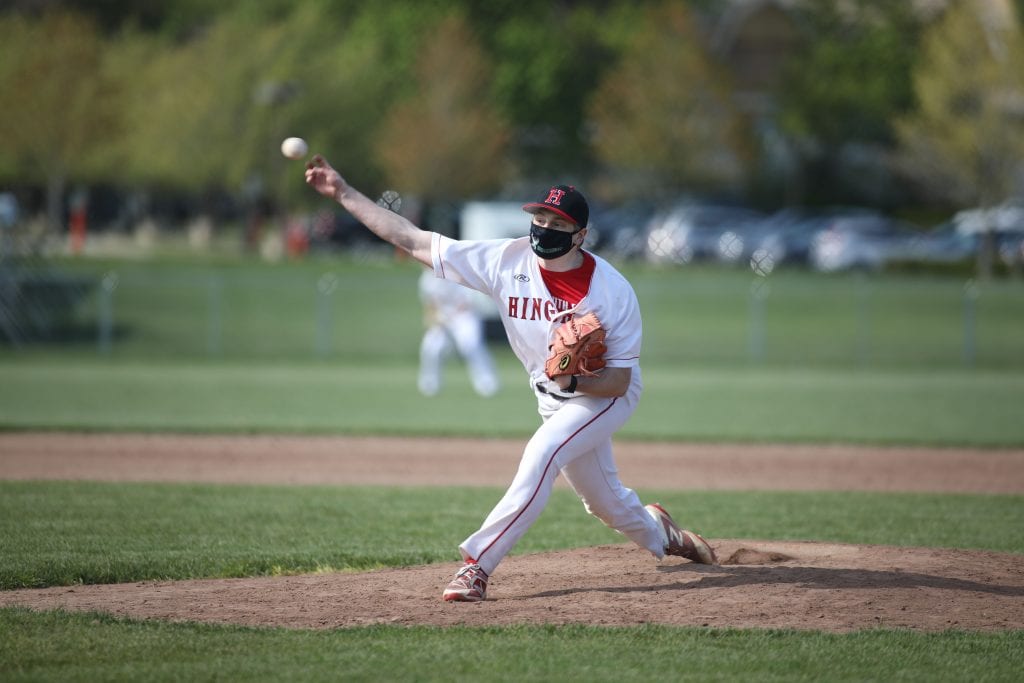 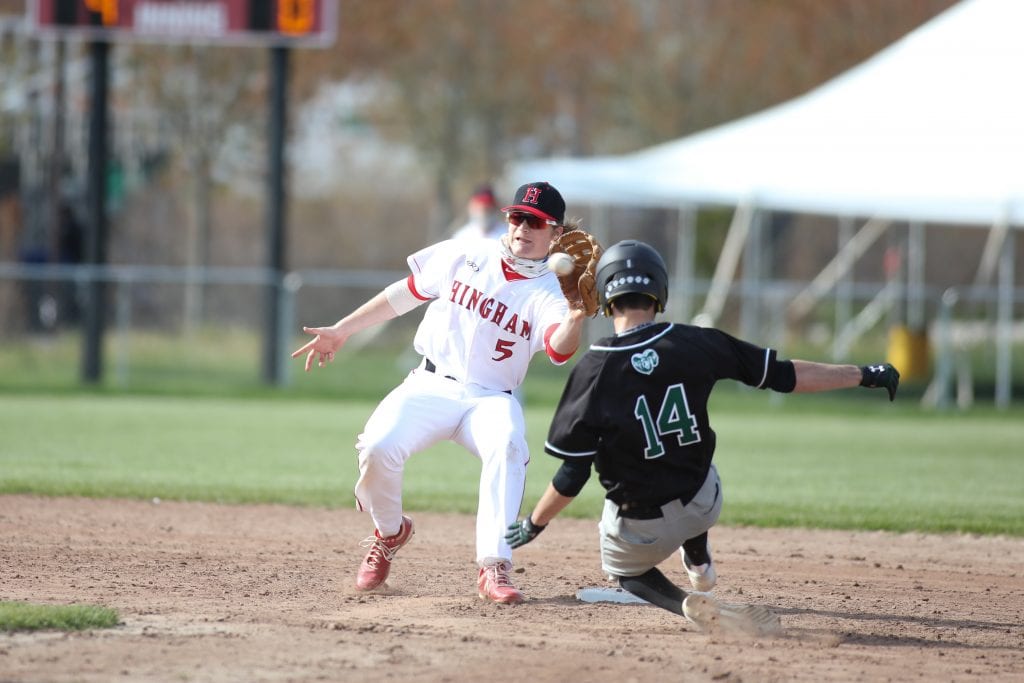 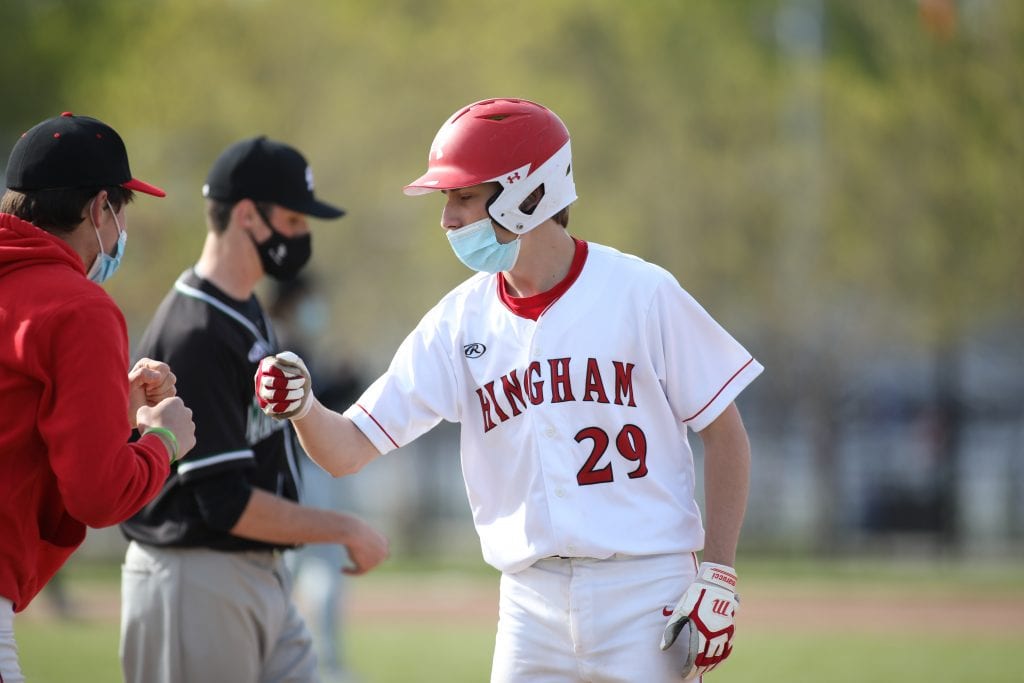 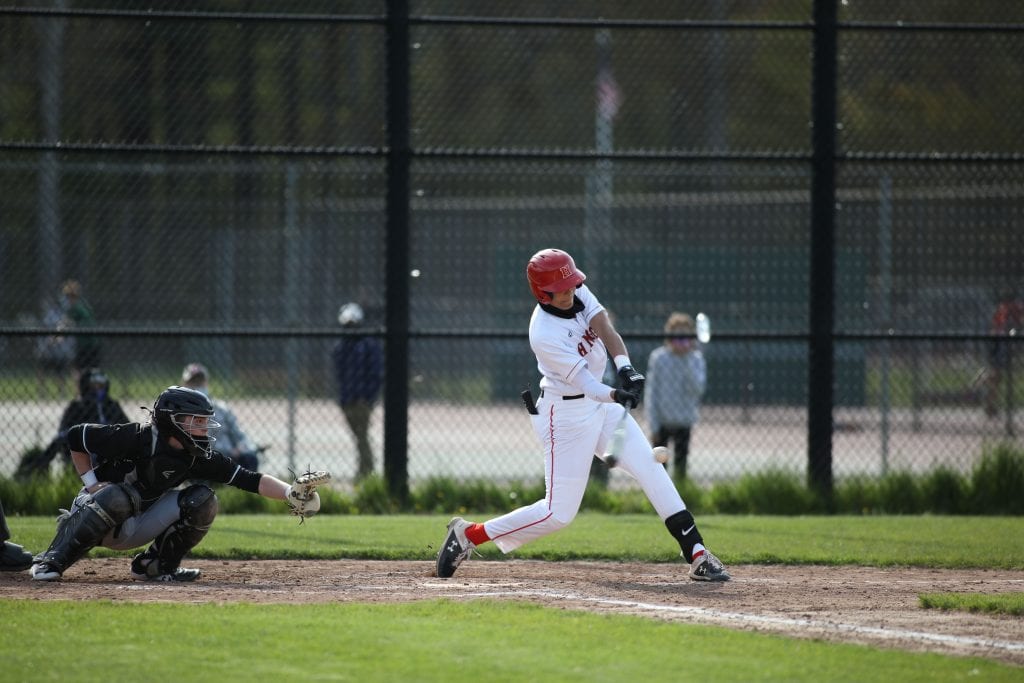 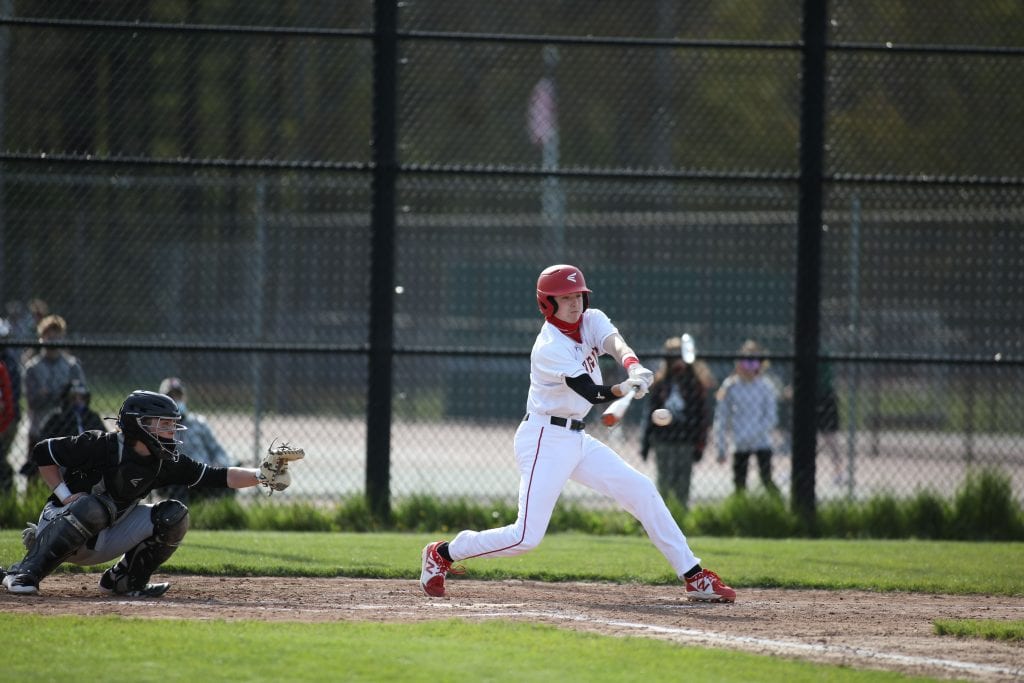