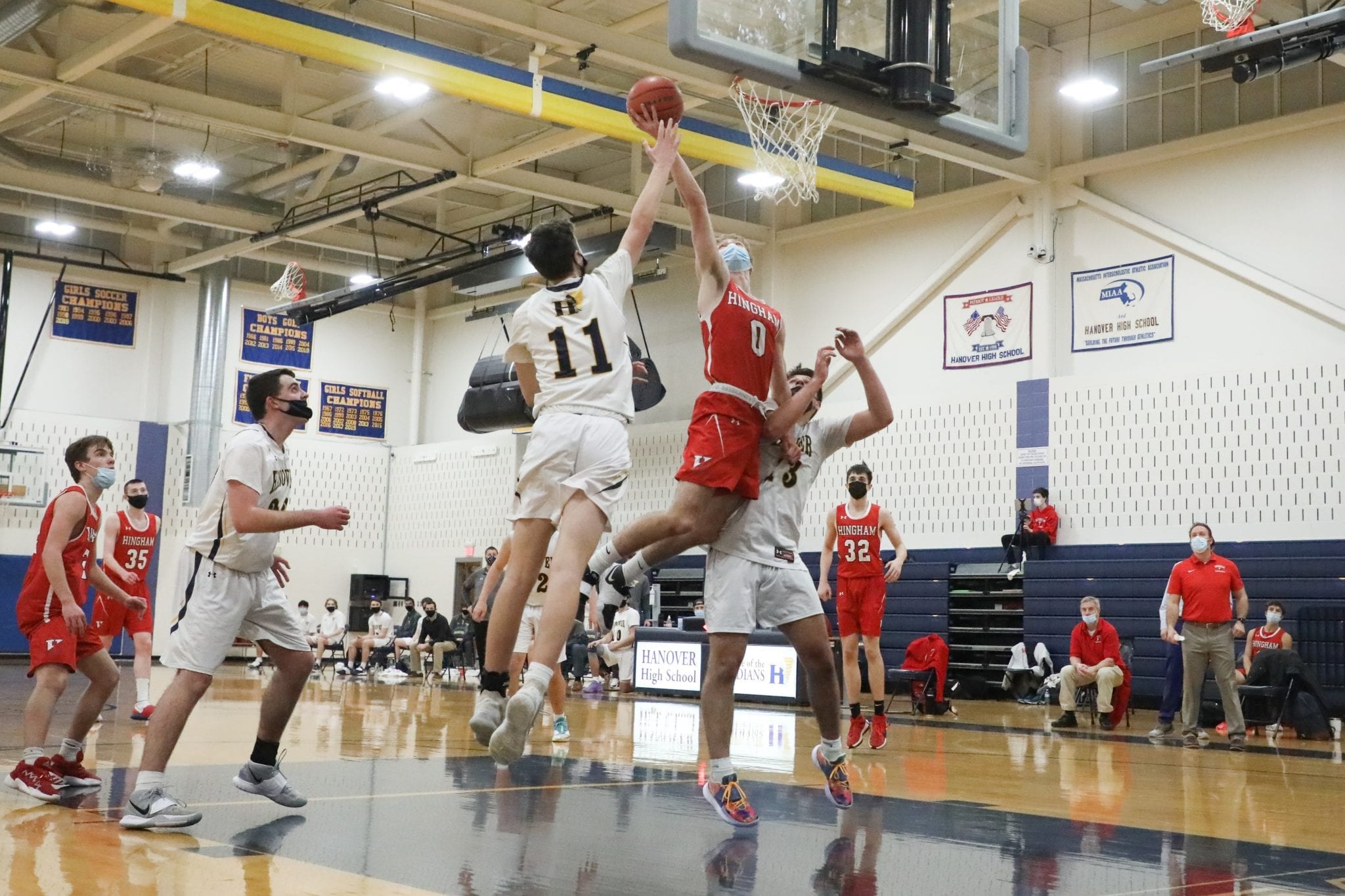 Senior captain Jack Hurley soars through the lane to tip in a rebound help to secure the victory for Hingham.

The Harbormen came out of the gate with a ton of energy and effort and never let their foot off the gas in their first game of the Patriot Cup playoffs.  As the second seed in the Keenan division, Hingham earned a bye and faced-off Fisher division top seed Hanover in the second round in Hanover on Friday night.

Hingham jumped out to an early 9-2 lead to open the game.  The Hawks settled in a bit and cut it to 2 points at 11-9.  That was closest Hanover got the Harbormen for the rest of the game.  Hingham came right back on two quick layups from senior captain Jack Hurley and one from junior Nick Johannes and built their lead right back up.  They end the first quarter with a 20-11 lead.

In the second quarter, Hingham started to spread the ball around and clamp down on defense.  Seven different Harbormen scored in the quarter and senior Andrew Teague made some great hustle plays on defense to extend their lead to 40-27 at half time.  The third quarter saw much of the same as Hingham only allowed 6 points and Hurley and Johannes continued to get baskets in the paint.  Senior Jack McBride took over in the forth quarter, for the second game in a row, leading the team with 7 points (14 for the game) and securing the 66-47 victory.

“My teammates really set me up,” McBride tells the Anchor. “I was able to attack the gaps and hit some open shots.  We just wanted to come out here and play our game and I think that’s what we did. We executed well and won by a lot.  It was a great win.”

Head coach Bob Kniffen likes was he has seen from McBride the last few games.

“That’s back to back games that he (McBride) has led us,” Kniffen says. “He’s starting to fill in a very important roll.  I am very impressed where he’s come this year.  He’s a senior and has filled different rolls.  He comes to practice and works hard everyday and now that’s paying dividends and it’s shown in the past couple of game.”

Kniffen was happy with not only his team’s performance, but the fact they got to play in front of a “crowd” as the parents and families of the the away players are allowed at playoff games.

“It was a little different look for tournament basketball, but it feels the same,” he says. “That was exciting.  You could feel the energy from both teams and both benches.  It was our highest attended game of the season with both sides getting fans and it was certainly an exciting game against a great team, a league champion, and it’s great to get a win on the road to start off the tournament.”

When asked about the team’s intensity throughout the game, Kniffen responded by saying “that’s a testament to not only the guys on the court, but also on the bench.  The mentality going in was we need to bring the energy and we did tonight. We got going right away and were able to keep it up for 32 minutes.”

The Harbormen’s next game will be on Thursday against an opponent TBD. 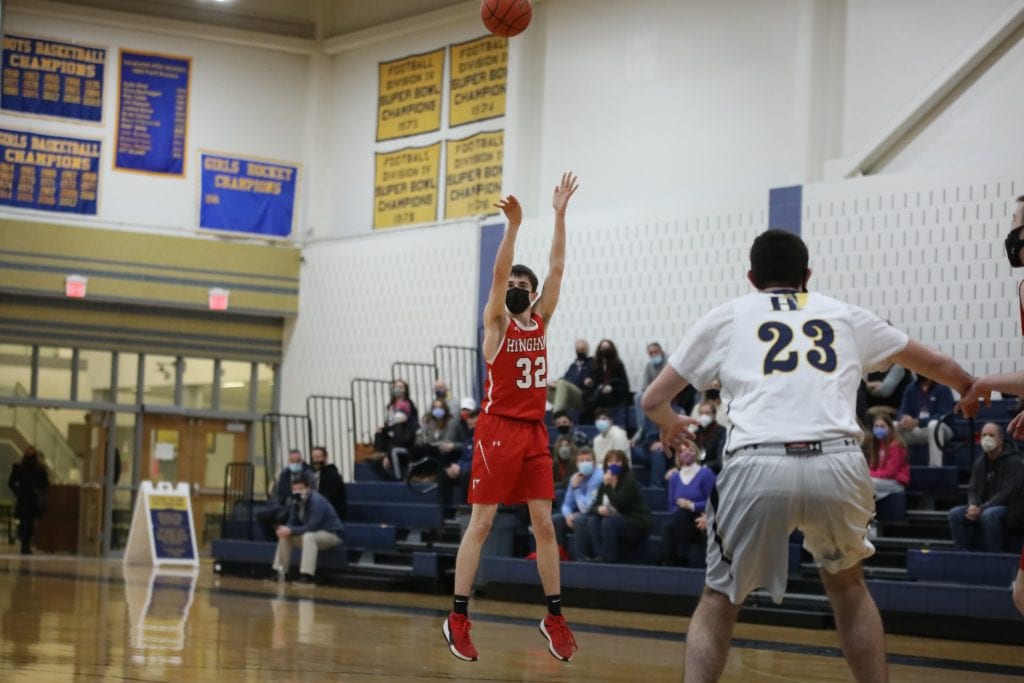 Sophomore Liam McBride with one of his three 3-pointers in the game. 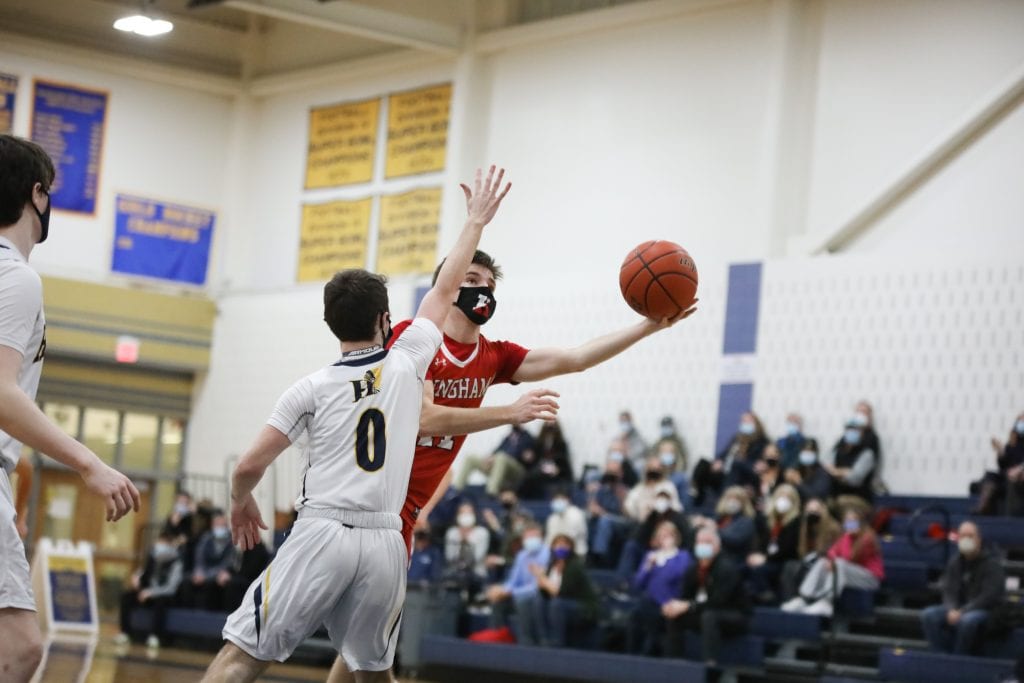 Senior Andrew Teague goes for a layup after stealing the ball. 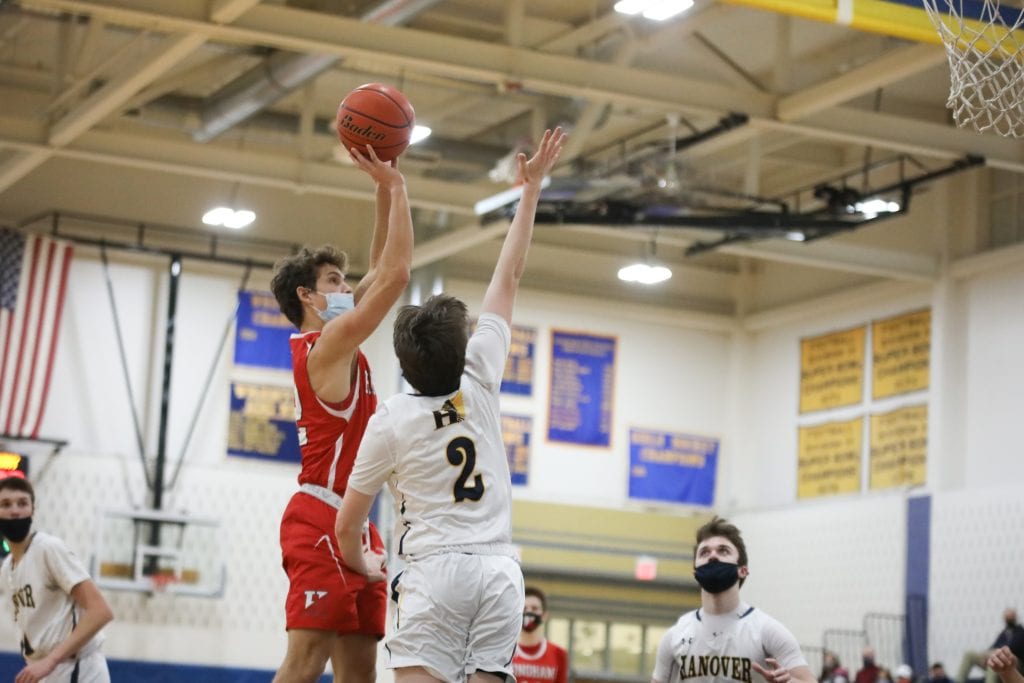 Junior John Sula pulls up for a jump shot. 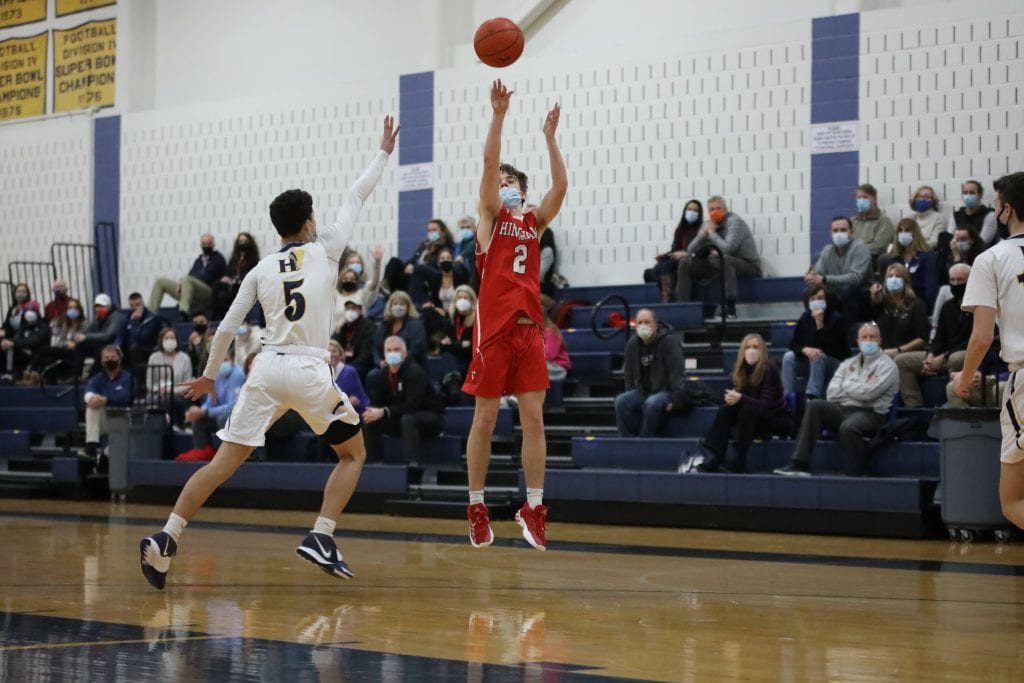 Junior Curtis Murphy buries a three in the second quarter. 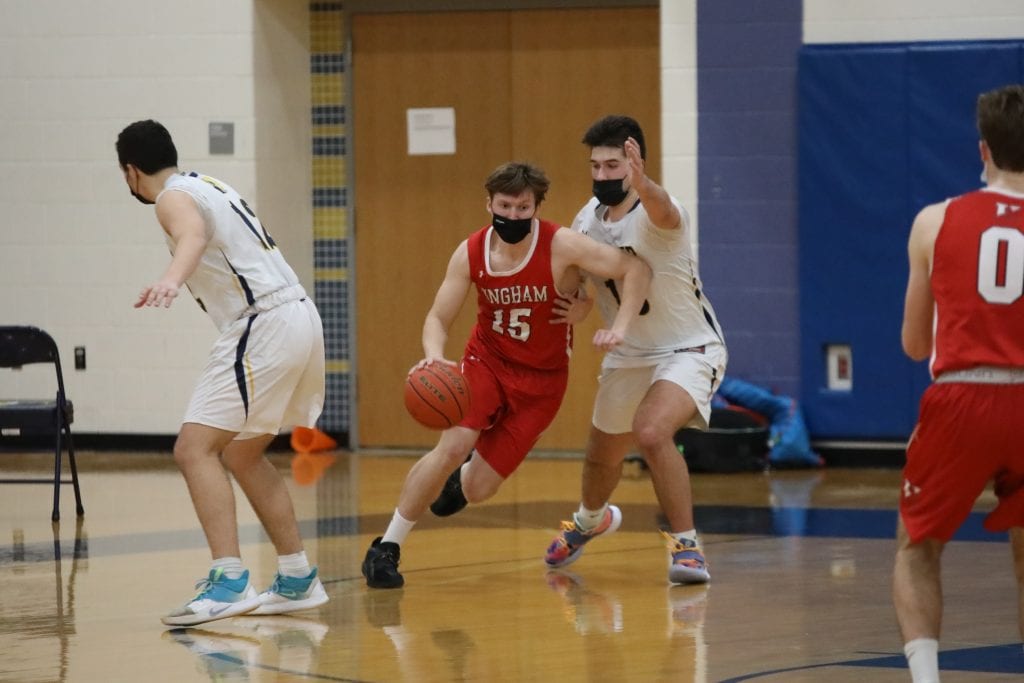 Senior Evan Williams gets around a Hanover defender. 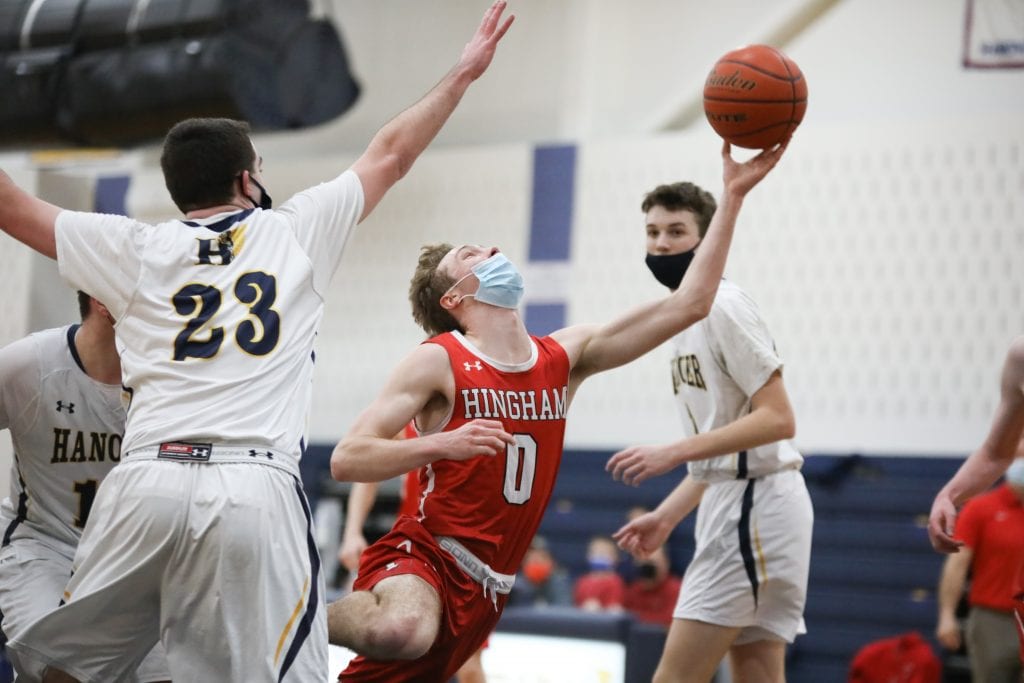 Senior captain Jack Hurley lays in 2 of his 13 points. 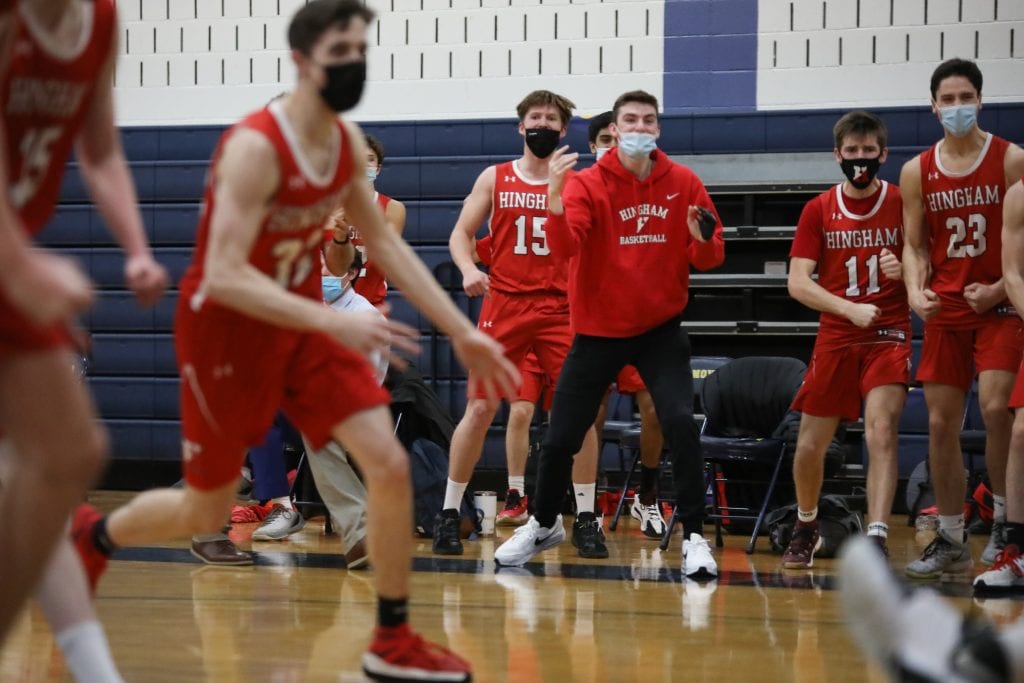 Senior captain Steven White may be sidelined with an injry, but he is still playing a huge roll in the teams success from the bench. 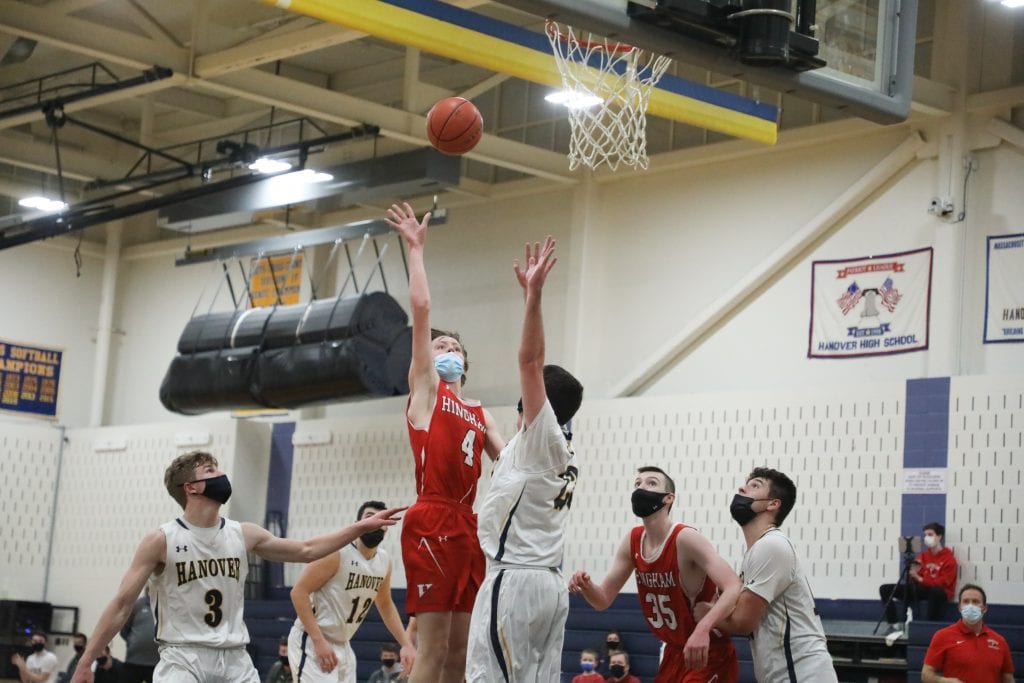 Junior Nick Johannes had 12 in the game including this floater. 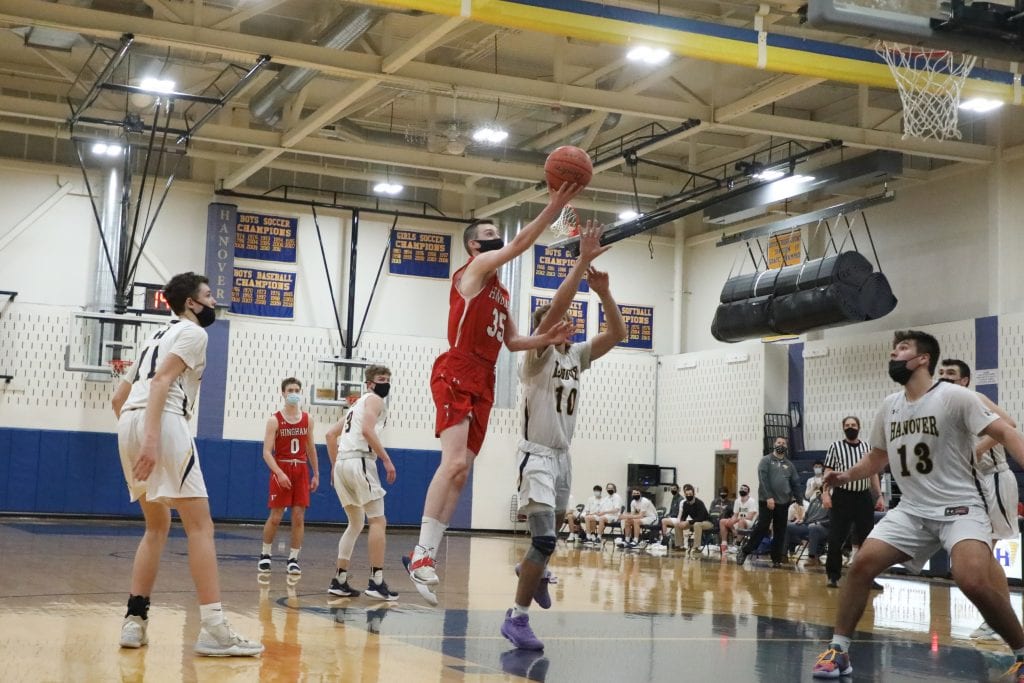 Senior Connor White drives to the basket late in the game. 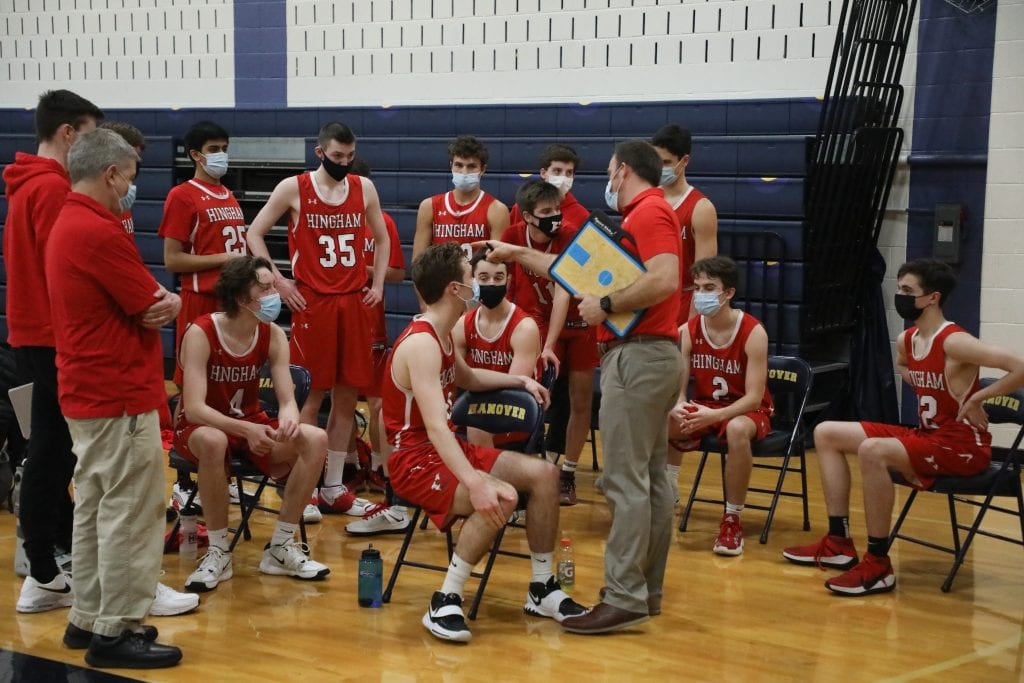 Head Coach Bob Kniffen telling his players to keep the pressure on. 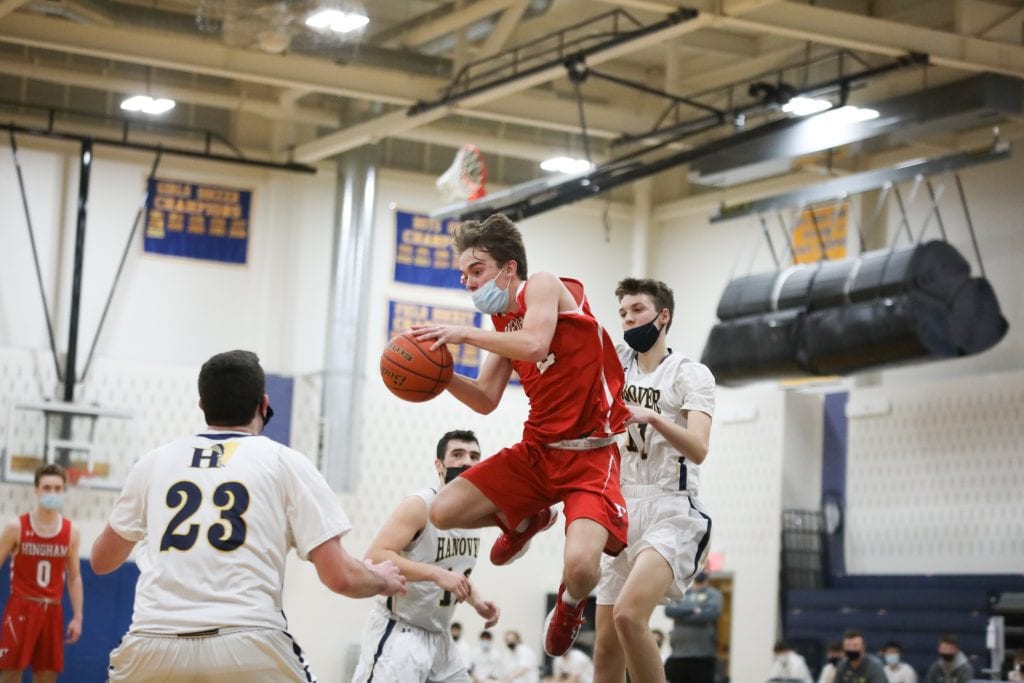 Even with the game in hand, junior Curtis Murphy is flying around the court making plays. 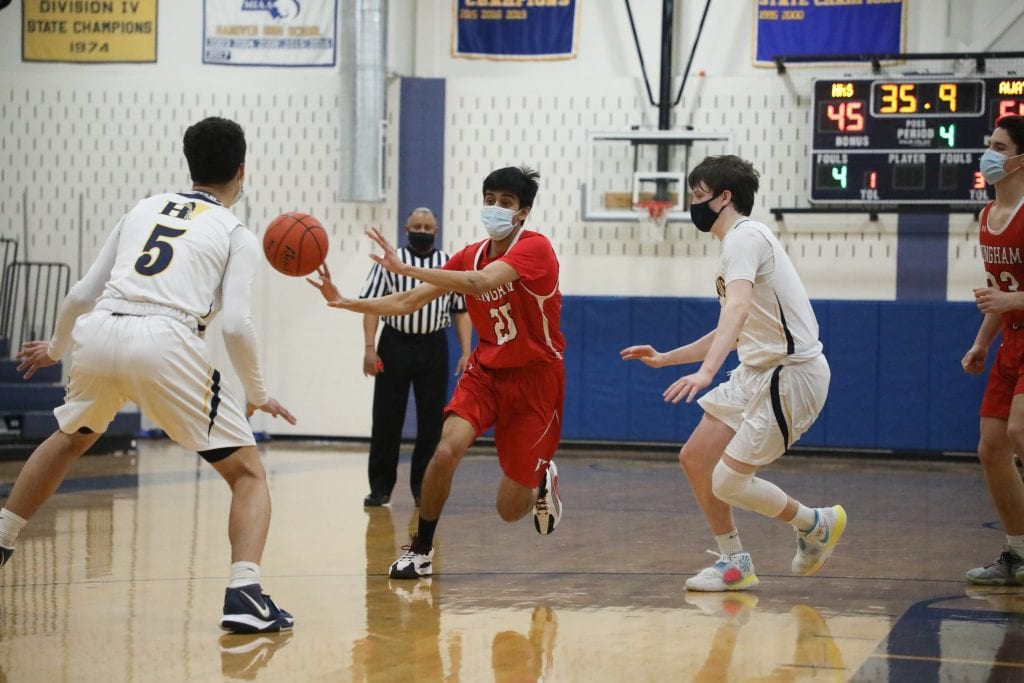 Senior Shrey Patel passes to a teammate as the clock winds down.