"I'm grateful that a group of local investors approached me to do something unique. We're not ready to disclose the details, but I am incredibly committed to this community, which has done so much for me."

James Wood, known as "Woody" to his many customers and friends, was forced in March to close down the popular Woody's Goodies food truck he owns and operates at the Hingham Shipyard due to COVID-19 and the accompanying shutdown of commuter boat service, but he's making a comeback next Monday, Sept. 21, with expanded offerings in addition to old favorites.

This time around, Woody is offering delicious lunches for families with children who are participating in remote learning programs or being homeschooled, and for people who are working from home -- as well as commuter boat customers.

Orders may be placed ahead of time by phone and picked up at the food truck, grab-and-go style. This will help make up for lost revenue from far fewer boat riders, while at the same time making lunchtime easier for harried parents and workers.

Daily specials will be offered starting next Monday. The menu that day will include homemade tuna on brioche; grilled ham and cheese with vine-ripened tomatoes and two slices of bacon on top, on grilled scali bread; steak and cheese off the grill; and homemade chicken noodle soup, because cooler temperatures are expected that day. Everything is fresh and made to order.

"I have three kids of my own, and my wife, Natalia, and I are trying to get them situated in the new school year," Woody said. "I understand the challenge of parents providing their children with three meals a day [during these very different times], and this is my way of helping to take off a little bit of their load.

"This is also a good opportunity to take a quick ride or walk -- to get outside for a little while," said Woody, who welcomes every customer with a friendly greeting and a big smile.

Woody's Goodies is most "famous" for both its hot and iced coffee -- including the original breakfast blend, French vanilla, and hazelnut, to which may be added different flavorings -- from peanut butter cup and almond joy to mocha and other choices, most of them dairy-free.

"I will be eliminating candy and in its place will be offering healthier options, such as granola and energy bars and nut mixes," Woody said.
Woody's Goodies' pre-COVID hours were from 5 to 9 a.m. The new hours are 5:40 a.m. (to accommodate riders on the early boat) to 1 p.m. (through lunchtime). Woody's Goodies is open Monday through Friday.
Pre-pandemic, Woody normally sold between 50 and 60 breakfast sandwiches every morning, along with about 25 gallons of iced and hot coffee. He is hoping to recover much of that business now, by offering both breakfast and lunch.

Even though social distancing will be in place and Woody will be wearing a face mask, that won't interfere with resuming his friendly conversations with customers -- from a distance. "There just won't be the usual handshakes and hugs," he said.

'My customers are also friends'

Woody is hoping to see many of his old customers -- some of whom have been in touch with him over the past several months with text messages -- return, along with new ones. "I truly believe that all my customers are friends, whether I see them every day or once a month," he said.

Woody will be at the Shipyard with his food truck year-round whenever the boats are running -- "in rain, snow, or sleet," he said. "On snowy days I bring a shovel to help clear an area for the food truck."
Woody has been in the food truck business for 25 years, 11 of those based at the Shipyard, where business was brisk up until the pandemic hit. Before that he had his own pizza business, with food truck operators as his primary customers.

Woody set up his food truck at the Shipyard after Steve Bonczek -- who had operated a food truck there for 30 years -- retired -- with his blessing.

"What appeals to me about the food truck business is that I'm my own boss," Woody said. "Plus I love interacting with the same people every day. It's an unbelievably fun job, telling customers the same dumb jokes over and over again. I always look forward to seeing every one of them every single day." 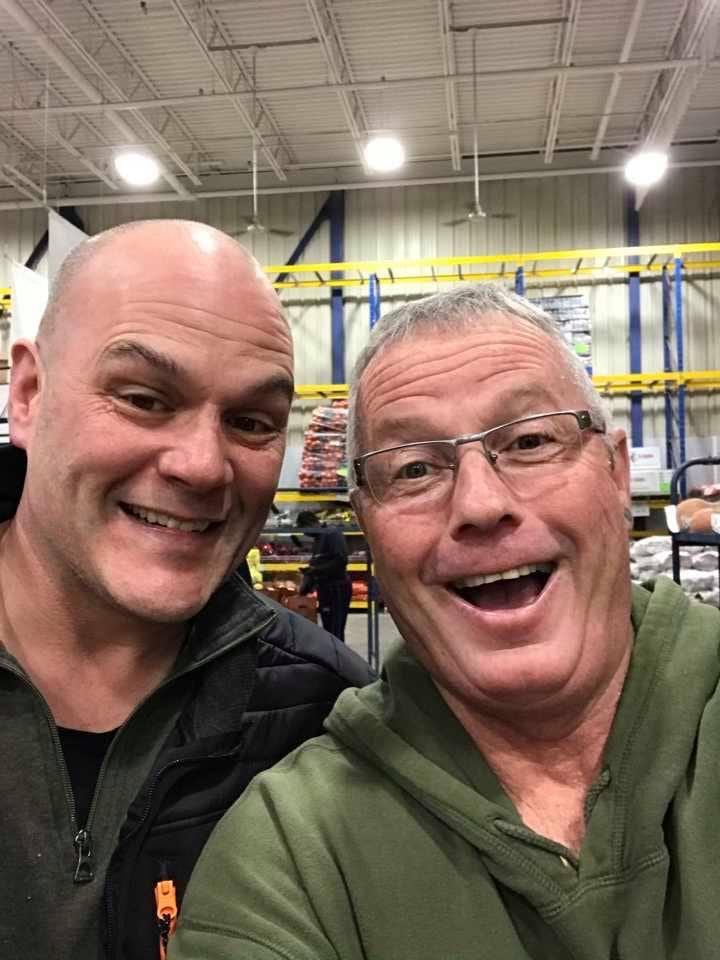 Over the years, Woody's customer base reached between 400 to 500 loyal patrons from Hingham, Marshfield, Scituate, Cohasset, Norwell, Hanover, and other communities -- including those who stopped by every day and others who ordered food occasionally on the way to the boat.

"When I see my regulars coming, I have their favorite breakfast sandwich or coffee ready when they  arrive," he said.

To help him get through the long stretch between the closing of Woody's Goodies last March and next Monday, customers and other well-wishers raised $18,500 through a GoFundMe campaign set up by a friend.

Four years ago, the same friend set up a GoFundMe campaign for Woody and his family when the commuter boat was out of commission due to a dock issue, which raised $11,000 to help him pay his bills while his food truck was out of service. The story made it to Channel 10 News.

"I wasn't keen on the idea of accepting money that I didn't earn myself either time, but if I hadn't, I would be in a much different situation than I am now," he said. "I am grateful to everyone who contributed. It's been a tough road at times, but my loyal customers have helped me stay in business. This has taken so much anxiety and worry off of me. The support has been overwhelming."

The second time around, Woody was even more reluctant to accept a helping hand than the first. "When I said I didn't want my friend to do it again, he told me if I didn't accept he would come to my house with a big bag of cash," Woody explained. "My customers are some of the best people I've met during my entire lifetime."

At Christmastime for the past five or six years, a group of customers held a Woody Appreciation Day, surrounding his truck and leaving presents for him and his family. "I would cook them a wonderful breakfast, such as steak tips and eggs," he said.

He gives back to the community by participating in various fundraising events when he can.

'Everything will work out'

Maintaining a positive attitude is important to Woody. "I firmly believe that in the end it will all work out," he said. "That always seems to be true no matter how much you worry -- for that reason I have not worried one bit [during this challenging time]."

Besides his loyal customers, Woody said his father -- also James Wood, with a different middle name from his son -- who taught him good work ethics, and his in-laws Debbie and Larry Gove are among his biggest supporters. "I can't thank them enough."

Topping the list is Natalia. "There's nothing in the world she wants more than to have me succeed," Woody said. "She is the best mom and my biggest supporter."

Woody also shared more good news.  "I'm grateful that a group of local investors has approached me to do something unique. We're not ready to disclose the details, but I am incredibly committed to this community, which has done so much for me," he said. "We've been talking in great detail about possibly opening a new business in the area. [That said,] Woody's Goodies won't go away." Stay tuned for more details.