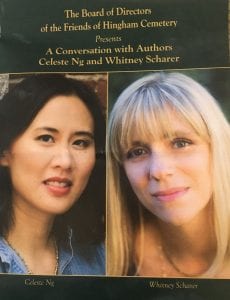 Have you ever found yourself craving more “Chunky Monkey”? Well, that’s exactly how I felt last Friday night, 2/15, after a wonderful event put together by the Board of Directors of the Friends of Hingham Cemetary at Ames Chapel. Except it wasn’t the ice cream I was craving …

You see, the “Chunky Monkeys” are a writing group consisting of nine local writers, two of whom we had the pleasure of meeting at this event – Celeste Ng and Whitney Scharer. The event was promoted as being “A Conversation with Authors Celeste Ng and Whitney Scharer” and I think that was putting it lightly. It felt much more like a cozy chat amongst friends than a larger group conversation. Even though the event sold out, Ames Chapel provided a small, intimate, and quaint setting for all attendees. I was seated in the back row yet still felt up close and personal with both authors. Being in their writing group – the Chunky Monkeys –Celeste and Whitney have become very close friends, and I believe that truly resonated with the crowd.

Celeste Ng lives in Cambridge and is currently working on her third novel. Her first two novels, Everything I Never Told You and Little Fires Everywhere are both New York Times Bestsellers, and have both been named best book of the year by a wide variety of publications. Her last book, Little Fires Everywhere, has been adapted into a limited television series that will star Reese Witherspoon and Kerry Washington and will be airing on Hulu soon.

Whitney Scharer lives in Arlington and released her debut novel, Age of Light, just this month. It might be her first book, but it has already sold for over one million dollars in an auction involving fourteen publishing houses, and has been named most anticipated book of 2019 by Oprah.com, and various other sources.

I would think it would be hard for those who were fortunate enough to be a part of this event to disagree with me when I say that not only were these two women quite delightful, the whole evening was. From the wine and appetizers, to the author’s conversations, and finally to the meet-and-greet at the end, I really felt lucky to be a part of it all. I felt as though I left as an honorary member of the “Chunky Monkeys” and know that I will keep that feeling with me as I feverishly read both Celeste and Whitney’s novels. Did I mention we all got a signed copy!?

It was entirely a win win in my book and I’m extremely grateful to the Friends of the Hingham Cemetery for hosting such an extraordinary event to Hingham.

1 thought on “Thank You To Celeste Ng, Whitney Scharer and Friends of The Hingham Cemetery”