Also of great interest to Noah, 13, was Sanders' resulting fundraiser that brought in $1.8 million for charities -- including Meals on Wheels -- in his home state of Vermont through the sale of merchandise such as T-shirts and sweatshirts that featured that now-famous inauguration photo.

After watching a YouTube video of someone who had 3D printed a Bernie meme, Noah decided to make a 3D model of his own. "My dad posted a picture of it on Facebook, and a bunch of people said that they would love to order one," Noah said. "The proceeds will benefit the local Meals on Wheels program because it is one of the charities that Bernie donated to [through his fundraiser]."

Noah got the idea for the model from the "Thingiverse" website, where people can post their 3D models, usually for others to 3D print.

Thingiverse is a website dedicated to the sharing of user-created digital design files and is widely used in DIY technology.

Noah used PLA, which is a type of biodegradable plastic that melts at a low temperature so that it can be formed into parts, to create his three-inch-tall Bernie models.

So far, he has made 22 models of the 29 that have already been ordered. "People have been really kind and made extra donations specifically for Meals on Wheels," Noah said. The cost is $10 each, and already Noah has raised more than $300.

When asked what his goal is, Noah said he stands ready to make as many as possible. "It's hilarious to see them all lined up in a row!" 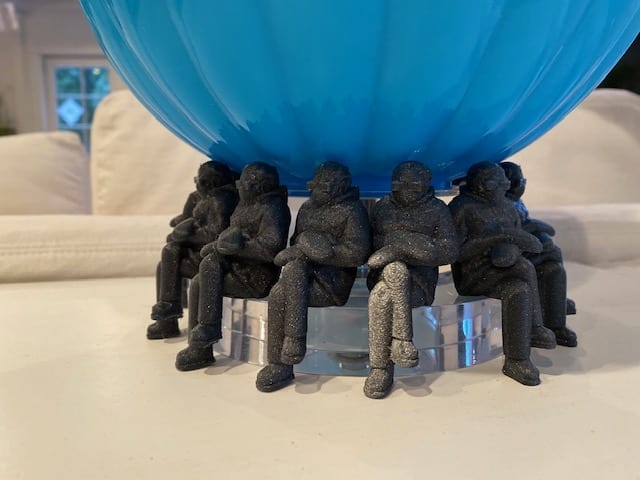 Email Noah at [email protected] to order one of your own.

Among this talented seventh-grade entrepreneur's other interests and accomplishments are starting a gingerbread house-making business when he was in the second grade and more recently, making his own smart glasses (wearable computer glasses that add information alongside or to what the wearer sees). Noah is currently in the midst of coding a stock trading neural network that will help predict what the stock market will do next.

"I have always loved trying out business ideas," Noah said. "I've also sold comics and walked dogs, and recently, my friend’s mom asked me to 3D print her some custom-theme cookie cutters. I would also love to tutor math and to help people out with their 3D printers."

The sky's the limit! Go for it, Noah!