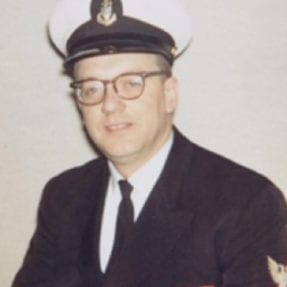 Norman A. Rogers, of Hull, formerly of Quincy and Largo FL, died peacefully on Sunday, December 20, 2020 at the South Shore Hospital in Weymouth. He was 84.

Norman lived a life of service. After graduating from Quincy High School in 1953, he enlisted in the United States Coast Guard. Over the course of his career, he served aboard many vessels including light ships, weather patrols and the Yakutat during the Vietnam conflict. His last commission was as CO of Point Allerton Coast Guard station in Hull (1970).

After retiring from active duty, Norm adopted Hull as his home town and he easily transitioned into civilian life captaining passenger boats for Massachusetts Bay Lines and Bay State Cruises. He served as co-captain of the Hull to Boston daily commuter boat. Never one to back away from a challenge, Norm piloted the ferry home to Hull during the Blizzard of ‘78.

Norm’s service to his community also included 15 years on the Hull School Committee, membership in the Hull Lion’s Club, and numerous volunteer activities for the Hull Public Schools and community-at-large.

Predeceased by his wife (Anne Bentley Rogers), Norm leaves his sister, Nancy Rogers of Quincy and his children: Michael (Christine) of NH, Mark (Terry) of ME, Scott (Amanda) of VA, and Lisa of Hull. Norm was the proud grandfather of six granddaughters: Ariel, Megan, Margaret, Emily, Caitlin and Jenna.

May you have fair winds and following seas.

Relatives and friends are respectfully invited to attend the visiting hours on Monday, December 28, 2020 from 5 through 8 PM in the Pyne Keohane Funeral Home, 21 Emerald St. (off Central St.), Hingham.

Friends who are unable to gather with Norman’s family at this time, may still offer their support by sharing a special memory or message by clicking the link above.