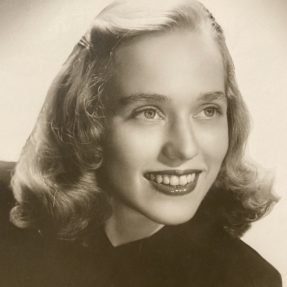 Nancy H. Wahle of Hingham, who lived a joyful life of 92 years, went home to Our Lord on June 25, 2022. Nan had a lifelong devotion to the Mother of God, and would have been pleased to know she entered eternal life on the Feast of the Immaculate Heart of Mary.

Born in St. Louis, Missouri, the daughter of the late Alma and Raymond Haas, Nan contracted polio at the age of six months. She spent a great deal of her childhood in bed bravely facing more than a dozen surgeries in order to be able to walk. It was during this time that Nan developed her lifelong love of dolls.

At the University of Illinois, where she graduated with a degree in journalism, Nan met and later married her devoted husband of 45 years, the late Bernard A. Wahle of Evanston, Illinois. After several years in various midwest locations, the family moved to Massachusetts, spending many happy years in Needham and Hingham—where they lived a good part of their married life—and in later years, Sandwich.

A convert to Catholicism, an unwavering devotion to Jesus Christ and her Catholic faith was at the center of her life. She attended daily Mass at St. Bartholomew’s in Needham, Resurrection in Hingham, and Corpus Christi in East Sandwich, and was a life-long member of the Catholic organization, Opus Dei. Her witness to God’s overwhelming love and mercy is the greatest legacy she leaves with the great many who were fortunate enough to know her throughout her life.

Nowhere was this witness greater than in her own home, where her life’s vocation was homemaker, wife, and mother of four children:  Scott C. Wahle (Maribeth) of Osterville, Mass., the late Linda W. Howlett (Jeff) of Penfield, New York, Thomas C. Wahle (Mary Anne) of Arlington, Virginia, and Daniel J. Wahle (Susan) of Plymouth, Mass.

Among her greatest joys were her 16 grandchildren whom she adored, and for whom she offered up her many physical challenges. Her grandchildren adored her in return, often sharing stories and great humor in their “Race to the Favorite Grandchild” group text. Nan also was blessed with 17 (soon to be 18!) great-grandchildren who will forever love their “GG Mimi.”

Nancy is predeceased by her only sibling, Dick T. Haas of Ft. Lauderdale, Florida.

Relatives and friends are respectfully invited to greet the family on Thursday, July 7th at 10am at Resurrection Church, 1057 Main Street, Hingham, before a Mass of Christian Burial at 11am.

Interment will be alongside her beloved husband, Bern, in the National Cemetery, Bourne, Mass.