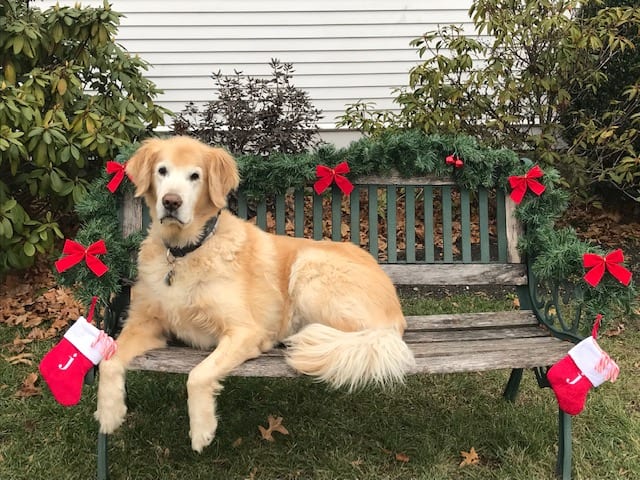 May 5, 2020 by Carol Britton Meyer (all photos courtesy of the Taylor Family) The first thing that would catch the eye of people driving, walking, or running by 54 Pleasant St. over the past six years was a beautiful Golden Retriever sitting or lying on the bench in the front yard, placidly watching  passersby or enjoying a tummy rub or a treat from one of his admirers.

Now the bench is filled with flowers, painted rocks, notes, photos, balls, and dog treats as a memorial to Jagger -- who passed away peacefully yesterday morning -- and a tribute to the joy he brought to the lives of all who knew him. He was loved by everyone who encountered him -- whether once or regularly during their daily walk or run.

Jagger not only liked to sit on benches; he also enjoyed sitting on diving boards, pool lounges, and couches (a big no-no!)

"Some people have told me they would alter their route just so they could see Jagger," his owner, Kathleen Taylor told the Hingham Anchor. "He was such a beloved town figure."

There has been an outpouring of love and support for her family as seen in the number of gifts in his memory that have been dropped on the bench he used to sit on, and the many comments on Pinboard, where Taylor posted a photo of Jagger in his memory, calling him a one-of-a-kind special dog. "It's heartbreaking and heartwarming at the same time," she said. 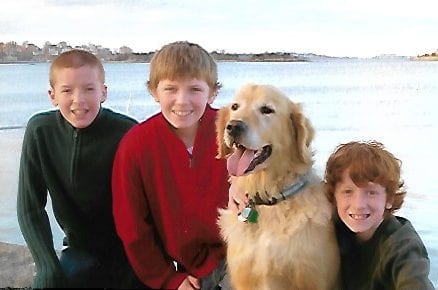 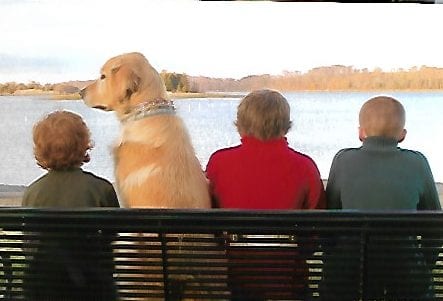 Jagger, who was born on July 16, 2007, lived on Wanders Drive with the Taylors -- Kathleen and her husband, Kevin, and their three sons -- Cameron, Bowen, and Brendan -- for the first seven years of his life before moving to their new home at the corner of Pleasant and Middle Street in Hingham Centre.

"Being in a higher-traveled area, he caught the attention of countless people," Taylor said. "He was the sweetest dog you could ever ask for, and hardly ever barked. He was a breeze to train and gave us more love and joy than I could ever express."

As much as Jagger enjoyed seeing old friends and meeting new ones, he was especially loyal to Taylor. "He would cling to me," she said. "I would sometimes say to the person passing by who stopped to say hello to him, 'I'll go inside for a minute while you enjoy Jagger.' It's amazing how many lives he touched."

Unfortunately, his health started failing in the past year. "Jagger developed laryngeal paralysis, which made his breathing really difficult, but of course, he never complained," Taylor said on Monday after his passing. "The vet said he was deteriorating, and there was nothing we could do to make him comfortable. Today has been beyond devastating. I told Jagger as I said my goodbyes that he would be greeted in Heaven by my parents and their beloved German Shepherd."

On their way home from the vet's, the Taylors were stopped at the lights at Queen Anne's corner, and in the car next to them was a German Shepherd, head out the window enjoying the beautiful day. "For me, that was a sign that he had made the trip over the Rainbow Bridge and was welcomed by my family," Taylor said. 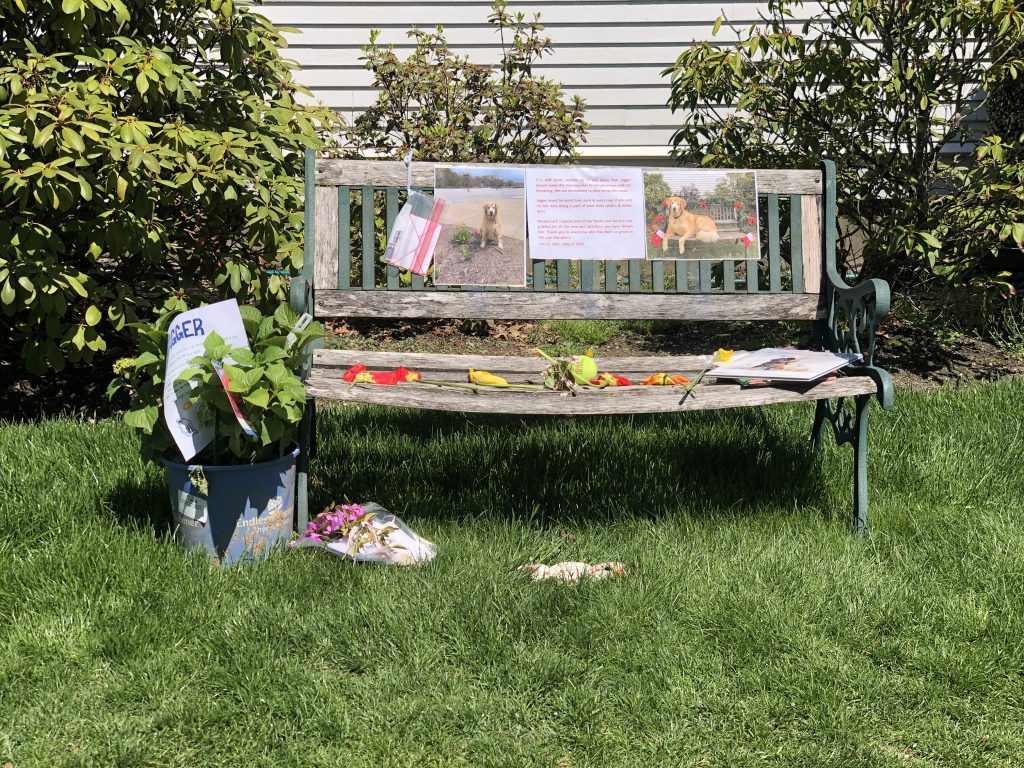 Jagger will be missed, not only by his family but also by those who pass by the now-empty bench. "He was truly a once-in-a-lifetime dog," Taylor said.

10 thoughts on “Jagger — Hingham’s favorite dog — will be missed”