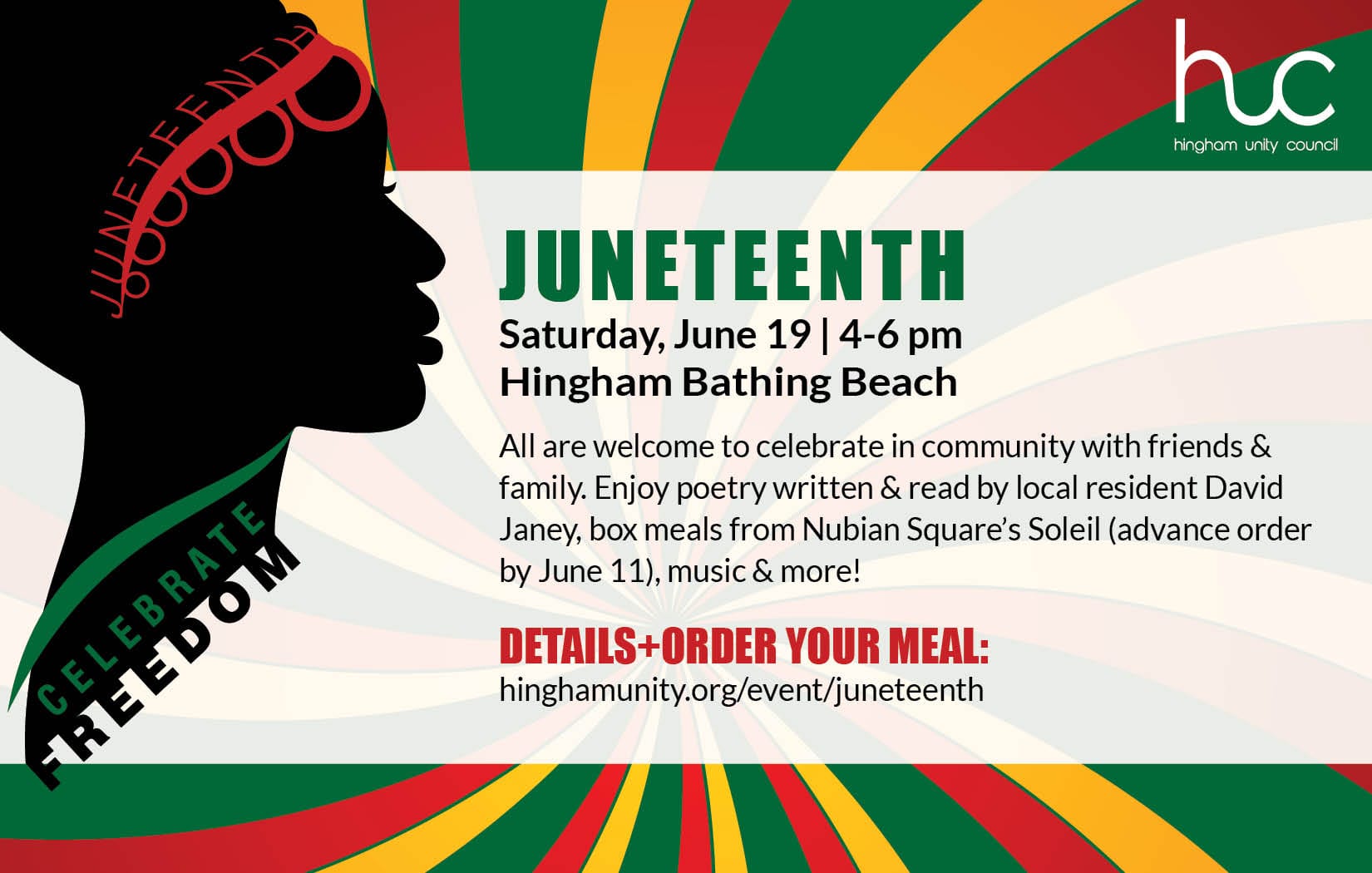 The Hingham Unity Council (HUC) is making plans to celebrate Massachusetts’ newest state holiday, Juneteenth. The HUC plans to observe the holiday with a mix of activities culminating in a short program on Hingham Bathing Beach, on Saturday, June 19, 2021. The HUC is inviting area residents to the beach from 4-6pm to learn about Juneteenth, hear reflections from Hingham residents and mark the occasion with a reading from Hingham poet David Janey.

Juneteenth, an annual celebration commemorating the end of slavery in the United States, has been regularly celebrated by African-Americans since the late 1800s. Although President Abraham Lincoln’s Emancipation Proclamation on January 1, 1863, declared slavery over in America, it took two years for the news to reach Texas when a Union general, Gordon Granger, arrived in Galveston on June 19, 1865 to take control of the state and inform enslaved African-Americans of their freedom. Since then, June 19th commemorations, or Juneteenth, have occurred annually throughout the US. In Massachusetts, the celebrations were largely informal until the state passed legislation in July 2020, recognizing the Juneteenth as a state holiday.

The HUC’s celebration of the holiday may be especially appropriate given Hingham’s historical ties to Tuttleville, one of a handful of African-American enclaves in the South Shore that emerged after the Emancipation Proclamation ended legalized enslavement in the United States.

“Hingham has such a rich history, given its connection to Tuttleville, it would be a shame not to recognize it with a celebration on Juneteenth,” said Aisha Nelson, a member of the HUC and one of the event’s organizers. “The hope is that this event will both provide an opportunity for residents to celebrate the holiday, and learn more about some of the amazing African-American citizens who have lived and worked in Hingham,” Aisha added.

In addition to the short program scheduled at the Bathing Beach, the HUC is also working with a Soleil Restaurant, located in Nubian Square in Boston, to allow residents to pre-order meals that can be picked up at the event. The opportunity to support an African-American-owned business and provide families a day off from cooking was a key part of the committee’s consideration when planning this event. Meal orders can be placed on the HUC website by Friday, June 11th.

“We wanted to provide families an opportunity to celebrate the day without struggling to squeeze in meal preparation,” added Marc Lucas from the event committee. “Partnering with Soleil allowed us to help relieve that burden for families while supporting an African-American owned business in the process. We felt it was an appropriate way to recognize the past while paying it forward.”

For more information on the upcoming event, as well as a timeline of Black history in Hingham that includes stories of residents from Tuttleville, please visit the Hingham Council Unity website at: https://hinghamunity.org/event/juneteenth