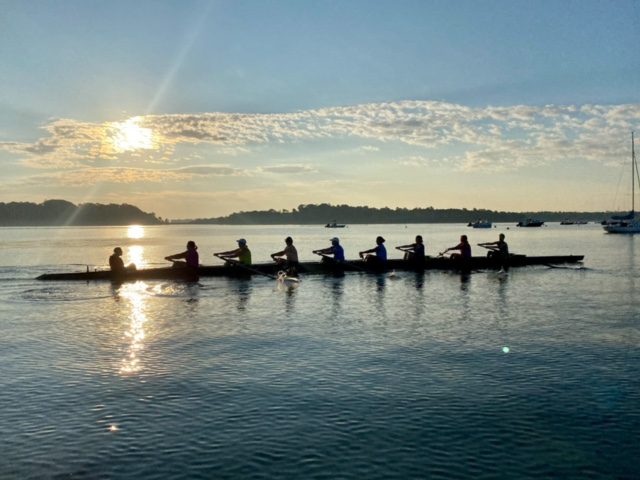 Hingham Maritime Center - which operates from Barnes Wharf -- is celebrating "50 Years on the Water" in 2021.

The non-profit HMC -- which is one of Massachusetts' first community boating programs -- has offered sailing, rowing, maritime education, and community access to Hingham’s scenic waterfront for the past five decades, with more than 10,000 individuals -- ranging in age from seven to 87 -- benefitting from the programming. 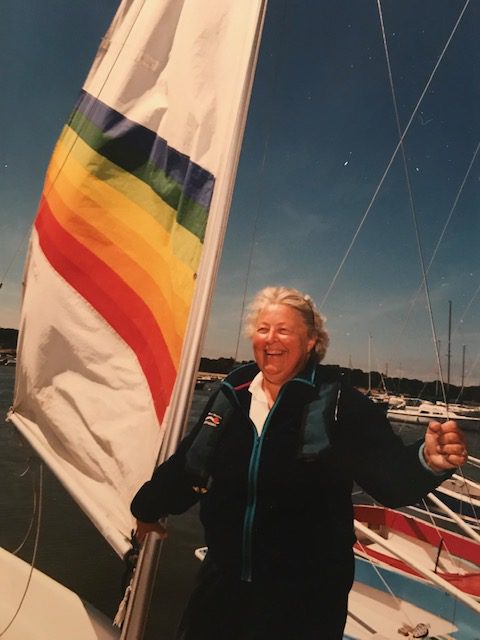 "We truly offer a community program, providing anybody and everybody who would like to participate [with affordable access]," said HMC Executive Director Ellen Gray English. "There are no memberships."

HMC's programs foster teamwork, self-reliance, physical fitness, and a "solutions-oriented" approach to sailing and rowing, with core values focused on safety, satisfaction, and respect for the environment and the community.

Initially named the Lincoln Sailing Club, she recalls how it all began: "It started with a conversation between my [late] mother and father, Ginny and Bill Gray, at Hingham Yacht Club in 1970 as they watched young people sailing in the harbor. Tom Curtis was standing next to her, and my mother made a comment about how only kids whose families were members of the yacht club got to sail in town since the closing of the Crow Point Sailing Club on North Beach. Tom turned to my mother and said, "Well, Ginny, what are you going to do about it?" 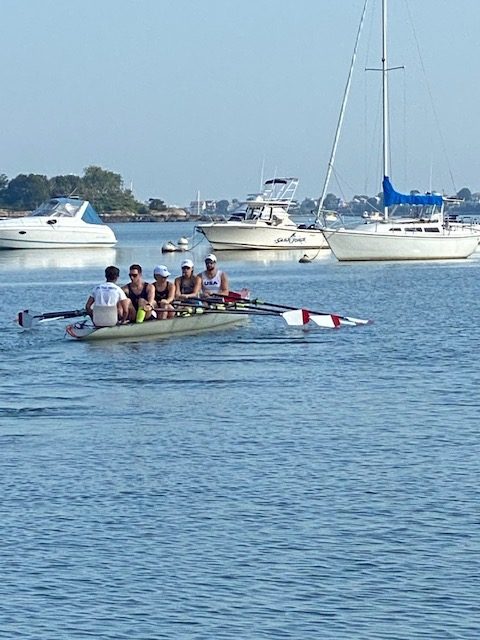 When Gray suggested creating a community sailing program, Curtis encouraged her to find a location, and as president of the then-Lincoln Trust Company bank (now Citizens Bank, located behind the post office), he was instrumental in providing the seed money to start the program, hence the name "Lincoln Sailing Club." 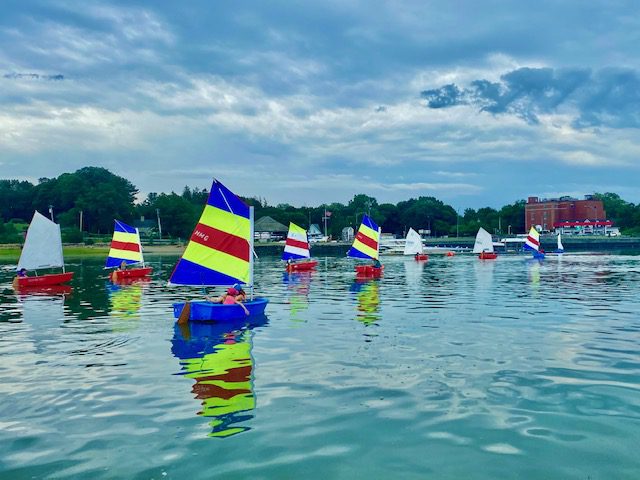 As a result, Gray -- whom her daughter referred to affectionately as "industrious and persistent" -- did some scouting around town. After discovering that Barnes Wharf was completely overgrown and underutilized, Gray sought and gained board of selectmen approval to use that site. "It was an easy 'yes,' and my mother had a vision that no one else in town had at that time," English said.

She recalls the wharf being cleaned up by a couple of local kids who needed to fulfill community service hour requirements, followed by a groundswell of support in the early 1970s from a group of Hingham residents who were excited about this new program, the Hingham Rotary Club (which Gray was not yet affiliated with, although she was at a later time), and others.

"LSC started with an incredible amount of support from the town, the Hingham Police Department -- which has acknowledged that community sailing and rowing programs like the ones we offer give idle hands something to do -- and the DPW," English said. 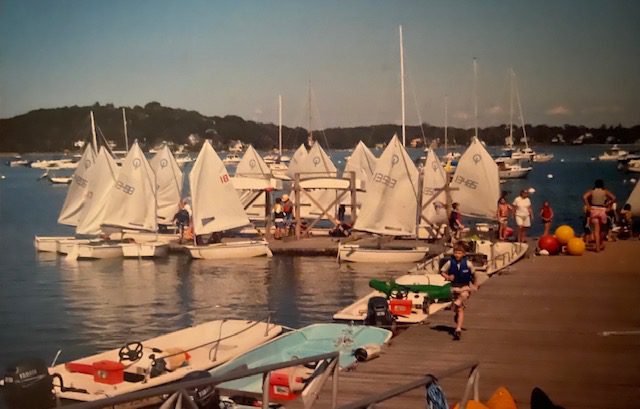 The program began in the summer of 1971, complete with a fleet of turnabouts, two docks, a ramp, a power boat named "The Incredible," and three sailing instructors, with all costs covered by the Lincoln Trust funding.

"The program initially worked around the tide, which was complicated, but then [LSC organizers] realized that people should learn how to sail in both high and low water," said English, who has been active with the organization for many years. HMC's fleet of boats and rowing shells numbers almost 100 today.

In 1979, Sturt English became involved with the sailing center as a junior instructor, working for then-Ellen Gray, who was the head of sailing. "We had wonderful summers teaching together and stayed in touch over the years due to our shared interest in sailing and supporting HMC," he recalls. "Lincoln Maritime Center (as it was later named)  was a central focus for much of both of our lives, including employment, volunteering, and Ellen serving as executive director  [-- following in her mother's footsteps --] when I was president of the board of trustees. 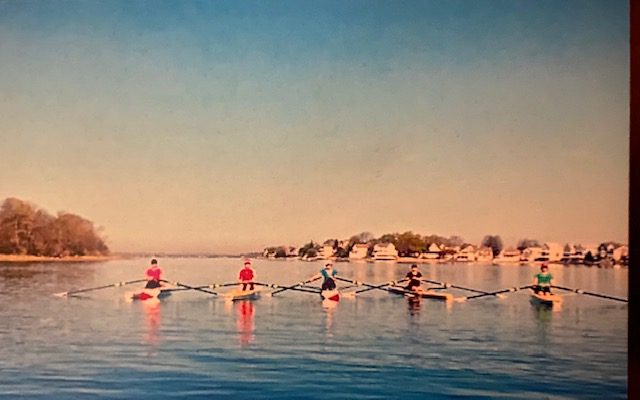 Our association with LSC was important to us both separately and now as a married couple. We're only one of many couples who found their soulmates at LMC," Sturt said. The club was renamed "Hingham Maritime Center."

In November 2019, Sturt returned to his role as president of HMC. A year later, Ellen was named interim executive director.  Their work continues together in support of HMC's 50-year legacy of providing community access to Hingham Harbor.

The mission of the original Lincoln Sailing Club -- to provide a way for all members of the community to have access to the waterfront -- continues, he said. "Hingham is defined by its harbor, but until 1971 only yacht club members or private boat owners had access."

There's nothing like being on the wharf "and seeing young kids come off the water soaking wet, with ear-to-ear smiles, after spending time in a sailboat. It leaves an indelible image," Sturt said.

Both Ellen and Sturt have had people whom they taught to sail approach them years later and share how learning this skill changed their lives, "meaning it taught them self-reliance, empowerment, and teamwork and helped them build self-confidence," Sturt says. "Hingham Maritime Center is a happy, invigorating, and exciting place to be." 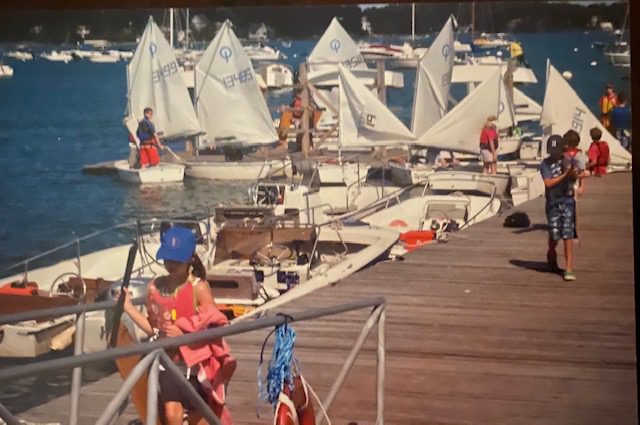 In recalling the many roles she has filled over the years, Ellen noted that she worked for Lincoln Sailing Center in 1979, Lincoln Maritime Center in 2006, and currently for Hingham Maritime Center as executive director. "I'm the only employee who has worked under all three names," she noted with a smile.

"We were under COVID restrictions earlier this year, and then they were suddenly lifted," Sturt said. "Thanks to very generous trustees and donors, HMC survived last year [when activities were at a minimum due to the pandemic]."

Once the restrictions came to an end, HMC began to get back on track.  "We've been fortunate in receiving donations, but our rowing shells are in fragile condition and our boats are old," Sturt said.

In addition to its regular sailing and rowing offerings, HMC also hosts a rowing program for students who attend any area high school that dovetails with the teams or clubs with which they are involved and helps them stay in shape. 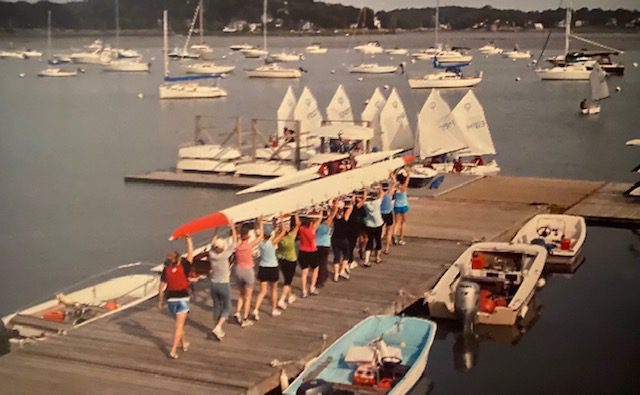 Reaching the 50th-year mark is special for Ellen because it is a solid reminder of the fulfillment of her mother's dream. "So many people have a connection with HMC, which is making a difference in the community," she said. "Keeping her vision alive is important to me. Each year is a challenge, so it's a real milestone to reach 50. In my world, it's amazing and awesome."

Sturt recalls that in the beginning the sailing center started out with a picnic table on a "dusty old wharf with a bunch of beat-up old boats and programs that were in their infancy."

Now on the occasion of HMC's 50th anniversary, after weathering many challenges, it all feels "real" to him. "We made it through the first 50 years, creating a great launching pad for the next 50 or 150 years," he said. "We've gone from humble beginnings to something that's still humble but more established than we were in the early years."

For more information about HMC or to make a donation, visit www.hinghammaritime.org. Donations toward a particular boat for the fleet are welcome, with naming rights granted to the donor.