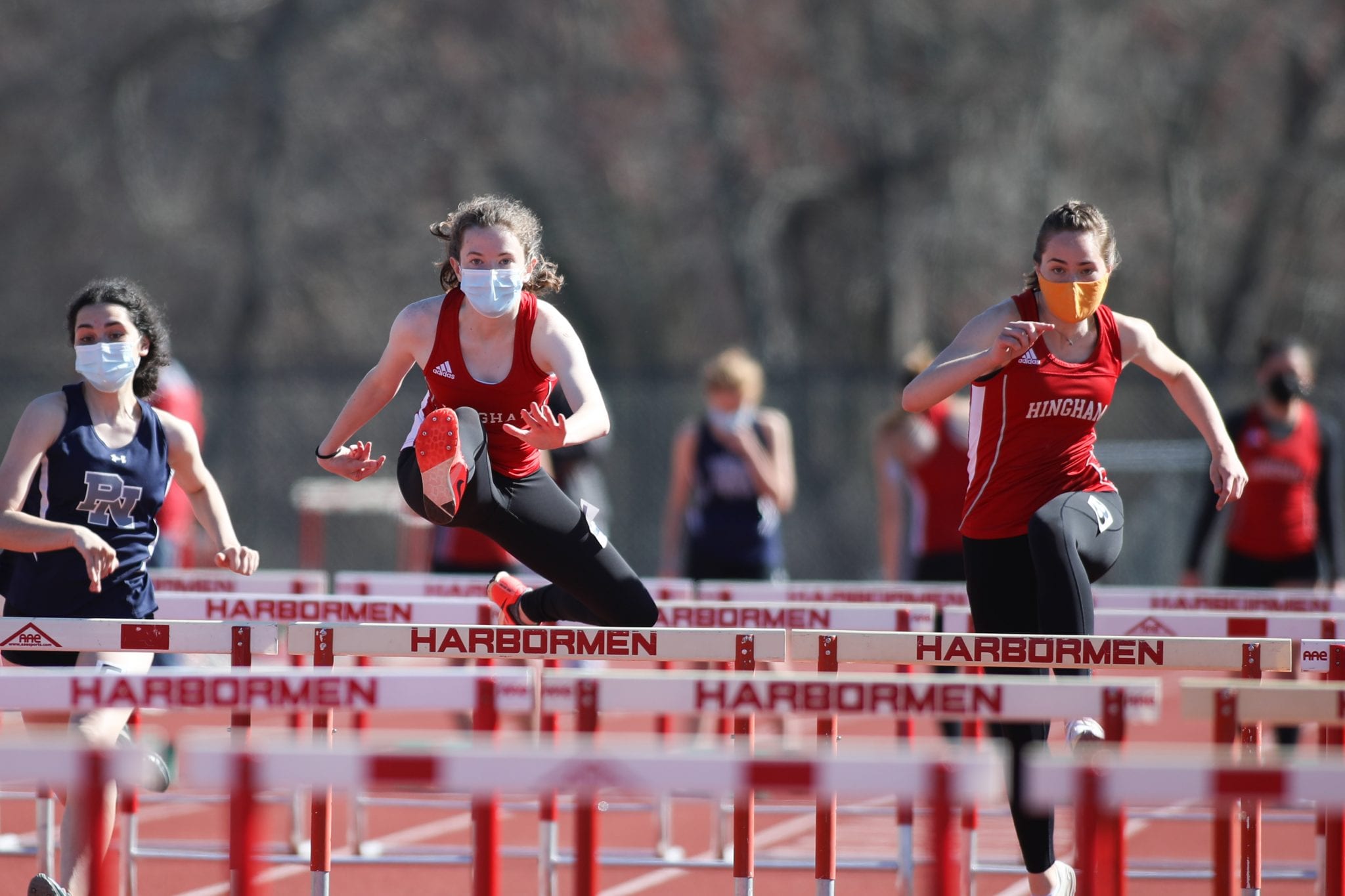 For two days earlier this week at Hingham High School, the Keenan Division in the Patriot League met for their winter track championships. The girls took the track on Tuesday, while the boys followed on Wednesday.  Runners from Duxbury, Plymouth North, Silver Lake, Whitman-Hanson, and Hingham convened to end their season. After delaying the winter track season from its normal winter schedule to the MIAA Fall II season, the team had to host virtual meets in the regular season before this final in-person competition.

Despite the different season, the Hingham boys and girls were very proud and excited about the final result. Senior Maeve Lowther was very happy that “the team environment has stayed positive the whole season, which is really awesome.” Coach Dawn Diedricksen was very supportive of her captains and seniors throughout the different times, mentioning that, “our captains this year have done a tremendous job….keeping the morale of the team up.”

Senior Kevin Ierardi also talked about the joys of an in-person competition after so many virtual meets. “It was absolutely amazing, I’m very proud of the team because we had virtual meets for all the dual meets and it wasn’t fun at times,” admitted Ierardi, “when we showed up it just felt so nice to see other teams with us because we haven’t had that all season.”

The Hingham girls got off to a great start, catching the eye of Diedricksen. “Pria Parker, Maeve Lowther, Maureen Koenen, Francesca Candelieri, all had very strong performances in their respective events today,” she noted, as each scored big points for Hingham. Kelsey Tarby, a sophomore, also aided Hingham's total by placing second in both the 55-meter dash and the 300-meter race. Lowther ran the 1000 and 1 mile and won both for Hingham. The senior described her two races very differently as, “for the 1000 I really had to work hard, the last 100 was wicked hard,” while, “for the mile….I kind of played it safe, just making sure I was staying in front of my competitors.”

Parker won the two-mile event by almost 90 seconds and would have been competitive with the boys if the two events were combined. Francesca Candelieri also won the long jump for Hingham and placed 4th in the 55-meter dash, securing valuable points for the girls. In the end, the Hingham girls won by 144 points over Plymouth North, scoring 397.  The win gave the girls their fourth straight league championship, which they have only lost 3-times since 2008.

Between Kevin Ierardi, Thomas Shetzline, and Sean McKay on the boys' team, Hingham was able to win the 300, 600, 1 mile, and 4x800 relay. “It went really well, I was very happy, we wanted to win by a lot and just like we won in distance we were able to get one through four in the mile and two-mile,” commented Ierardi, who swept the top-four finishes in the 1-mile event along with Matt Hall, Stevie McDougall, and Leo Burm. This dominant performance secured the blowout victory in the boys' competition, resulting in 189 points for Hingham while the second-place team Duxbury only had 84.  This was the boys third straight league championship.

This outdoor competition set up the team well for the Spring Track season. Most of the winter runners remain on the team for the next season, and this experience allowed the team to gradually ease into the more normal meet schedule. Parker noticed the similarities between the two seasons, remarking that, “it feels like spring track instead of winter,” although admitting that winter track has its own appeal. “I do miss [Reggie Lewis Center] a lot….it’s such a fun place to race and the facility is very nice.”

The Hingham Track and Field team has no more competitions for the winter season but will start back up after April vacation with the rest of the spring sports. 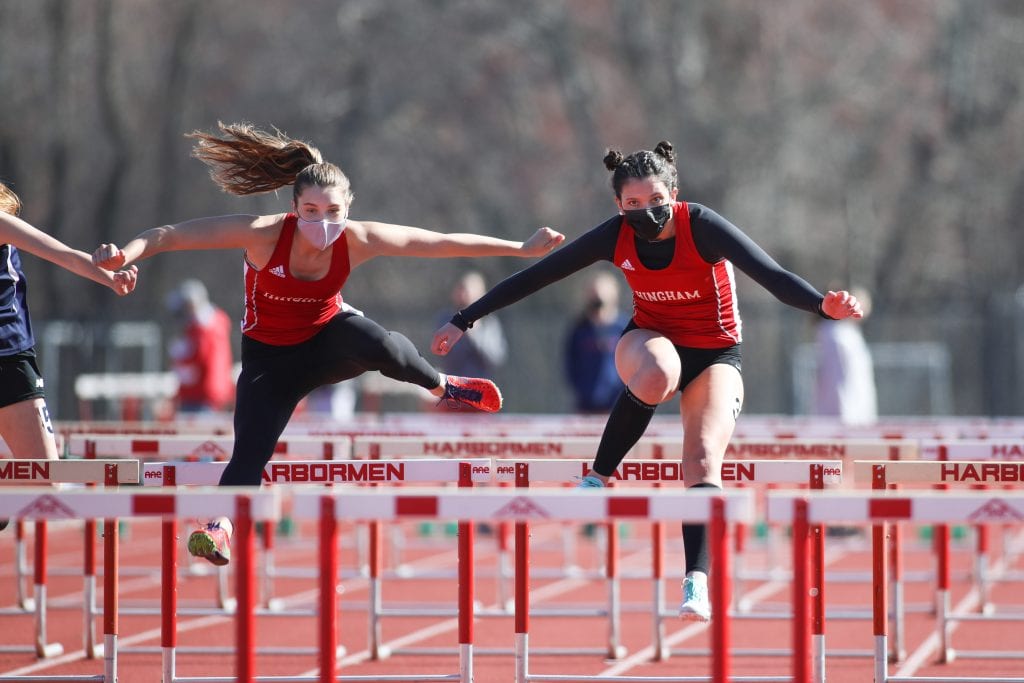 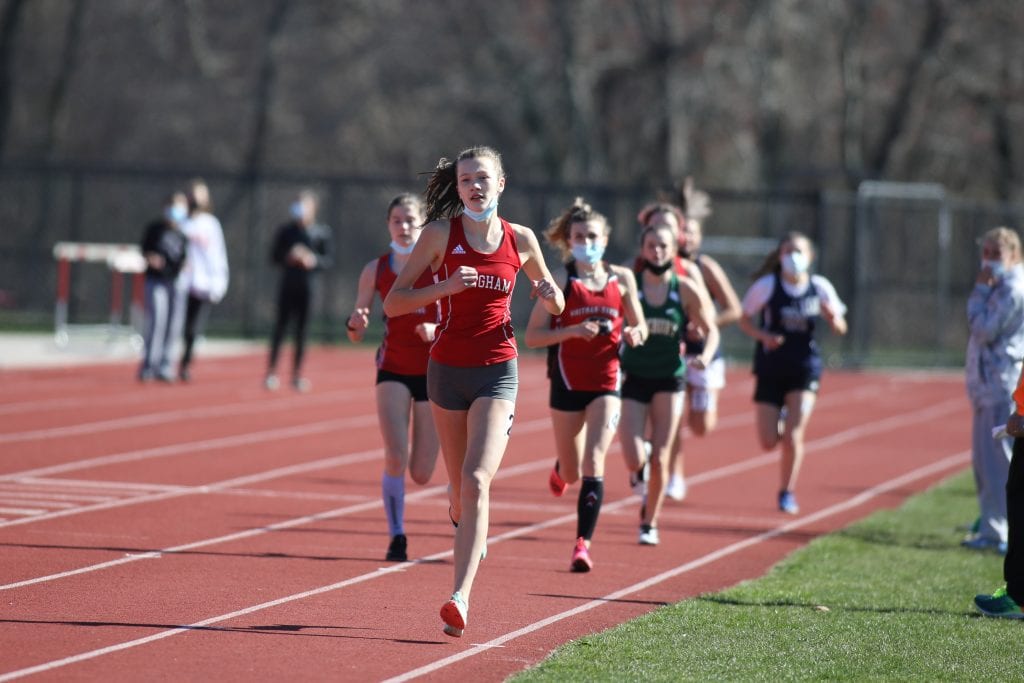 Senior Maeve Lowther had a great day finishing first in the 1 mile and the 1,000m. 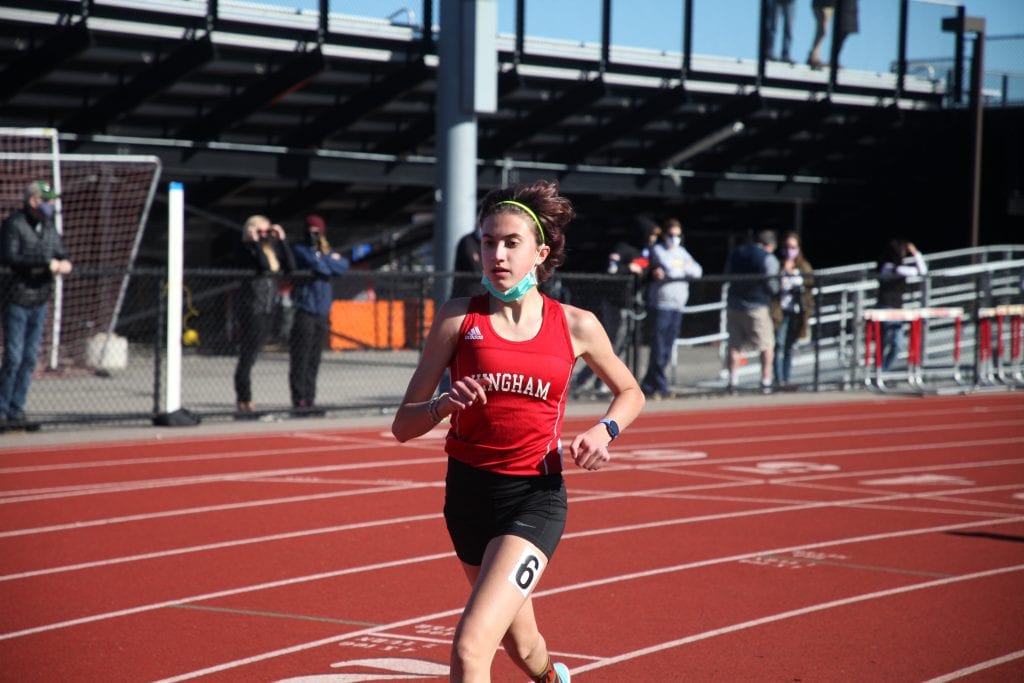 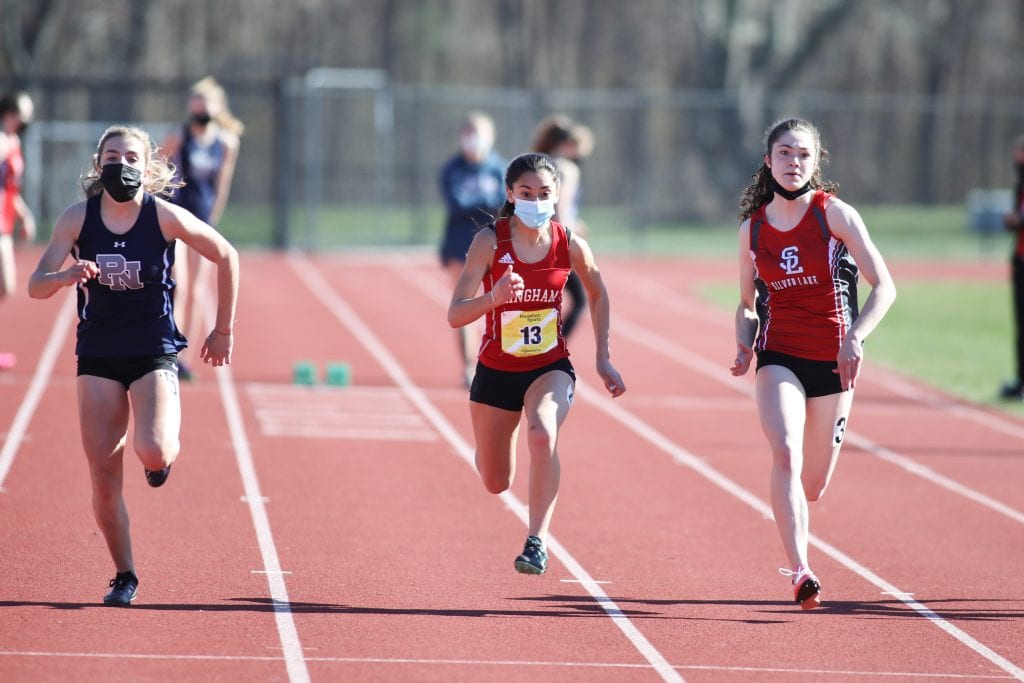 Junior Francesca Candelieri came in 4th in the 55m dash. 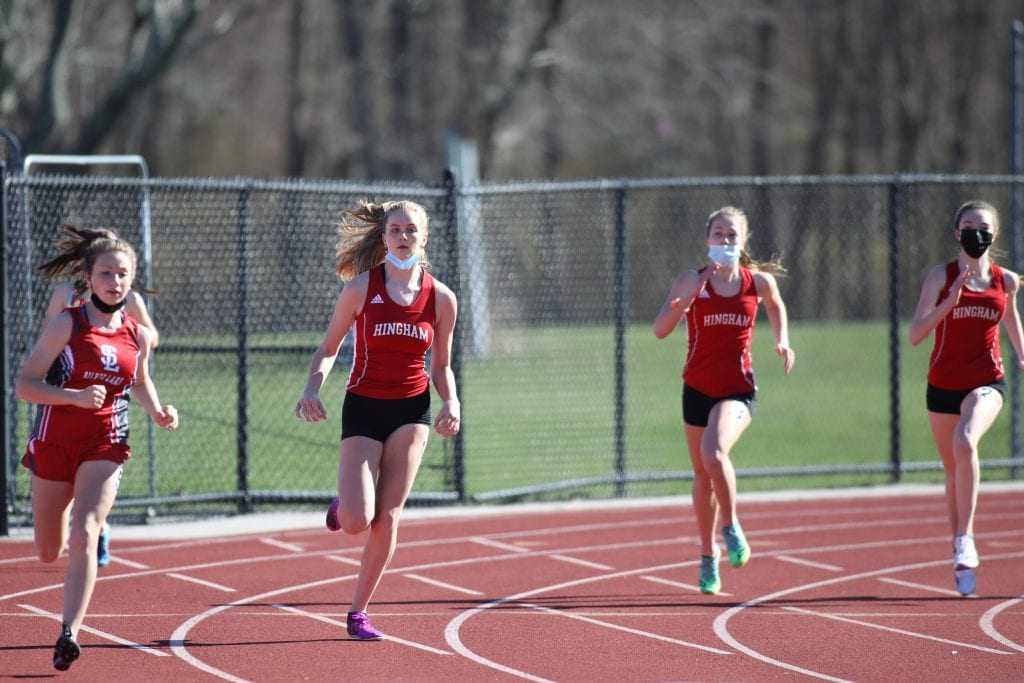 Junior Maureen Koenen (left) squeeked out a victory over sophomore Margaret Lowther in the 600m. 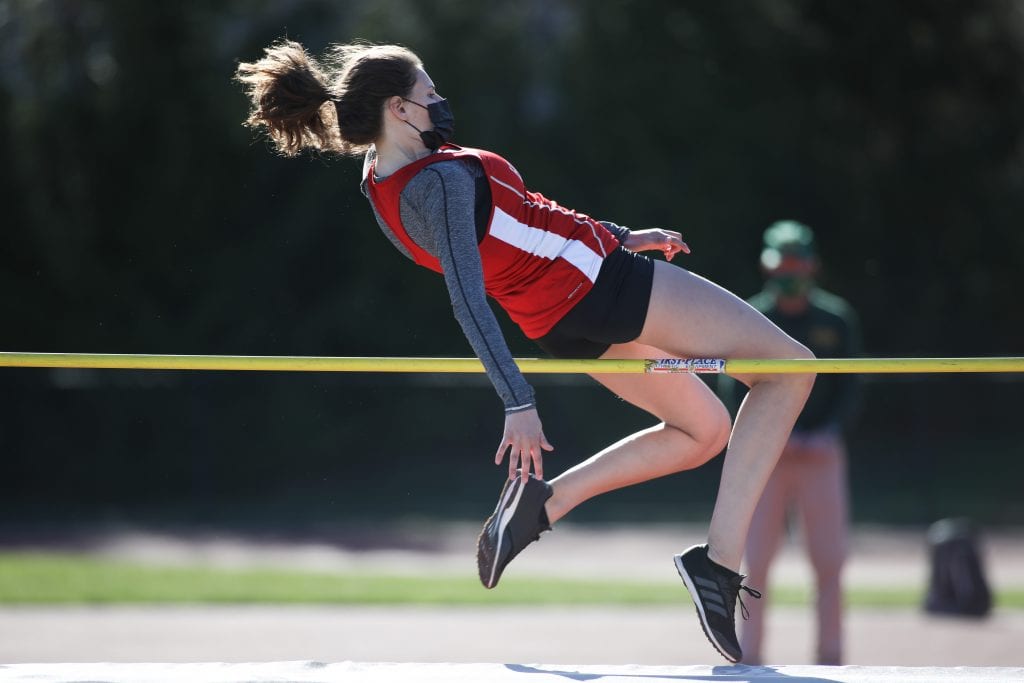 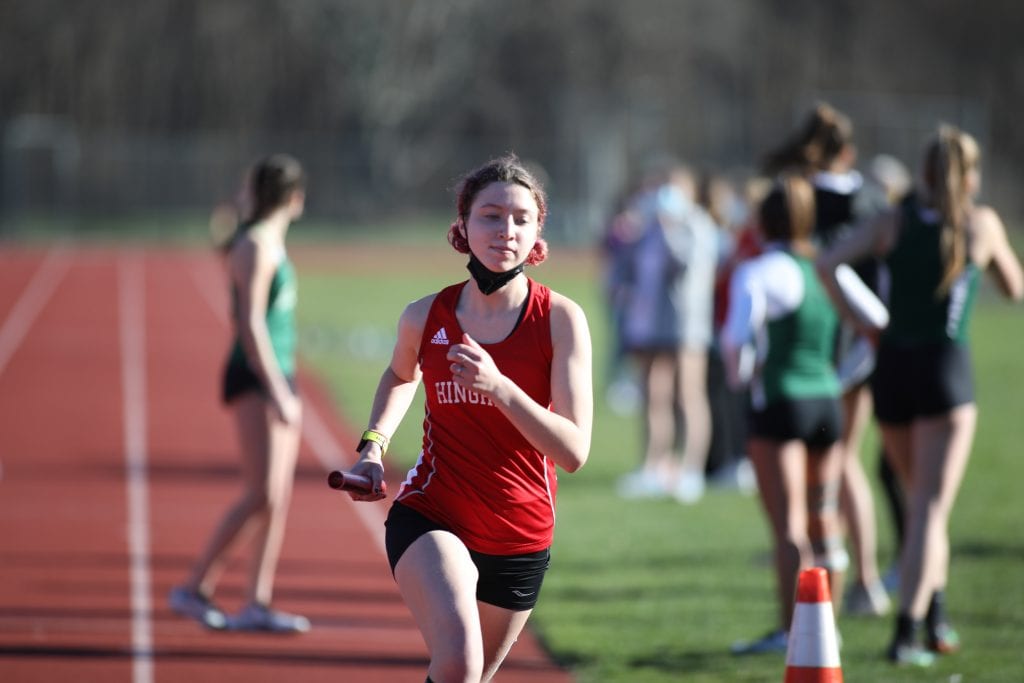 Senior Julia Burm was the last leg of the winning 4x800 relay team. 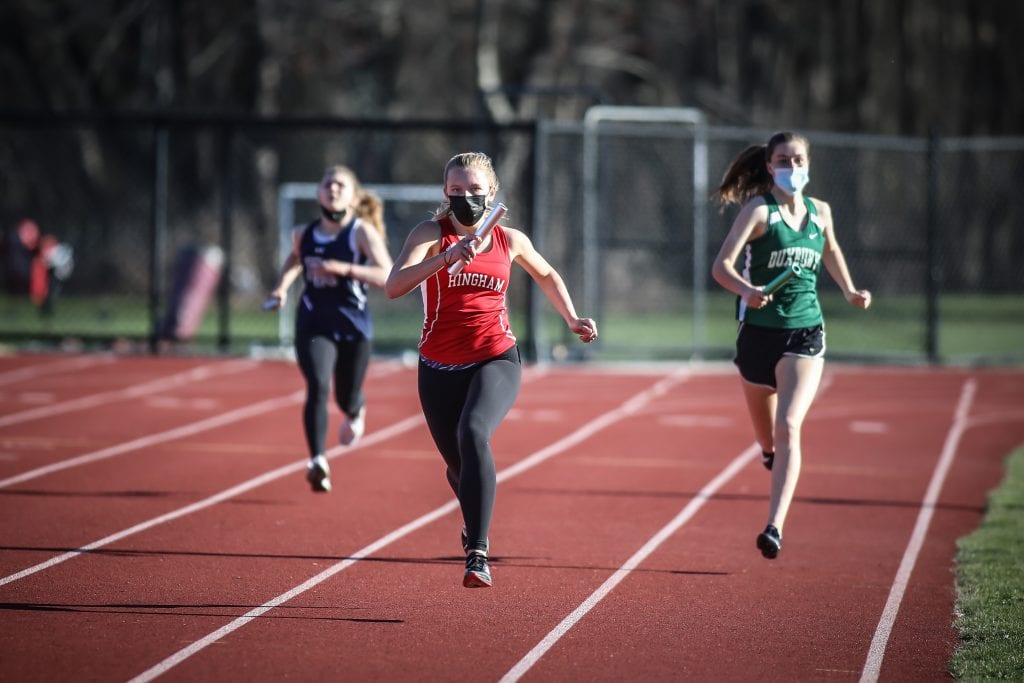 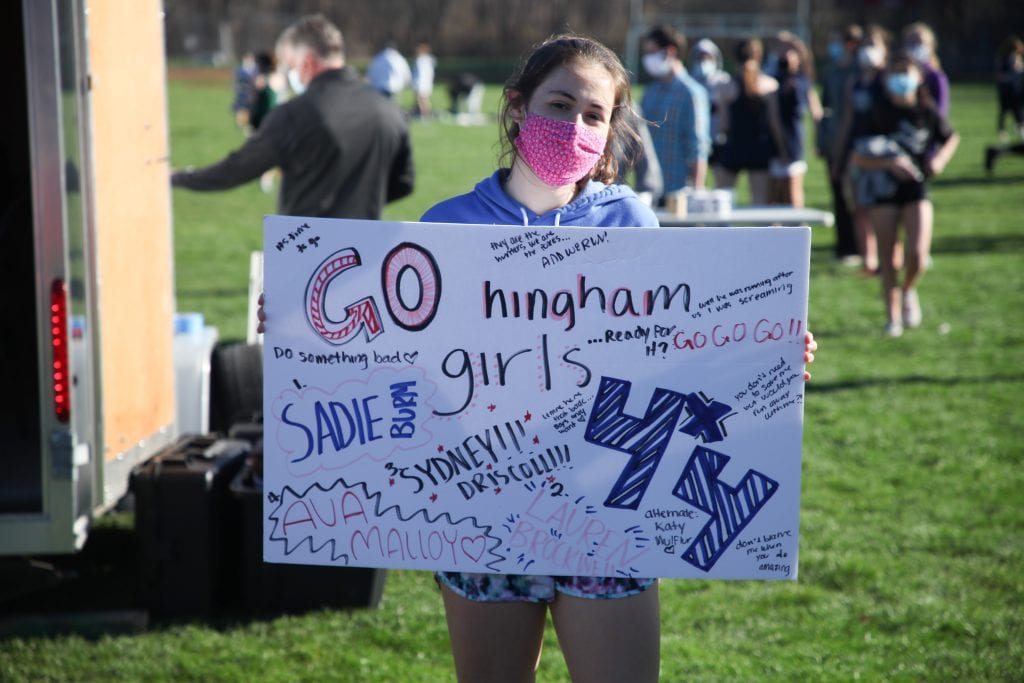 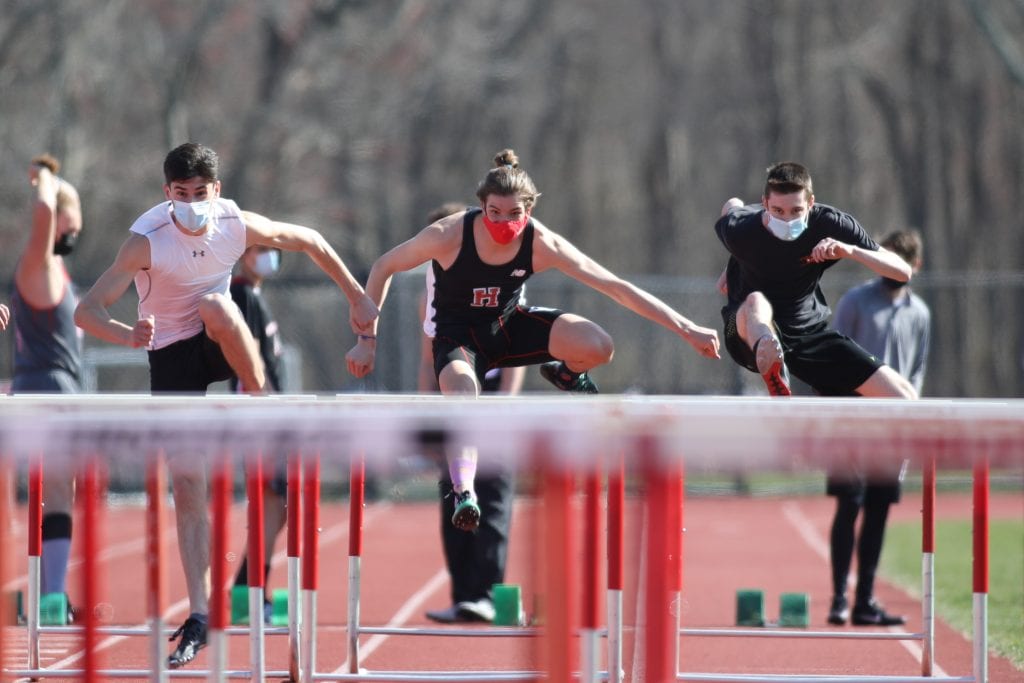 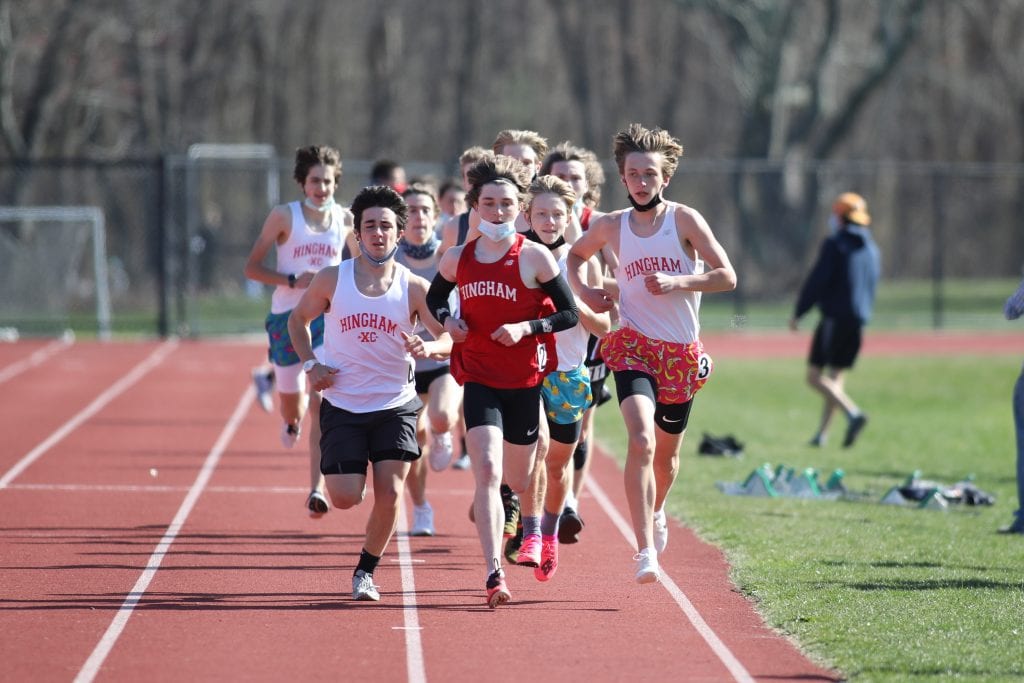 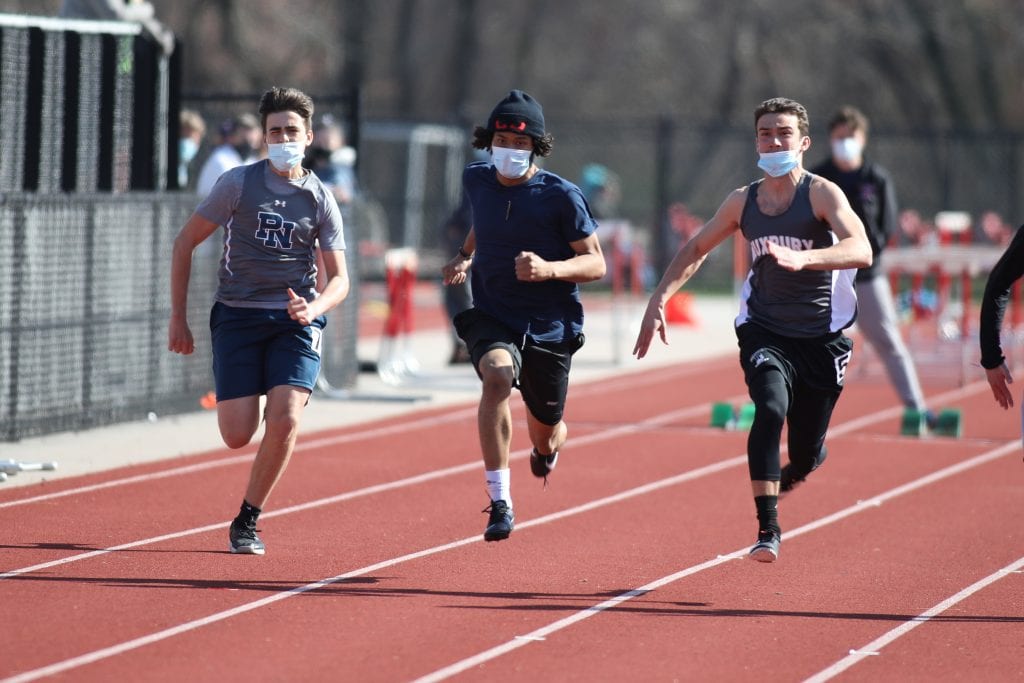 Senior Darrelle Comer (center) with a PR in a competitve 55m dash. 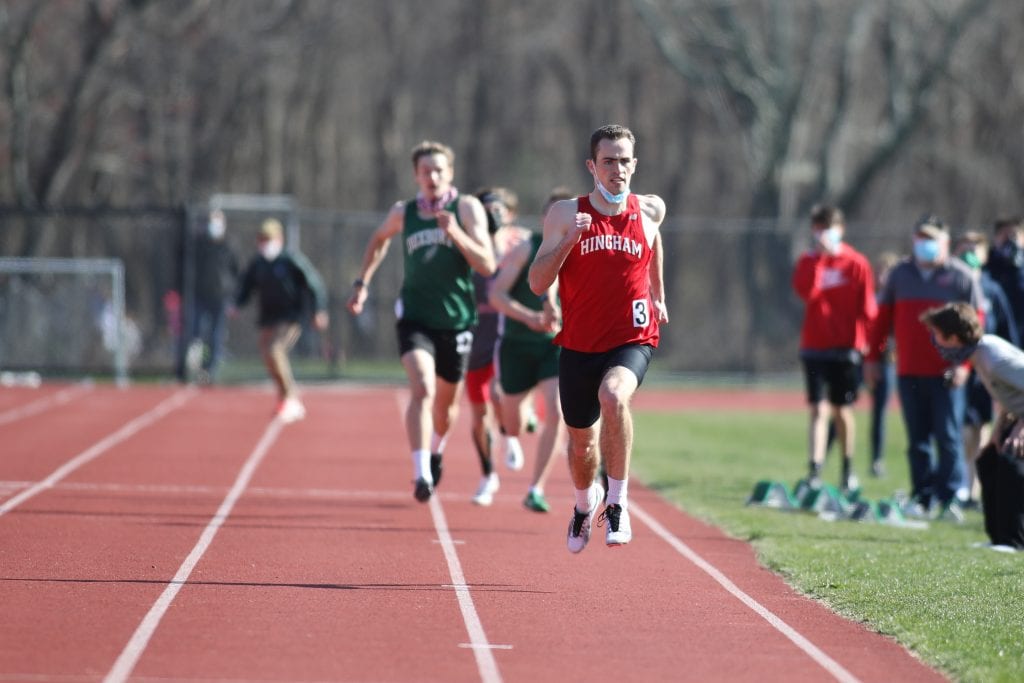 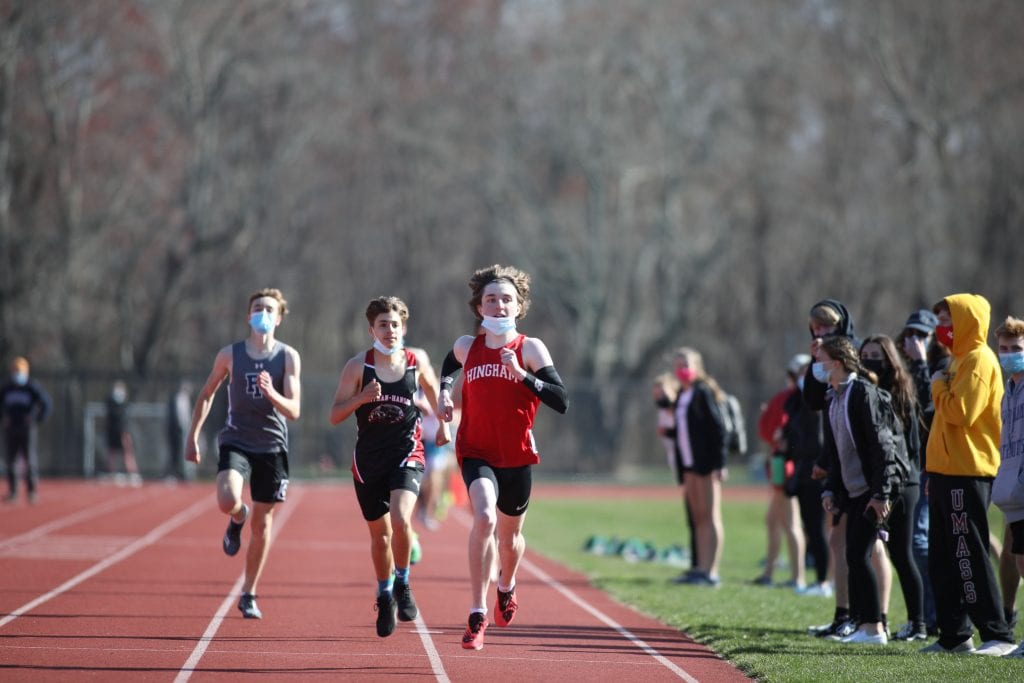 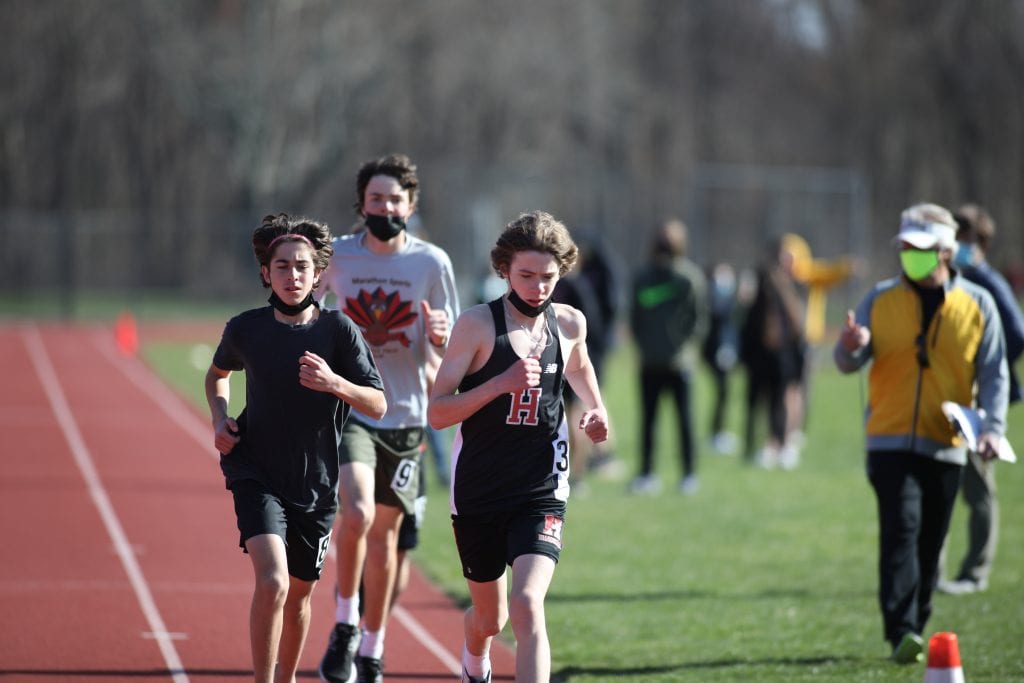 Freshman Brendan Burm (right), sophomore Michael Renna (left), and freshman Charile Matthews (back) had a strong showing in the 2 mile. 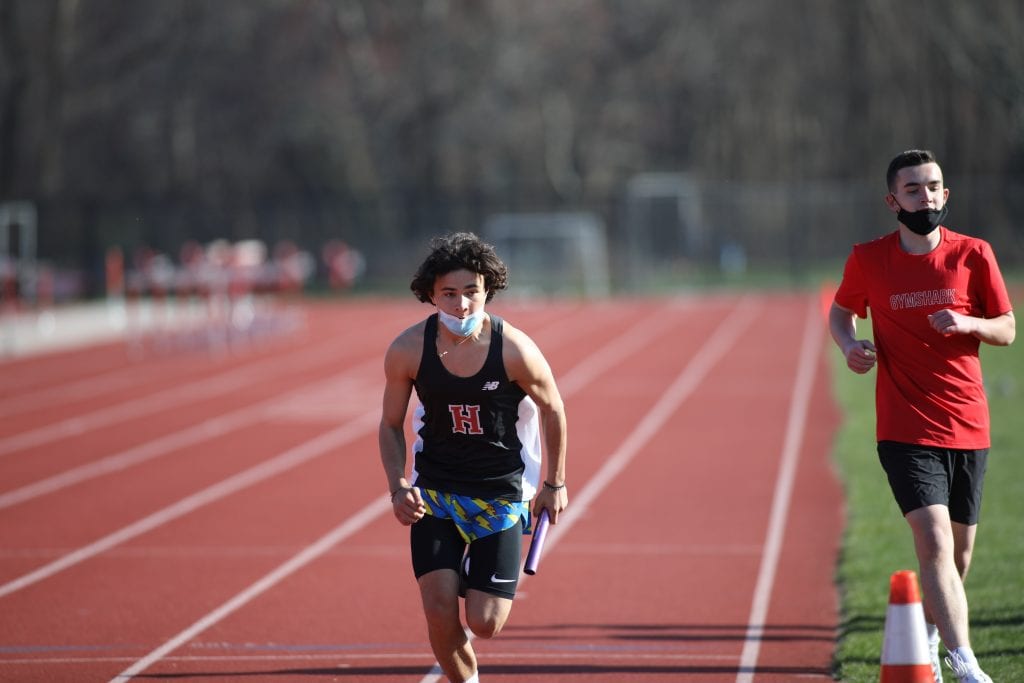 Junior Ian Belkner was the last leg of the 4x800. 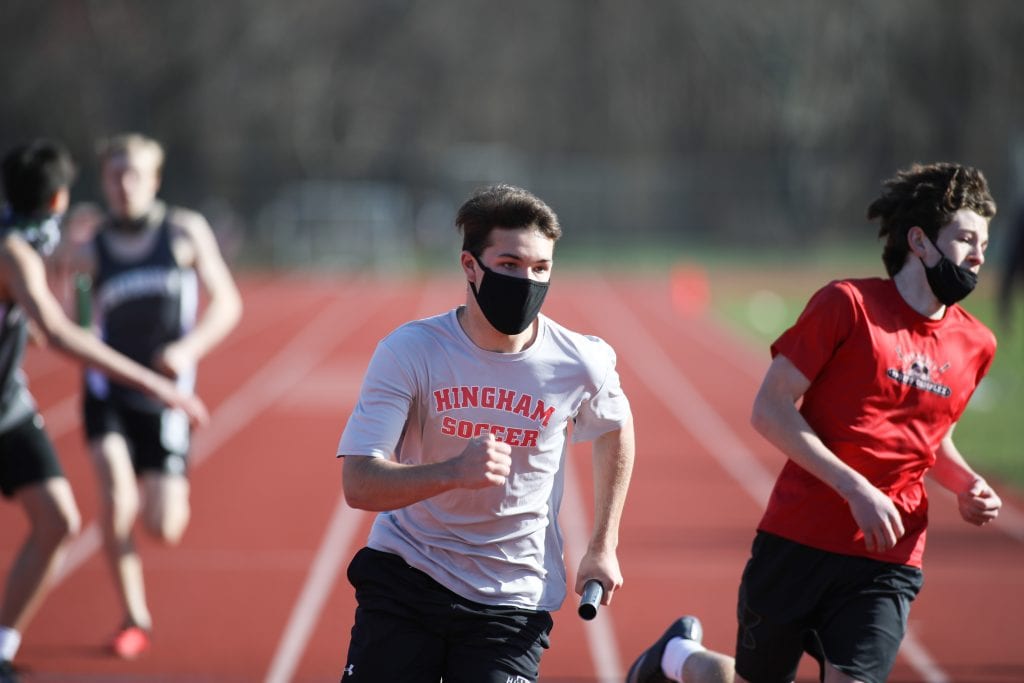 Sophomore Sam Benham takes the baton from sophomore Griffin Coppola in the 2x400.