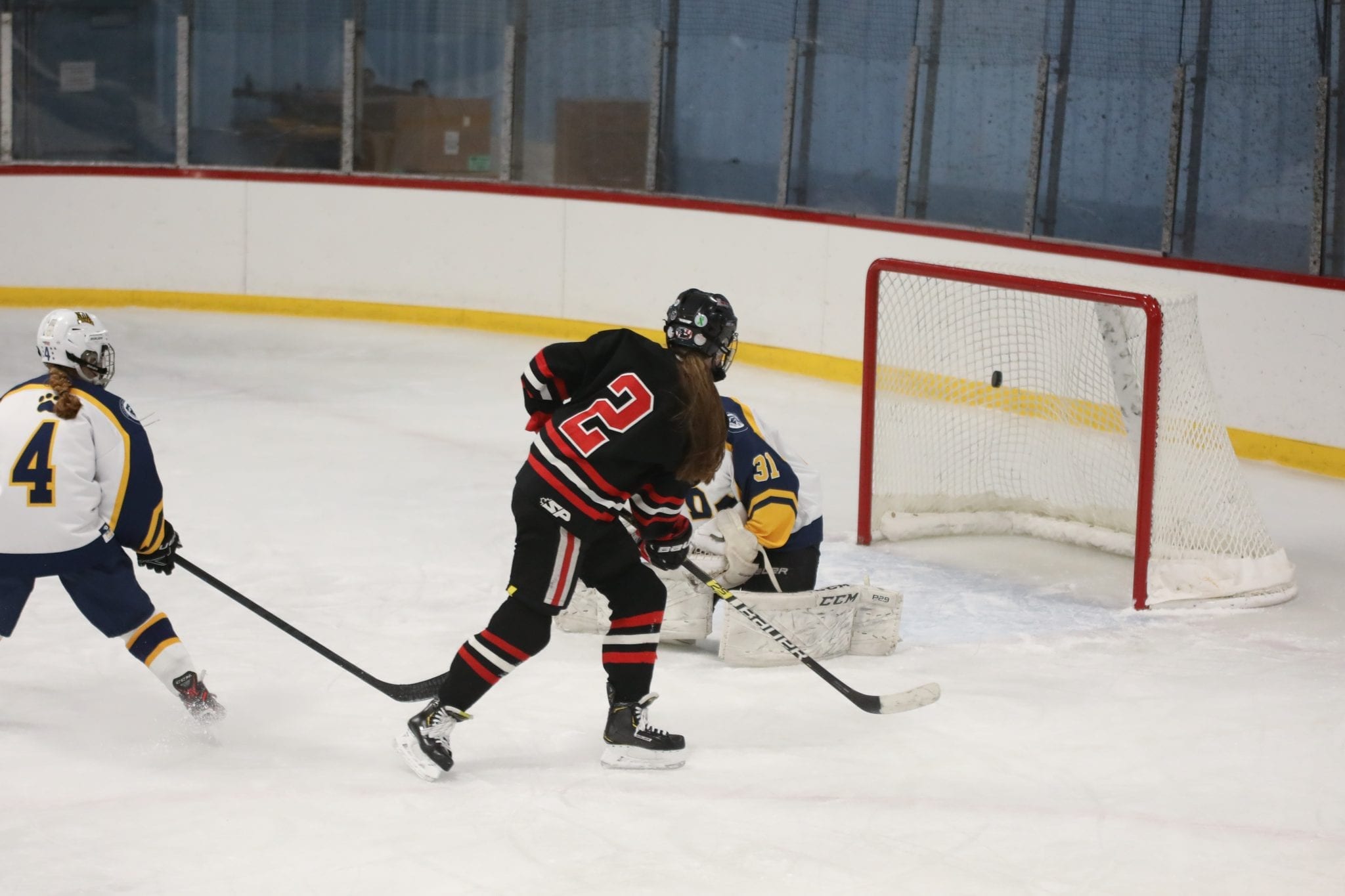 The girls hockey team faced off against their intra-town rivals NDA for the second time this season on Wednesday afternoon.  The Harborwomen fell 6-0 back on January 9th, but they have been playing much better lately and it showed in this game.

Notre Dame sophomore Lauren White scored less than a minute into the game.  Hingham settled down after that with good defense and solid goaltending from junior Amy Maffei.  The Harborwomen broke through when 8th grader Caroline Doherty buried one in the back of the net.  NDA came right back 18 seconds later and retook the lead on a goal by senior Hana Beviacqua.  Junior Ryan Maguire tied it up again on a break away from a great pass by sophomore Abbey Kennedy.  Maguire struck again on another breakaway as the puck hit the back of the net as the buzzer sounded to end the second period.

“In all seriousness, I didn’t even know there was a second left,” Maguire recalls. “I just got a good pass from one of my teammates and I was able to break through.  I just lifted my head and was able to pick my spot, on both goals, which helped me get the goals.”

Maguire’s 2 goals in the second period gave Hingham the 3-2 lead, which held up until 3:30 left in the game when sophomore Ava O’Donoghue tied it up for NDA at 3 apiece.

It was a hard fought game by both teams and was the second time this week the Harborwomen managed to bounce back against a team they lost to earlier in the season.  On Saturday, they tied Duxbury 3-3 after an earlier season 4-0 loss.

“Like any team starting off a season it’s a little hard to find out what works and what lines work,” Maguire explains. “NDA was one of our first games of the season and we were just getting into the grove of our season.  The same thing with our last game against Duxbury - we lost to them early in the season and tied them last game.  We are continually working hard at practice and getting more comfortable with our teammates.  It’s the younger girls too, incorporating them into the team and they bring a lot of talent too.  It’s just getting to know the team, working hard together in practice, it will help us get ties and wins in the future.”

It was not only a rematch for Head Coach Tom Findley of crosstown foes, it was a chance to get even with his biggest coaching rival - his twin brother John Findley.  More important than try to beat his brother, he was very happy with the way his players performed.

“It’s funny, my brother and I know how we each coach.  We run a similar program. When we play each, we kind of bait each other and stuff like that,” says the Hingham Findley.

“I thought it was a great game.  I thought it was exciting,” Findley goes onto say. “I thought we played great and carried the play.  There were a couple of instances they got some good bounces but they’re a good team, great goalie (sophomore Lily Prendergast), their goalie is fantastic.  I think the kids are starting to get it.  They are playing in the system we taught them.”

As Findley looks towards the end of the season and the playoffs, he thinks he’s finding the right mix of players at the right time.

“Caroline (Doherty) is an 8th grader.  We have an 8th grade waiver, like most teams have, and she is able play and she helps obviously, she’s a great player.  We played a lot of kids at the beginning of the year and now what we’ve done is shrunk it a little bit to be a little bit more competitive.  Our senior captains have been great also. Amy (Maffei) is solid.  Thank god she can play or else we wouldn’t have a goalie” 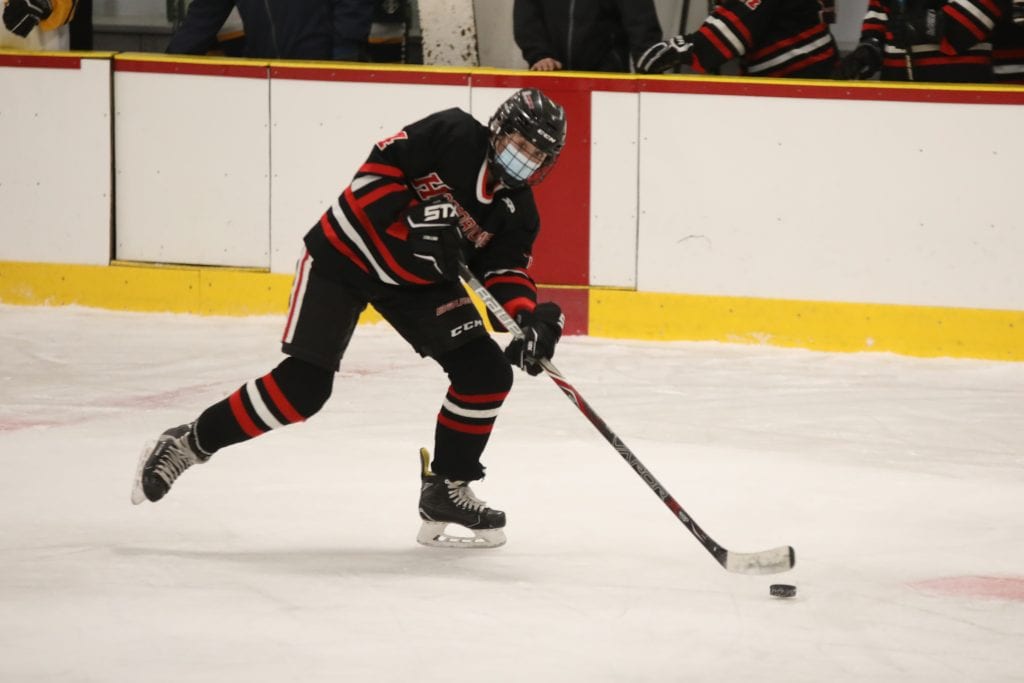 Sophomore Abbey Kennedy makes a great pass to junior Ryan Maguire who scored just befoer the end of the period. 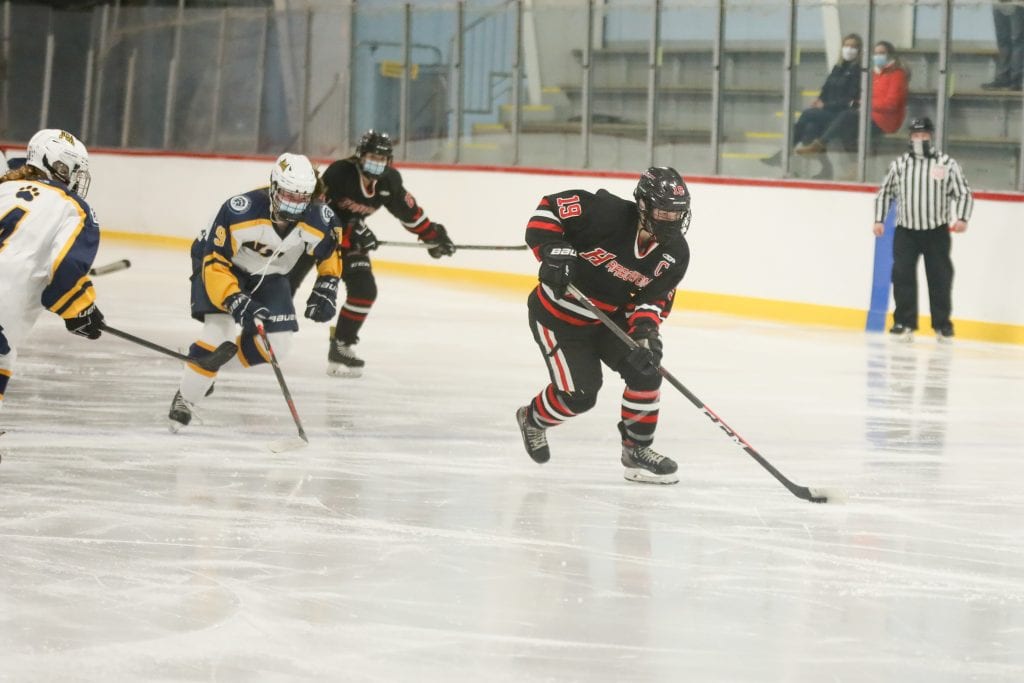 Juinor captain Kathyn Karo on a break away in the third. 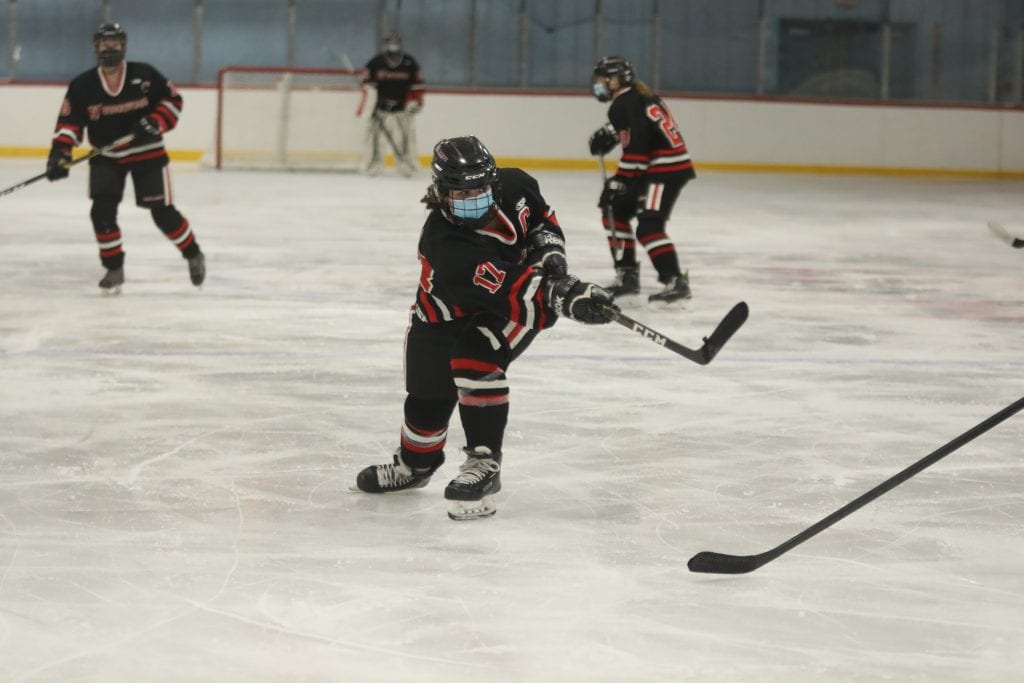 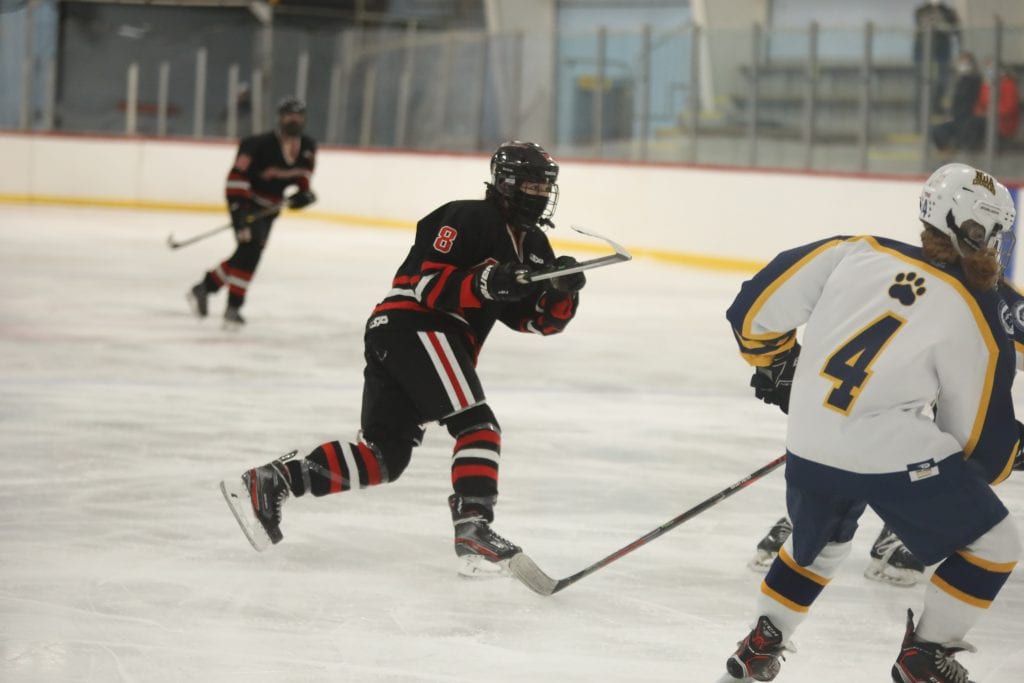 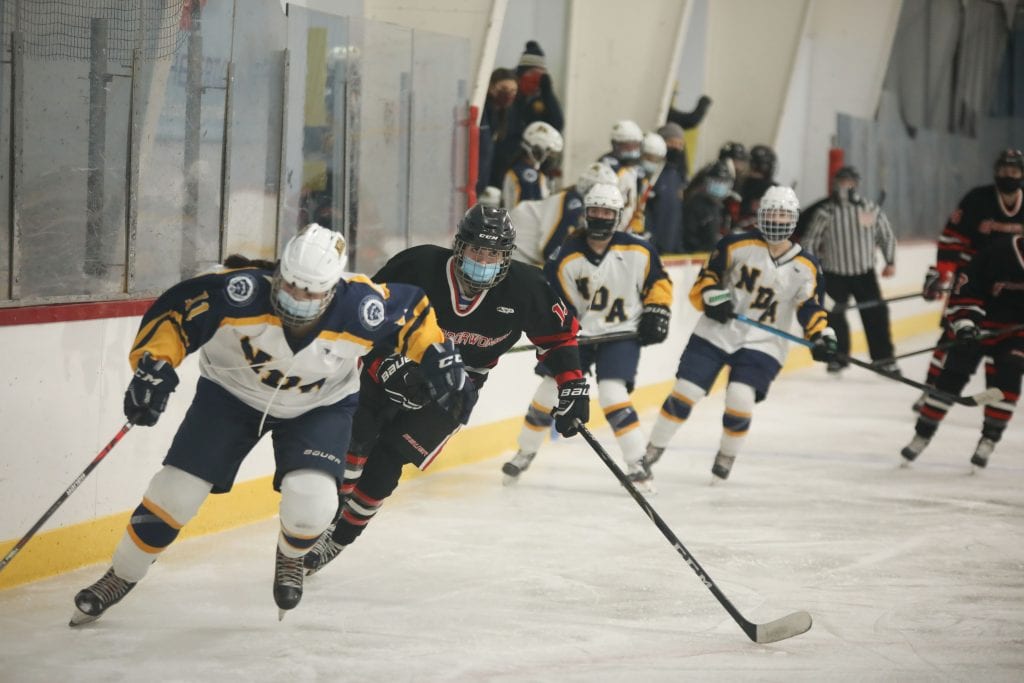 Junior Megan Moynihan chases down the puck in the corner. 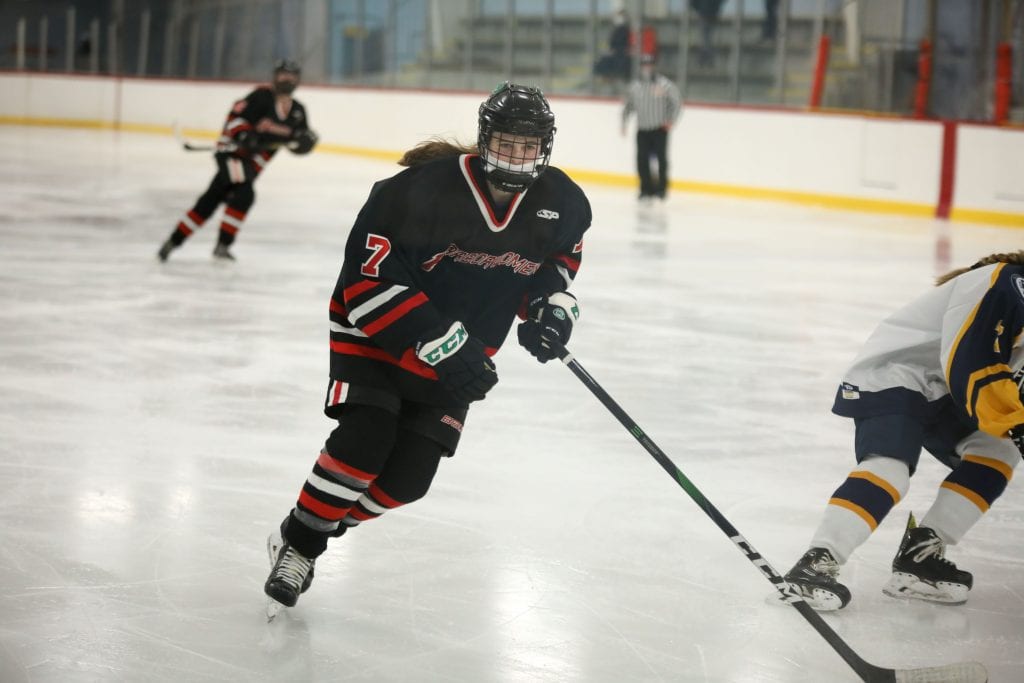 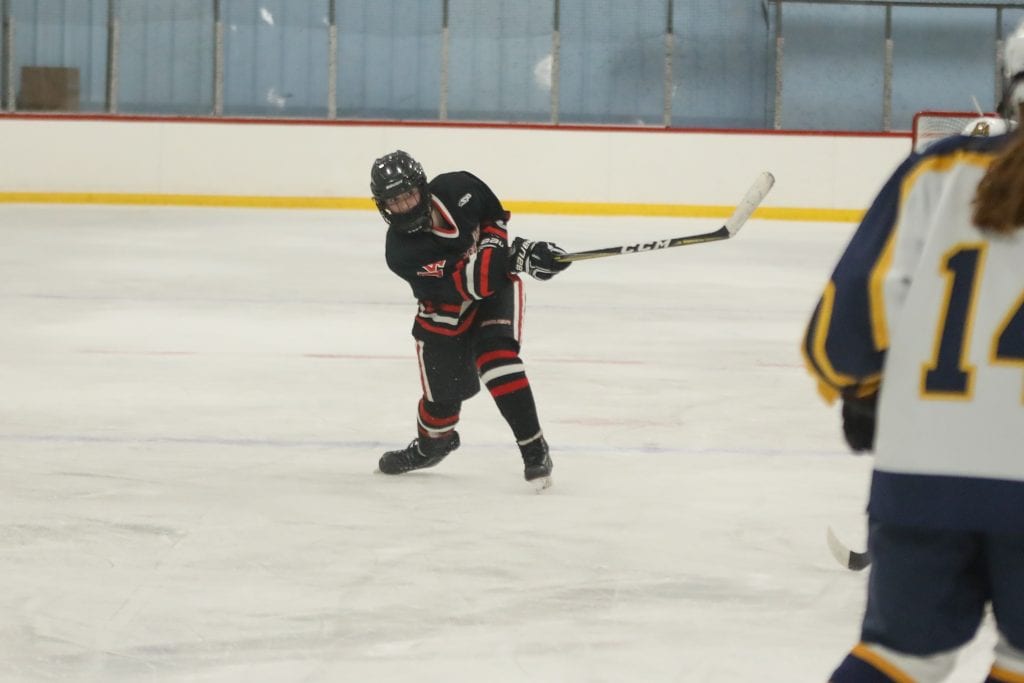 Sophomore Erin Packard fires a shot from the blue line. 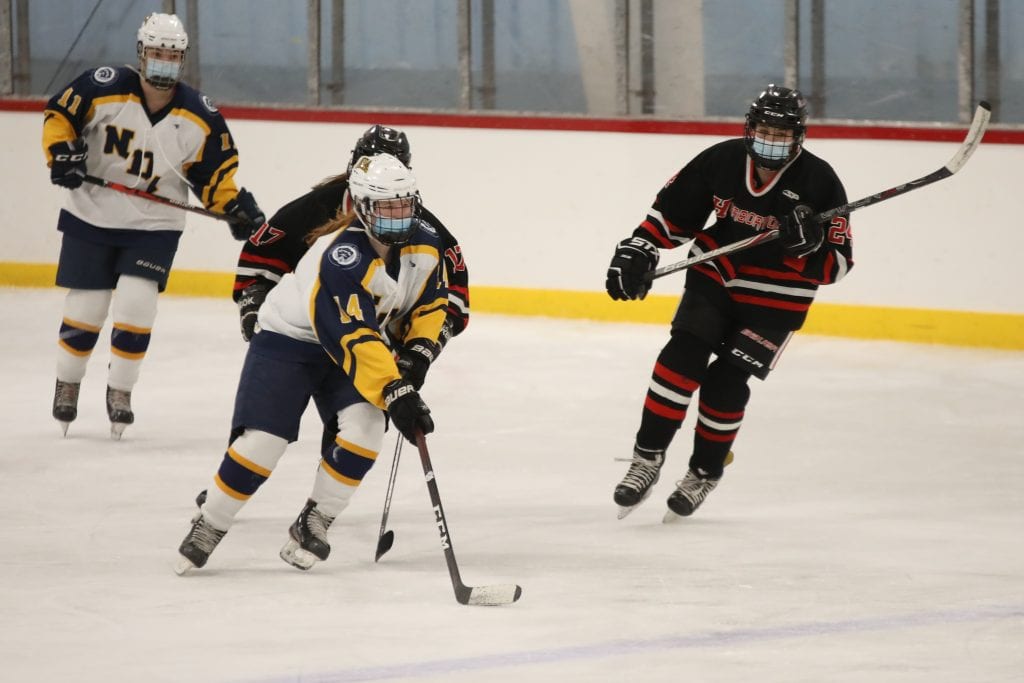 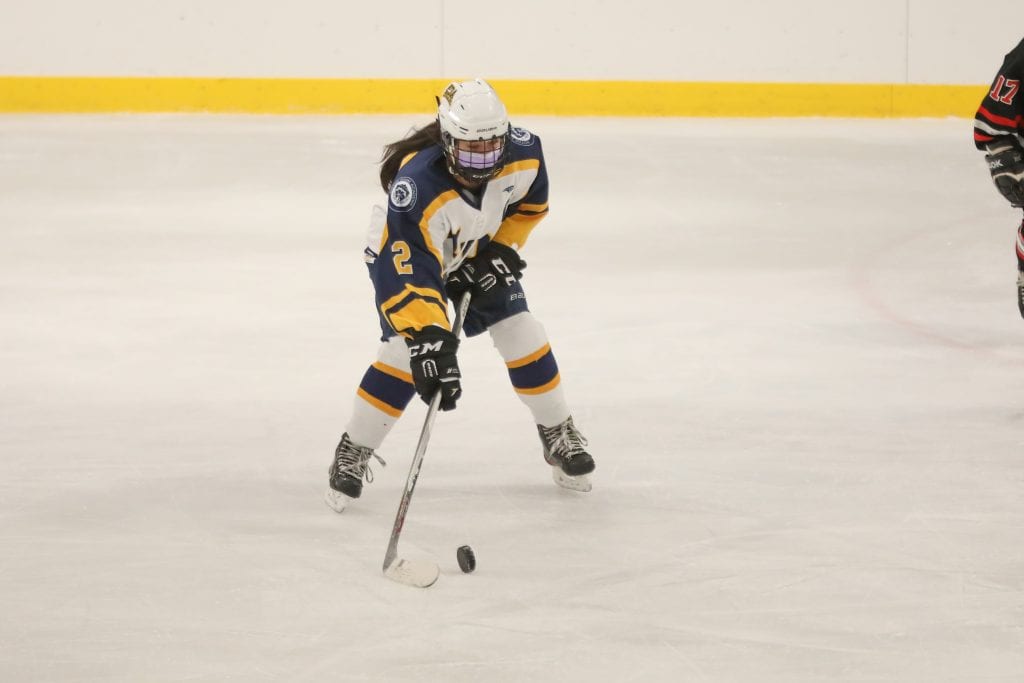 NDA's senior captain Hana Bevilacqua tied it up with 3:30 left in the game.