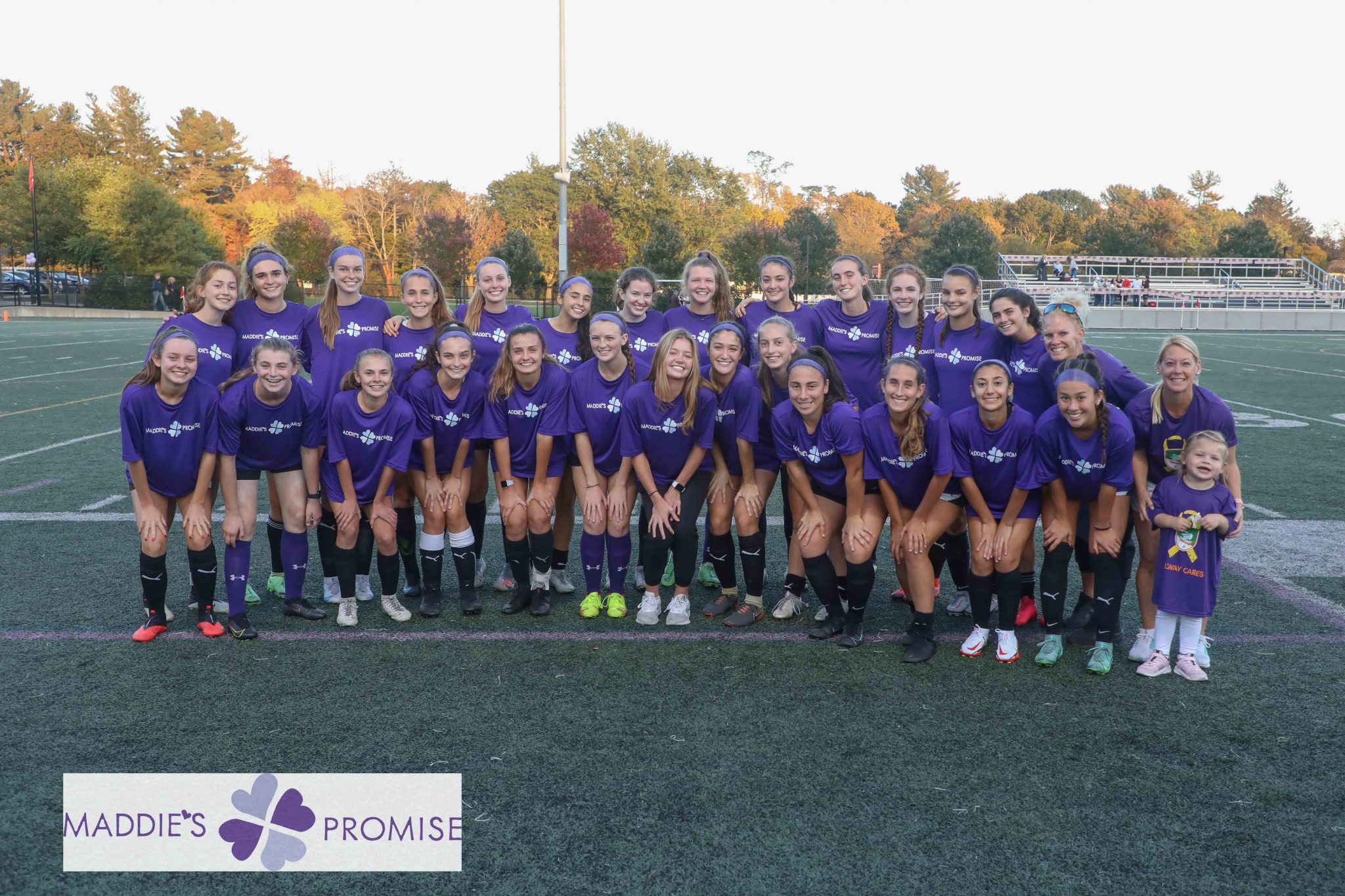 Last night was one of those days you circle on the calendar.  Not because the Hingham girls soccer team took on their top rivals Whitman-Hanson at home, but because it was time to celebrate Maddie McCoy, the inspiration behind Maddie’s Promise.  The annual event was back on this year to help raise money for research to fight and cure rare childhood cancers.  In the short time the foundation has been around, they have raised roughly $300,000 towards their mission.  They’ve given out four different grants to two research labs and more to come in the near future.

Soccer runs deep in the McCoy family.  Maddie played soccer, even through treatment and her dad Steve is the high school girls JV coach.  It’s only fitting we celebrate Maddie during the biggest match of the year for the girls so far.

“It’s overwhelming,” says Ann McCoy.  “The community support really keeps this going.  That’s what makes Maddie’s Promise Maddie’s Promise. Us, all together on this mission of trying to make some change in the childhood cancer world.  It’s going to be a long haul.  It’s a marathon, not a sprint.”

With the stands full of people, balloons in the air, and purple as far as the eye could see, the Harbormen women, forgoing their home reds for Maddie’s purple, took to the field to honor Maddie once again.

“Seeing them in the t-shirts with Maddie’s name on the back, yeah, you’re holding back the tears and it’s all bittersweet, but it’s amazing,” McCoy says proudly.

Whether it was the emotion of the night or the buzz in the crowd, Hingham was dictating play to start the game.  As the line-up was a bit different with senior captain and forward Ava Maguire out, Hingham just missed on some chances in the early stages of the first half.  Then in the 38’, appropriately enough, junior center back Maddie Aughe headed in a Sophie Reale corner kick breaking the tie.

“Super happy for her,” says coach Sarah Dacey. “She plays center back but we put her up on corners because she’s one of the few can actually head the ball.  She did a great job.  I mean Maddie has that killer mentality and the intensity.  I think she just put her body through it and scored. It was definitely a huge momentum shift and we needed that goal going into half for sure.”

It was clear the Panther’s strategy was to not let Reale beat them. In their previous meeting this season that ended in a 2-2 tie, Reale was constantly double and triple teamed every time she got the ball.  Same game plan was in place last night.  Fortunately, there is a lot of goal scoring talent on the Harborwomen squad and they needed it after Whitman-Hanson’s Olivia Borgen scored in the 64’ on a great cross corner kick in front of the net.  The last 15 minutes or so seem to be played in the WH end.  Attempt after attempt was either shot wide or saved by the amazing play of the Panther’s freshman goalie Ava Patete.  Side note: She’s going to give Hingham fits for years to come. With time winding down and fully expecting the same results as their meeting, sophomore Claire Murray got the ball in front of the net, muscled her way through two defenders and put the winning goal past Patete in the 77’.  A historic goal on a memorable night.

Enough can’t be said about the Harborwomen’s defense, not only last night, but throughout the entire season.  Anchored by senior captain Alexa Varholak, senior goalie Kathryn Wilson, senior Cara Chiappinelli, Aughe, and freshman Reese Pompeo, this group stifles even the best offenses they face.

“It was at first, as coach would say, little bit disjointed,” Varholak recalls the start of the game. “Some people stepped up big time, like Kelsey Tarby. I thought we put it away and that’s all that matters.”

“Like I said to them at half-time, it just felt a little disjointed with us,” describing the first half of the game. “Missing one of our senior captains, which you know sometimes when you are missing a player the flow just isn’t there, but I thought in the second half was night and day compared with how we played in the first half.  I thought we did a great job of keeping possession of the ball, putting them under a ton of pressure, creating chances.  I thought we did a really, really good job.”

With the elimination of league tournaments this year, unfortunately for spectators and fans around the South Shore, these two teams won’t meet again unless it is in the State Tournament.  And while these games are worth the price of admission, Dacey is just fine not seeing them again this year.

“I mean listen its fun,” she says with a smile on her face. “But I’m ready to see someone else, not Whitman-Hanson again for a little while.”

For more information regarding how you can help with Maddie’s Promise, check out their website here. 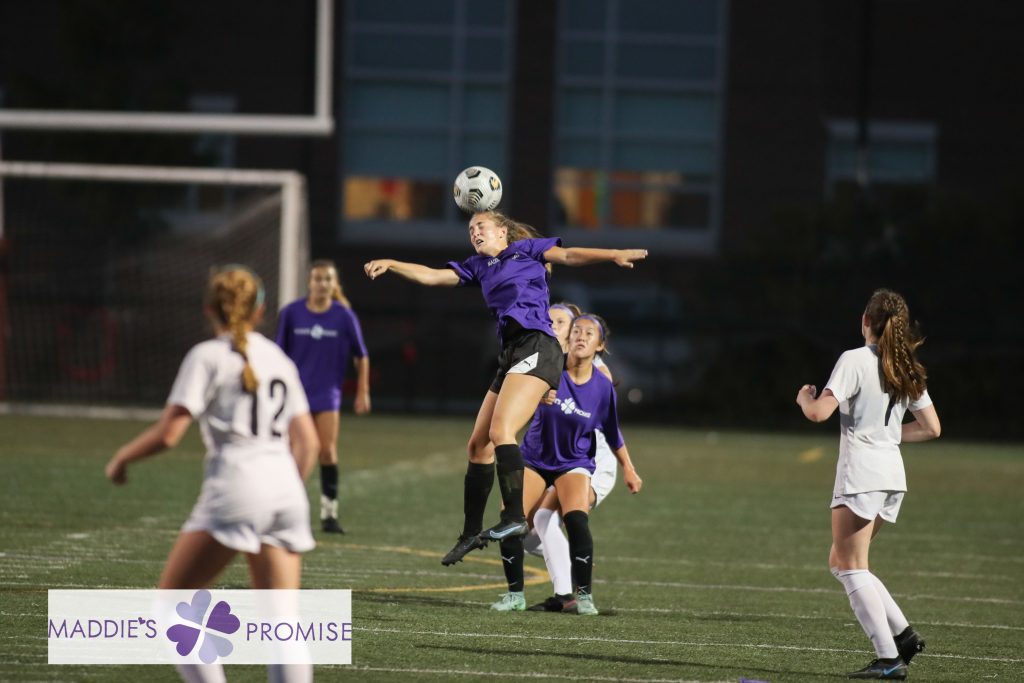 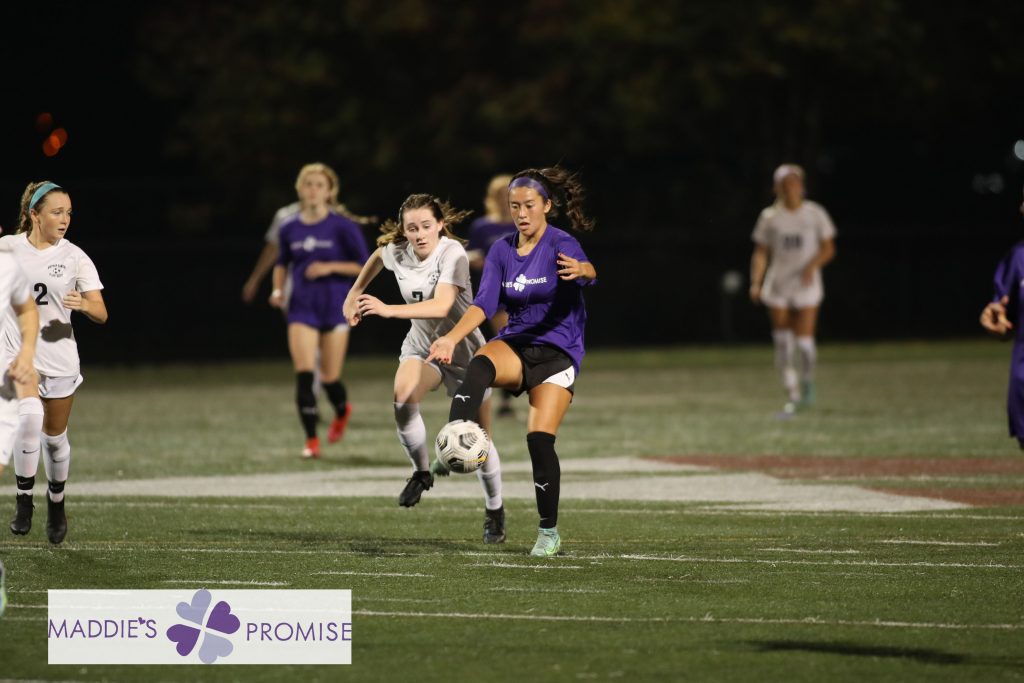 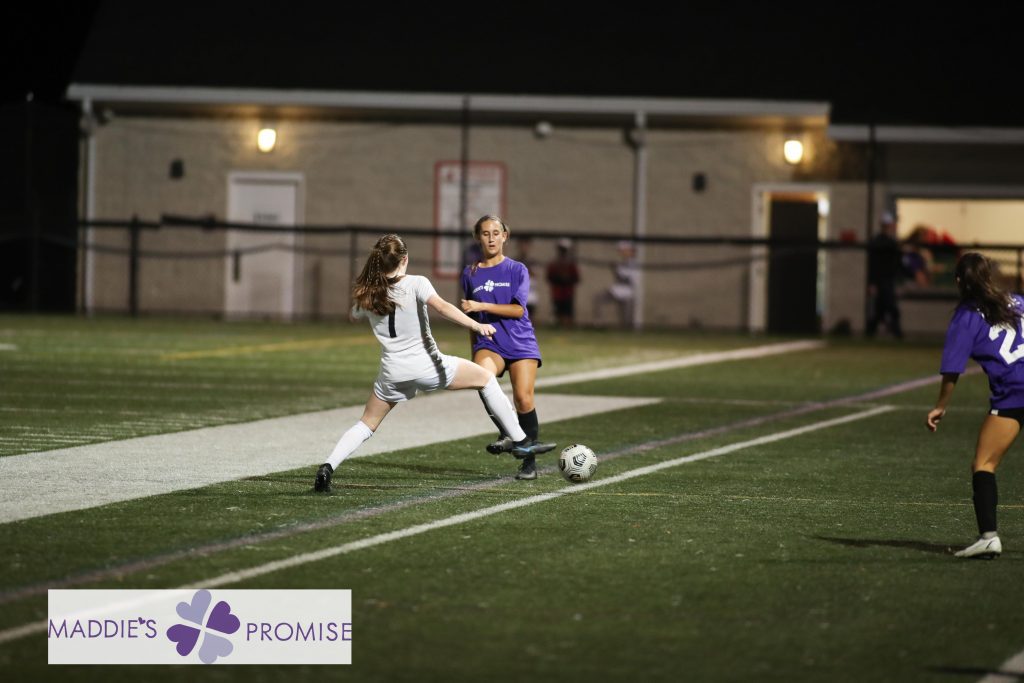 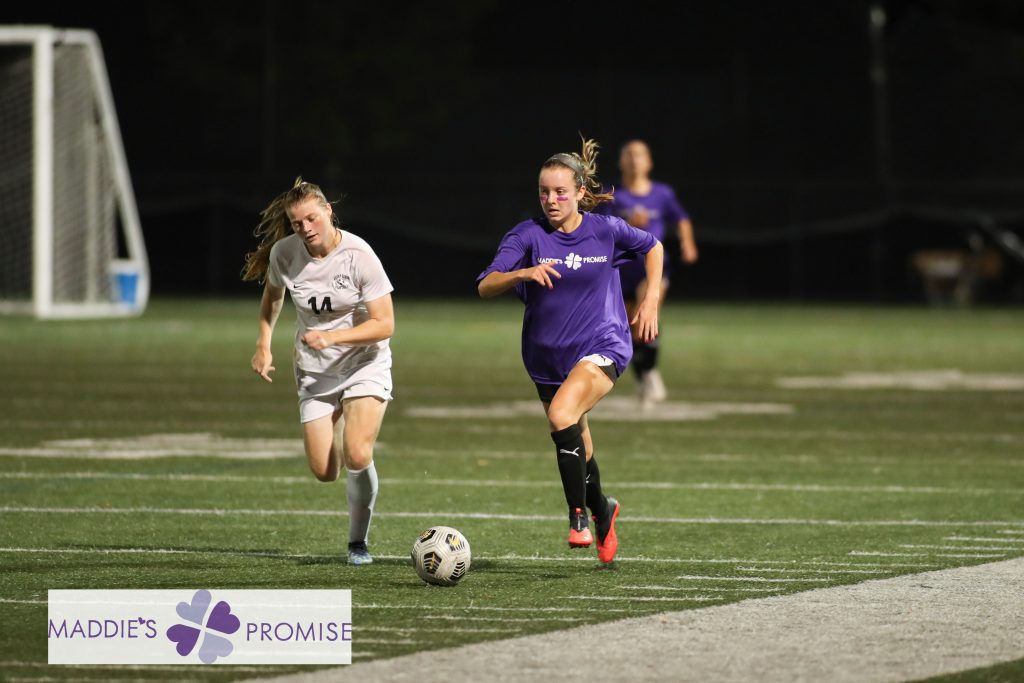 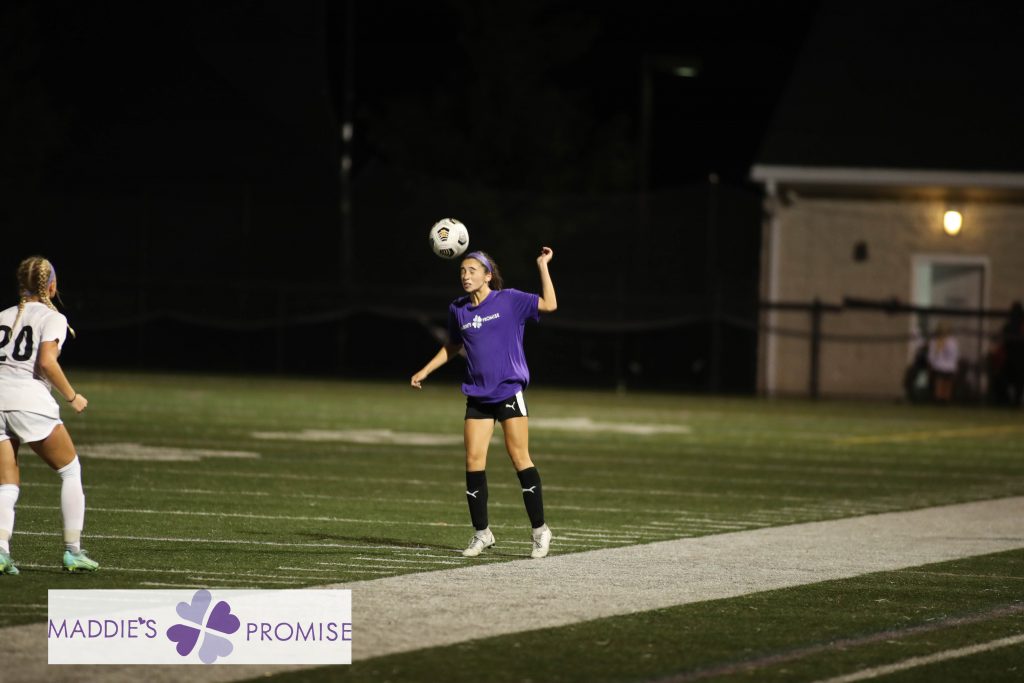 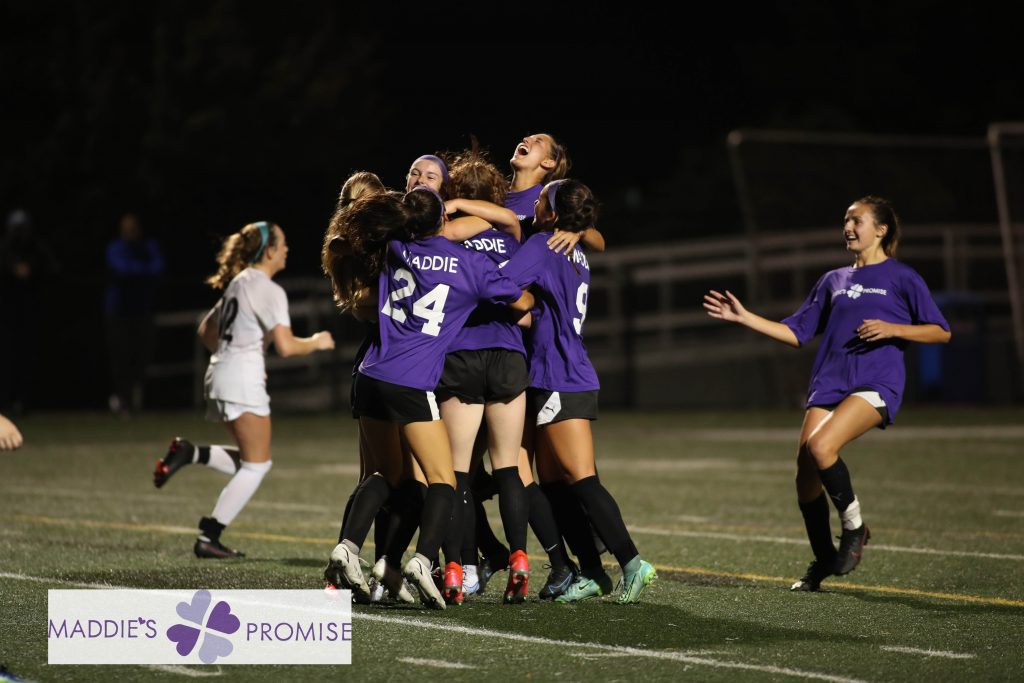 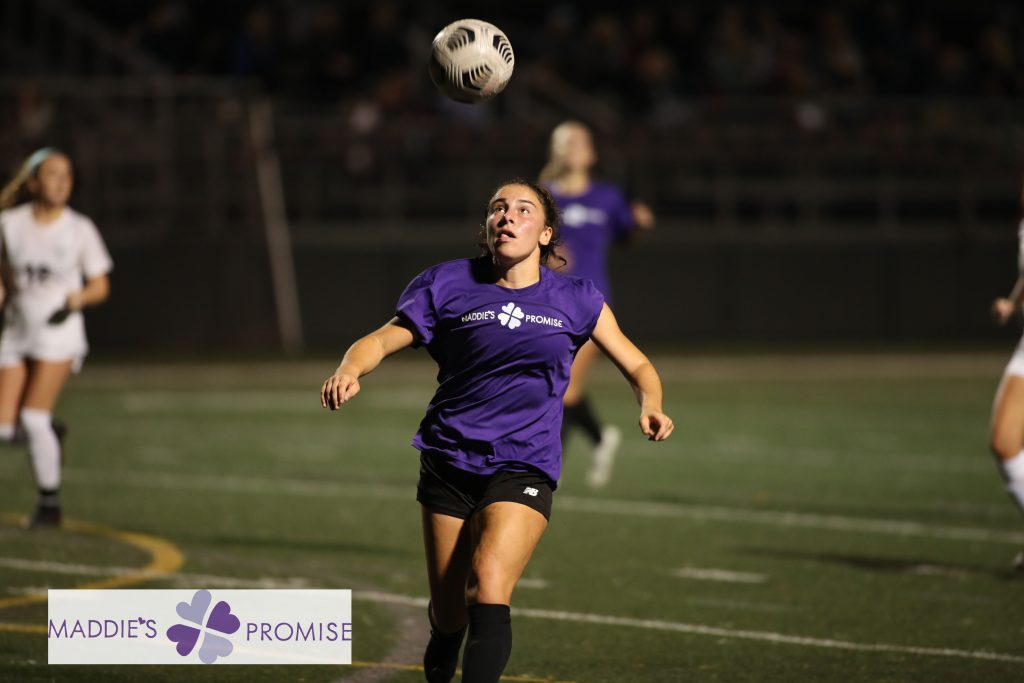 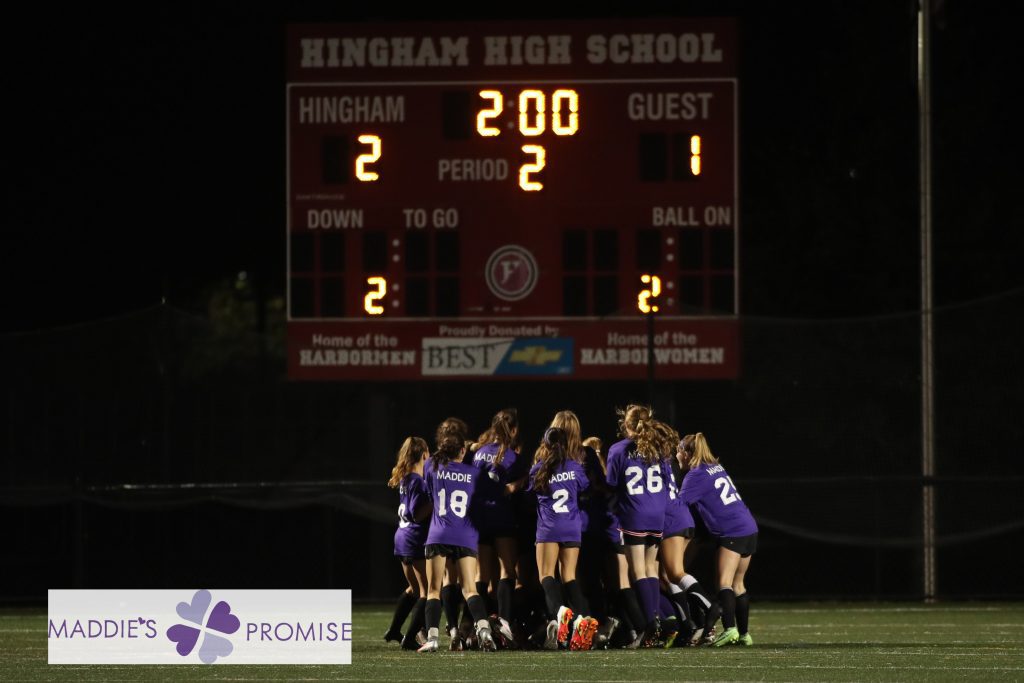