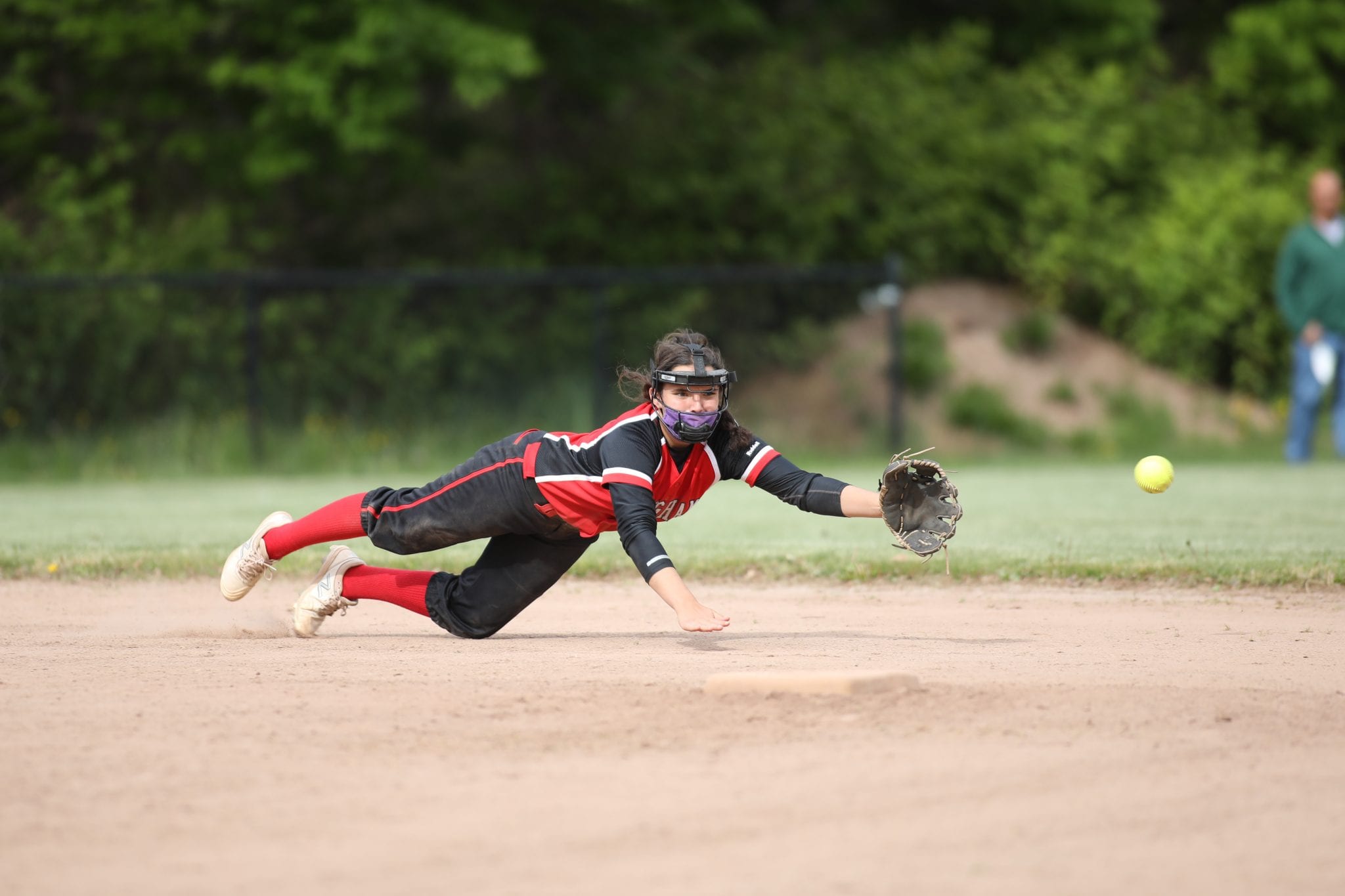 Hingham High School’s varsity softball team met their Duxbury counterparts across the street from the high school on Wednesday afternoon. Coming off a win against Whitman Hanson the day before, the Harborwomen were looking to secure two wins in a row. “We were trying to build on yesterday’s game, it was a great game….good pitching, good defensive, good hitting” mentioned head coach Chuck Green. Families set up lawn chairs and blankets to watch the game from beyond the outfield, with a healthy showing of both Duxbury and Hingham fans. Hingham won the close game 9-8 in the bottom of the 8th inning.

Hingham’s defense quickly closed out the top of the first against a pop fly and a grounder. However, Hingham was similarly dispatched from the plate, with all three hitters striking out. Immediately in the top of the second, Duxbury scored on a solo home run on a long ball out of the left field. However, they were unable to generate any offense after that point and Hingham looked to answer back. A series of pitching errors put two runners on second and third bases. A ground ball scored Sarah Holler, tying it at 1-1. This score set up an out for Duxbury and they converted, getting off the field after a precarious situation.

Duxbury attempted to generate more offense in the next inning, but Hingham shut it down. Ground balls to the outfield snuck through the second base, but a pop fly and a clean double play closed out the side for the Harborwomen. After a ground ball and stealing second base, Hingham was in scoring position with Jess Mulrey up to bat. A line drive to the outfield scored junior Madison Aylward and made the game 2-1 in Hingham’s favor. With no more scores in the inning, Duxbury tried to go back to work and take the game back. However, two ground balls and a short pop fly ended their hopes and Hingham couldn’t do much else.

The top of the 5th brought a new side to the game. Duxbury filled the bases through a walk and errors. However, Hingham ended the situation with a final out and got off the field without allowing a score. Hingham found more offensive success. A grounder and a very successful bunt placed runners on the corners, which were soon advanced for the 3-1 lead. A double play killed all of Hingham’s momentum and cleared the bases, but hits by Holler and Lilli Carpenter gave Hingham hope, however short due to a strikeout. Duxbury put themselves in scoring position after a fly ball to left field and immediately capitalized on it with a ground ball. A walk and stolen bases advanced runners to second and third bases, and a bunt tied the game 3-3. However, a pop fly and a strikeout left Duxbury unable to capitalize on their other runners and Hingham left the field again. A line drive for Hingham put two runners on second and third base but was called out at home after attempting to steal on a loose ball. Despite this, a ground ball put Hingham back ahead by one and ended the inning.

Both Duxbury and Hingham had a big 7th inning. Duxbury started it off by quickly loading the bases from pitching errors. Two pop flys to the outfield scored two runs and two more runners were in scoring position. These eventually scored after a ground ball ran past over third base, and one more was signaled home on a ground ball. After this intense offensive spree, Duxbury was ahead 8-4, scoring 5 in the inning. Green realized the pitching issues his team faced, commenting, “we made them look like a better hitting team than they are because we were behind in the count.”

This extended the game and gave back some of Hingham’s momentum. “For a young team, a fledgling team, to come out [after being] down four runs in the last inning to come back and tie, hopefully, that’s going to build some confidence for them,” noted Green. This forced Duxbury to once again take the plate, and Hingham was significantly better on defense and allowed only one hit.

Hingham went into the bottom of the eighth looking to end the game. Since Duxbury didn’t score the last side, Hingham only needed to bring one home to win. Mulrey hit a line drive to the outfield and Holler followed it up with a ground ball to put runners on the corners. A sacrifice fly ball to center field by Carpenter ended the game as it brought the runner on third base home. “I was very proud and impressed with them,” celebrated Green after the comeback. 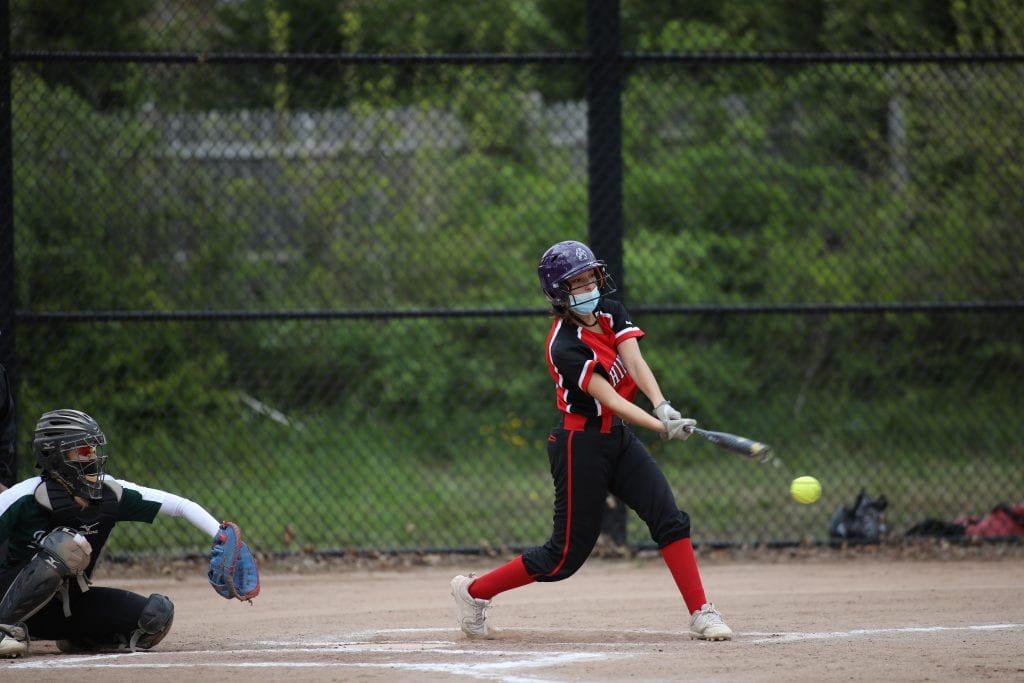 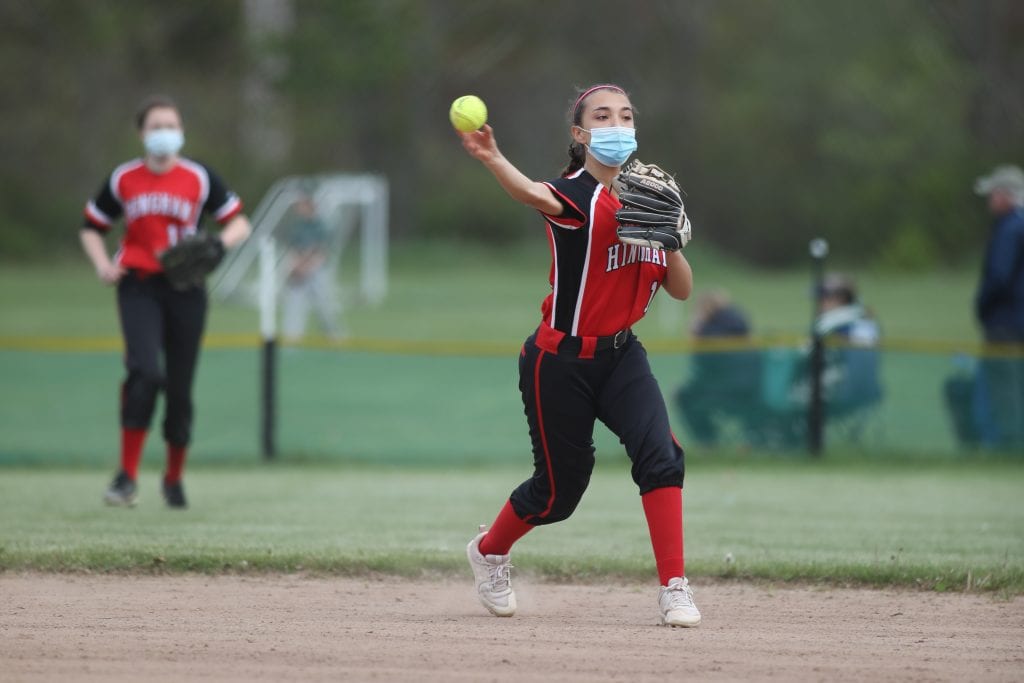 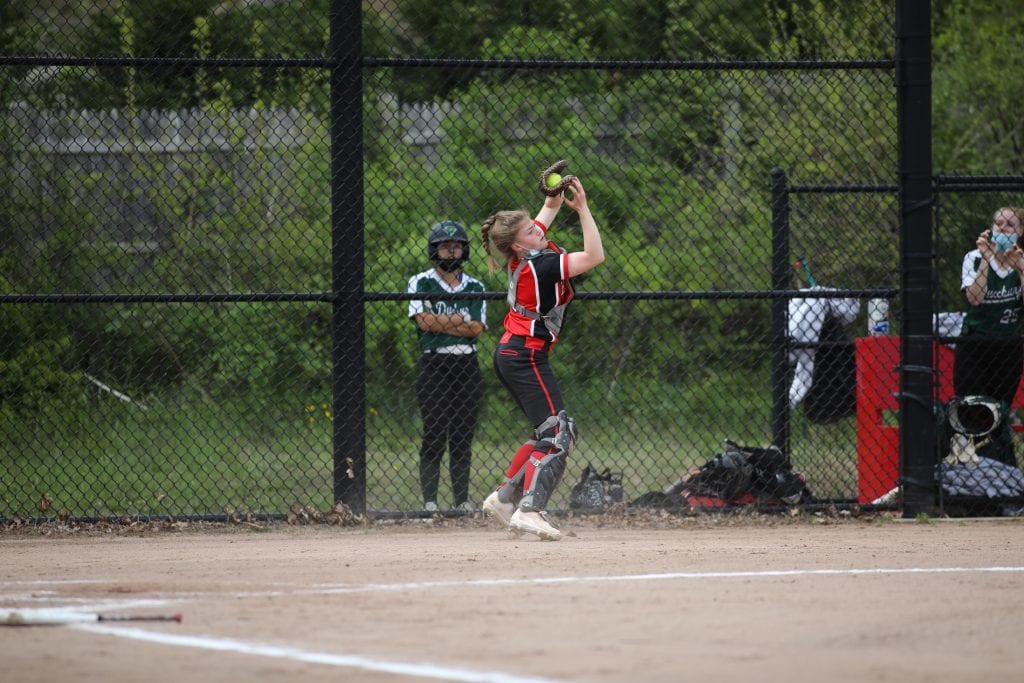 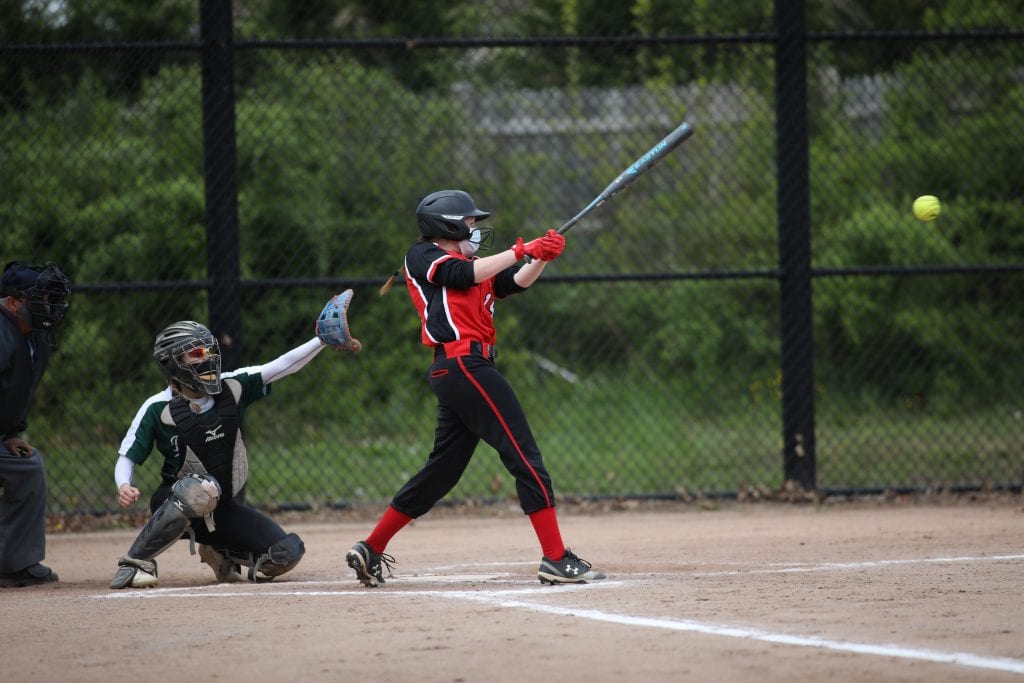 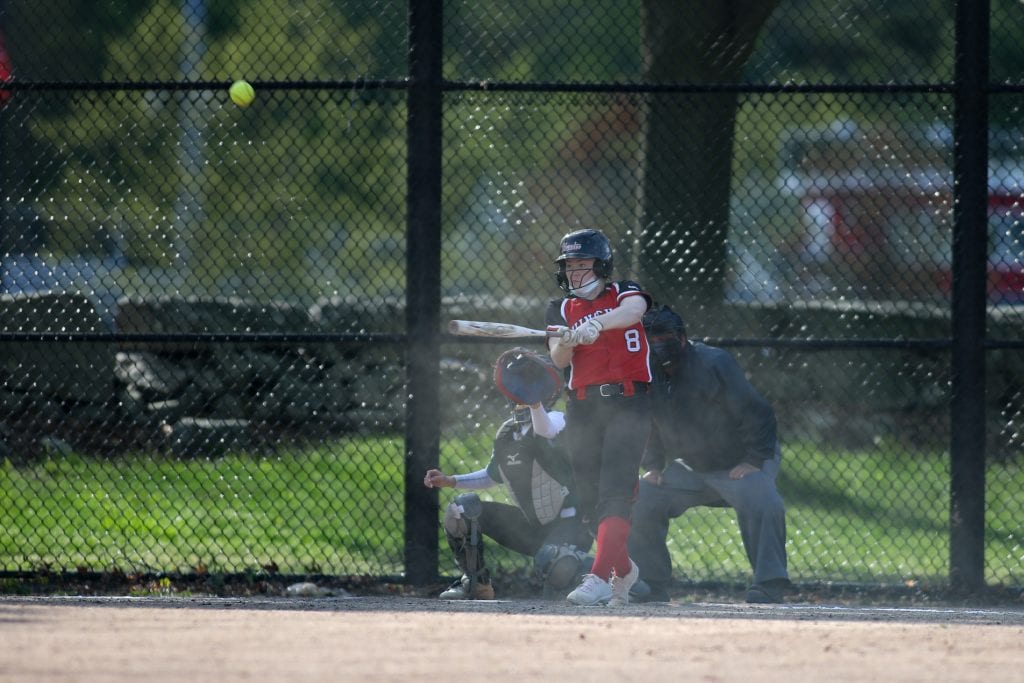 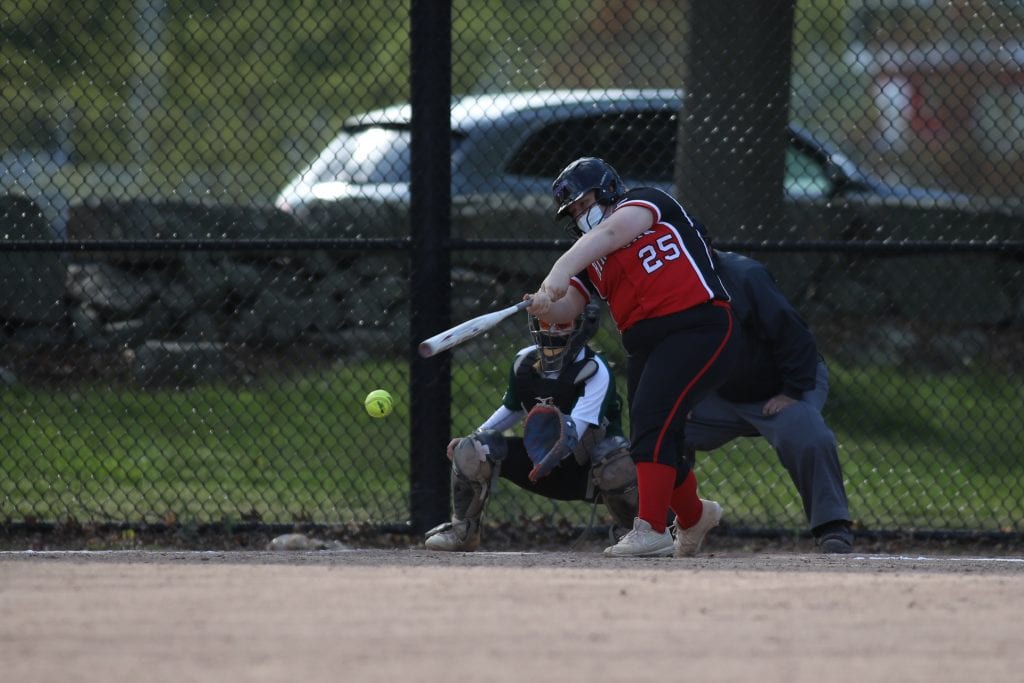 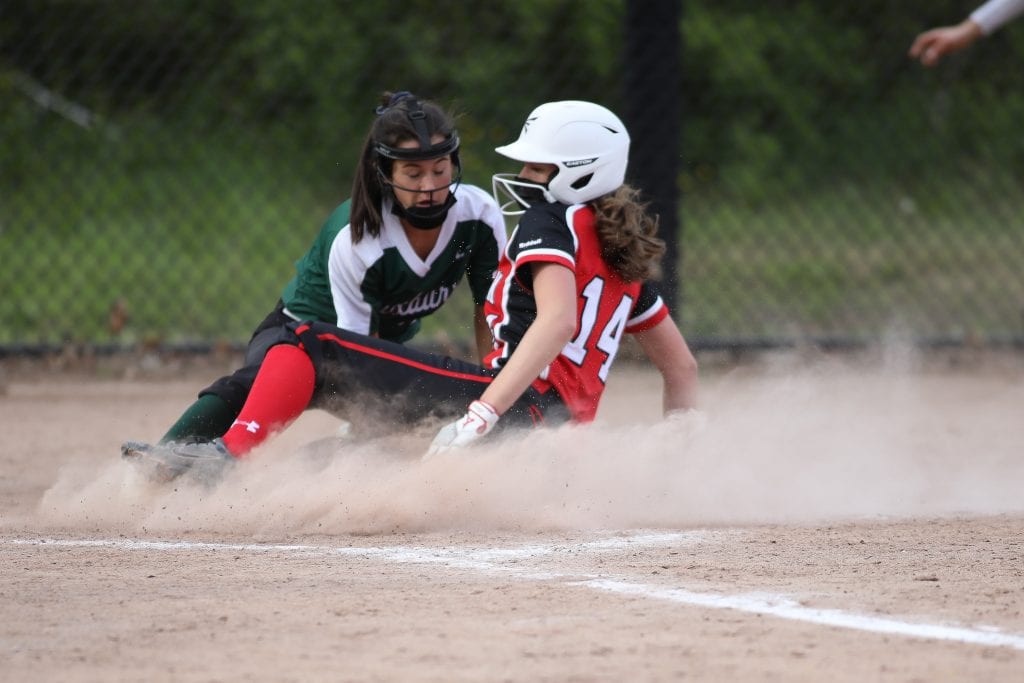