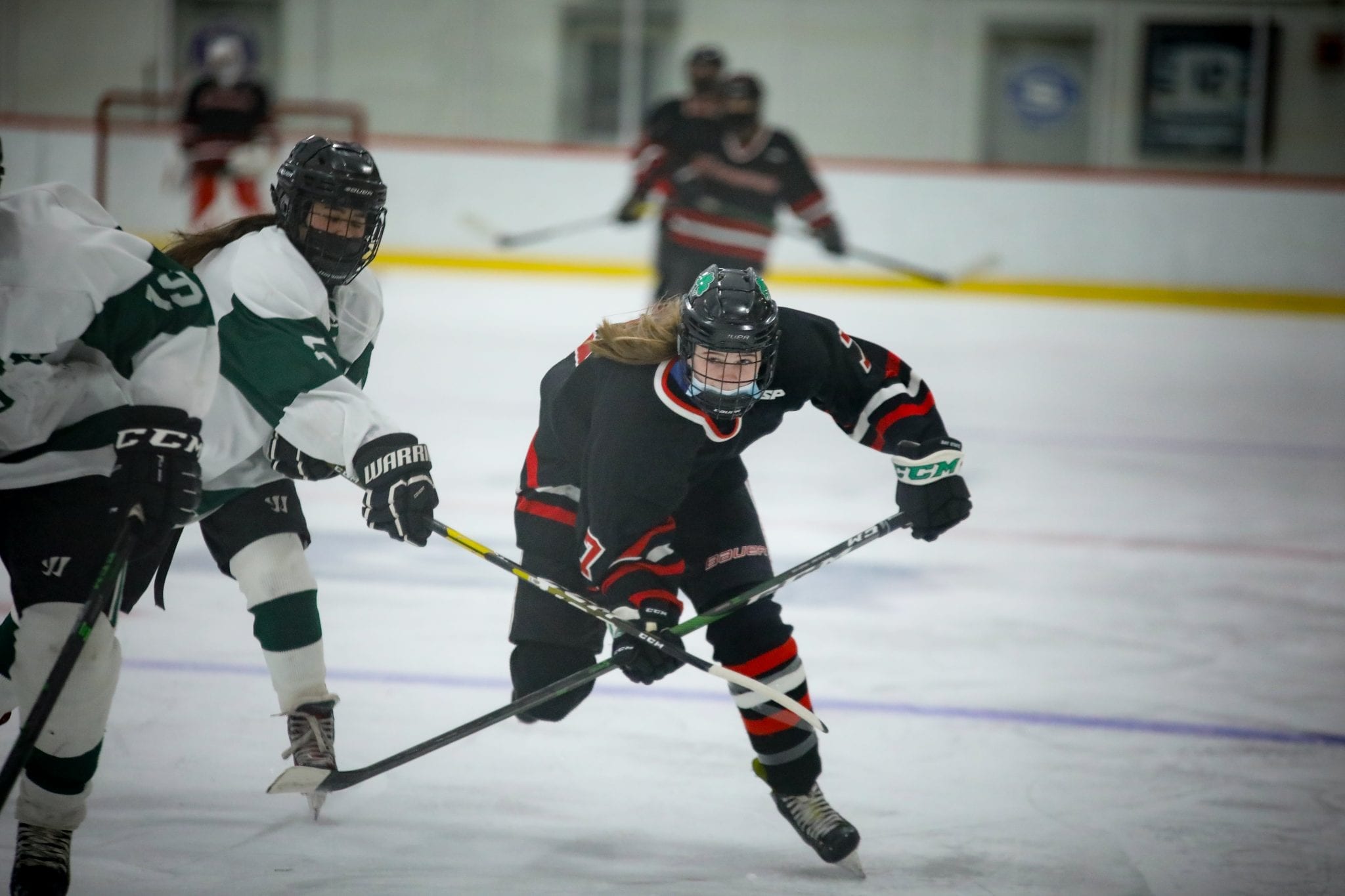 In the semi-finals of the Patriot Cup, the Hingham Harborwomen hockey team faced off against the Duxbury Dragons in Bourne, Massachusetts. After Hingham shut out Cohasset/Hanover 7-0 and Duxbury won 4-0 against Quincy/North Quincy, the two teams met on February 17th to decide who would continue onto the finals. Both teams had solid seasons, with Duxbury going 12-1-1 and Hingham 5-5-3 before meeting at the Gallo Ice Arena.

The first period was full of a back and forth playstyle with many opportunities. Hingham had two power plays before the halfway point of the period. However, Duxbury’s stalwart defensive effort kept the Harborwomen to just one shot in the first power play and created their opportunities short-handed. As the first period ticked down, Duxbury controlled the puck, spending the last two minutes of the period in their offensive zone. Hingham Coach Tom Findley spoke about the missed opportunities in the first period, mentioning that, “we had them on their heels.... in the beginning of the game.” Although Hingham's 8th grade goalie Brynn Scott made some great saves under pressure, Hingham was unable to regain possession for the rest of the period. This offensive effort would set the tone for the rest of the game.

Coming into the second period, Duxbury continued the pressuring advance, scoring after a long sequence of zone time and icings. Four minutes into the period, sophomore McKenna Colella scored from the blue line, giving her team the early lead. After some missed breakaway opportunities by Hingham and tighter pressure by Duxbury, forward Ayla Abbans gave Duxbury the two-goal lead on a breakaway. The sophomore intercepted the puck off a change for Hingham and scored top shelf to secure the win for the Dragons. When asked about Duxbury’s second goal, Findley acknowledged how close the game was, “When those small little mistakes happen, the puck can end up in the back of your net like it did there.” The third period also consisted of many missed opportunities for Hingham, including a late third-quarter power play. However, Duxbury’s defense and goalie Anna McGinty worked hard to break up Hingham’s opportunities and kept the Harborwomen scoreless.

“We played good enough to win but we couldn’t score,” remarked Coach Findley, speaking of the multiple breakaway and power play opportunities Hingham could not convert on. He added that Duxbury’s defense was on point, giving credit to their freshman goalie Anna McGinty. “Their goalie played well, I give (her) a lot of credit.”

Going into the next season, Findley recognized the youth of his team, “we only have three seniors.” He believed the most influential improvement that could be made over the next year would be how the team deals with high pressure games. Findley emphasized and reflected on the importance of, “just being able to step up in situations like this.” He also spoke to the fantastic team culture and lack of drama that was carried throughout the season. “I’ve coached for 18 years at the high school and this was one of the best teams I've ever been around.”

Duxbury will play against Pembroke in the championship game Friday at 5:30. Congratulations to the Harborwomen and the Dragons for a fantastic season and their run in the Patriot Cup. Click here to view the previous games of the Harborwomen's run through the playoffs on Hingham Athletics' YouTube Channel. 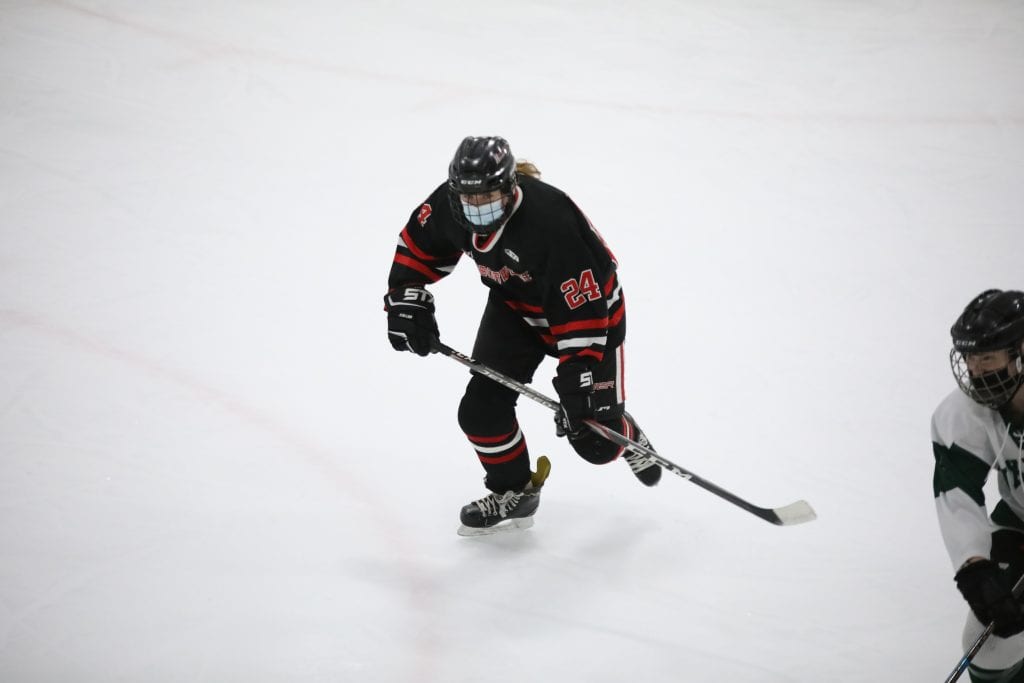 Sophomore Abbey Kennedy skates up ice in the first period. 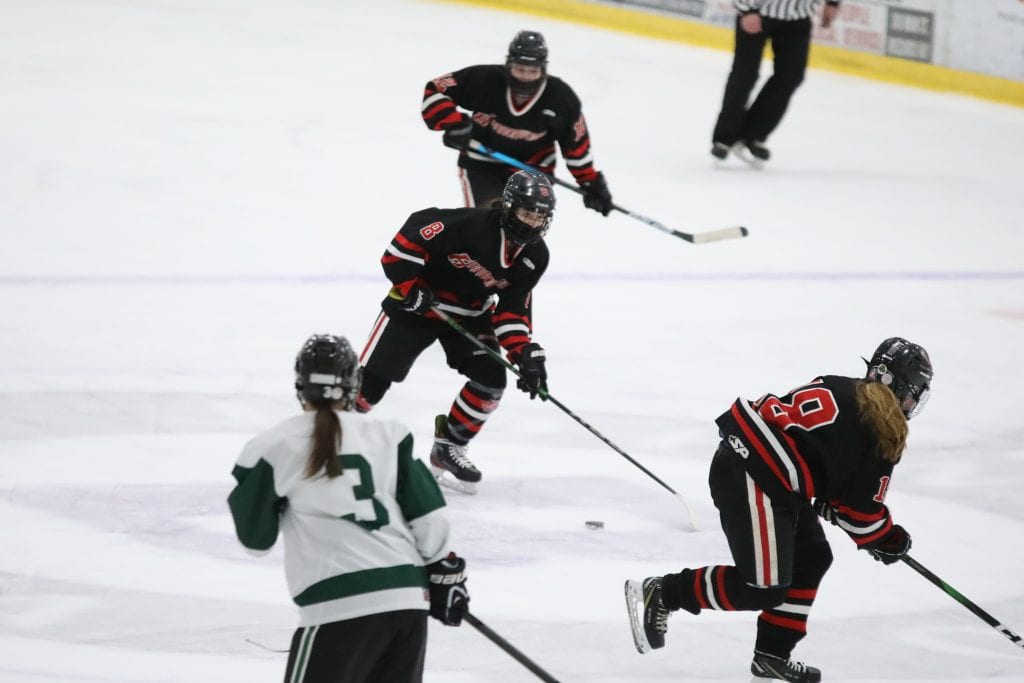 Freshman Reese Pompeo breaks the puck out of her zone in the first period. 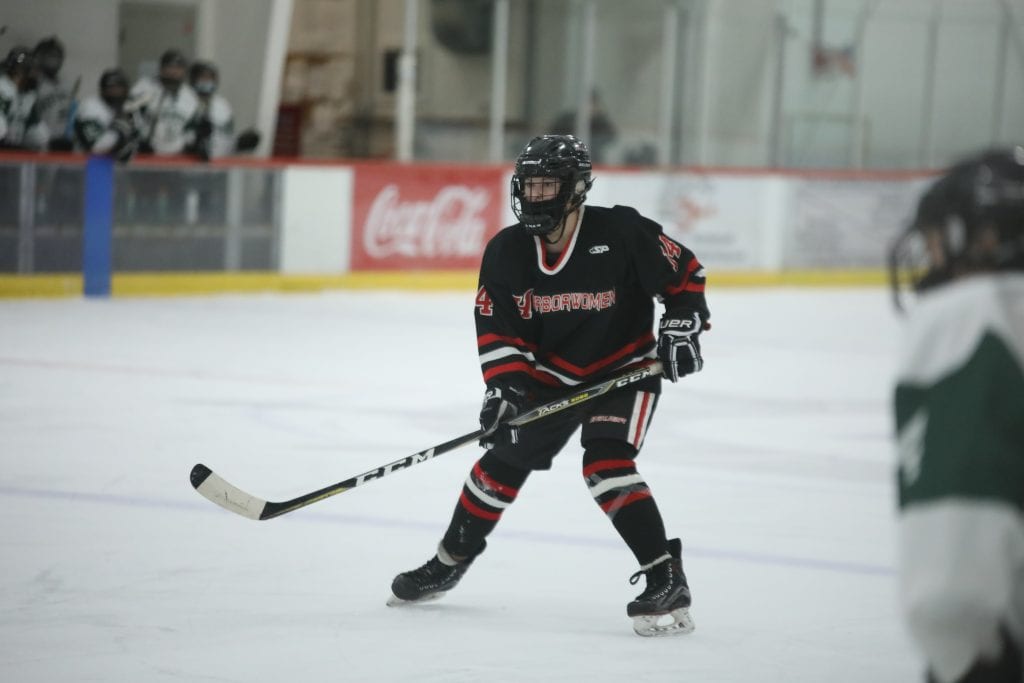 Sophomore Erin Packard looking for a pass inside the Duxbury zone. 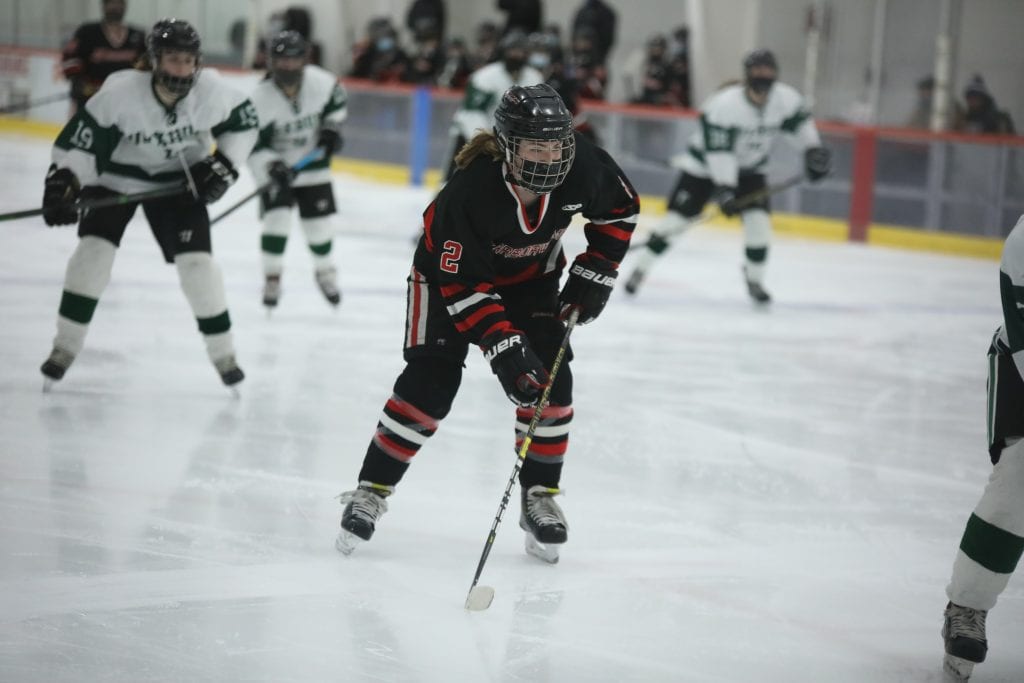 Junior Ryan Maguire trying to get the Harborwomen on the board in the third period. 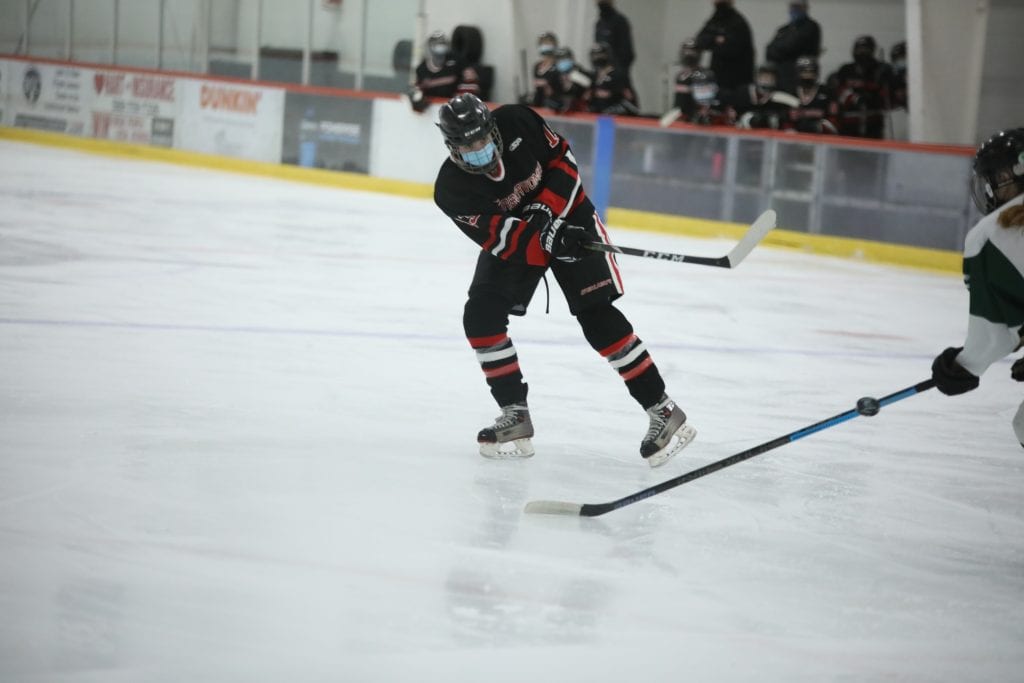 Junior Megan Moynihan gets a shot off in front of the net. 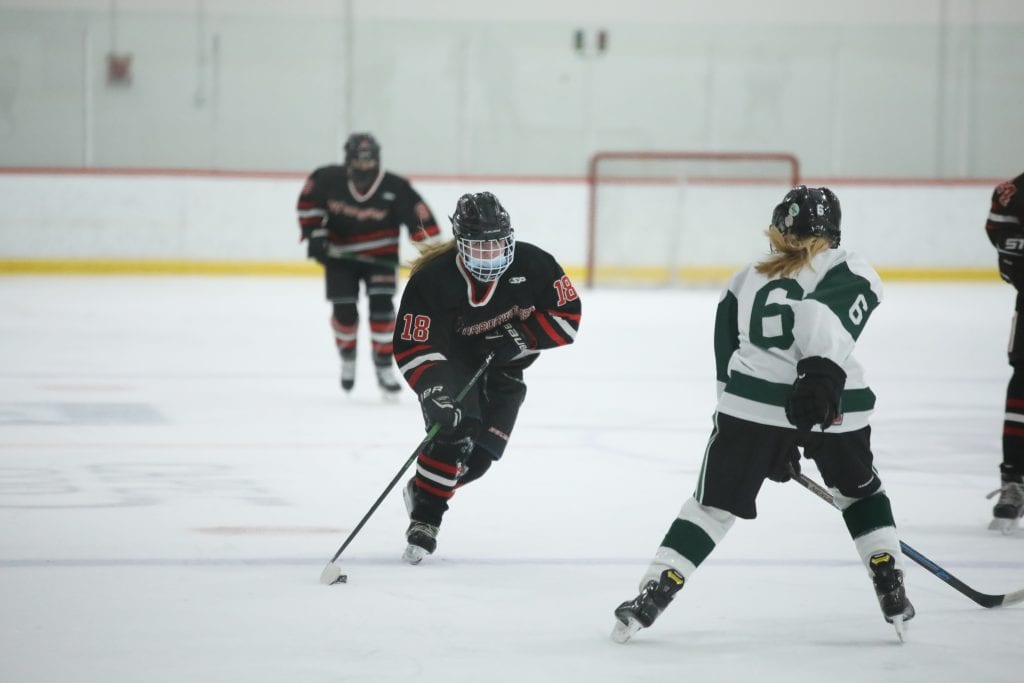 Sophomore Piper Jordan brings the puck over the blue line.