Members of several local churches are among the many Hingham volunteers from various sources who participate in the End Hunger New England program, based in Pembroke.

The End Hunger NE Outreach Program is a non-profit corporation that organizes food packaging events around the country, including at 203 Oak St. in Pembroke.

The mission of the organization is "to feed more hungry New Englanders every year," which has been accomplished for a decade. Last year alone, the group provided nutritious food to feed four million people through local food pantries, homeless shelters, and other programs that pick up the boxed food for distribution.

"Hingham and Boston -- which is a much larger area -- are by far the most active communities with a high volunteer rate," Executive Director Matthew Martin told the Hingham Anchor. "Hingham groups also make large donations to pay for the food."

Volunteers, who work in teams, package meals at the Pembroke warehouse, with social distancing in place on the 10 assembly lines.

Food insecurity relates to being without reliable access to an adequate quantity of affordable, nutritious food.

"As the holiday season approaches, those in need are often forced to choose between heating and eating, a choice no person should have to make," Martin said.

While there has been an increase in the need for food, especially during the pandemic, there has also been an uptick in the number of volunteers signing on to help from various communities, including Hingham.

"Even before COVID-19, the cost of living in New England was higher than many other places," Martin said. "The pandemic exacerbated the problem in addition to the already-expensive housing market. Many people found themselves in the midst of a huge crisis."

He went on to emphasize that children, the elderly, and veterans who may already have been struggling and "who should have a [decent] place to live and nutritious food to eat are struggling even more now."

Once a specific group or organization raises enough money for a packing event, the food is ordered, and plans put into place. The amount of funds raised by each team determines how many meals that group will pack at the warehouse on a specific day.

If an individual wishes to volunteer who is not part of a group, he or she can sign up for an "open" shift, which is funded by donors all over New England. 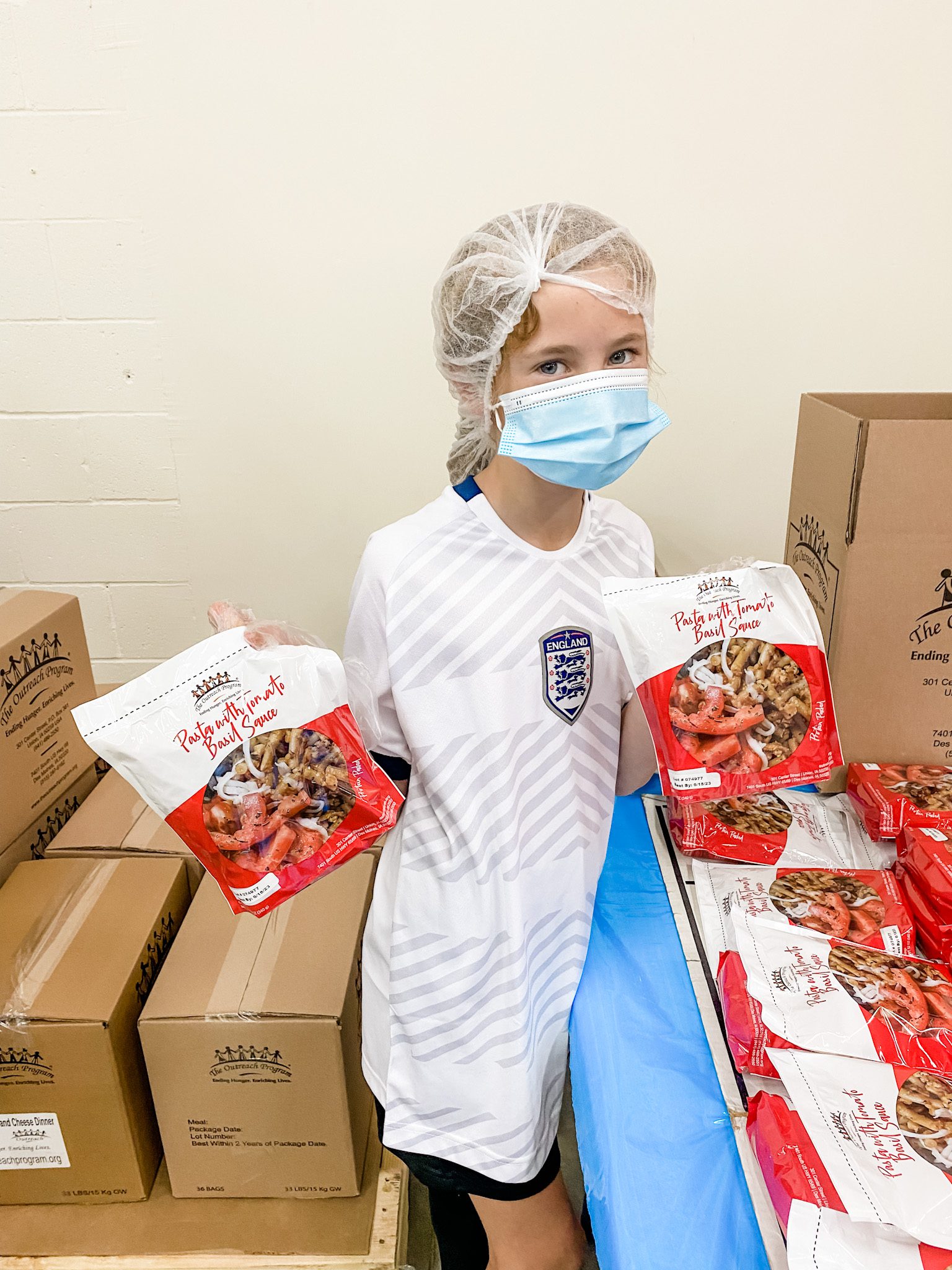 "As a community we did a poll several years ago, and many wanted ending hunger and food insecurity for kids, adults, and families to be high on our collective priority list," she said.

In addition to collecting food year-round for area pantries, including the ones in Hingham, Scituate, Duxbury, and Weymouth, Congregation Sha'aray Shalom annually raises several thousand dollars to benefit the End Hunger NE Outreach Program. "We will return in May 2022 to package 10, 000 meals," Gall said. "We also support MAZON, a Jewish organization that advocates politically to support SNAP and food programs for veterans."

Members of Congregation Sha'aray Shalom participate for a number of reasons. Topping the list is feeling "so fortunate, so grateful to never go to bed hungry. Even on Yom Kippur we fast for about 24 hours from sunset to sunset and then we eat! " Gall said. "Children cannot learn in school if they are hungry, and the elderly should never have to choose between eating healthy food or taking medications they need."

Associate Director of Human Resources Michelle Maloof said The CM Group is committed to positively impacting the lives of others. "We are continuously looking for ways to give back and to 'pay it forward,'" she said. 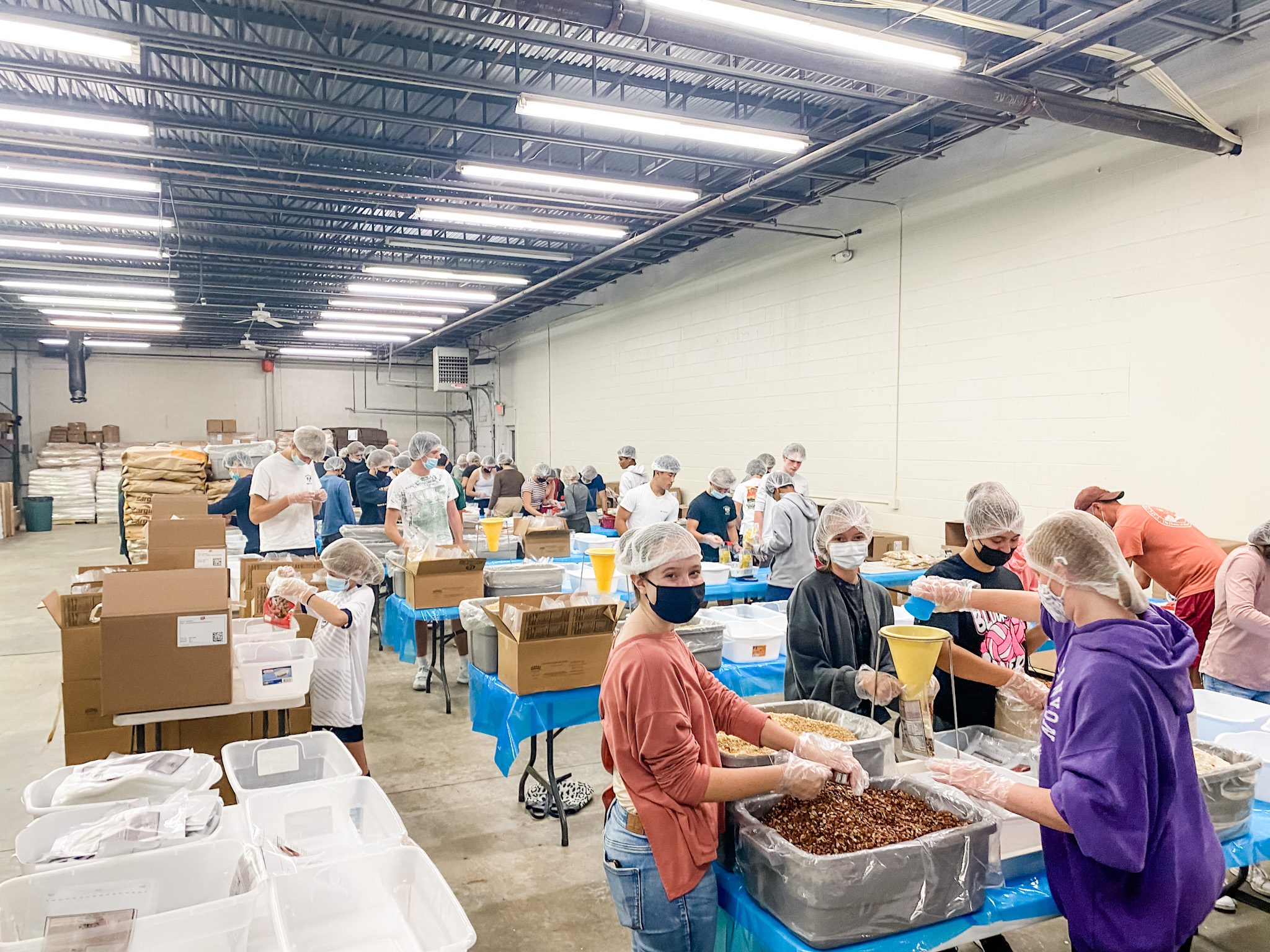 "Led by their impassioned leader Matthew Martin, this incredible non-profit organization brings awareness to, and support for, the staggering hunger pandemic that people are facing in our own backyard."

Employees of The CM Group have felt fortunate to come together on multiple occasions for company-sponsored meal packing events. "It's always great fun (with some friendly competition) for a great cause!" Maloof said.

Hingham resident Mike Devlin has hosted four End Hunger packing events involving his family, friends, co-workers, participants from Hingham Little League and the Babe Ruth League, and others -- including on one occasion, to celebrate his birthday.

That night, his volunteer team packed 33,300 meals. Devlin and his wife, Catherine, contributed $10,000 to provide the food for these events, and others donated above and beyond that amount. Some of those funds will support a Veterans Day afternoon packaging event.

"We're trying to show that people can give back and have fun at the same time," Devlin said. "My kids and their friends chat while packing the food, and contributing in this way makes them feel good about themselves. The time just flies by."

What really helped raise awareness about the severity of the need was the thank you he sent to volunteers noting that within 24 hours, local food pantries and other groups -- including in Hingham -- expressed a need for the food and had picked up all the 33,300 packages.

"We live in a very nice area, but there are still people in need right in our backyards," Devlin said.

He and others involved with End Hunger NE are quick to applaud Martin's Herculean efforts. "Matt is a super star," Devlin said.

The Pembroke food collection/packing warehouse also has a Reiki room -- open to all who are interested by appointment -- and a gallery featuring local artisans, with a portion of the proceeds benefitting End Hunger NE. The gallery features books, photography, artwork, jewelry, handmade greeting cards, and other items. 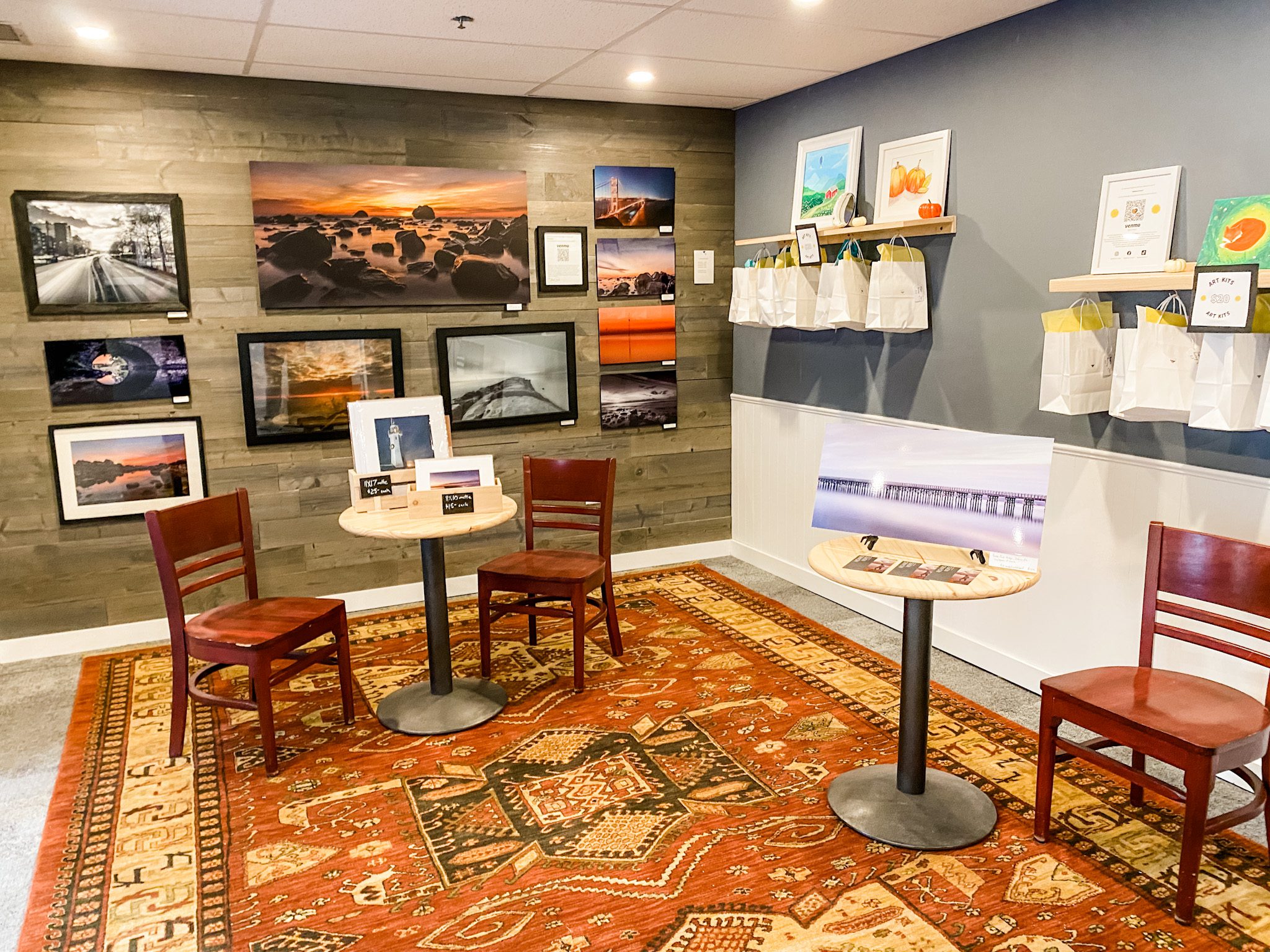 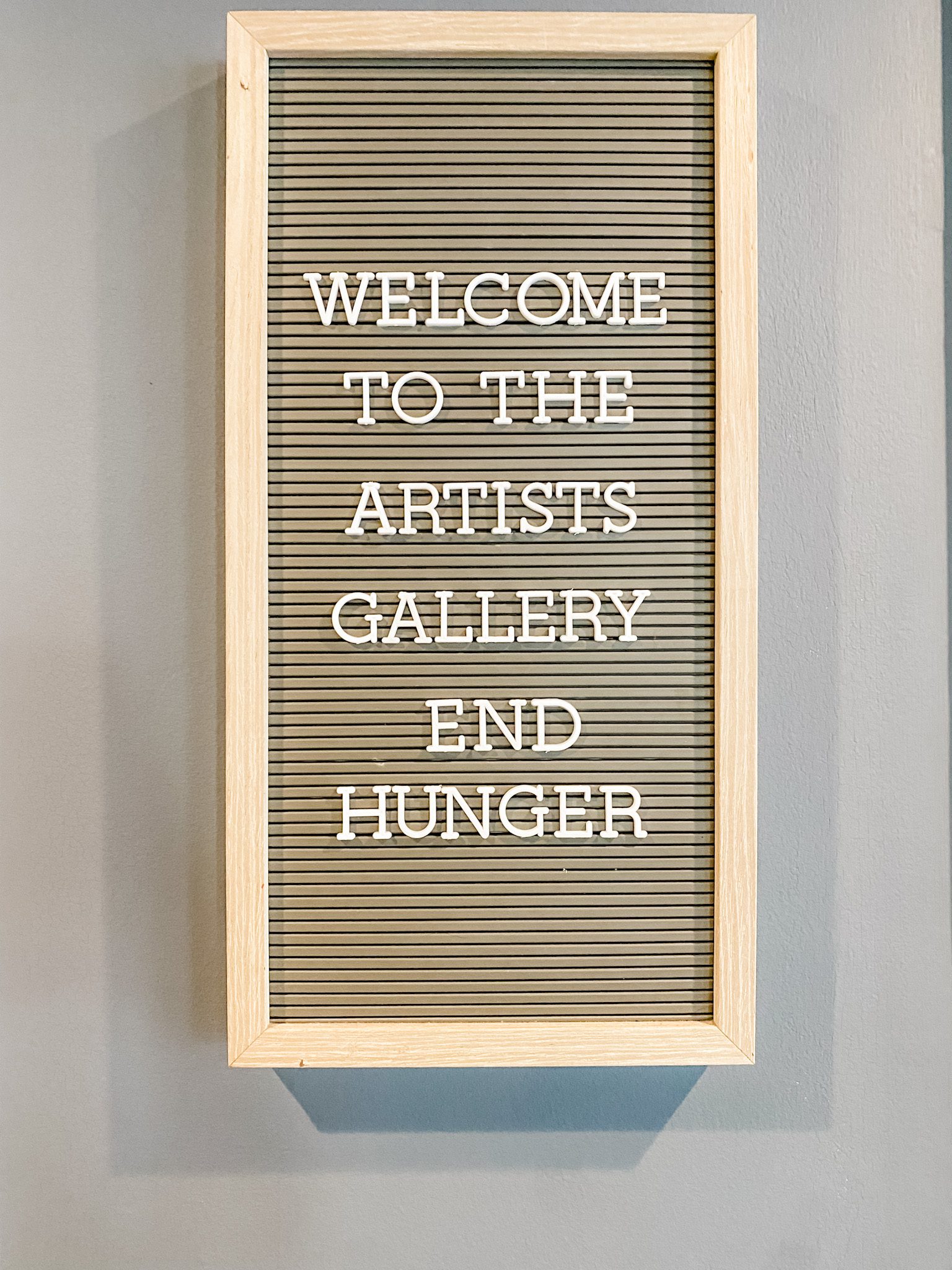 "We're all trying to make a difference," said Heidi Martin, who runs the Reiki room and is an author of a children's book and novel. "Our intent is to provide services and also to give back to those in need." Email [email protected] or call (857) 939-3460 to make an appointment for the Reiki room.

There's an ongoing need for donations to buy the food as well as more volunteers.

There are a number of ways to volunteer and/or make a financial contribution through the EndHungerNE.org website. There are also opportunities for individuals and groups to promote the program through Instagram, Facebook, and other social media outlets.

For further details, to volunteer, to request a food delivery for a local food pantry, shelter, or other organization, or to make a donation, visit EndHungerNE.org or call (857) 939-3459. 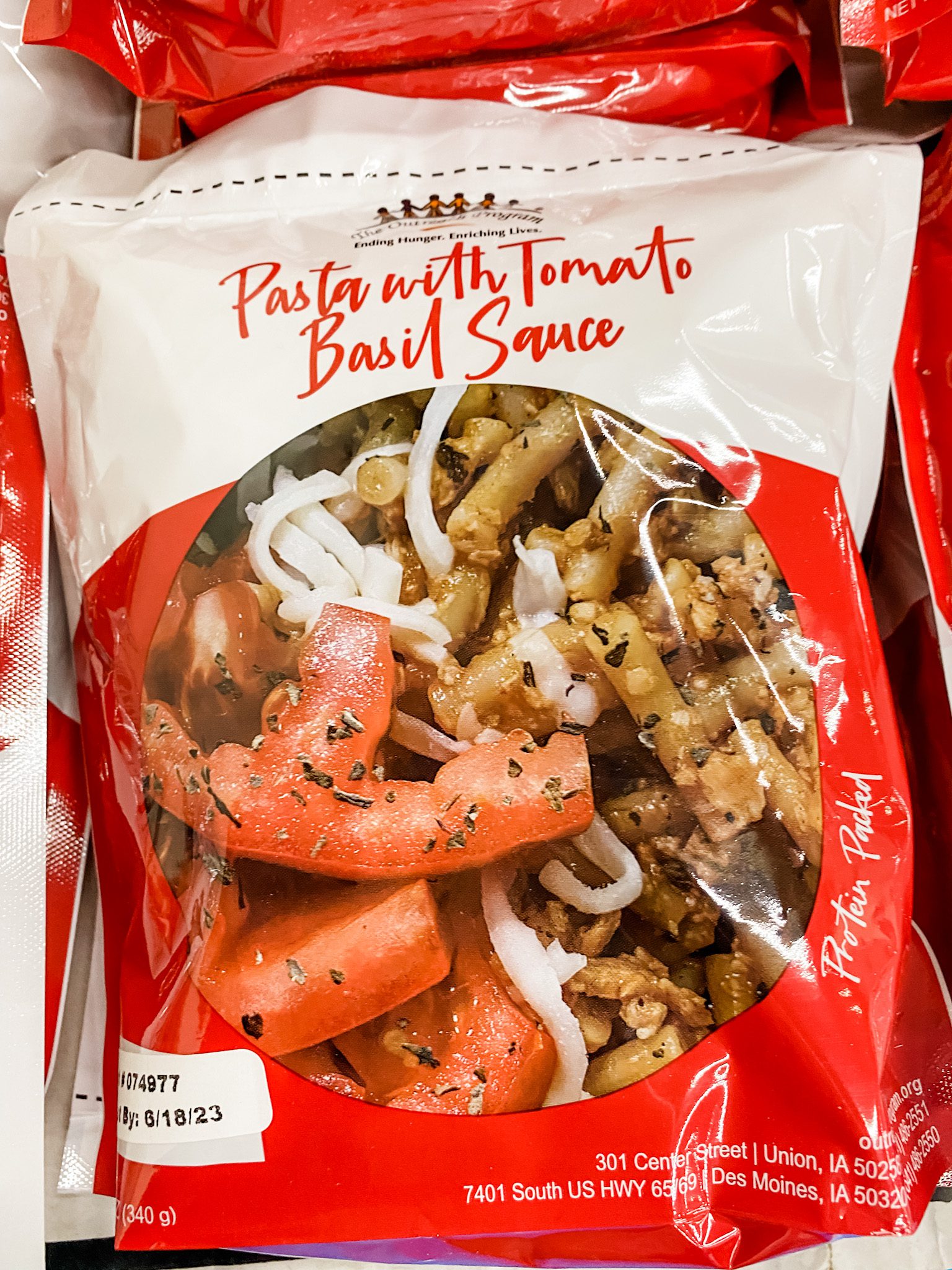 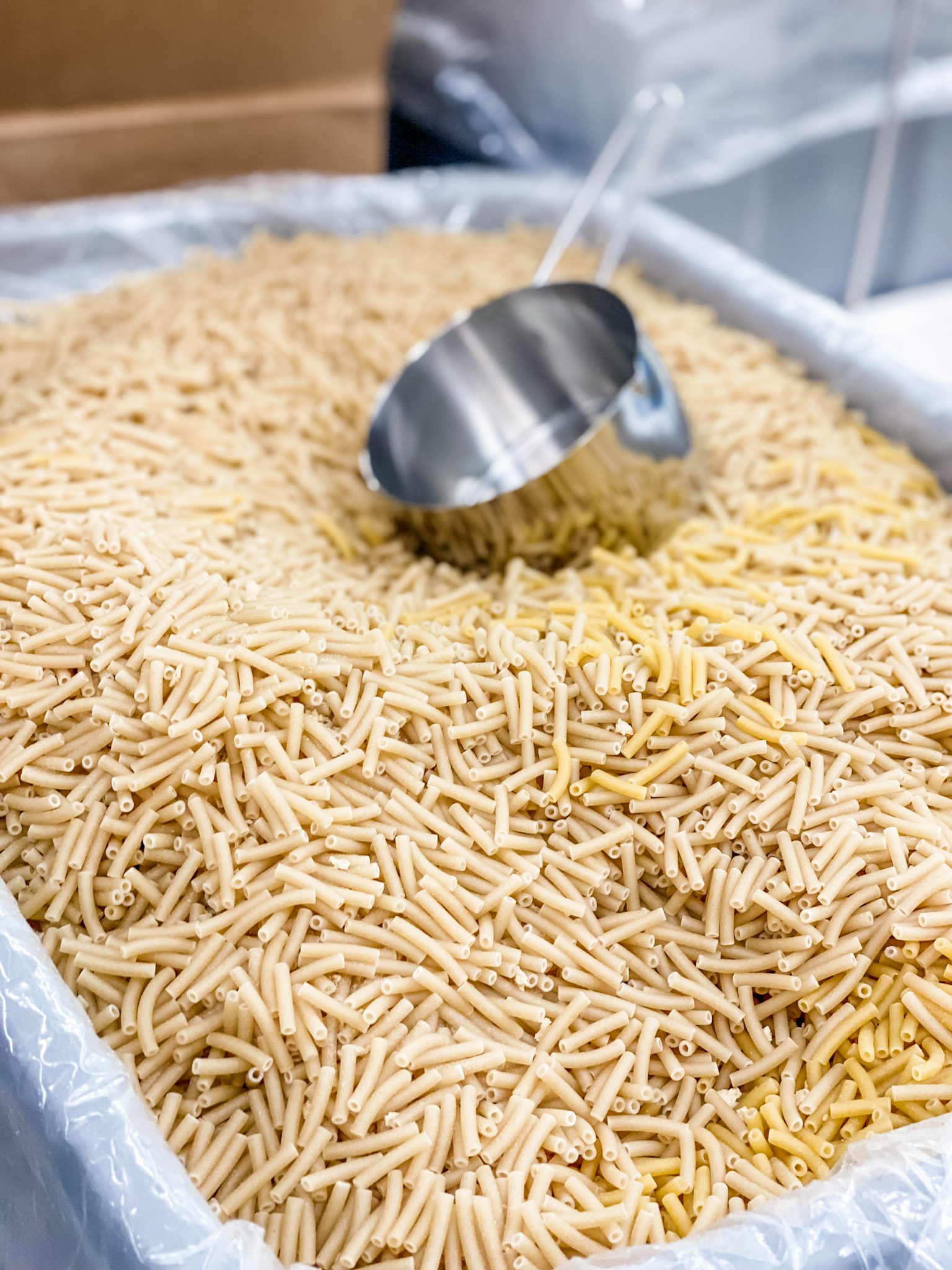 The first event was a huge success. About 400 volunteers packed more than 50,000 meals resulting from $15,000 in donations. "Matthew Martin is a dynamo. He's a ball of energy and a force for good," Roberts said.  St. John's hosted two more MLK events since that time.

The St. John's team will be back packing on Martin Luther King Jr. Day at the warehouse in Pembroke on Jan. 17, 2022.

"Besides the fantastic energy that's palpable in the room when packing meals, the thing I like best about the program is that it's one of the few volunteer activities where every age can participate," Roberts said. "You can see a five-year-old helping an 85-year-old and families packing together and friends, neighbors, and parishioners [working side by side]. The community loves this event and looks forward to it every year, and I'm proud that St. John's plays a role. And I love that a little goes a long way -- it only takes 30 cents to feed one person, which stretches dollars far to maximize feeding as many people as possible."

The St. John's team "can only pack as many meals as we fund," Roberts said.

The donation link is: endhungerne.org/#donate. Those interested in donating specifically to the 2022 Martin Luther King Jr. Day packing event are asked to indicate "MLK Day" in the notes section.

The Rev. Tim Schenck shares Roberts' enthusiasm. "As an interfaith community, we wanted to honor the legacy of Dr. King by embracing his call to service and action. As feeding the poor is a hallmark of the Abrahamic faiths, we decided a community-wide meal-packing event aimed at the hungry on the South Shore was the way to go," he told the Hingham Anchor. "We've hosted the event at St. John's for several years, but the joy is in the intergenerational community connection as people of all faith traditions -- and none -- join us.

Throughout the day, after each shift change, we read Dr. King's own words as a reminder of our greater purpose in coming together."

Schenck praised Martin, who is also a member of the Hingham-Hull Religious Leaders Association, for his amazing efforts. "He does an incredible job organizing these events. He speaks eloquently about the need out there, which the pandemic has only increased; is passionate about feeding the hungry; and is a great cheerleader throughout the day," Schenck said. "Chrissy Roberts has served as our on-site coordinator (it takes MANY volunteers to organize and pack meals) in her capacity as Outreach Chair at St. John's, and she has ably guided this large-scale operation to great success."