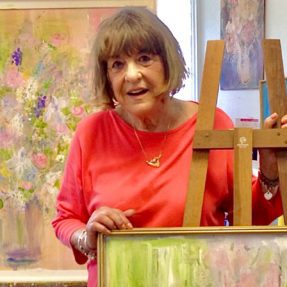 Dorothy Rose (Papani) Palmer, of Hingham and Nantucket Island,  93, internationally acclaimed artist known for her vibrant paintings, notably her colorful floral compositions, passed away after a short illness, on July 22, 2021.

Everyone admired Dorothy‘s intuitive spirituality, her love of entertaining, and boundless energy. Dorothy was compassionate, empathetic and loved her community. Palmer, daughter of Nicholas and Rose (Puopolo) Papani, was born and raised in Quincy and was a graduate of Thayer Academy and Lasell College. Dorothy later studied at the Art Institute of Boston with noted artist MacIvor Reddie and also attended Harvard Divinity School.

In 1952 she married Robert Louis Palmer, a graduate of the US Coast Guard Academy, and later a lieutenant in active service for the Coast Guard. At that time Dorothy was a fashion model and accomplished fashion designer in both Toledo and Cleveland, while Bob was stationed on Lake Erie.

In the late 50s Dorothy and Bob moved back to Massachusetts where Dorothy continued to pursue her creative talents. She was a founding member of the South Shore Art Center in Cohasset and the South Shore Conservatory of Music in Hingham. Dorothy established galleries in the Hingham Granary Marketplace and Sugarbush Village, Vermont, which showcased her original artwork.

Mrs. Palmer loved golf and was a lifetime member of Cohasset Golf Club and Sankaty Head Golf Club on Nantucket. She was also a member of the Neighborhood Club of Quincy and Hingham Yacht Club and a board member of the Salvation Army. Her art has appeared internationally including at the American Painters in Paris Exhibition, the Smithsonian and the White House.

She is survived by her two sons Nicholas (wife Dorothy) of Charleston, SC and Robert  (wife Nancy) of Boston; sisters Phyllis Godwin of Hingham and Virginia Roth of Warren, VT; and six grandchildren: Nicholas, Daniel, Alexander, Oliver, Lilianna and Juliette. A private service will be held by the family. A larger gathering to celebrate Dorothy‘s life will be held at a later date when conditions permit.

In lieu of flowers contributions can be made to the Dorothy Palmer Fund of the South Shore Conservatory of Music, One Conservatory Drive, Hingham, MA 02043