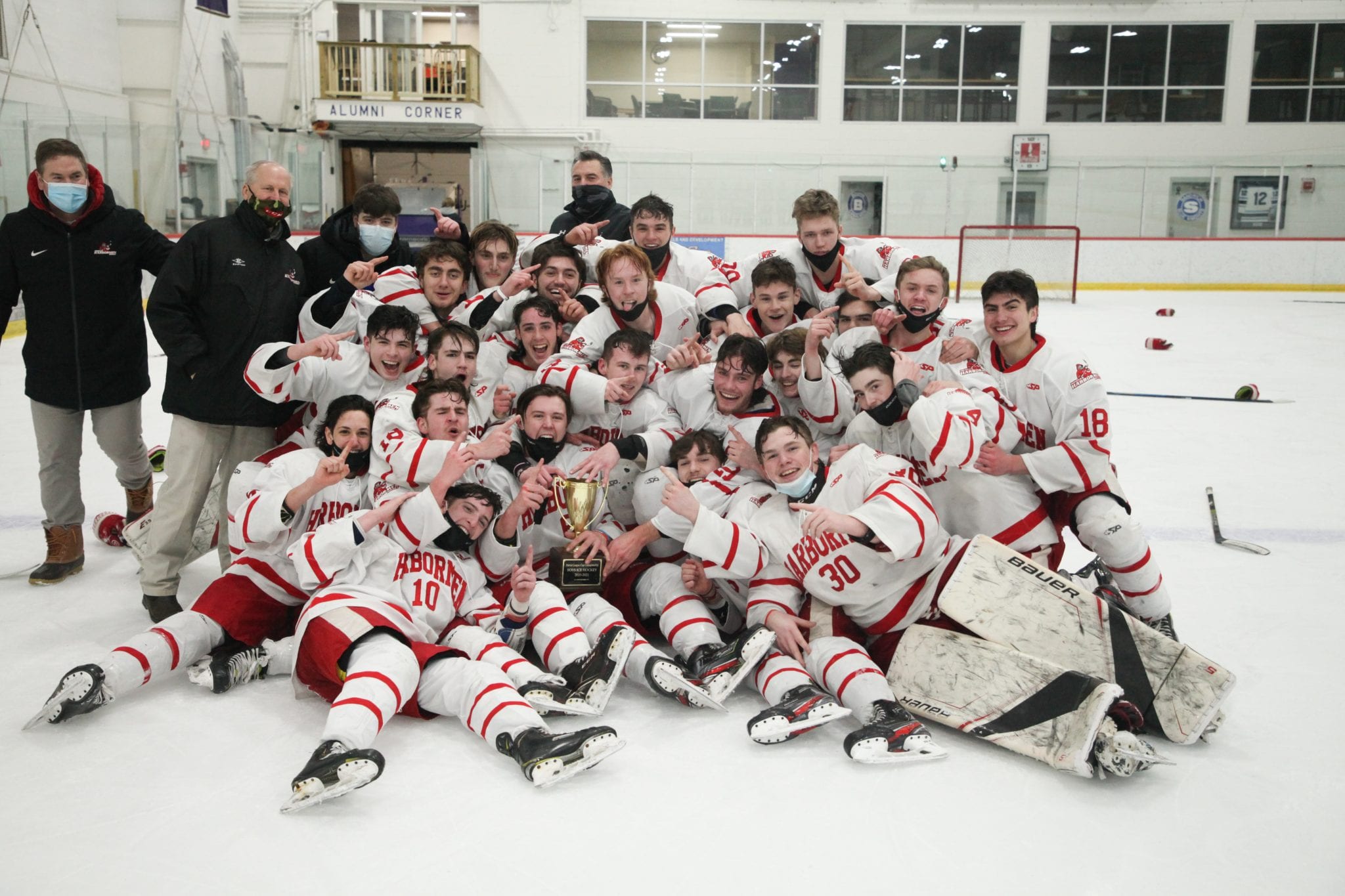 Hingham and Marshfield met in the final game of the boys hockey Patriot Cup in Bourne, Massachusetts on Friday night. Due to the lack of a State Playoffs and the Super 8 Tournament, this was the last game of the season for both schools and was highly anticipated due to the physical style of play from both teams.  And the game did not disappoint.

With big bodies on both ends of the ice, the game was fast paced and as high level as the regular state championships. The first quarter ended with just one goal, but each team left their mark on the ice. Hingham took possession early, winning faceoffs in the offensive zone thanks to junior forward Wyatt Iaria. However, Hanover struck back with breakaway opportunities but was unable to convert anything against brick wall Theo Jacobs. Hingham struck first 11 minutes into the first period, converting on a Bobby Falvey wrist shot from the blue line that opened up after a turnover by Ram Collin Doyle.

The second period decided the game in Hinghams favor despite being scoreless. After a penalty in the defensive end and an interference call on a shorthanded breakaway, Marshfield had a 5 on 3 situation for over one minute with over 3 total minutes on a power play. In response, Hingham goaltender Theo Jacobs stepped up for his team, making 15 saves and keeping the momentum on Hingham’s side.

To close out the game, Hingham found themselves on the power play after a check to the head 8 minutes into the final period. After plenty of good opportunities and equally great saves by Marshfield goalie Aiden Healey, sophomore Chase McKenna found himself with the puck on the blue line. He slung a shot on net and it got past Healey, securing the game for Hingham at 2-0. “I was at the top of the power play,” McKenna reflected, “I just saw the opening, took a good shot and I got a lucky bounce in.” Hingham put the final nail in Marshfield's coffin after an empty netter from senior Lars Osterberg and with that Hingham won the Patriot Cup, topping Marshfield 3-0.

Captain Paul Forbes, who hoisted his second Patriot League Championship Cup (soocer) of these season last night, mentioned the bond that the team had after the game. “We had a really nice bond with this team, a lot of camaraderie….brothers for life.  There's nothing that compares to a hockey championship," the senior adds.  Forbes with be going for the trifecta in the spring as captain of the lacrosse team.

The defenseman McKenna also spoke about his experience on the winning team, mentioning that, “This is a great group of guys, a great team,” and the game was a, “a great win,” that “[felt] wonderful.”

Coach Tony Messina expanded on the championship atmosphere his team felt during his win. Despite the Patriot Cup being the replacement for the State Championships, Messina was confident in the level of play, “[we were] playing for a championship, it doesn’t matter what level.” During his pre game talk, Messina urged his players to “put everything out on the ice and leave it out there.” Hingham describes itself as a team that works for every win, which was especially relevant considering their early loss to Hanover in the tournament. However, Hingham “stayed with what we do best, it’s always a grind,” and “won that game [like] the way we won all year long, just grinding it out,” as per Messina.

Messina went on to talk about the toughness of his players, McKenna (who was injured in the first period of the semis) and junior Drew Carleton, in particular.

"Just amazing.  We weren't even sure they were going to be able to play," he says.  "Not only did Drew get in hit practice with a shot, played in the game the other night and today said he was even more sore.  So he plays tonight and now he has a huge gash on his arm that's going to require stitches. And Chase (McKenna) coulnd't even raise his shoulder.  For him to score his [second] goal of the year is pretty good."

Congratulations to the Hingham boys on their win and end of the season! Click here for the taped game. 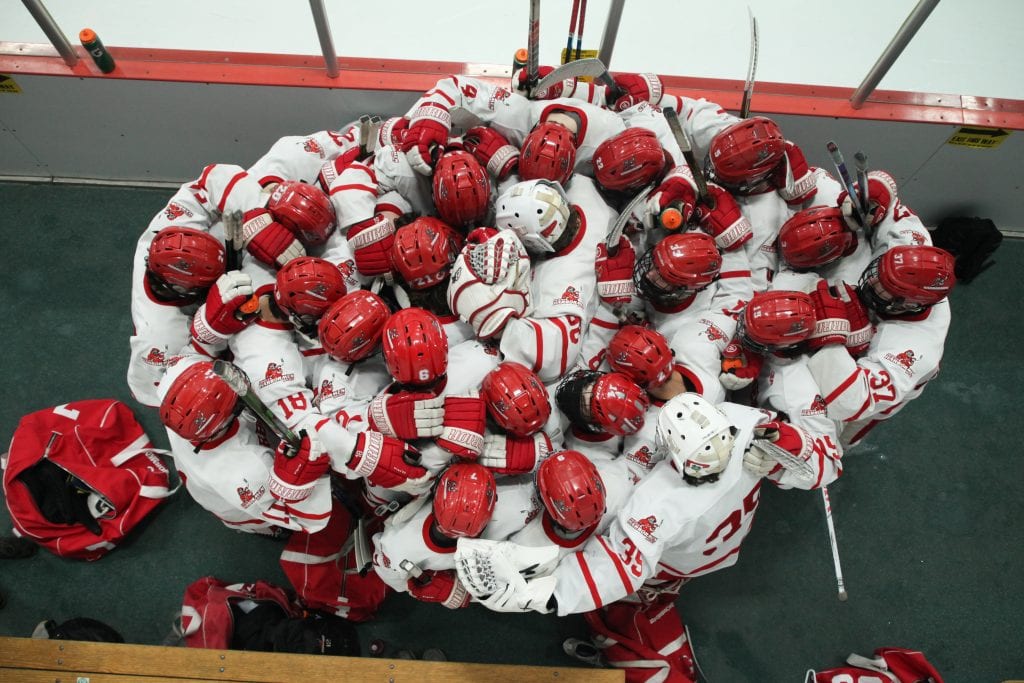 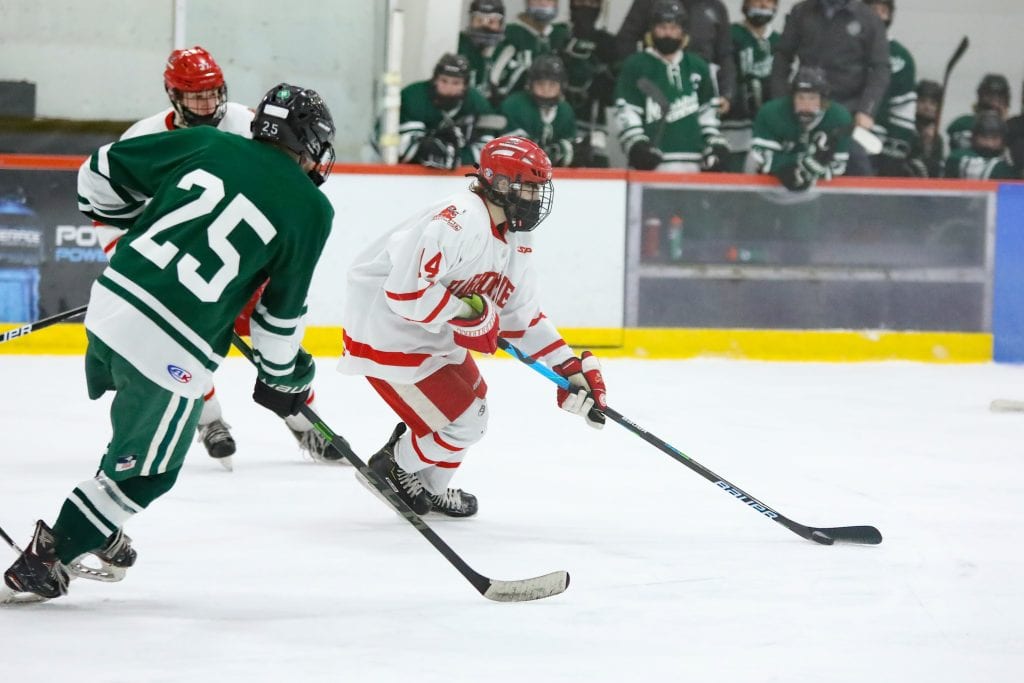 Sophomore BIlly Jacobus looks for the open man in the first period. 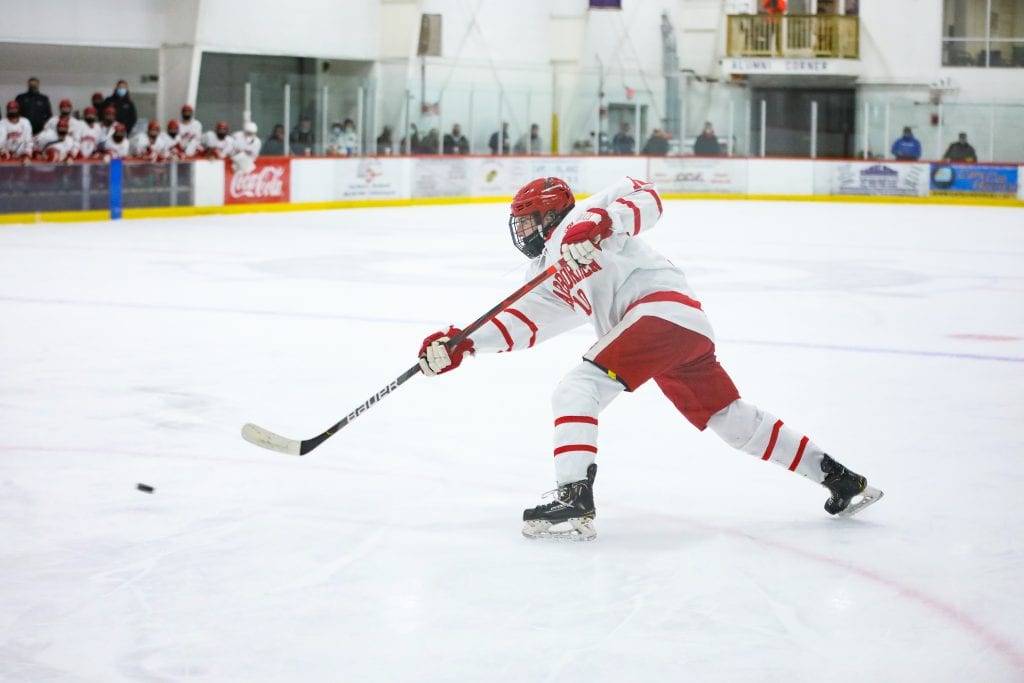 Junior Drew Carleton fires one from the top of the circle. 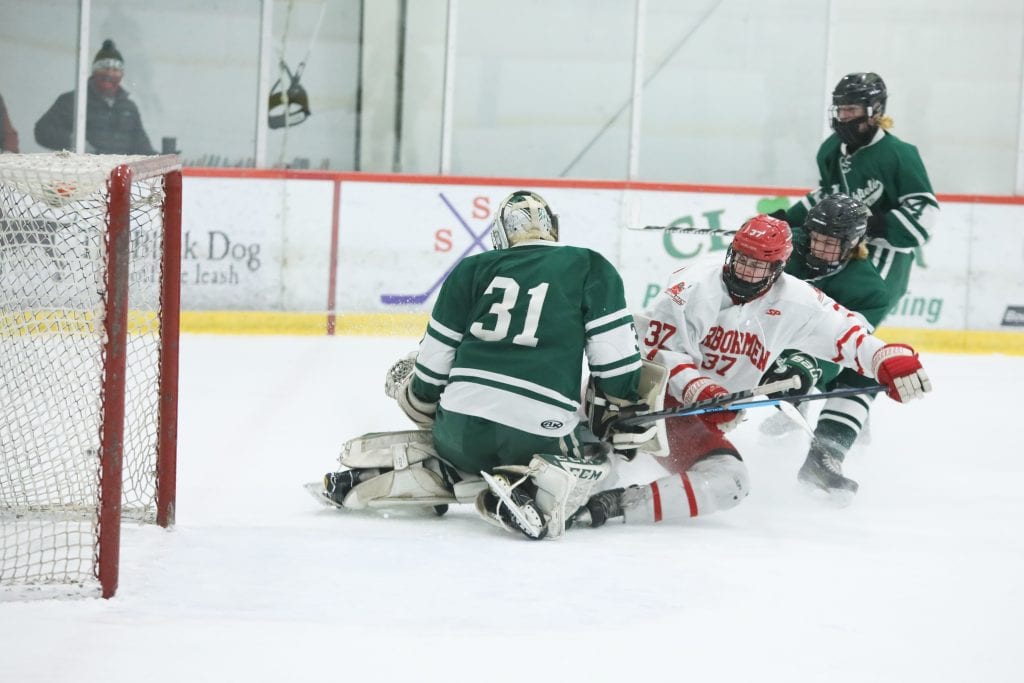 Sophomore Aidan Brazel gets pushed into the goalie in the first period. 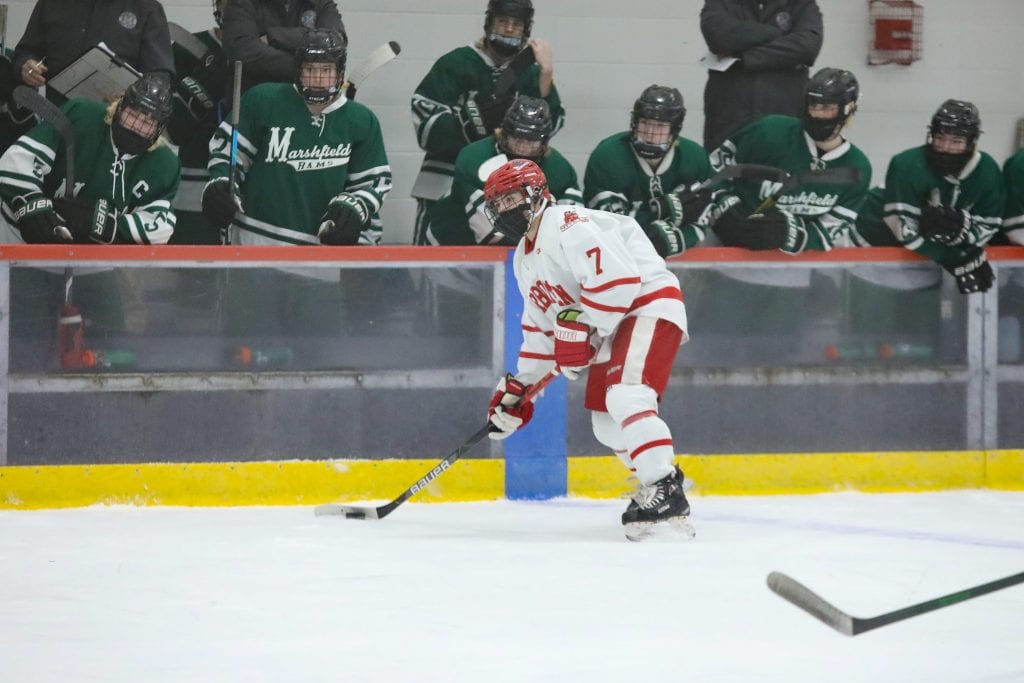 Sophomore Chase McKenna back in action after leaving the semifinal game early with an injury. 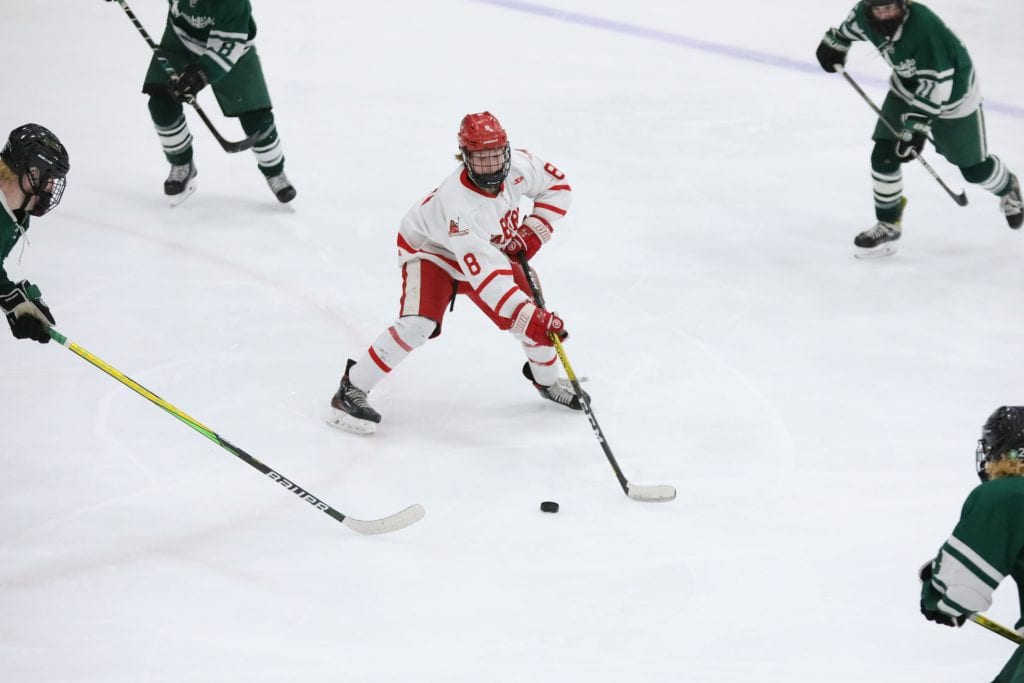 Junior Conor Walsh gets a shot off as the defense collaspes on him. 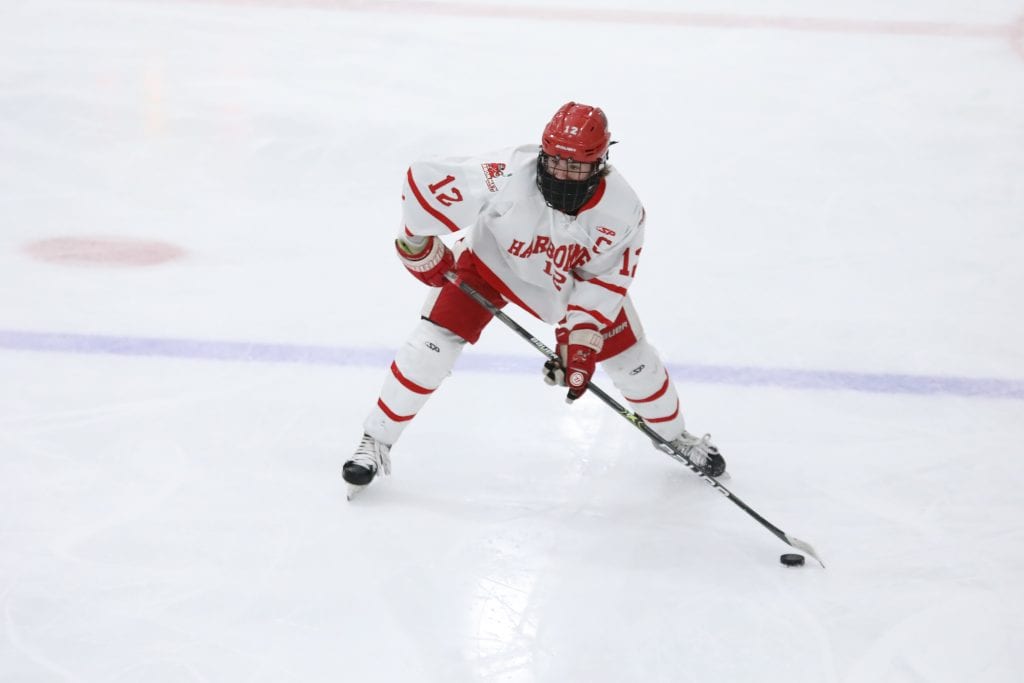 Senior captain Tommy McNally surveying the ice before he shoots. 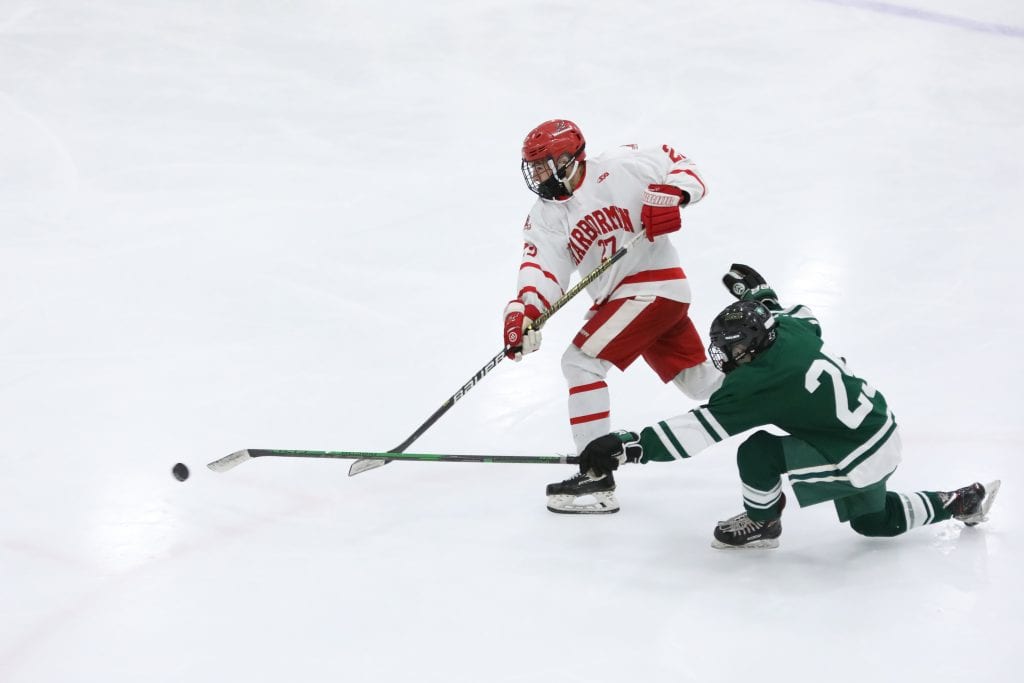 Sophomore Ace Concannon gets around a Marshfield defender. 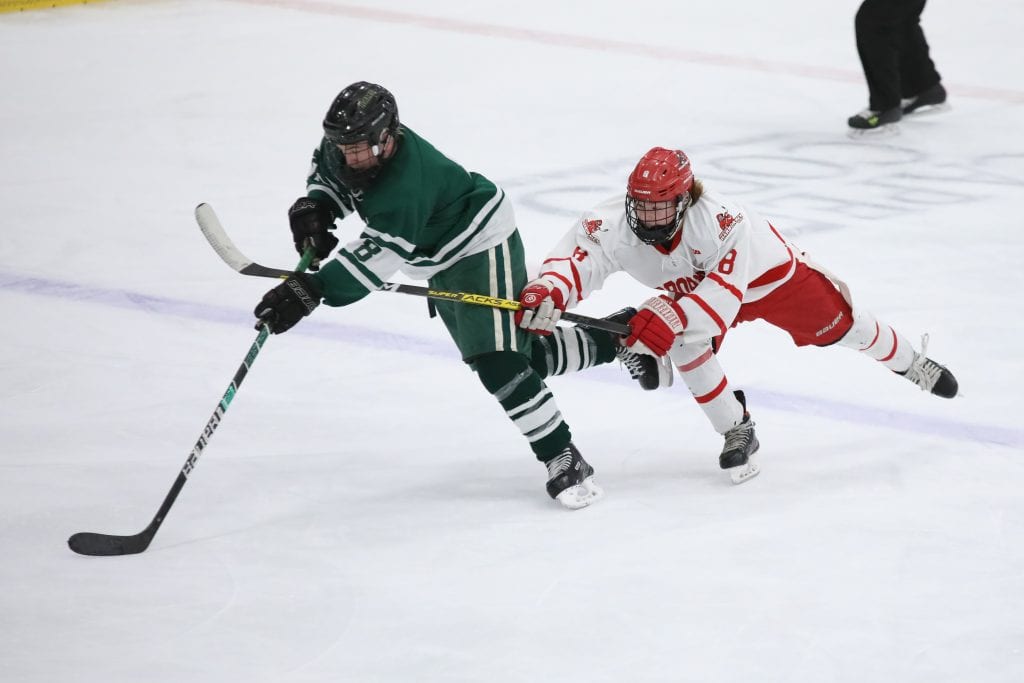 Junior Conor Walsh with one of his many timely backchecks in the game. 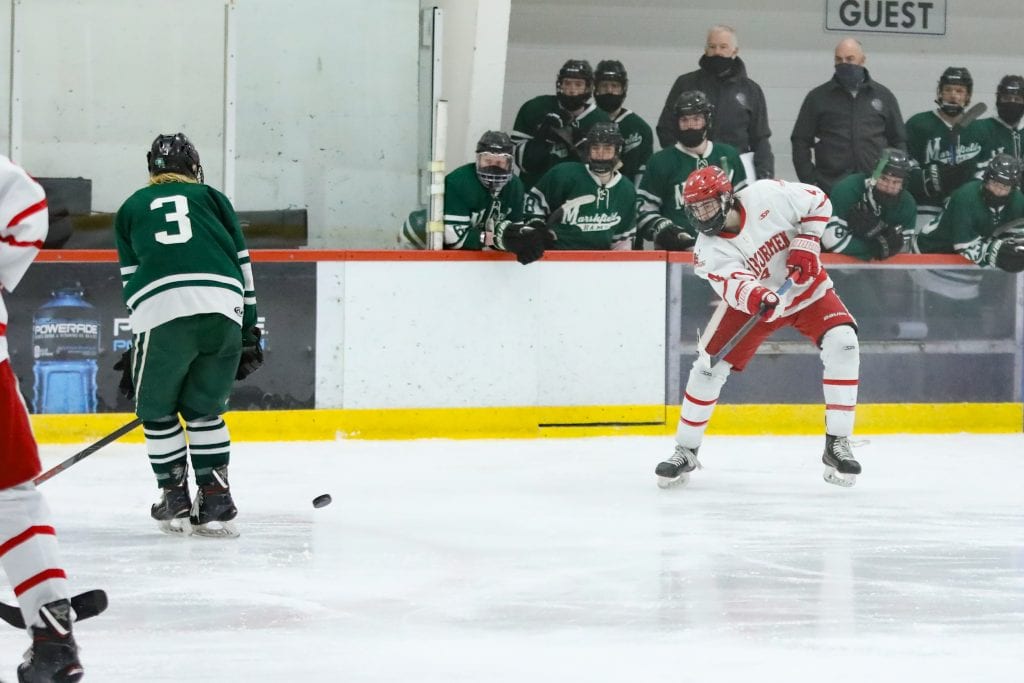 Junior Bobby Falvey continued his scoring streak by netting the first goal of the game. So 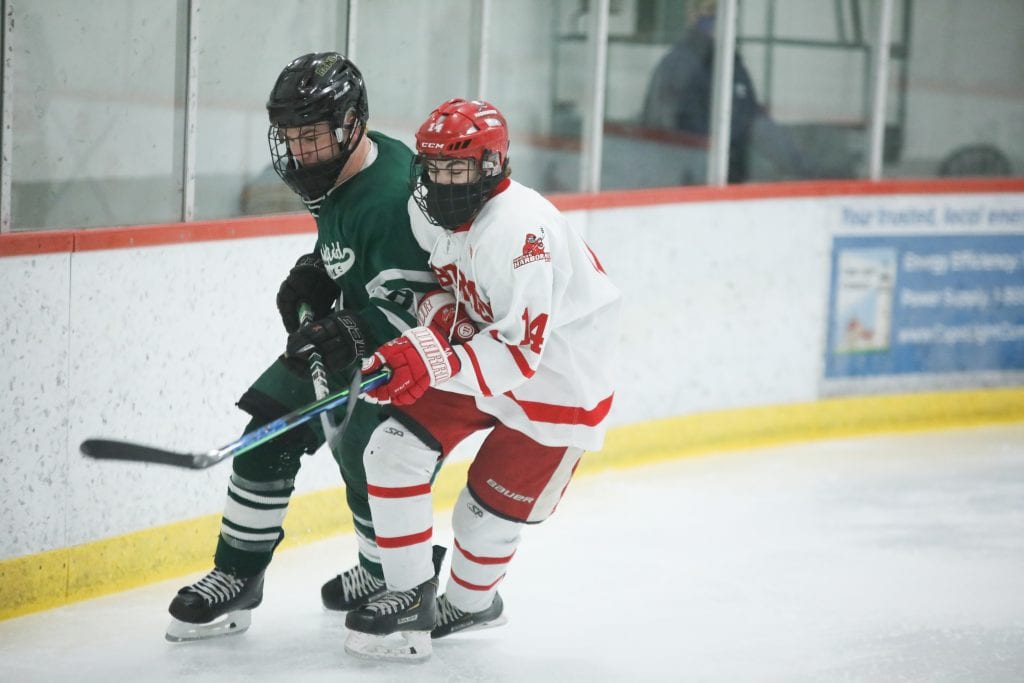 Sophomore Billy Jacobus battles along the boards in the third period. 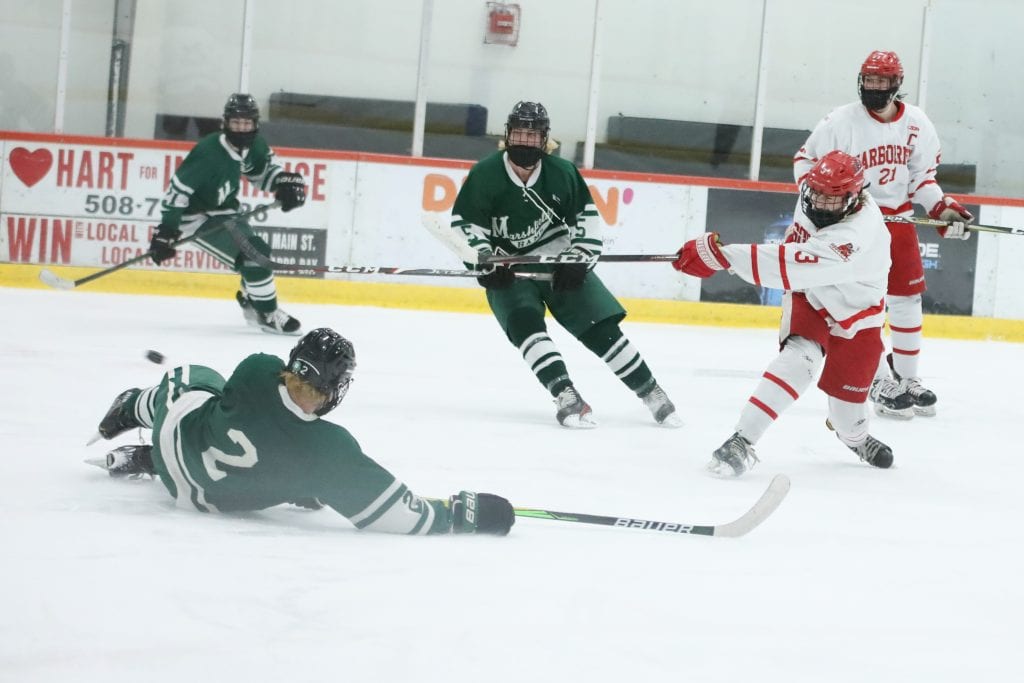 Senior Lars Osterberg shoots it over the sliding defensemen. 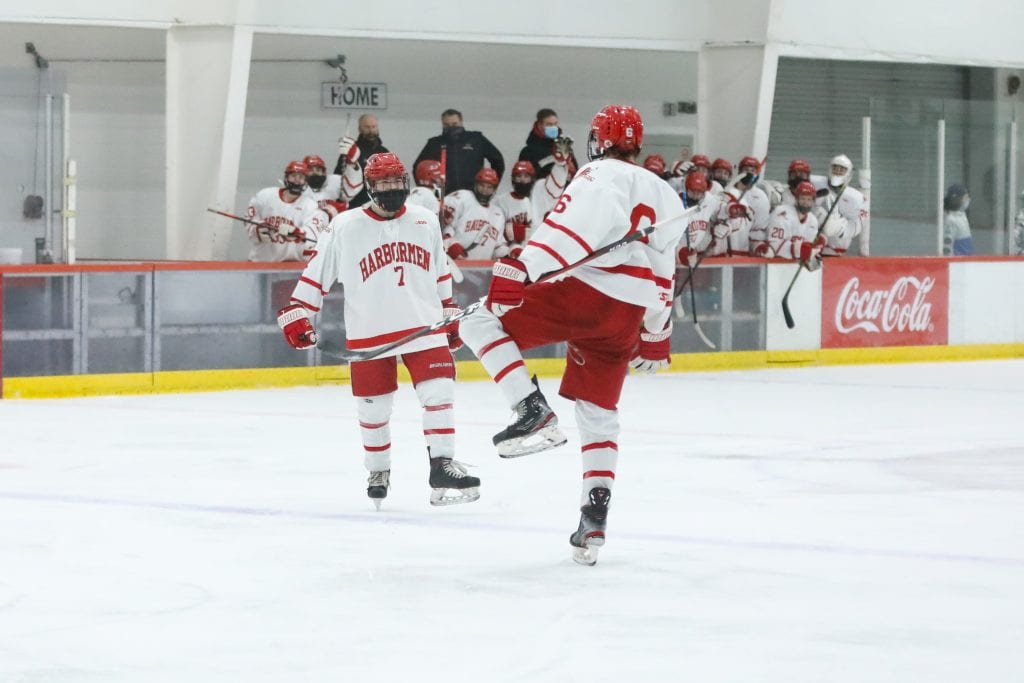 Even with a bum shoulder, Sophomore Chase McKenna buries his second goal of the year. 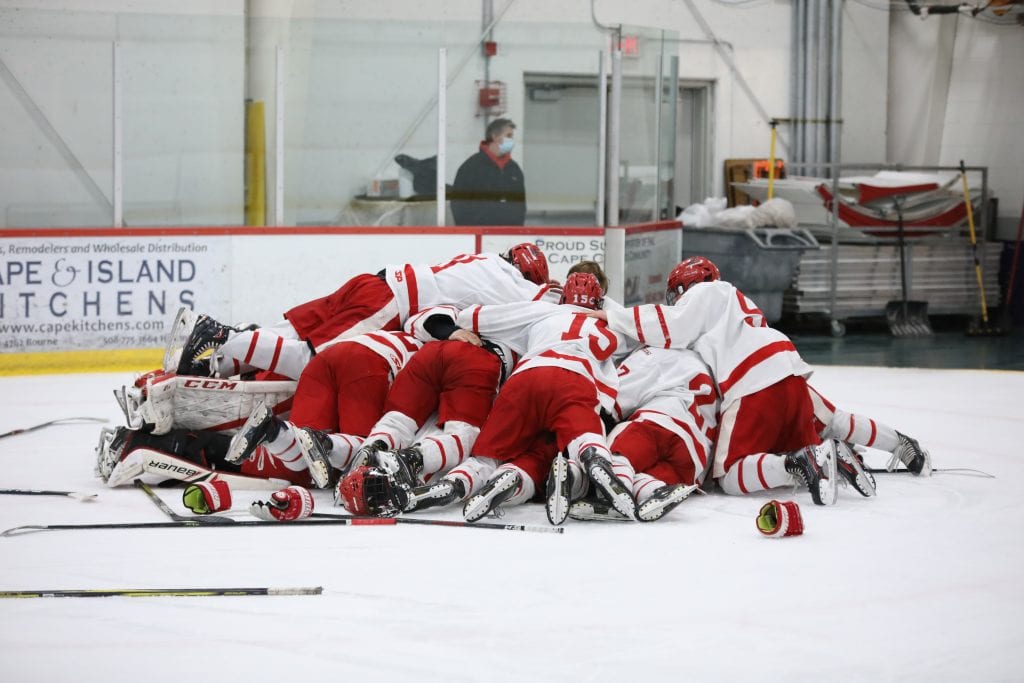 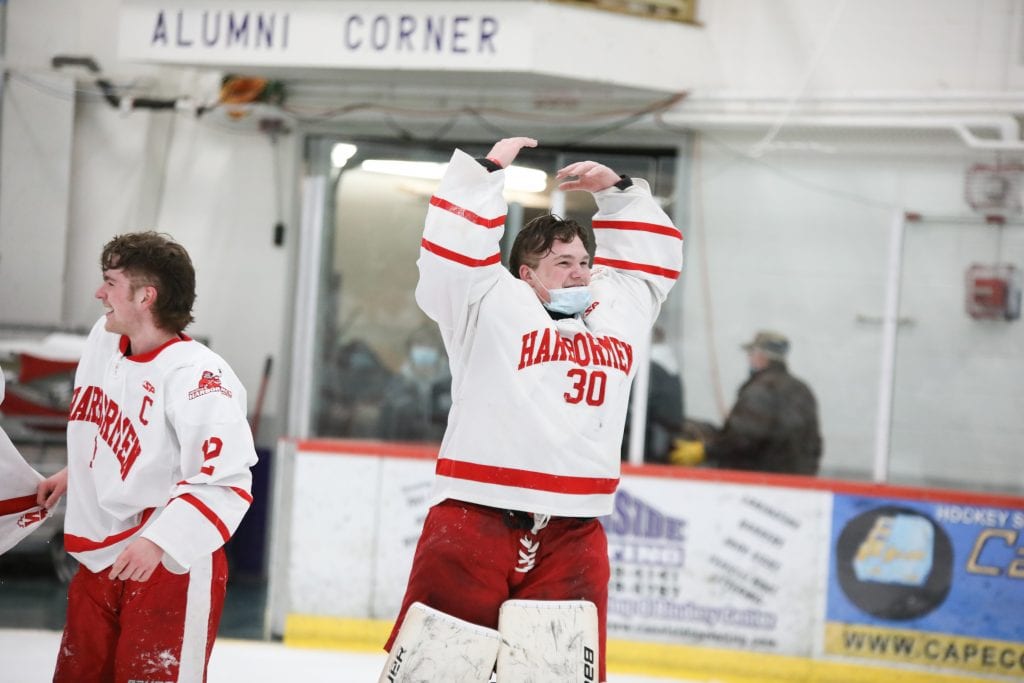 Senior Theo Jacobs acknowledging the families in the stands. 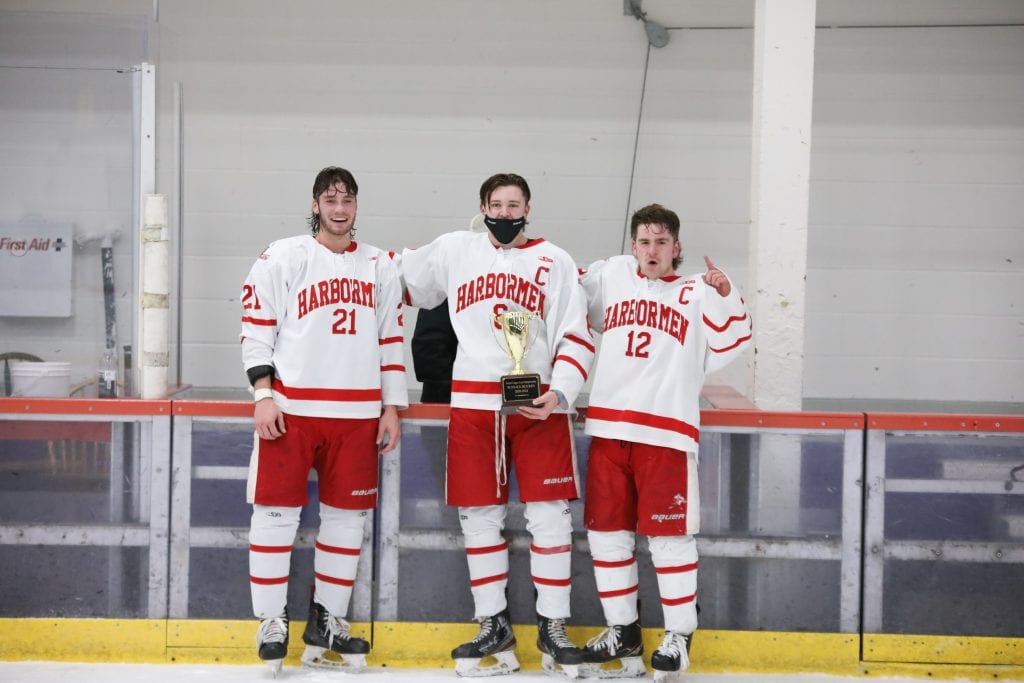 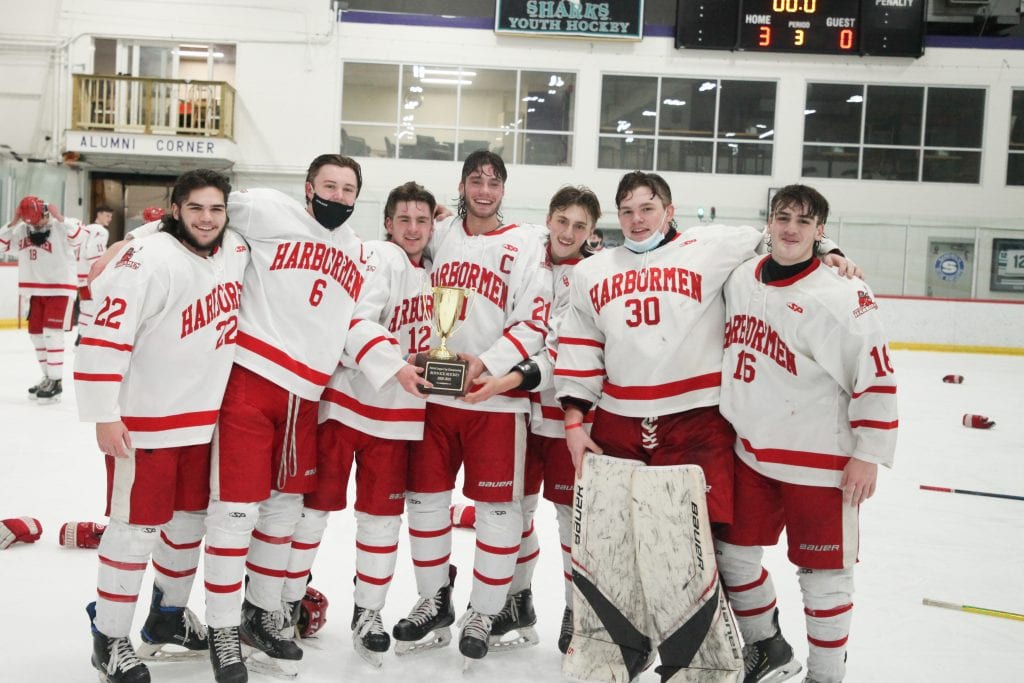 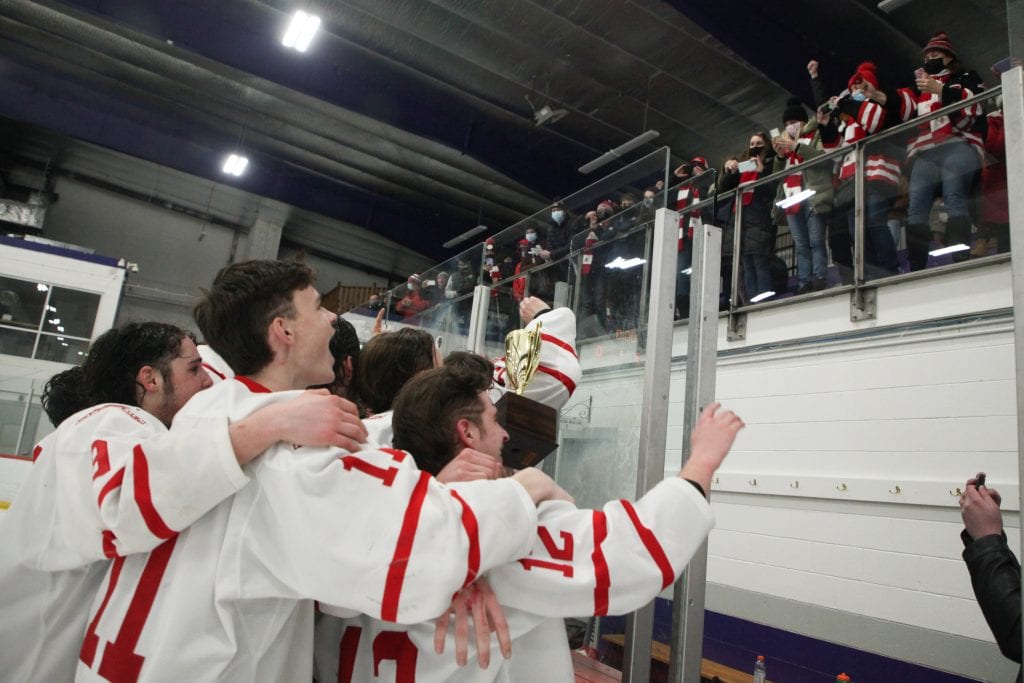 Thanks to all the parents for making the stormy trip to the Cape.