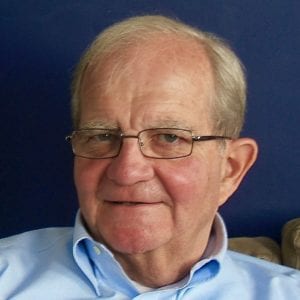 Blasdel A. Reardon, age 85, of Cohasset, MA, originally of Cincinnati, OH, passed away at home on May 30, 2021. The cause was leukemia, which he faced with courage and grace. Blase is survived by his loving wife, Anne; three siblings (Andrew, Mary Gaines Standish, and Frances Romweber); his five sons (Blase Jr., Sean, Christopher, Kevin, and Timothy); Anne’s three children (Sarah Markert, Nancy Michalowski, and David Elwell); and their combined 16 grandchildren. He was preceded in death by his first wife, Jean Marie Ellenburg; his brother Bill; and his nephew Nicholas.

One of Blase’s gifts was his ability to make and sustain friendships over many decades. Another was his knack for connecting with strangers. His extraordinary people skills kindled an ever-widening circle of close friends.

Blase was active in his church and community and sang with gusto in the Apollo Club in Boston and the St. Paul Parish Choir in Hingham. In the summer, he enjoyed sailing with friends. In the winter, he loved taking his grandchildren skiing in New England and spending time with friends in Naples, FL.

Over the last 20 years, Blase served as a mediator in the New England construction industry, helping people resolve their disputes amicably. Mediation, he liked to say, was his third career. In the 1960s, he introduced computer technology at Armco Steel. Later, he led two construction firms: Reardon Industries in Cincinnati and A.F. Underhill in Boston.

Blase grew up in Cincinnati, the second of five children born to William J. Reardon and Frances Blasdel. He graduated from Portsmouth Abbey (’54), Notre Dame (’58), and Carnegie Mellon (’60). He later earned a certificate from Harvard Law School’s Program on Negotiation (’00).

His family wishes to thank the health workers and caregivers who supported him over the past two years, especially those at Massachusetts General Hospital and Old Colony Hospice.

Visitation at Pyne Keohane Funeral Home, 21 Emerald St., Hingham, MA, on Wednesday, June 2, from 4–7 PM. Funeral Mass at St. Paul Parish, 147 North St., Hingham, on Thursday, June 3, at 11 AM. The Mass will also be live streamed through the link above. Donations in Blase’s memory may be made to Old Colony Hospice in West Bridgewater, MA or Wellspring Multi-Service Centers in Hull, MA.

1 thought on “Blasdel A. Reardon Obituary”