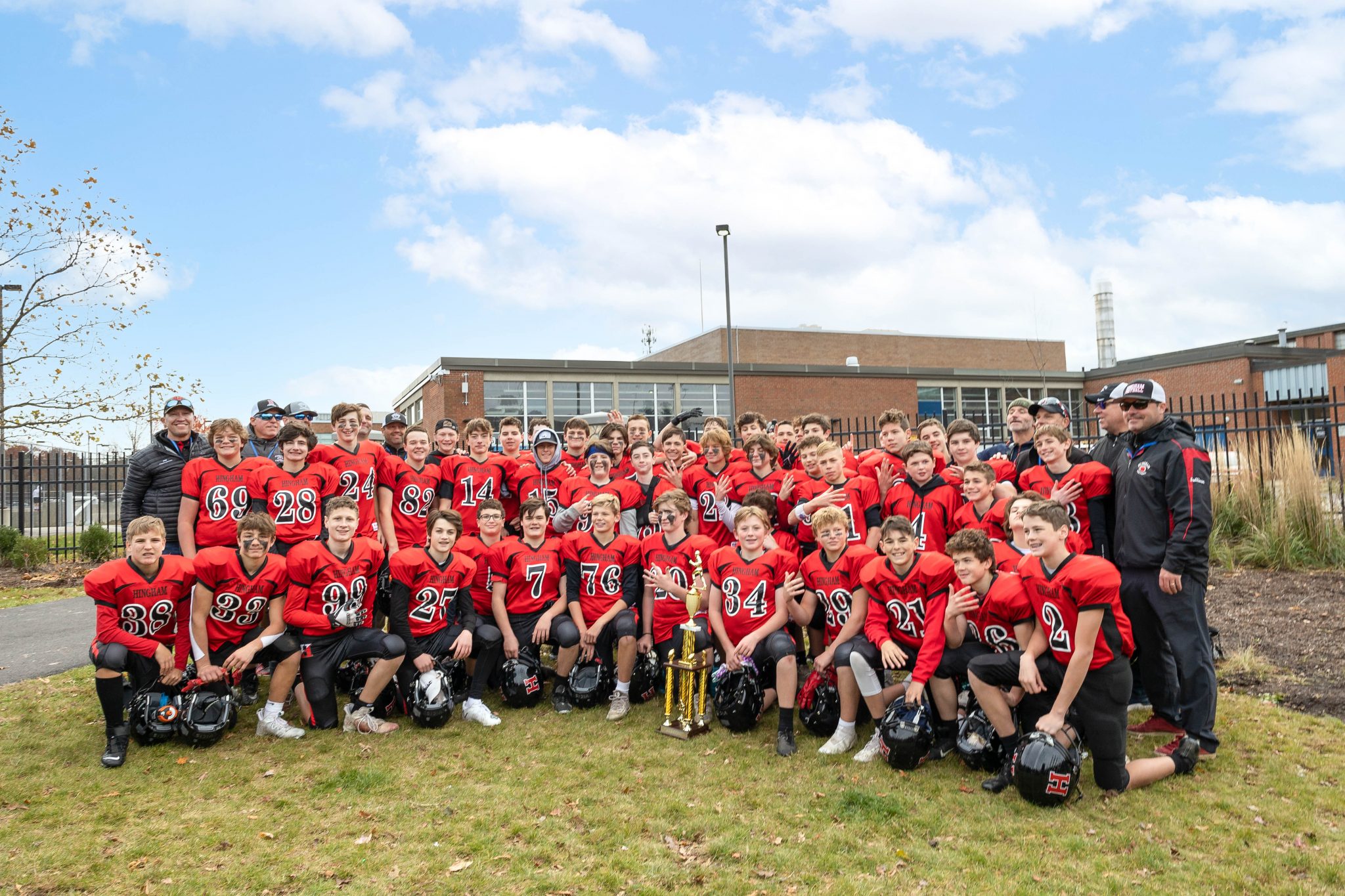 It’s fair to say this team has been a dynasty throughout its 6 years in youth football by winning five consecutive OCYFL league Super Bowls. Certainly, a feat no other Hingham team has accomplished. This win meant a lot, as it was the final game for this tight-knit group of young players, who defeated Bridgewater 35-6 for the fifth time, after an undefeated season.

The mantra of this 8th grade Raiders team has always been “the most important game is the next game.” This Sunday was a statement win as the offense dominated and the defense constrained Bridgewater to do their job and win the championship.

Taking the opening kickoff, Bridgewater looked like they were going to return it to the house when Jake Varholak tackled the returner at the 10 yard line. With their backs to the wall, Aedan Milligan, JT Reale and Cam McKenna tackled the ball carriers to force a 4th down, where Bridgewater eventually hammered it in for a TD and the 6-0 lead. It is was only for a brief moment that the Raiders would trail, as QB Jake Varholak on 4th and long completed a pass across the middle to Ian Smith who shed two would-be-tacklers for a 41 yard TD. On the point after, Varholak found Cavan Nicholas in the corner of the end zone for the 2 point conversion to retake the lead 8-6.  A lead which they would never relinquish.

The Badgers rushing attack was fierce, but was met with gritty force as Chase Beighley, Cam McKenna and Mac Corey tackled the ball carriers and Andrew Sullivan pressured the QB and batted down a 4th down pass to force a turnover on downs. Looking trapped, QB Varholak followed blocks from Charlie Shape, Leopold Kuehberger and Wyatt Averett to scamper for a 36 yard touchdown and a 14-6 lead at the end of the 1st quarter. The defense crushed the Badgers next drive with line penetration from Eli Melendes and Matt Griffin as Chase Beighley, Aedan Milligan and Drew St Pierre tackled the ball carriers securing a 14-6 lead at halftime.

The Raiders picked up right where they left off at the half, showing their muscle on both sides of the ball as QB Varholak connected with his solid target Ian Smith for a 39 yard TD pass and a 22-6 lead. Hingham owned the third quarter as their defense began to smother Bridgewater. Charlie Shape sacked the QB for a loss and on the next play safety Deacon Evriviades lept and tipped a pass which Drew St Pierre intercepted and returned deep into Bridgewater territory. Riding the momentum, Drew St Pierre caught a short pass from Varholak and turned it into a 38 yard gain setting up a first and goal. One play later Varholak followed his blockers Sullivan and Kuehberger for the TD. Back on offense and doing what he does best, QB Varholak scrambled and connected with an outstretched wide receiver Deacon Evriviades for a spectacular TD reception to take a commanding 35-6 lead. 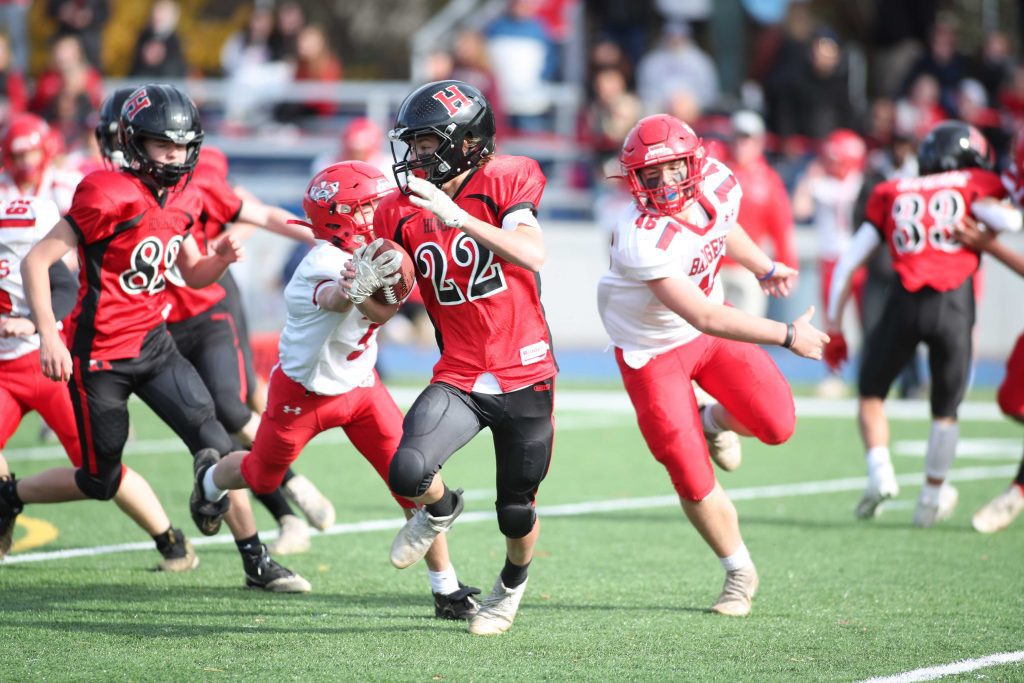 Ian Smith out runs the defense on a carry. 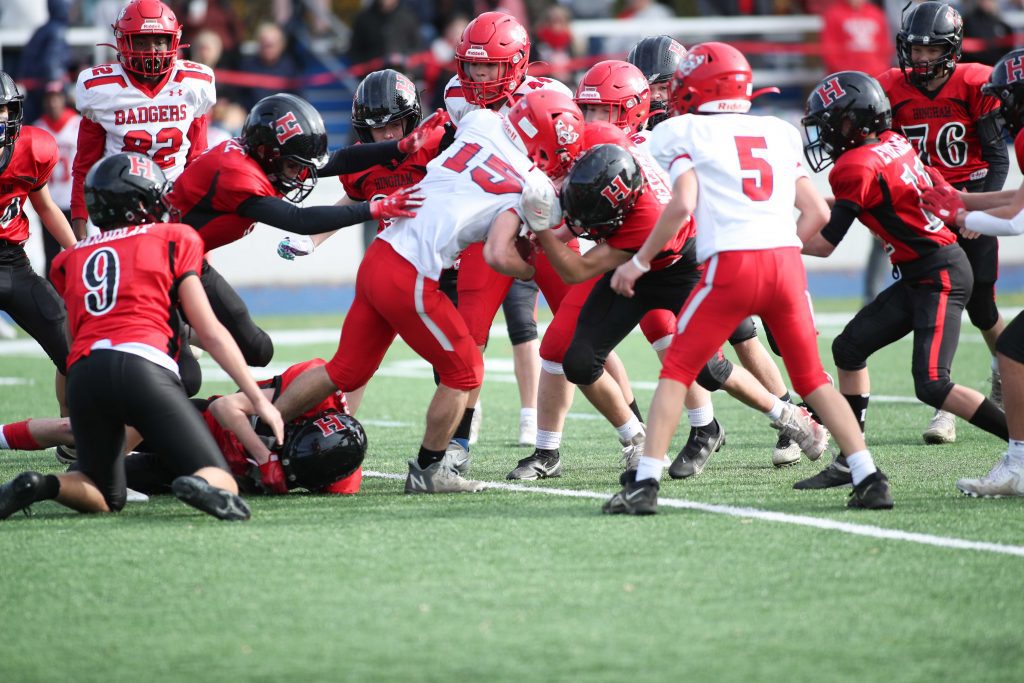 Group tackle by the defensive line. 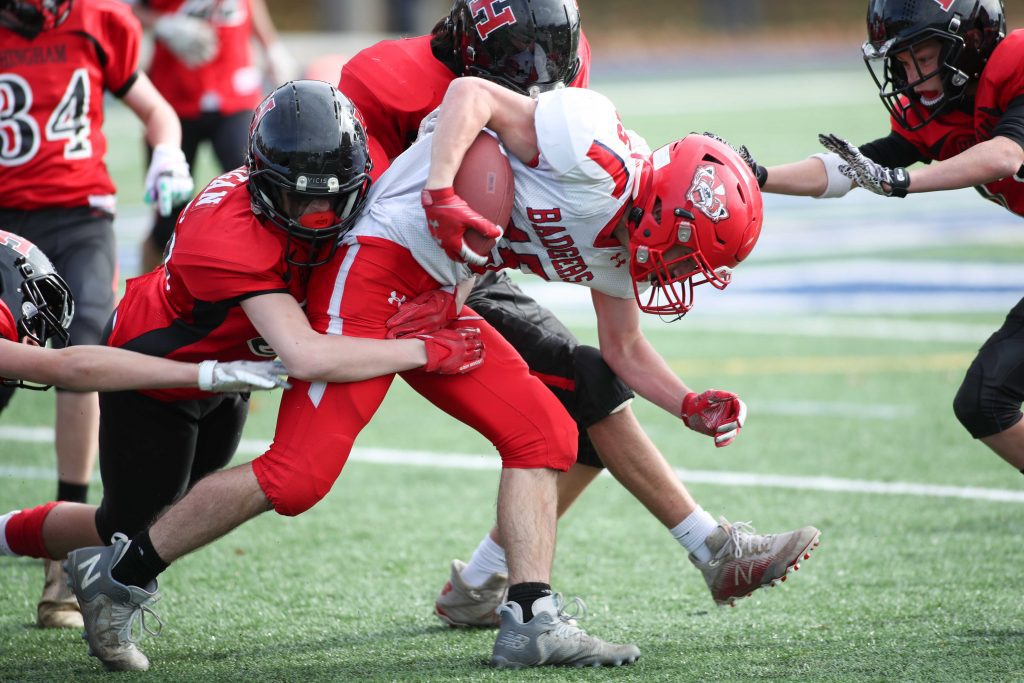 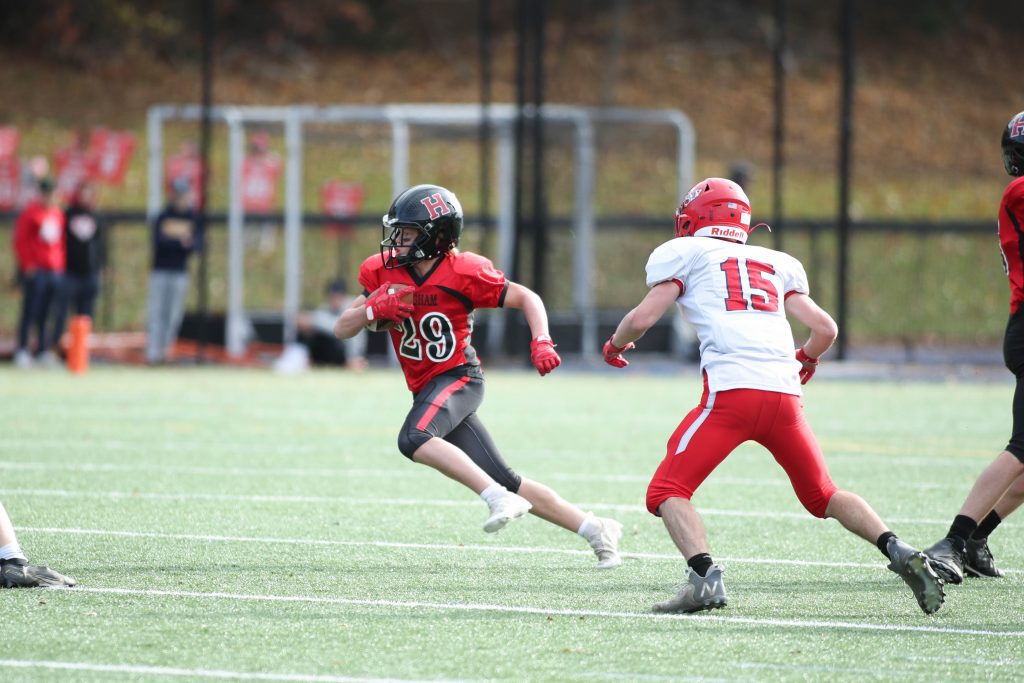 Chase Beighley cuts across the field in the first half. 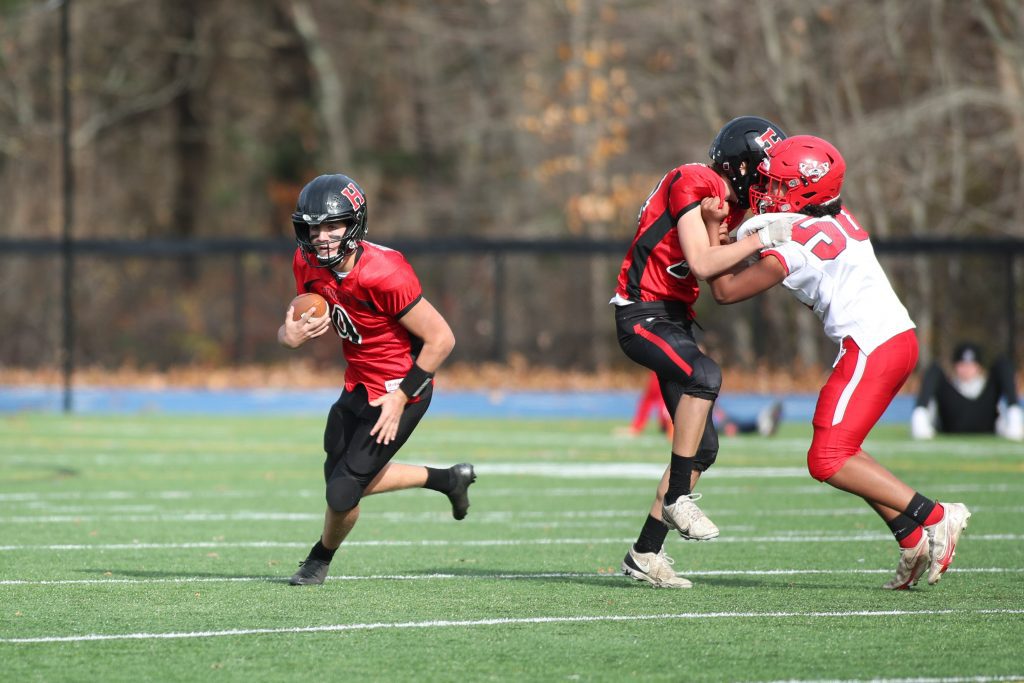 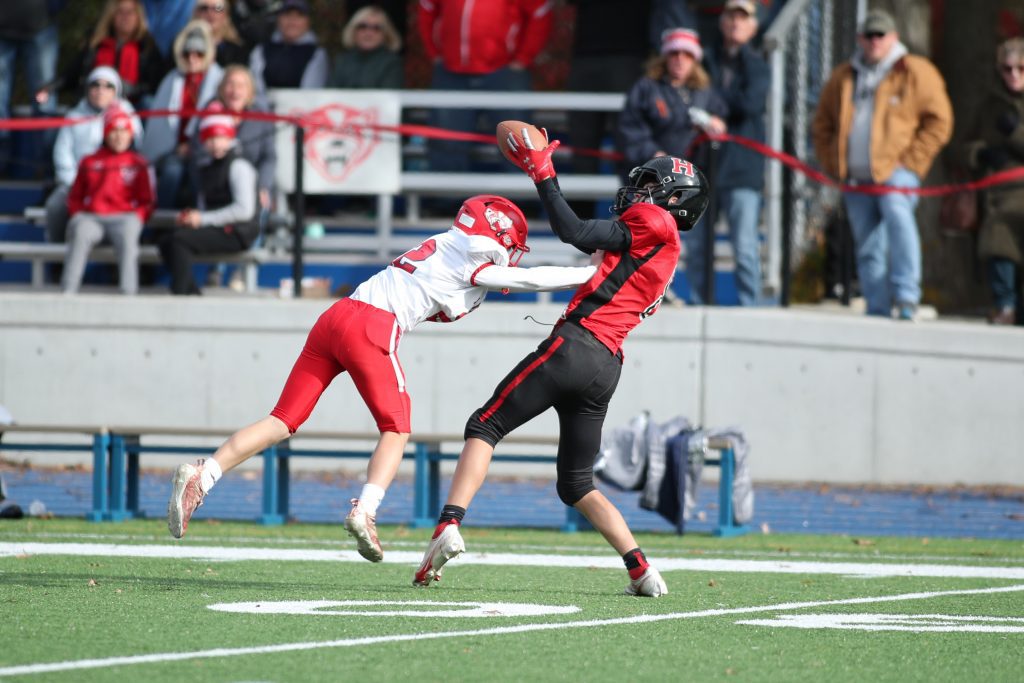 Jeffrey Reale almost makes the catch while being pushed to the ground. 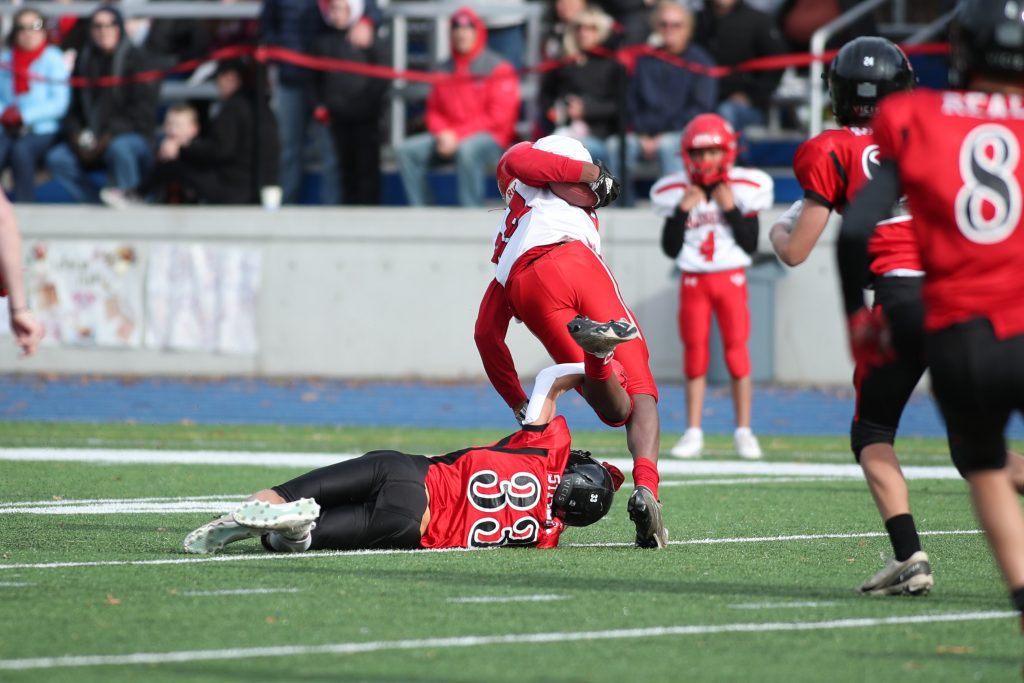 Drew St. Pierre with the diving tackle to stop a big run. 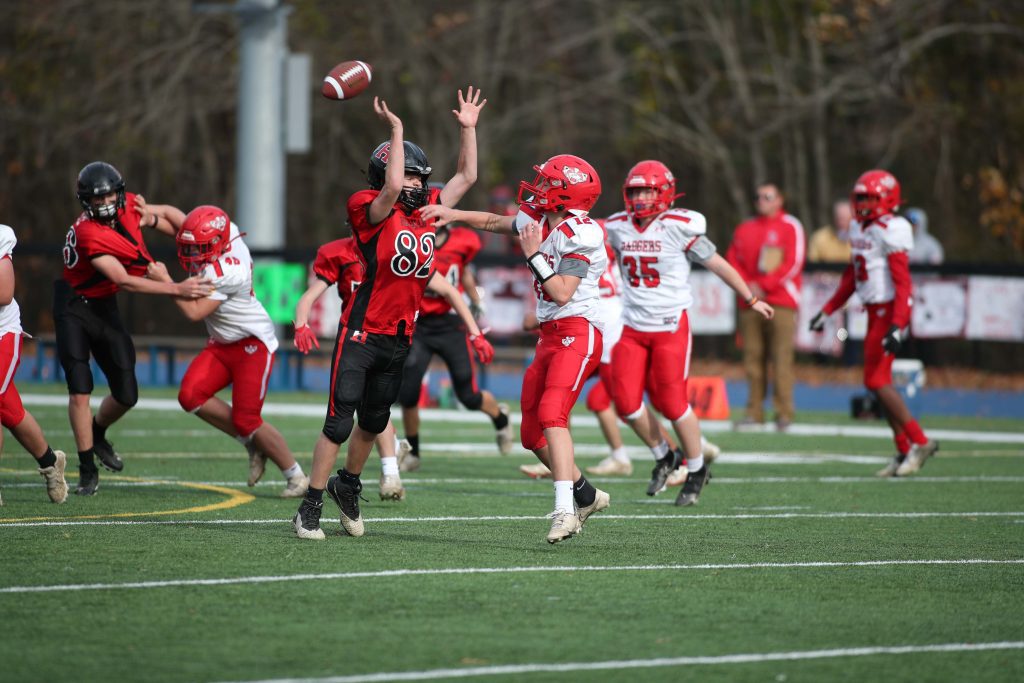 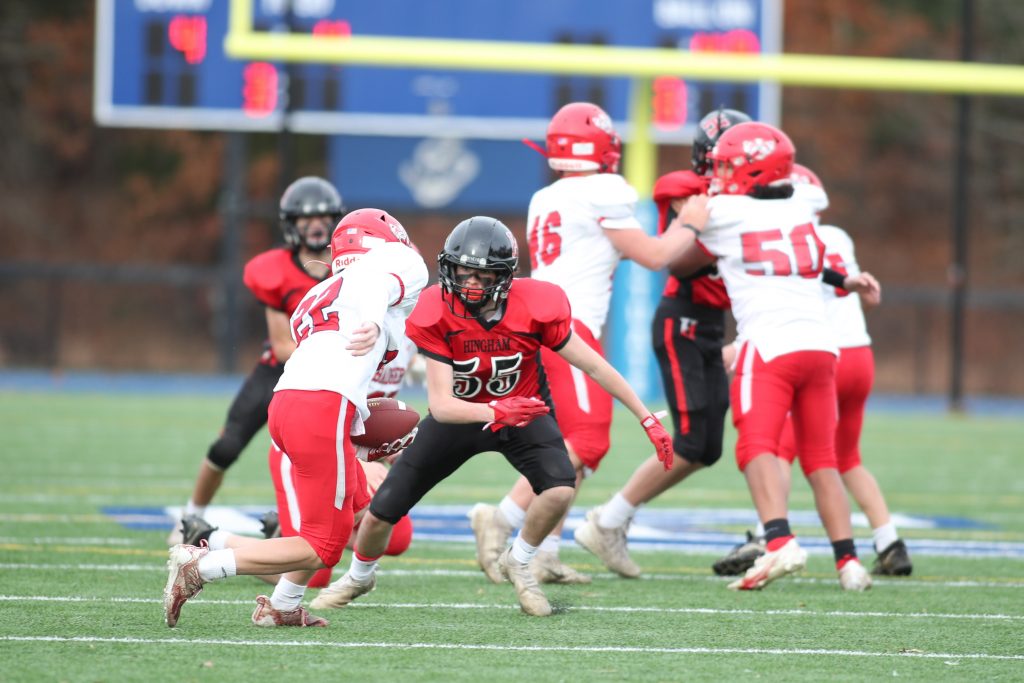 Aidan Milligan busts through the line to stop Bridgewater at the end of the first half. 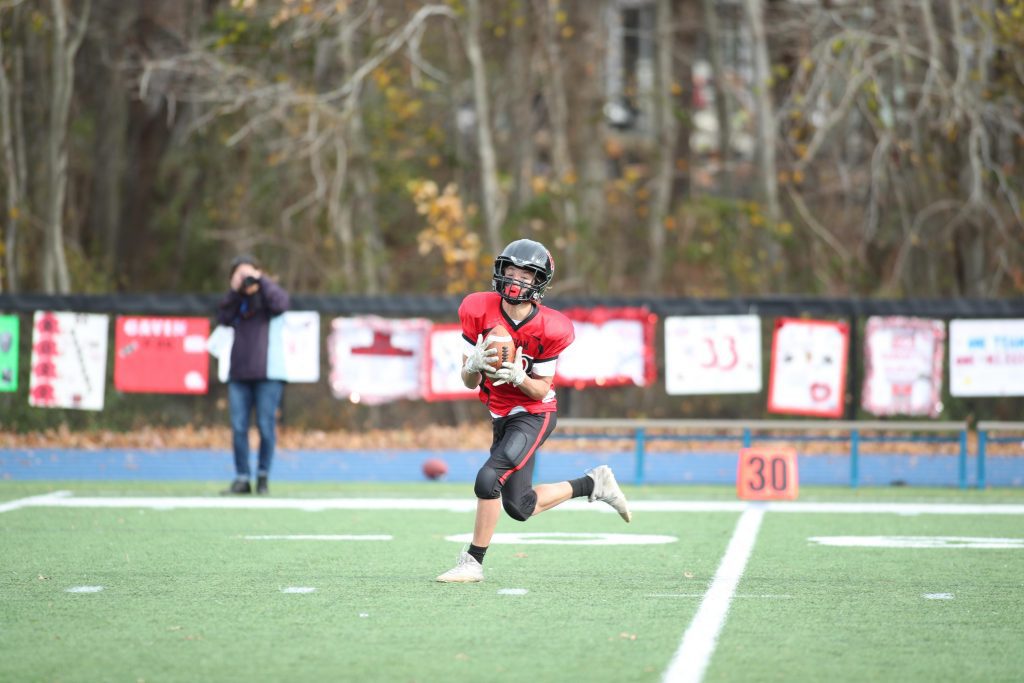 Deja vu! Ian Smith with almost an identication touchdown to open the second half. 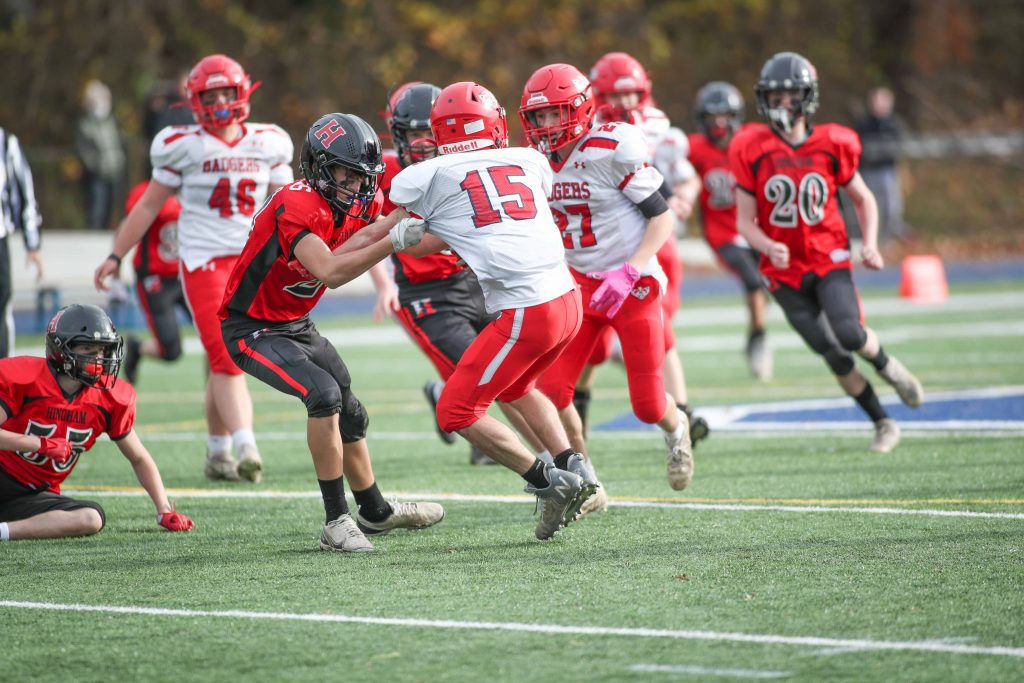 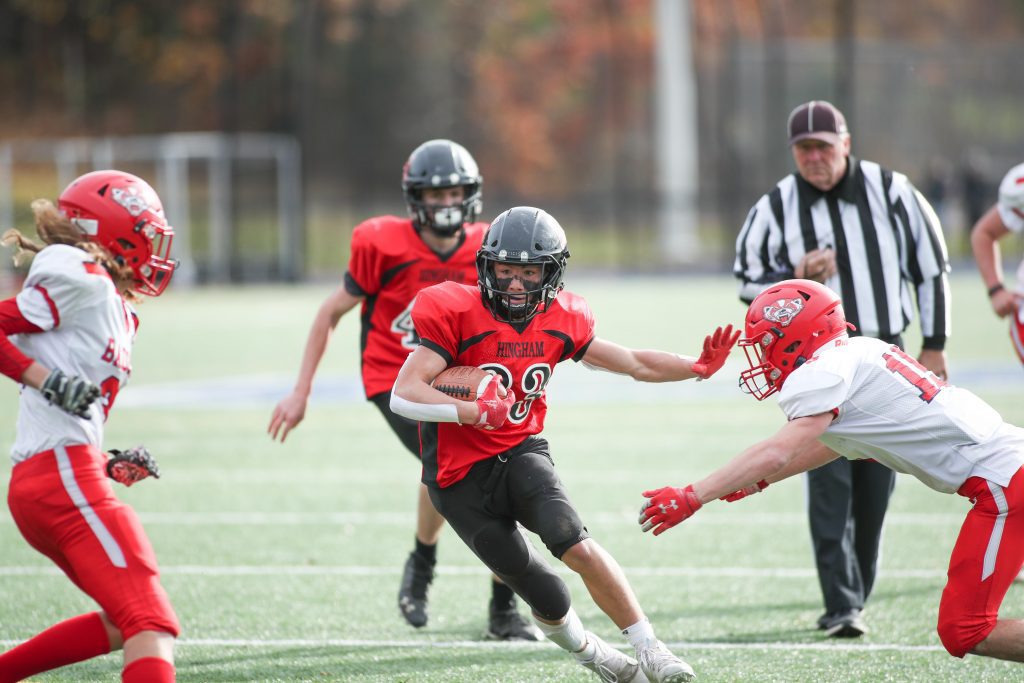 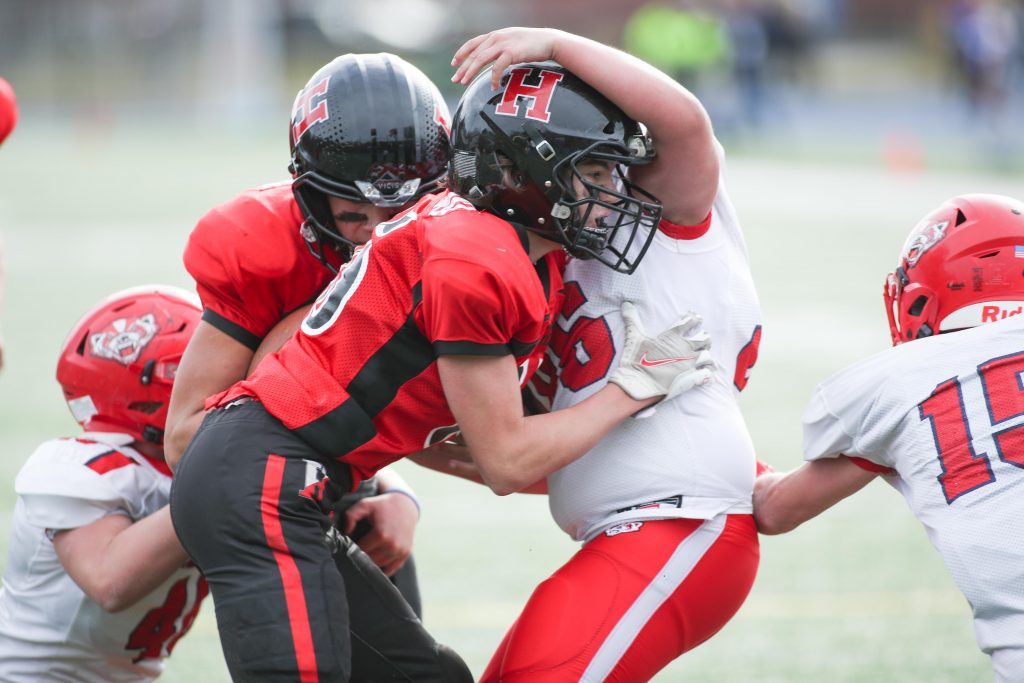 Jake Varholak runs behind his lineman's blocking for a TD. 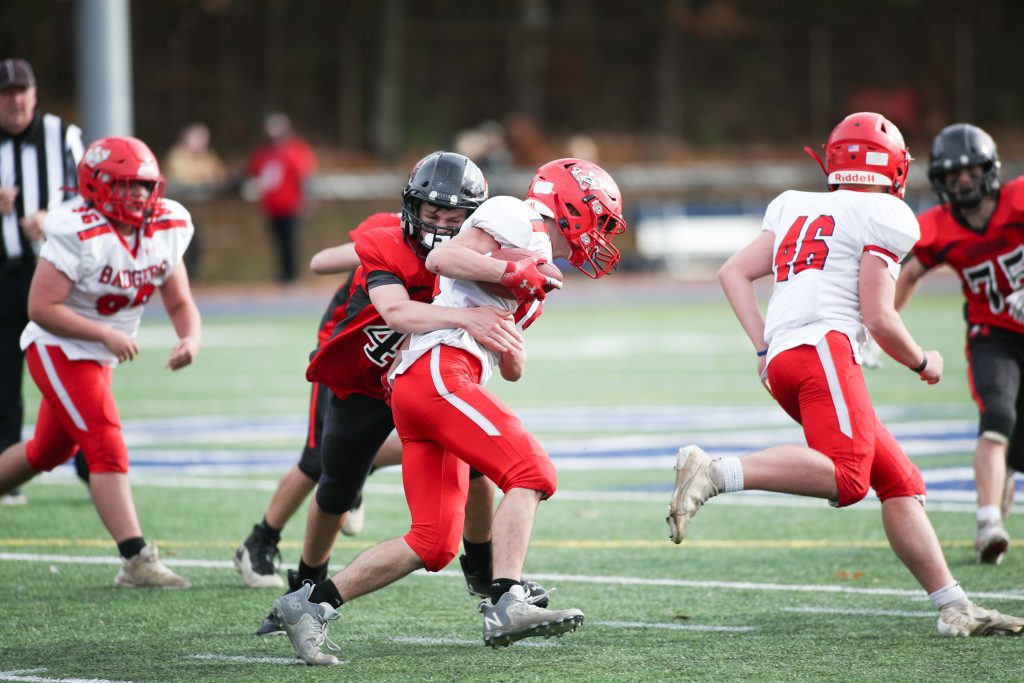 Charlie Shape with a tackle on a kick-off. 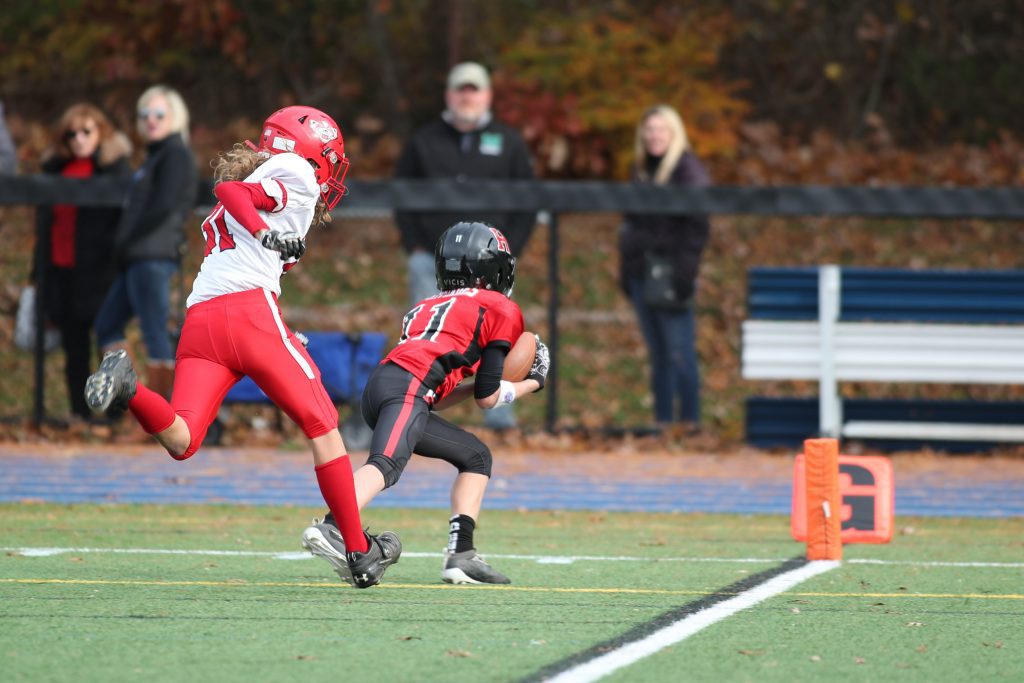 Deacon Evriviades stretches out for a late touchdown to put the game out of reach. 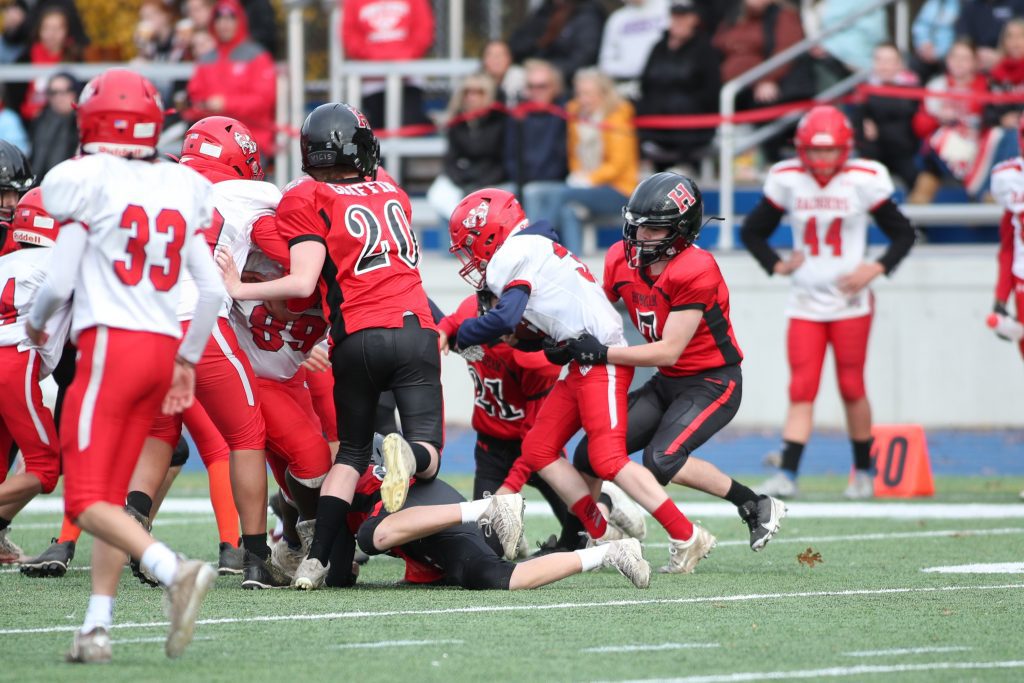 Liam Rodgers with the tackle behind the line of scrimmage.